It all started in the spring of this year, my good friend and riding partner Kris Yip bought a gravel bike, now I have owned a pretty decent gravel bike for about 6 years, riding lots when I first got it, thinking this is the next big thing. Which it was but I was a bit ahead of the curve and could not find riding partners, you see, venturing off into the deep dark forest a long way from cell service by yourself is not prudent. So my gravel riding was reborn now Kris was into it too!

Pretty soon after I started riding again I got the opportunity to purchase an amazing 3T Exploro. Racemax, a very fine racy gravel bike indeed!

We put in some pretty serious training rides as we had both signed up for the Okanagan Graveler, a two day stage race at Big White at the end of June. These rides on local FSR’s around Prince George were both fun and demanding, some as big as 200km in a single ride. The legs started to feel pretty good, the road bike was cast aside, as was the mountain bike, gravel was just way too much fun!

As part of our exploration into gravel racing we signed up for the Okanagan Graveler. It was a brutal race, ridden in harsh conditions (rain and snow) on bike wrecking trails, but still fun, we both wanted more, we had heard about the BCBR Gravel Explorer and signed up.

The organizers of the event had been very secretive about the exact stage details, they stated this was to prevent pre-riding from taking place and to try to level the playing field for non-local racers who have no experience of the terrain here. The courses were now released, and the five days consisted of a total of 368km with 7378m of climbing!

The course was front stacked, that is to say, the hardest days were the first two, with stage one being particularly brutal looking with 93km and 1731m of climbing followed by 79km and 1530m of climbing on day two. This was going to get nasty really really quickly!

The start was neutralized, then the pace motos pulled away at the bottom of the steep climb, but the pros kept it at a controlled pace of about 350w up the climb, I guess they fancied a relaxed warm-up! So good so far for me. It was a narrow road up the rough and cut up pavement out of Naramata to the benchlands above, winding our way through orchards and vineyards. When would all hell break loose?

The lower levels of the KVR here are a false flat uphill and it is very sandy interspersed with areas of babies’ heads, as you progress away from the tourist areas the trail progressively becomes more gnarly. 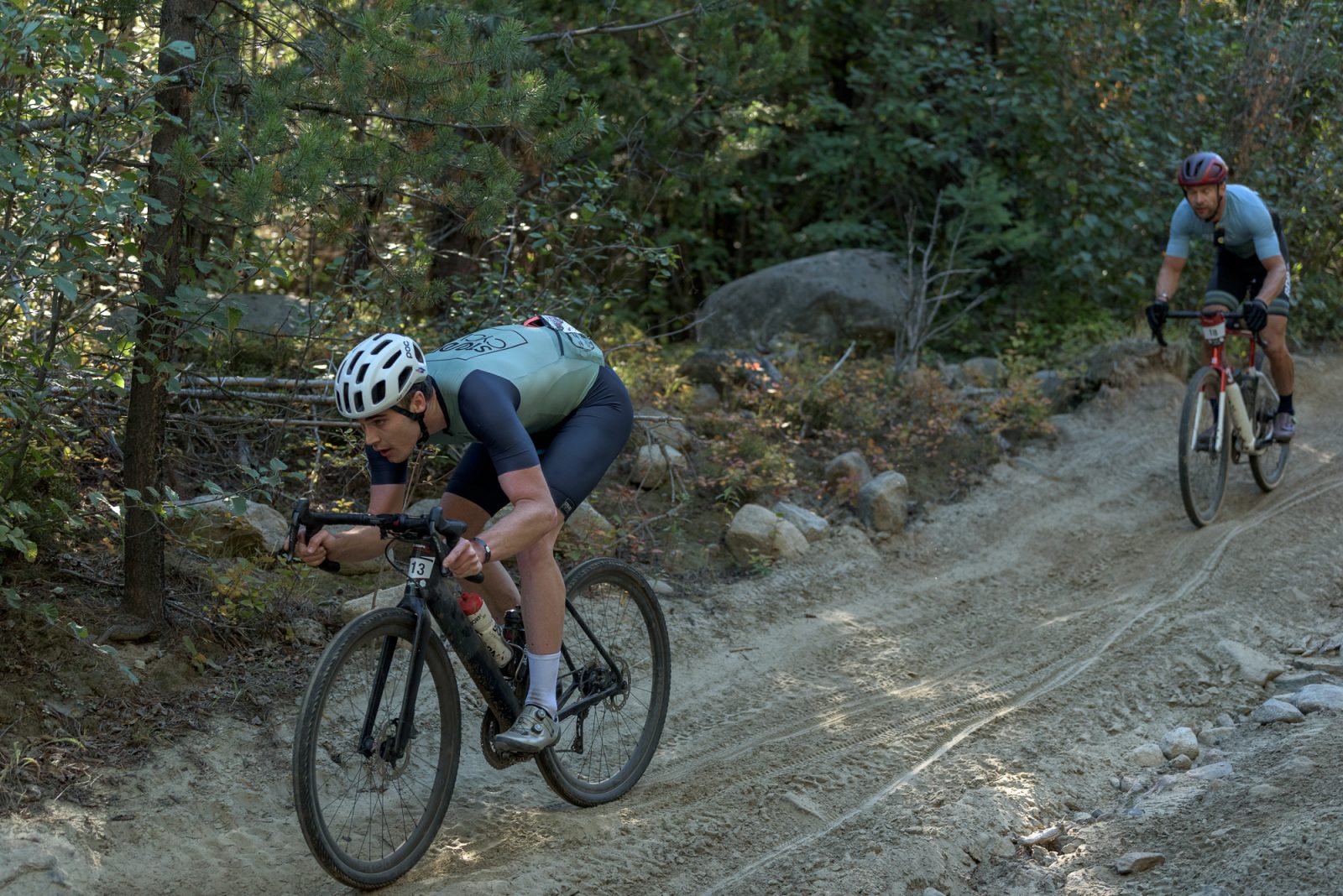 We quickly dispersed as we all found our climbing rhythm,  the legs were beginning to feel it! As we rounded over the top finally we could descend for real, the descent started as a fast downhill punctuated by small kickers, this was a lot of fun and a welcome relief after all the climbing done so far during the stage.

The joy of descending soon turned to absolute terror as the pitch steepened and the track became a morass of loose cannonball size rocks, interspersed with deep sand pockets and gullies cut by storms.

Once again thankful, to have Kris there with me so we could share the workload to the finish line we pushed hard, reaching speeds up to 45km/h. We caught and passed a few and buried ourselves to the line, crossing together. 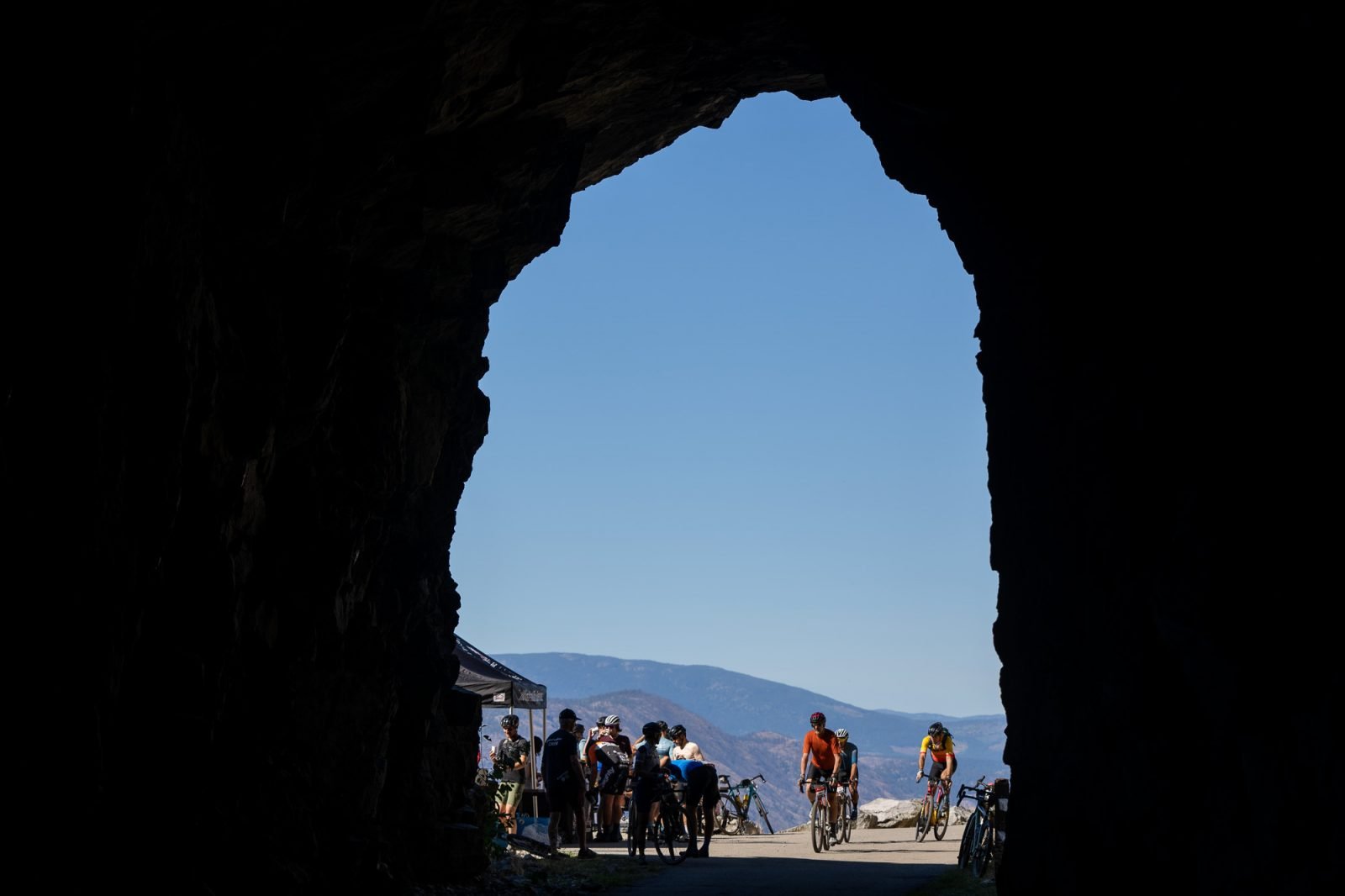 Starting at the rodeo grounds just outside of Summerland the route for stage 2 looks pretty similar to stage one, and it had many of the same characteristics, loose steep trails going up, deep soft sandy sections and rough steep downs. Was I going to be a marked man today? I was now wearing a leader’s jersey!

We started out again in soft warm morning sunshine, heading up a popular section of the KVR trail. It was a fast start, gently climbing up to the first real climb some 14 km in. I came unstuck twice in this “easy” section, with my front wheel washing out both times at slow speed.

I didn’t think I would be so pleased to be going back up again, but I knew I could put some time again into my pursuers, the next 14km headed mostly up, climbing another 500m, I pushed hard up every incline, I knew after this summit it was all downhill, I needed as big as a gap as I could muster to defend from these maniacal descenders.

Now I faced 750m of steep descent back to the more gentle grade of the KVR trail being chased by at least 2 riders, how far back I know not, let me tell you I ripped down this descent, it was a bit more in my wheelhouse, good sight lines, less rocky, still very technical with deep sandy pockets and rough sections but I felt confident to let the bike roll fast, that descent took just 25 minutes and no one caught and passed me. I in fact caught another rider and we teamed up to share the workload on the last 21km coming in together. I was more than grateful to have a partner to share this workload.

In summary stage 2 had not been a great stage for me, 2 early crashes, the second giving me the painful deep contusion, I dropped out of the top 10 in GC to 13th, losing some time to others around me on the first day, my main success being the ability to hold off my pursuers on the descent. 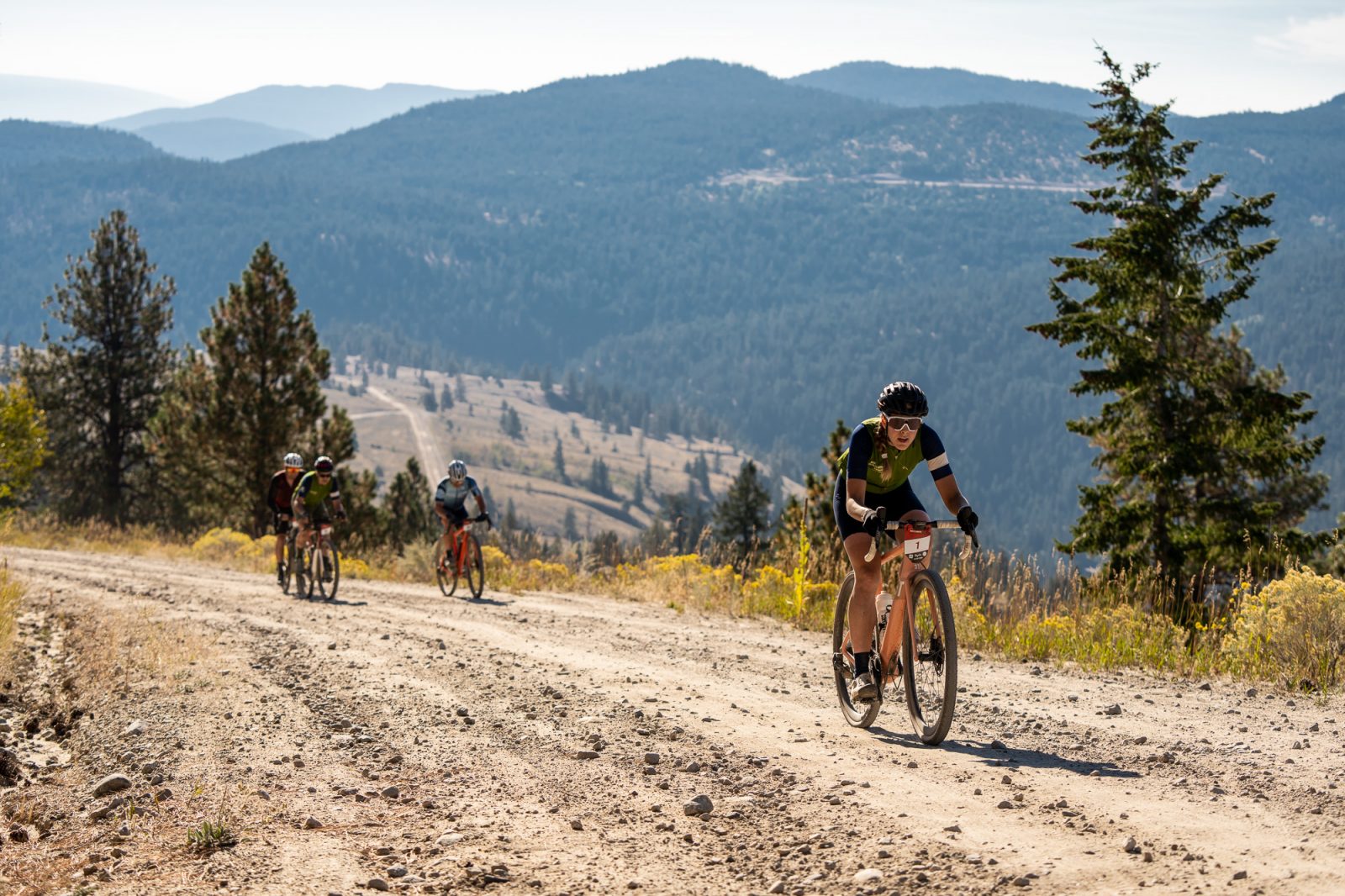 We moved to Okanagan Falls for the scenic start of stage 3, again another perfect late summer day, we had been promised that the first 2 stages were the hardest, that things would get easier, looking at this stage after the obligatory neutral roll-out we had a continuous 25km climb with 1350m of elevation gain, easy they said, I can still hear them laughing.

The group I was with were setting a fierce pace, I was anywhere between 320 and 340w just to stay with them, higher than I knew I could maintain for nearly 2 hours, after about an hour I elected to let them go and settled into a more sustainable pace, just south of 300w.

Things coalesced into a group of 4 rolling over the top. Familiar faces, now we were 3 days in the peloton, naturally sorts itself into riders of similar abilities, friendships and alliances are born of these selections. We were now facing a rolling 20 to 25km until the descent back down the same smooth logging road began, a little more down than up, the descents were not too technical, just plain old fast, the only obstacles being obstinate Aberdeen Angus cattle, I was “herding” four of them ahead of me trying to get them to pull over with some colourful verbology, when out of the corner of my eye I saw a racer pulled over, bike upside down, tube being inserted, I was so distracted by my bovine honour guard I was late realizing this, late offering help and then late in realizing it was my mate Kris. His bad year with punctures continues! Finally after a kilometer or so the cattle found an escape, successfully dodging their deposits and persistent flatulence was a relief.

This parcours was billed as an exploratory one, and this meant we ended up on some very rough deactivated trails, derailleur snapping sticks were as much of an obstacle as the prolific stones which appeared to have been specially crafted by artisans with an eye to efficient sidewall shredding. 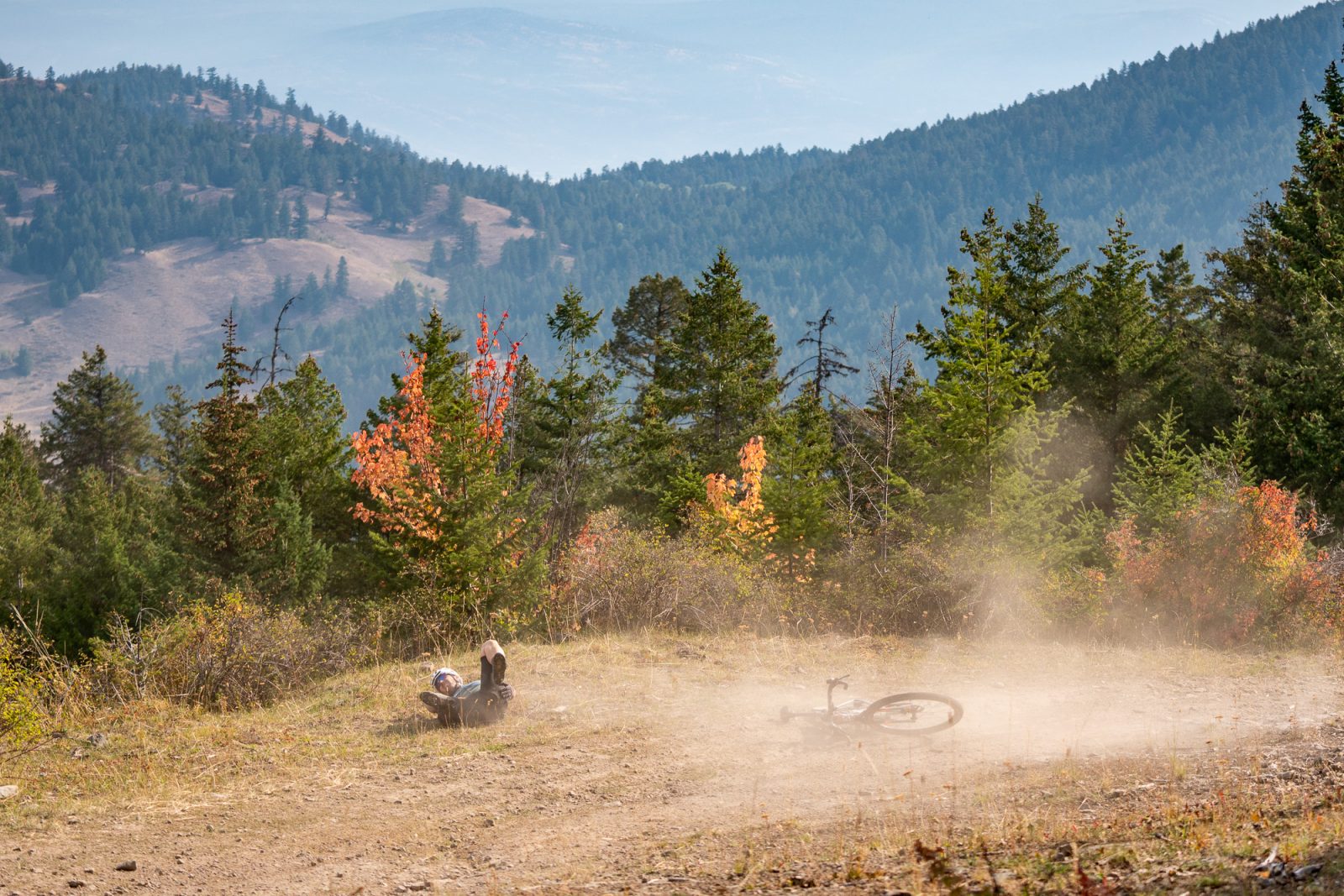 After ascending “the wall” as it has been labeled, a short but ridiculously steep and loose hike a bike section we hit the final descent. At a vertical drop of 250m it wasn’t the largest descent and it took just over 5 minutes but this was perhaps one of the wildest white knuckle sections of all, a rainwater rivened FSR where line choice was paramount, the gunnels running straight down and sometimes across the slope with bottoms filled with sand and rock, the tops and sides hard baked dirt, it was like riding a skinny in many spots, then a bunny hop or two over a mini canyon, navigating lines at high speed. The finish came up really quickly, and that was a relief!

The final day saw us return to the Summerland rodeo grounds, the weather continued to be very nice, a little more of a high overcast day today, perfect weather for this most perfect of events.

This stage was a beauty, with the same start and finish as day 2 and some of the same routing but in reverse. 74km long and 1278m of climbing to cap off a great week of racing. No massive leg-breaking climb right at the start, a climb for sure, but comparatively short and mellow and mostly on blacktop and smooth gravel, this transitioned to a fast section of rolling gravel road. 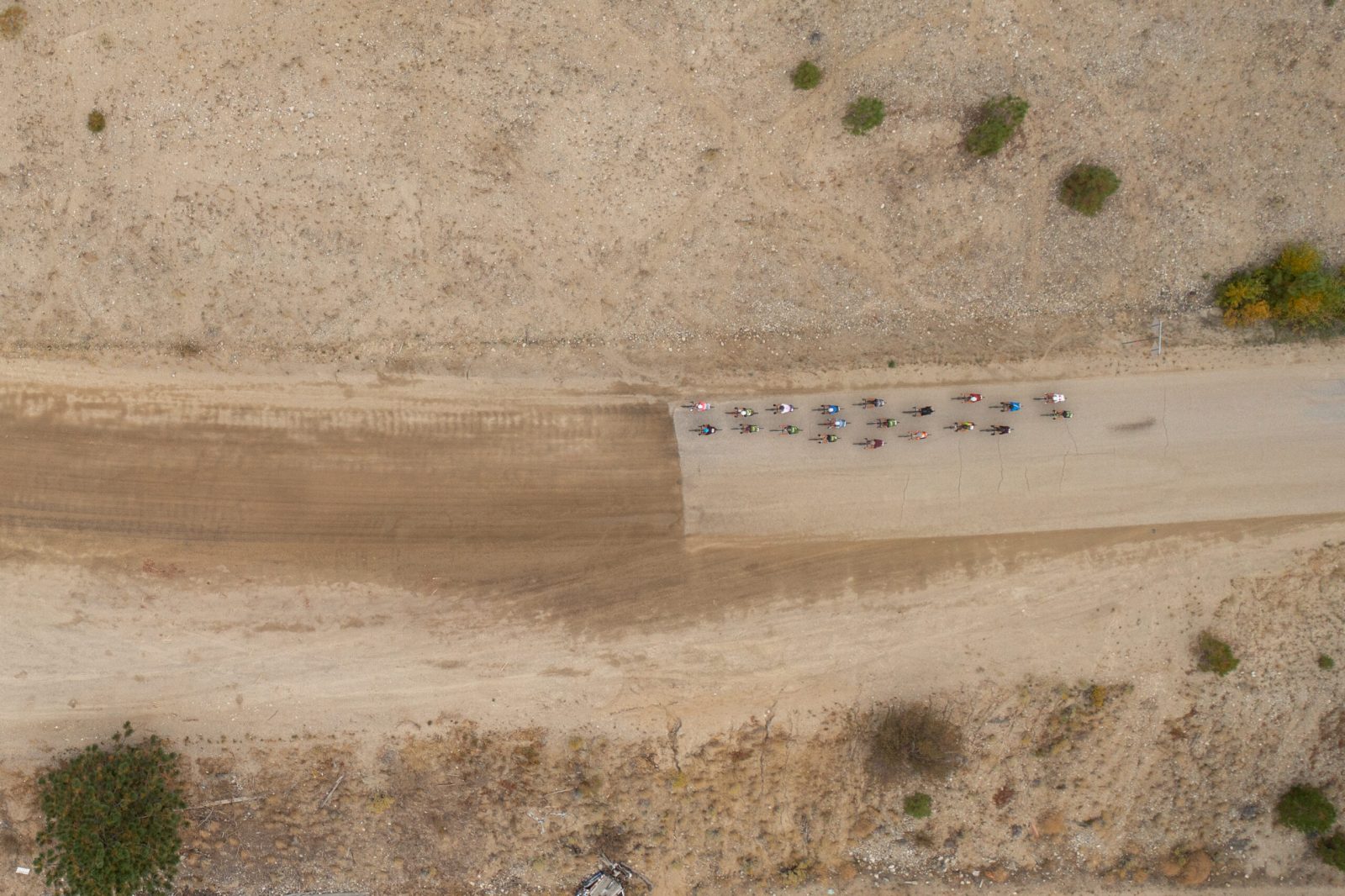 The next 8 km were pretty much rolling terrain, with a few bumps and a slight hill before we started descending, over the top of one of the rollers was the feed station, now every stage has had at least one feed station, I had yet to indulge in their hospitality, always wary of time lost. For today we had been promised a special treat, who was I to resist? So I took a precious 10 seconds out of my stage and enjoyed a hearty slug of some very sweet and welcoming whiskey, well worth the stop!

I was pushing hard up all the small hills, hoping to open up the gap on my pursuers, of whom I had caught fleeting glimpses.
The descent started quite steeply but smooth enough to let her go, the only obstacles being the frequent texas culverts, those annoying open ditches cut across the road bed, on a few of those I definitely caught air!

As we closed in on the last few km the alliance broke apart as we all started to think of our stage results, one of the riders put in a huge attack through a short section of single track, the guy I was behind let the wheel go.

I jumped to try to close the gap, getting so close over the next 3 km, but never quite making it, I was being chased too, and this made for a thrilling and hard last 10 minutes of the race. The finish could not come soon enough!

Oh yeah, those results! I am proud to have made the top ten on overall general classification with a total race time of 14:57:40, just edging out Cynthia Frazier, the 2022 female winner of Gravel Unbound XL! I did secure my first place in the 60+ division also proudly beating all the 50+ entrants by over 51 minutes.