Spontaneous trips are usually the best.  Such as this one, which started with an invitation to attend a hotel opening party in Croatia.  Initially, it appeared that I could not go because of work commitments, but they got canceled just a couple of days before the event. I quickly checked flight back options and the next day hopped on an early train to Graz, Austria.

Graz welcomed me with 35 degrees Celsius and a malfunctioning r shifter. I thought the cable tore apart, but it was not the case. I had to find a bike store willing to look into the issue on Friday afternoon.  Luckily, the Bicycle store at Körösistraße offered to check it midafternoon. In the meantime, I drank a few coffees at Maghanoy Bike Boutique. Quite unexpectedly, Misa with her Exploro, stopped by on her way up north. 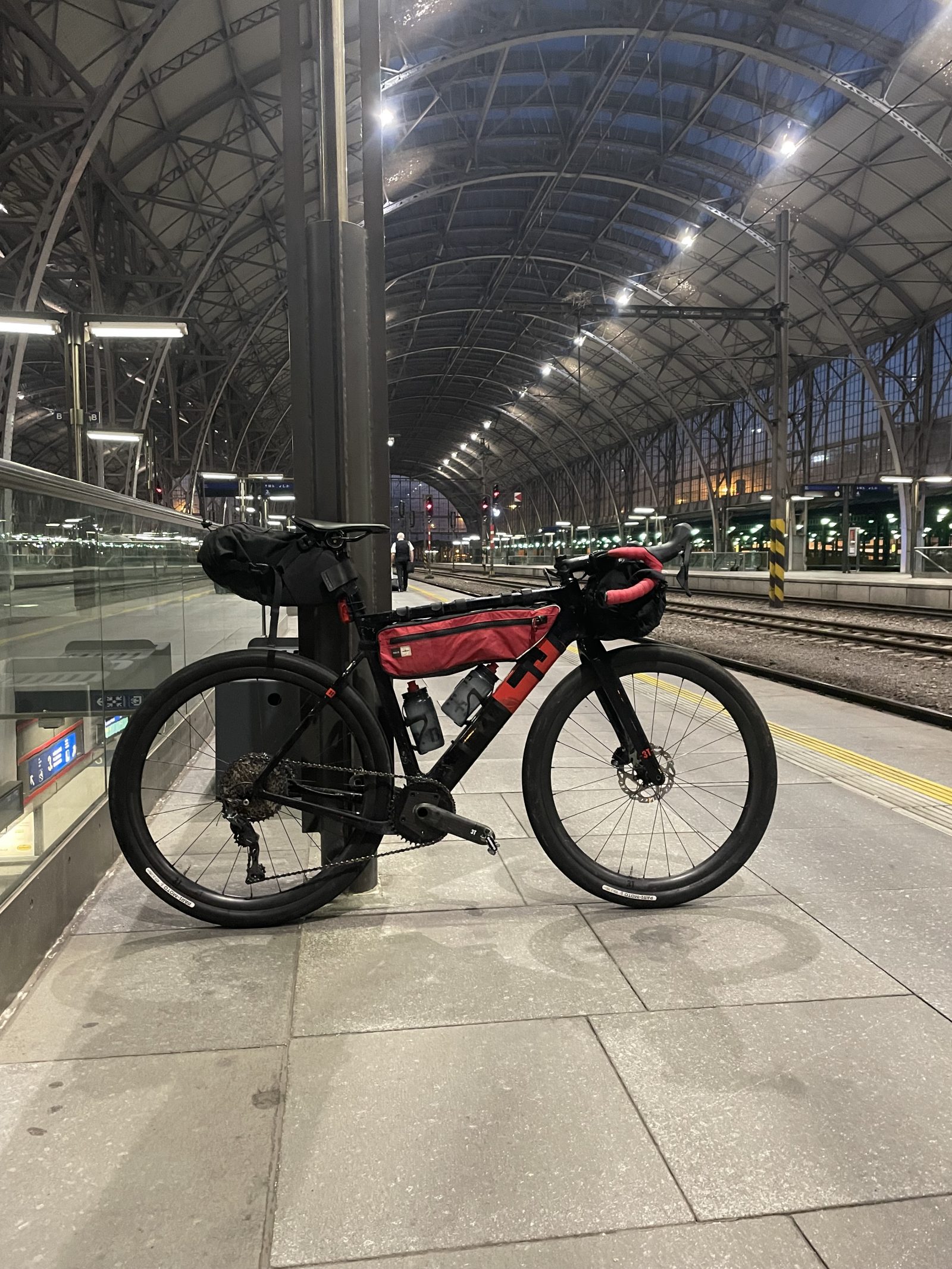 At 16:00 I was ready to go set off southbound towards Slovenia. The first 50km flowed around the Mur River, up until the Slovenian border, where I had to hop over the border ridge. The rout continued through the lavishly green vineyards up to Maribor. In Maribor, riding through the city was surprisingly good given well designed cycling paths. After Maribor, I continued across the Slovenian countryside toward the Croatian border. I arrived at my accommodation just before 22:00 with 132km / 718m on the clock. 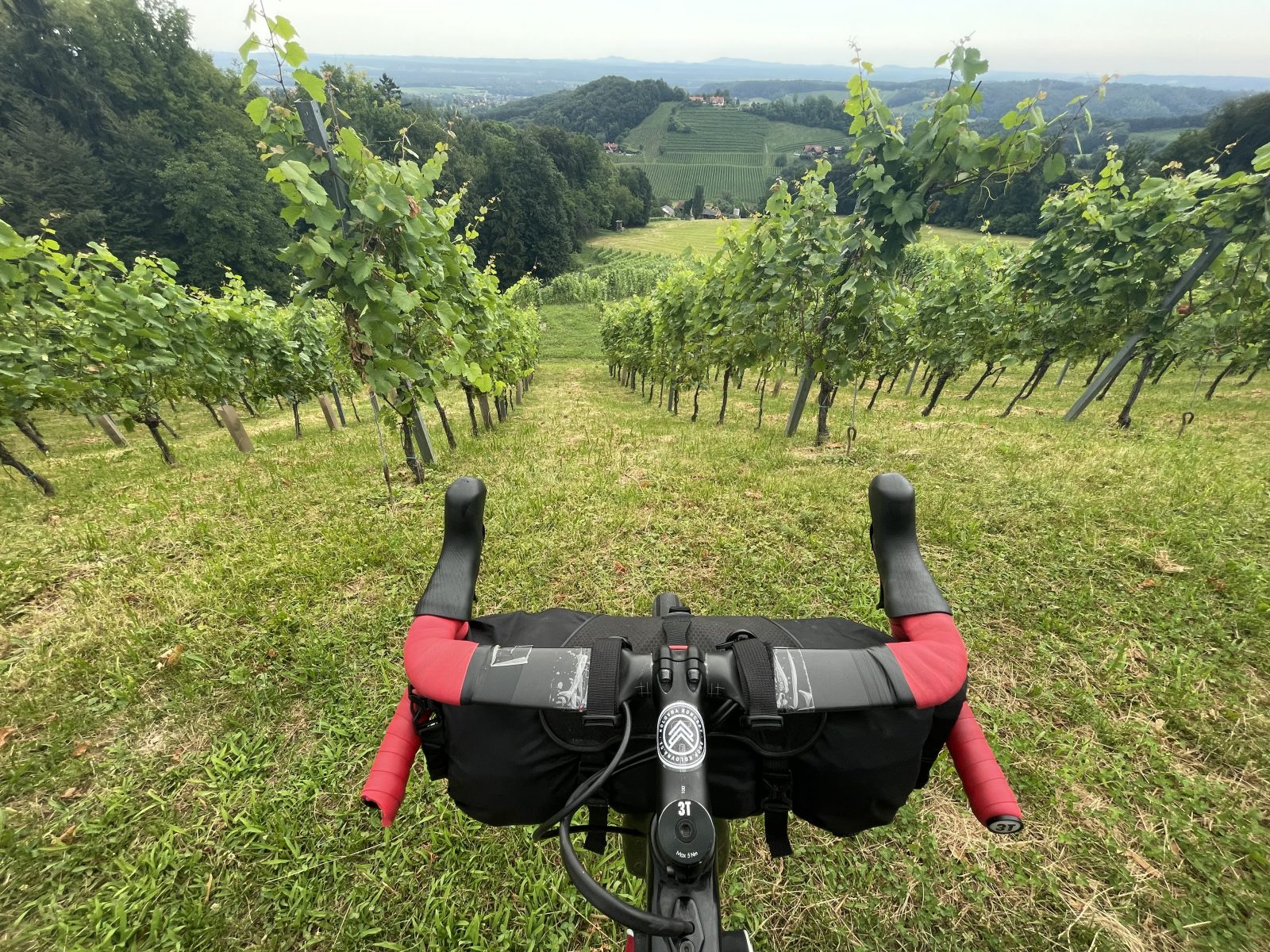 Saturday was meant to be a long day, with Bihac in Bosna as the final destination. I departed after breakfast around 8:00 heading towards Croatia. Pleasant green hilly surroundings continued even behind the border and some good gravel roads atop small rolling hills were a nice distraction. After a descent I crossed the Sava River via a local ferry and continued towards Karlovac. 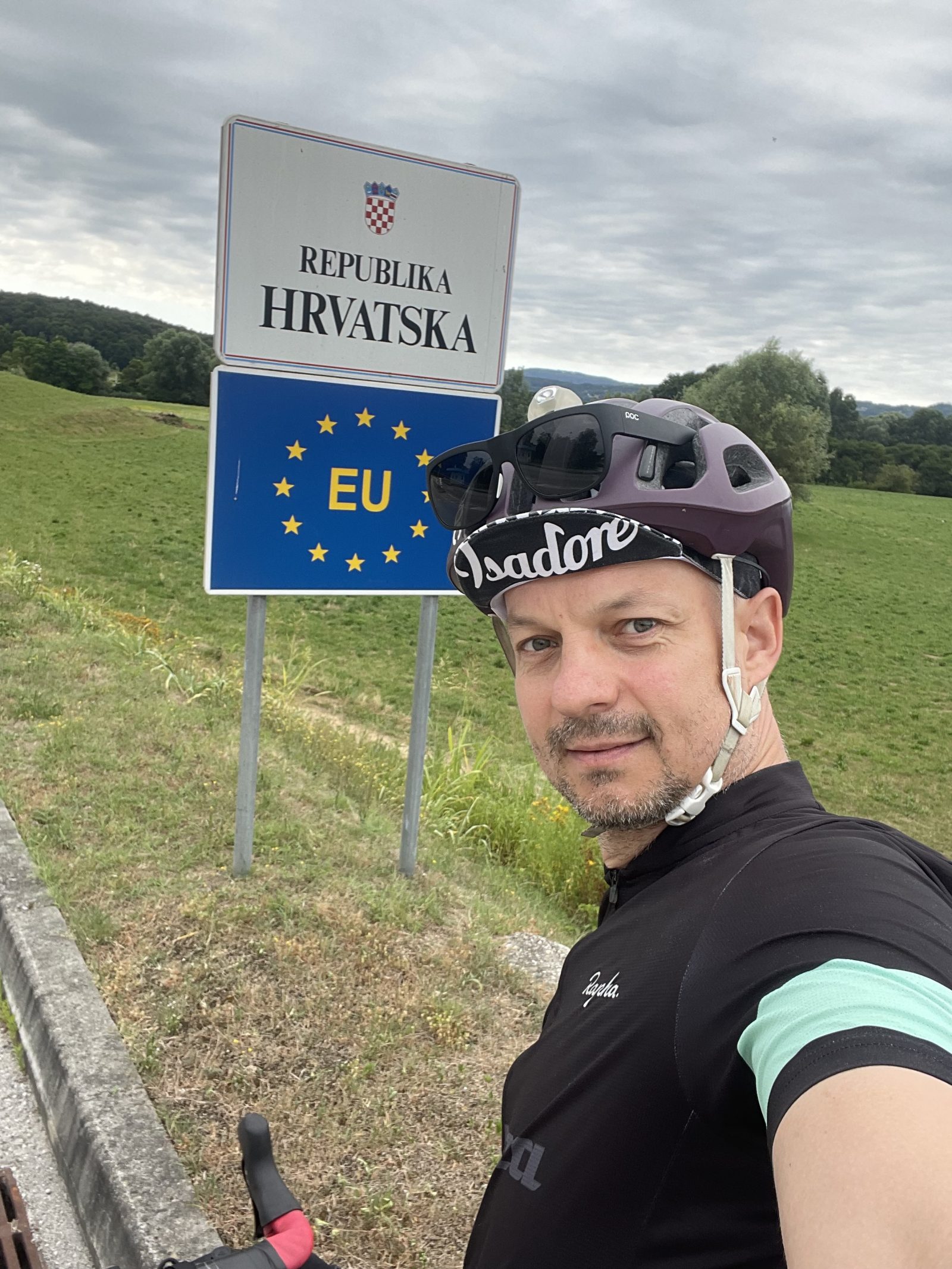 The temperatures started rising and the tarmac got slippery in the mid-day heat. I learned it hard way as my front wheel slipped during my Moto GP style cornering at a roundabout. I slid for a few meters, and it was probably quite spectacular since the scooter guy made 3 or 4 circles asking me repeatedly if I was OK. I checked the bike, bones and joints and slowly started pedaling again. The leg seemed to work so I stopped to clean and disinfect wounds on my left leg and arm. 400km to go, we are not football players, right? 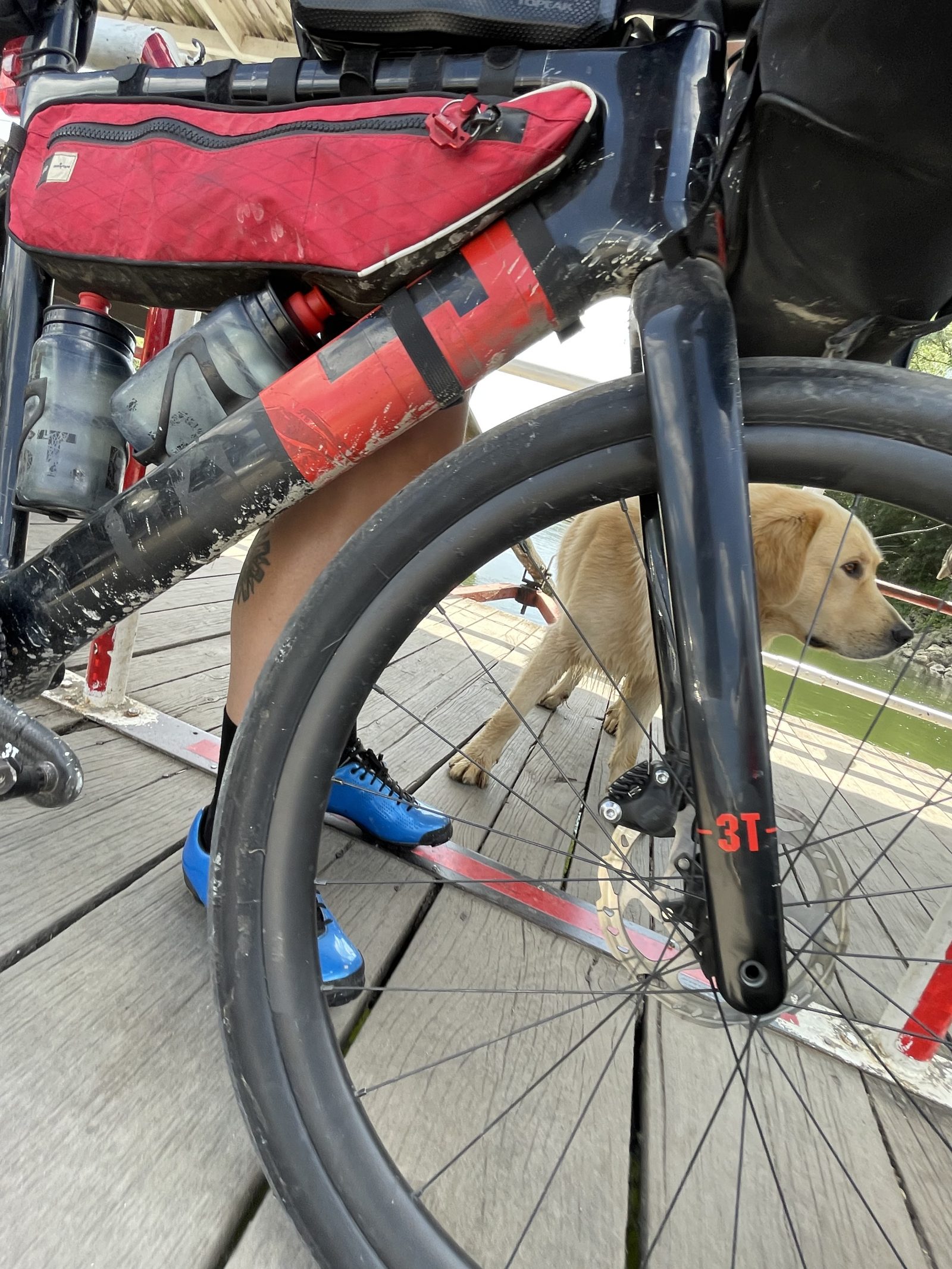 I took a lazy late lunch and Karlovac and started rolling in the direction of Bosna. The road I had to take was a former main road towards the coast and it was quite busy. Luckily, after 15km I turned left towards the Croatian backcountry.  The road gradually ascended with small hills reminiscent of Tuscany (minus villas, vineyards and tourists). The road quality was very good and traffic almost nonexistent. Around 18:00 with about 50km to go, I made a booking in Bihac.  I tried to rehydrate (waitress asking how many more friend I expect after I ordered 2L water, non-alcoholic beer, coke and two coffees) and started my descent towards Bosna. The last 30 minutes were mostly downhill, and I arrived just in time to catch the Saturday evening city buzz. The hotel was brand new, and the receptionist suggested I take the bike to my room. After a shower, I went for a dinner and observed the beauty of the old city and its people. Saturday counted for 217km and 1787m. 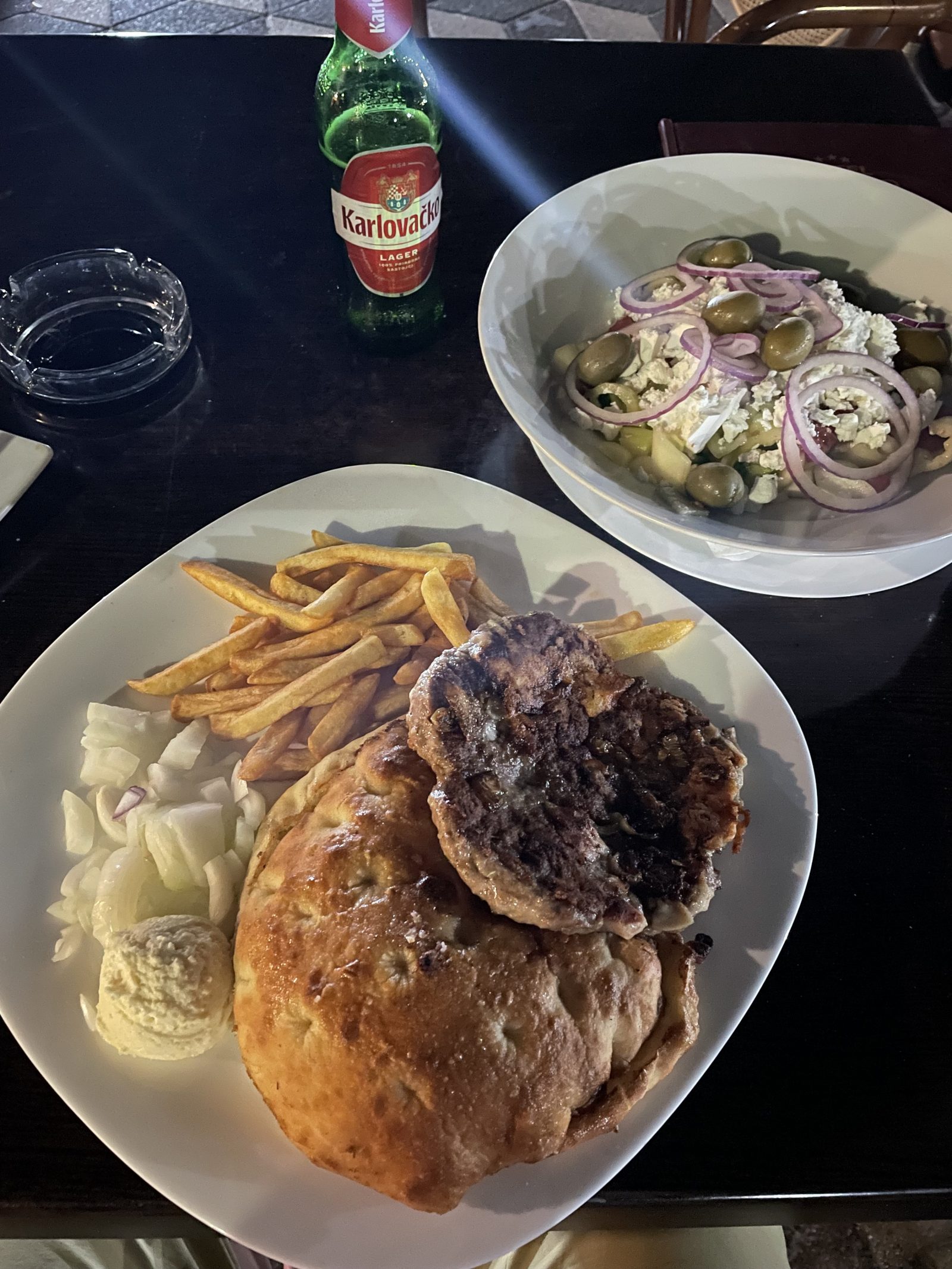 After a proper hotel breakfast, I packed my things and headed further south. Sunday was the mountain stage.  From the city, I climbed towards the entrance to the Una River national park. The climb was rewarded by fantastic downhill down to the Una River. I decided to take a coffee and snack at Kulen Vakuf town. I got quite nervous waiting for an hour to get a cheese burek while being assured it is coming in every 5 minutes. At least I had a pleasant conversation with Michal, a fellow Slovak outdoor enthusiast, whose wife is Bosnian. He shared great stories about Bosnian nature and the outdoors.

With a little time delay, I headed towards Martin Brod, with nice waterfalls and old bridges. Just before 13:00, I started the 30km stage to Drvar. The heat was unbearable, and the climbing road felt remote.  As the altitude rose, a tailwind picked up, and riding the plateau became more fun. During the descent I felt like diving into an oven. I was afraid that the brake’s oil would boil off. In Drvar I took fast food lunch, rehydrated, and set off towards the last climb of the day. The first part of 10 km meant 530m of ascend, followed by a remote hilly plateau, which felt like US West (remember Winnetou?). At 115km I stopped by Bosansko Grahovo, the last town before the border. Obligatory drinking ritual followed by a small climb towards the border ridge.

The downhill towards Strmica, a border town in Croatia was amongst the best I ever did (bike or moto). 20km of pure joy.  Initially, I meant to stay in Knin at 155km, but I had good timing and continued for another hour to Drnis.  175km and 2464m.

Monday was a breakfast affair, 70km, and 602m, with the ending in the port of Split. When entering Split, be careful of a tunnel with no light and cobblestones. It can be tricky and dark. Luckily I stayed rubber side down. At 11:15 I boarded the ferry towards Brac island and spent two easy / party days at the View Hotel in Postira. Big thanks to Ivan for provoking the trip and inviting me and all the good souls I met on the trip. 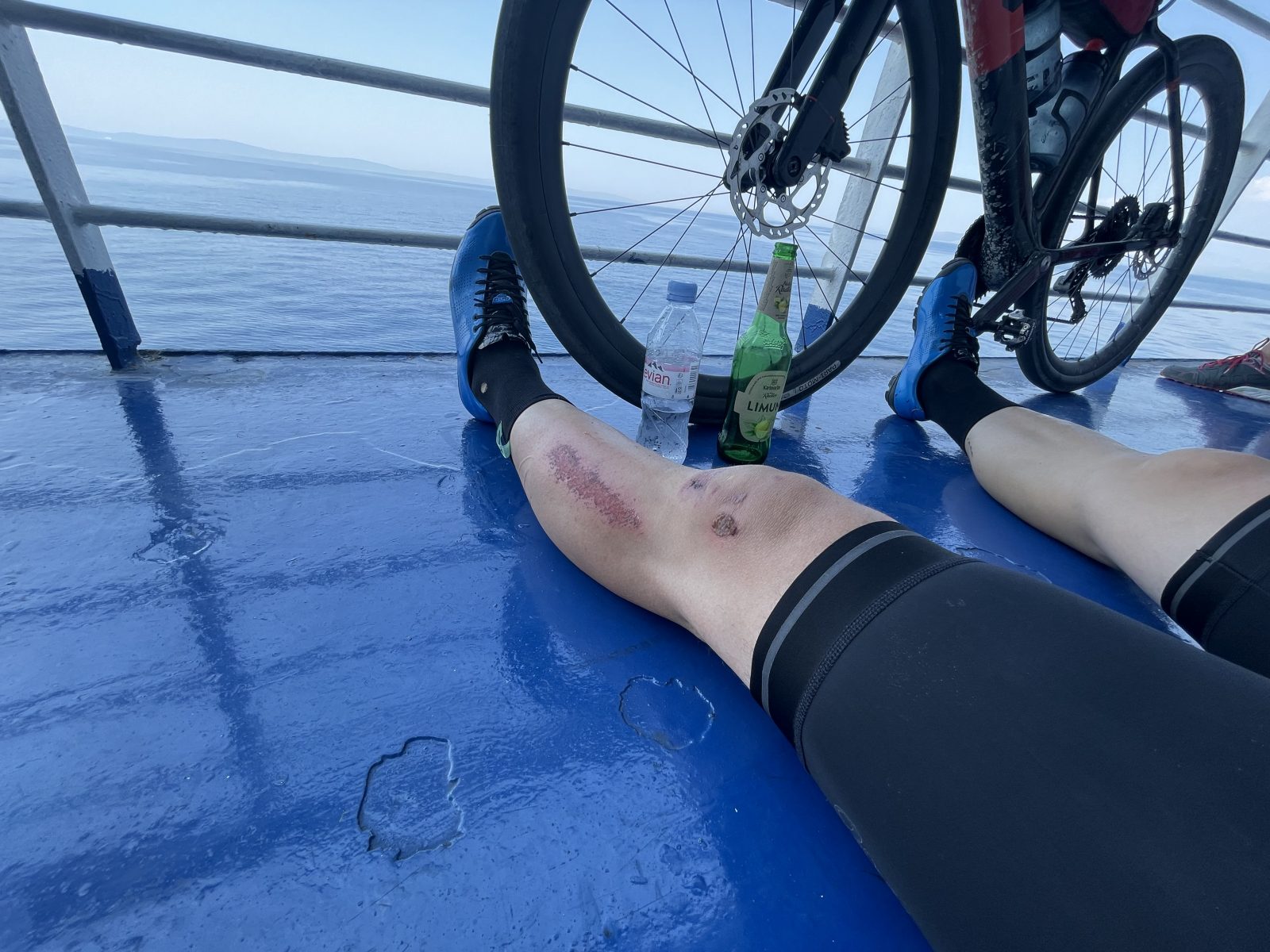