It all started as usual for Nico Valsesia. This time, with much more desire than usual, due to the long period of covid restriction, that limited also him and his family at home.

A short call with Alessandro Beltrame and Dino his photographer, just to say that we could not stand anymore time at home and the desire to travel was too high. So they set off on a journey.  Ararat was the new destination, the place where Noah’s ark is thought to be located !

Is there something you’ve been dreaming about  for a long time that has changed your life and opened up new horizons?

It happened to me in May 2021, when I left for Turkey for the #fromzerotoararat.

Climbing Mount Ararat has always been my dream, cycling as far as you can and then walking to the summit.

A crazy drive, more than 4,000 kilometers across Europe.

The challenge was born as a sporting experience, although very different from the others for two reasons:

The first and most important reason is, they are joined  for the first time by his son Felipe, 16 years old. He wasn’t just a spectator, but an active and determined part of the new adventure in Turkey. We shared important, fun and difficult moments. They could know each other better in an environment that doesn’t admit mistakes. 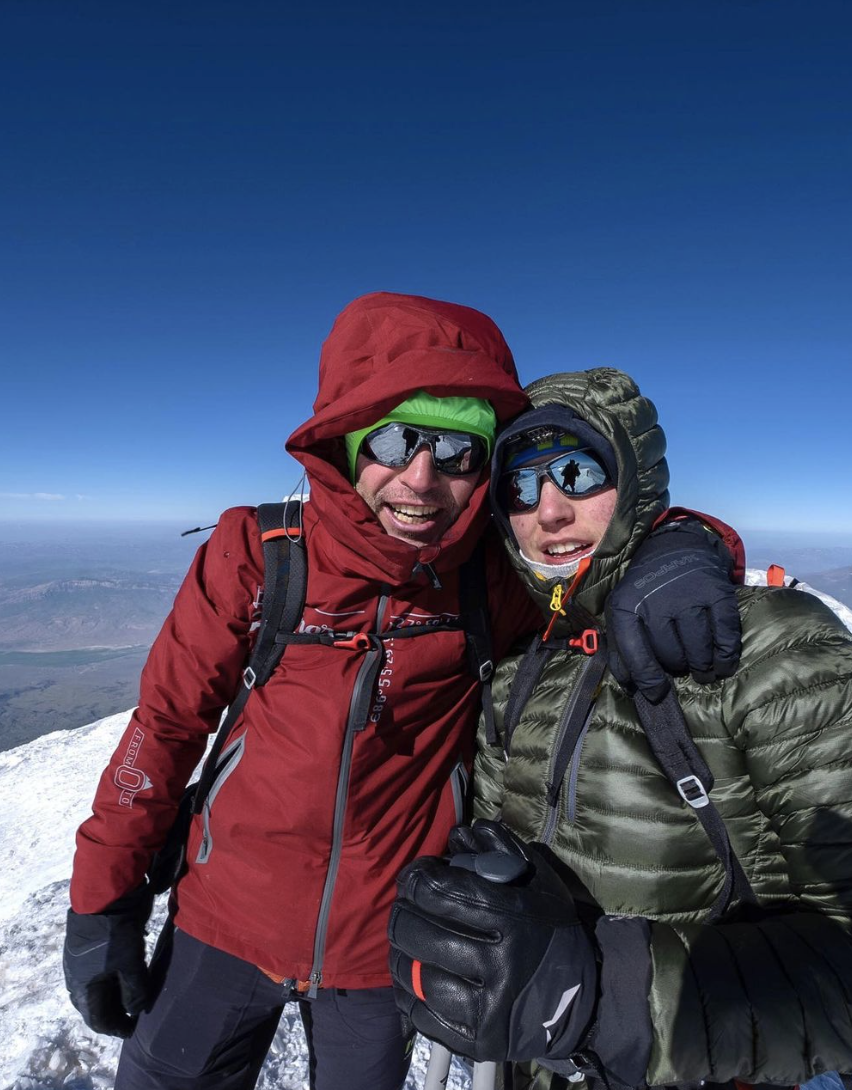 In addition to this happens a special meeting… that we can called almost “mystical”, a casual meeting between them and Angelo Palego, engineer, religious and researcher, who had been looking for the ark of Noe for more than 35 years, on Mount Ararat and died a few years months ago while venturing for yet another climb, certain that this time he had found the right coordinates. 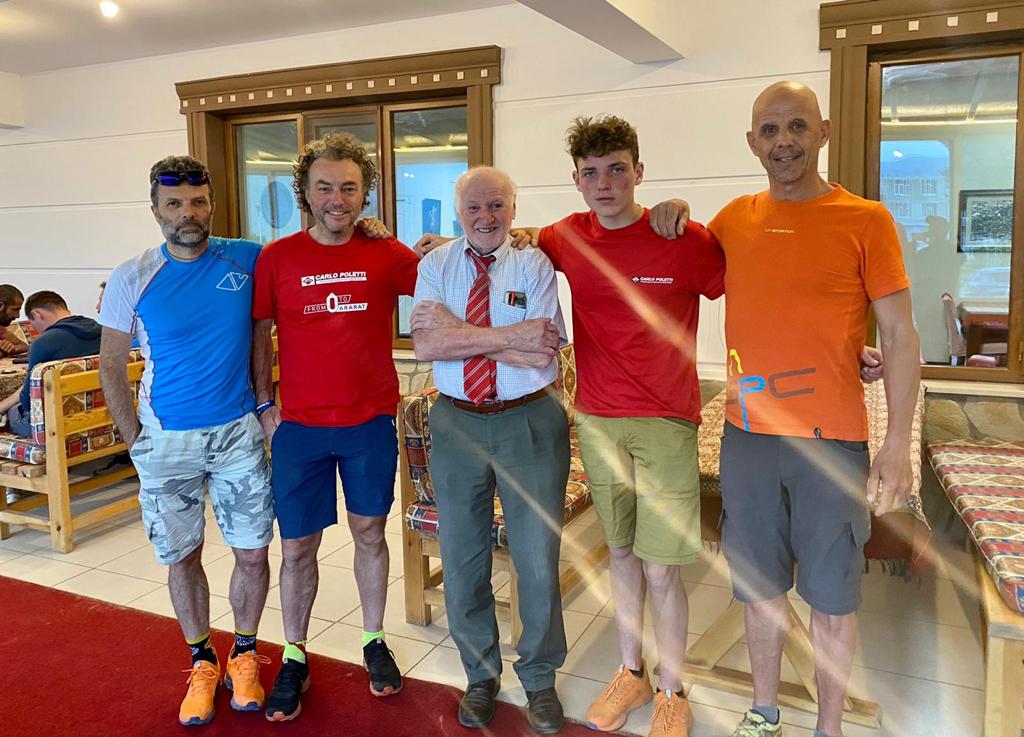 After an affectionate hug to his son Felipe, Nico Valsesia a stone’s throw from the sea of Hopa a town lying on the Black Sea of North Eastern Turkey takes his gravel and starts cycling

This photo below show him a few moments before leaving for #fromzerotoararat, he was in Hopa, a Turkish city on the Black Sea and he was looking at the horizon thinking about the adventure that was waiting for him.

Just beyond that horizon people were fighting an absurd and cruel war. 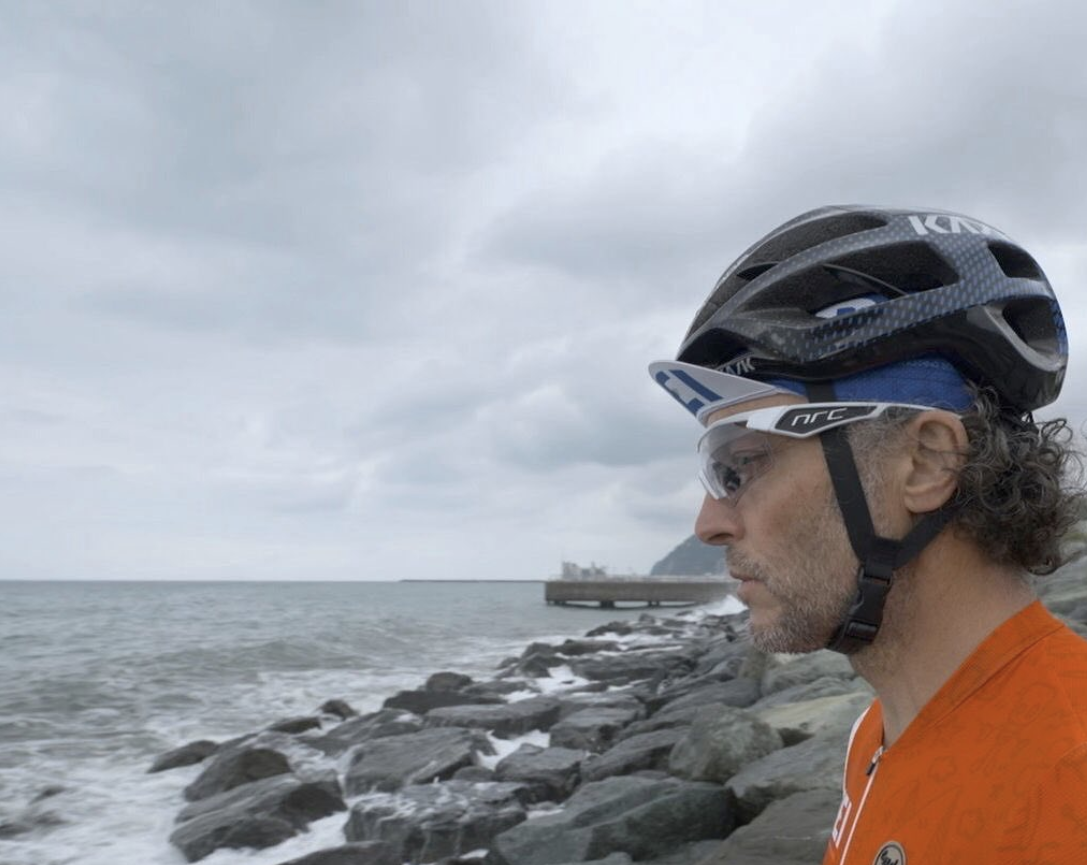 Since 1 January 2022 the Government of Turkey has again granted – under certain conditions – the possibility of reaching the area of Kurdistan where the Ararat Mountains group stands. The green light is directed to foreign expeditions interested in mineralogical researches and to resolve the question of the “Anomaly” of the main Mount.

Access to the area had been banned by the Turkish government in 1984 because it had been defined as a “war zone” in the conflict between the regular army and the Kurdish separatist groups of the PKK. Conflict began in 1978 that had flared up in that year.

The first part of the enterprise is the approach to the base of Mount Ararat 472km by bike and then begin the climb on foot. Turkey is struggling with covid so on the roads there is practically no one. 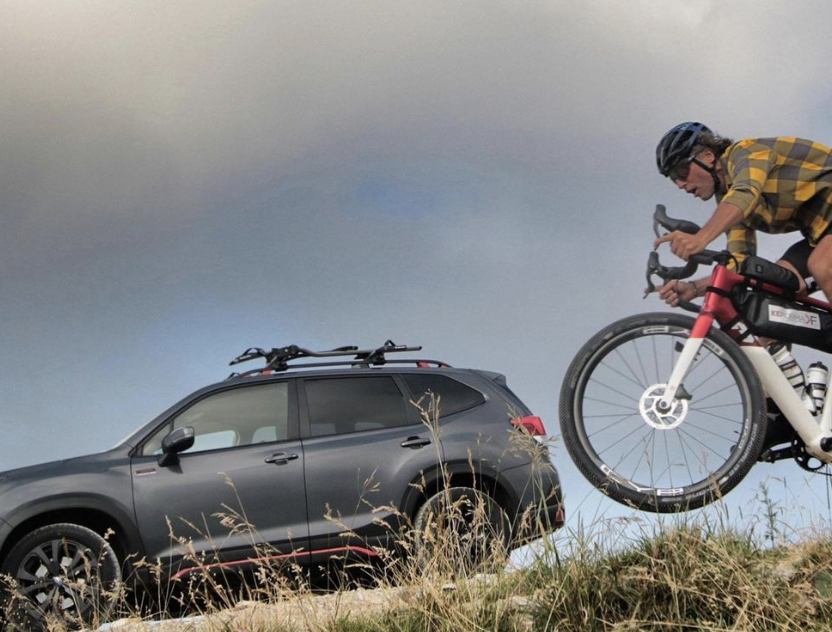 The most interesting is the Agri-Dagi, which has a base of 25 square kilometers. Morphologically, it is a volcano layer consisting of trachyte lava and pyroclastic debris (ash, lapilli), dacitic (quartz), rhyolitic (feldspar) and basaltic. On its summit there is a perennial ice sheet, extended for 2.4 square kilometers and thick from 2 to 9 meters.

According to some religious faiths (Christian, Jewish, Islamic, Eastern) the summit of the Agri-Dagi was the only part not submerged following a cataclysm of immense proportions (the “Universal Flood”) which would have occurred in 3400 B.C 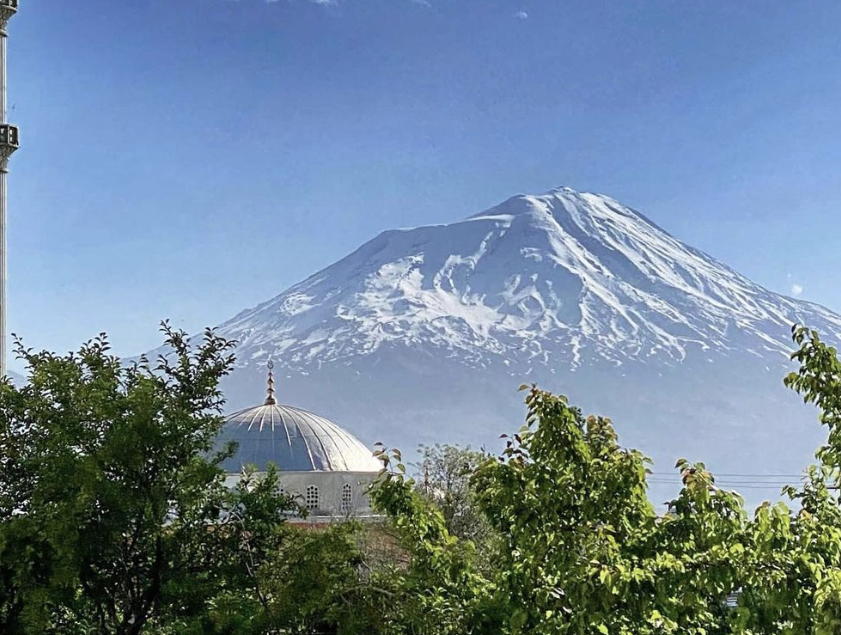 The road almost always very well paved first flows into a valley, then climb 100km and then continues up and down plateaus first very green then arid. In the middle, a few setbacks, a puncture, several checkpoints in Armenia, many maybe too many stray dogs even trying to attack Nico…a night spent with a bit of cold and wind and other dog attacks…but nothing can stop it, 300km on paved roads! 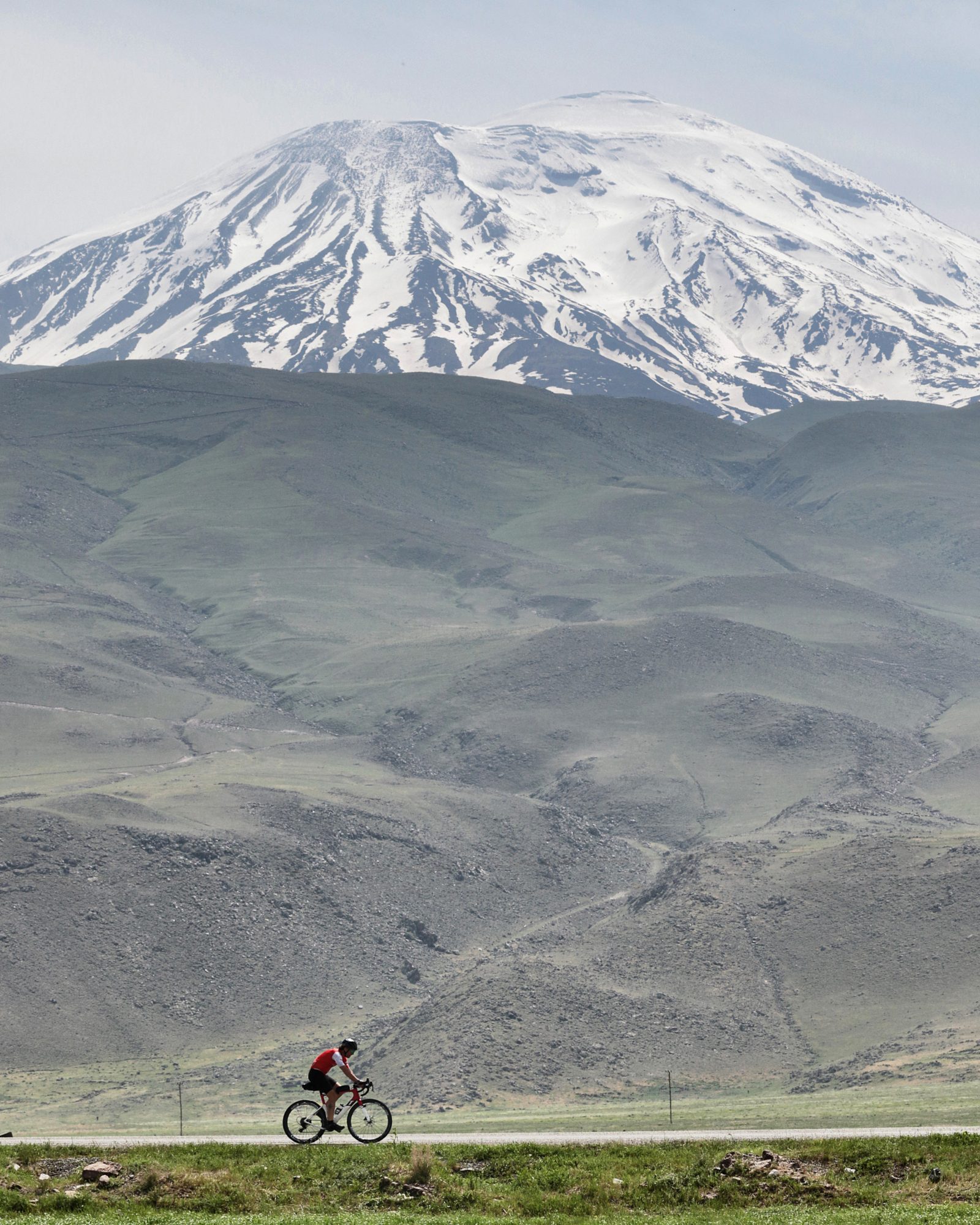 Arrived in Dogubayazit the small town on the plain at the foot of the Ararat, Nico changes bike and takes an Exploro Gravel with wider tires and tessellated for the last 20 km, to reach the clearing from the upstream climbs start.

A really hard climb and made even more complicated by the wind, the cycling race ends 25 hours and 31 minutes late. From there the adventure on foot with his son Felipe, unfortunately interrupted by the weather conditions at 3800 meters. 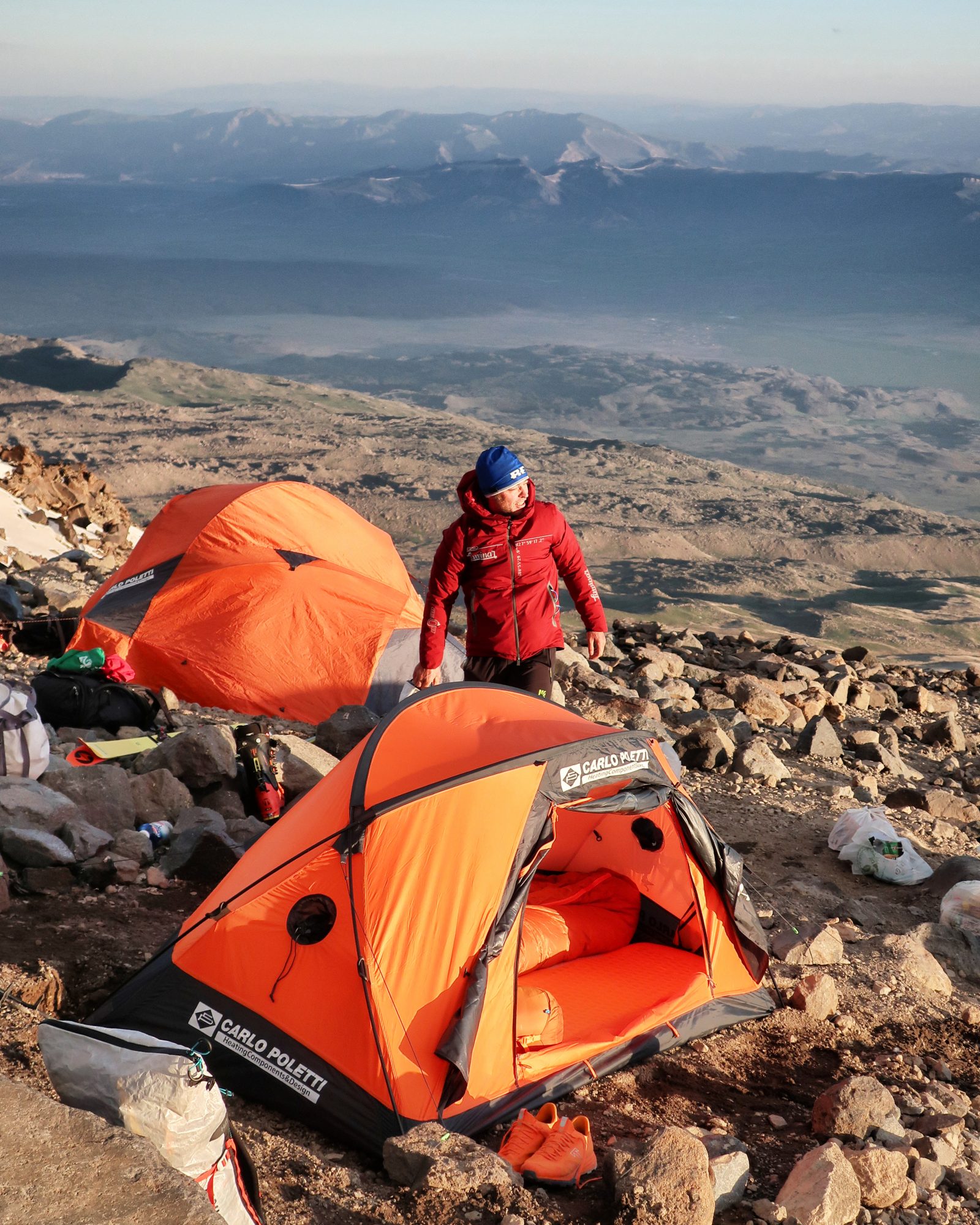 Nothing went as planned, but everything that happened during those weeks left a very deep mark on all the participants in the expedition.

I realized that the real journey is the set of all the lives encountered that are intertwined with yours.  I had proof that, in front of a crossroads the right path is the one that takes you straight to your dream

From the sea to the summit, “Ascension to Ararat” retraces the long 500-kilometre ride of the Novara ultrarunner and cyclist Nico Valsesia from the Black Sea to Doğubeyazıt. From here, with his son Felipe, Nico continues his walk to reach the top of Mount Ararat, the legendary mountain where the Noah’s Ark is said to have stopped after the Flood.

…But it’s not over. Angelo unfortunately left us during his new adventures to Ararat, just a few days after Nico’s came back home with his son, but Angelo left the coordinates to Nico, to reach the Ark by phone a message.

The next journey may be back to that destination, on those streets, but this time looking for the Ark, with a special dedication, Angelo Palego.

Do you like this story? Find out more on Amazon Prime, teaser below.