Early morning Florence in the heart of Tuscany. The market vendors are setting out their stalls and only the keenest of sightseers have emerged into the already bright sunlight. That light cuts sharp diagonal lines across the buildings as we ride in and out of the shadows, dodging the foot traffic and occasional taxi. 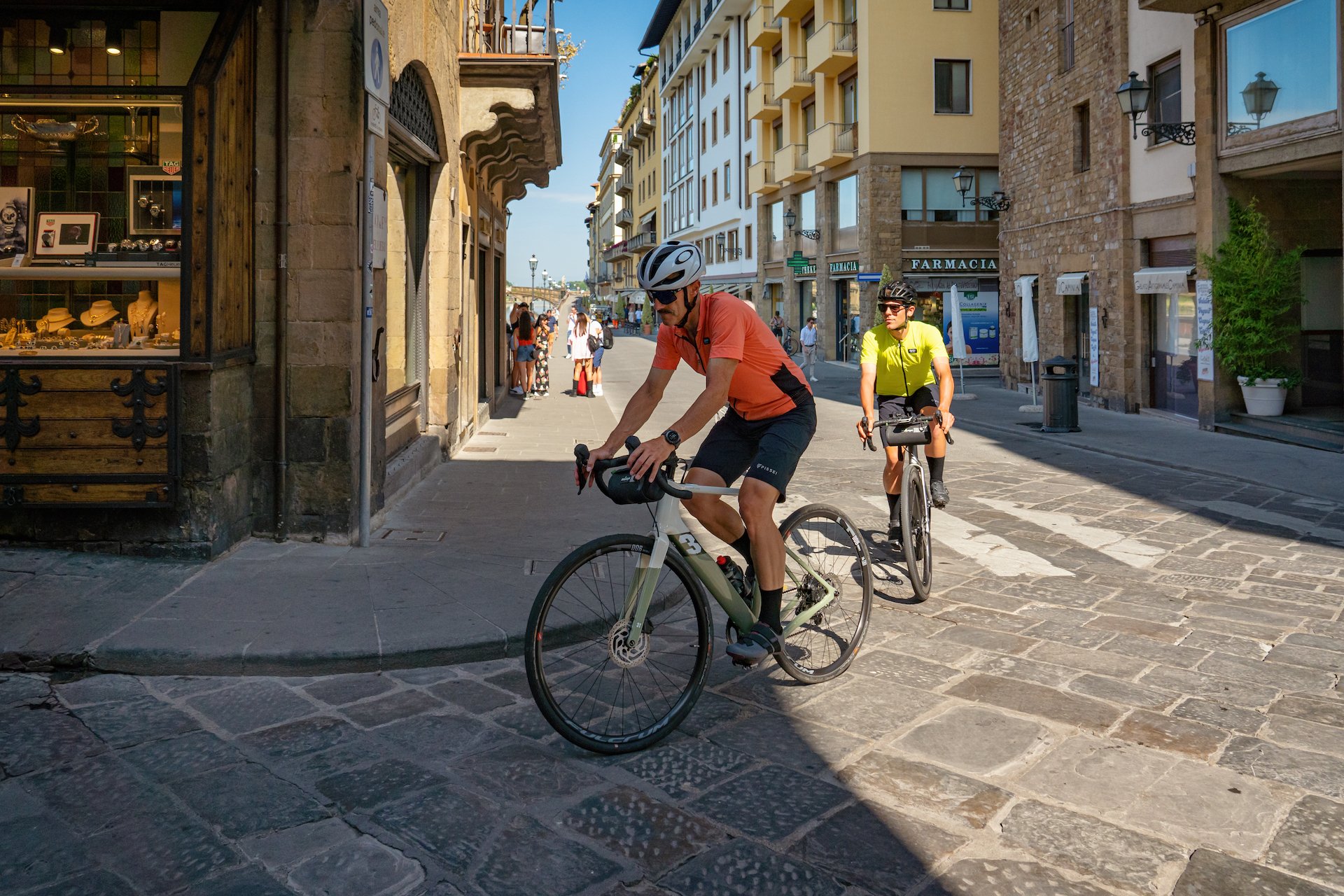 Two Bike Tours In One

Today is a day of two halves: firstly we will play the part of typical tourists and in that role our itinerary includes all of the greatest and most well-known buildings and monuments in the historic heart of Renaissance Florence, and secondly we will head west into an area rarely seen by travellers to this part of Italy. This will all be done seriously fast – but before you start to imagine this is some kind of boastfulness I should point out that we are using the brand new 3T Boost. We shall come to the bike shortly because first we need to talk about breakfast. 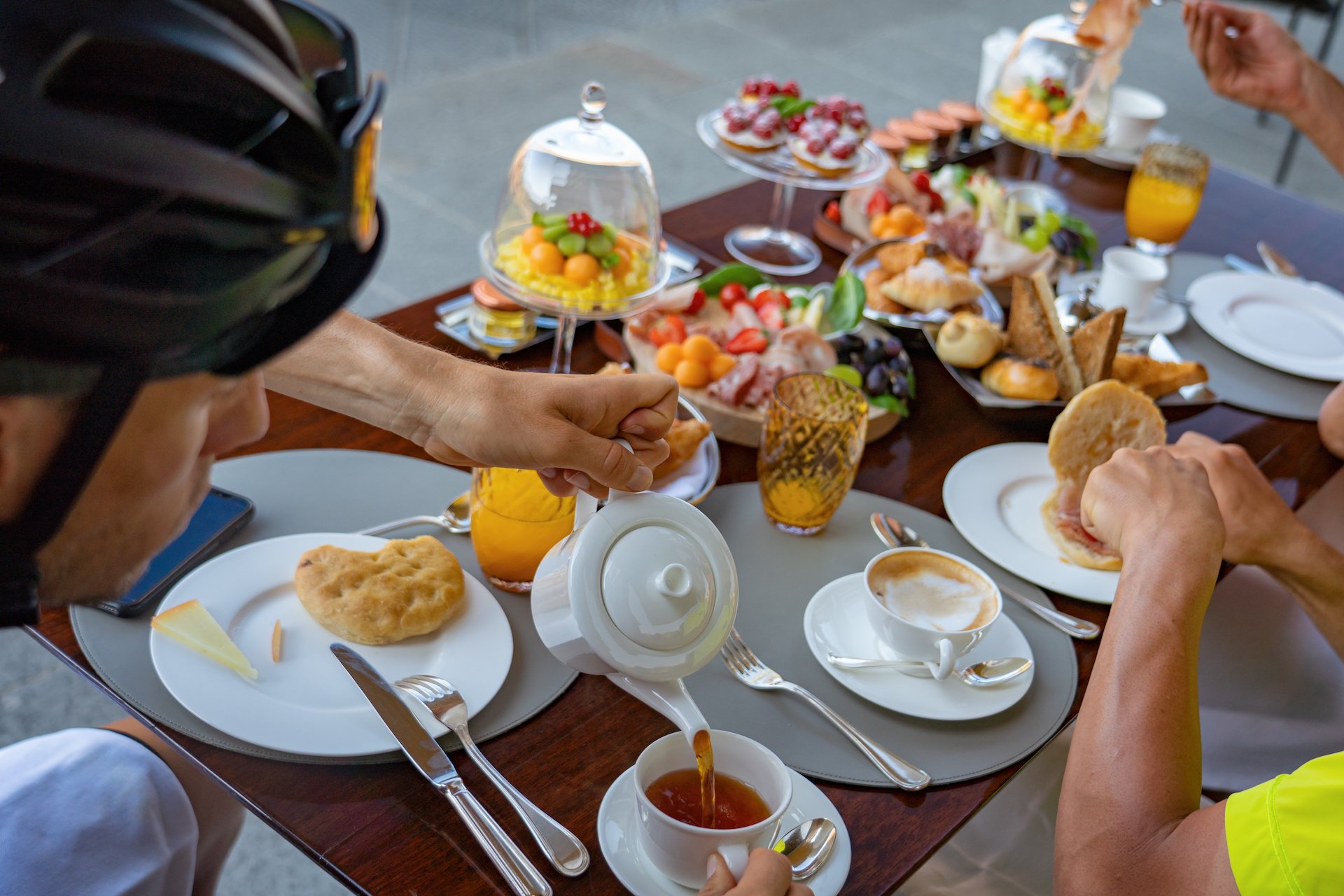 “I’ve never seen anything like it!” Given the backdrop of the Ponte Vecchio, one would be forgiven for imagining that it was the river spanning structure (one of only two in the world with shops on it) was the reason for such an exclamation, however it was in fact the spread laid on by the Portrait Hotel Firenze for our pre-ride meal. Some lucky members of our group are staying the the hotel though I need not envy them too much as I can also enjoy the same view as we sit down for the most sumptuous breaking of the fast I have experienced. 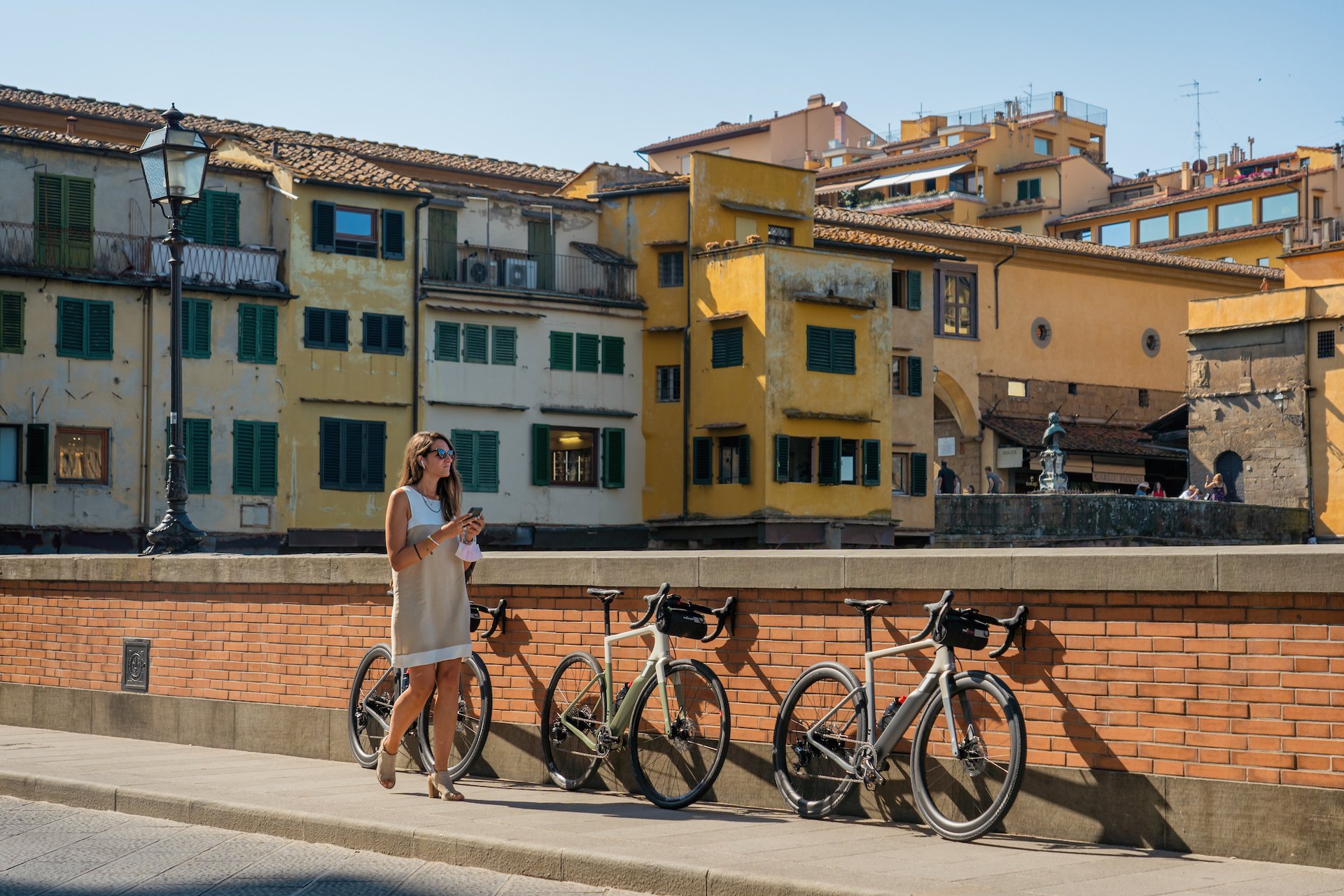 Passers by see the bikes, the location, then the food and nod at us, like a kind of gestural pat on the back, though I feel a strong urge to yell “it’s an e-bike!” to assuage some of the guilt from consuming so many pastries before a day of assisted pedalling. But I resist and instead balance out my consumption of baked goods with fruit. There is a post breakfast briefing on the functions of the bikes; once the concept has been explained the system is very intuitive. Any doubts about the duration of the battery are extinguished when the guys from the Rolling Dreamers explain that they have tested these bikes on more extreme routes with more distance and elevation gain. So we will be fine. As long as we don’t stick it on red all day (the highest level of assistance). Fine by me. Though I know I am going to have to try it at least once. 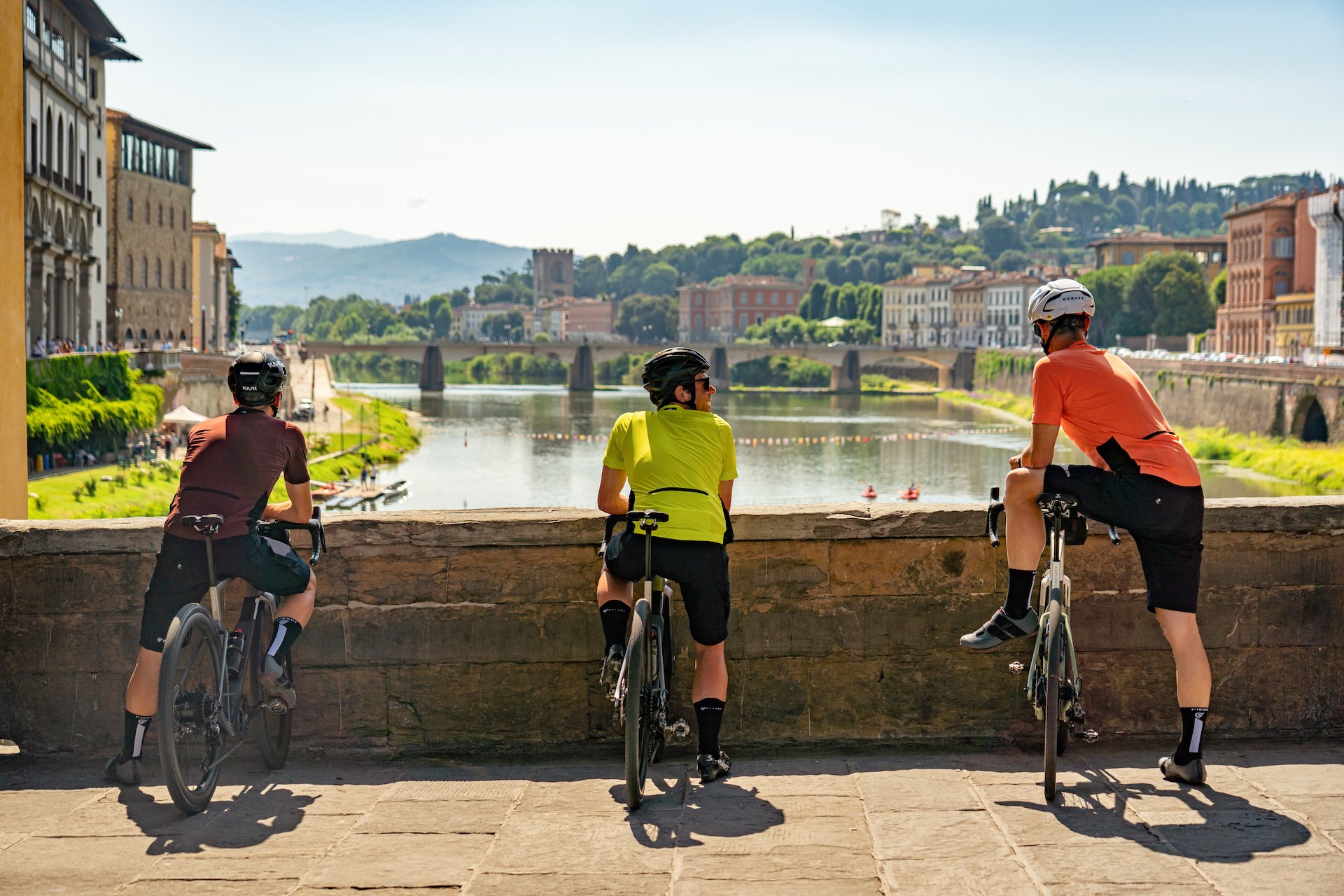 Offering our thanks to the hotel manager Diego and his team, we embark westwards, switching on our Boosts though keeping it strictly green – the easiest level of assistance – as we were advised to at this early stage. As soon as we begin pedalling even the seasoned cyclists of our group have an immediate reaction to the bike: I hear positive exclamations more than once as the assisted peddling kicks in and pretty soon I see them reaching down and buttons being pressed with lights going to orange and red… 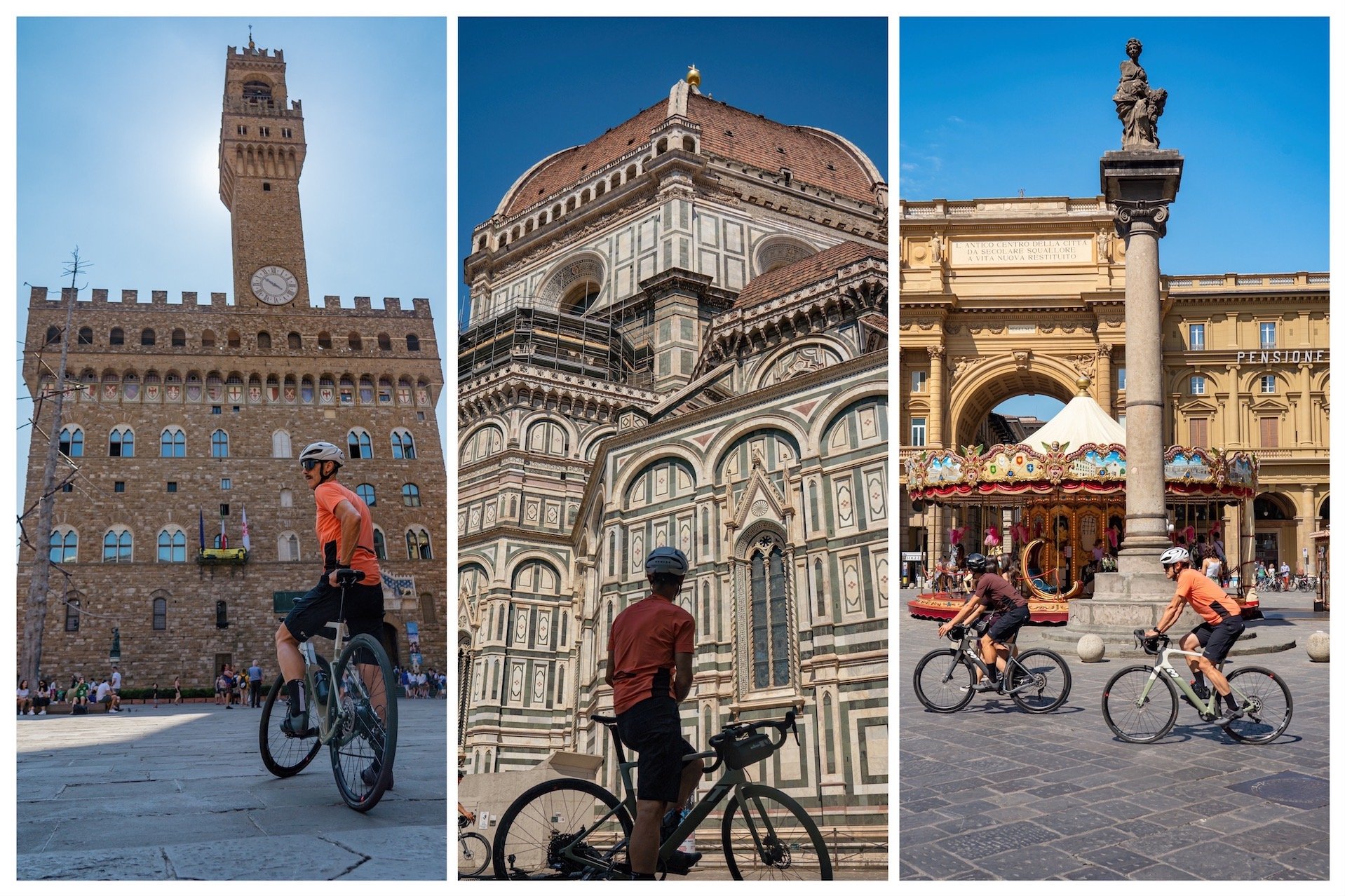 It was just too tempting but we are still in the very centre of the city so the bikes go back onto green (or even in one case, get switched off) for the sightseeing part of our ride. Florence defies description; if you have been there, you will know. We stop and stand in awe of Piazza della Signoria, surrounded by statues and faced by the Palazzo Vecchio. The cathedral of Santa Maria del Fiore is magnificent and enormous; we are dwarfed as we circumnavigate its exterior, taking photos on the way. Piazza della Repubblica –  the centre of the Roman city – warrants more photos but time is advancing and so must we. 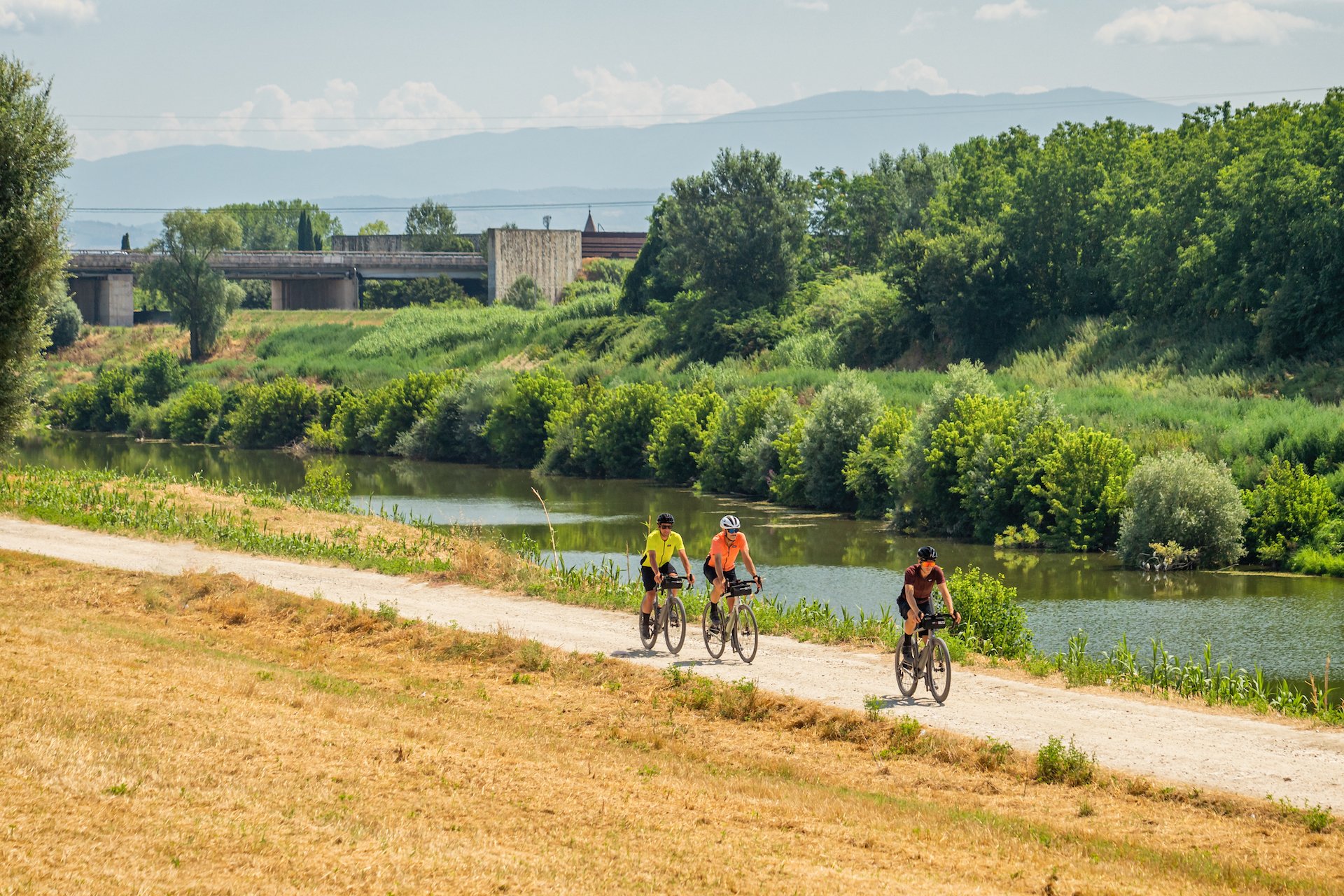 The Cascine Park is an enormous green space to the west of the city and gives us a flat and calm exit from Florence. Children on roller blades, dogs and dog walkers all need to be avoided but the large traffic free road allows us to ride alongside each other and have a chat.

Once we reach the edge of the park, the houses become more modern and we join the river, following its flow on a well packed gravel trail. Today is “light gravel” making it ideal for any level of rider and the slight downward trend of the riverside path is very flattering for our average speed. But we do not stay alongside the river for long and soon we have a climb up towards vineyards and villages. A tourist is rarely seen out this way. We stop in a local bar and Italian is the only language heard and indeed the only way to get the coffee order in. Fortunately “cappuccino” is within our vocabulary and Matteo and Andrea are on hand to assist should particulars such as the flavour of croissant filling need translating.

We follow the river’s path approximately until we reach Montelupo Fiorentino: Florentine Wolf Mount, probably the most exciting place name of the day but rest assured there are no longer wolves here, having been hunted to extinction some time ago. If we were to venture further west we would find Vinci, the early home and birthplace of Renaissance genius Leonardo. These are the hills of Montalbano, one of the lesser known sub-regions of Chianti. It is fascinating to see how various and different all the Chianti regions are from one another.

The second river we follow has a rockier path, the going is tougher but never too challenging. The three levels of assistance from the Boost are tuned differently. It’s not just a case of more power at each stage. Rather, on green (or eco) the bike gives an initial kick and then levels off with the assistance. This is perfect for a rocky riverside path like the one we are on now. Each pedal stroke gets a little extra nudge. If required, a quick push of the button would move the bike into orange (or medio) which keeps assisting up to higher speeds, excellent for catching the group after a quick photo stop. Soon we emerge into civilisation, specifically Cerbaia, the birthplace of Machiavelli and from here it’s a short climb towards Chiesanuova. 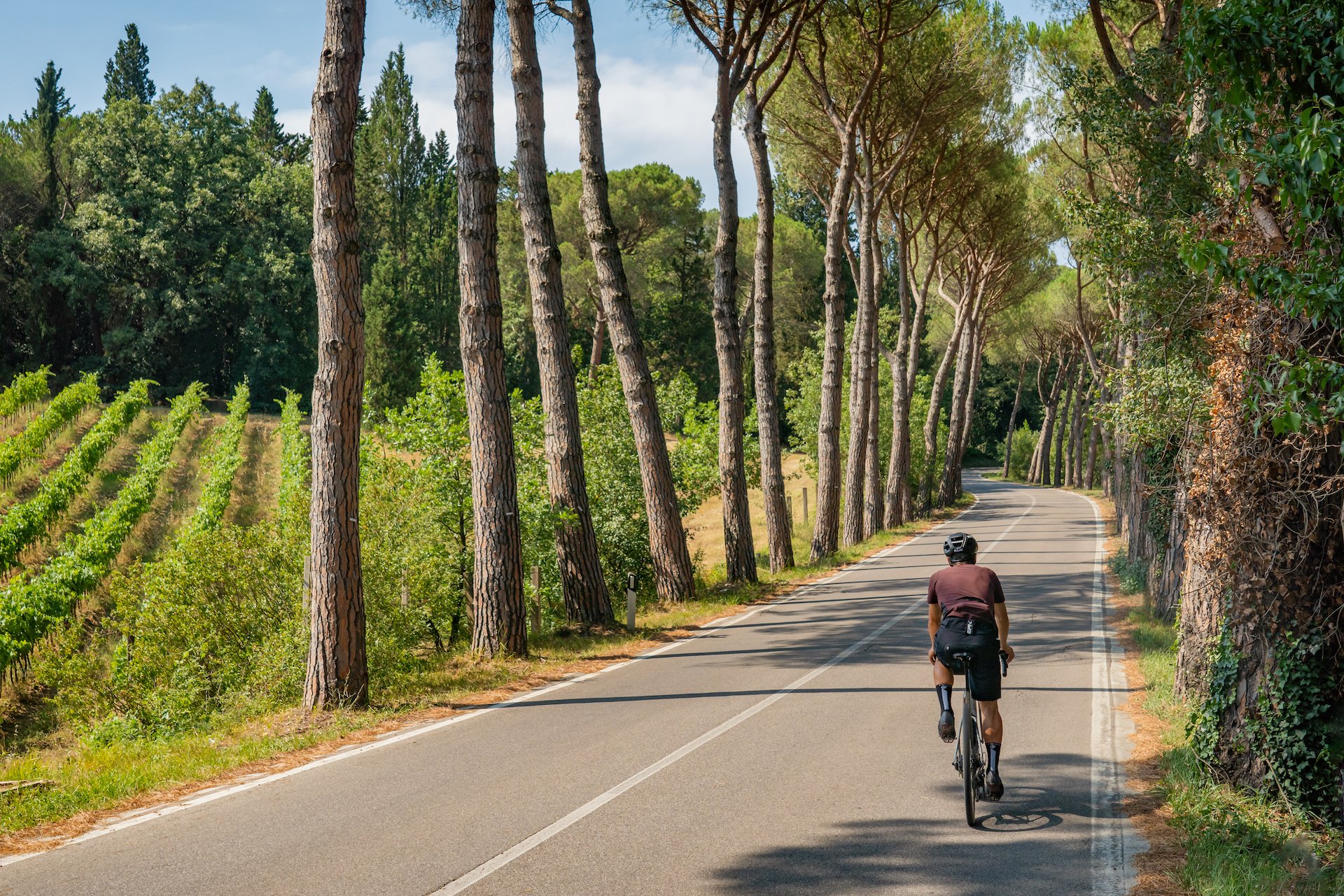 In Chiesanuova we will have a sandwich. But perhaps that undersells it slightly. This is no ordinary sandwich. The town has been on the locals’ radar for some time; they drive and scoot and ride from all over to have a classic “schiacciata”usually filled with ham and/or cheese though they also have aubergine/egg plant for vegetarians. On the main street there is a classic sandwich place and another serving more unusual and modern fillings. Both have quite a line but it is well worth it in the end. The bread has an olive oil and salty crust on it and is still warm from the oven. I find myself wondering if they do take away for my dinner later but I am brought back to reality by Andrea shouting “time for the King of Watermelon!” For context, we have already been told about Valerio and his fruit stand on the outskirts of Florence and have also been informed (by Matteo) that all of Andrea’s summer rides just happen to coincidentally return via Valerio – The King Of Watermelon. So that’s a seal of approval for sure. 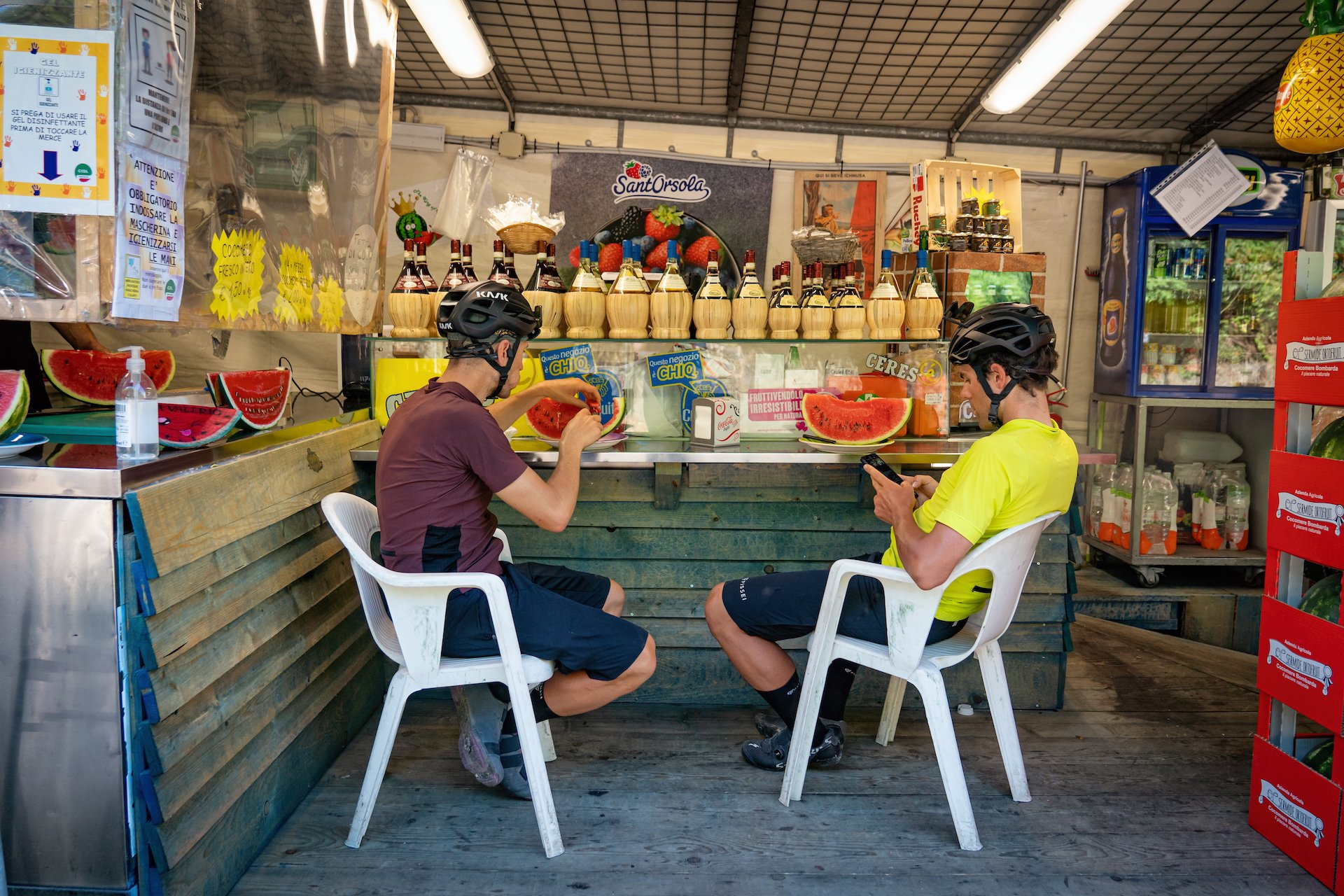 Some struggle with the enormous slice of watermelon but not me. There’s half a slice left, so I polish that off as well. It’s mostly water and it’s hot so I am hydrating myself. At least, that’s my reasoning… We wind our way back into Florence passing through the imposing Porta Romana – or Roman Gate towards the finale of the ride: a drink on the rooftop terrace of the Hotel Continentale. We began the day appreciating the city from ground level and that is memorable but it is up here that one can truly appreciate the cityscape. We make a toast to the day and enjoy the view.

For more information on this cycling adventure and others, click here to view the Rolling Dreamers website 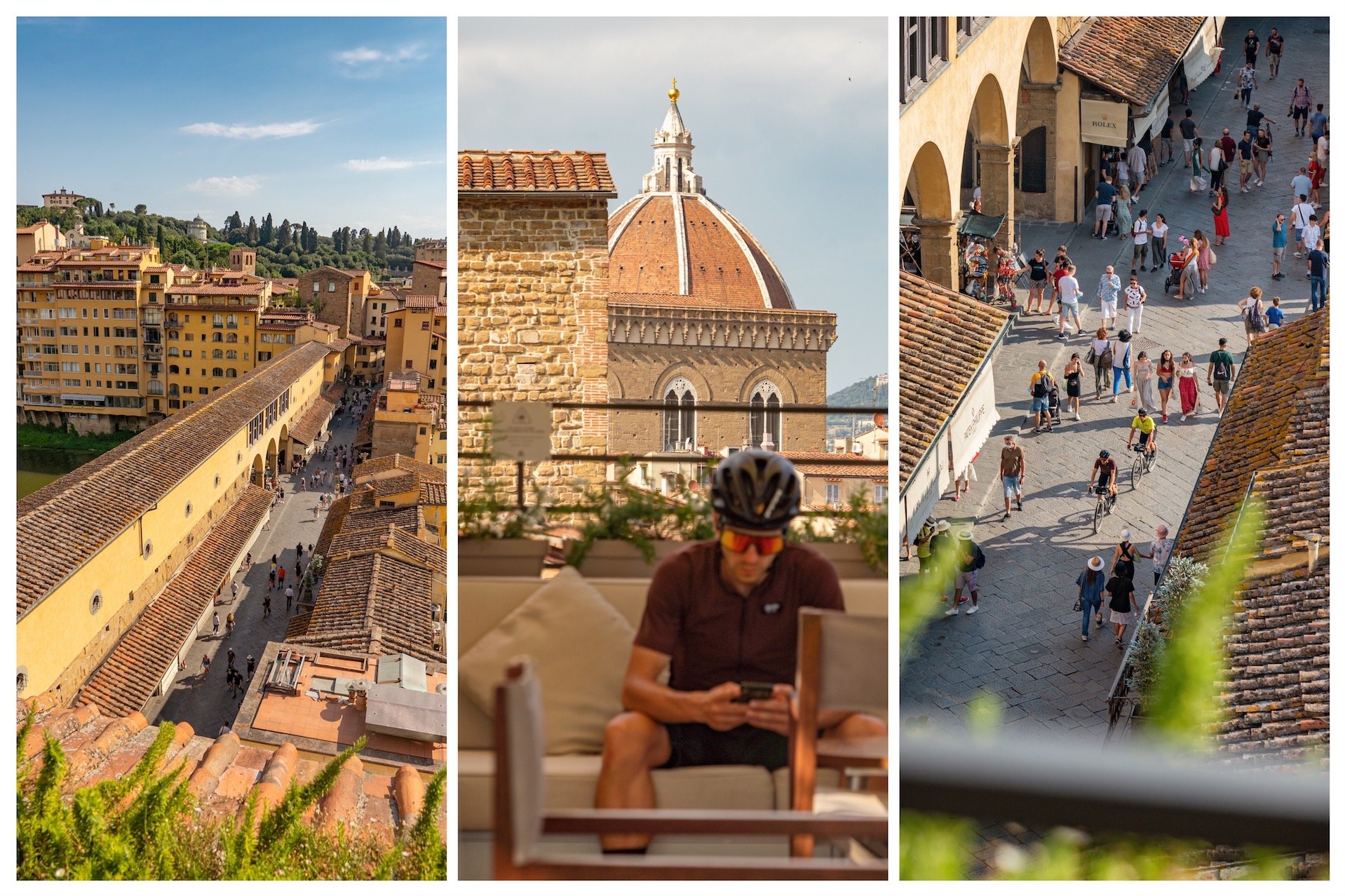