There was definitely no need to take part in a Jeroboam 300 and a Maratona Dles Dolomites in less than 48 hours, with the same bike, to prove that one bike is enough to do a bit of everything without limitation.

It was pointless because during the year, in our own small way, we took our Racemax pretty much everywhere and with different assets, always with satisfying results. From The Traka – in all its distances – to the Sportful Dolomiti Race granfondo. Meanwhile we went through another Jeroboam, the Veneto Trail and the Veneto Gravel and we cycled the amazing Tuscany Trail.

Far away from the spotlights we did some nice winter rides too, both on tarmac and off-road. Have our bikes ever been disappointing? No. Have they always taken us where we wanted? Of course yes.

Nevertheless, this “one bike is enough” thing has long been in the air and we left Fede the burden to overtake it. Spoiler: he made it through. But let’s hear from him how it went.

I must admit that the Jeroboam 300 was definitely challenging. First of all, we asked Maurizio if we could bring forward the start to Friday afternoon, because starting Saturday morning would have been almost impossible making it on time at the start of the Maratona (6:30am on Sunday in Corvara, two hours away by car from the finish line of the Jeroboam).

The answer was positive and so I reached out to the right partner for the job: Fede B. We met in Tesero, Val di Fiemme and in my bags I have all I need for both the events. Everything ends up on the grass and two minutes later all what I need for the Jeroboam is well set on the bike while the rest end up in the bags again. 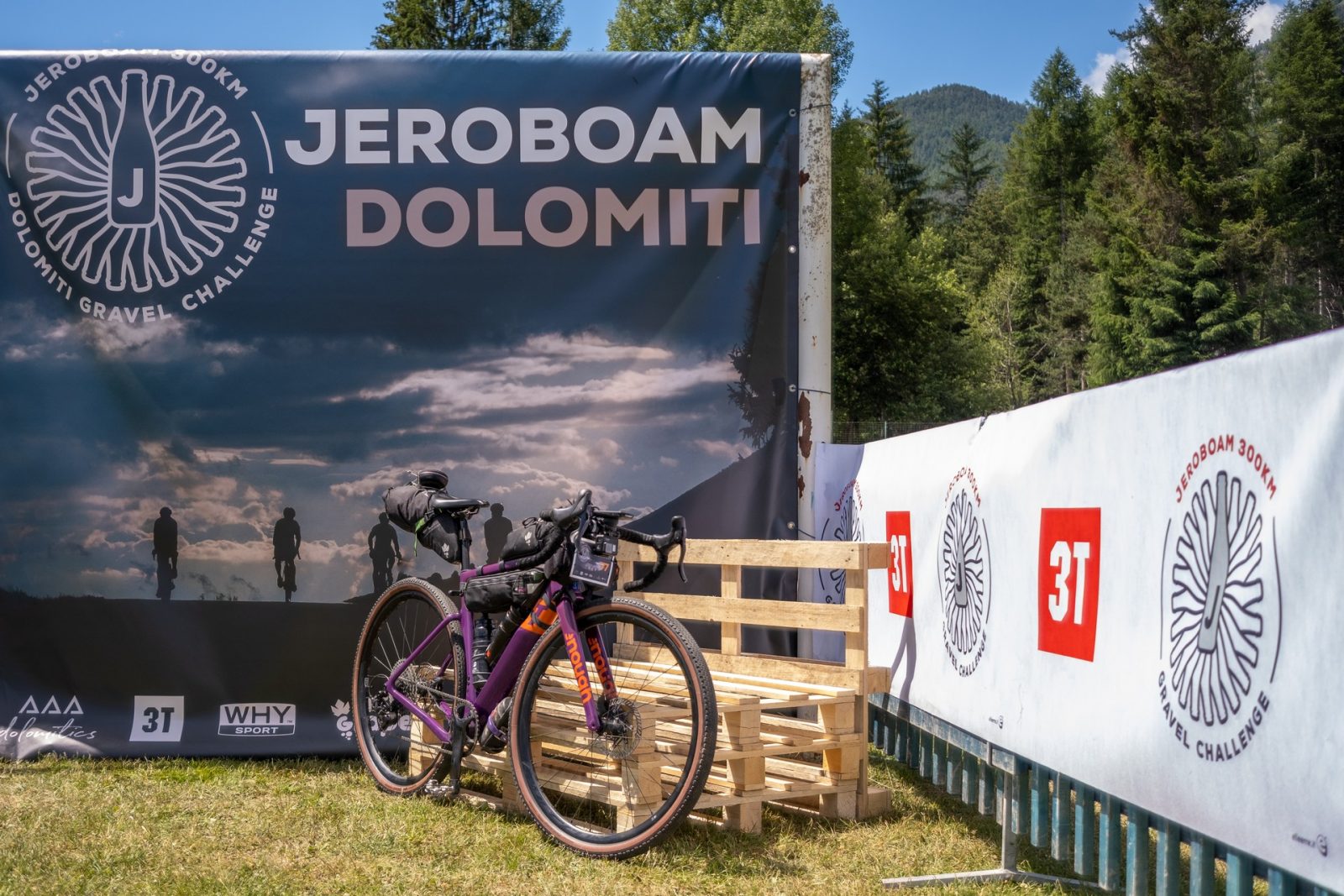 The setup is pretty straight forward: 650b wheels, Pirelli Cinturato H in size 45 mm and a couple of bags with just the essentials to survive the night, keeping in mind that we can’t stop much and we are planning to sleep inside. Which means we will travel light: no sleeping system required.

We start at 2:30 pm, planning to do about 120-140 km before the night. Truth is that we need just a few km from the start to realize that our projections are way too optimistic, because the route is demanding and quite rough in some sections. Demanding and awesome at the same time – Passo Rolle, Val Venegia, Alpe Lusia are beautiful but they require way more time than what we expected. Just like the climb to the Gardeccia refuge which was literally a ski descent to take backwards and kept us busy till sunset.

Long story short: at 10 pm we are still around the 80-85 km mark and we decide to stop at the Gardeccia refuge, to get some rest and be ready again on our bikes before the sun rises again. Alarm set for 2:30 and at 3:00 am we were off, cycling towards the valley, to later start climbing again, in the Val Duron. We enjoyed the sunrise on top of that effort, along with a group of horses and no one else on sight. All the fatigue is worth a moment like this one. 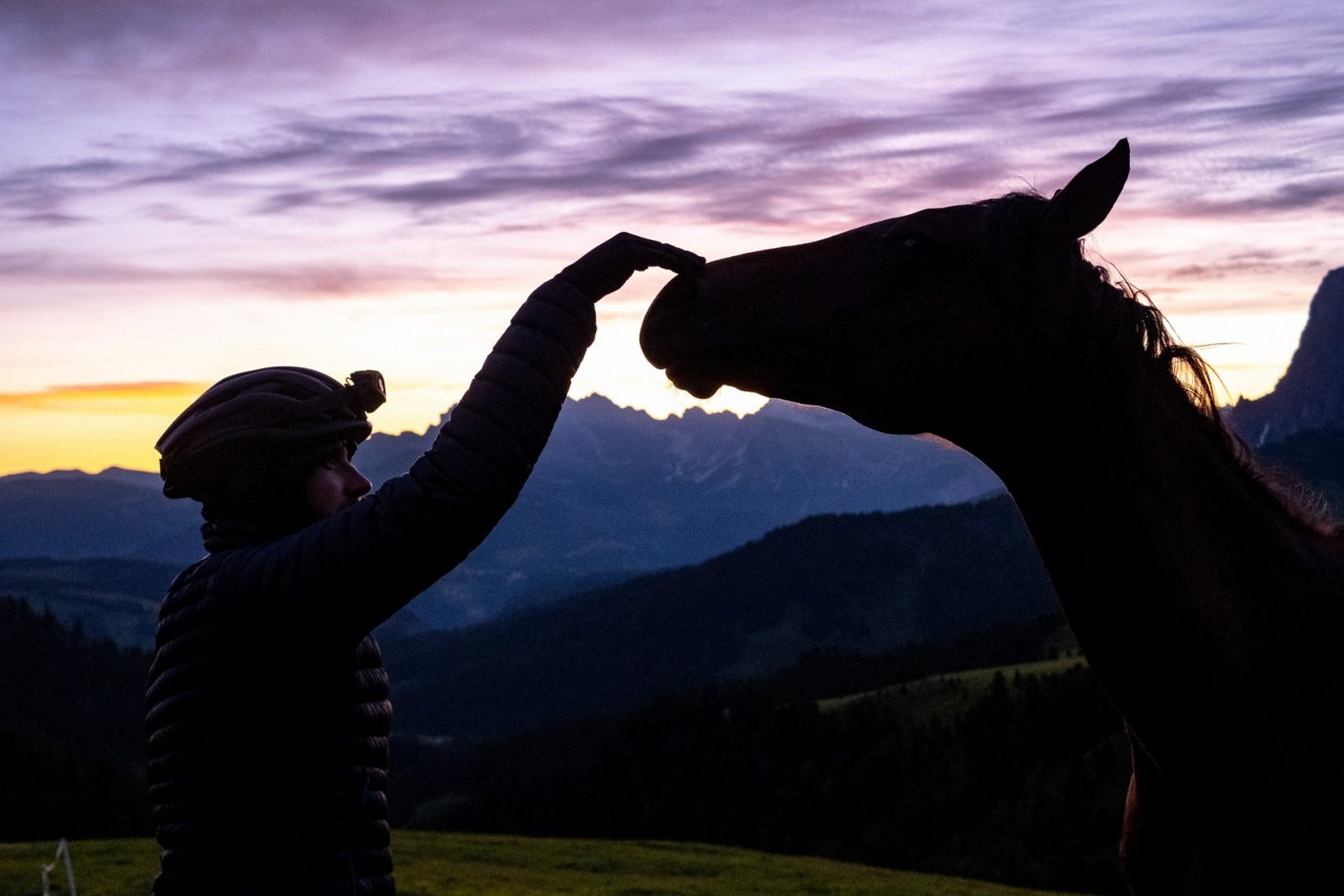 A chronicle of the second day would be dispensable. Just consider that we had to make it somehow to 300 km and 9K D+. Through rough single tracks and some portage sections we arrived at 10 pm, after a couple of hours under the rain to top the experience. All considered it was an awesome ride, but everything was a bit more challenging than expected. And checking the clock after the finish line, it is by far later than planned to make it in Alta Badia and get a few hours of sleep before the Maratona.

At 11.30 we have just enough time to have some pasta and make a quick setup swap. Fulcrum Wind 40 wheels on, all the bags off and the bike is ready to handle the Maratona. Dirty as a pig in mud heaven but ready.

I fall asleep around 2:30 and the alarm is set for 4:30. Smooth. Breakfast is a bit of a struggle, I get dressed and I move to the starting grid. I’m definitely worn out and some people look at me in an odd way. The dirty bike is not helping.

Right from the start I understand that the problem today will not be the bike – it’s going flawless and despite the dirt on it, it’s fresh looking. However I can’t say the same about my legs. I guess it’s just how it’s supposed to be, but they really don’t wanna move. Especially at the beginning it’s a psychological drama. A lot of friends are passing me by, as well as people that normally I’m not used to see going this fast. Where fast is related to how slow I’m going, in this case. 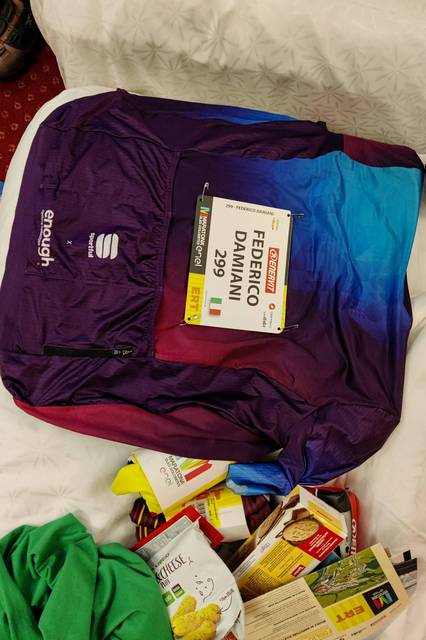 The Four Passes Loop is traumatic enough and when I pass through the finish line I am tempted to stop, but I accepted the challenge and having made it this far I can’t give up.

Same thing happens at the fork between the medium and long route, because I know well enough the Giau Pass and I’m fully aware that it’s about to get interesting… 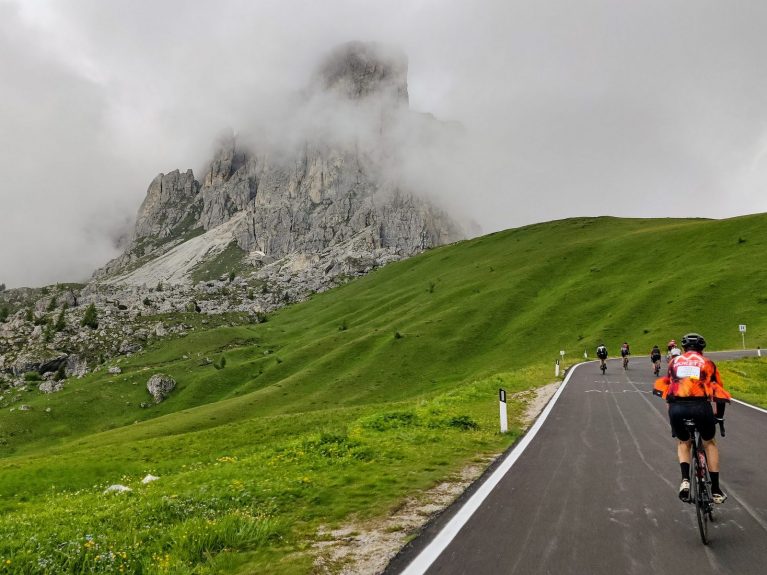 Nevertheless, as usual, the summit arrives. Sooner or later it always arrives. And I get a lot of positive things out of this Maratona. First thing first, I enjoyed without stress some great feed zones, then I was able to watch a different Maratona, made of people for which the challenge is making it to the top one climb after the other till the finish line rather than just racing hard. Finally it also reminded me about my first Maratona, when it was just six months since I had started cycling and making it through to the end was a goal hardly possible to reach at that time. 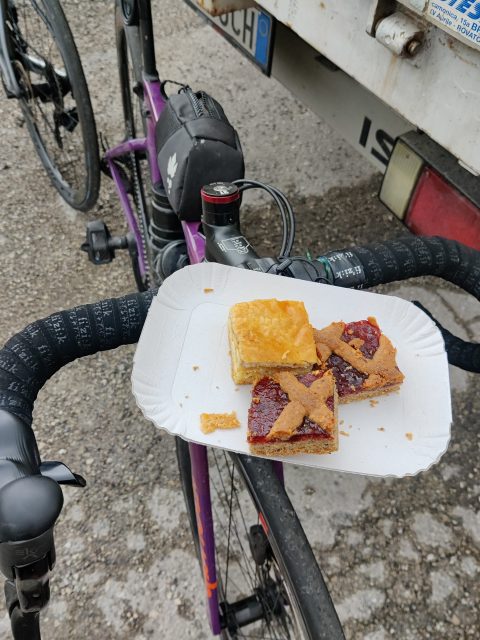 The feeling of uncertainty and the possibility of failing is what moves me to undertake a trip or participate in an event. Today, with a Jeroboam on the books, I found myself surrounded by people who are living this feeling on their skin and I like looking at them and having a chat together, sharing the same effort and emotions.

The finish line is a gift from heaven. Now I definitely need some sleep and drink a couple of beers to reload. The bike – on the other hand – is in tip-top conditions. It would probably do another loop around both at the Jeroboam and at the Maratona. My legs? Definitely not, for this weekend they have enough.