Today the dream is coming true: our Italian carbon factory is ready to build frames. It’s been a long time coming.

In 2015, we decided to start making 3T frames. First up was the Exploro in 2016, followed by the Strada in 2017. But we made another decision in 2015, one that remained hidden much longer. We decided that ultimately, we wanted to produce frames in Italy. 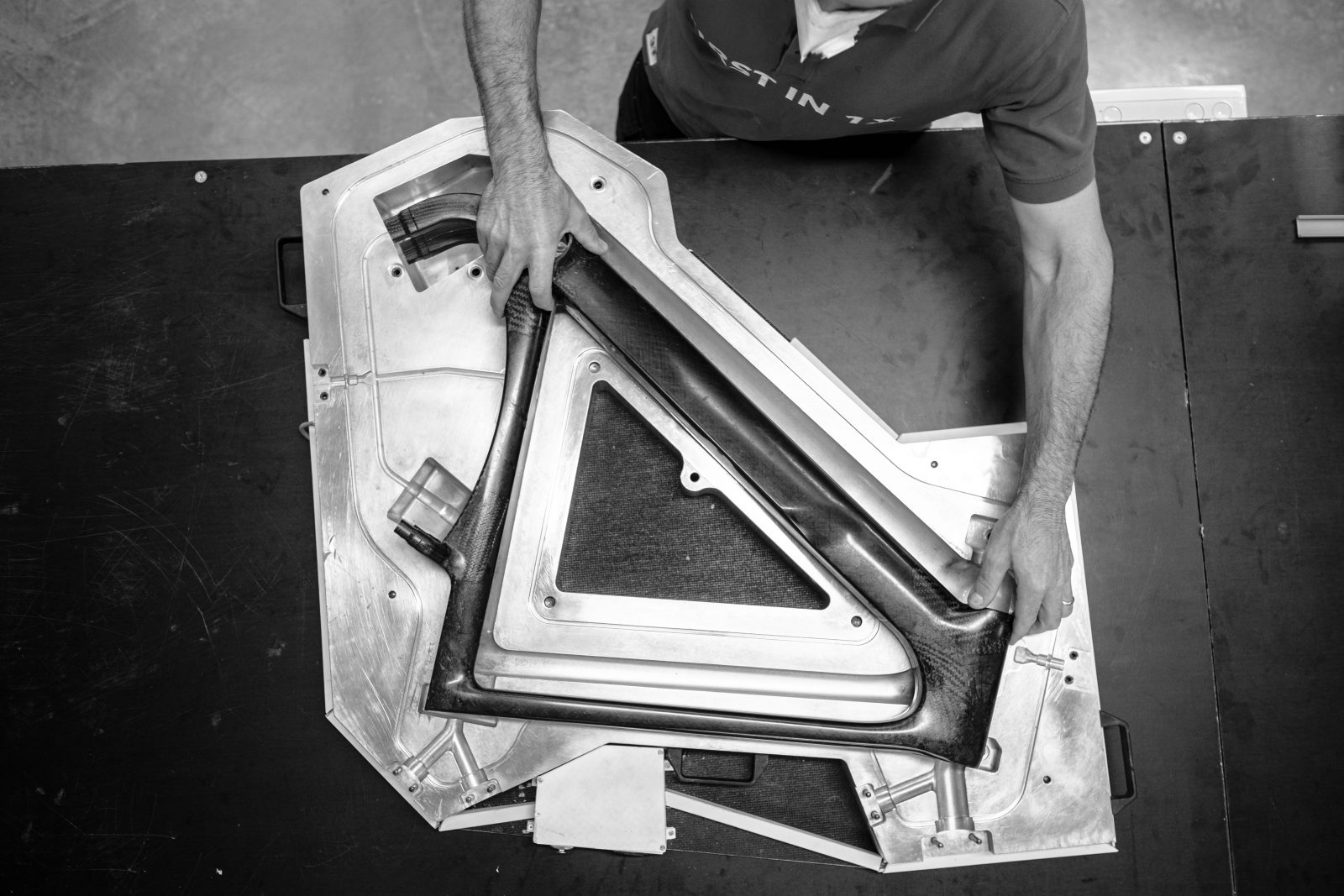 There were many reasons for this desire, ranging from romantic (3T was founded on Italian production in 1961) to technical (full process control) and from organizational (shorter leadtimes, more flexibility) to commercial (protection of proprietary technology).

Making that decision is easy, making it happen is hard. As you may know, 99% of carbon frames are made in Asia, even the very high-end ones. Almost all use the same process, which involves the manual lay-up of pre-impregnated carbon/epoxy and lots of manual labor in finishing. Copying that process over to Italy would have been easy, but not very sustainable.

Instead we simply asked: How would we design the production process from scratch for a carbon frame in Italy?

Secondly, we also knew that you cannot immediately change everything, it’s better to move in steps. We would target several specific technologies, try them one by one and then combine them into the ultimate frame.

Thirdly, starting up production is hard. The logical decision was to begin at the top of our range (what we called the LTD level for the original Exploro). If we know we can make the best and lightest possible frame in Italy, we know we can make anything. In addition, the volumes required for top-of-the-line frame would be lower. This way we could work on our processes more easily before scaling up.

After a review of all the manufacturing technologies, two key decisions were taken for our Italian carbon factory:

The concept is simple. Instead of sheets of carbon cut in different shapes and applied on a core, filament winding uses a yarn is spun that is spun onto a core to create a carbon shape. By changing the speeds of the winder, you can change the angle of the yarn on the core. This means you can angle all the fibers exactly as you want – in theory.

In practice, enormous complexity is hidden behind this simple theory. For example, as our fiber is dry (not yet sticky with resin, see below), it doesn’t want to stay on the core very easily. And winding doesn’t like very “sharp” angles, so along the tube. Just think about wrapping a string around  stick, it’s easy to wrap it around and the string will stick pretty well, but how do you wrap it along the stick? 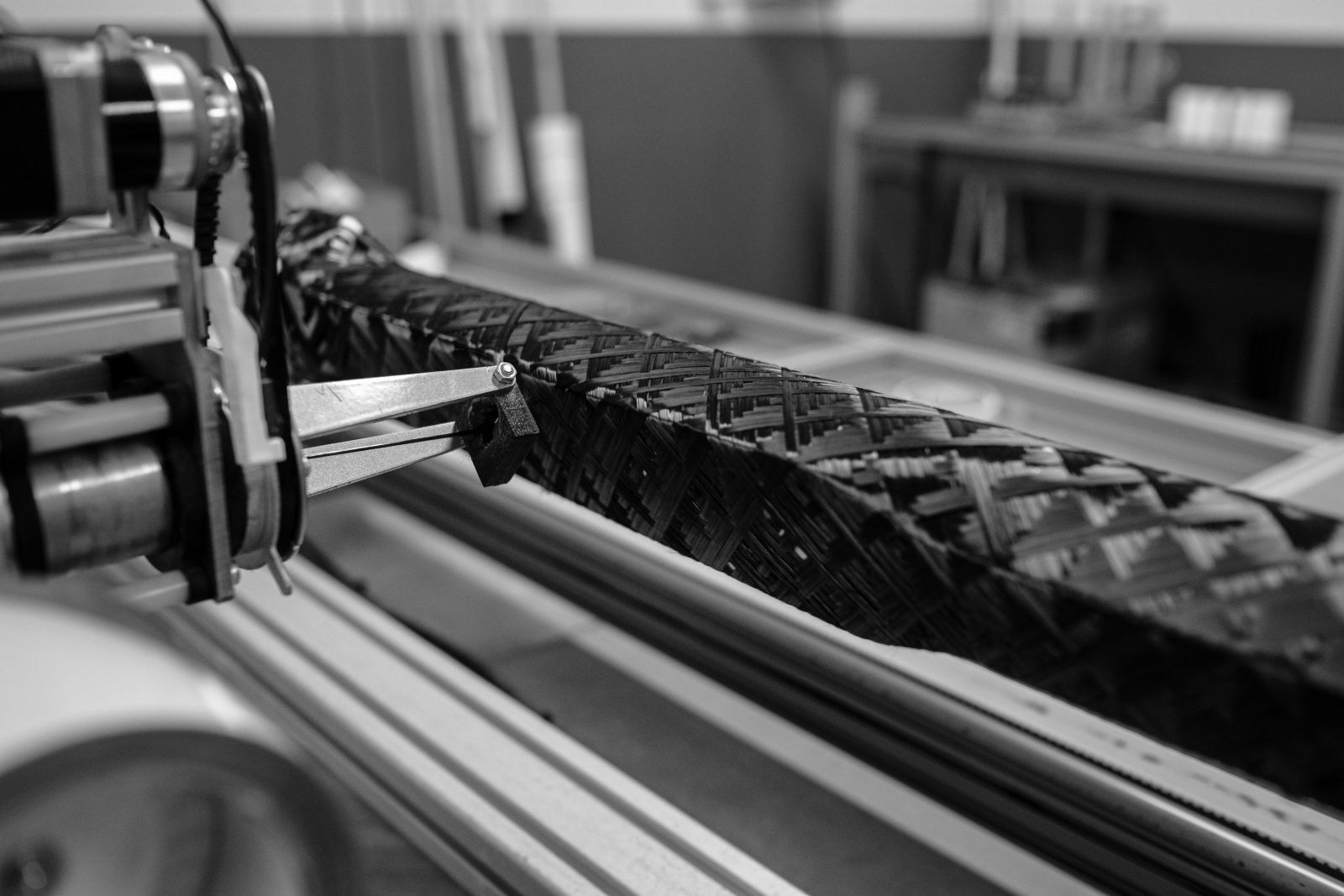 So our team put enormous effort into designing and building our own filament winding machines. You’ll see some prototype winders in the images here (the ultimate winder we’d rather not show). The result is that we have no limitations anymore with regards to fiber angles. We can create almost any layup with a combination of special fiber placement and cutting.

To use filament winding but avoid some of the problems mentioned above, you can use what is called a resin bath. Here the fiber runs through the resin before being spun onto the core. Unfortunately this is not suitable for complex geometries. And that’s exactly what a bike frame is!

With the use of dry fiber we can create more complex parts, integrating different types of fibers and add reinforcements where needed. It also gives us a perfect match between the different preforms that compose a bike frame.

There are several other advantages too:

With pre-impregnated carbon, you have to place the pre-formed frame into a cold mold. Otherwise, the resin starts to react as it hits the mold, before you’ve finished placing the whole frame.

Then you need to heat up the mold, cure the resin, and then cool the mold down. After all that, you can start to produce the next frame.

This cycle of heating and cooling is time- and energy-intensive. That means it is also costly, both in energy consumption and because a long cycle time means you need more molds to reach a certain production volume.

When you use dry fiber, you can stick it into a hot mold and nothing happens. Then you close the mold and inject the resin, at which point the resin starts the curing process. So you can produce frame after frame without having to cool down the mold and heat it up again.

Furthermore, every grade and type of carbon fiber is available as a dry fiber yarn. After all that is the base material used to make any other style of fiber – weaves, braids, UD (both dry or prepreg). The more you let suppliers process the fibers for you (by either turning them into sheets or tubes already or by pre-impregnating them), the more restricted you are in the type of fiber available.

Having a production process that starts out with the yarn as we have now in our Italian factory means we can create the exact layup we want with the exact properties we want.

As a final advantage of the injection process, the out-of-mold surface finish can be much better. If you do it right that is – the surface can be a lot worse too before you have it dialed in! This means lot less finishing work after the frame comes out of the mold. For example in the case of the Torno crank, most of them do not require any finishing when they come out of the mold, the surface is already perfect.

So we scoured the world for the best technologies in this field, hired the brightest minds, tried many different approaches and designed & built custom production machines. In 2018 followed the first major step, putting the 100% Made in Italy Torno crank into production. 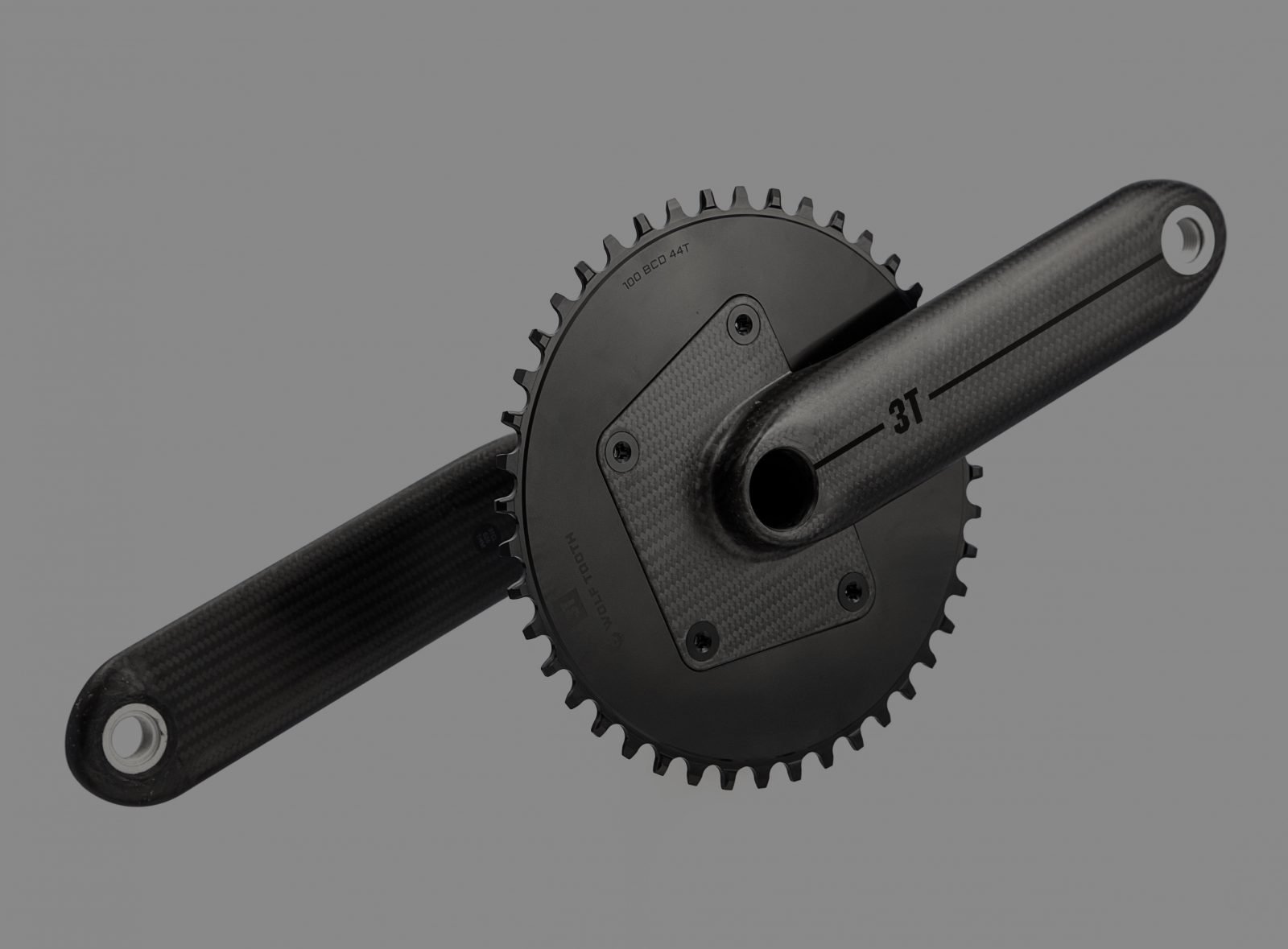 The Torno uses the resin injection processes we also wanted to use for frames,  while using more traditional pre-mold techniques instead of winding. This allowed us to gain experience with the injection without needing to battle winding challenges at the same time. In fact, later on we also made cranks using winding, but just as experiments, not for sale.

In 2019 we started with the development of the first production frame: the Racemax Italia. The goal was to produce a frame that would be lighter than the standard Racemax (not that easy as it’s already light for a gravel frame) while keeping its stiffness and strength attributes. This month, it goes into production.

Of course there are some things we cannot show about the production process, it’s not just our customers that read this blog :-). But here are some impressions of the new Italian 3T factory:

To celebrate, we are producing the first 100 frames out of the Italian carbon factory as a special Founders Edition. It comes complete with fork, seatpost and a few cool customizations:

The first frame goes into our 3T Museum, the other 99 are available to you. Below you will find a few detail shots showing the see-through paint. From left to right you can see the standard carbon finish, the engineering carbon finish and the commemorative metal plaque. We’ll have more and better photos in a follow-up post. 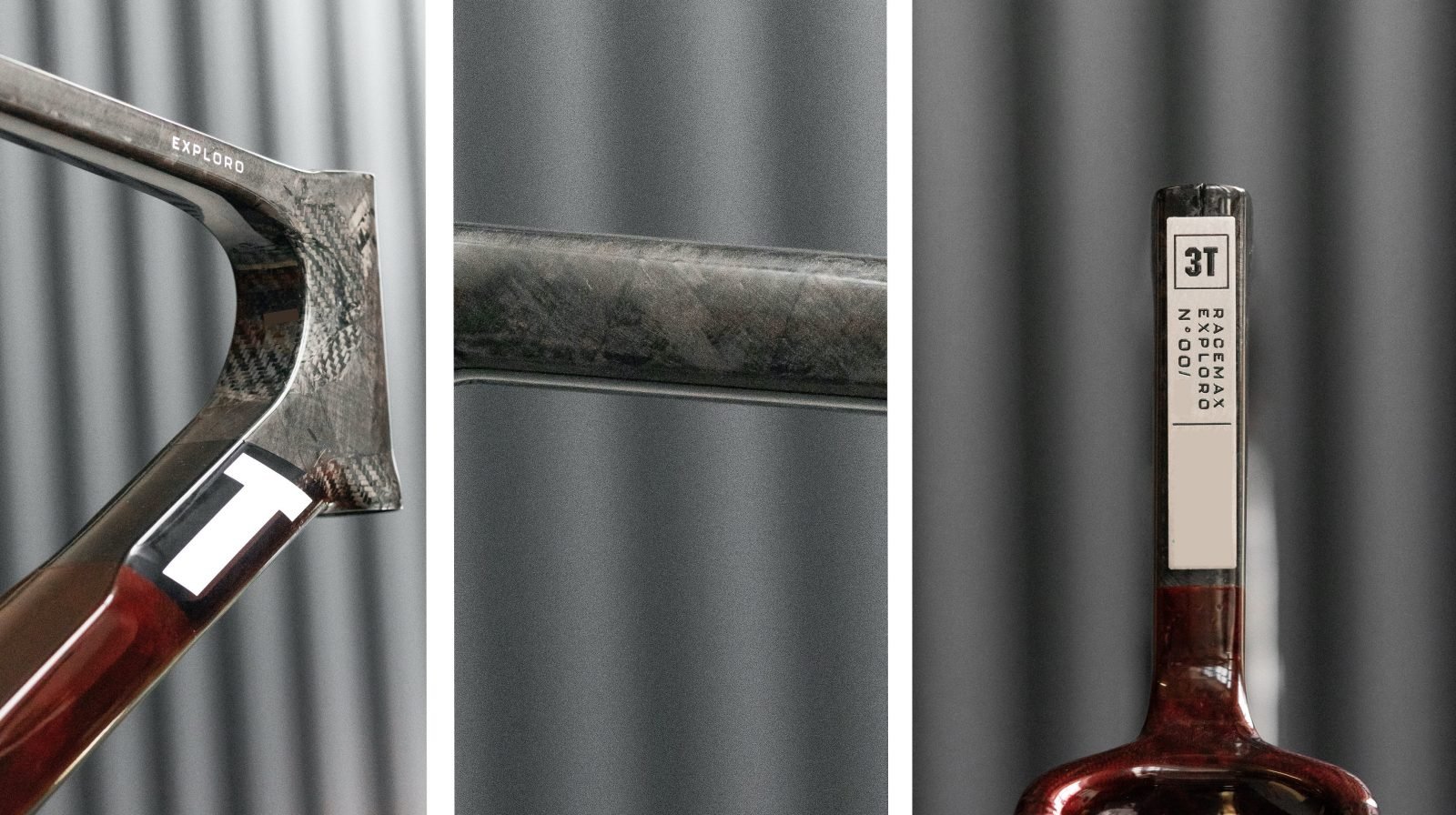 We’ll have many more details on the Founders Edition frames in an upcoming blog, but if you can’t wait (or don’t want to lose out), just fill the form below and we can give you more details on the options and the timing. These frames will be produced between now and October.

The earlier you order, the earlier your production slot will be, depending also on your exact customizations. So for some it will be a bit of a wait but in today’s bike market, it feels just weird to have ANY frames becoming available that are not already spoken for since forever.

And for those who want even more Made in Italy parts on their Racemax, the Founders Edition is a perfect match for our world’s most aero & narrow Torno cranks and the world’s most aero gravel wheels; the Discus 45|40 with Carbon-Ti hubs.