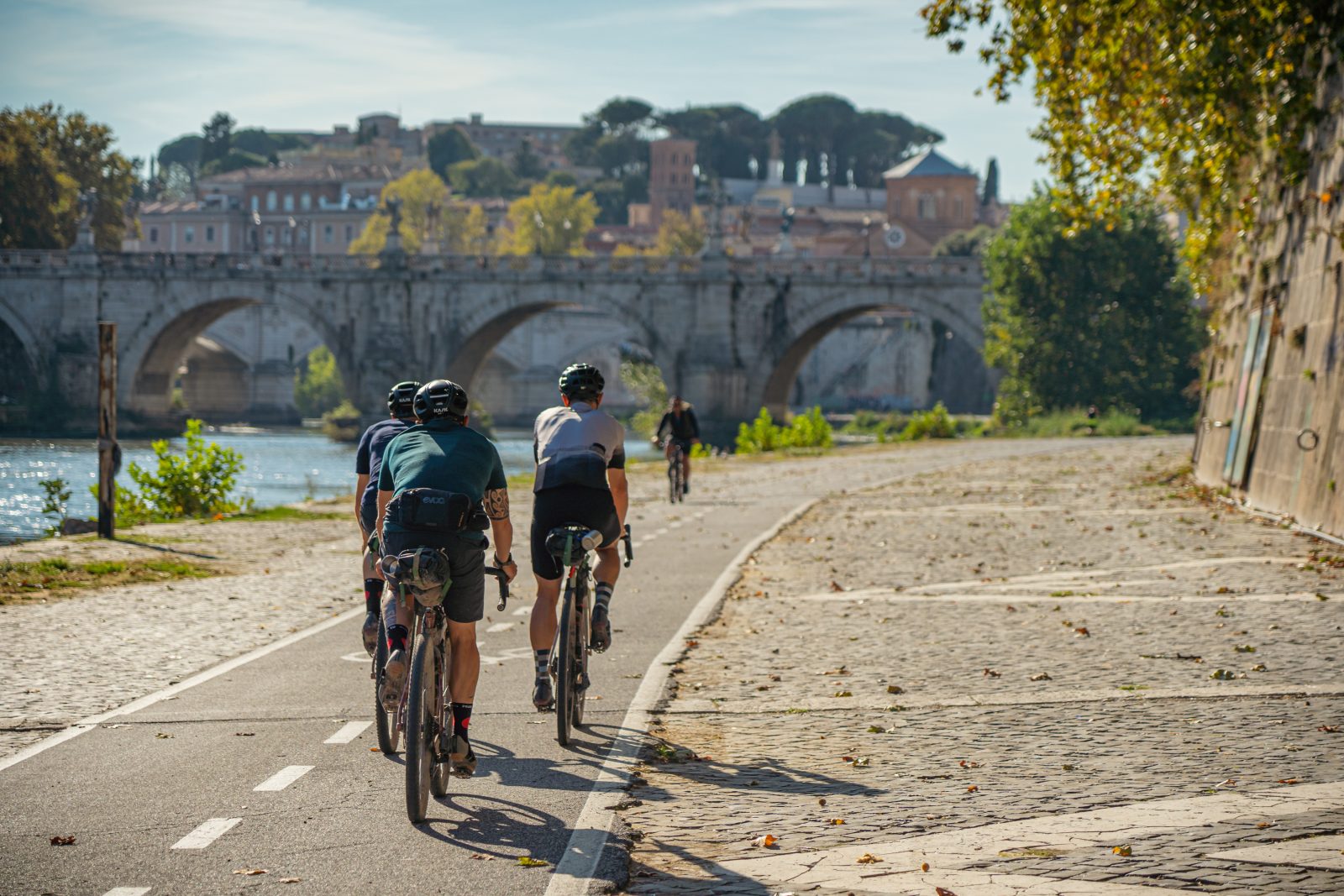 Central Florence is a maze of one-way streets; it is a wonder anyone can get anywhere. We wind our way through them directed by Komoot and a helping of local knowledge from Matteo and Andrea of the Rolling Dreamers; our guides for this four day trip. 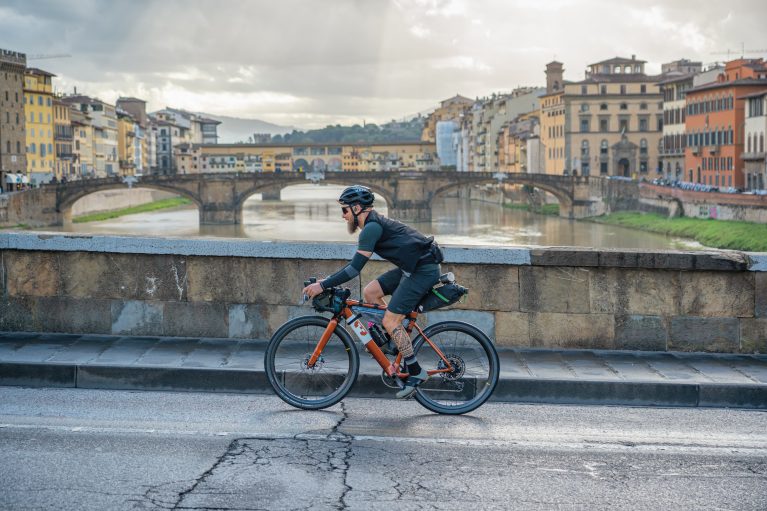 When we cross the river Arno, one of the classic views of the city reveals itself: the Ponte Vecchio connecting the two halves of the city. That will be our route out and on towards Rome. But not yet. First, we have breakfast waiting. 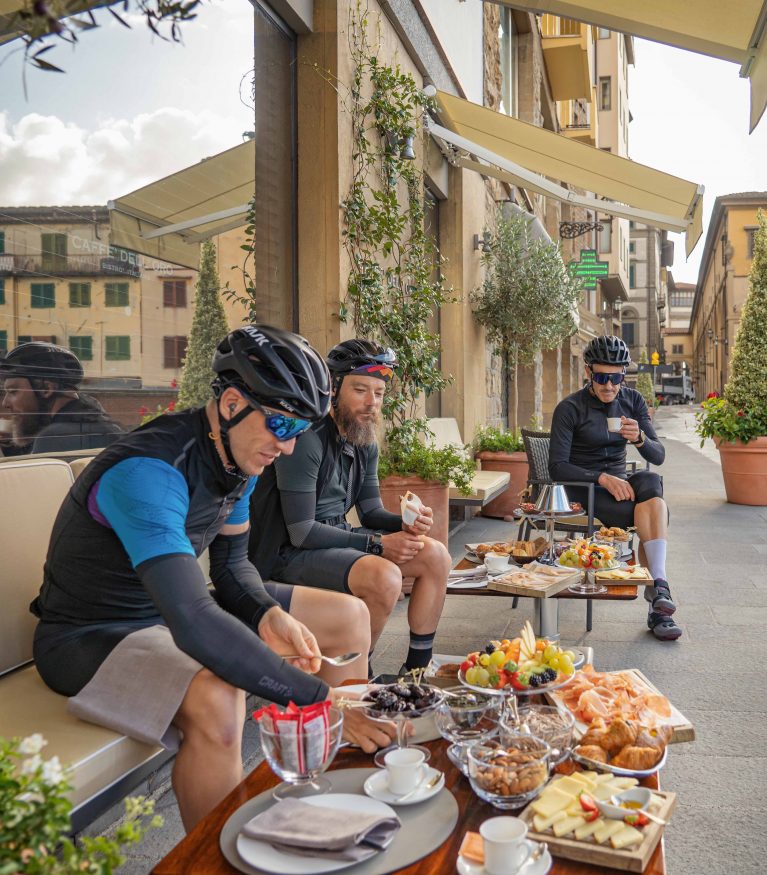 The Portrait Hotel Firenze has provided a breakfast spread that is so abundant one suspects they know about the calorie burn we have ahead of us. This hotel will be the first bookend of the trip with the Portrait Roma, its sister hotel forming our final stop in Rome. Having had our cappuccino or espresso (and in some cases both – you know who you are) we roll across the Ponte Vecchio, departing through the Porta Romana or Roman Gate – the most spectacular and grand of the city gates; built in such a way that travellers in the past dong the opposite journey to ours would be impressed arriving in Florence even after experiencing the magnificence of Rome. 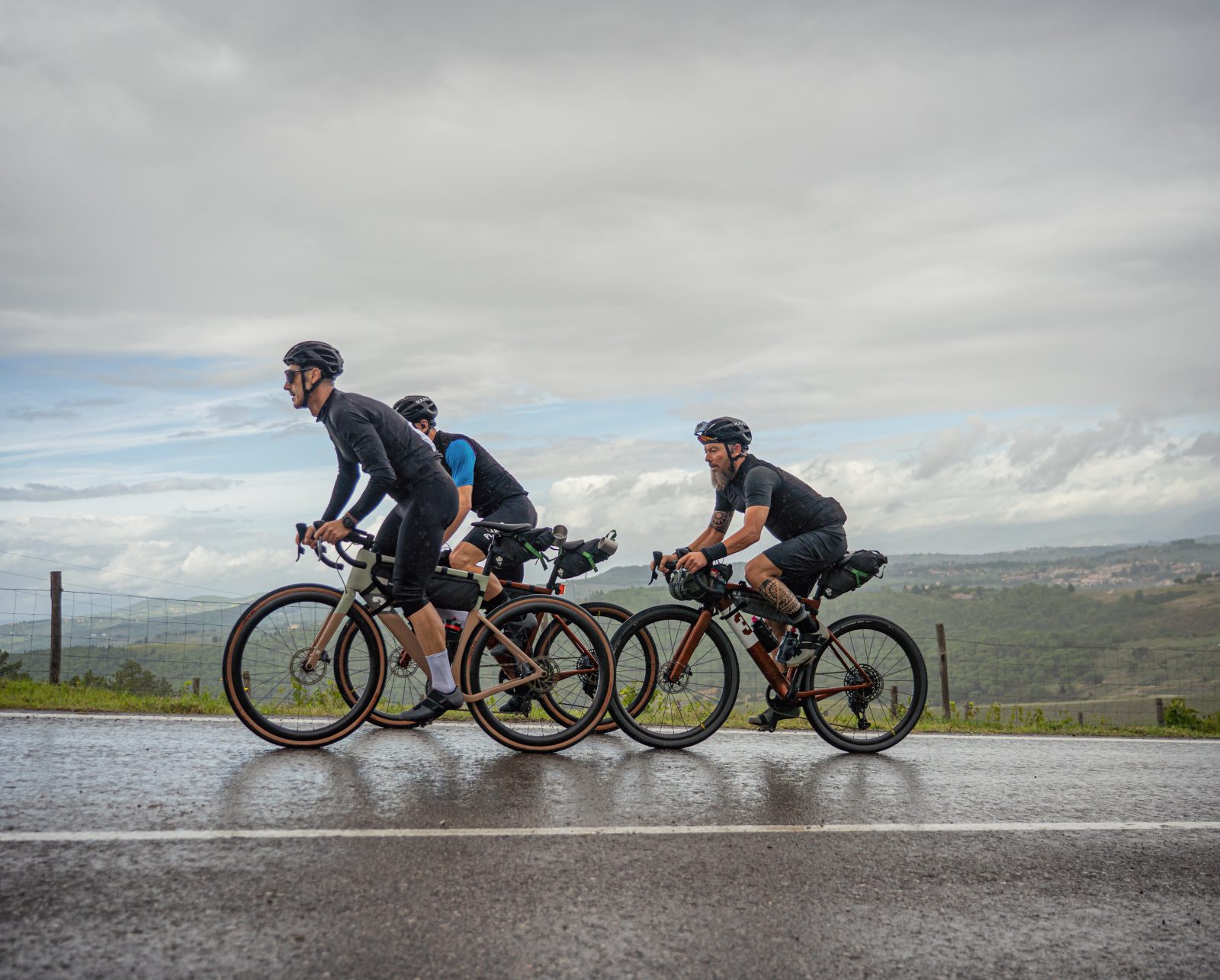 The first climb is mercifully on road, allowing for a warm up before we hit the first part of gravel. Almost immediately after leaving the city, the vineyards begin. The regimented lines of plants will be our backdrop for the entire day as we go through three of the Chianti region. Considering rainfall is their only source of water, the vineyards are surprisingly green. The silvery ever-green of the olive groves accompanies it and classic Tuscan views are to be had in all directions.

The first gravel segment arrives and there is something special about riding the Strade Bianche of Tuscany on a gravel bike. Many locals consider Tuscany to be the spiritual home of gravel or mixed-surface riding. Our total kilometres will be slightly weighted, 55% in favour of gravel. Or at least that’s the plan. If you have ever seen a photo of Tuscany, you can imagine the terrain: hilly, yes but nothing approaching the ferocious climbs of the more mountainous north. Even the bikes in 1x build have all the gears needed for the route. 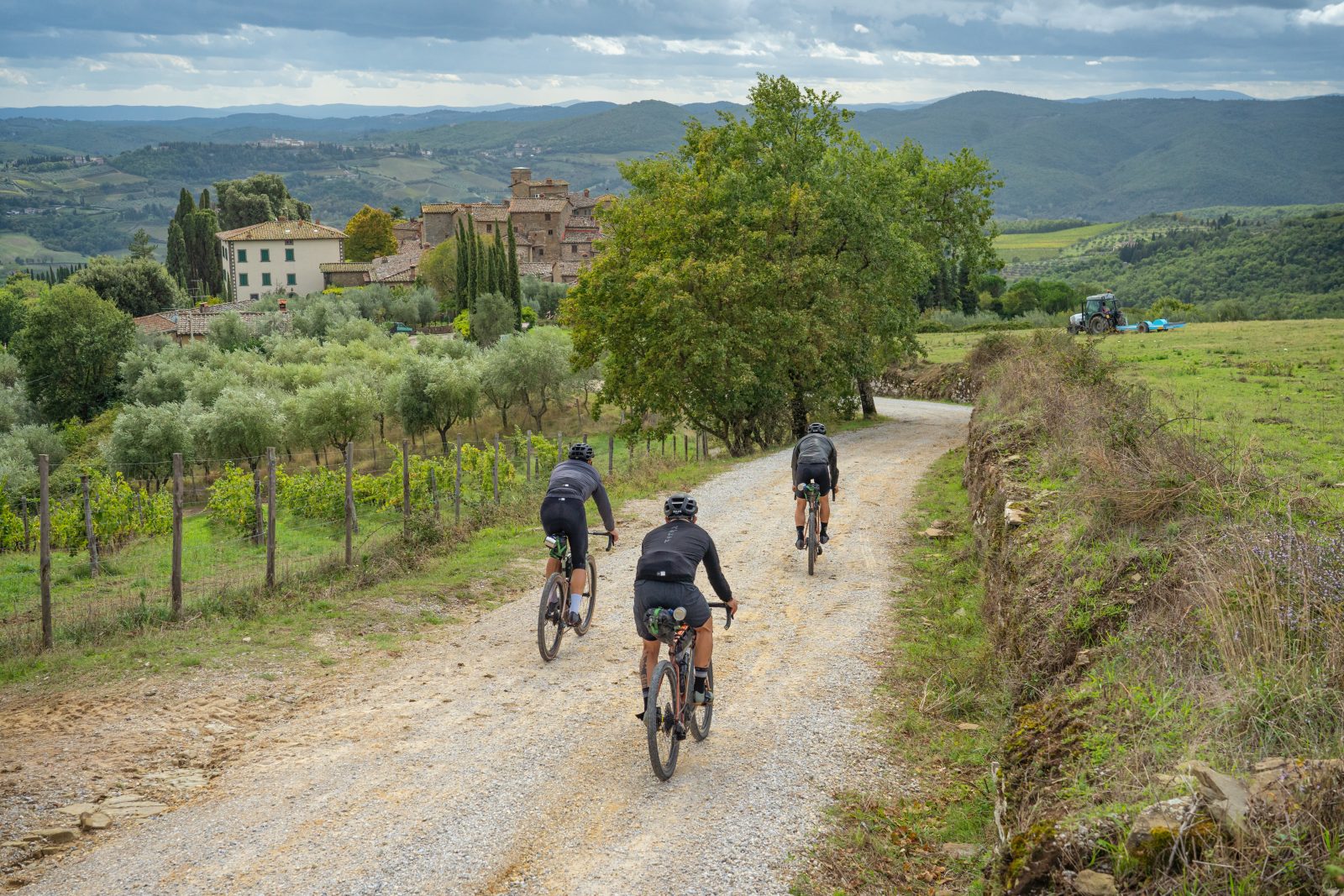 Italian life revolves around mealtimes which can be quite strict in when they start and finish but fortunately the people of Volpaia are not such sticklers and as soon as we arrive we order “pasta al pomodoro” – pasta with a simple tomato sauce – for everyone. It’s hard to think of a national cuisine that better matches the nutritional requirements for cycling. We cannot get too comfortable, more KMs are to be done. There are tiny hamlets, individual dwellings and lazing Pastore Maremanni – Tuscan sheepdogs – that stare at us indifferently as we ride past. As we approach Siena the landscape begins to change. It is almost imperceptible from one minute to the next and yet by the time we begin to approach Siena as the light is failing, the hills are changed from those of this morning: they are wider, more open and more expansive.

In the last of the daylight we arrive at Ca’Bianca where Simone who runs the hotel will also be making us dinner. There is no menu, so no decisions to make, just fine local seasonal food, allowing for any particular dietary requirements of course.

After a superb breakfast (again prepared by Simone) we are immediately onto narrow gravel roads lined with Cypress tress. It is today that we will join the Via Francigena and from here on, we follow it as closely as possible all the way to Rome. 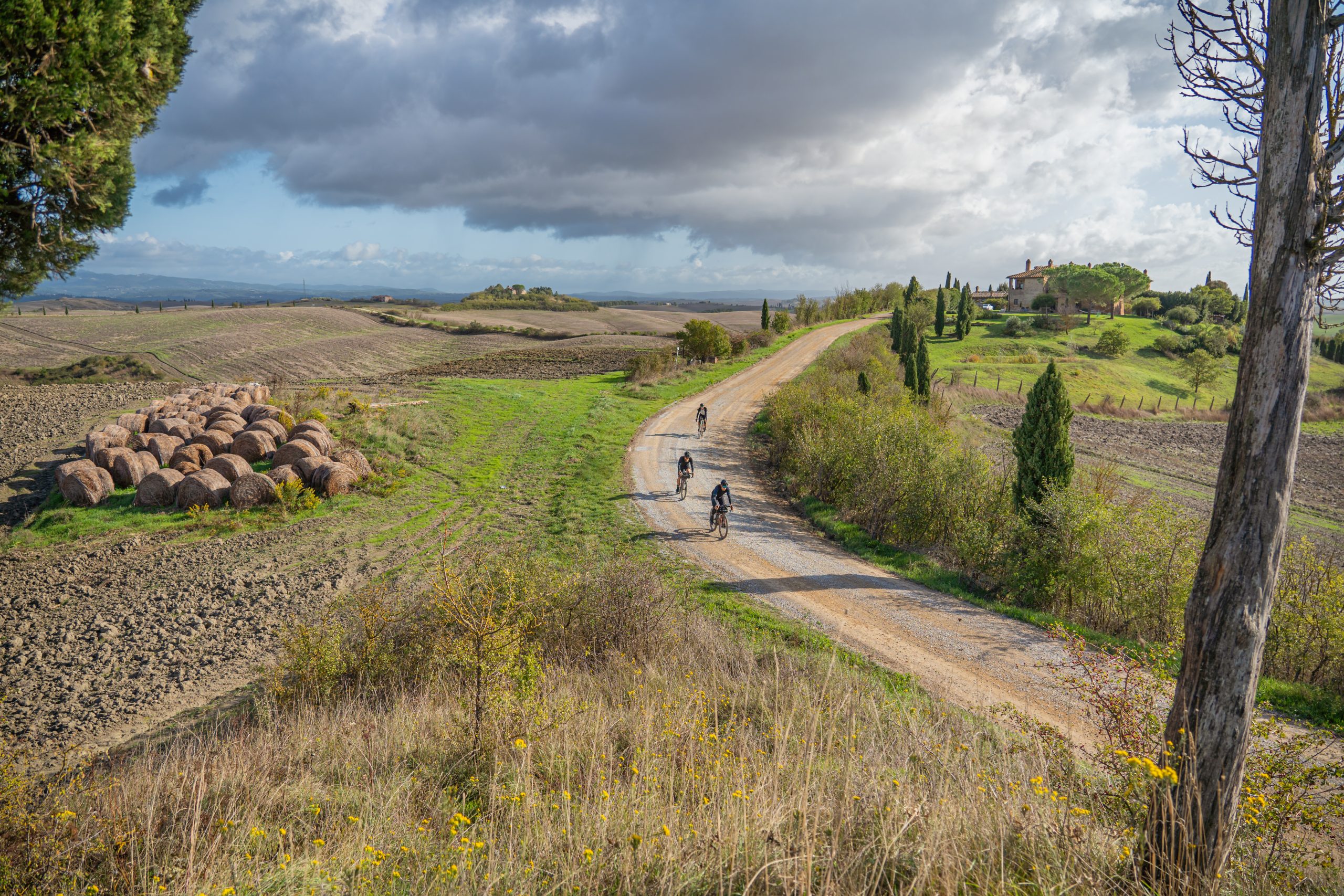 The views stretch even further than yesterday. This is classic Tuscany. It is here that the most famous photos and films of the region have been taken or shot. The road surface is pretty good though heavy rain can make the gravel roads perilous for the inattentive, the water carving deep lines across them.

We ride on, past Buonconvento the home of Nova Eroica, through more vineyards that skirt the hill top town of Montalcino, stopping at some of the many water fountains that line the route. We pass walkers, some who greet us, others whose headphones block the sound of our approach. Everyone here is on their own personal journey; that is one of the things that makes the Via Francigena so special: everyone rides or walks the same path but they all have unique thoughts, experiences and reflections at the end. 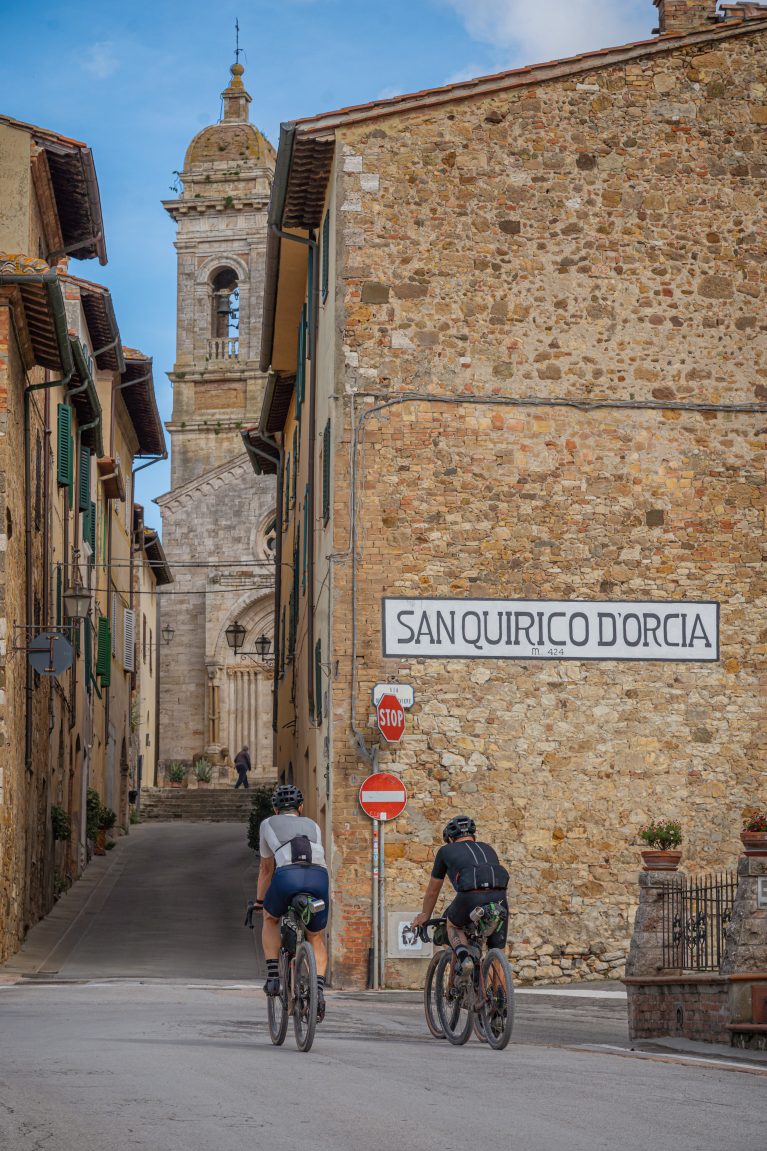 After climbing another hill, we see San Quirico D’Orcia in the distance and that means lunch is near. Before we can eat, there will be the short and steep climb into the town itself. Once that is done, we ride through the narrow streets that seem unchanged by the passing of time.

Today is a long day and there is only time for a panino (prosciutto and pecorino, that seems to be the locals’ choice) before we continue to Vignoni Alto – a fine and typical example of a borgo or semi-fortified village. The south gate opens to an immense panorama of the valley below. 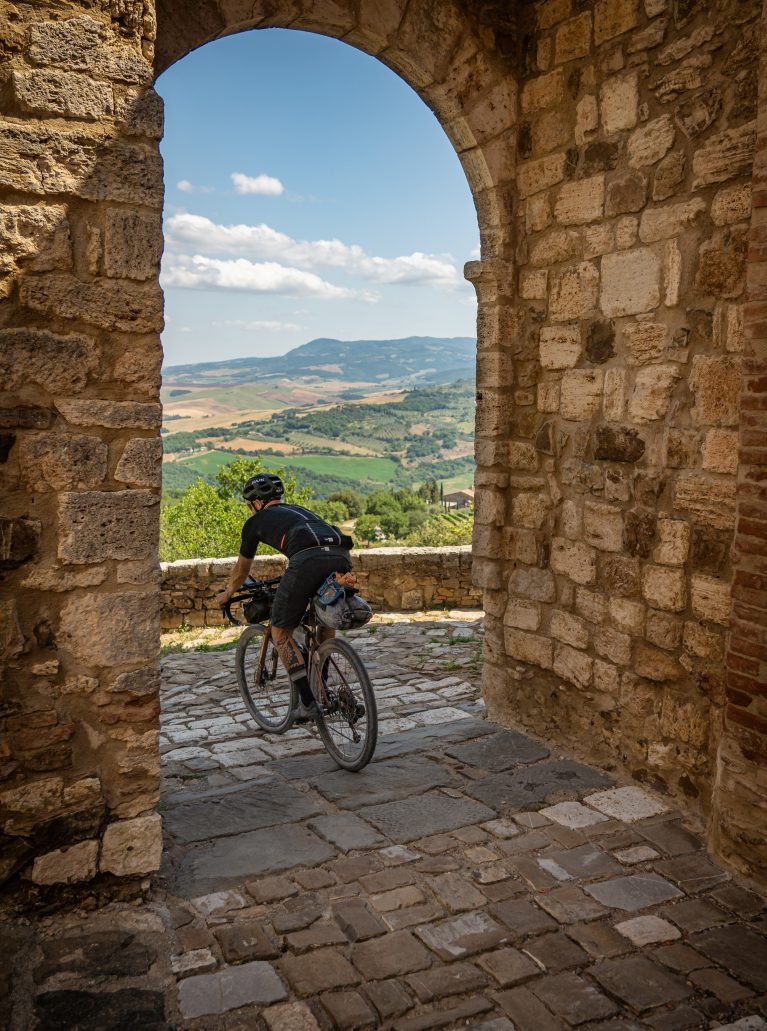 Shortly after a brief stretch on the asphalt road to Rome, the Via Cassia, we enter into Lazio. There is no signage announcing the change of region although it is now dark and our focus is on the more concentrated small, area of gravel road in front of us. When we do finally arrive in Proceno, we are warmly greeted by the Contessa whose family inhabit the castle and also run the Albergo Diffuso that will be our home for the night as well as providing our dinner. 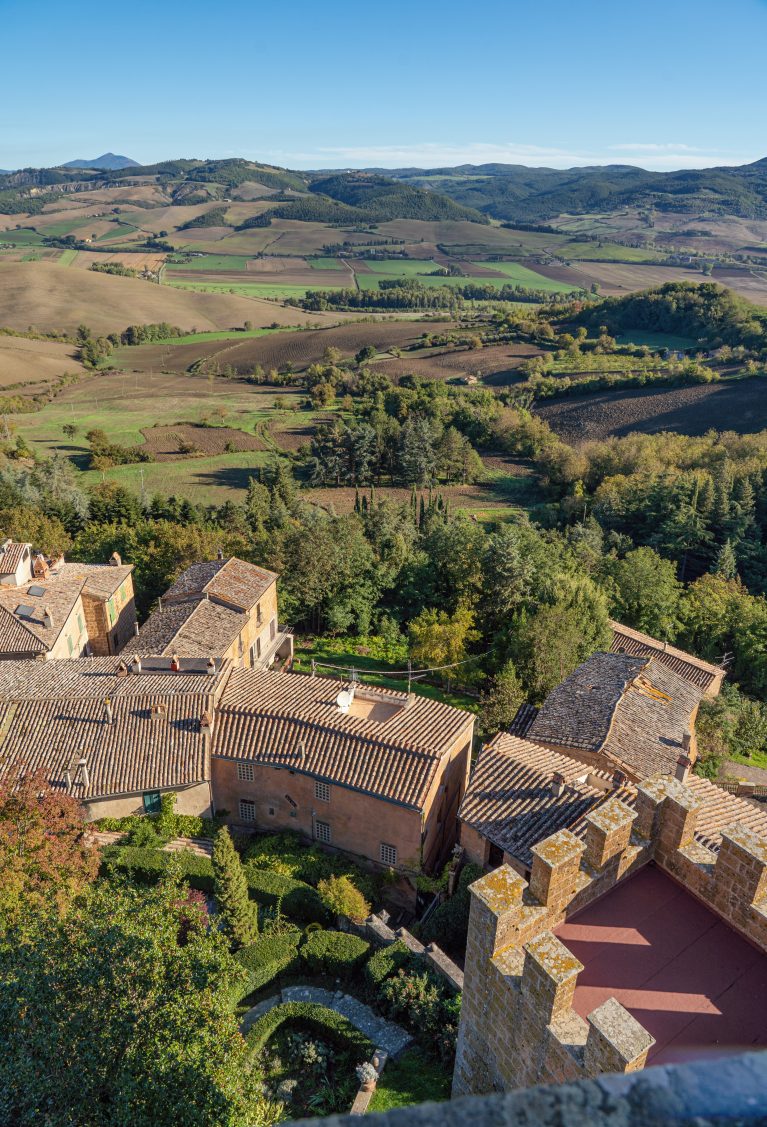 That dinner is, of course, another multi-course marvel: a cured meats and cheese starter, a first course of pasta and a second course of pork and potatoes. Everywhere we go there is a clear pride in the local food and a seemingly innate knowledge of what is in season. We retire warm and content. 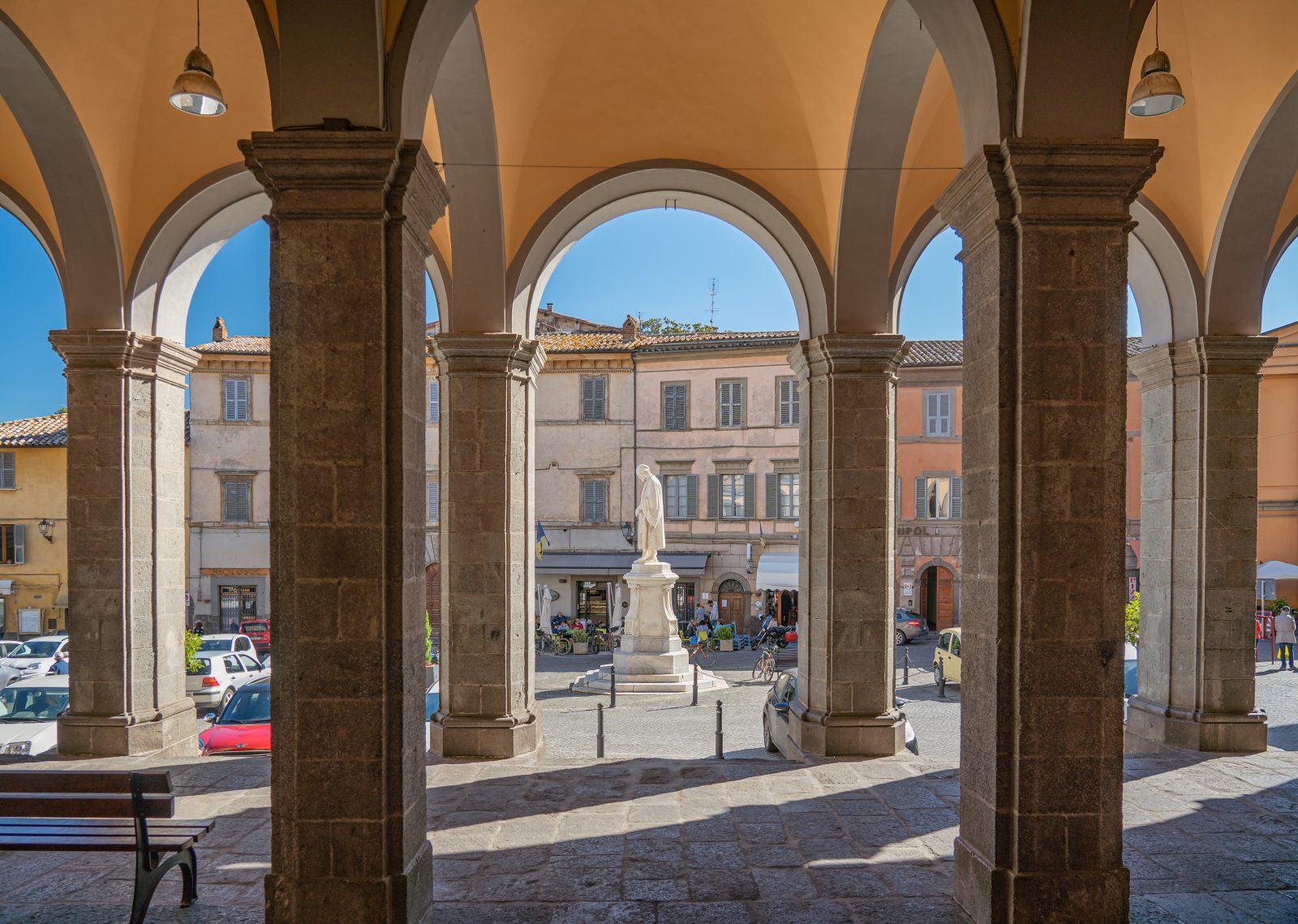 A coffee stop after just over ten kilometres seems like a very civilised way to start the third day. Most of that is downhill too. A quick cappuccino in the magnificent main square of Aquapendente and we are off again towards our lakeside lunch location at Lago di Bolsena. 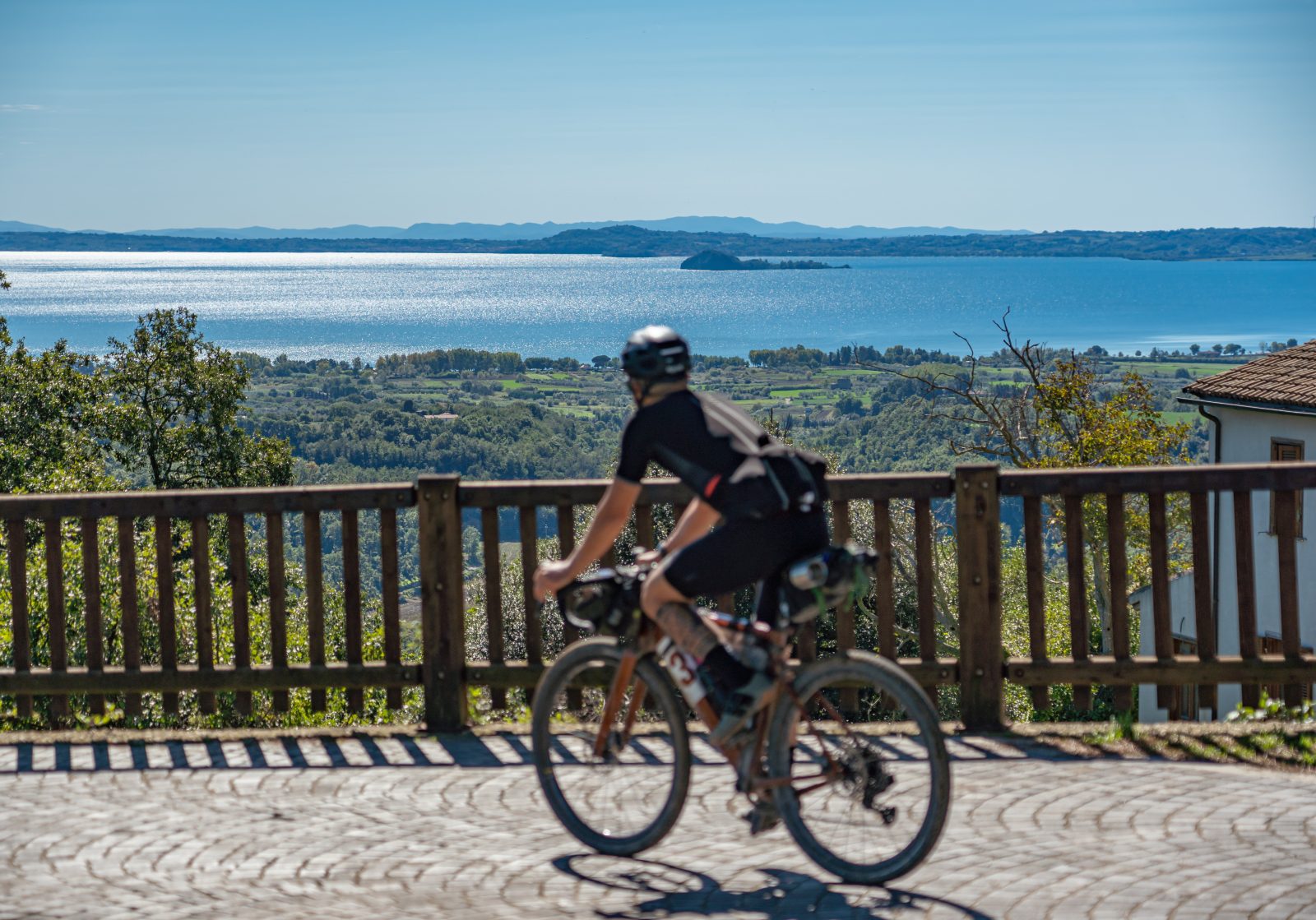 We crest the hill and the sun shimmers off the surface of the lake in the distance. We descend down and stop at a lookout spot above the lake for some photos. More downhill into the town of Bolsena itself and we take a seat by the lake. The rhythm of the journey is starting to become more regular now, it is starting to feel like normality; you have breakfast, get on your bike, have lunch, get back on your bike… 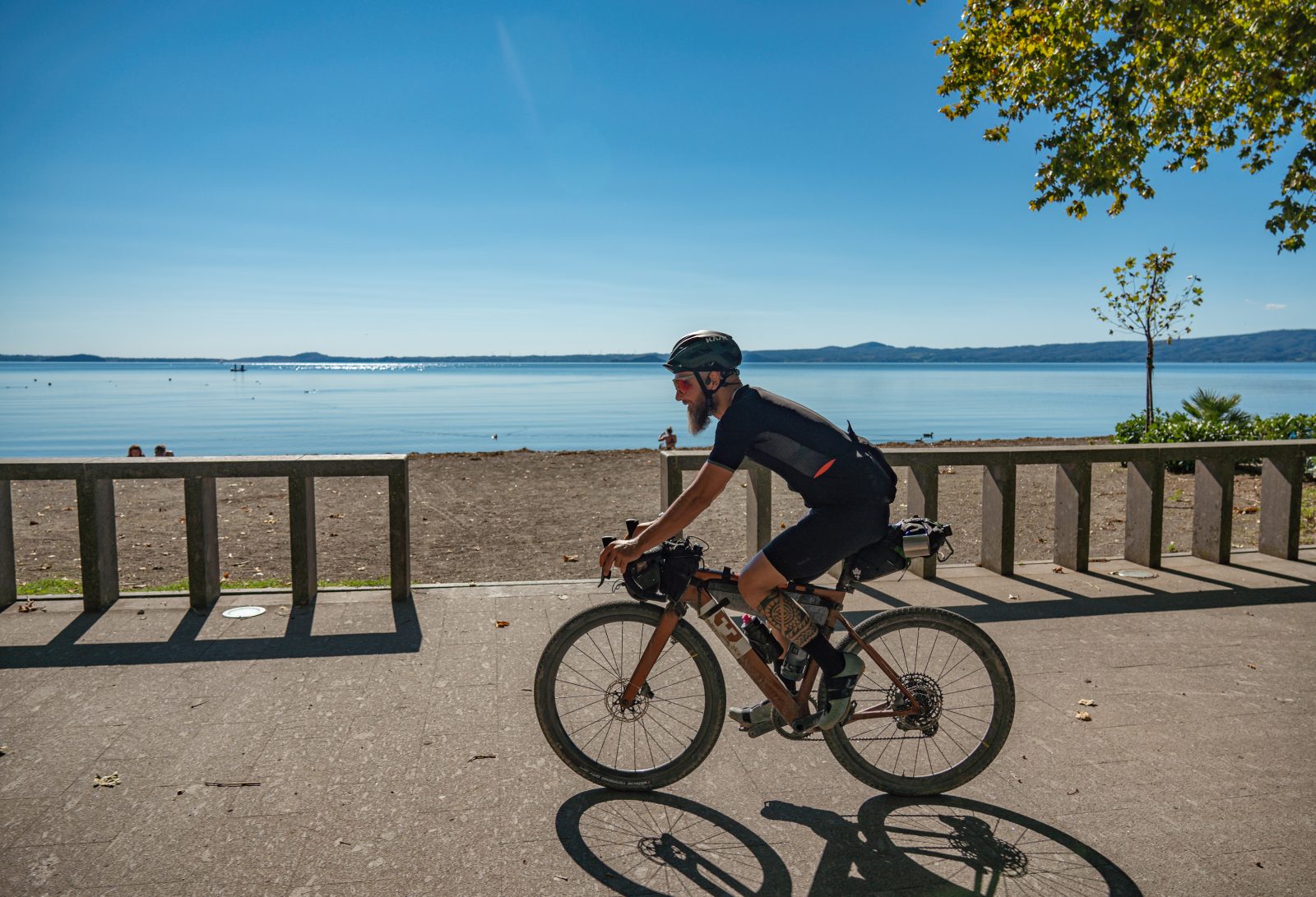 After Lago di Bolsena the next waypoint is Viterbo but before that we will ride through Montefiascone, another town with a spectacular old gate guarding the entrance to the old town. 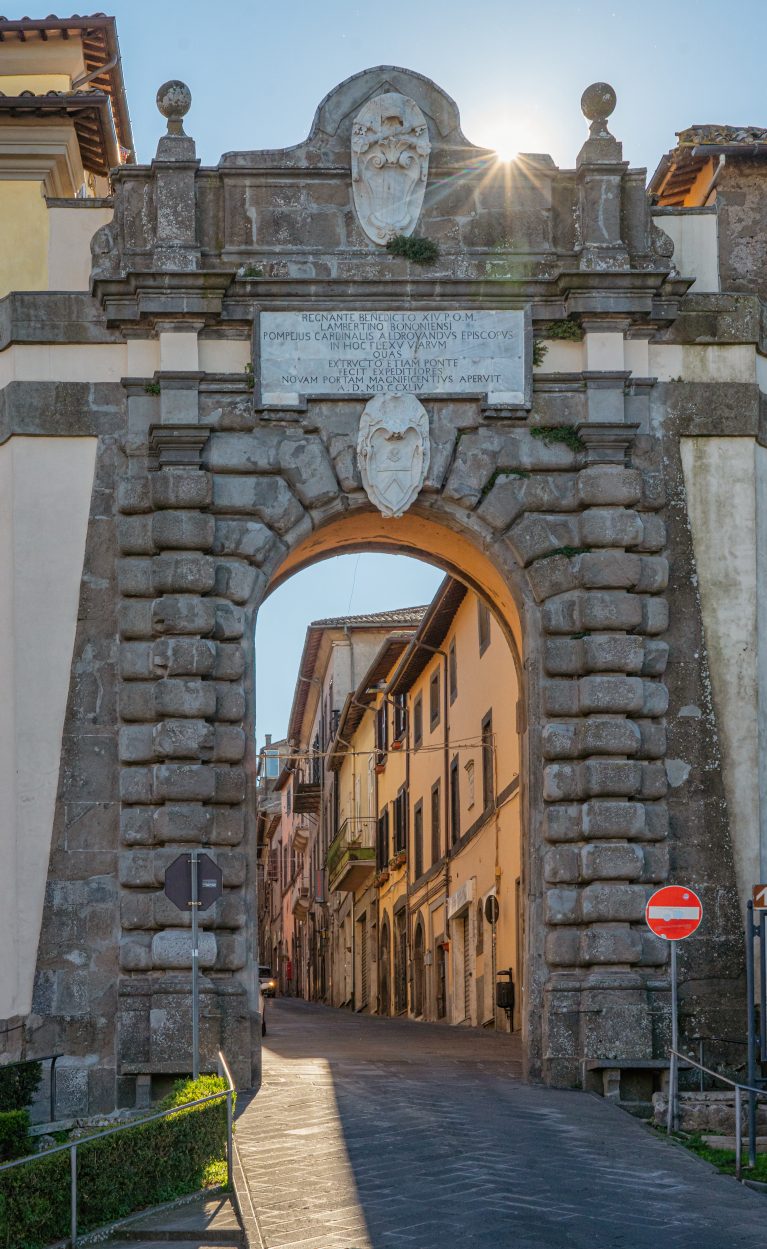 After Montefiascone, there is a downhill but unlike many of the gravel
roads we have previously ridden this one is made of large cobblestones. At about half a metre (one and a half feet) across they cause the bikes to buck in a bone-shaking action. These classic Roman Roads were clearly built for longevity although there is the occasional wheel-swallowing hole where a stone is missing.

Leaving the Roman Road behind we are back on hard-pack gravel on a flat plain that extends until we reach a road that is carved into the rocks. Mini statues of the Virgin Madonna adorn small shrines asking for blessing and safety for travellers. Perhaps we did not give her enough heed as one of our group punctures soon after. Our hopes of a quick fix to the tubular tyre are dashed as the sealant, instead of staying inside the tyre, decides to spray out and give us an impromptu foam party by the side of the road. Once that is cleaned up, we add an inner tube and we are off again. 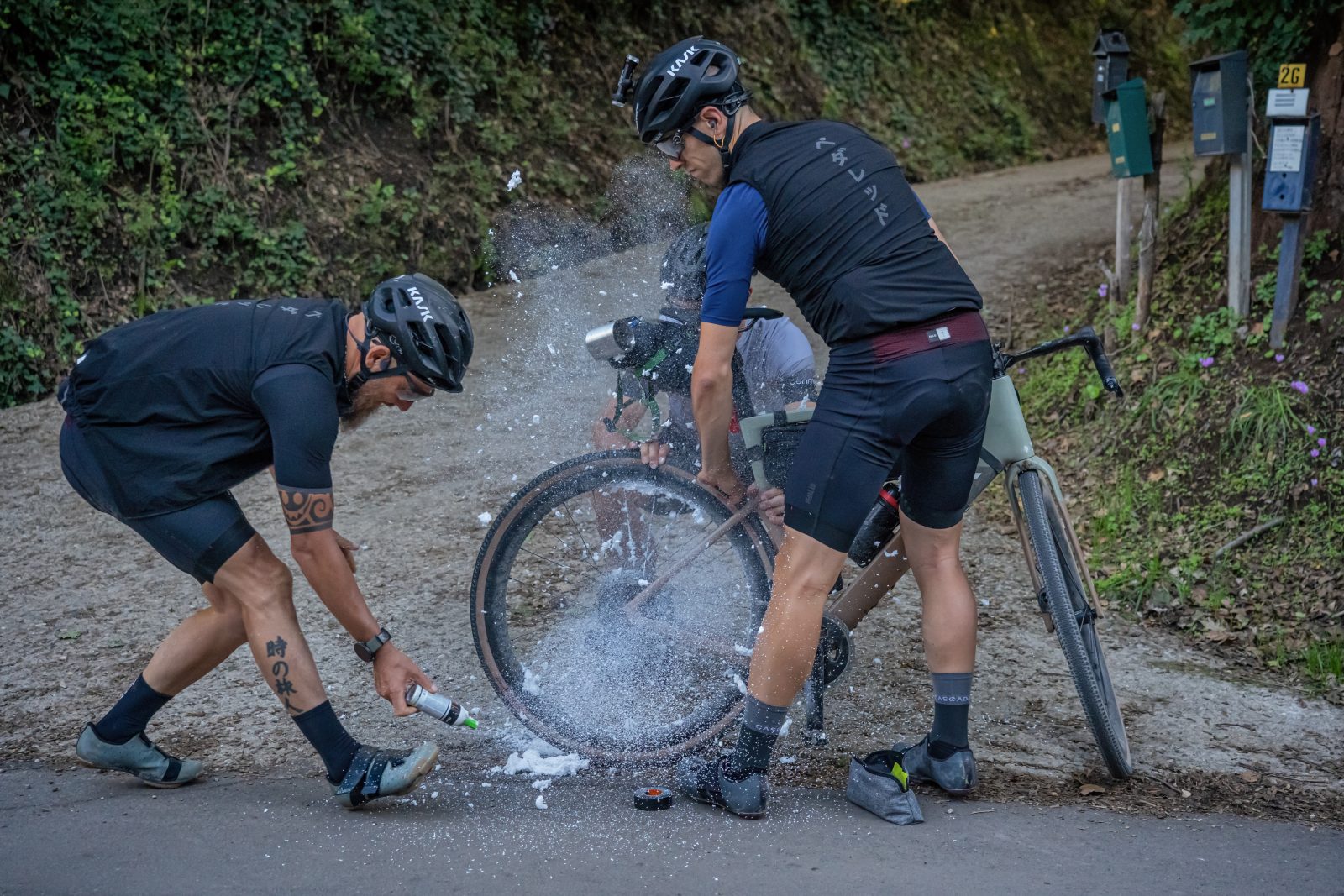 We are treated to the most gorgeous sunset but it is too soon: we still have narrow paths to navigate that would be too treacherous in the dark. The puncture and subsequent foam party has set us back too much and so the decision is made to leave the Francigena and do the last 20km on road. 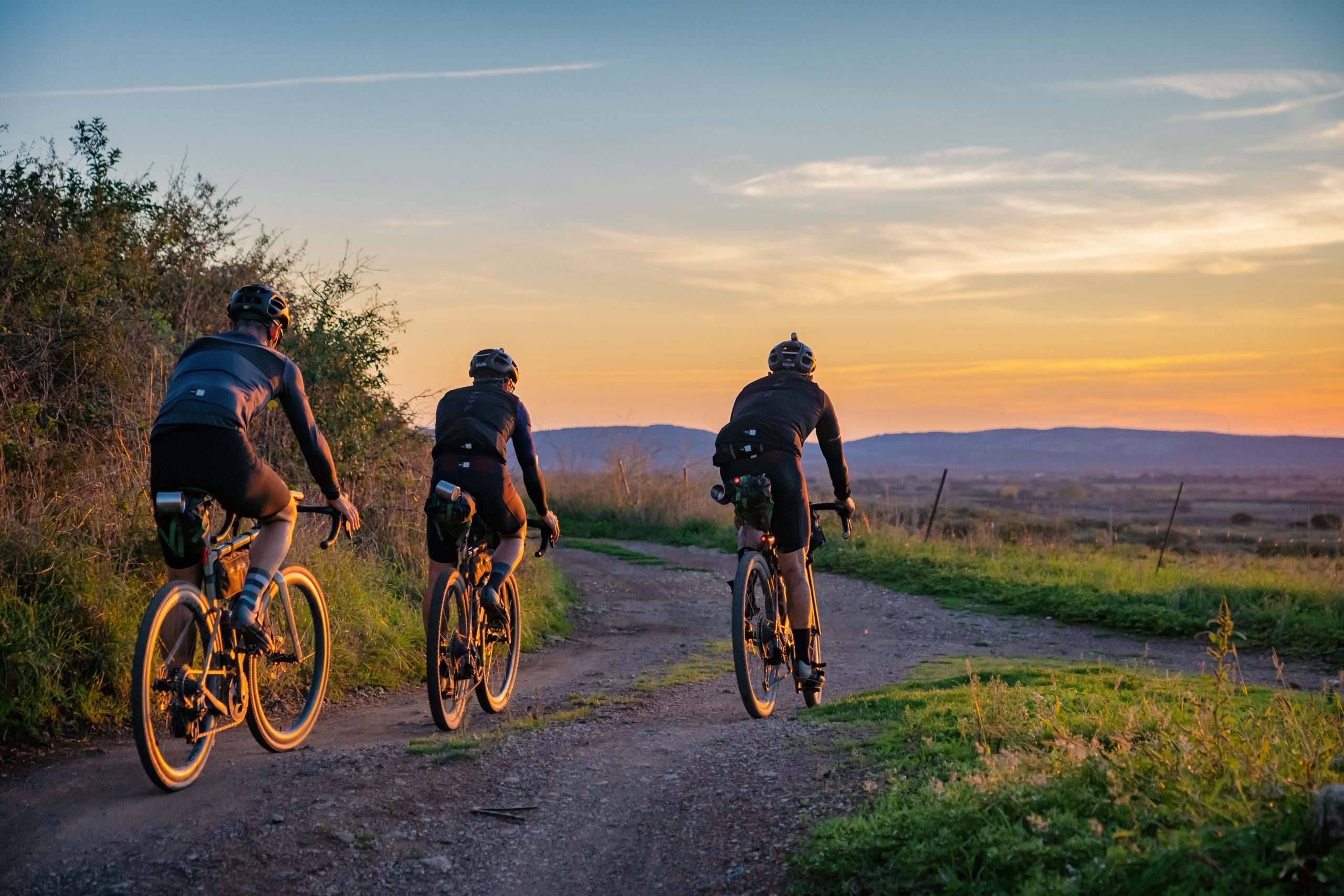 The morning of day four greets us with the view of the hotel which we could not appreciate the night before. Housed in a former convent, the large property is right next to the Francigena so it is a simple few hundred metres of road until we are back on track. 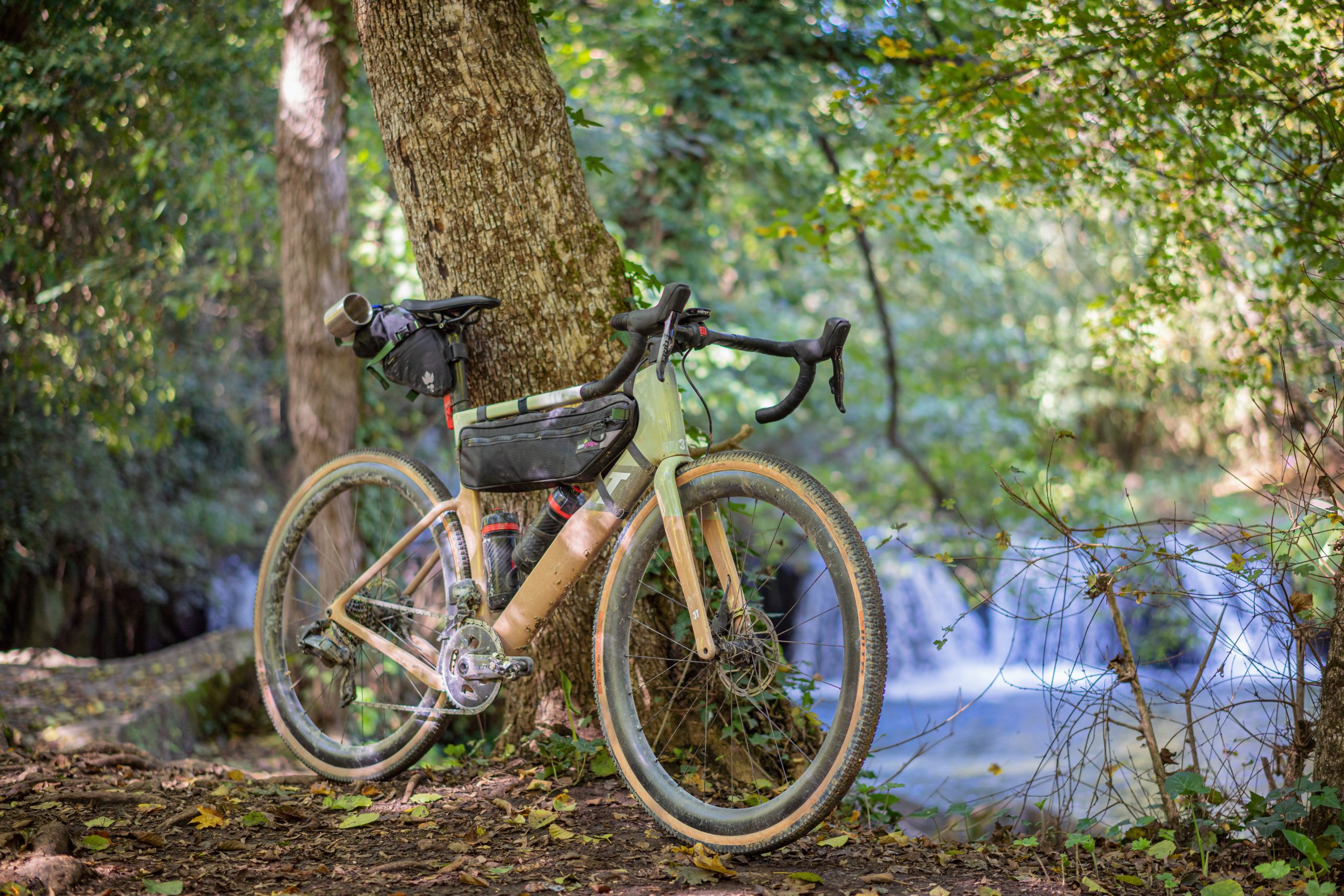 Our first stop of the day seems perfectly named: Cascata di Monte Gelato – the waterfall of ice cream mountain but there is no ice cream and no mountain. There is, however a very relaxing stream and waterfall.

The landscape of Lazio is different again from what we have seen so far. Shallow climbs and false flats abound with the occasional crazy steep ramp. It is up one of these that we must go to enter Campagnano di Roma: 200m at 16% which with the bags on the bikes feels like more. 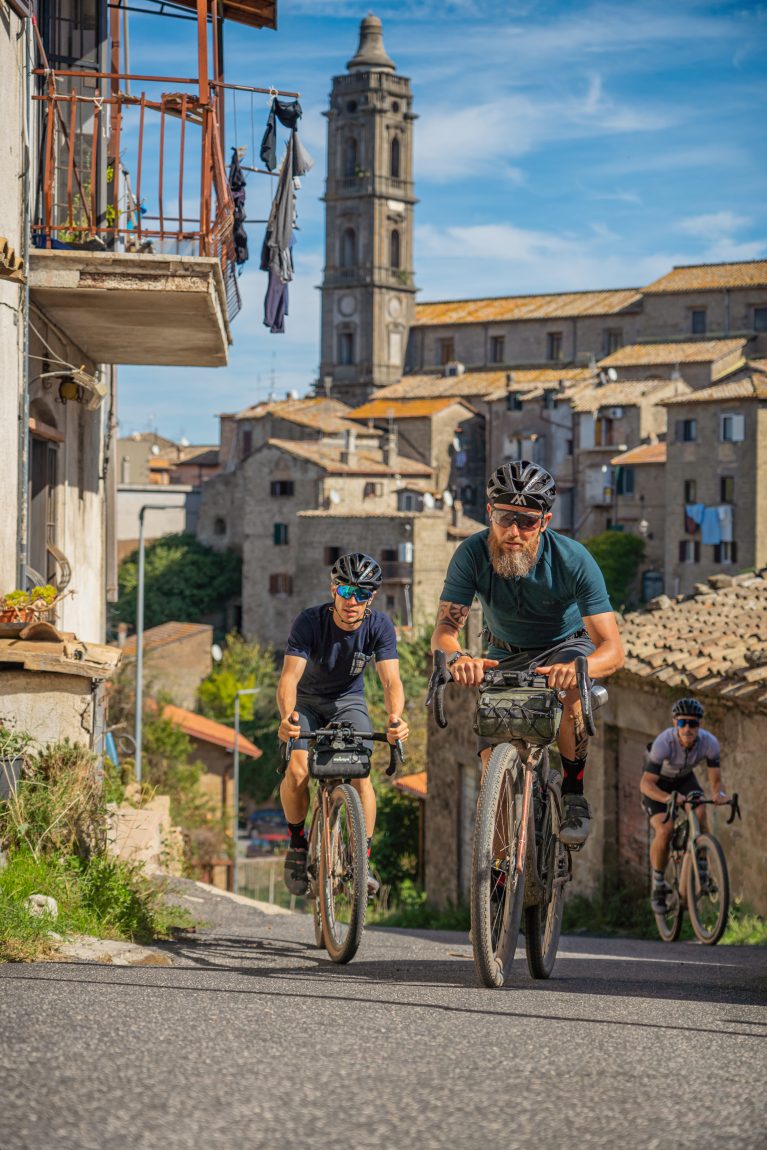 On some bike packing trips, you suddenly arrive; your journey abruptly ending but not here. the last 20 or so kilometres of flat cycle path allow a long moment of reflection and also satisfaction. As the cycle path meets the Tiber, we roll under bridges, the reflections of the water shimmering on the underside of the arches and the imposing Castel Sant’Angelo looms over the river, dwarfing us as we cycle past. 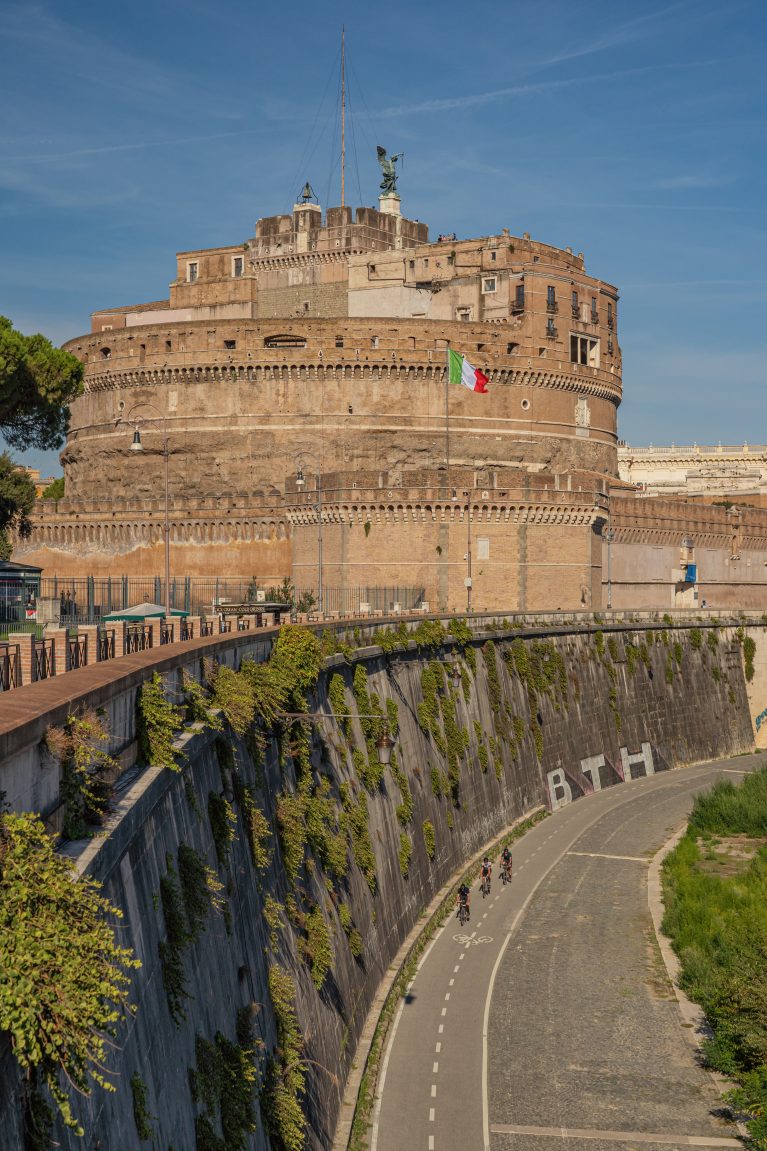 There is a short staircase, the bikes must be carried and then just a kilometre of Roman road to contend with as we are ejected back into the modern world. we turn a corner and the immense, arrow straight road to Saint Peter’s Basilica is immediately in front of us. The wide avenue is an opportunity for reflection, congratulations, back slapping and, this being the modern world, a selfie or two. 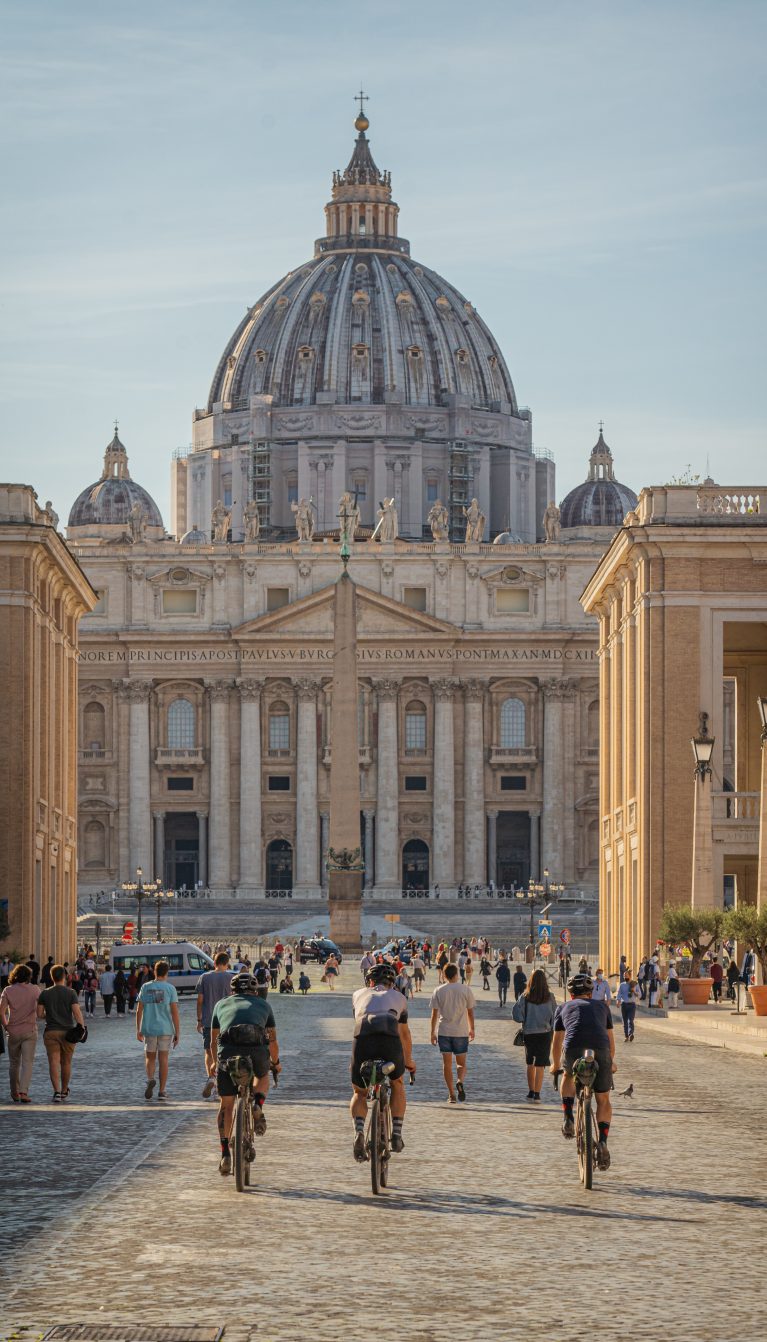 Photos (and yet more selfies) in front of Saint Peter’s and then we cruise through the city street to our end point, the Portrait Hotel Roma where a cold beer awaits accompanied by a view over the city. Satisfaction in the moment and memories for the future; it is a privilege to ride a route so steeped in history. It is truly a personal pilgrimage, even for those without religious convictions. If you tell people you ride from Florence to Rome, they will immediately have some idea of what you have achieved but as to what you saw, what you felt and what you experienced, the only way to know those things is to experience it for yourself.

On road bikes you travel between human habitations; by necessity following man made roads that join our urban areas. But it is with gravel bikes that we can explore more of the natural world: the waterfalls, the lakes, the less traveled paths…

Whenever we stop, our bikes drew attention and questions: what bikes are those? Are they road bikes? No, they look like they have mountain bike wheels..! It is easy, when immersed in the cycling world to see gravel bikes everywhere. It is the latest thing; everyone has one or wants one. But in these parts of Italy they have yet to enter into the awareness of the general population.

It is on a trip along an ancient pathway that these modern marvels shine: they carry our kit and still provide the fun of a good bike ride.