With 82 million inhabitants, Germany is one of the most densely populated countries in Europe. Nevertheless there are untouched regions. Germany consists of 16 federal states, the most famous being Bavaria. On our bikepacking tours, my friend Dani and I have decided to present outstanding and sometimes forgotten places.

The first of our gravel tours takes us through the Hallertau, the largest hop-growing area in the world. The Hallertau is located in the southeast of Germany. About one third of the hops produced worldwide come from here. In small settlements the people there live largely from agriculture and hop growing. To the north is the Donau, the second largest and second longest river in Europe. The Weltenburg monastery is located along it. The monks of the monastery have been brewing beer there for 1000 years and the brewery is therefore called the „oldest

monastery brewery in the world“. At the northernmost point of the Donau is the city of Regensburg. First traces of settlement date back to around 5000 years before Christ. The Steinerne Brücke (Stone Bridge) in Regensburg is a masterpiece of medieval architecture and the oldest preserved bridge in Germany.

We start our tour in the cathedral city of Freising, north of Munich Airport. Our way leads us through the Hallertau, which is dominated by agriculture, to the Weltenburg Monastery. The Hallertau (also called Holledau) is criss-crossed by small roads and paths that lead through the hop fields. Hops grow in the fields along metres of high wire frames up into the sky. Beer culture is very important in Bavaria, and there is even a separate purity law, since Bavarian beer is supposed to be made solely from hops, malt, yeast and water. 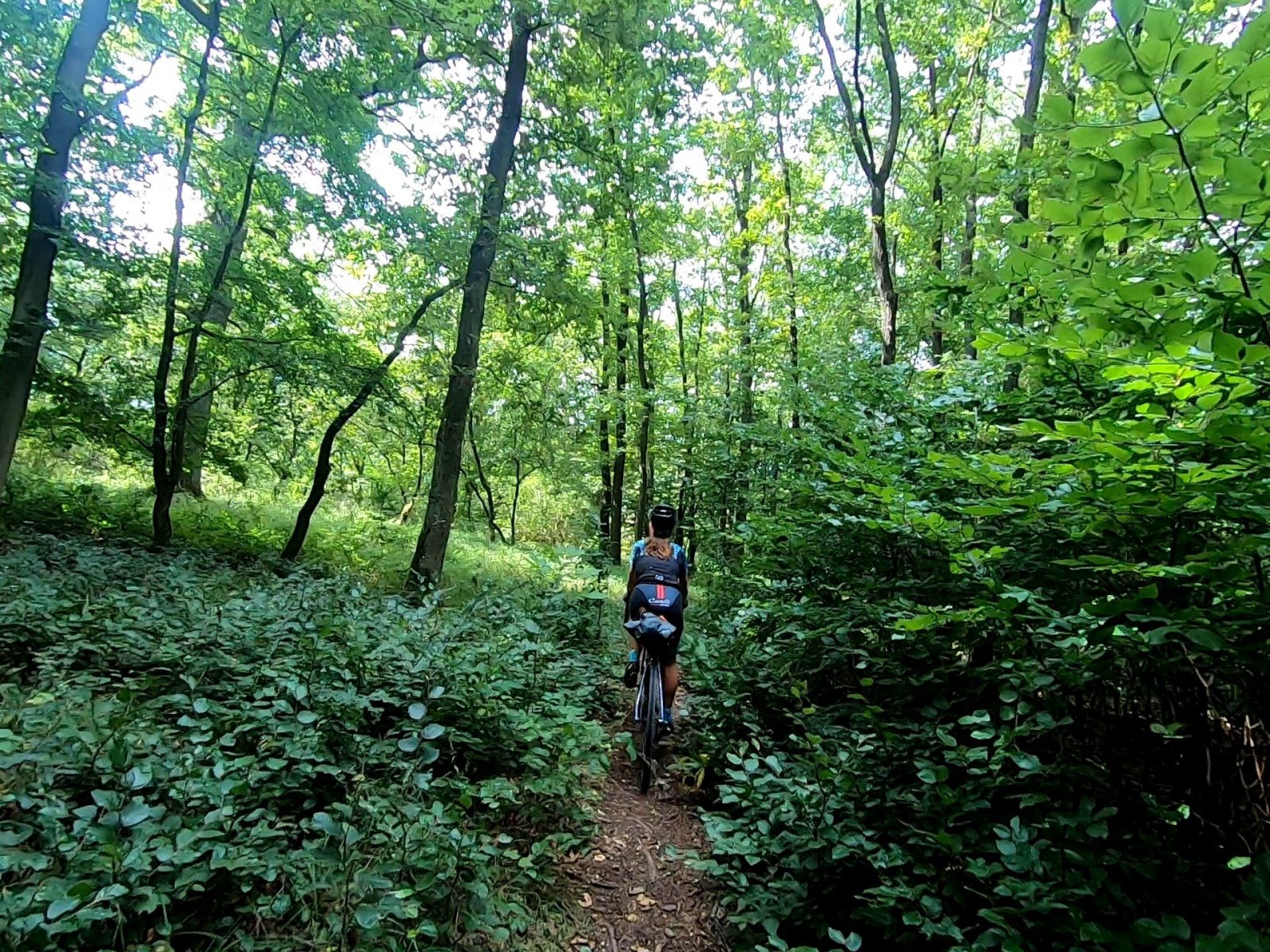 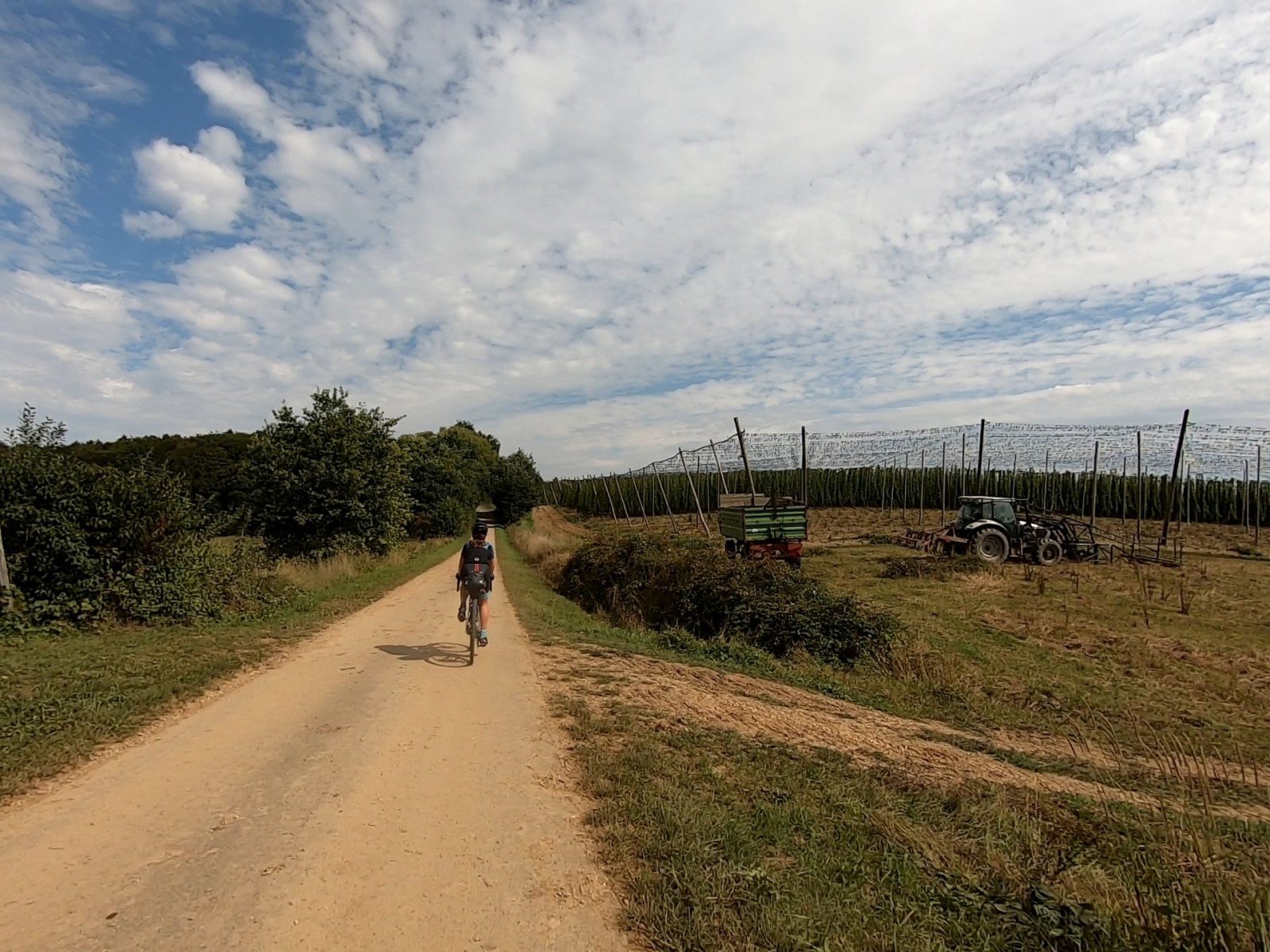 During the harvest season, which takes place mainly in September and October, you can

watch the industrious farmers harvest. The area is very hilly, which gives us a great variety. Our tour is quite lonely, passing individual farms or small villages. From time to time we meet farmers with their tractors. The Hallertau is interspersed with small paths and roads, which are quite narrow. Also the tractors used there are very small, because with heavy, big machines you would not be able to do the work in the fields. The roads we use are partly dirt roads and partly asphalt roads. Because of the harvest there is a lot of dirt and earth on the roads. Now and then there are also metal pieces of wire on the ground, which come from the wire ropes of the hop fields. We stop at one of the farms and watch the farmer harvesting. He tells us that he can clearly see the consequences of climate change on his fields. As I am an agro-meteorologist by profession, the experience is of the utmost interest to me. Especially in Central Europe, nature is suffering from prolonged drought during the growing season. 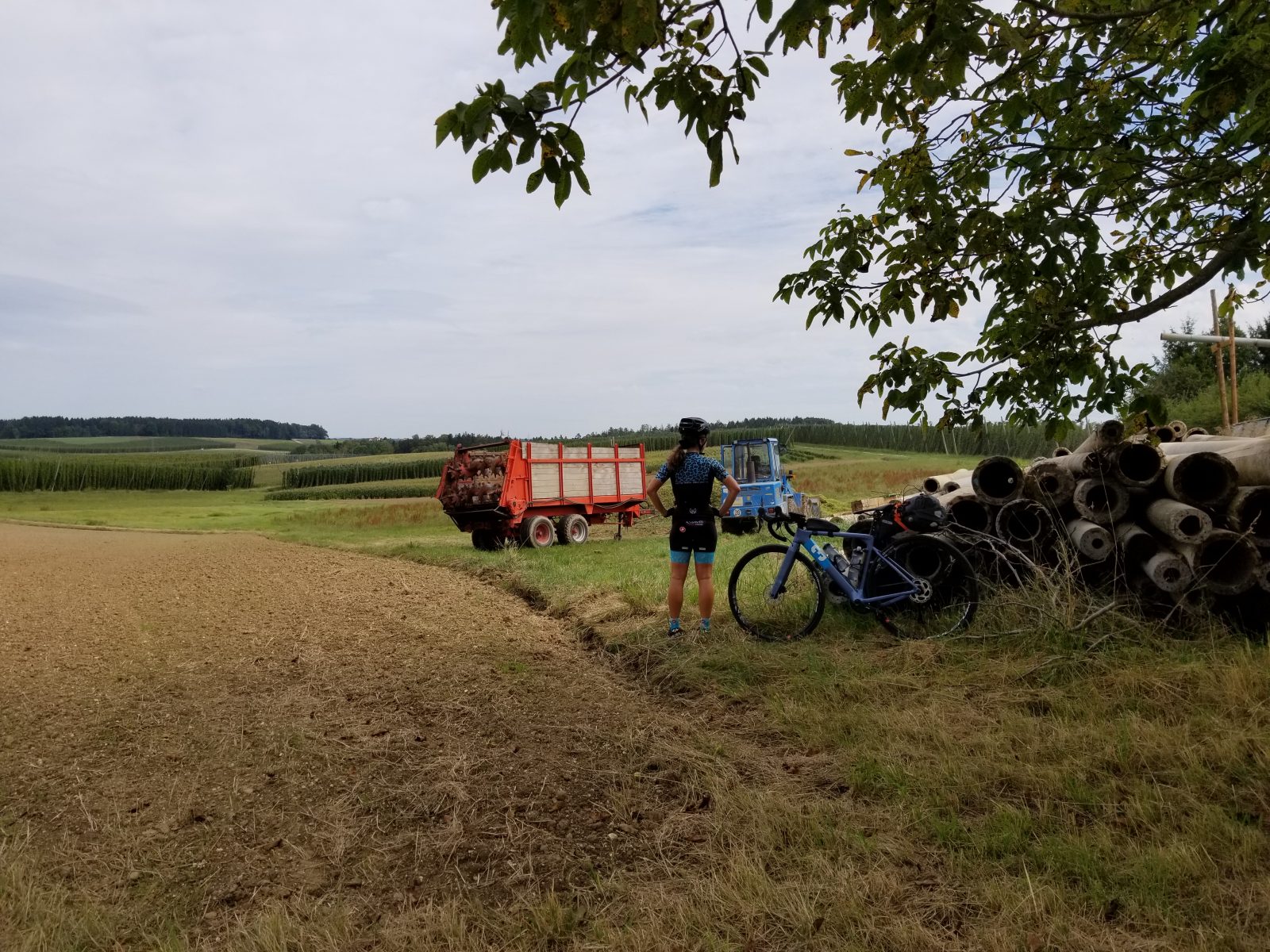 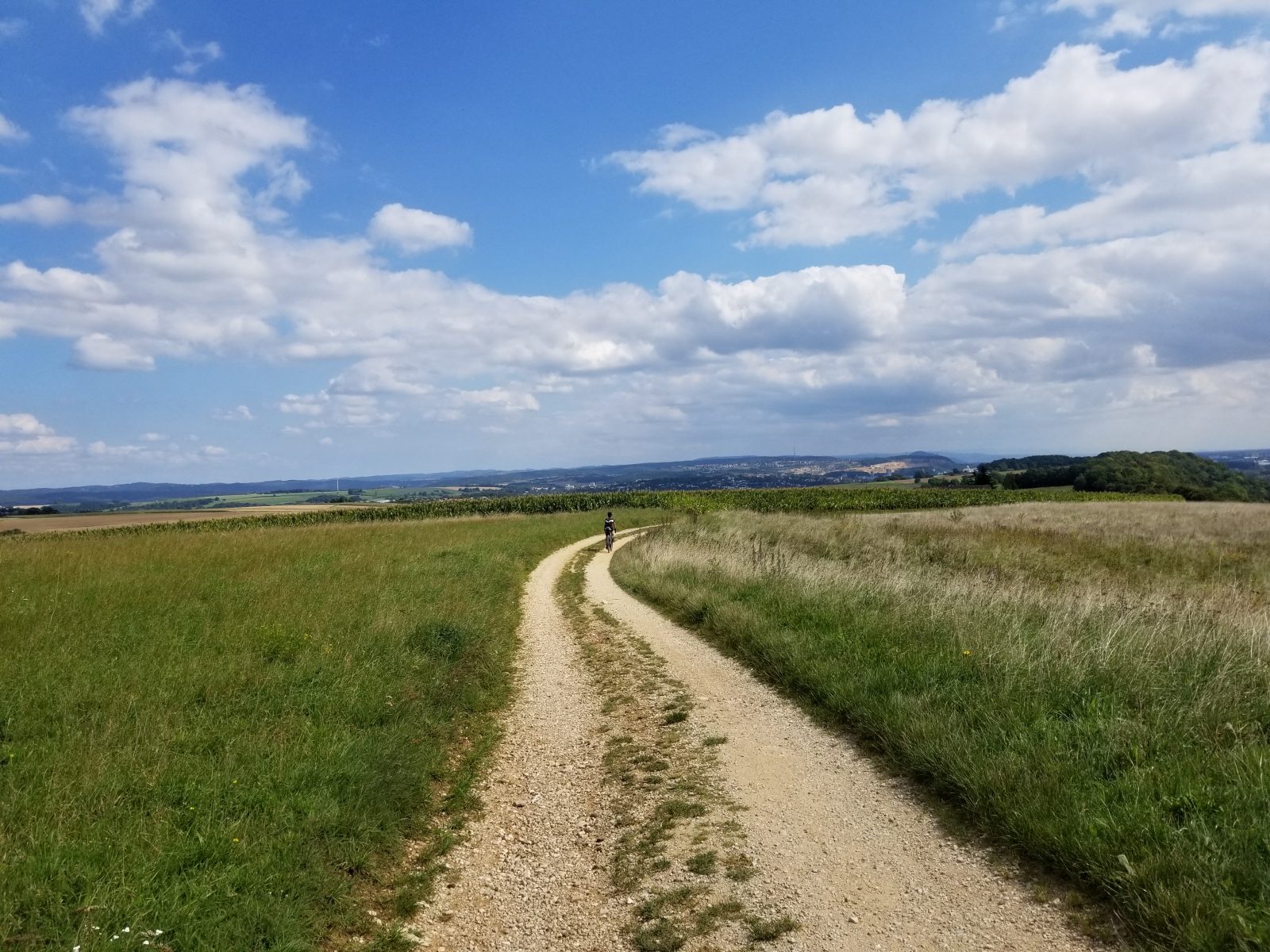 After the rather lonely drive through the Hallertau, we reach the small town of Abensberg on the northern edge, which is famous for its excellent asparagus and the buildings of the artist Hundertwasser. Despite Corona, the gillamoos took place there.

The Gillamoos is one of the oldest fairs in Bavaria. Meanwhile it has become hot and we are completely wet sweating. We take a break, eat and fill our drinking bottles for the further journey. 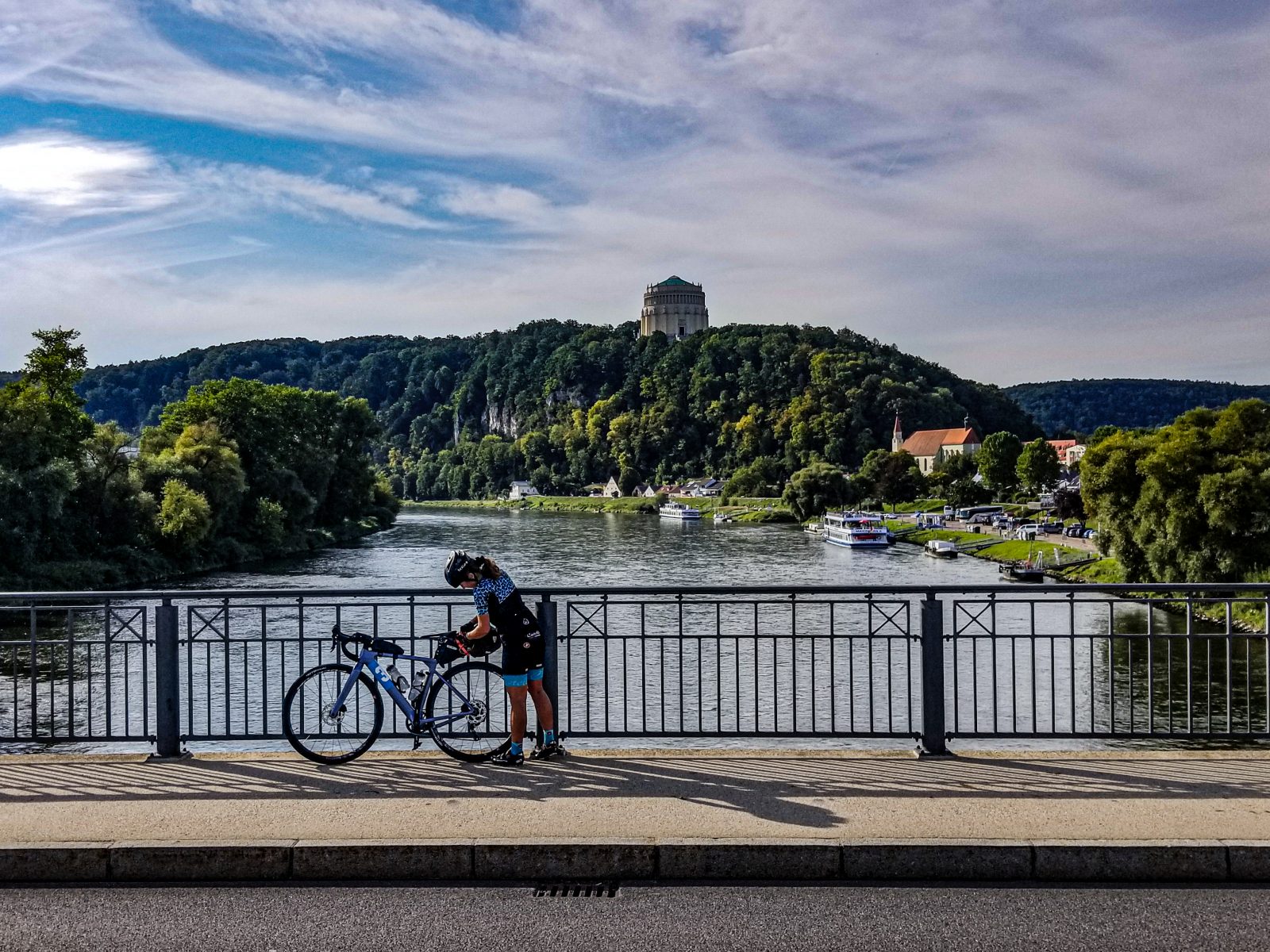 So we finally leave the hop-growing area and reach the Donau valley via fields and meadows. We follow the course of the Donau a few kilometres from the riverbank through woodland and an area dominated by agriculture. Shortly before sunset we reach our first destination west of Regensburg, where we spend the night. 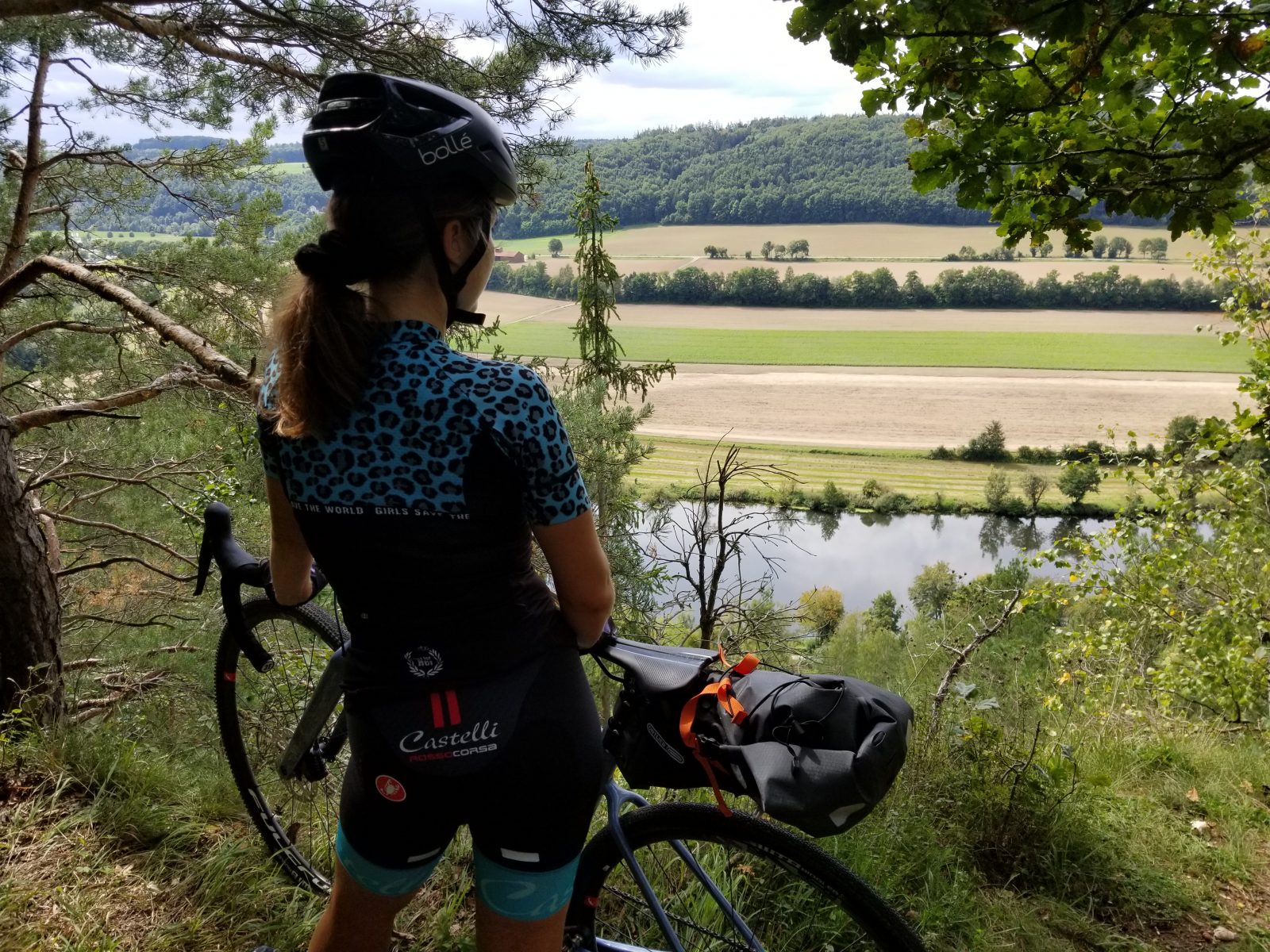 On the second day we start into the foothills of the Bavarian Forest. Along the rivers Naab and Regen there are numerous small castles and palaces from the Middle Ages. Through forest and past lonely farms we partly follow beautiful trails. 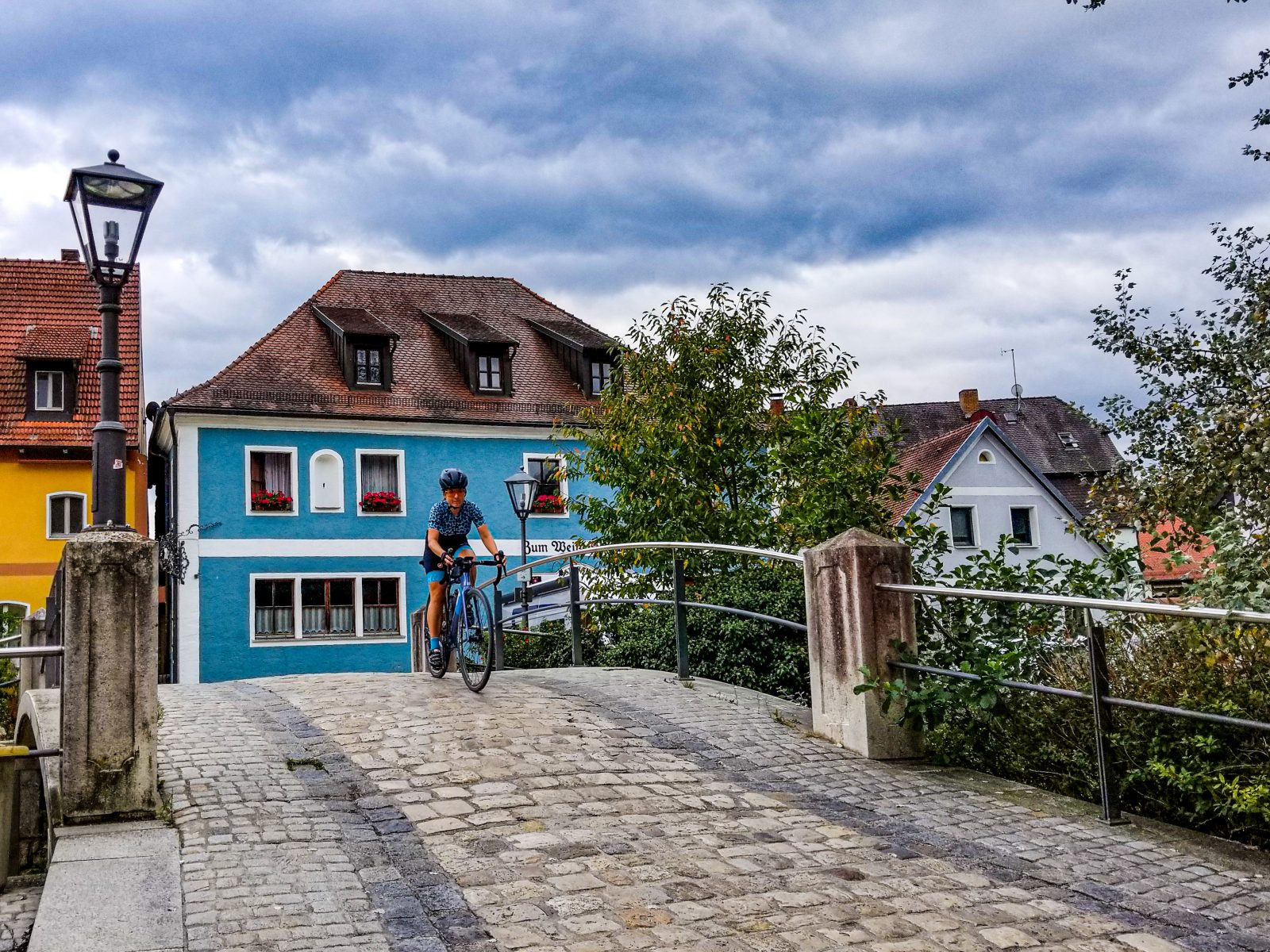 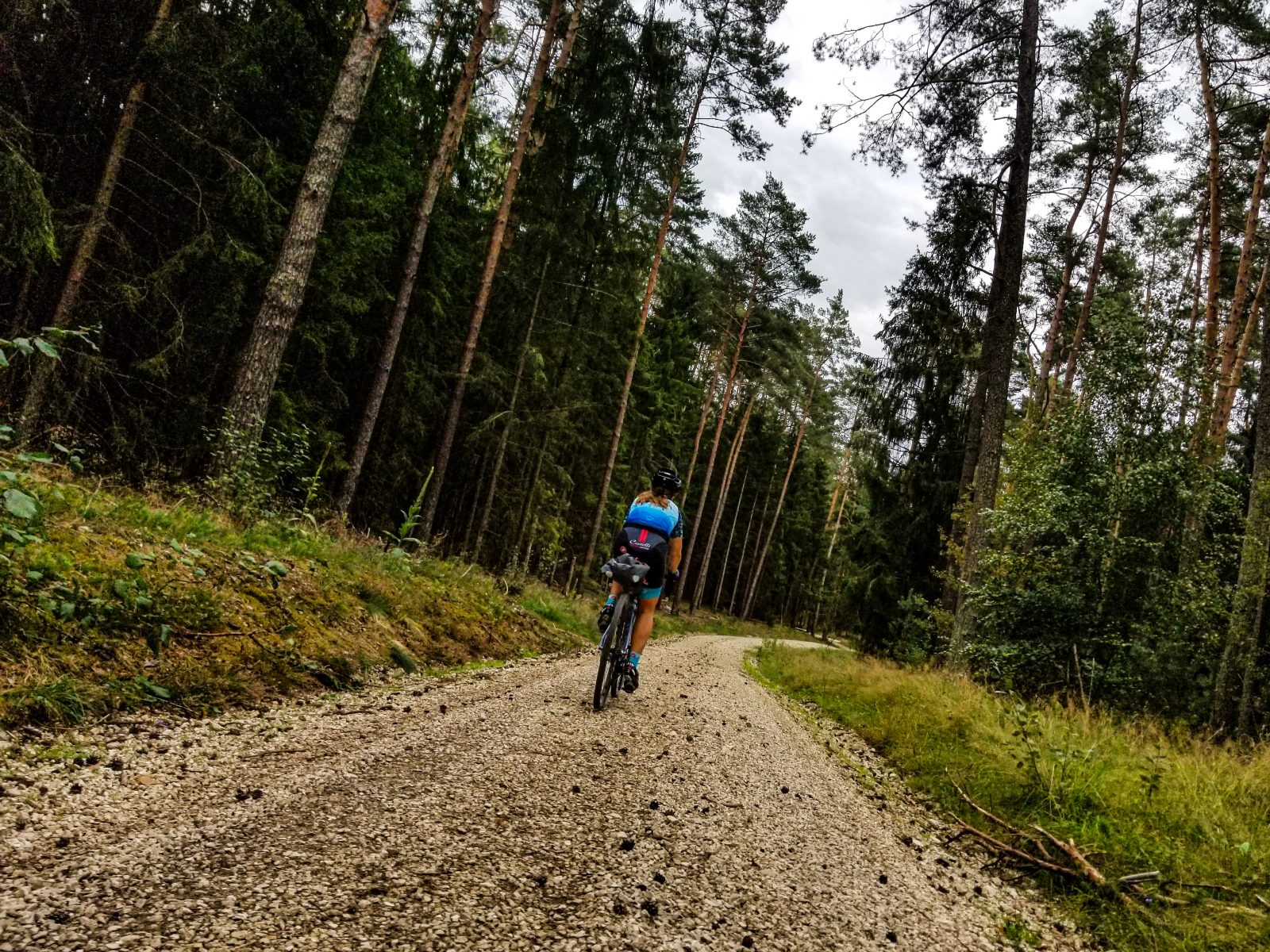 Some of the trails are already completely overgrown or contain steep passages past slopes where we play it safe, descend and push.

Intermediate destination is the Walhalla in the northeast of Regensburg. It towers on the slopes above the Donau valley. The Walhalla is the oldest of the monumental memorial buildings in Germany. It is named after Walhall, the hall of the fallen in Nordic mythology. We enjoy the view over the city and the Donau valley and make our way to Regensburg’s old town. 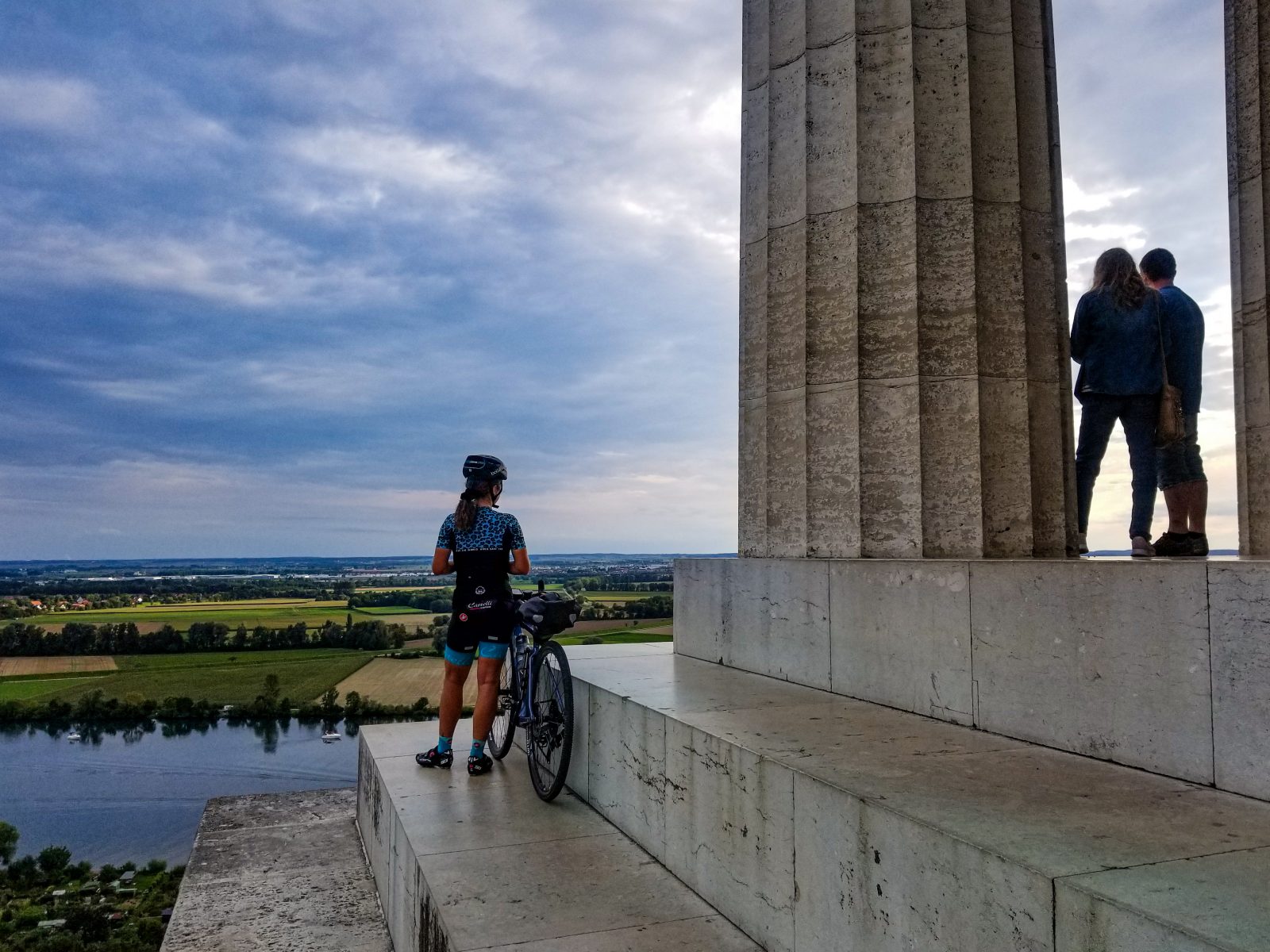 Along the cycle path along the Donau we get directly to the Stone Bridge. Together with the Regensburg Cathedral, a Gothic cathedral, it is Regensburg’s landmark. 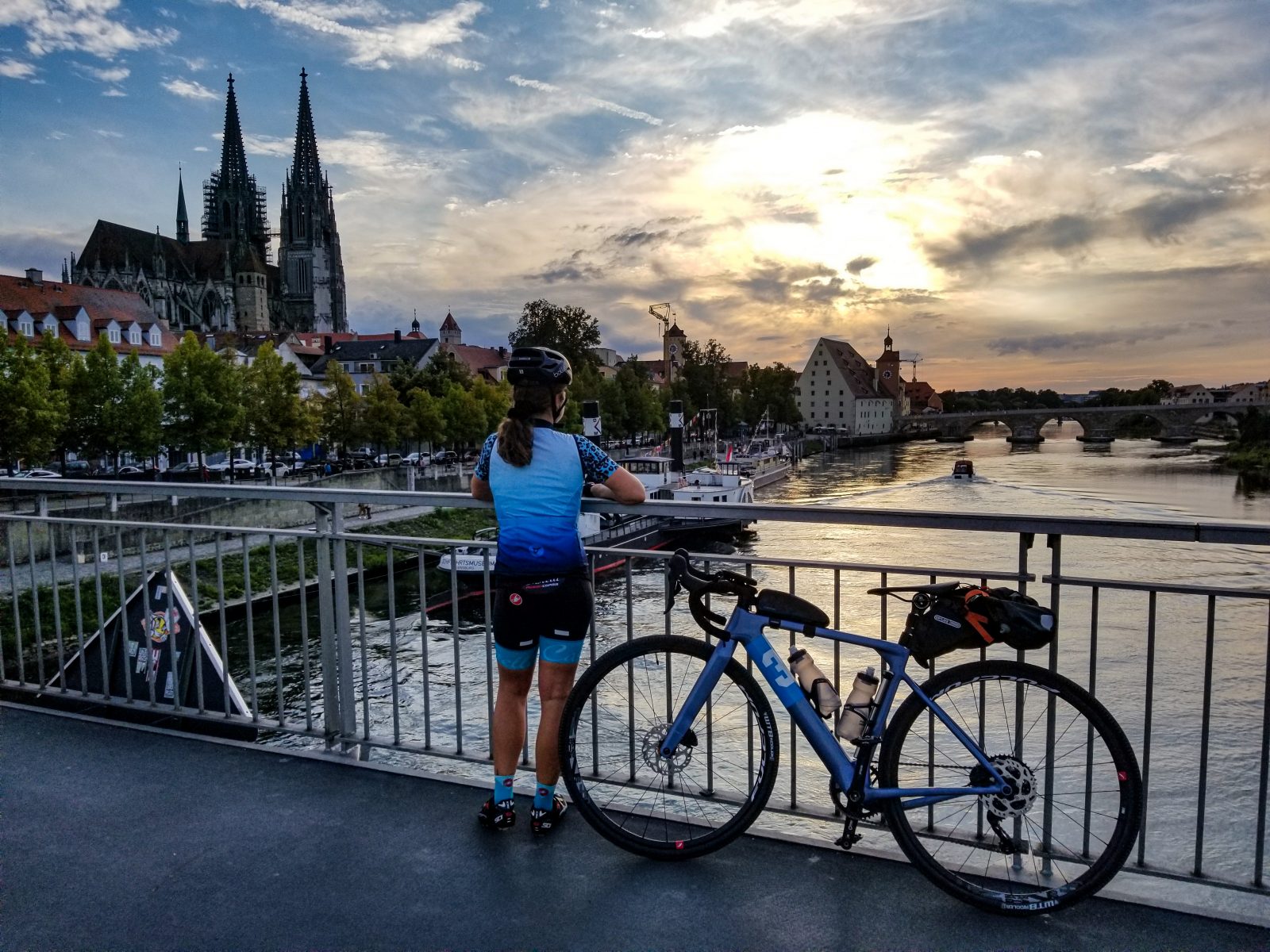 Regensburg’s old town with its small alleys is beautiful and offers countless historical landmarks such as the Porta Praetoria, the more than two thousand year old northern gate of the Roman Empire. We roll through the cobblestone streets of the old town and enjoy the flair. Over the stone bridge we leave the old town. Along the Donau we will visit my parents, where we will finish the second stage. 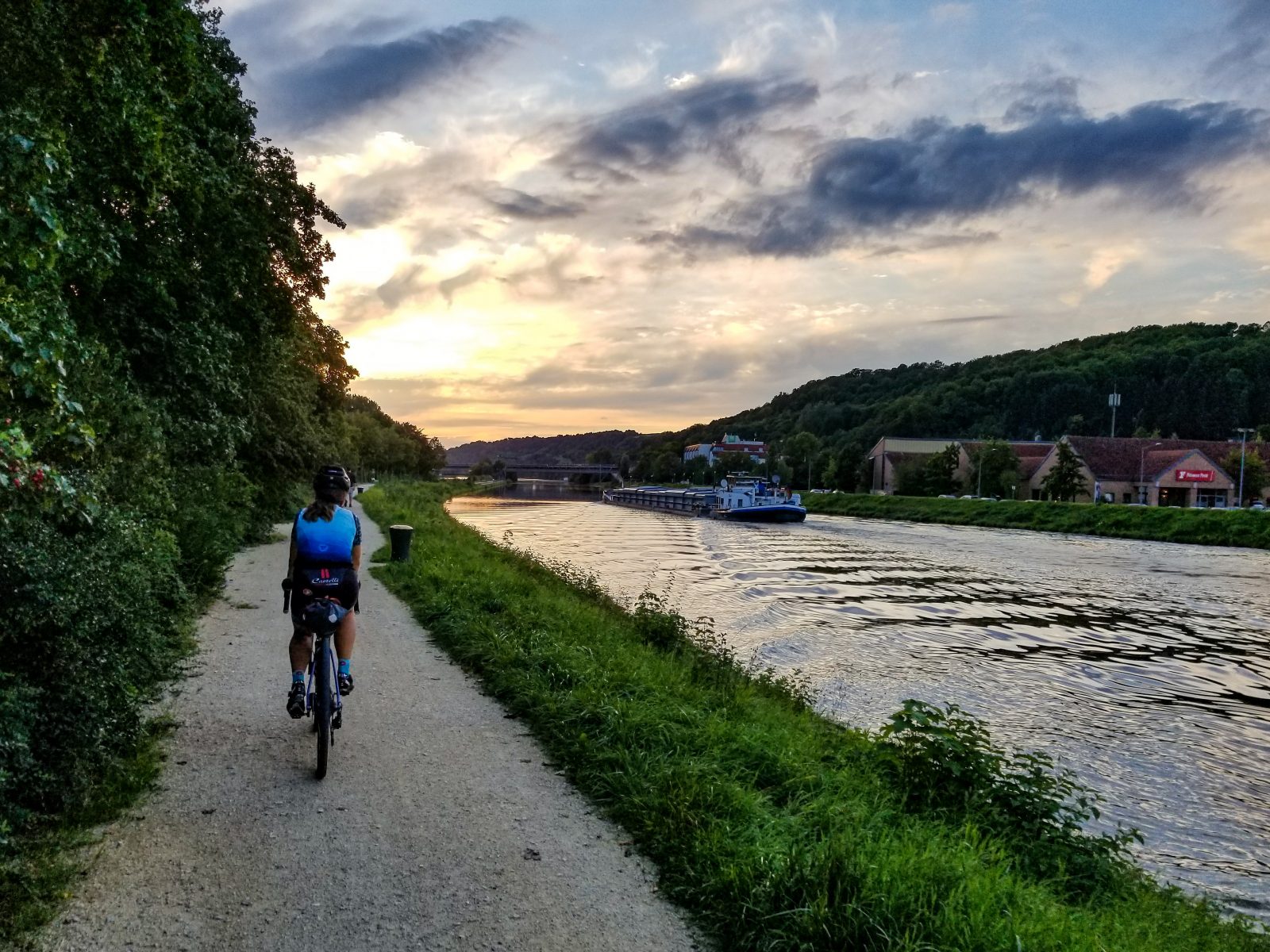 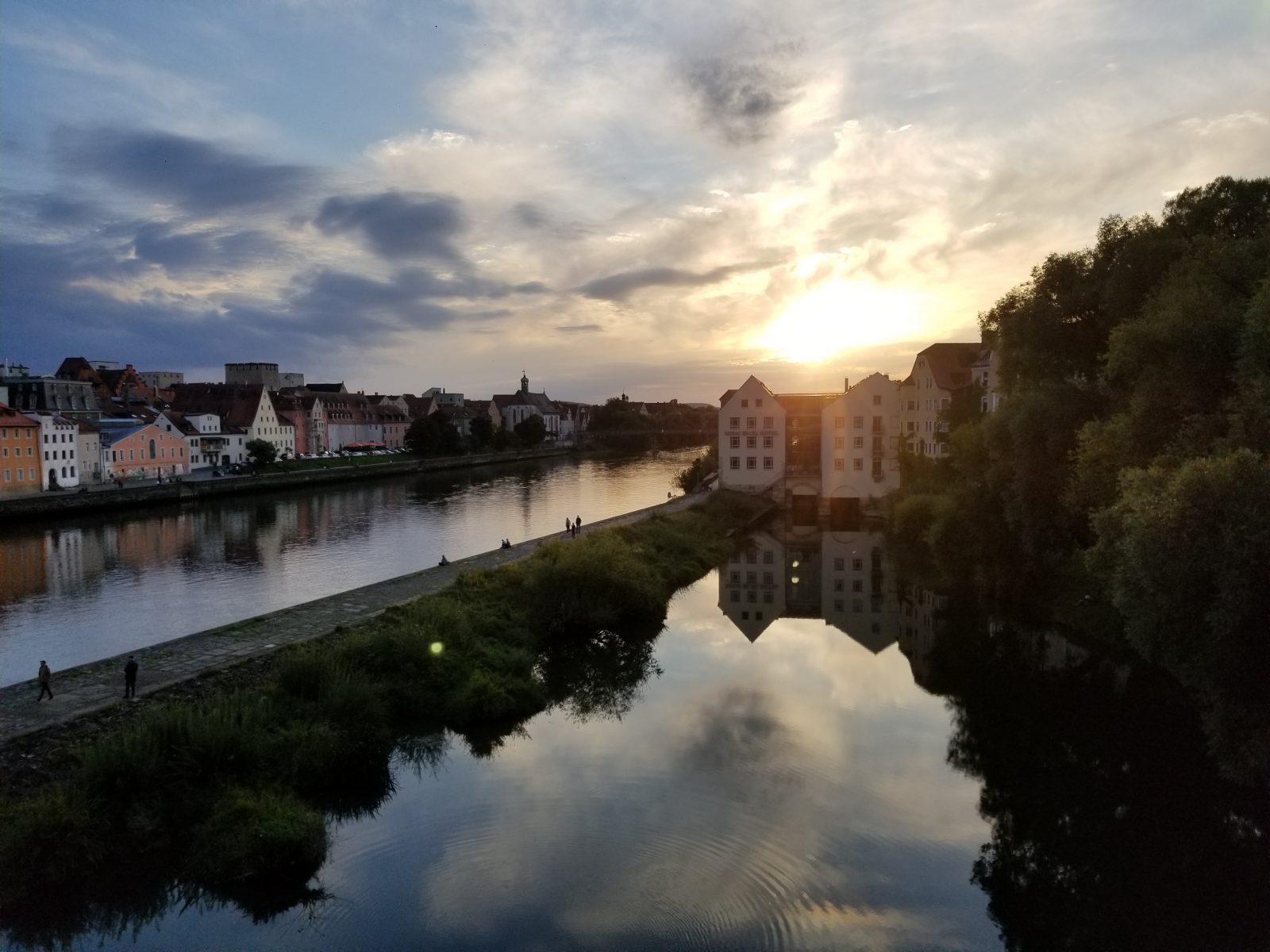 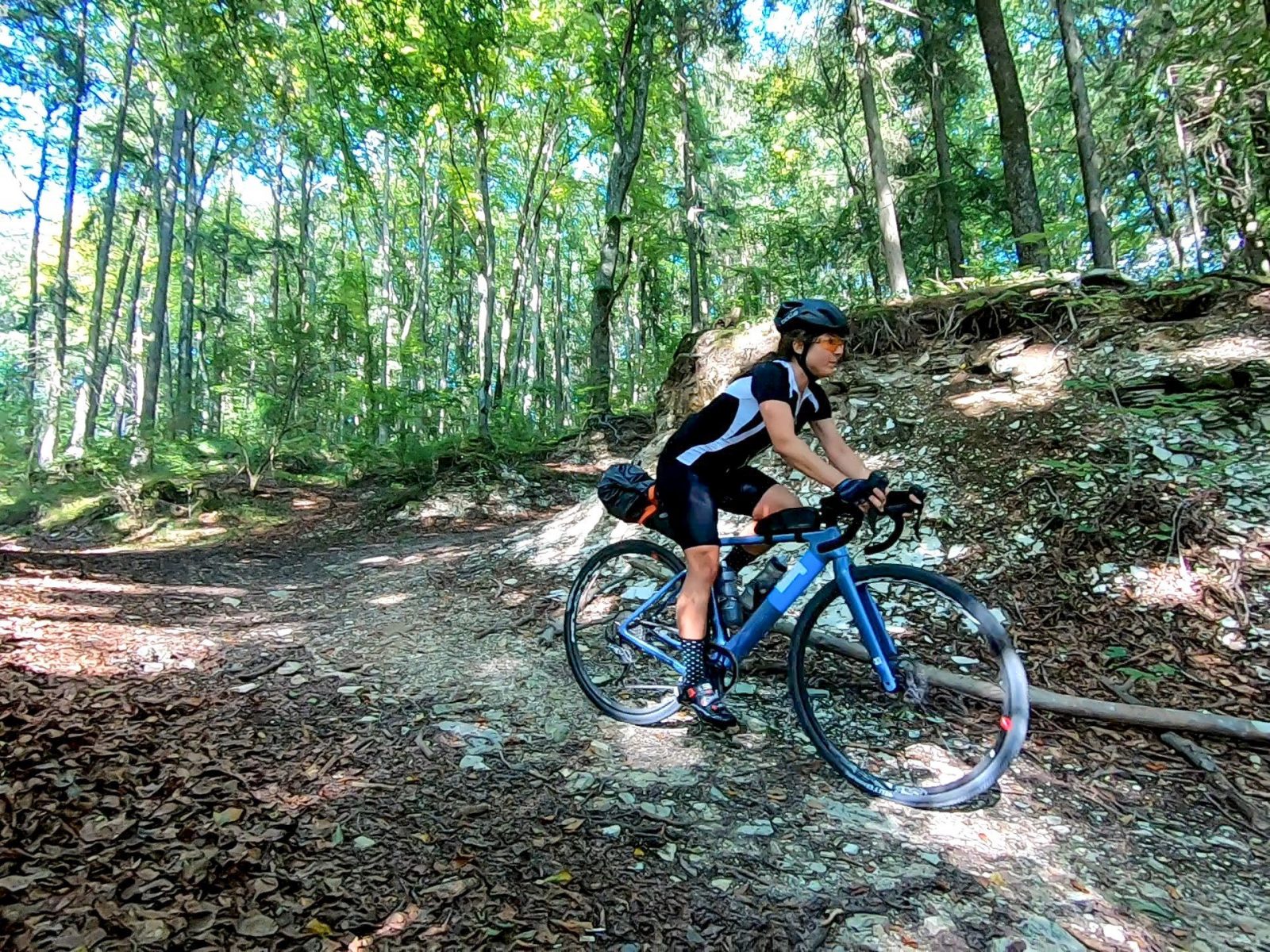 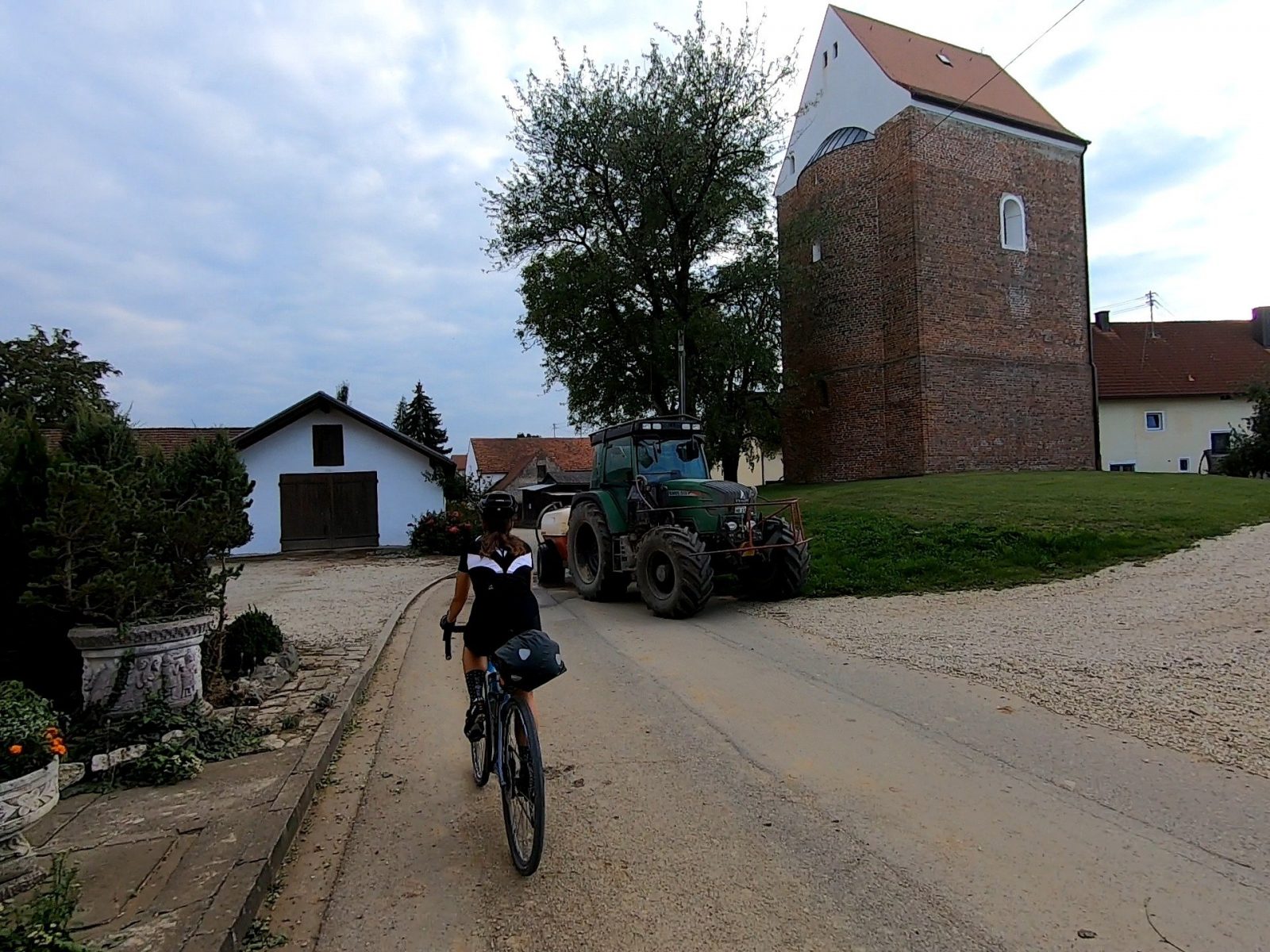 On the third day we leave Regensburg and start the return journey to Freising on lonely dirt roads. We reach the town of Kelheim. 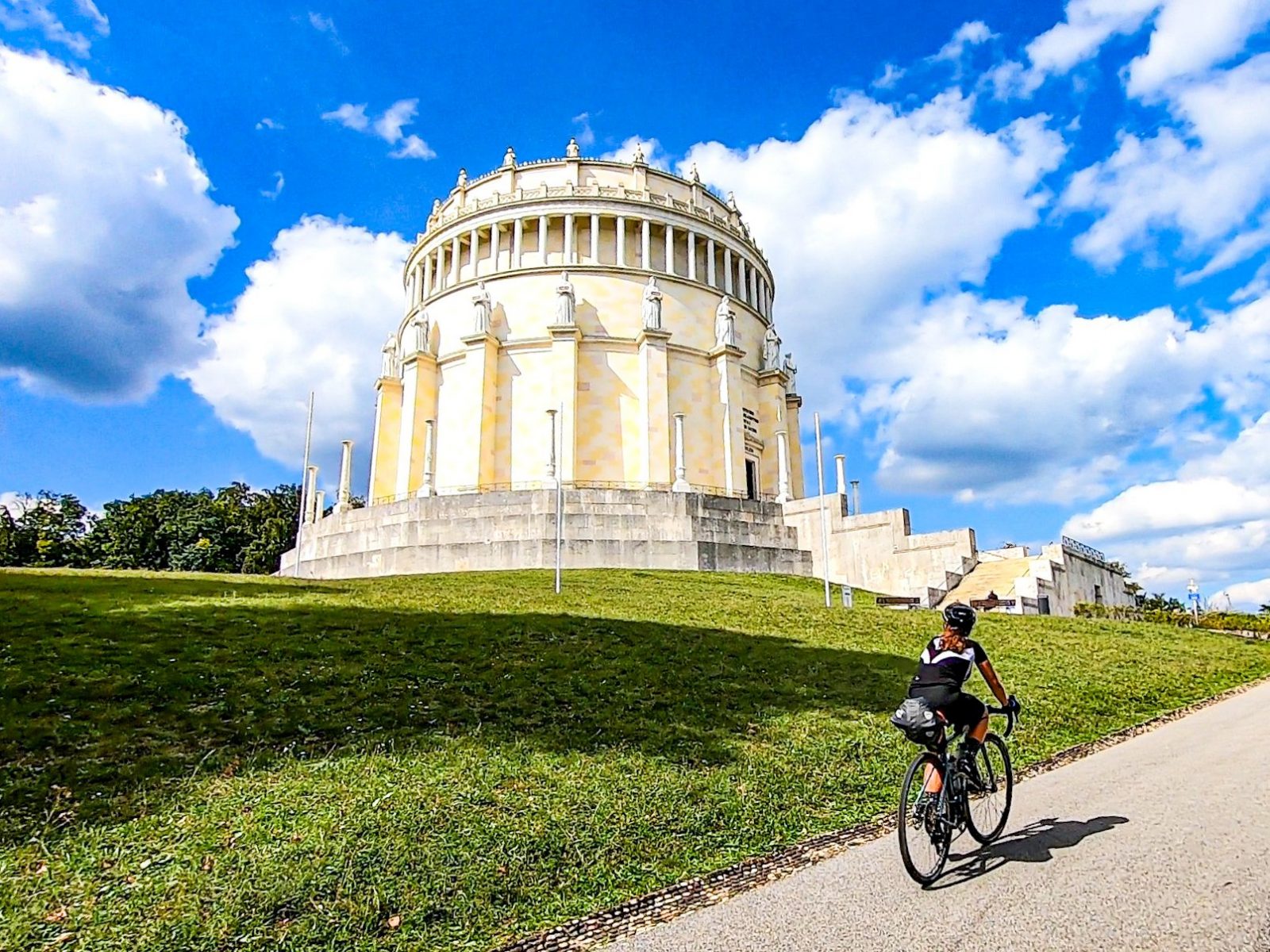 There the Befreiungshalle (Hall of Liberation) is enthroned above the city. It was reached by King Ludwig the First of Bavaria and commemorates the battles won against Napoleon during the wars of liberation. We climb up the hill on a narrow path. There the path leads through the forest down to the Donau breakthrough. 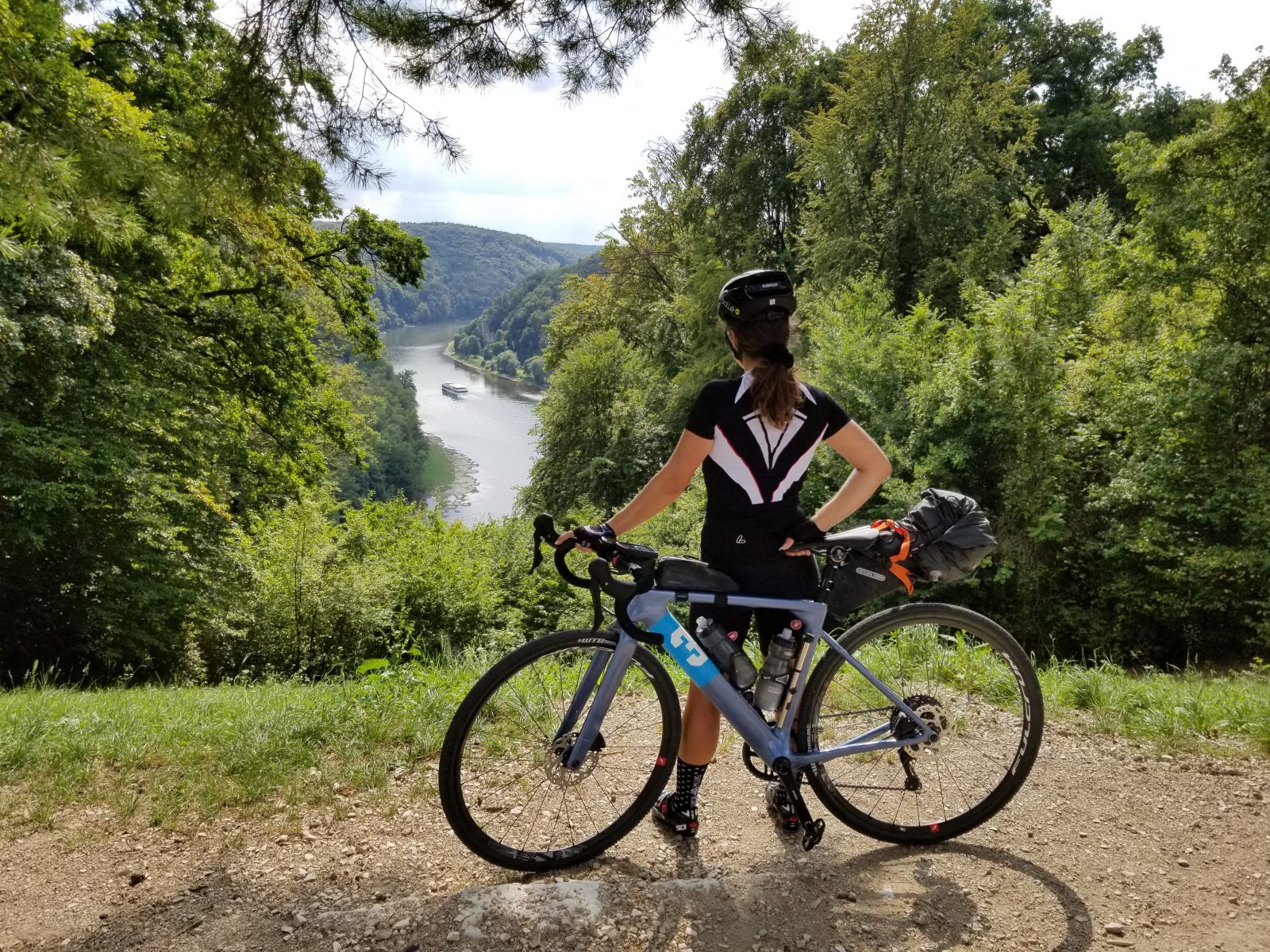 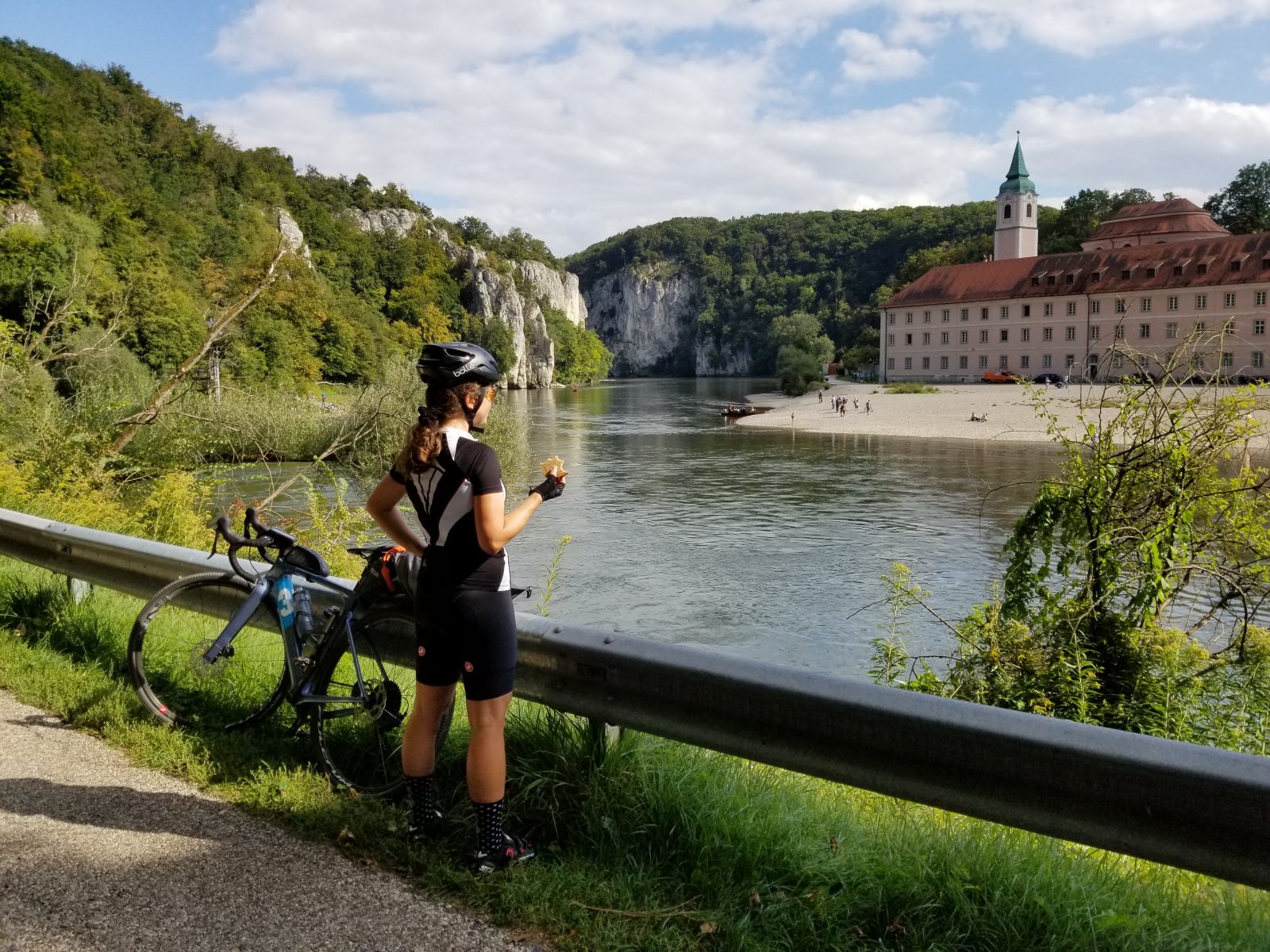 The Donau breakthrough is a nature reserve around the Donau valley, where the Donau passes a narrow passage between two rock faces. There the Klosterweltenburg is located on the riverbank. 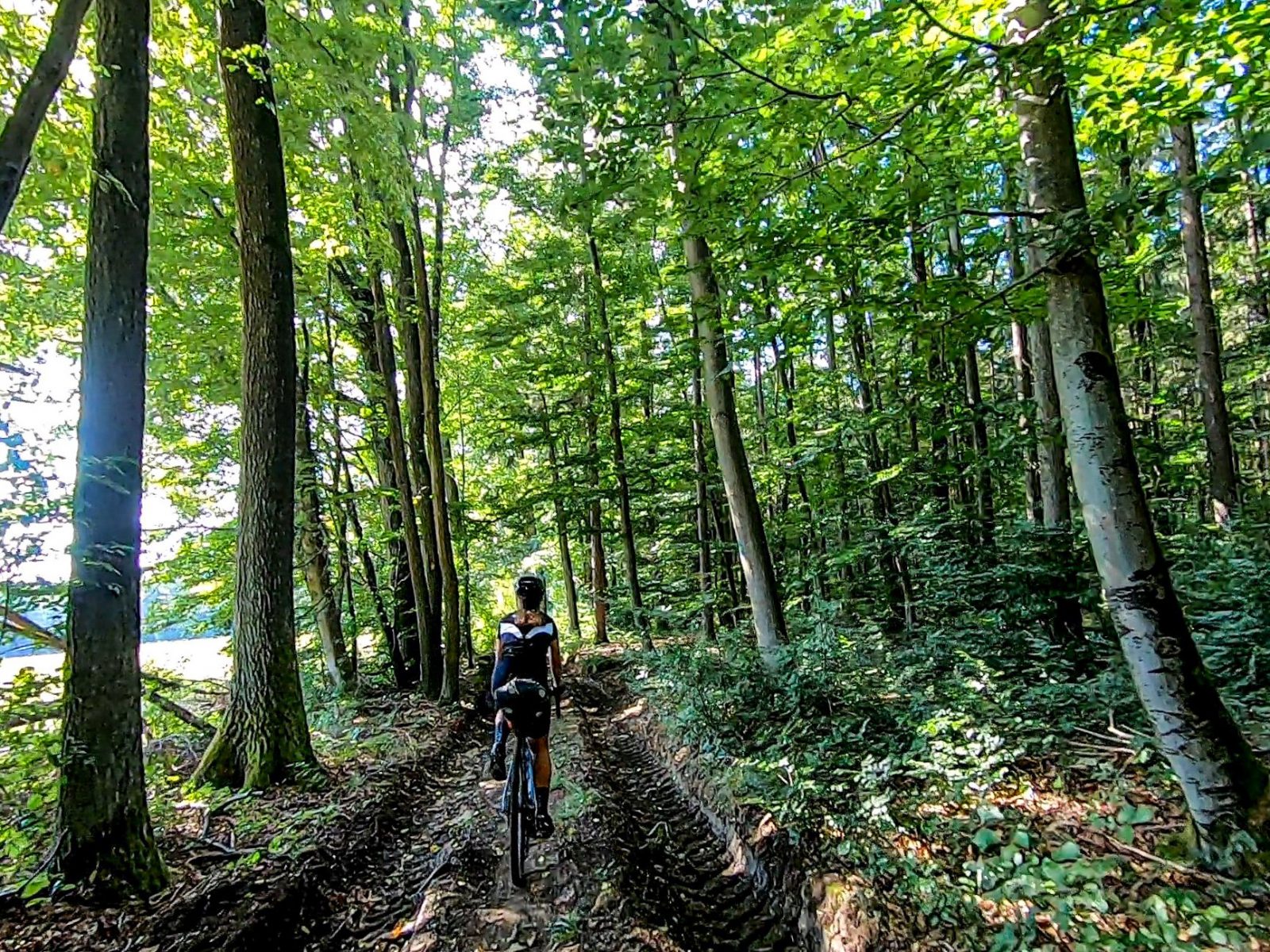 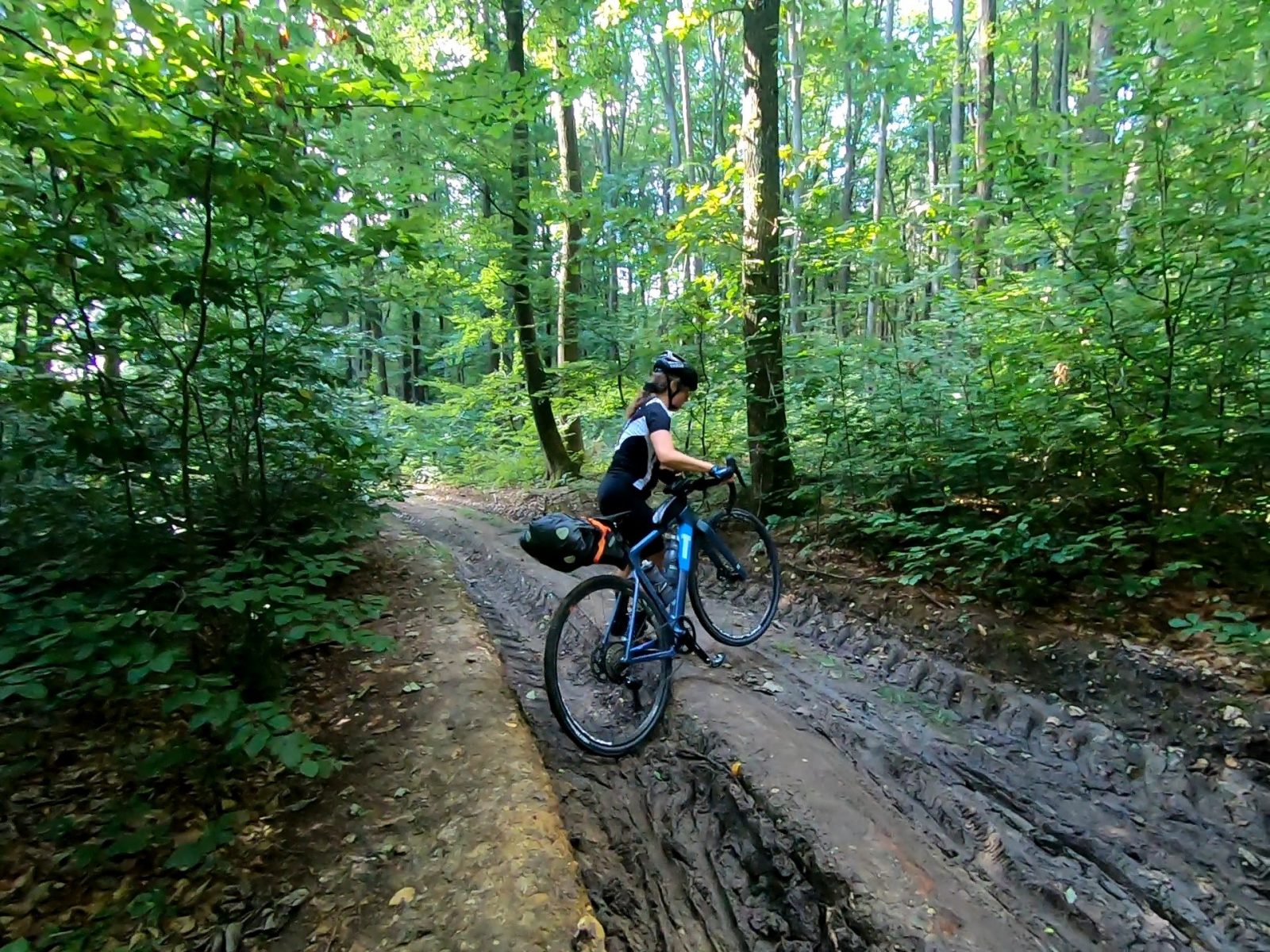 We continue our journey through the nature reserve through woodland on mountain bike trails, some of which we have to dismount and push. 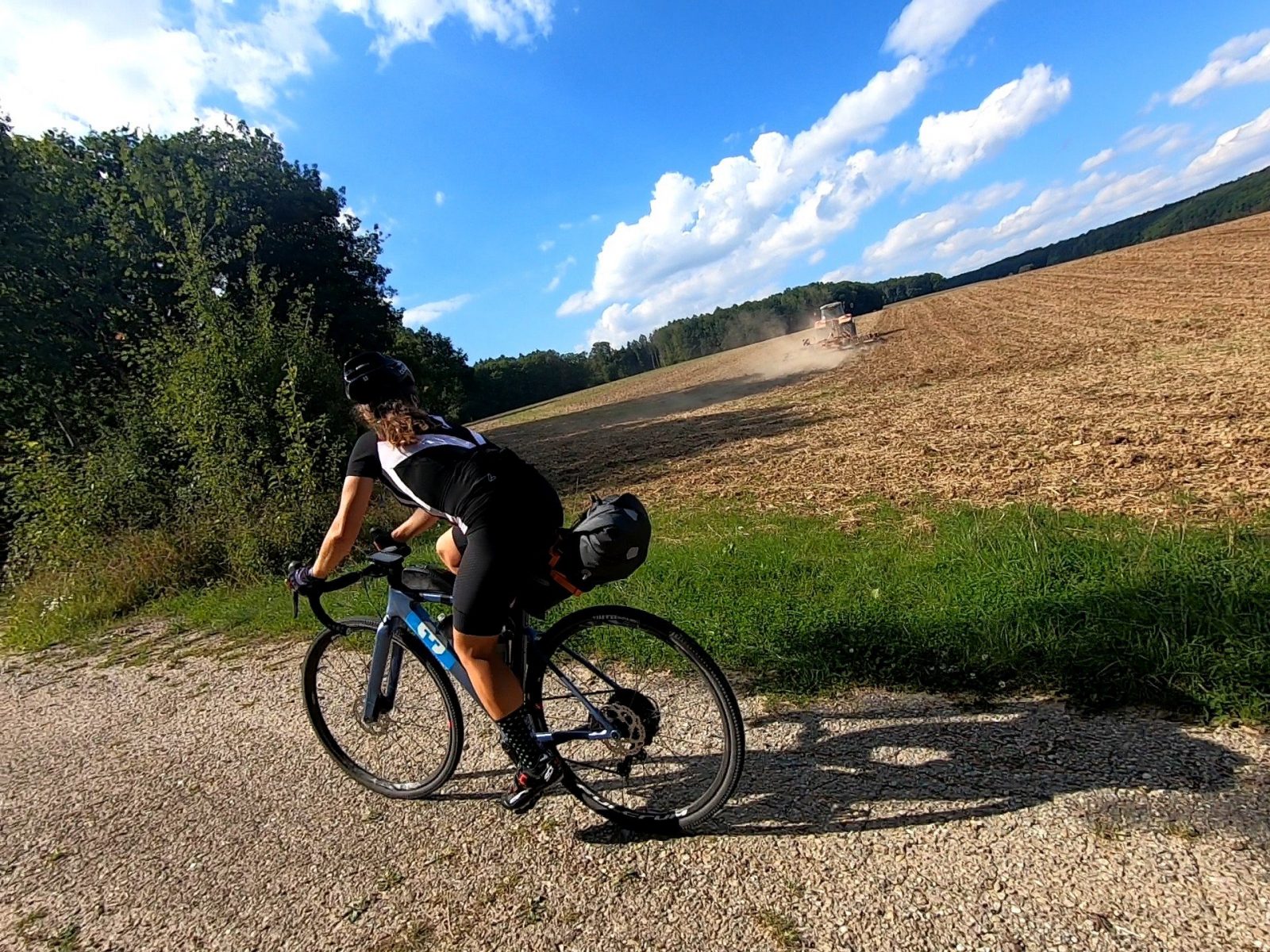 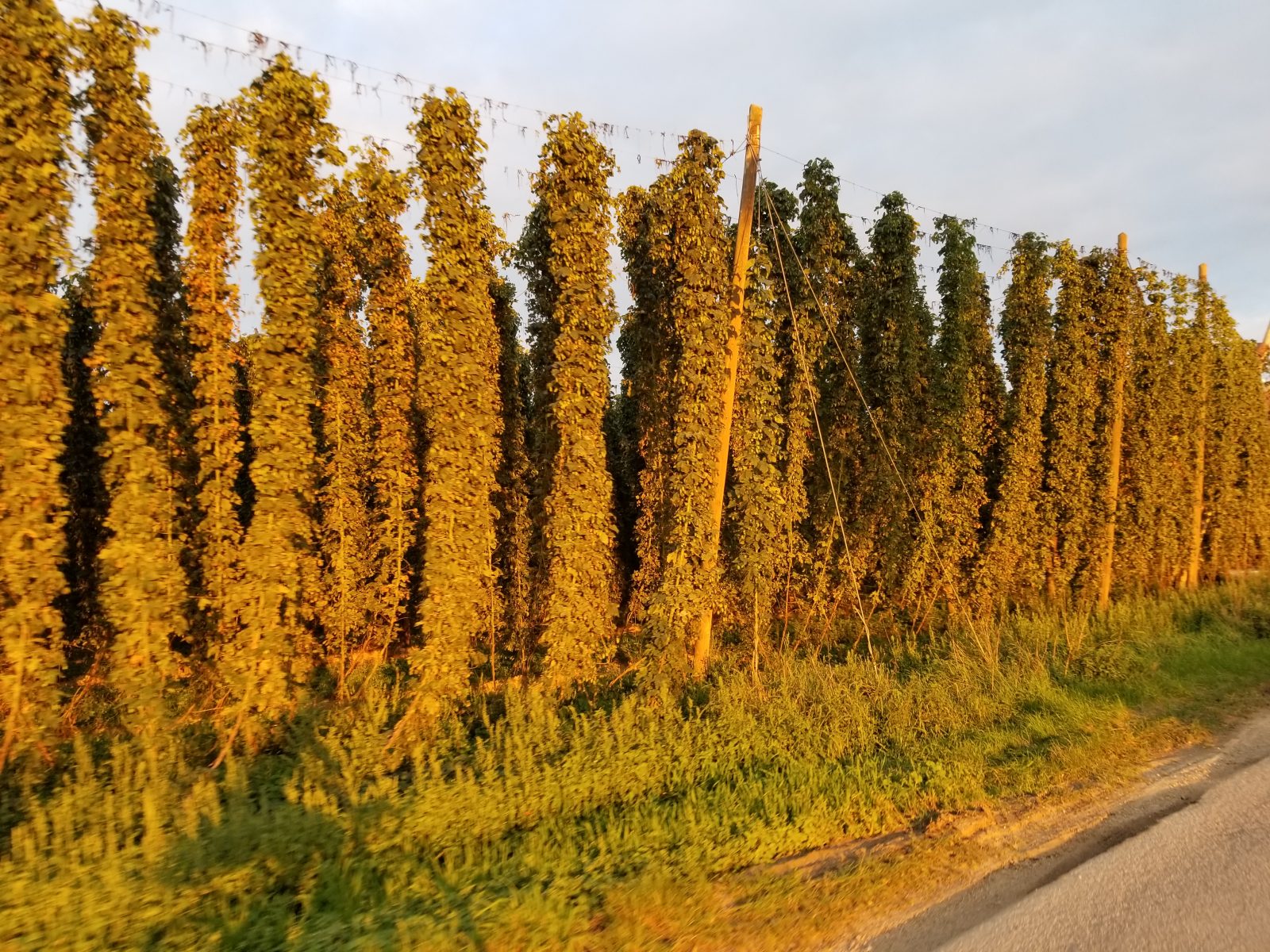 We leave the forest behind us after an hour and reach the foothills of the Hallertau. Now wego back through the hop-growing area. Shortly after sunset we reach the starting point in Freising.

◄ Previous Story Enter to win the Aeroghiaia LTD by signing up for the 3T newsletter
Next Story ► Belgian Waffle Ride – Cedar City: A race ….. finally!
...