When we published the Jeroboam Series calendar at the end of 2019, we had high expectations: six events spread over three continents made a program that really excited us. Unfortunately, since then, many things have happened that have slowed down our plans. Finally, though, the month of August marked the restart of the cycling sport events, or at least the professional ones, and our hope that the first edition of Jeroboam Dolomites could take place was revived. 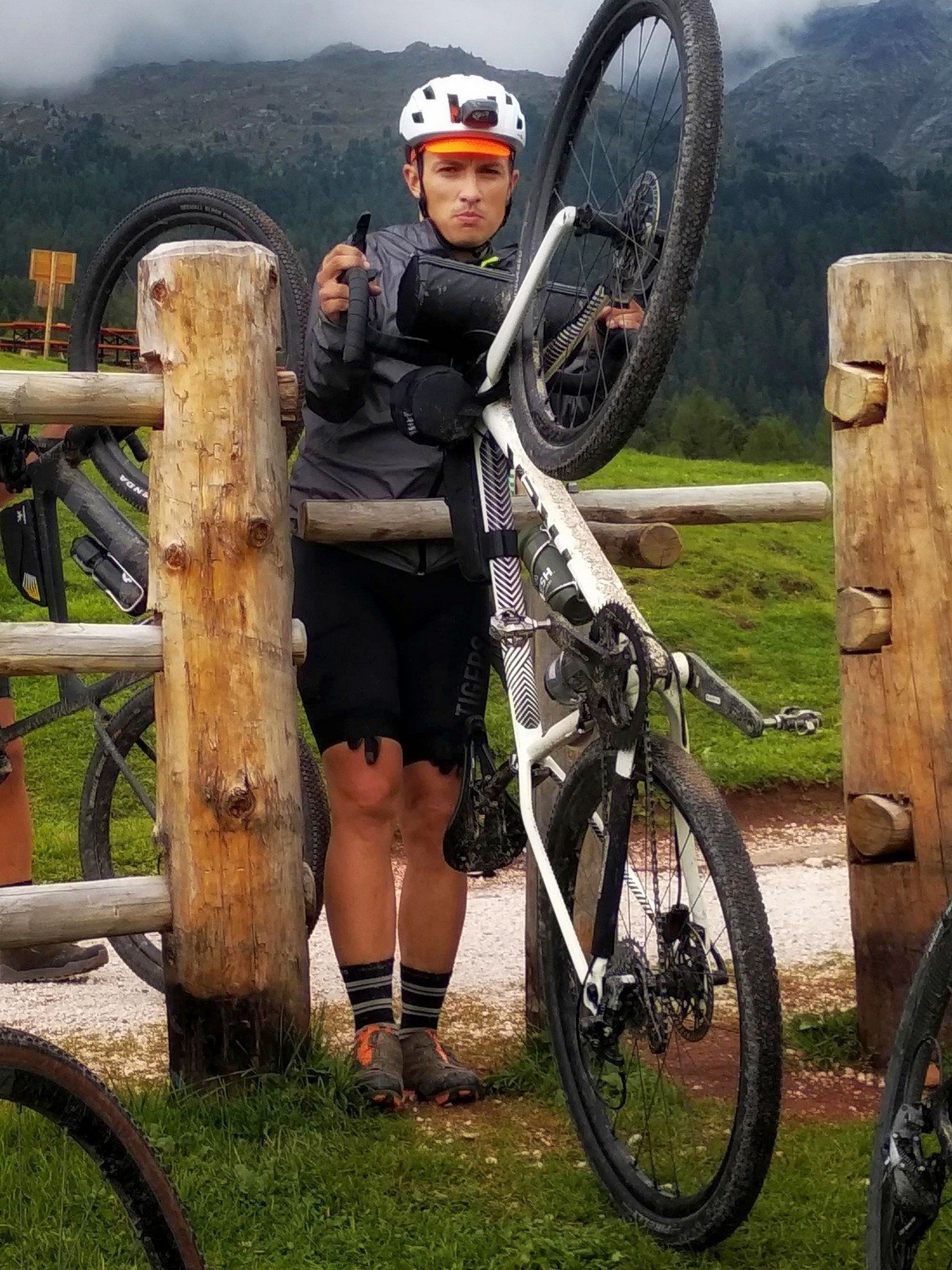 It was less than a month before the set date when Maurizio finally confirmed the news we were waiting for: the first Jeroboam would start on Saturday 28 August. We mentally savored the routine that comes before every event: preparing the demo bikes for the customers, loading the van, setting up the stand… for weeks we were thrilled.

Then we began to look at the weather forecast and the enthusiasm subsided a little: torrential rain was expected for the weekend of 28-30 August all over Northern Italy. The forecasts, in hindsight, were not wrong at all: on Sunday the Adige river, the largest in the region, invaded the nearby Brenner motorway, requiring it to be closed.

In short, if you imagine to think about the whole situation from your comfortable sofa at home, it would have looked like one of those weekends when you say: “I was right to stay here!”. But since we did have to leave that sofa, we can say with utmost certainty that all the 80 participants who decided to come to the village of Varena thought the opposite anyway.

Some of those people chose the 75km course and they were probably the smartest, at least if we consider the fact that Saturday morning was the only dry hours of the weekend (and it was just enough to cover the “Standard” length).

Only one person, Nico Valsesia, managed to complete the Jeroboam route of 300: the only survivor of a group of ten indomitable who were not discouraged by the weather alert issued for Sunday morning. 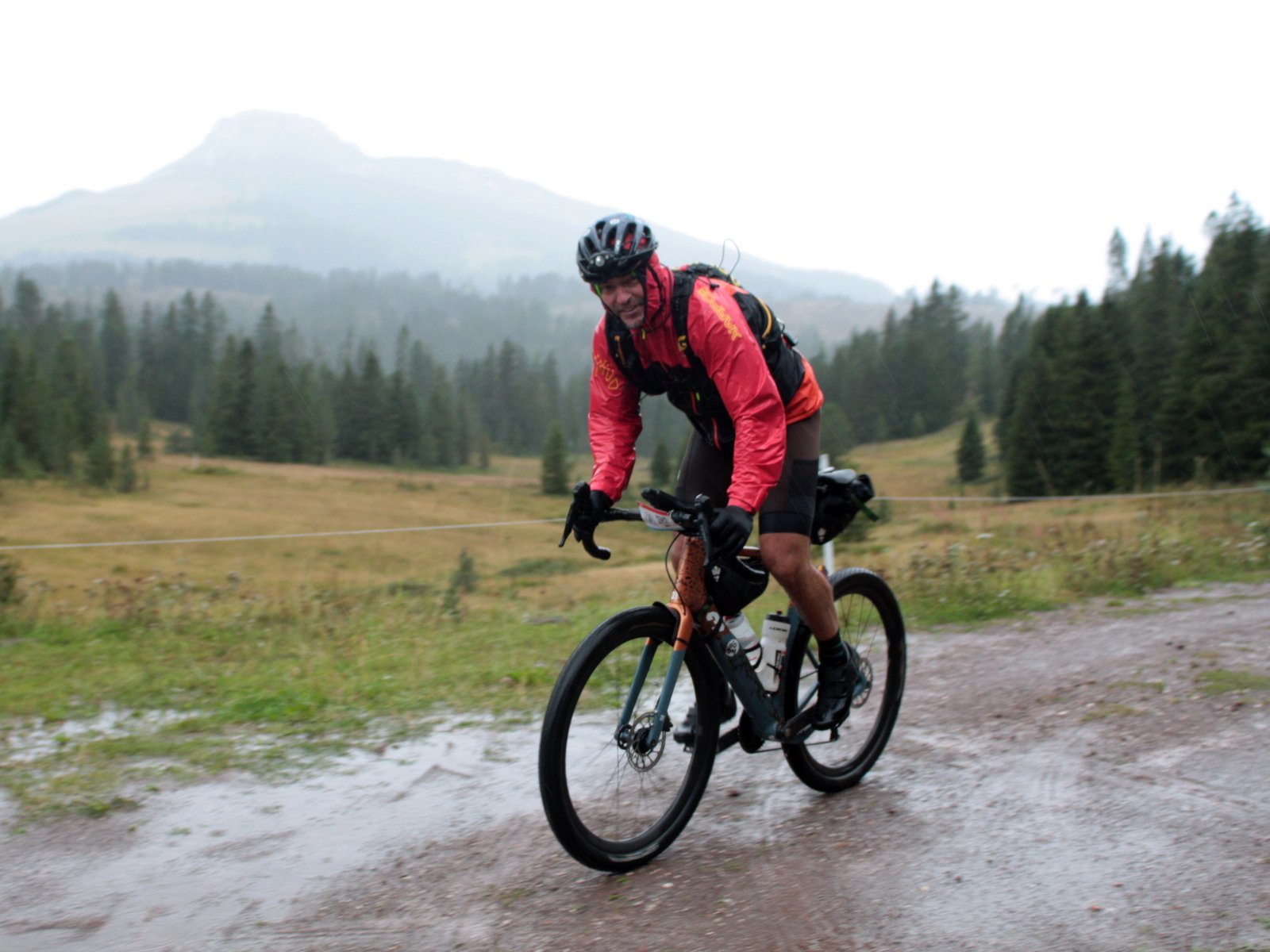 Lastly, most of the other people opted for the intermediate route, 150 km long, or at least they started it, then shortening the second half when the hours under the rain began to be too many.

Even myself has chosen this strategy, already considered early in the morning, when at 8 am all the participants were channeled into the departure area, with one eye on the road and the other to the sky, hoping to take off the rainwear from the bags as late as possible.

After a quick briefing, we all set off together experiencing a feeling we have forgotten: how long had it been since you could take an organized ride? Maybe because of this restart-enthusiasm, everyone tackle the first section in a very brilliant way. Basically, it is all downhill, with only a few ramps here and there, to suggest what would have happened later.

In particular, the boys of the 3T Crew seem unstoppable: Mattia, Federico&Federico, Samuele, Mauro, and Jacopo look like they want to run away from the clouds as long as they aren’t occupying the portion of the sky above our heads. The following hours would confirm that they couldn’t actually escape from the clouds, but that they definetly managed to escape from Davide and I, who quickly remain alone: something that we would not regret during the rest of the ride and that immediately allows us to tackle at our own pace the first 25 km along a beautiful cycle path towards Moena.. 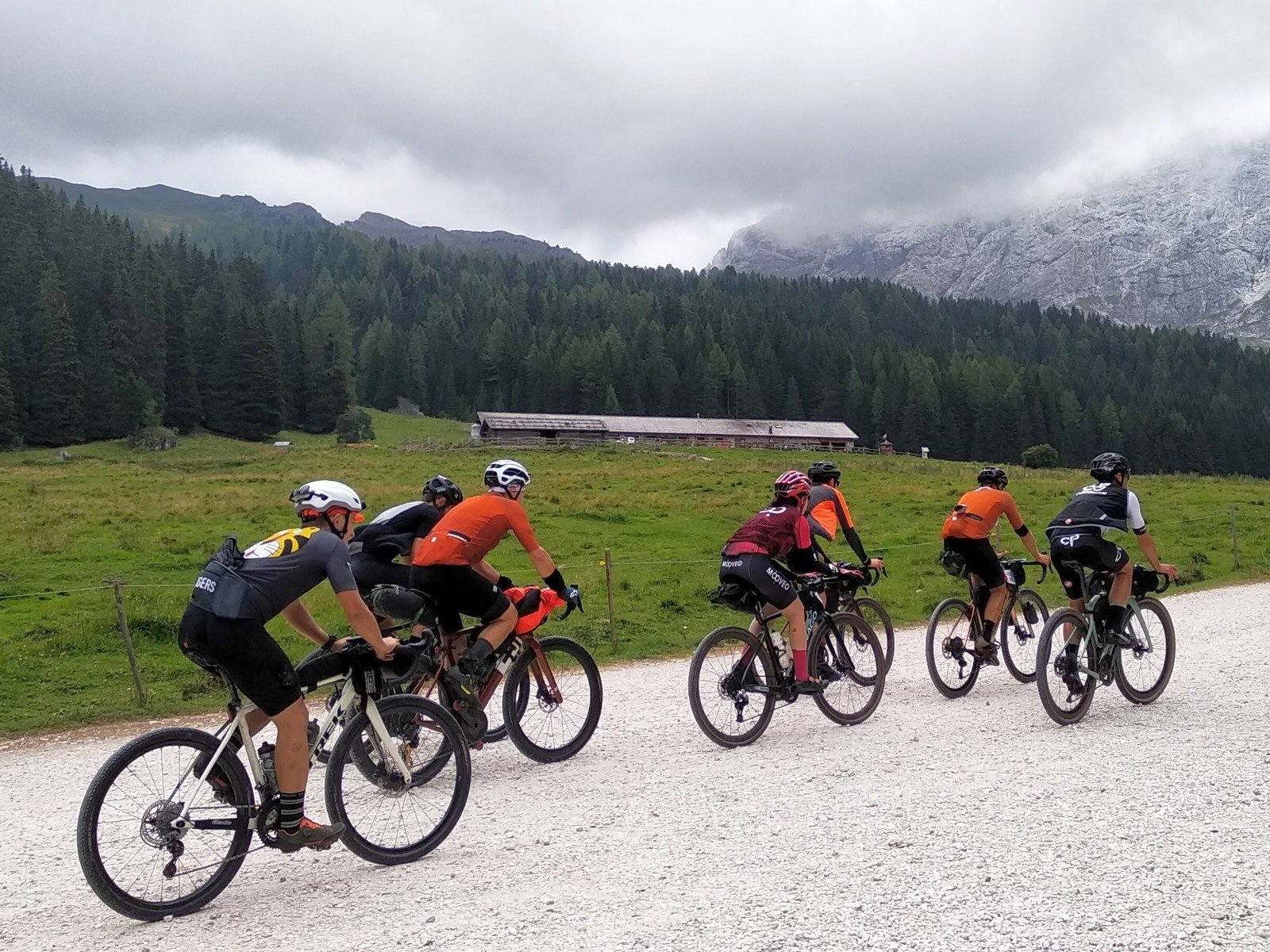 So, when we take the road that leads to the San Pellegrino pass, we are not on the hook yet. We would be shortly after, when the route forces us to abandon the asphalt and drives us to a ramp at first in concrete which then becomes a nice compact gravel. Compact… but steep! It will be like this for about 7 km, with very few moments to catch our breath and the chain always on the 33×36 gear from 1,100 meters above sea level where the climb started to over 2,000 of the Lusia pass. 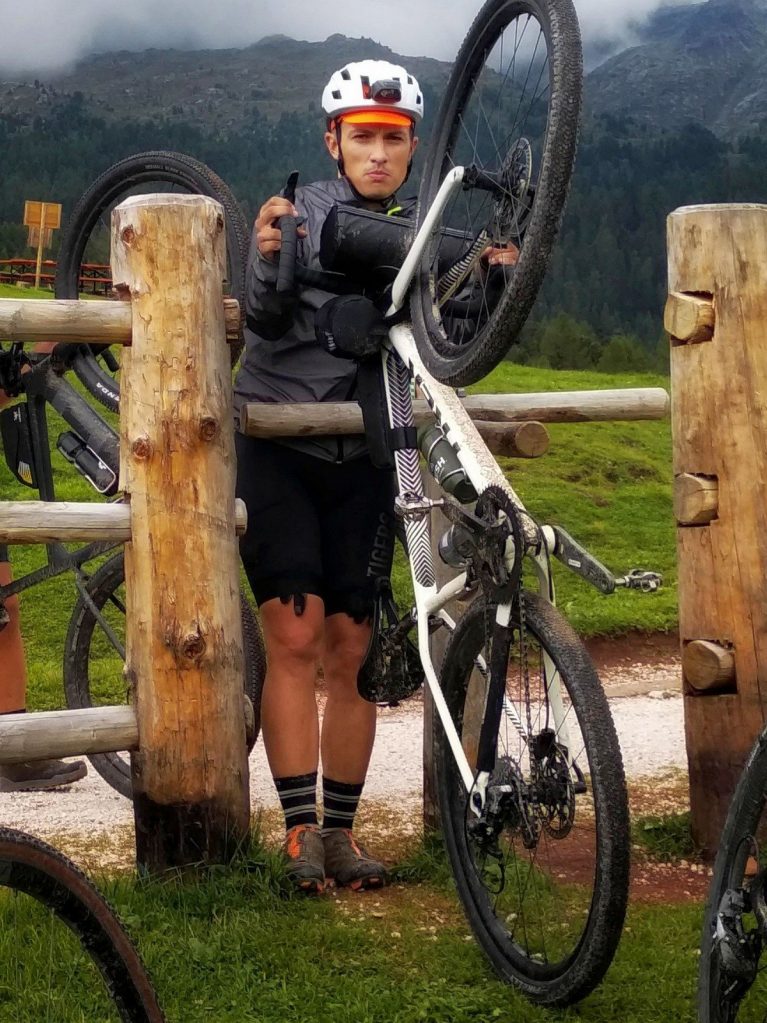 Once at the top, it feels like we have just climbed a monster, but there is no time to breathe: a cold breeze blows and suggests us to immediately resume pedaling and descend to lower altitudes. We are now together with Stefano, who, despite having a much better shape than mine and Davide’s, has decided to wait for us along the first ascent and will do the same on the following descent and on subsequent uphill. 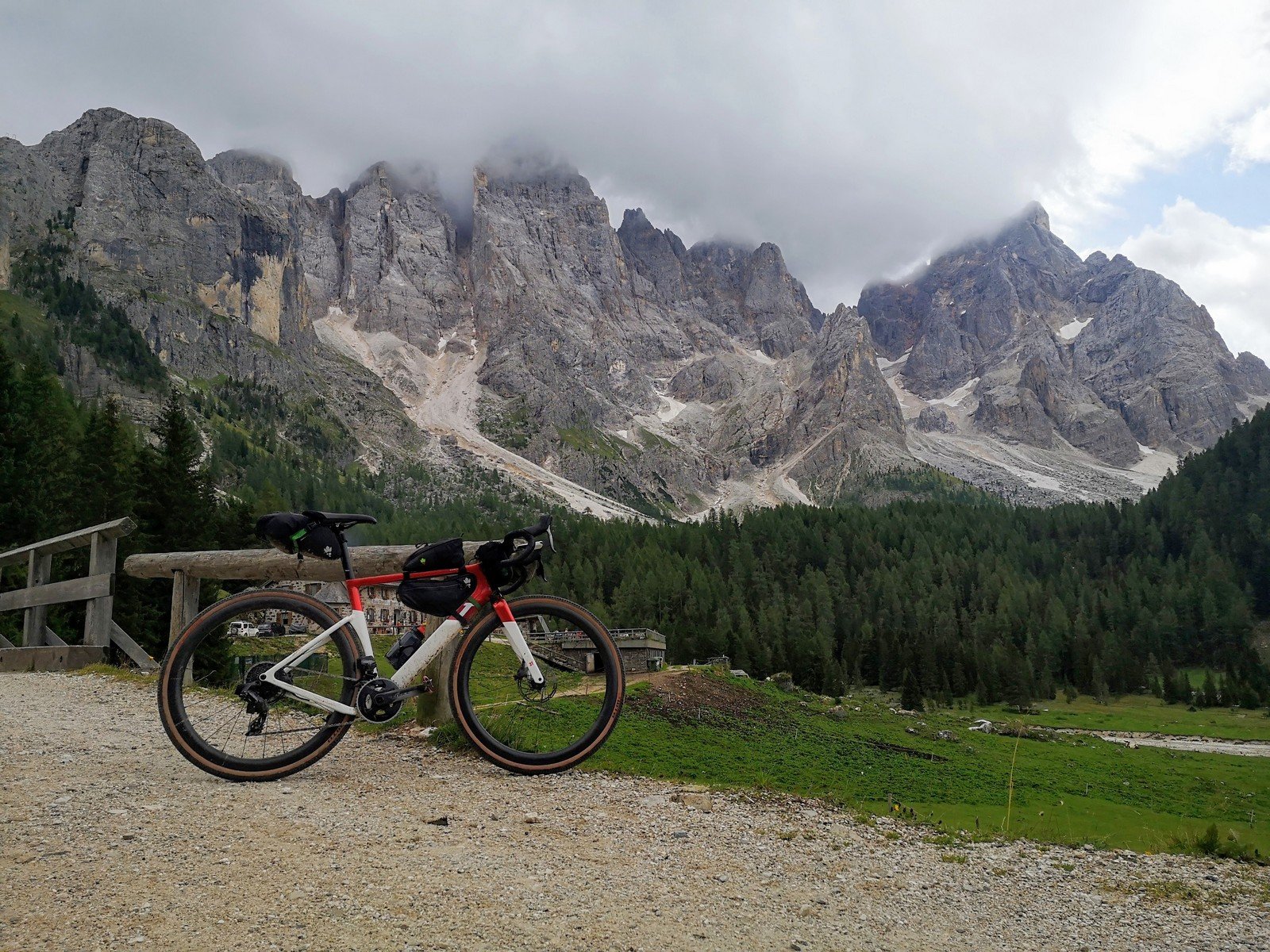 The first one, once we have reached the Venegia Valley, takes us to the 2,200 meters of Baita Segantini just in front of the iconic “Pale di San Martino”. The climb is progressively more grim: if in the first section we can allow ourselves to be amazed by the scenic beauty of the context, as we climb the air becomes colder, making the refuge and its warmth a true oasis of salvation from the weather. 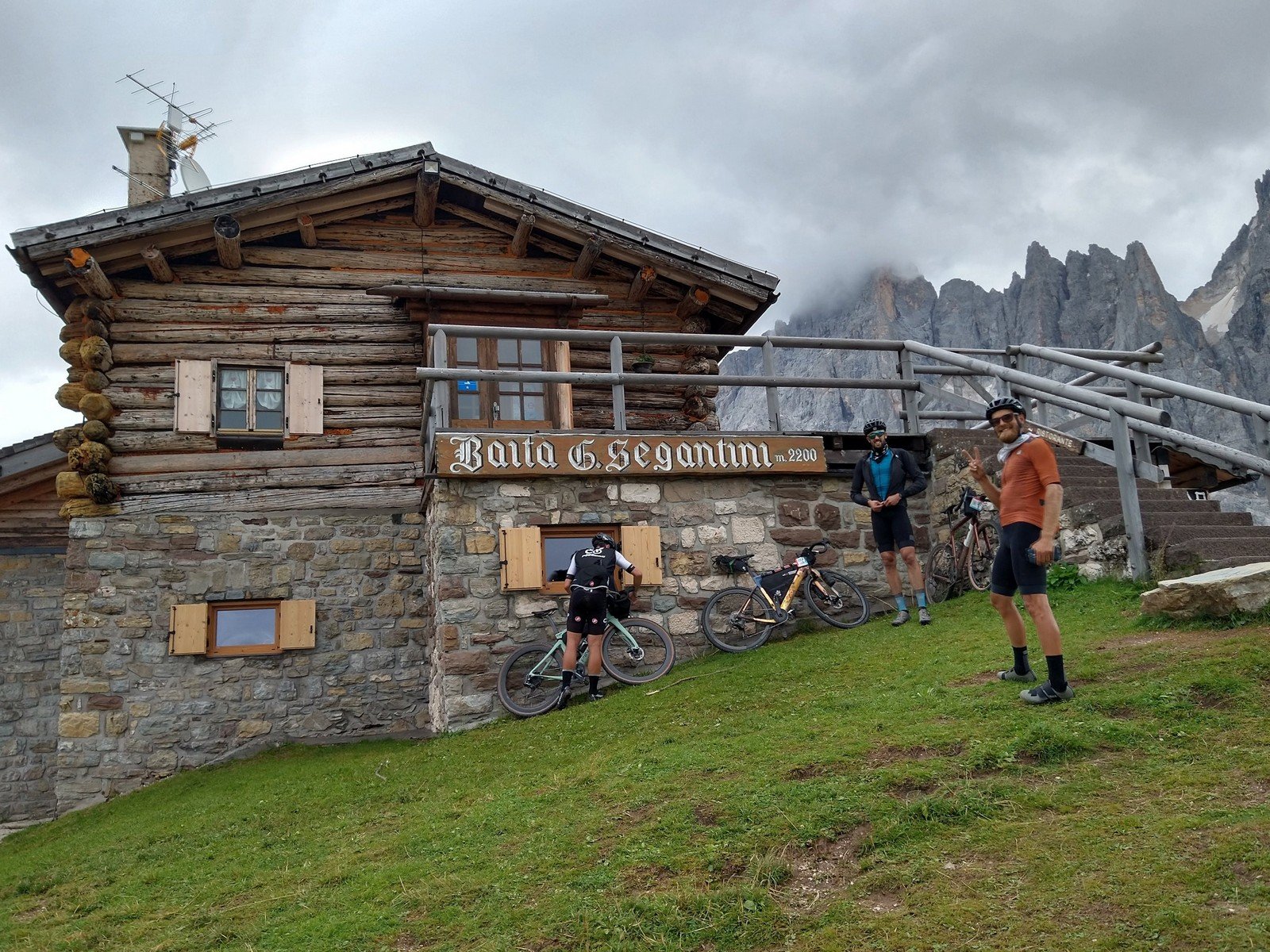 It will become even more so when, as we bite our sandwich filled with speck and local cheese, the much feared rain starts. It immediately falls big and thick and the desire to go outside the walls that protect us is at a minimum. We console ourselves by thinking that we have at least the privilege of being able to wear some dry clothes. 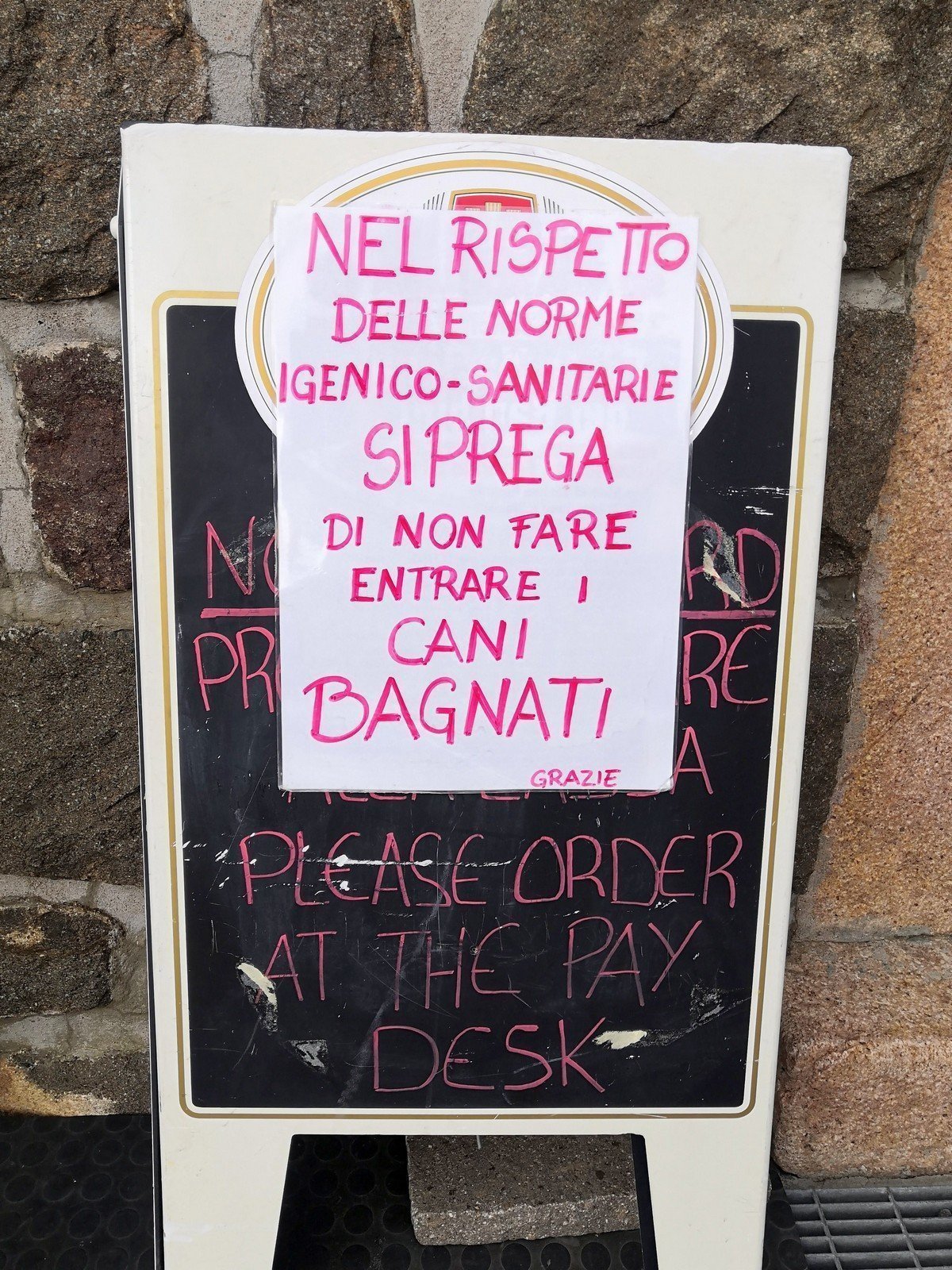 So, once that the courage to leave the Segantini hut behind us has been found somewhere, we begin the descent in a surreal scenery given by the fog and very poor visibility. Fortunately, as we go down the fog lifts and the rain stops, so much so that we can take advantage of the obligatory stop to allow the passage of a large flock of sheep by removing the raincoats. 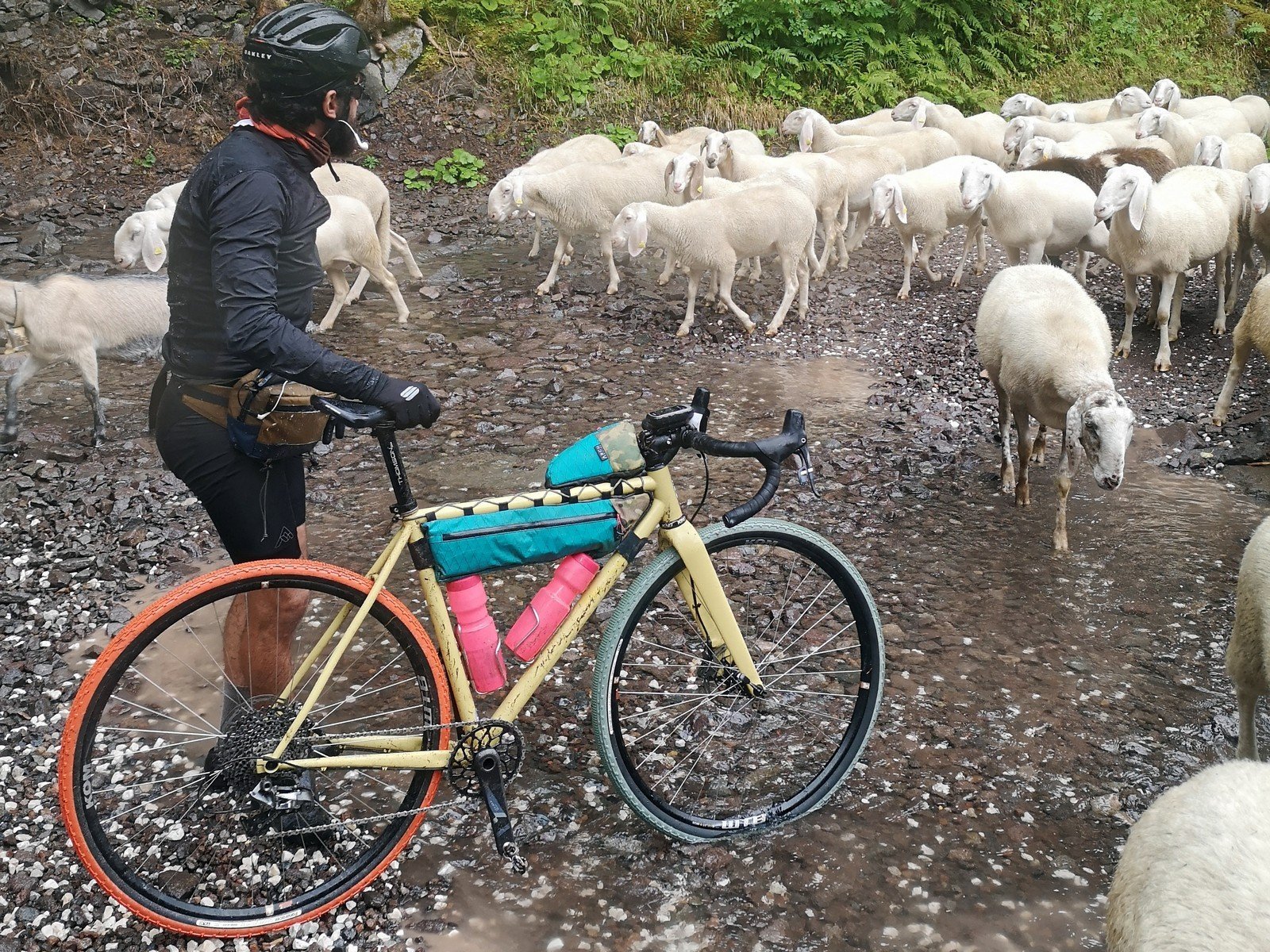 In the meantime, Giovanni joins us. With his steel bike, narrow wheels, a rear rack with a side bag only on one side and, above all, a jersey showing Tyrolean graphics, he does not exactly correspond to the prototype of the gravel cyclists you could see on the magazines, nevertheless he really pushes hard on his pedals. We are therefore a group of four elements when we can finally see the Paneveggio lake, surrounded by reddish stones that enhances the color of the water. 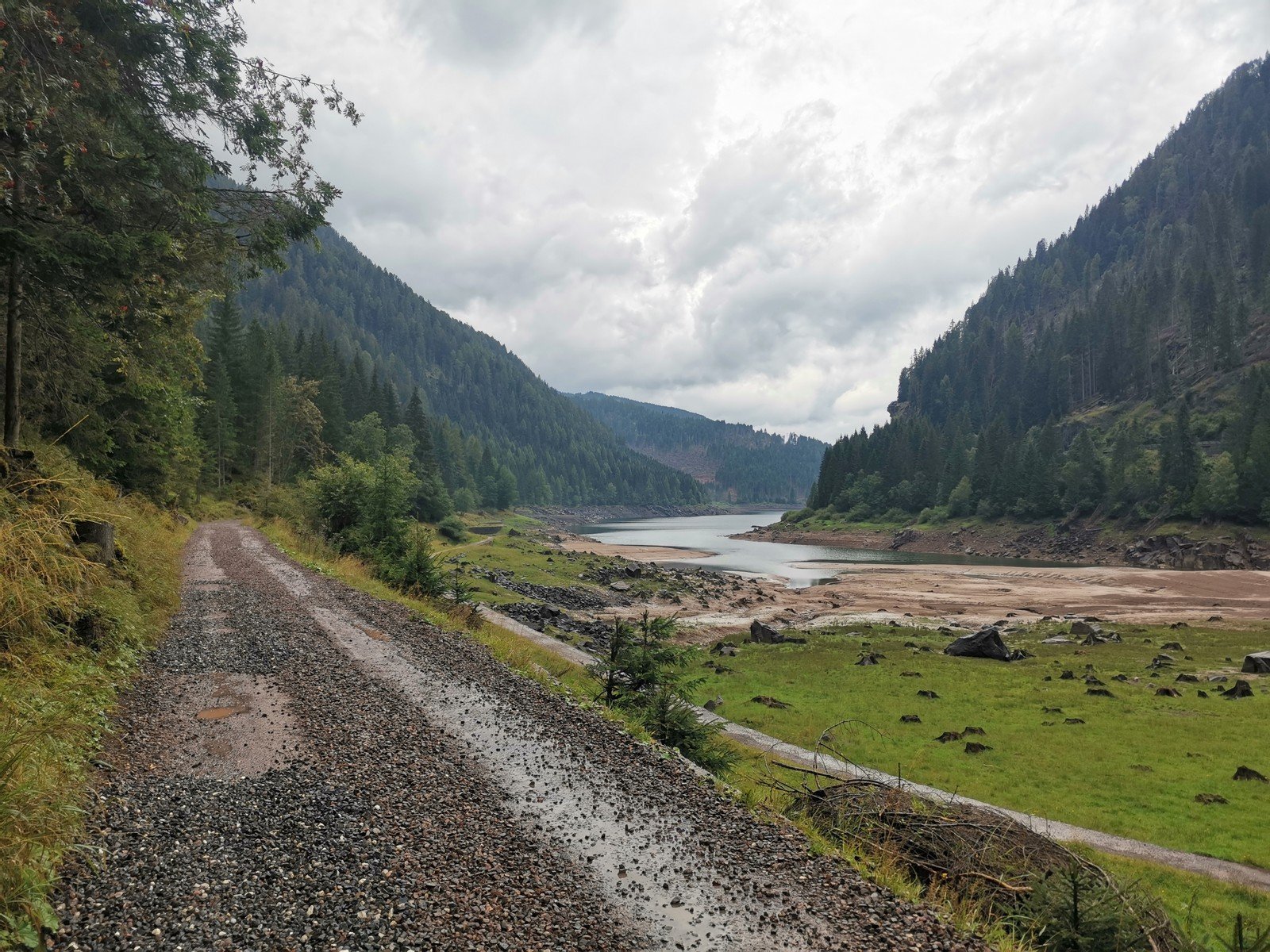 We are now almost at the end of a 20 km long descent that took us back to the bottom of the Fiemme valley from the Segantini hut: Cavalese is the key spot where we will have to decide whether to try to close the 150 km route or to go up towards Varena by cutting the second part of it. The rain that has been falling for several hours now and the weather forecasts that do not announce any improvement have deleted the doubts of almost all of us: Stefano is the only one still determined to try to complete the full distance.

We leave him in the company of a French cyclist that we helped to repair a puncture: we will see them both again only several hours later, arriving in the darkness at the village, when we had already enjoyed a hot shower and a lavish dinner. 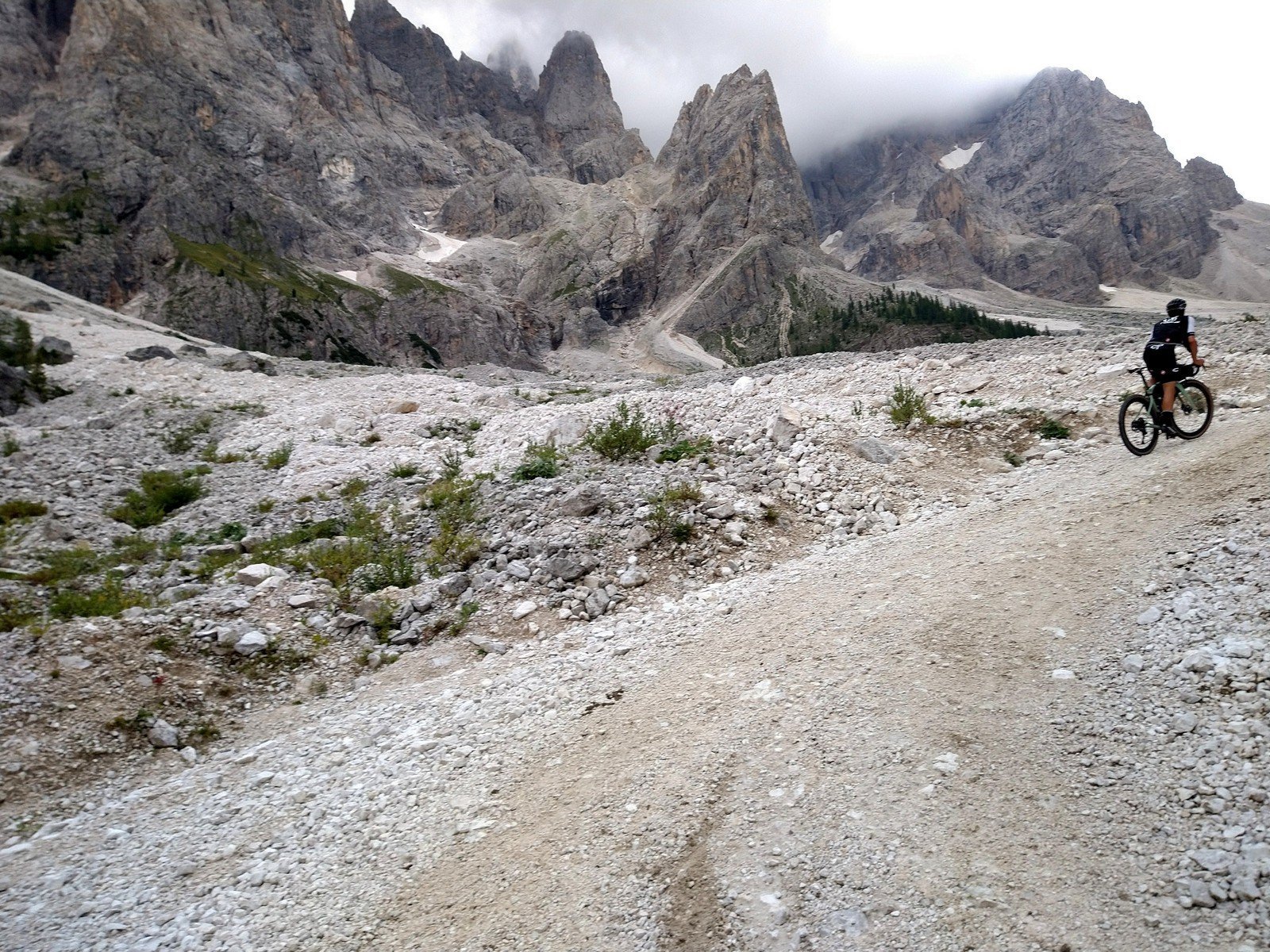 We know that from the point where we are leaving the track to the arrival, there is still some altitude to climb. The idea of not going along the paved road but backtracking the first kilometers of the route is indeed stupid: if until now we had followed a perfect route expertly created by a local, the last part we decided to do by ourselvers turns out to be largely non-cycle friendly. So, after almost six hours on the saddle, we are forced to some portage sections that we would have all gladly avoided during the last hour. 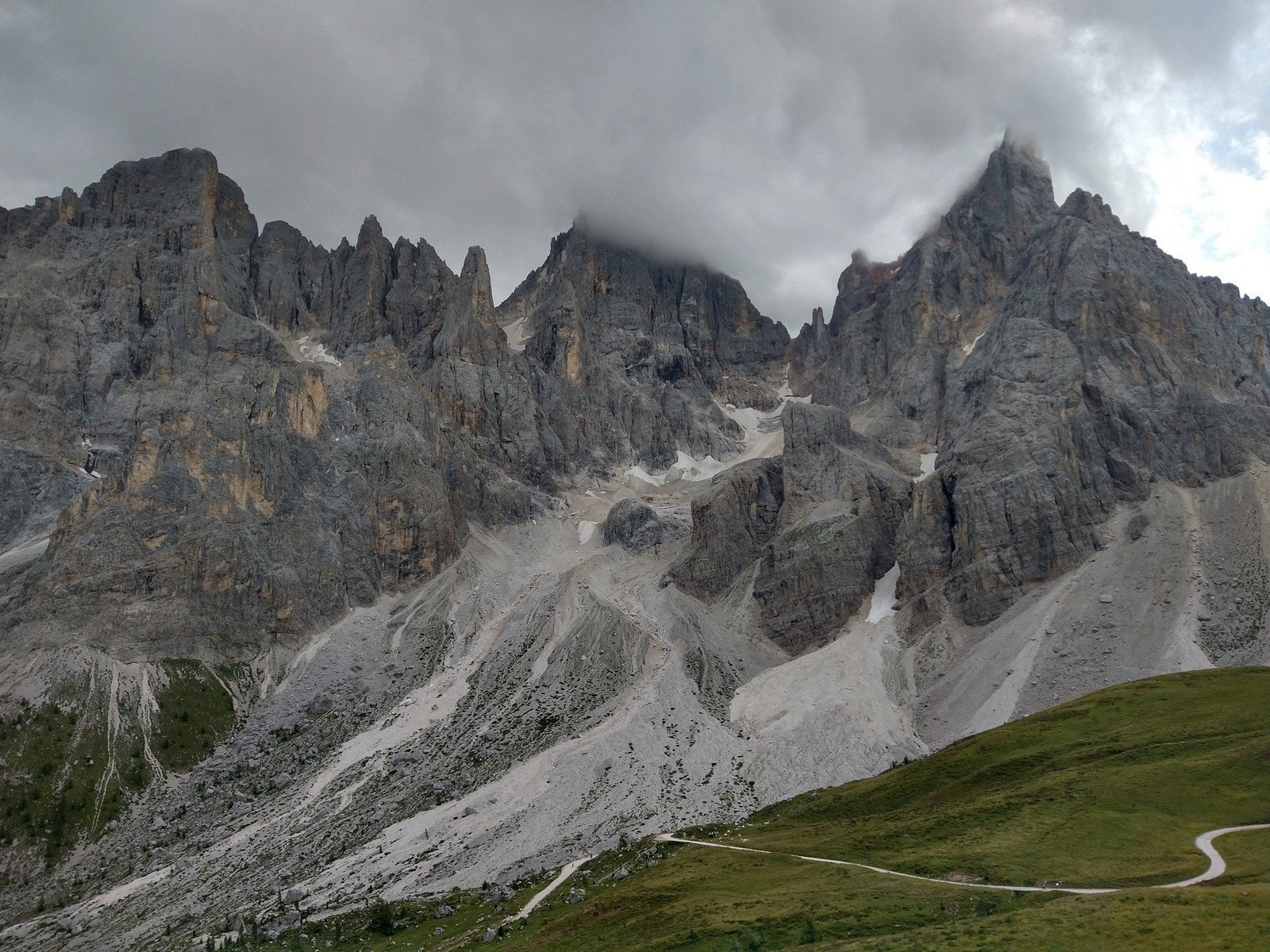 However, the finish line is now close and not even the rain, which has become even more intense, slows us down: we arrive at the village of Varena shortly after 4 PM (and we are the only participants to arrive there form an highest place… From the start about 90 km, 2,400 meters in altitude and 8 and a half hours of cycling have passed. 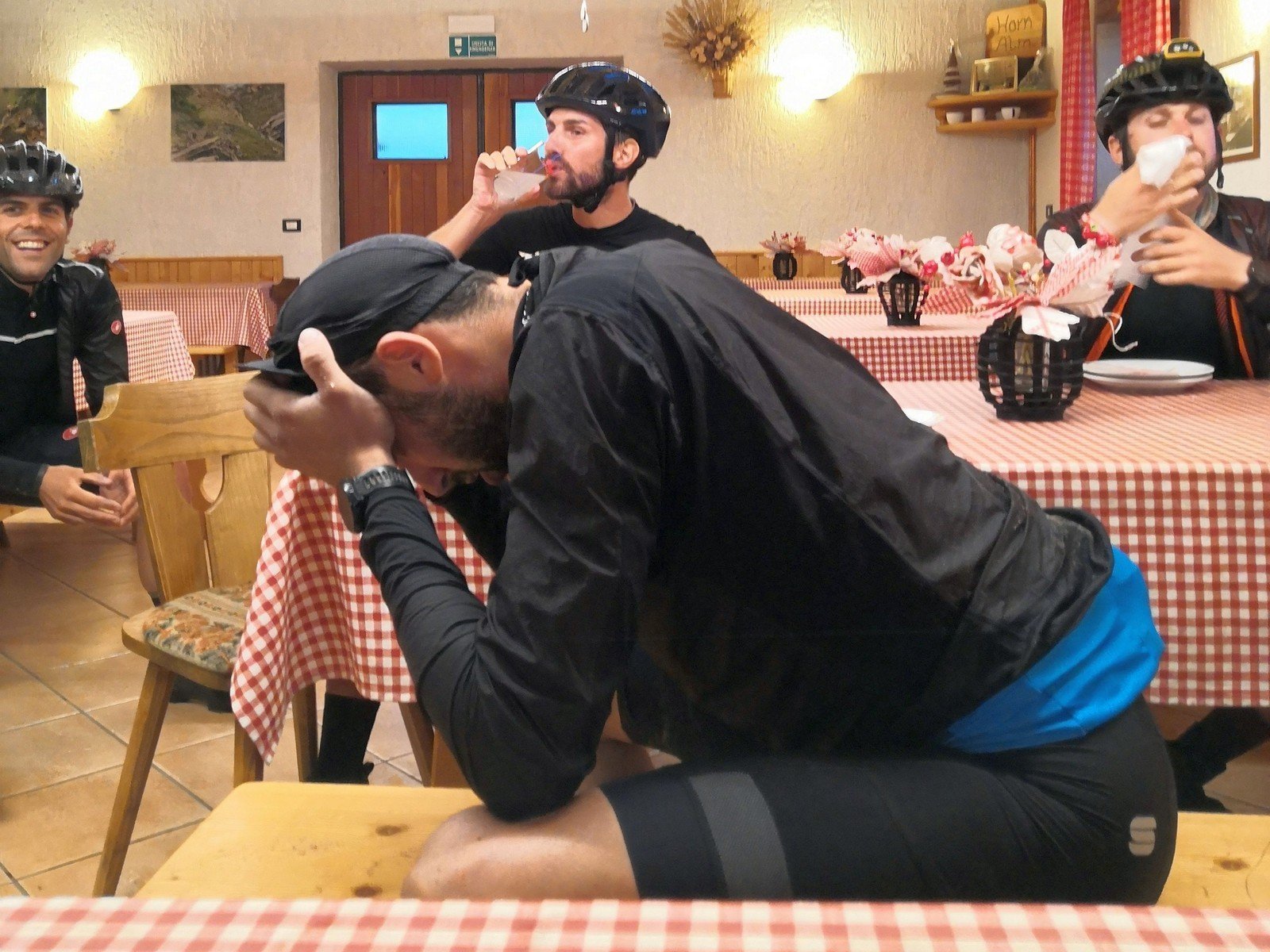 Waiting for us at the village there is a long night with the friends of the 3T crew that we left a few hours before. We have to wait until Sunday morning instead to watch the arrival of the only finisher of the Jeroboam 300: Nico Valsesia, who cycled for the whole night: the same night when more than one thunder made us jump in the bed. He shows up around 9 in the morning with the look of someone who has just come back from his usual daily walk. 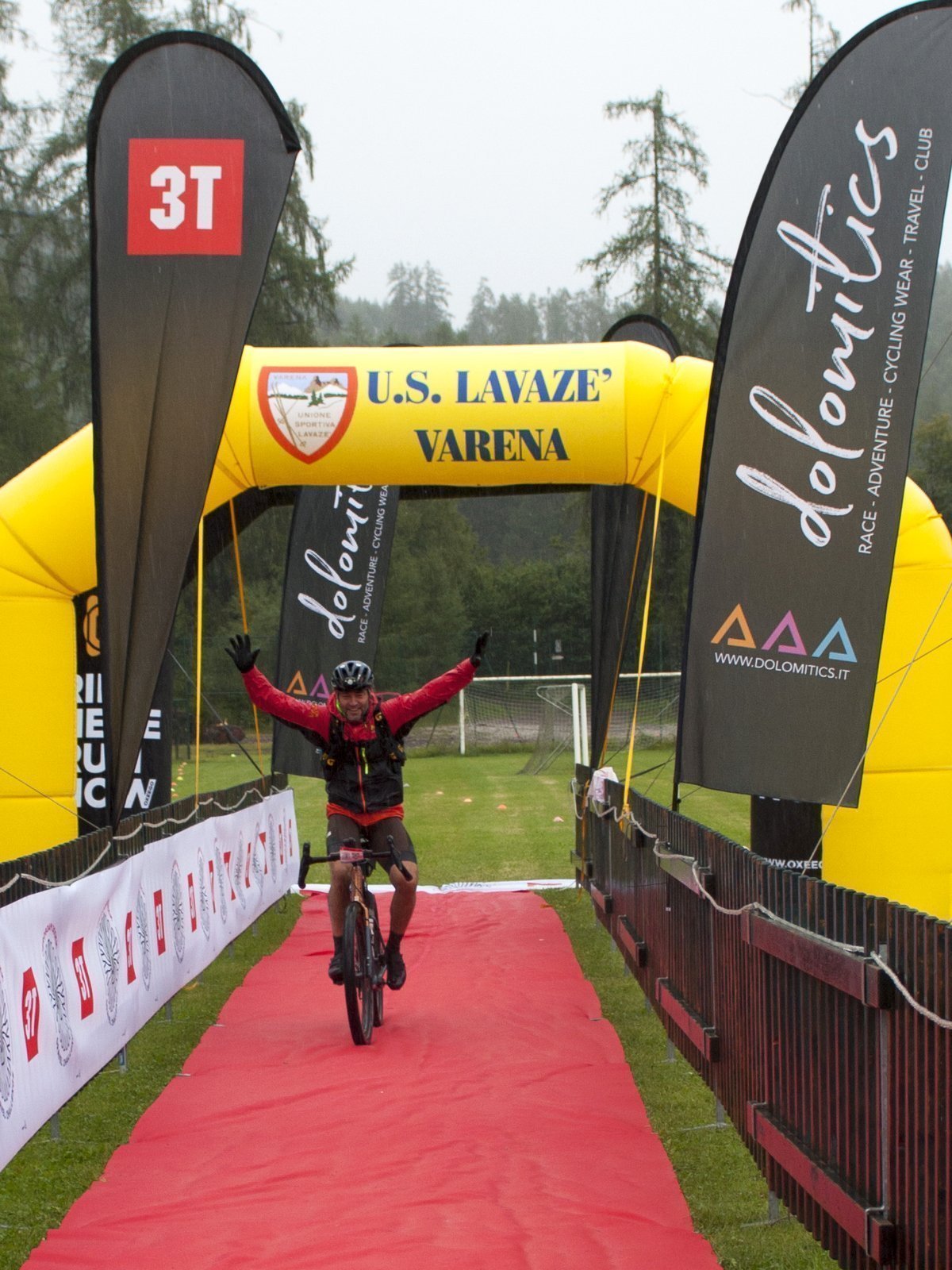 While we stand by and watch him, we cannot avoid to ask ourselves: “Could we have resisted the bad weather and fatigue a little longer?”
We leave Varena like this: thinking about returning next year to complete the course that we did not complete today. On a sunny day, if possible.

Our activity on Komoot here below: