During the 2020 our XPDTN3 had to stop for a few months due to the Covid 19 pandemic. So, after many exotic detinations, we decided to symbolically start again from Lombardy: the region where 3T has its headquarters and one of the most affected areas in the world by the health crysis. Here, from March to May it was not possible to cycle except to go and buy basic necessities: when it was possible to restart doing it for pleasure again, we immediately got in the saddle for our first XPDTN3 of the year..

For the first stage of this XPDTN3 we have what is called “a stellar cast”: there is Paolo Mei, official speaker of many professional races, from the Giro d’Italia to the Milan Sanremo, who will accompany us for all three days. In addition to him we have three “Explorers for a day” who will instead go only from Milan to Bergamo before taking over in a sort of relay with other cyclists. 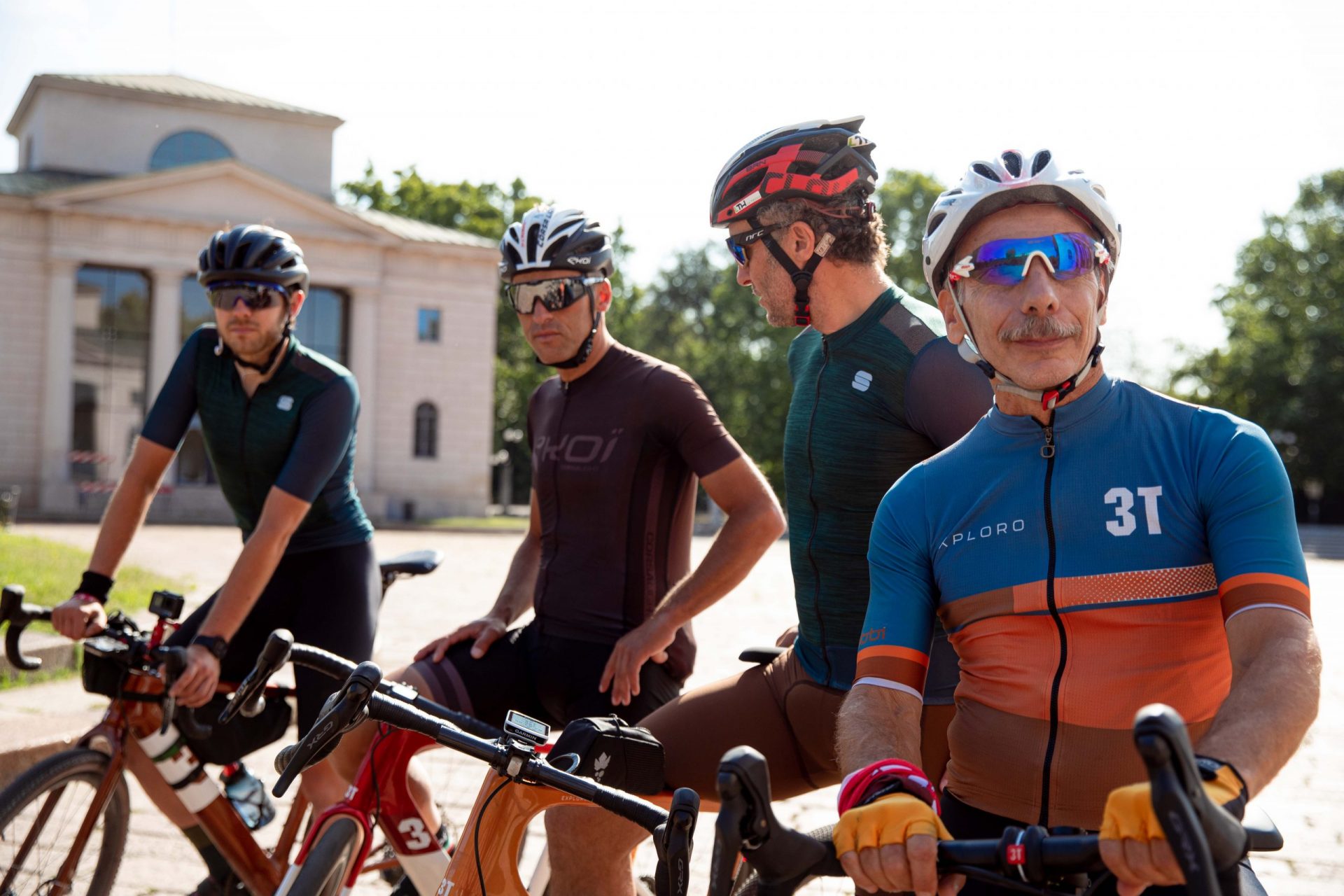 There is Giovanni Storti, a great lover of sports and nature as well as a very famous comedian in Italy thanks to the films of the trio “Aldo Giovanni and Giacomo”: the day will pass between numerous meetings with people who, after having recognized him, turn to him with some of the most famous quotes from his movies. Then there is Nico Valsesia, 3T ambassador and record man: his record attempt to reach the top of Everest from sea level (Calcutta) was postponed due to the pandemic, but at least we can have him with us today. Finally, to guide everyone following the route he himself designed on Komoot, there is the strong rider Federico Bassis. 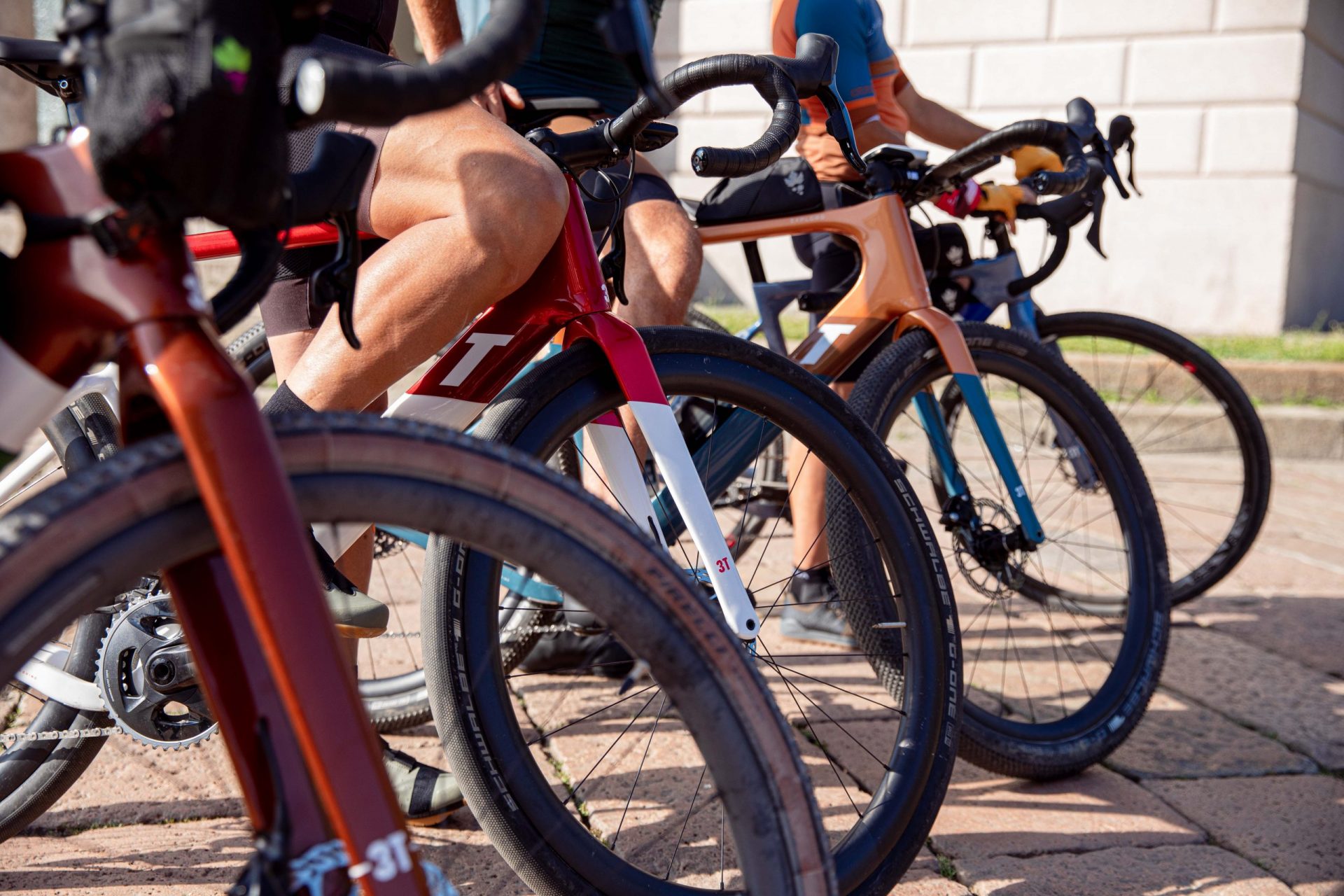 We all meet at Giovanni’s house, who lives a stone’s throw from the Arco della Pace, in the center of Milan. It is from here that we leave for Piazza Duomo, where we greet the Madunina and go ahead towards Bergamo: we will have to travel just under 80 km to get to Presezzo, in the province of Bergamo. 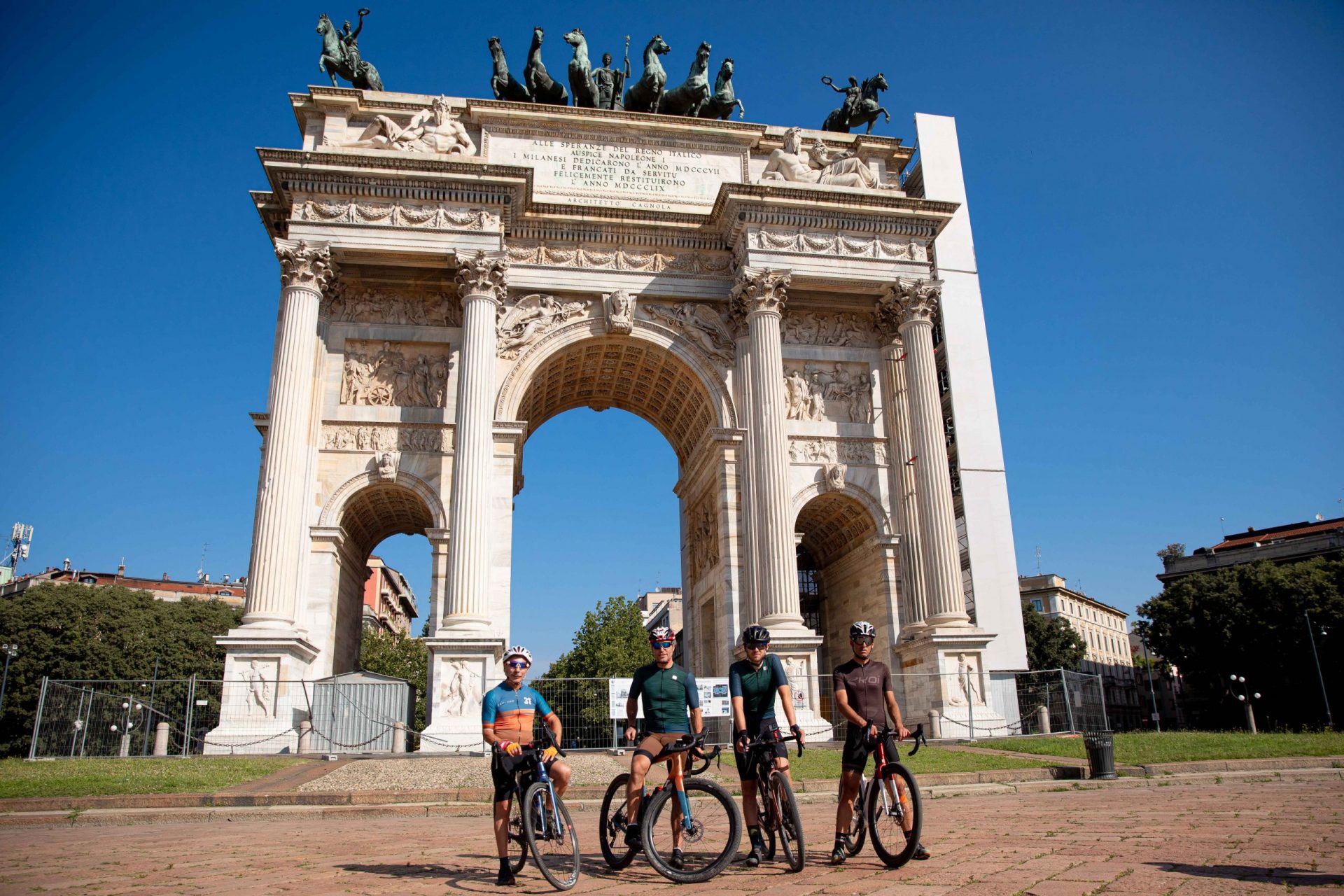 The start is slow: getting out of Milan means doing continuous slaloms in the not-so-bike-friendly traffic of the city. We add a puncture after a few minutes: Nico, however, is faster than an F1 mechanic at the tire change and the pit stop lasts only a few minutes. 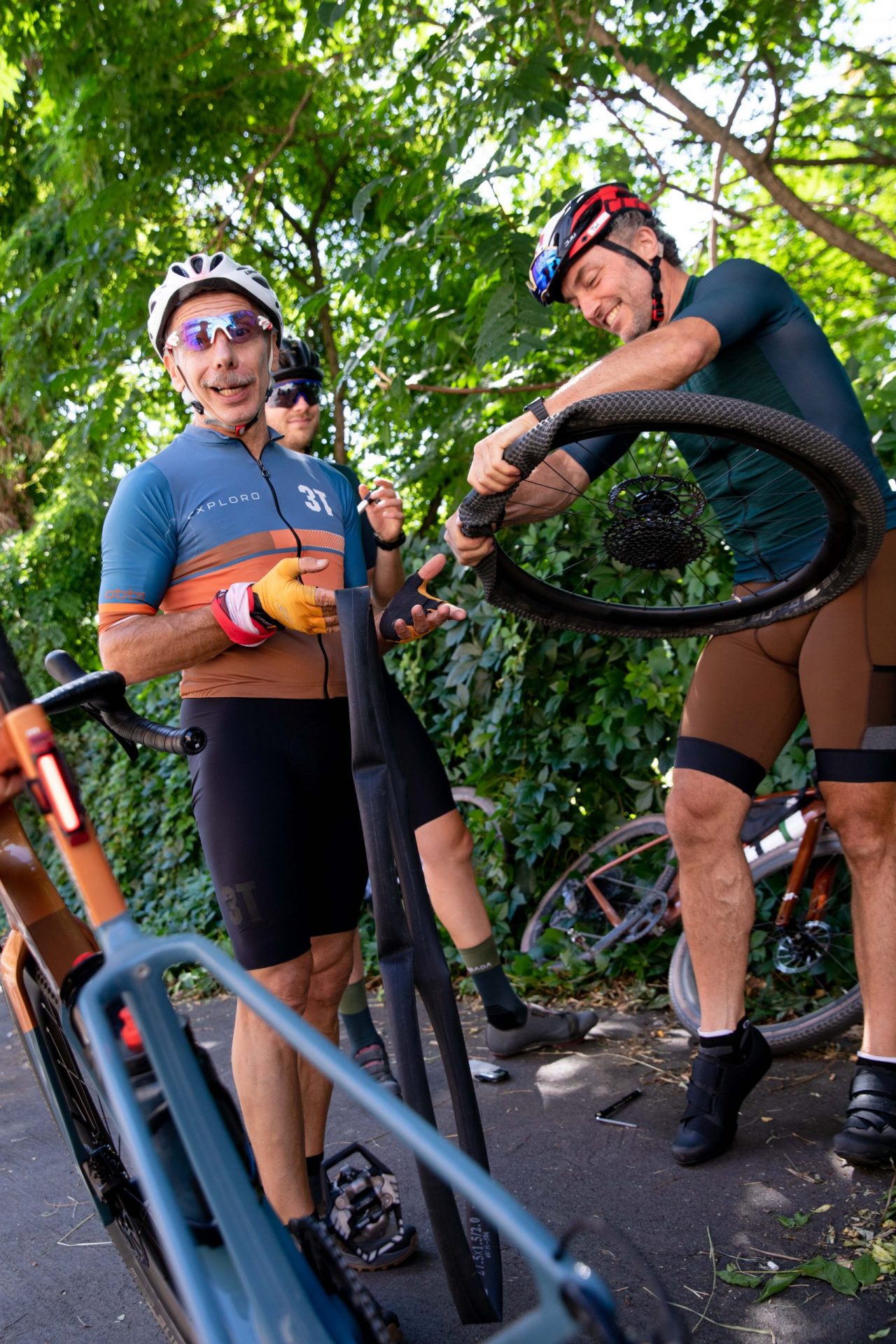 We leave for the beautiful castle of Peschiera Borromeo, where finally no longer the buildings but the trees are shading us. A  short stop and a few photos and then we go again. 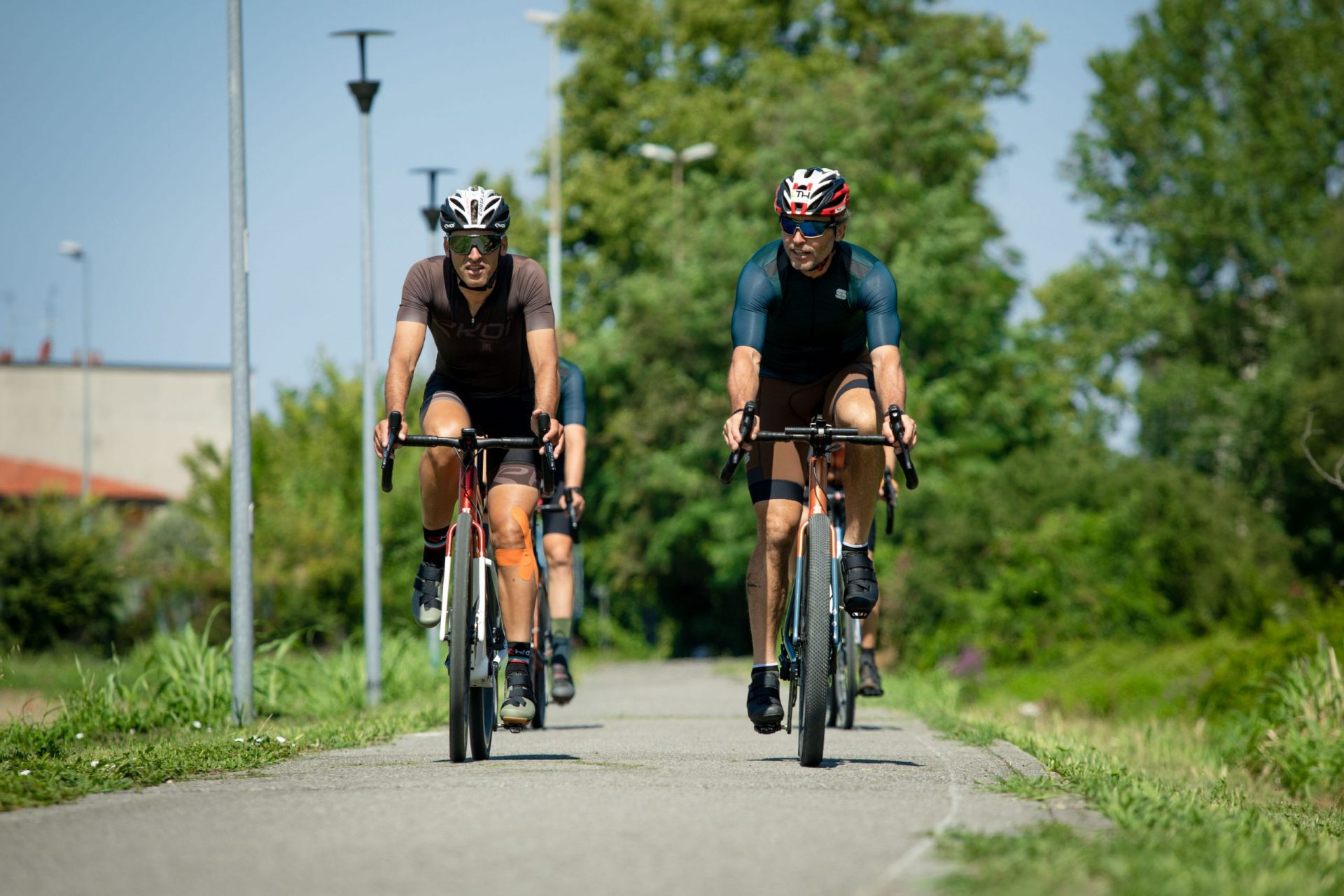 The mood in the group is finally cheerful and, now that the roar of the engines is finally behind us, we can chat to eachother. Giovani holds the bench with his inevitable jokes and also launches in a series of acrobatic figures on the bike joking that he does not use quick release pedals. 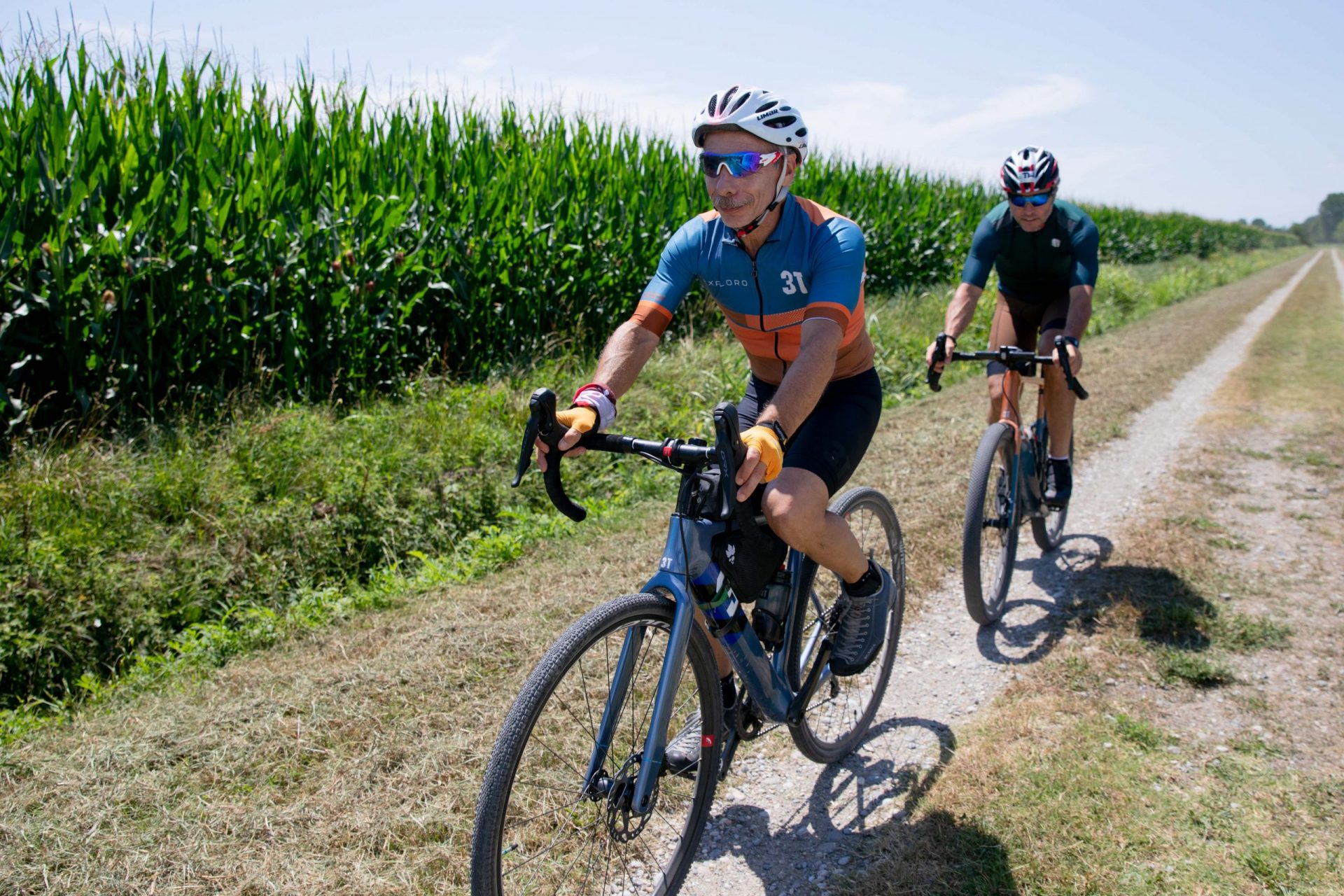 We quickly reach the beautiful Muzza creek, which accompanies us for many kilometers towards North, offering us the beautiful gravel surface of the paths that runs alongside it until it engages in the larger Adda river. 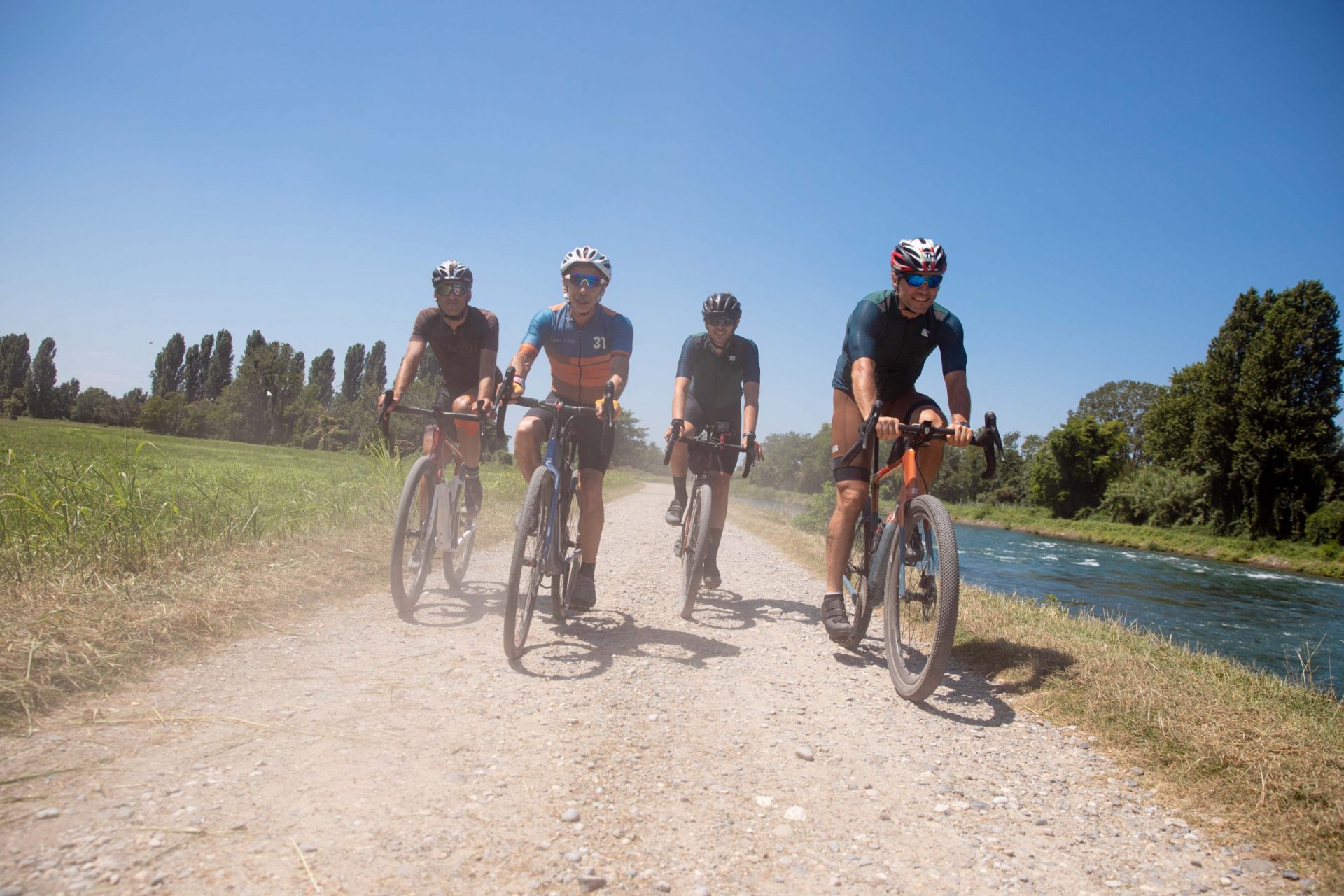 When this happens, the sun is now high and very hot and so far we have only eaten dust: we decide to stop at a bar in Trezzo sull’Adda for a quick lunch and a beer. From here there will be about 30 easy km to get to Presezzo. 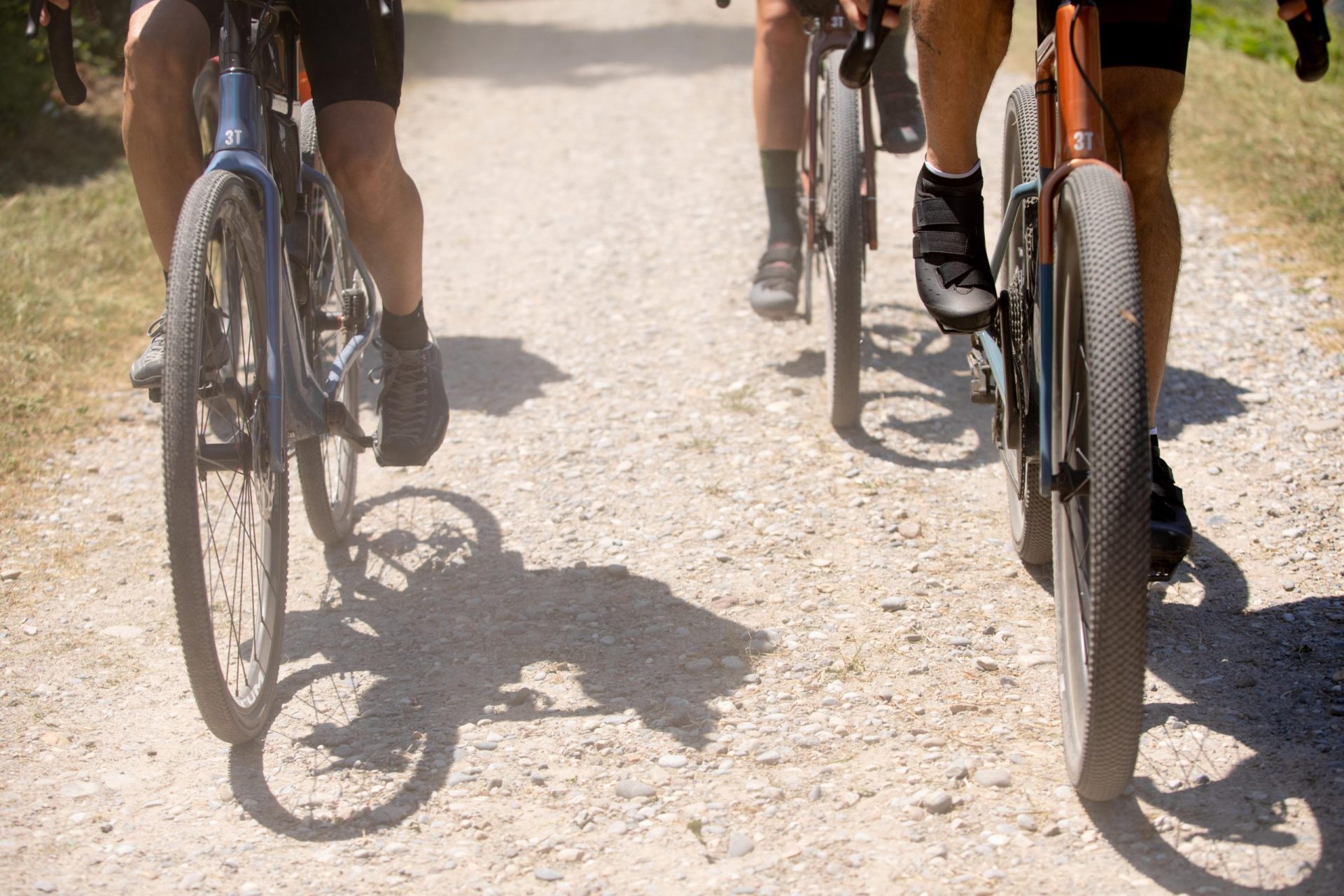 The lunch relaxes us further and now we joke non-stop, while the other customers look at us sideways as they wonder if this is the famous actor Giovanni. When the first of them decides to get up to ask him, the long ritual of pictures with the star begins.

We leave a bit lazily: we would not like to leave the coolness of the shaded terrace on the river for the sunny paths, but in Presezzo they are waiting for us and so we get back in the saddle to ride alongside the Adda river. 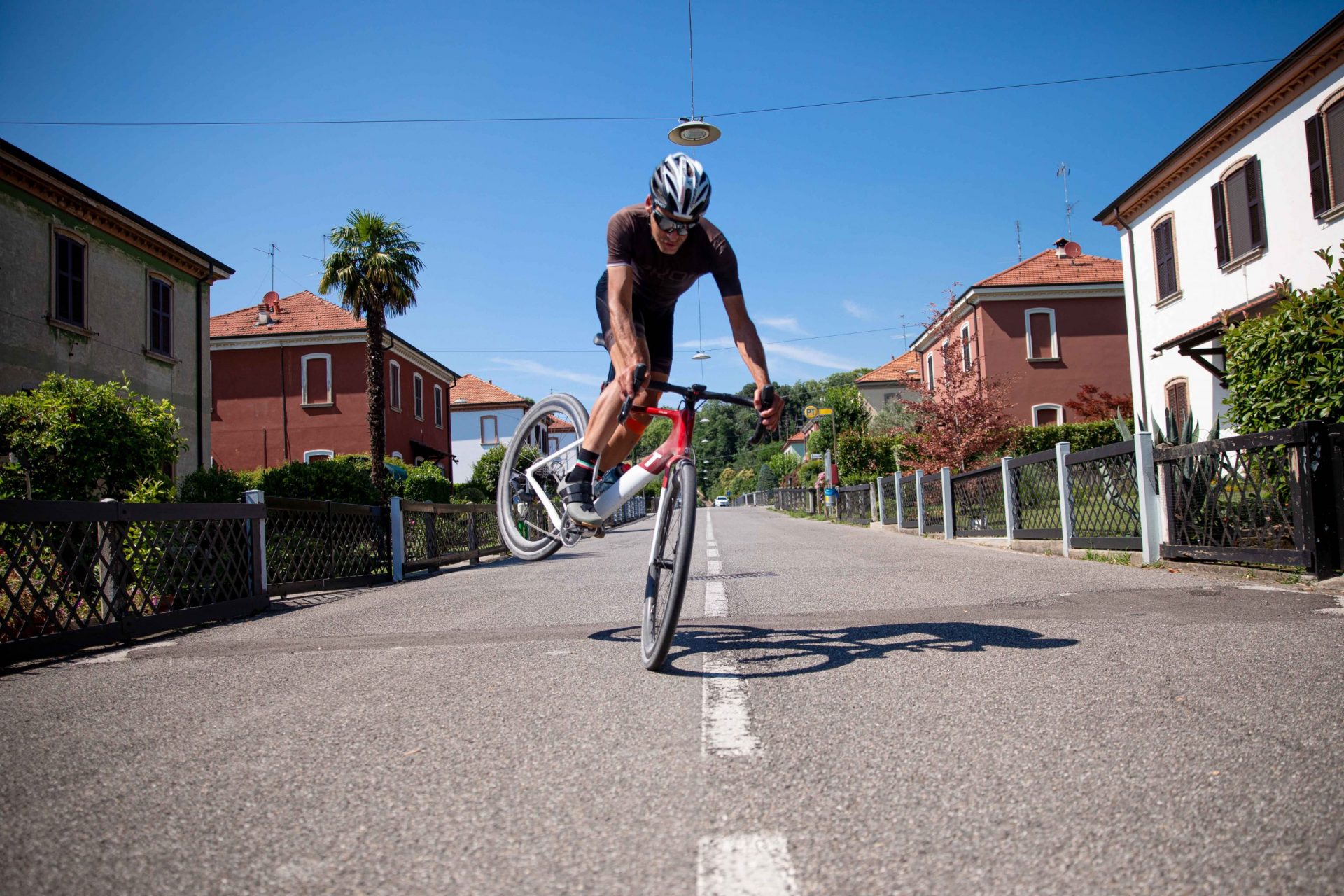 We stop just once at the spectacular workers’ village of Crespi d’Adda: here hundreds of small houses all alike surrounded the large textile factory which even had its own power plant when production was at maximum capacity: a unique working community experiment in history which still attracts the attention of scholars. 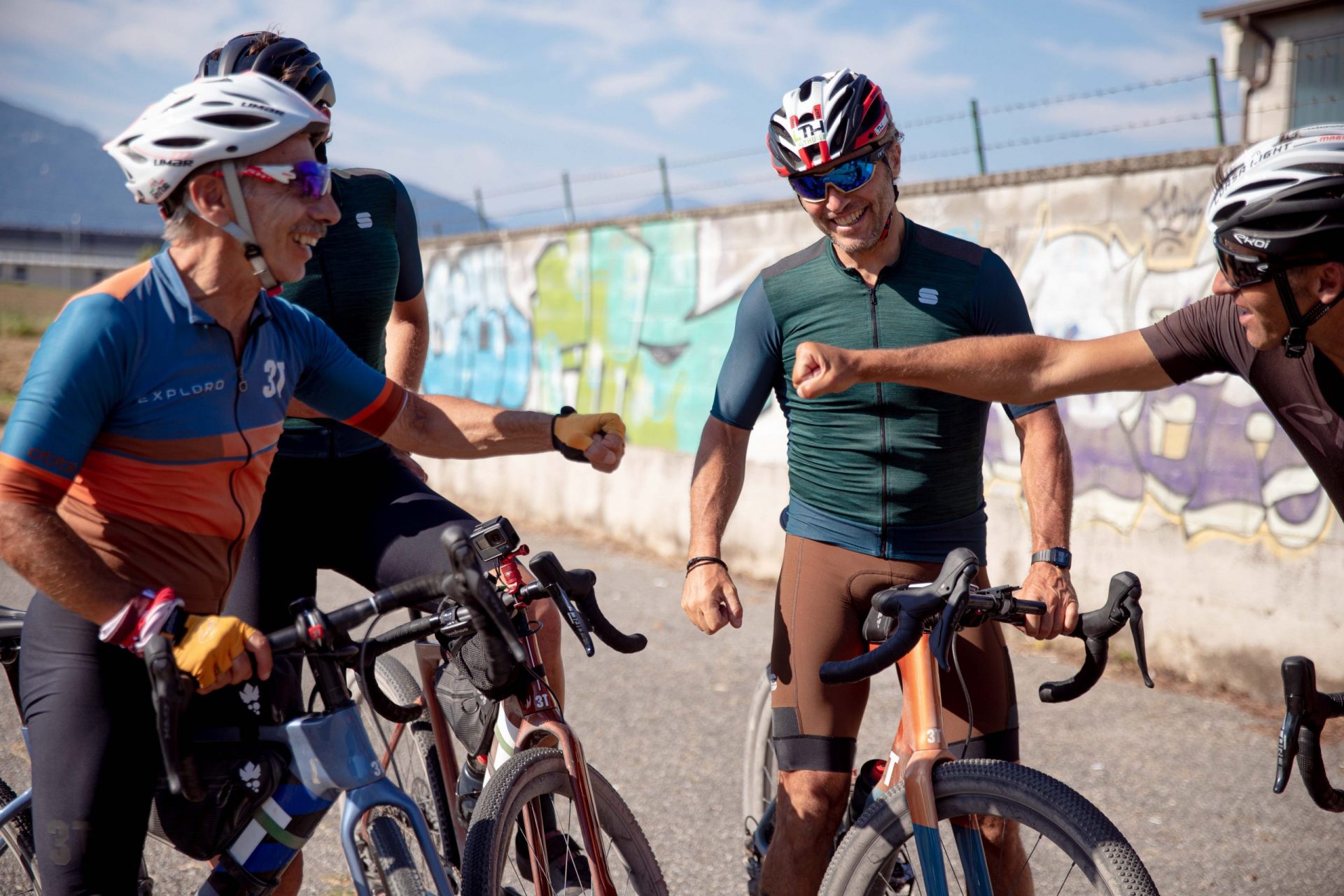 It is almost 5 pm when we arrive in Presezzo: Giovanni takes the final avenue accelerating and simulating a sprint victory in a great stage race. We arrive at the 3T headquarters and there we’re greeted by Rene Wiertz, CEO and President of the company and Paolo Alessio, mayor of Presezzo tomorrow it will be their turn in the saddle.

In the second day of this XPDTN3 we started in Presezzo from the 3T headquarter heading to Brescia. 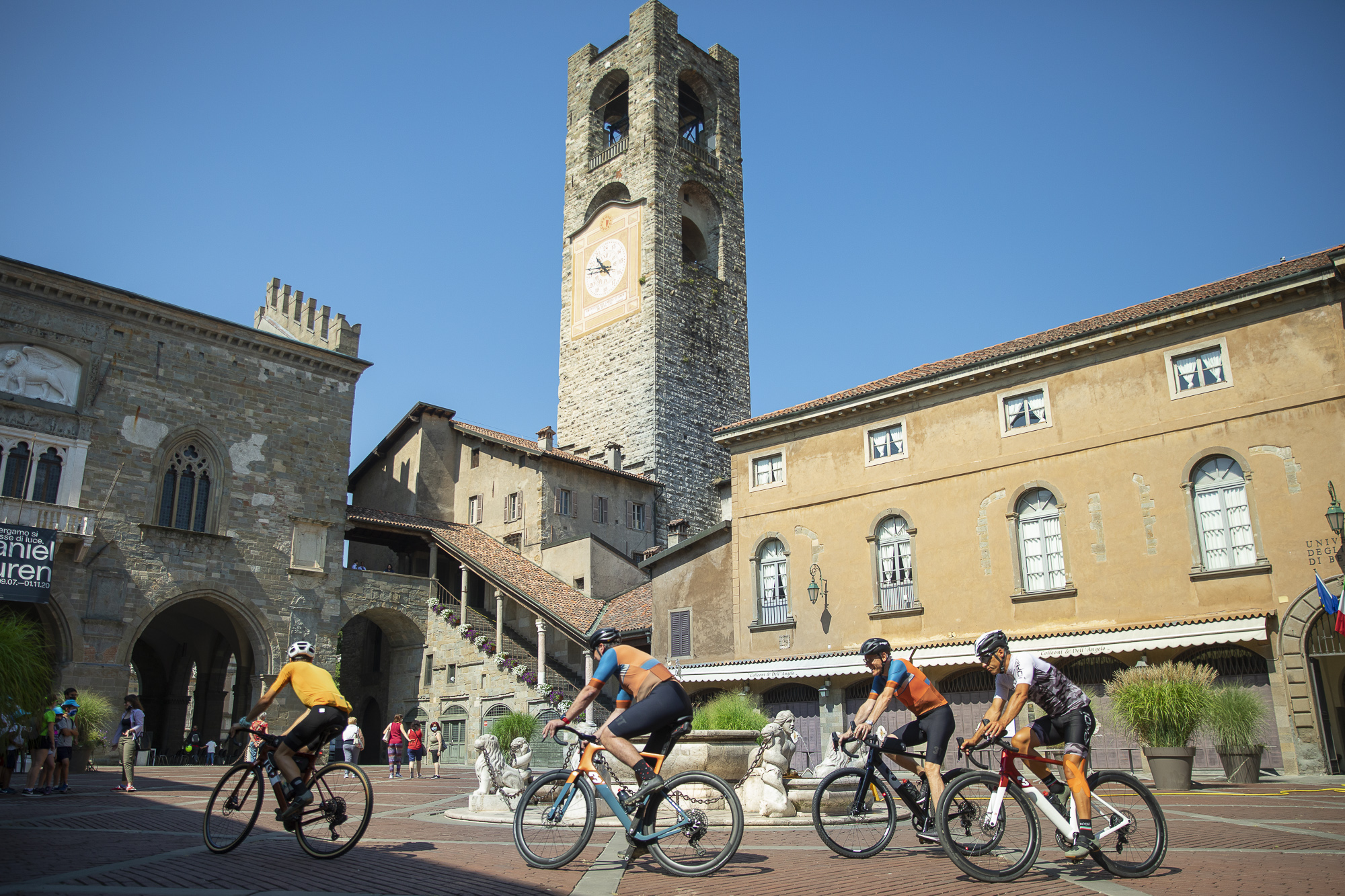 This road is 92 km long and runs on flatlands and shallow hills for a total elevation gain of 620 meters; beyond the landscapes and the nice gravel roads surrounded by grapevines, the track has a powerful symbolic meaning. Indeed the track connects the provinces of Bergamo and Brescia which are the first and most hardly struck lands by the first outbreak of the COVID-19 epidemics. 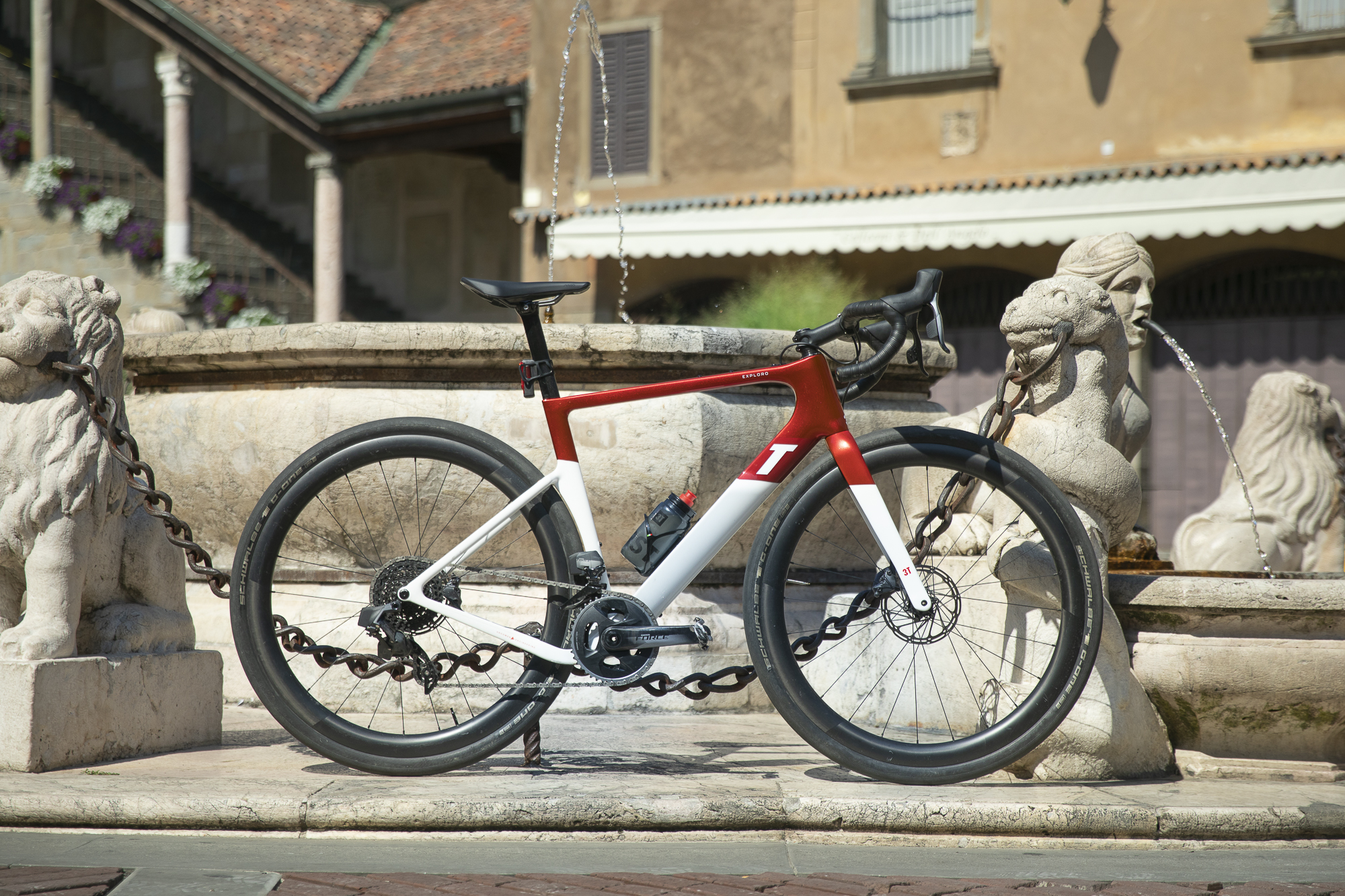 Right outside Presezzo, after few kilometers from the start, the road leads to the beautiful city center of Bergamo, Bergamo Alta, to the Piazza Vecchia. In this magnificent square, we refilled our water bottles from the sphinx mouth of the Contarini Fountain. If you come across the square at noon just be sure to check the date at the sundial marking also the day and the zodiac sign. 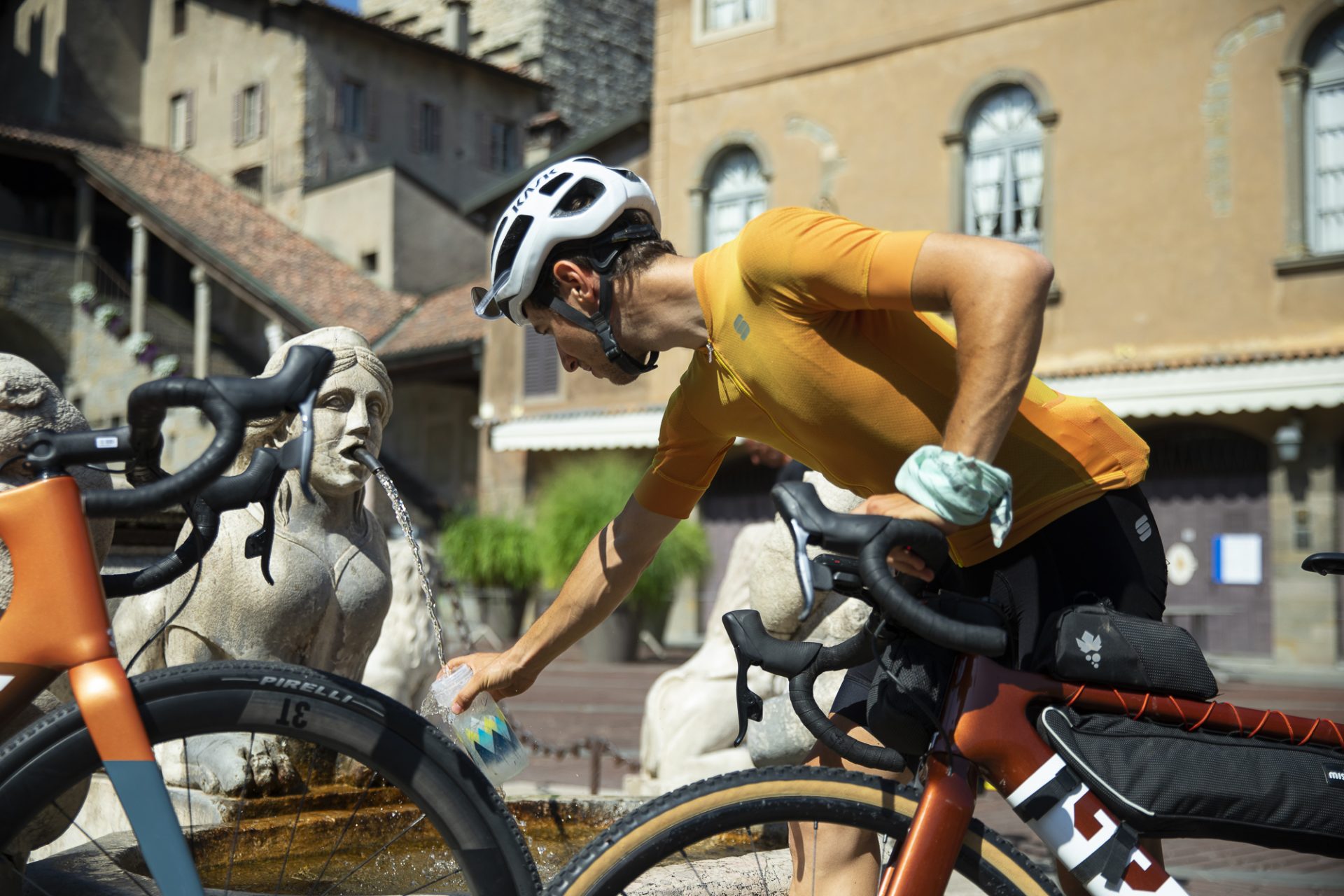 Cool and freshened we started riding again through some beautiful gravel sections along the Oglio River cycleway and we reached the wonderful grapevines of the Franciacorta, home of the delicious and unique sparkling wine. On the northern boundary of these hills we crossed the peat bog sitting on the bottom of the Iseo Lake. We rode on a thin macadam road in this natural park, stunned by the beauty of the landscape and watching many birds flying away while we were passing. 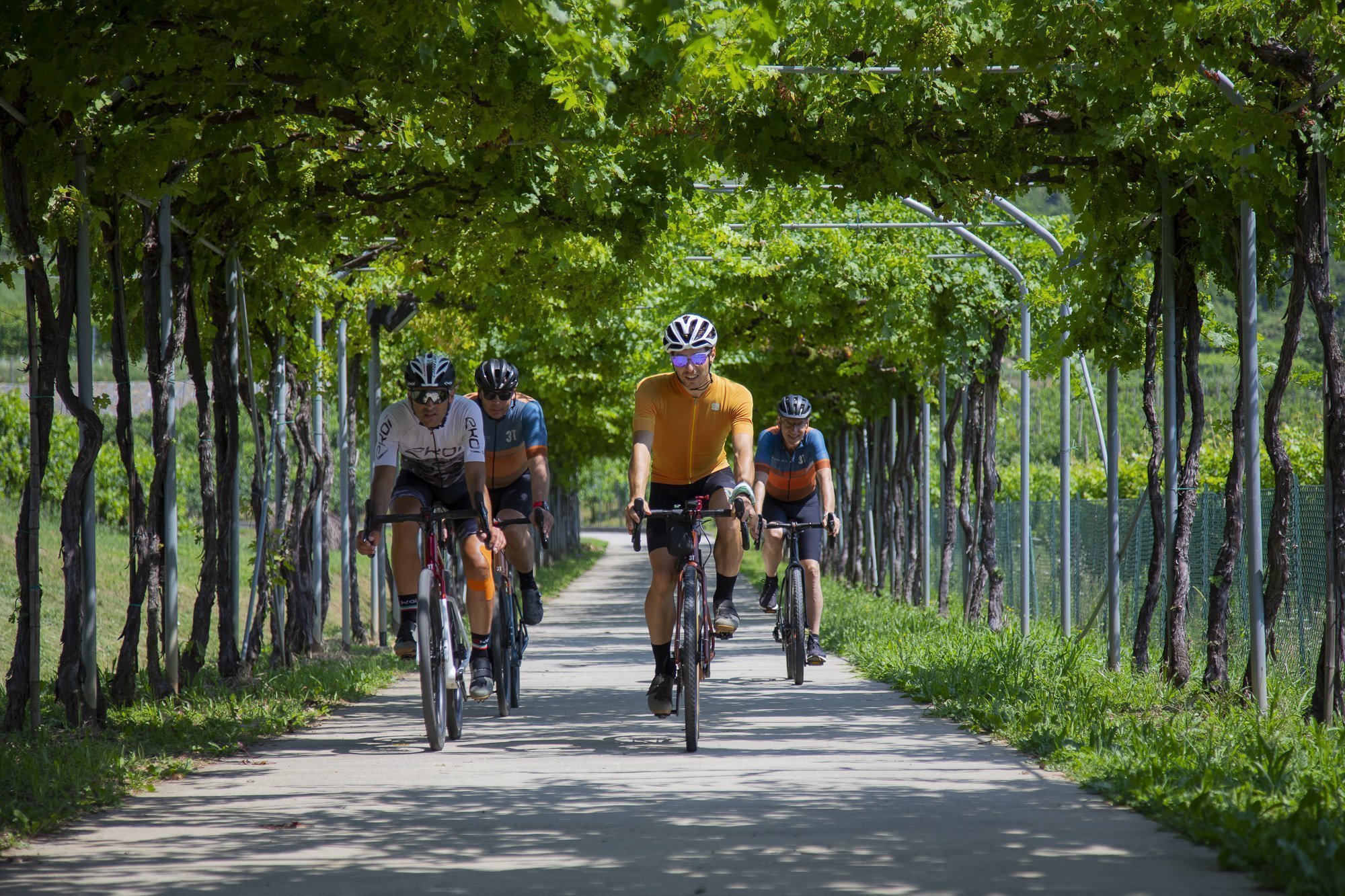 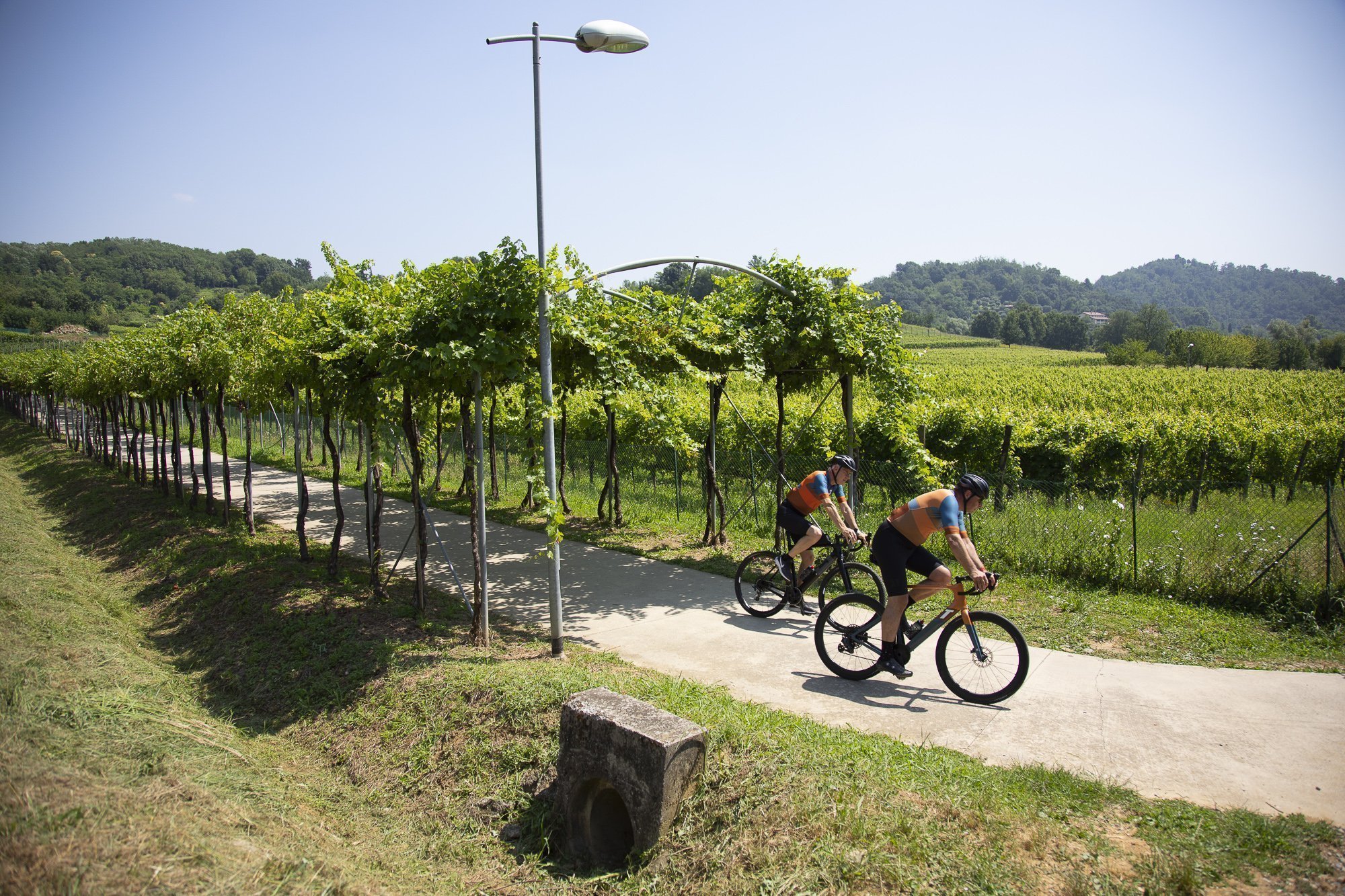 After that we had to say goodbye Renè and Paolo Alessi who had to get back home before the evening but our journey continued on the cou Jeroboam gravel event. We rode across many other nice spots, like the ancient village of the Forge of Ome where knifes are still made by hand just using a powerful watermill.

In the end we arrived in Brescia and we stopped right in Piazza Loggia, the real heart of the city, a square deeply filled with recent and ancient history. Stopping by with Paolo Mei we could even feel the cycling history as, right in this place, Vincenzo Nibali has been crowned winner of the Giro few years ago. 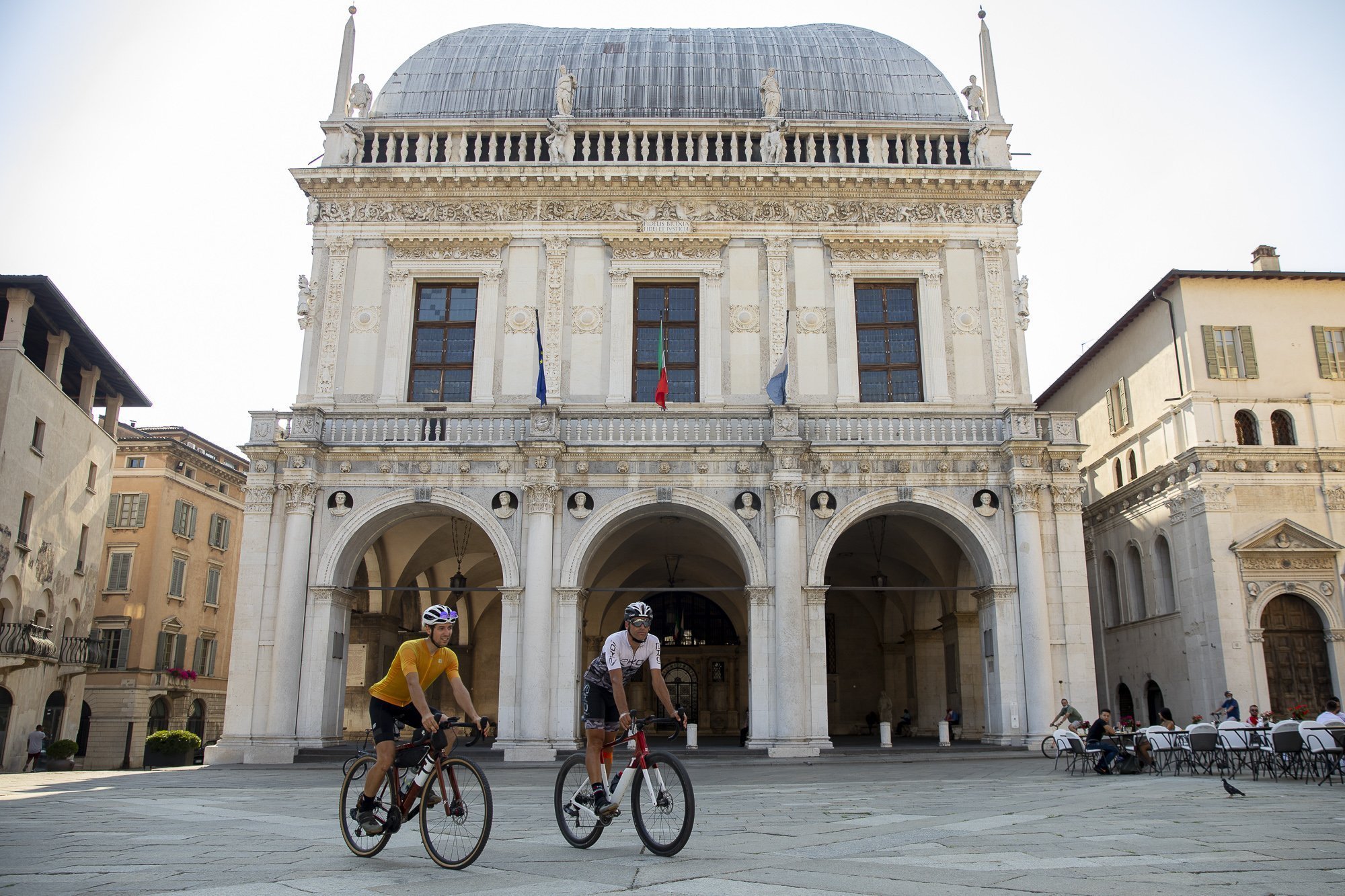 The third and last day of XPDTN3 Lombardy engaged me (Eric) and Edi from 3T, Niccolò our doctor and 3T ambassador, and again Paolo Mei. We ran from Brescia to Peschiera del Garda, a nice village on the lake shore of the Lake Garda. 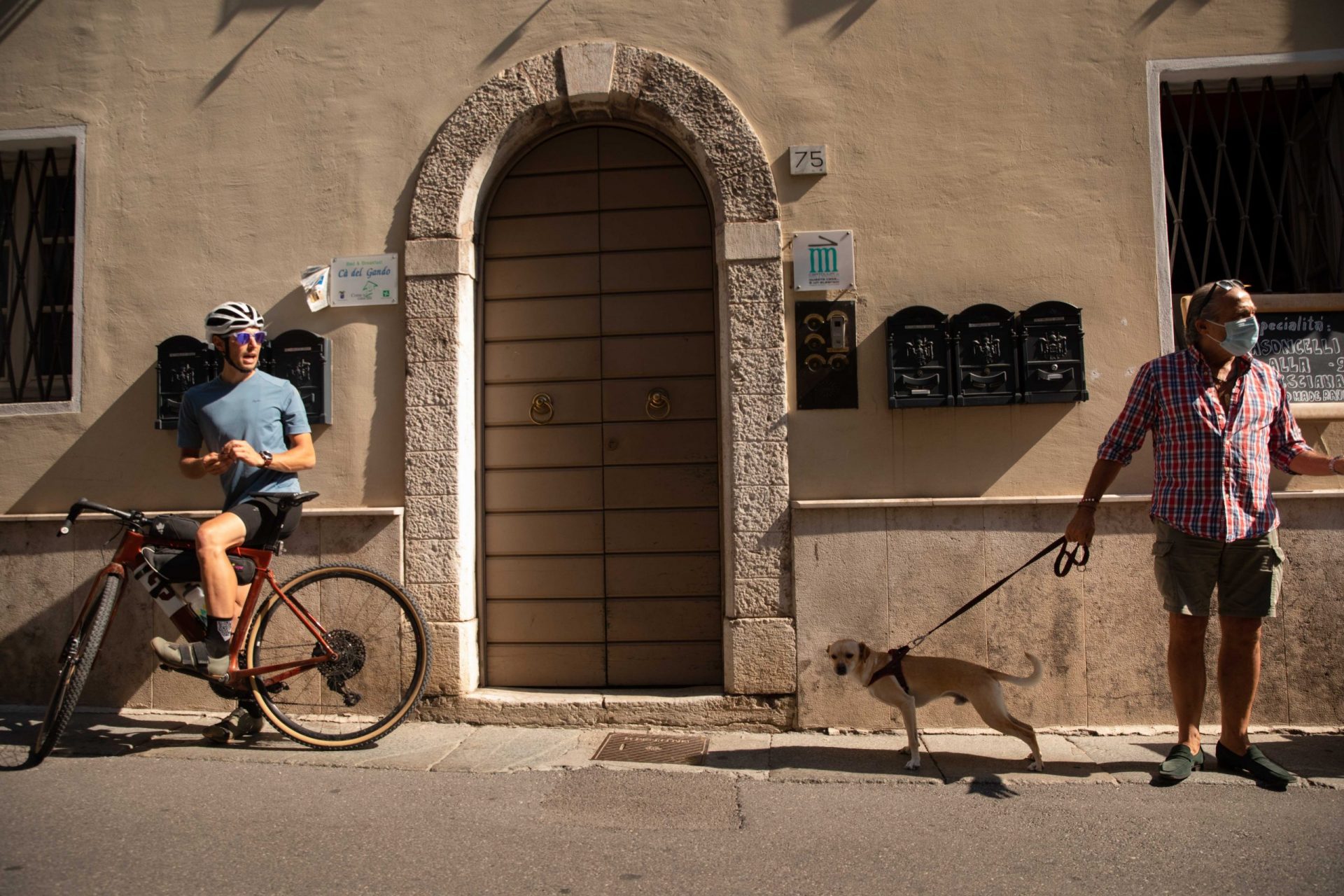 The start was at 9:00 o’clock from Piazza della Loggia in Brescia. From there we moved under the old ruins of Brescia, and later out of the downtown, where the gravel roads started, leading us into the green of Pianura Padana, through vast wheat crops. 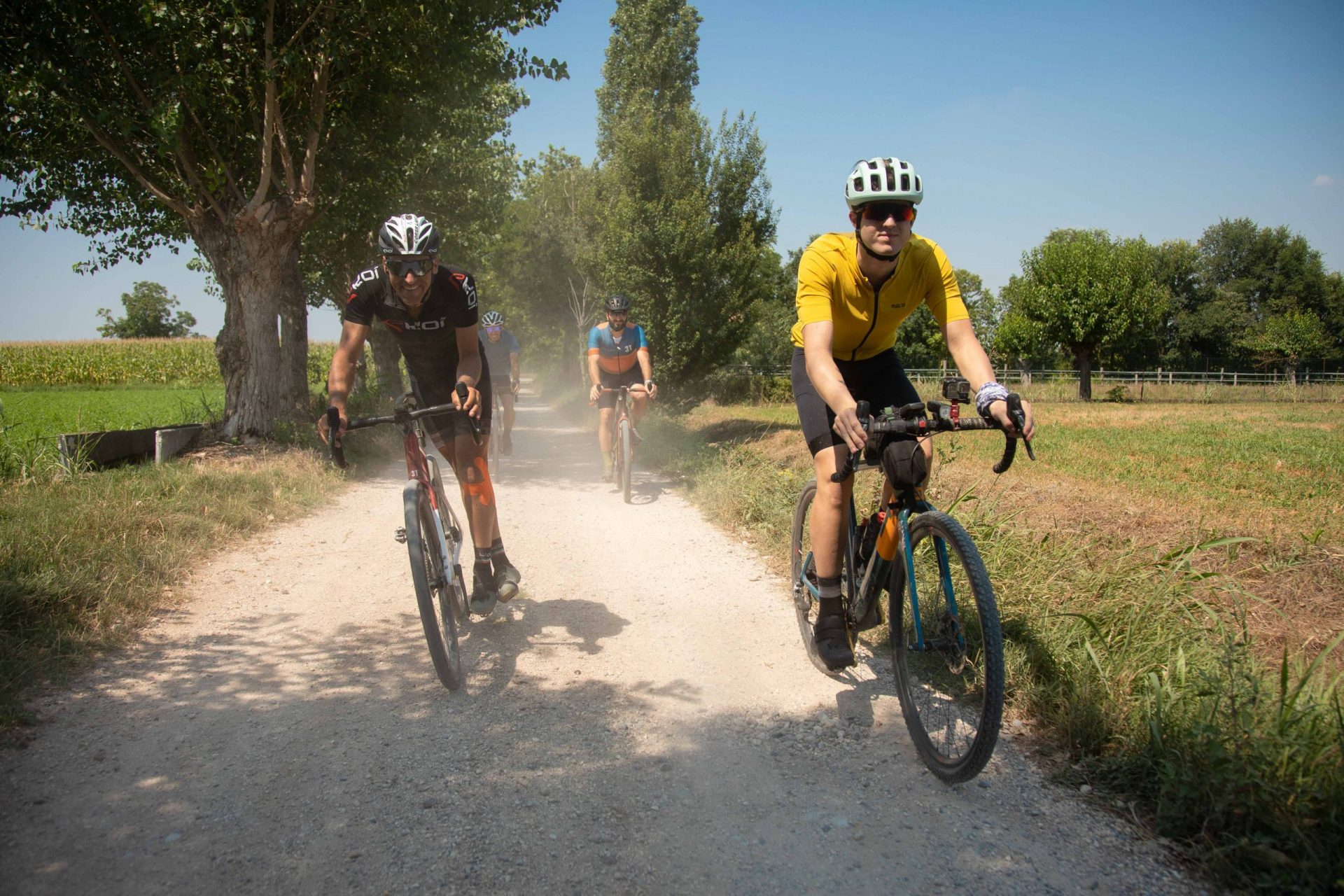 The sun of summer was heating us and get the path dry and dusty, our Exploros were getting dirtier and more but more attractive at the same time. Luckily sometimes we bumped closed to big watering cans being pleasantly refreshed by their jet of water. 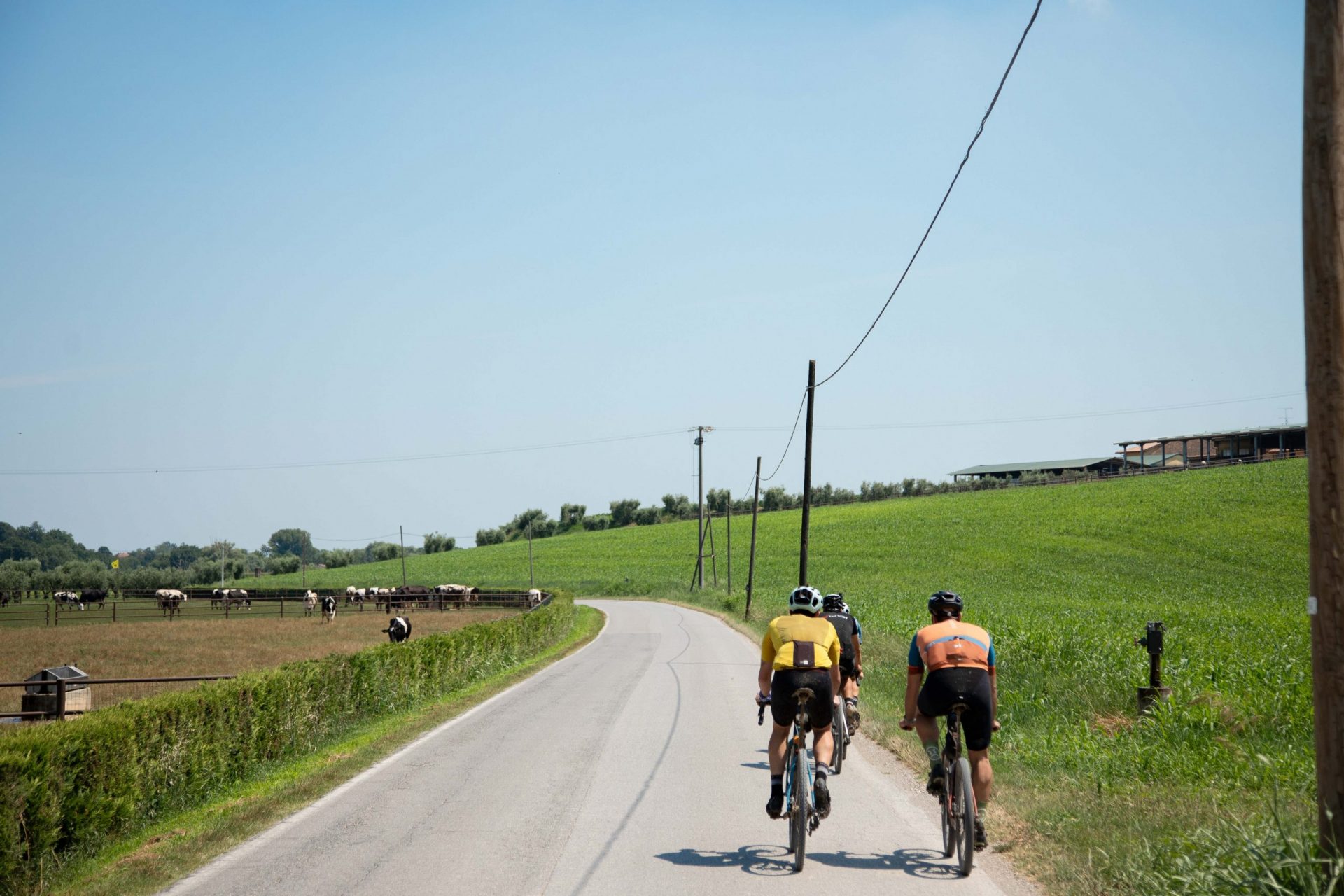 Reached the halfway of our track, we decided to have our lunch. We were in the middle of fields, where didn’t seem to be any restaurant nearby, but a local who was passing for our route suggested us a small restaurant for workers, pretty close. 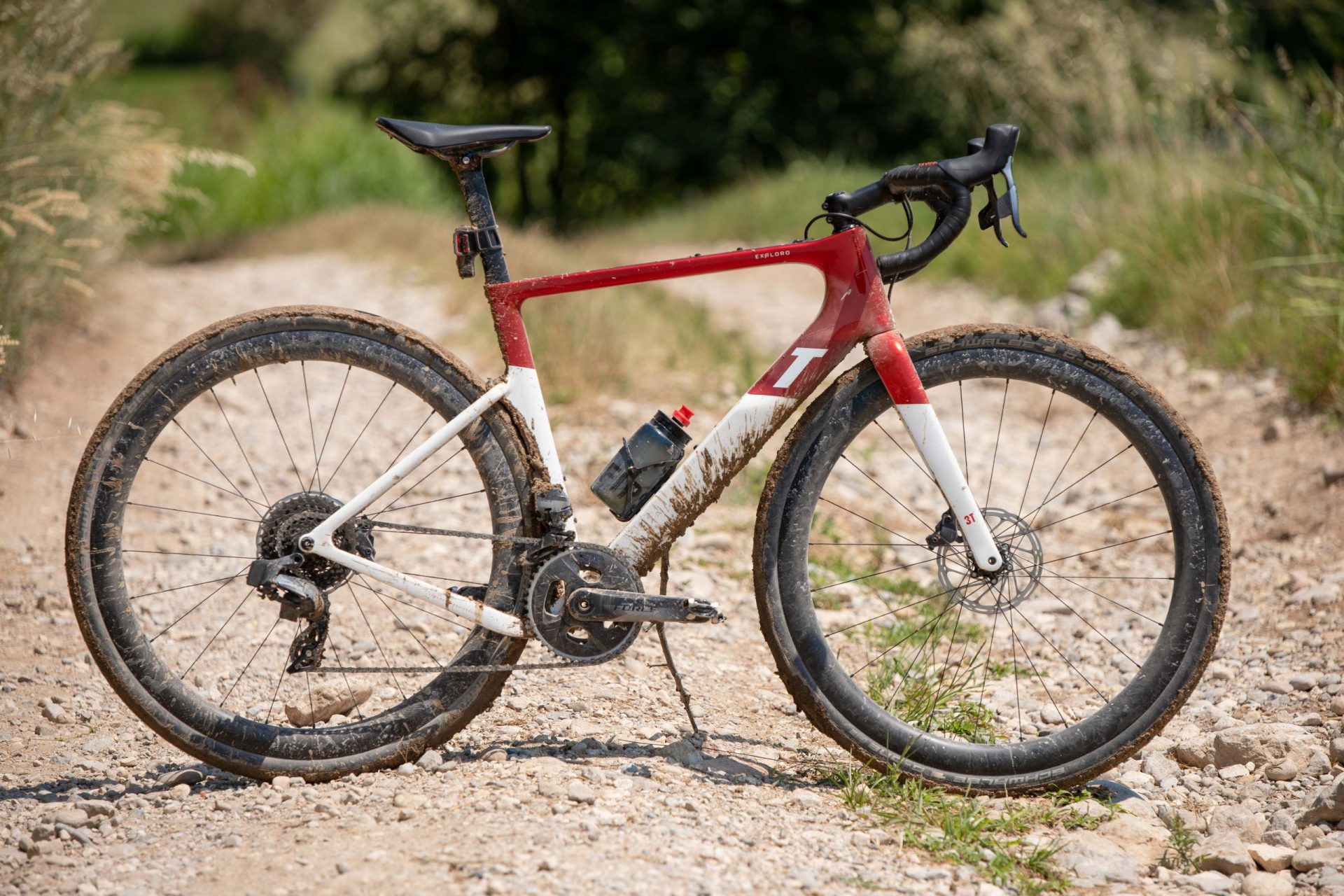 We enjoyed a big meal, made of typical dishes, good wine, and beers. 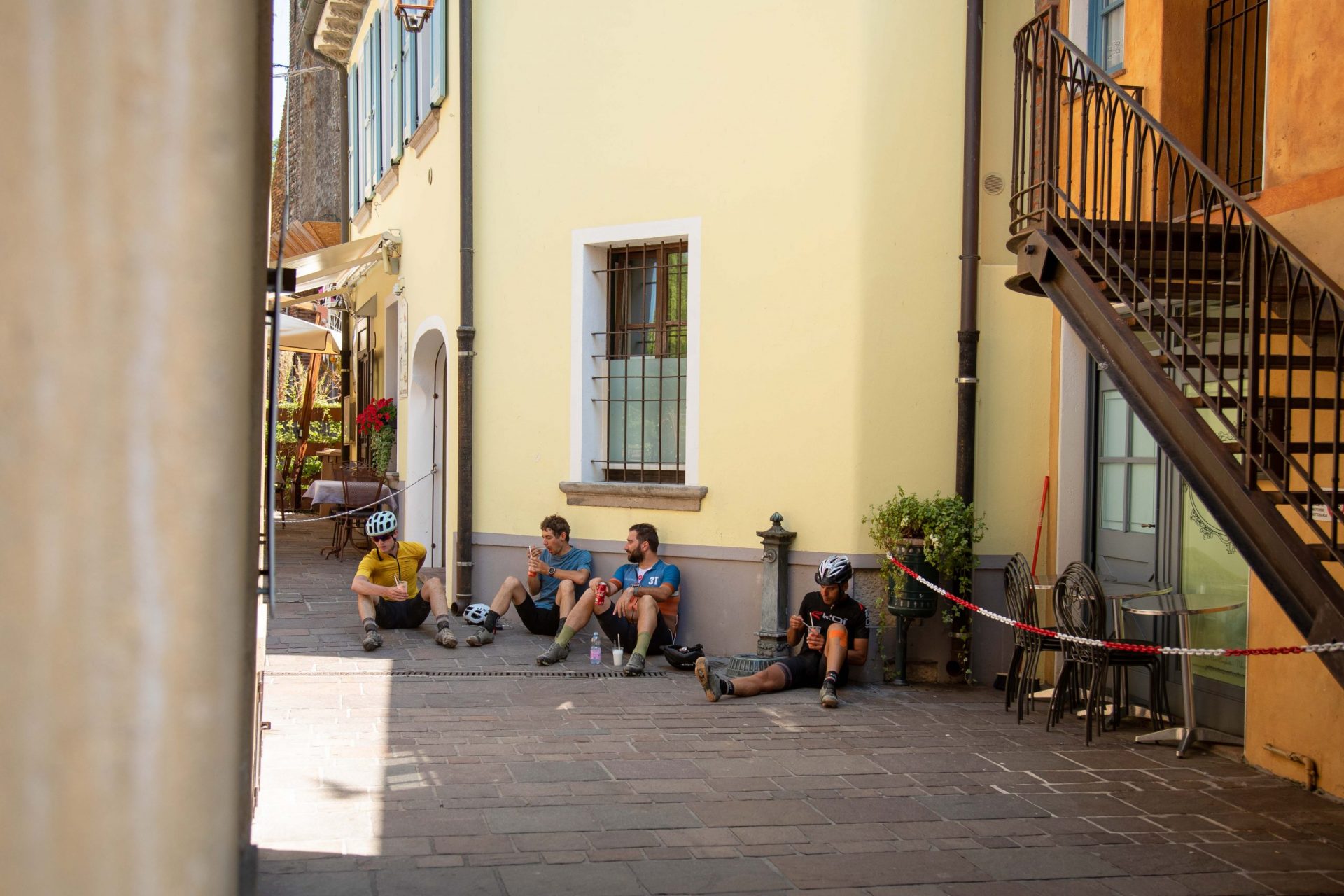 Leaving the restaurant and saddle up on our bikes was hard; inside the restaurant was warm, while outside the sun was above 35 degrees. The path turned from gravel to tarmac, but the route was still really nice in the middle of the countryside, with many farms. 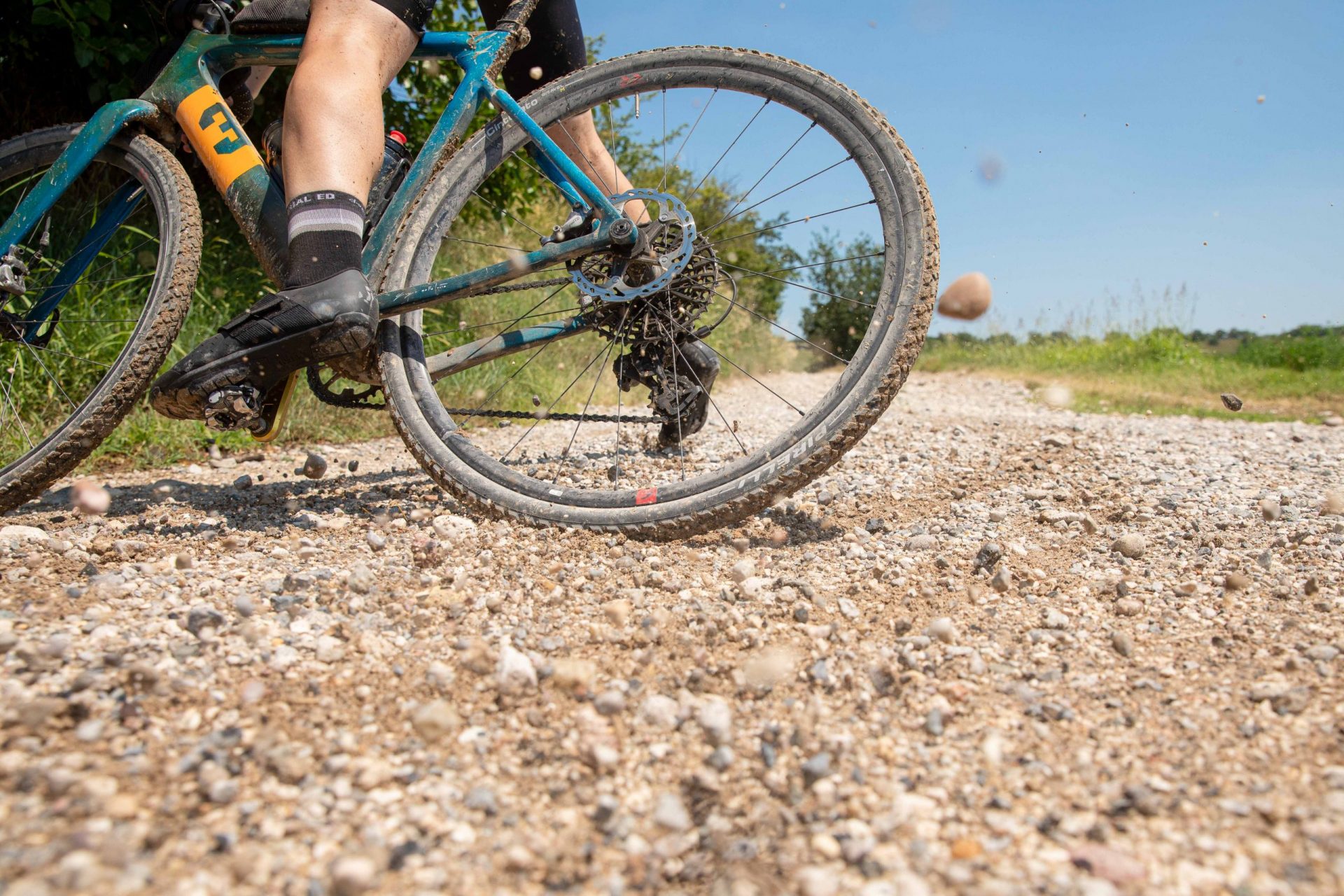 During the afternoon before the last stretch for Peschiera del Garda, we stopped at Borghetto a small and beautiful rural village along the Mincio river. There we had a delicious and refreshing Sicilian granita. 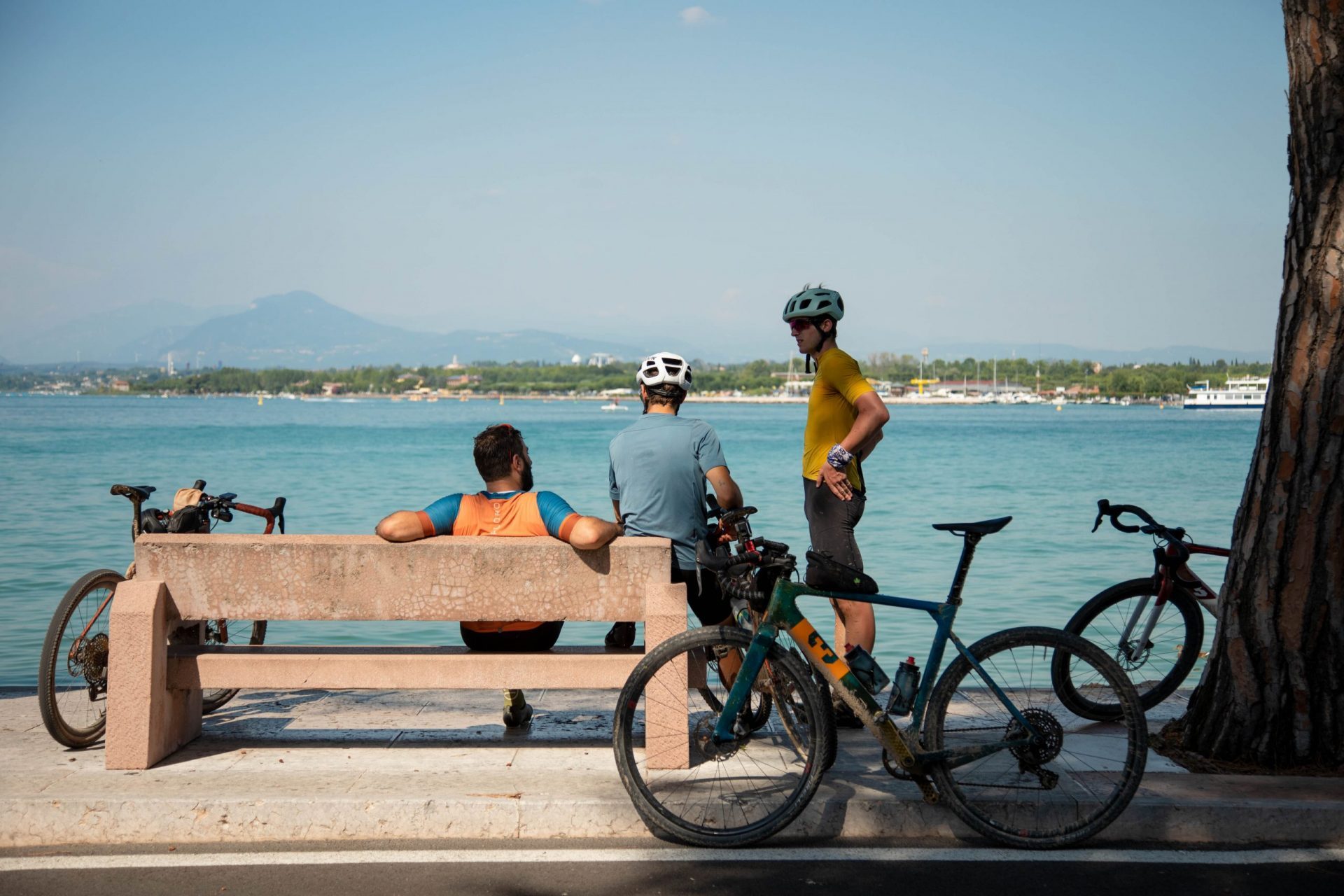 Then we rode until our finish lane, a little beach in Peschiera del Garda, where we dived into the lake, and where we ended our XPDTN3. 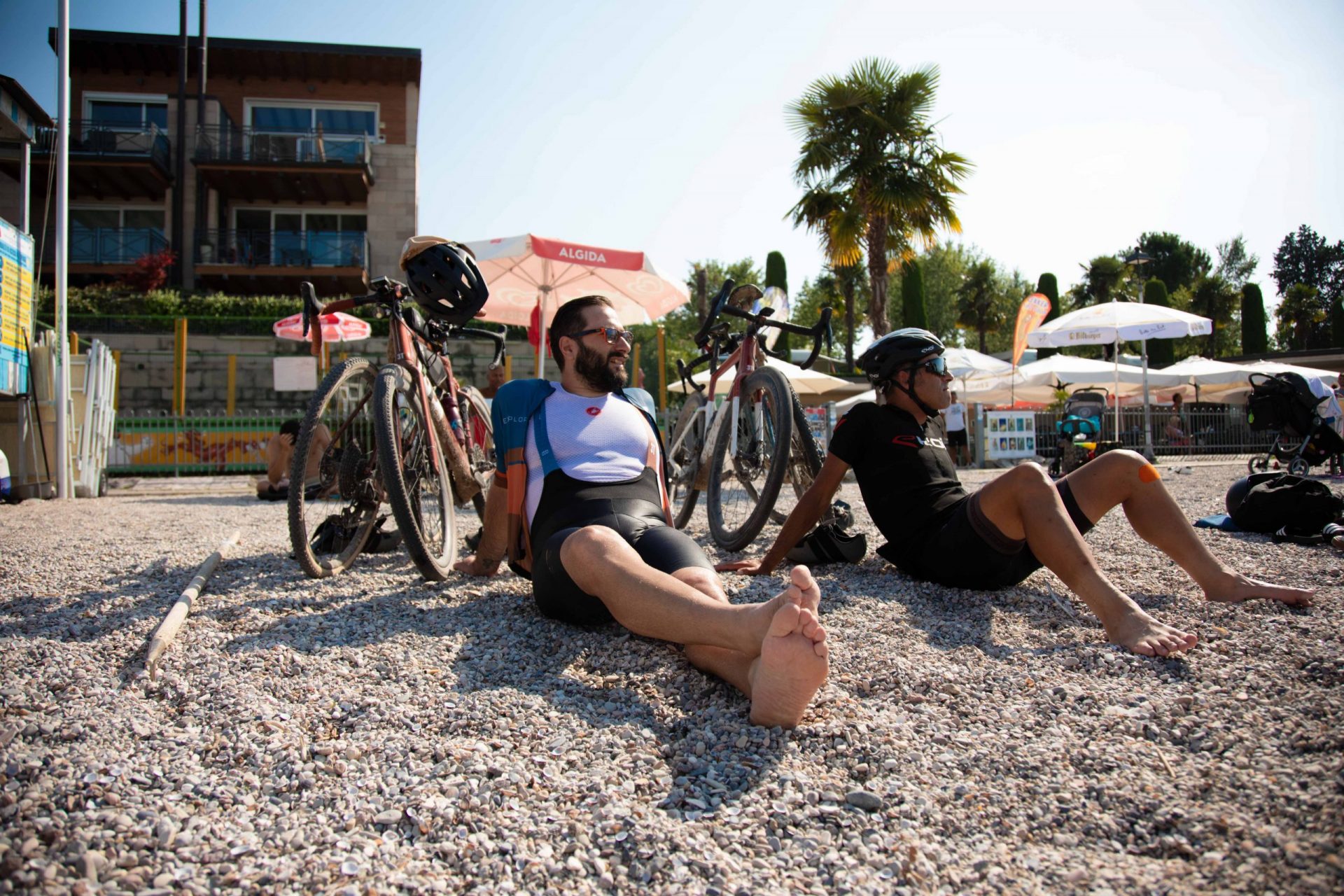 Best Time: All year round! Maybe skip December-February if your toes get numb in the cold, but it is really not that cold anyway.

Gearing: Paolo, who could use the new SRAM Force eTap AXS 2×12 WIDE on his Exploro RaceMax bike was the one with the highest number of options and enjoyed it a lot. Edi, with his 36T Torno chainring paired with the massive 10-50 Eagle cassette could climbs the walls but on this route you hardly need more than a 1:1 gear ratio.

◄ Previous Story City Exploro Maebashi, JP
Next Story ► Jeroboam Series 2020 finally begins in the Dolomites
Cookies help us deliver our services. By using our services, you agree to our use of cookies.Got itLearn more
...