This Toronto gravel bike ride adventure was sent to me by my good friend Nigel Gray. Shortly after Phil White and I founded Cervélo, we met Nigel. In fact, he was Cervélo’s first “employee”, reaming out seat tubes of incorrectly made frames in the shed behind Phil’s house.

This was during the Canadian winter and the shed was unheated. He’d come in every 30min to warm up and then go out again. He also became one of the first and longest-running sponsored athletes for us, and a good friend.

Here’s his Covid-inspired RIMBY (Ride In My Back Yard). Maybe it inspires you for an upcoming adventure, regardless of whether that’s a Toronto gravel bike ride or a Timbuktu trail run.

2020 has definitely not been the year anyone was expecting. With everything turned on its head and races off the calendar for a while, it was time to start looking for different options to stay fit and motivated.

My main goal for 2020 was racing Kona in October after I turn 50 (having qualified in Wisconsin last year), but with that now being delayed a year it was time for something new. Taking a year off is just going to make you slower and left behind by the competition so it’s time to think outside of the box.

For me that means adventure, doing something a bit different and pushing the limits. Our spring weather so far has been crap so I have been riding pretty much exclusively on my gravel bike. Now it was time for a true gravel adventure.

Brandon and I started to look at a way to ride from our homes in Toronto to his chalet at Hidden Valley in Huntsville. But we didn’t want to ride on paved roads, we wanted it to be as much gravel/trail/path as possible, just to get away from cars, into nature and make it more fun, challenging, interesting.

We worked out a route by using google maps/earth and lots of internet searches and found what we hoped was a fun and doable route to Huntsville. After that, it was a matter of waiting for the right day with some reasonable weather. This past Thursday was the day!

We figured out the logistics of nutrition and stops to make sure we could get there and with 2x1L bottles on the bike and a 2L camelback and 35+gels I was ready to go! 3 stop options was all we assumed to find on the way for more water and fuel, but we thought this would be enough.

Since much of the route was unfamiliar, we weren’t really sure of how fast this ride would be. I was thinking it would likely be 12 hours of ride time and 14 hours total so I wanted to have lots of fuel just in case. With an early start (5:30am) to give us lots of daylight to get this done, we were off.

Leaving from my place we headed out the Gatineau Hydro Corridor trail which heads NE out of the city towards the Zoo. This is a great trail, all paved, quiet and beautiful with the sun coming up. Out from the Zoo we climb Beare Mountain (an old dump that’s being turned into a park and a great view overlooking the city) and then started to head out to the gravel roads around Claremont and up the Oak Ridges moraine towards Uxbridge.

There was lots of great gravel in this section and also lots of climbing! From the top of the Moraine on 7th concession you descend down into Uxbridge and then hit an awesome rail trail for 30km up to Cannington and our first stop. From Cannington north it’s still very flat with lots of quiet roads. We got detoured because of some road construction, but the detour route was even better than the planned route so that was great.

The 65km from Cannington to Coopers Falls was quite flat and a mix of pavement and gravel. The weather was perfect now, 22 Celsius and sunny, beautiful blue sky and little to no wind. Even more important, there were very few cars.

Coopers Falls was one of those sections we weren’t sure about. It’s a hiking trail that allows bikes, but on gravel bikes it was as much hike as bike!! But it was worth it, the scenery was incredible and riding the rocks and woods of the Canadian Shield with all the little lakes was spectacular. And given its technical nature a lot of the riding out of the saddle and was actually a bit of a relief.

We got lucky as well; the bugs weren’t bad. They were around but not biting yet so that was awesome as you could be eaten alive in there! Out of Coopers Falls we had our 2nd refuel stop before getting back into some rolling hills again, the next 25km was a rolling mix of gravel and pavement with one tough gravel road where they have paved the hills because they were so steep! It was in this section that I noted I had just passed my slowest 180km time on record, 7hours.

Right around 200km we hit hwy 118, the one busy road on the whole route, but it’s got a nice bike lane and it was a chance to enjoy a bit more speed for a short while before the next really hard section. We headed into Bigwind Provincial Park and Old Wagon Rd. This is basically a non-operational park so there are no facilities or anything here, just a rough gravel road through the park.

It was hard, the road is rocky, loose and sandy and lots of tough uphill’s and downhills, and it took both a lot of energy and focus late in the ride so this was a very good test!! And it was spectacular, you really felt like you were out in the middle of nowhere with no one else around, it was amazing and just what I was looking for from this.

This was a good 15+km section that took well over 45min and a 245 Watt (Normalized Power). It really started to drain the tank after 8 hours of riding. We then headed into Baysville, which local triathletes may know from the Muskoka 70.3 course. We got lucky again and rode into town 5min before the store closed to get our final top up.

The first 20km of those was right down Brunel which is the (paved) bike course from Muskoka 70.3. This section I found tough, being back on the road after so many kilometers on a gravel bike with 47mm tires and 22psi is a lot different than a TT bike!

Just before getting into Huntsville we turned east onto West Browns Road. This is a beautiful paved road to start that then gets hilly and then turns to gravel. Multiple sections of 15-18%, both paved and on dirt, made for one last big challenge. One last chance to empty the tank before it was basically all downhill hill to Hidden Valley. 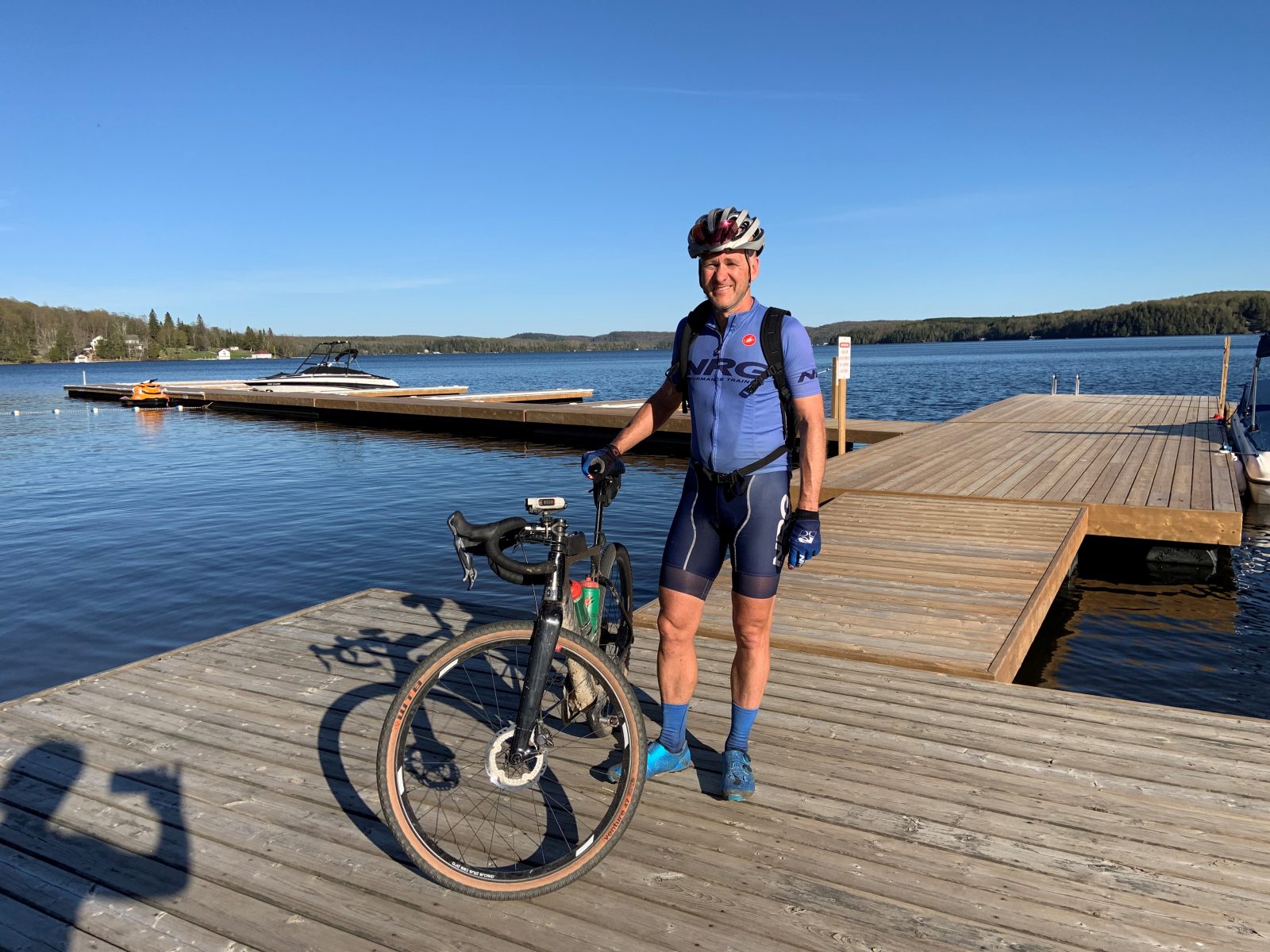 In the end we had been a lot quicker than I had thought. Ride time was 10h35 and total time 12h30. So we got to Huntsville at a good time and Fiona (my sister, Brandon’s wife) had ordered pizza for us. It was waiting for us on the table on the patio; we ate the whole thing before even getting our gear off. That was a huge challenge but spectacularly beautiful and well worth every minute.

We had no mechanical issues at all in this whole ride. That’s both luck and a testament to the quality of gravel bike gear now available. 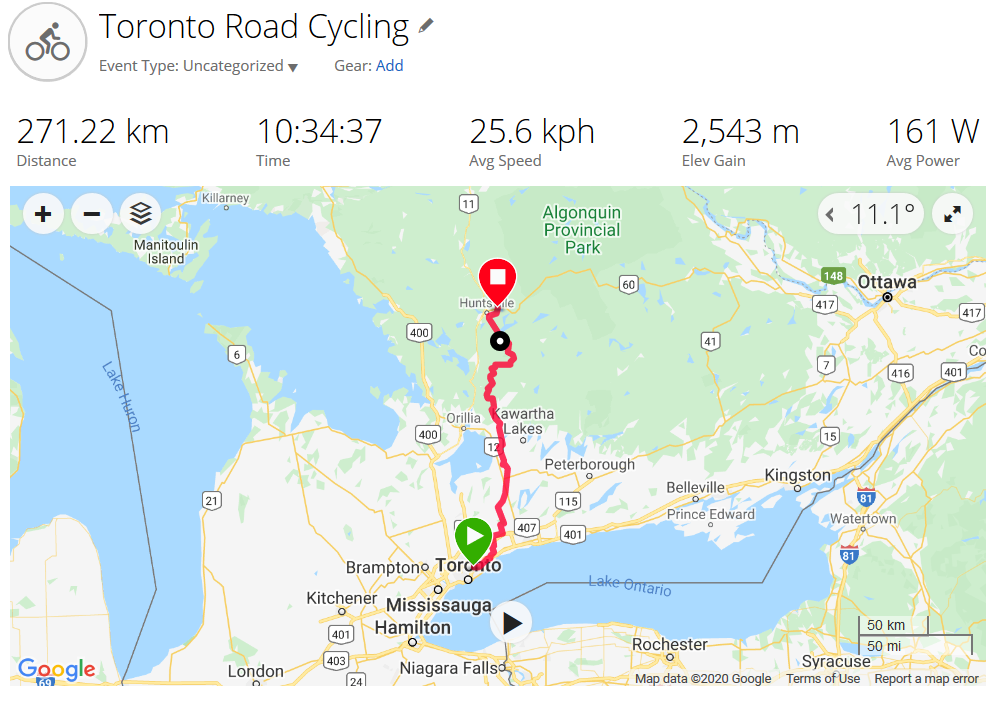