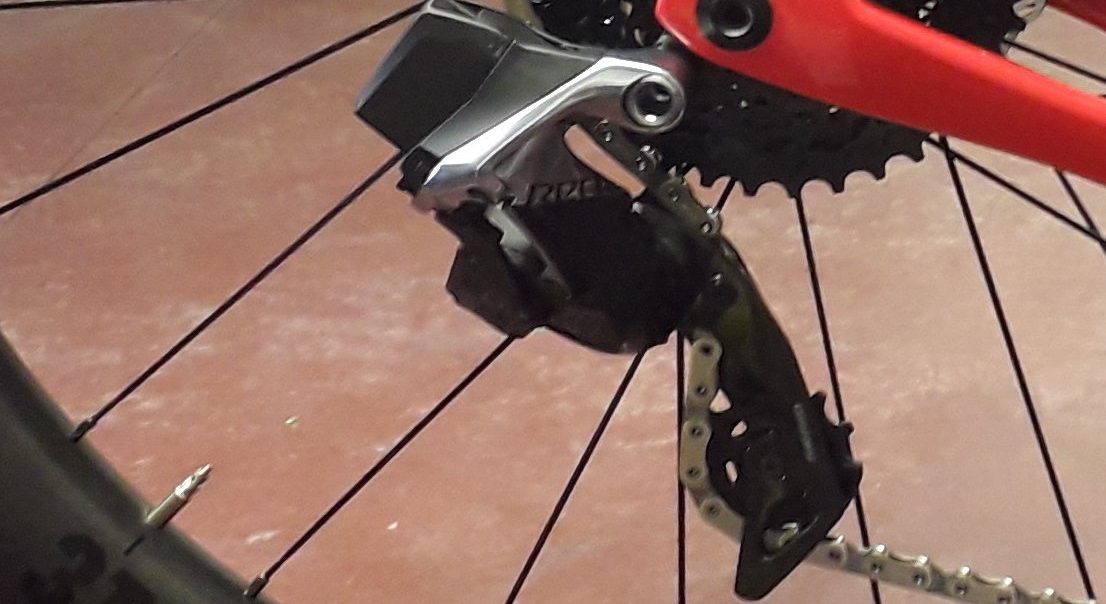 SRAM Force AXS has been expanded with four new components. In the rear, there is now a wider 10-36T cassette with a matching longer cage rear derailleur. In the front, a new crank with 43/30 teeth is matched with a lower-hanging front derailleur. Together these form the SRAM Force AXS WIDE sub-category within SRAM Force AXS.

You can mix these new components with the existing ones, but with some limitations. I wrote about why I would use the rear WIDE components but not the front here.

But what if you already own a 3T bike with AXS parts? You may want/need that wider cassette without spending more for a new Wide rear derailleur.

Or you may want the smaller rings but without getting the wider Q-factor it comes with. Below are solutions we have tried on 3T bikes. They may not work for other brands, they may not work as flawlessly as using Wide parts throughout and they are obviously not what SRAM recommends.

To be clear, SRAM has to make sure something works on EVERY frame. So if they cannot guarantee that, their answer has to be no. I understand and respect that, and their test facilities where they ensure functionality are truly amazing and the level of testing they go into is pretty insane. This is also why they couldn’t just whip up another cassette when I asked them in 2018. I was a little naive for asking it but understood when I saw their testing.

Initially we were not hopeful, since that derailleur does not work well with ROTOR’s 11-36T cassette. The 33T seems a pretty hard stop.

Good news, our initial testing shows the 10-36T cassette can be made to work with the standard non-Wide SRAM Force AXS & Red AXS eTap rear derailleurs that are rated for 33T max in a 1x setup on a 3T Strada and Exploro. In that case, you can simply swap out the cassette for a 10-36T and ride on.

The trick is you need a relatively short chain. We got it to work by not even changing the chain length, just keeping the chain sized for the 10-33T cassette. Obviously it’s a bit limit and the B-screw is at its max but it works fine.

So this is a great option for people who already own a SRAM Force AXS or Red AXS 1x bike and are not in a position to replace the rear derailleur. Just getting the 10-36T cassette is all you need.

Even more amazingly, our initial tests showed this also works in a 2x setup. We used the standard non-Wide AXS derailleurs and the new 10-36T Wide cassette on both a Strada and Exploro.

Again we did not lengthen the chain but kept at the recommended length for a 10-33T cassette. And yes, I know the photo background is messy. We’re extremely busy so we test these setups in-between our regular work.

Hack 3: 43/30 chainrings without the Wide Q-factor

SRAM’s new Force AXS Wide crank uses a 94mm BCD spider so it can fit 43/30T chainrings. That’s great if you want an extremely small low gear of 30×36. It also features a wider chain line, which is good for tire clearance but bad for your Q-factor (how far your feet are spaced aparts laterally).

The good news is that this wider chain line and Q-factor comes from the crank axle, not from the spider. So you can put the 94mm BCD spider on one of the original AXS cranks. That gets you a crank with a narrow Q-factor that can accept the 43/30 rings. Win-win.