The Atlas Mountain Race is a fixed route, unsupported, single-stage cycling race that starts in Marrakesh, crosses the Moroccan Atlas before taking riders through the Anti-Atlas and on to Agadir. The clock does not stop and there are no prizes. The first edition will start on Saturday 15th February and, among the other participants, there will be also three riders with custom painted Exploro bikes: Mattia, Andrea, and Federico. Among them, they decided to be called “Ras El Hanout”, the spicy expedition to #AMR2020.

Ras El Hanout, رأس الحانوت‎, it’s literally translated as “Top of market” and is a mix of fine spices largely used in the North-African and Moroccan cuisine. Many of the spices of Ras El Hanout are not originally from Morocco; a hint about the rich cultural and commercial exchanges that this open region hosts throughout its history. It is a deeply Moroccan spice mix, embracing its tasteful components from all over the World. Such as the Atlas Mountain Race with their participants. 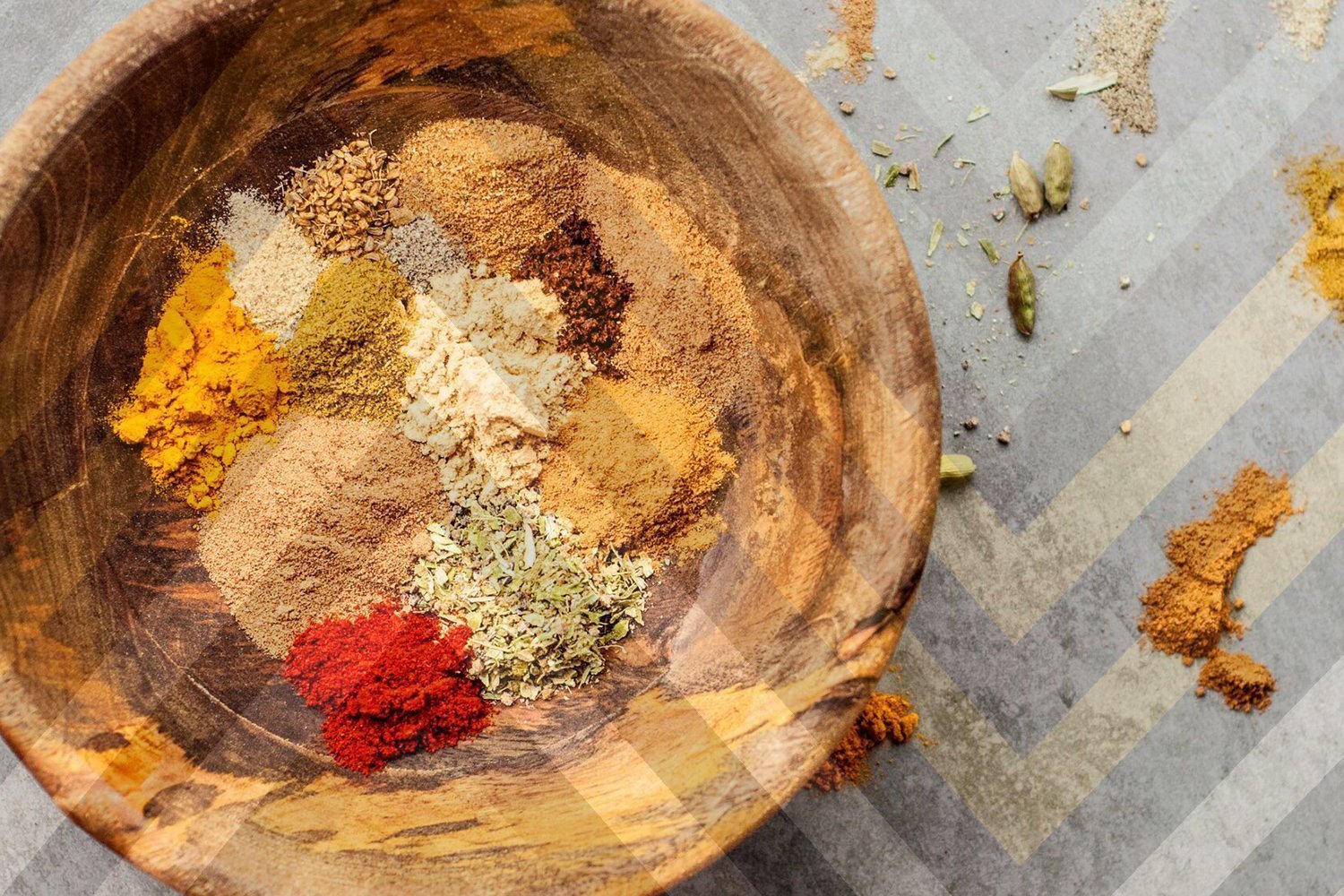 The “Ras El Hanout” expedition members fell in love with this concept and with the colorful spice stands in the Souks and to frame our story around it. Each of them chose a spice of the mix to represent. Each with his personality, experience and attitude to add taste to our expedition. Mattia, Turmeric, will race Solo. Andrea, Ginger, will race as a Pair alongside Federico, Cumin. 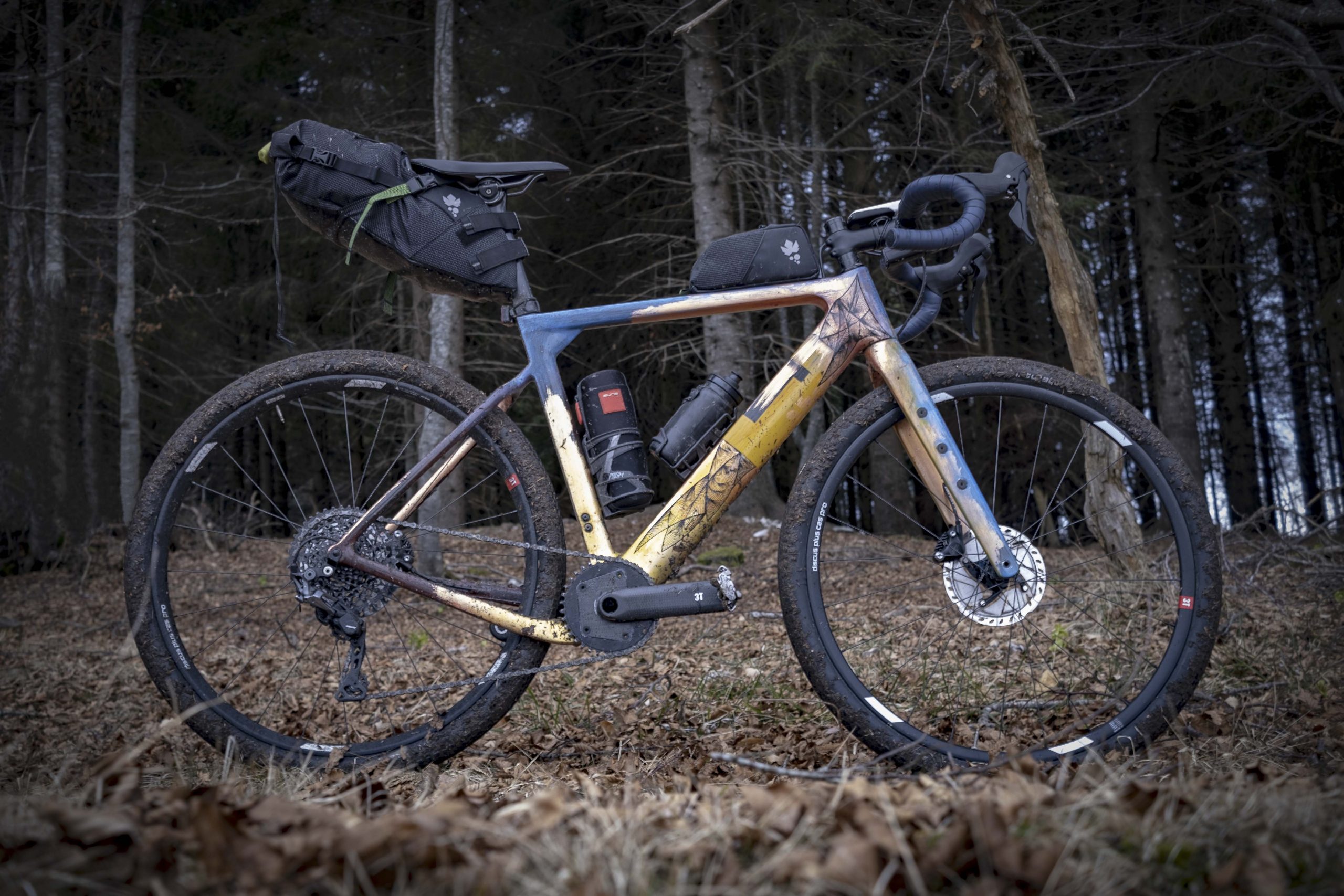 Making a rough estimate, one will need between 30,000 and 40,000 calories to cover the 1145 km of the Atlas Mountain Racecourse and get to Sidi Rabat. It’s the kind of energy a person usually eats and drinks in fifteen or twenty days on a normal diet.

Mattia will only have eight days to get to the sea and it’s therefore pretty clear the energy equation is definitely not even.

Giorgio Dalla Costa knows exactly that finding energies in a long race is one of the main issues. 49 years old, Giorgio is an Italian artist active in painting, sculpting and many other disciplines. He is a cyclist too and gets part in ultra-cycling events for a hobby. Last year, for example, he completed the Italy divide.

Lately, he was able to combine art and cycling. He thinks painting frames is a work that lands in between painting and sculpting and it’s somehow a paradigm shift for art itself. Paintings and sculptures are standing in an exhibition or a museum and they have the ability to make a person travel away with his mind. In the case of a painted bike, it’s the owner himself who gets the artwork with him and makes it travel.

To paint a bike frame – Giorgio says – the first need is to create a connection between the artist and the owner of the bike. It’s necessary for the artist to almost become that person because it’s a process aimed to answer his questions and give visibility to something that was invisible before. 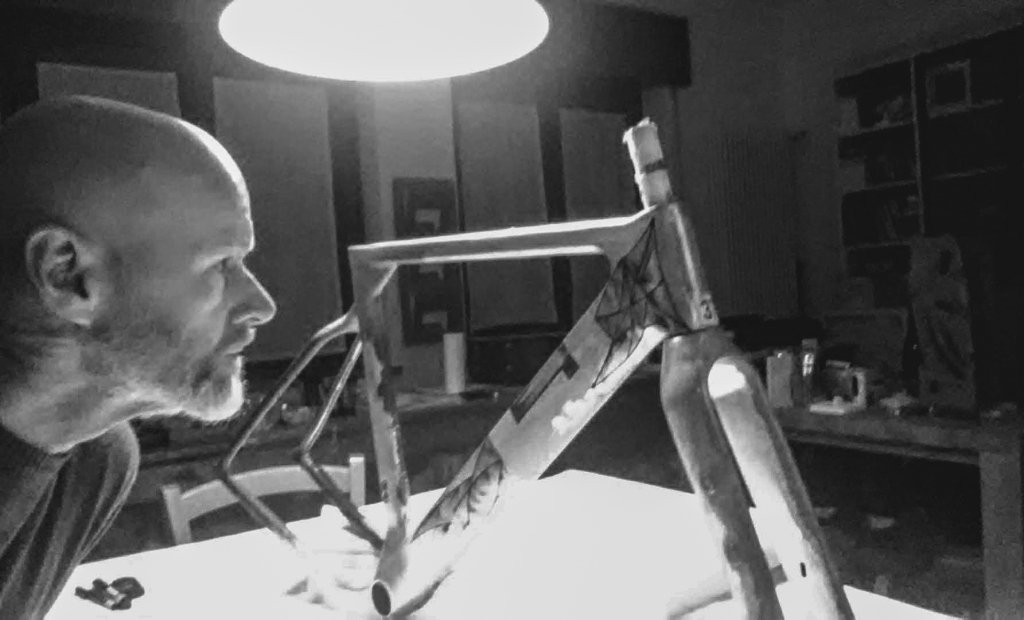 Giorgio had complete freedom in making Mattia’s frame. The only fixed point was the use of the turmeric yellow on the 3T logo band on the down tube. That color – and the glossy finishing – were applied by the Italian master of custom frames Tony Spray.

Even though Giorgio says that the painting time is relative, it took about ten days to the artwork to be born and be named: “Lifeblood. Bringing along your roots to get new energy in continuous regeneration. Bright energy”.

Let’s hear directly from Giorgio about this piece of art.

I saw Mattia as a person with very strong roots. He travels a lot, but family and relationships are the key elements he gets energy from. He’s got a winning mindset, but he is a very positive and cheerful person too, in my opinion.

His character was the inspiration, the Turmeric theme my guideline for the chromatic effects. The colors you will find on the frame are inspired by the different forms and evolution of this spice. From the typical intense yellow of the powder to the acid one of its status when cooked. But there are also some violet and pink, linked to the turmeric flower nuances. 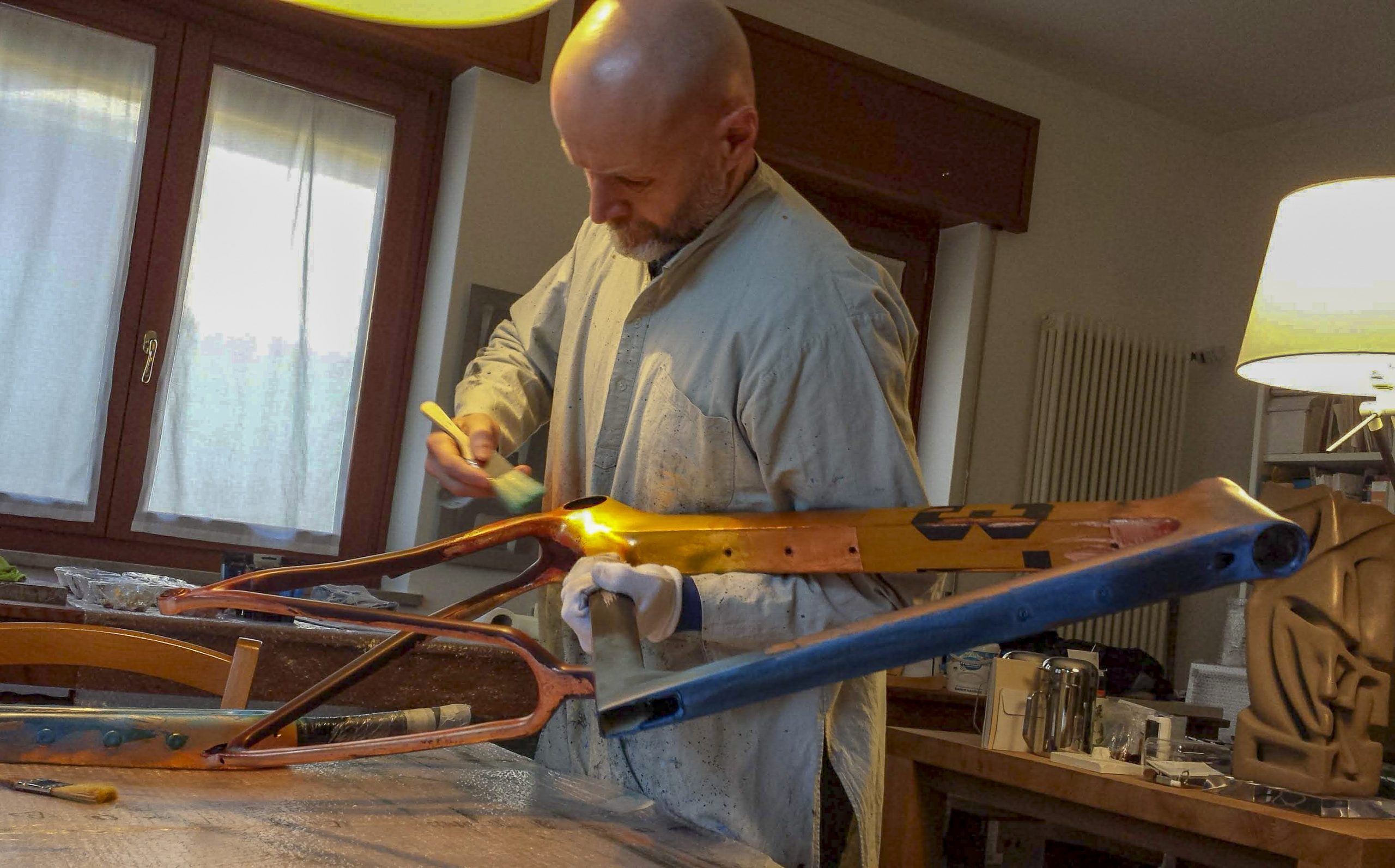 I tried then to image the frame in the landscapes that Mattia will cross during Atlas Mountain Race, trying to get to colors and shades that would perfectly match the context and Mattia himself at the same time. 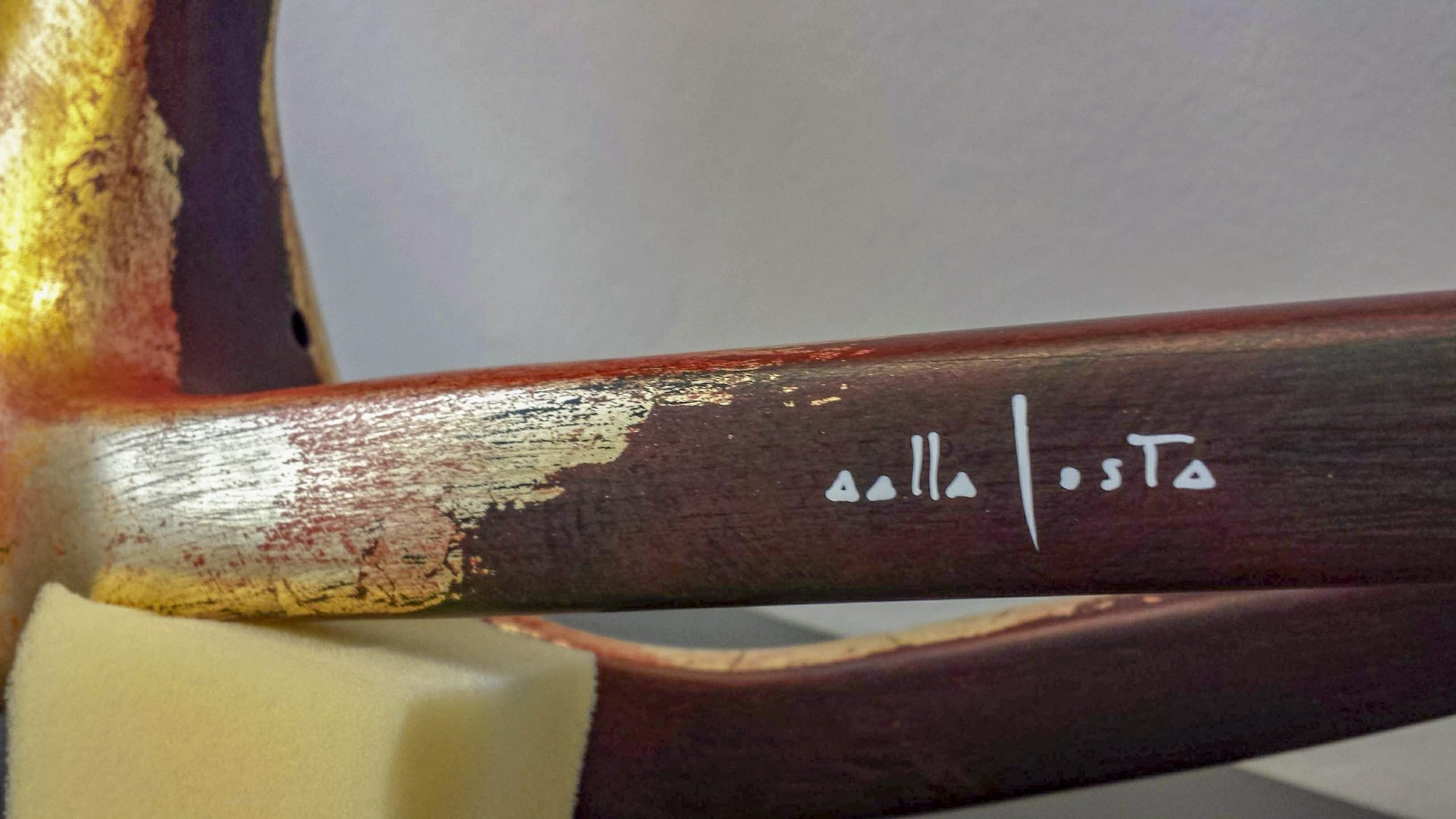 I used the action painting technique to paint the frame. It’s the same I use for big pictures. Colors are applied with big and fast movements. I put the material to take it out eventually. My colors are not thick. It’s a spiritual kind of painting.

The black lines on the down tube are like cuts in the space. I name them Thoughts fibers. They are my way to represent feelings. 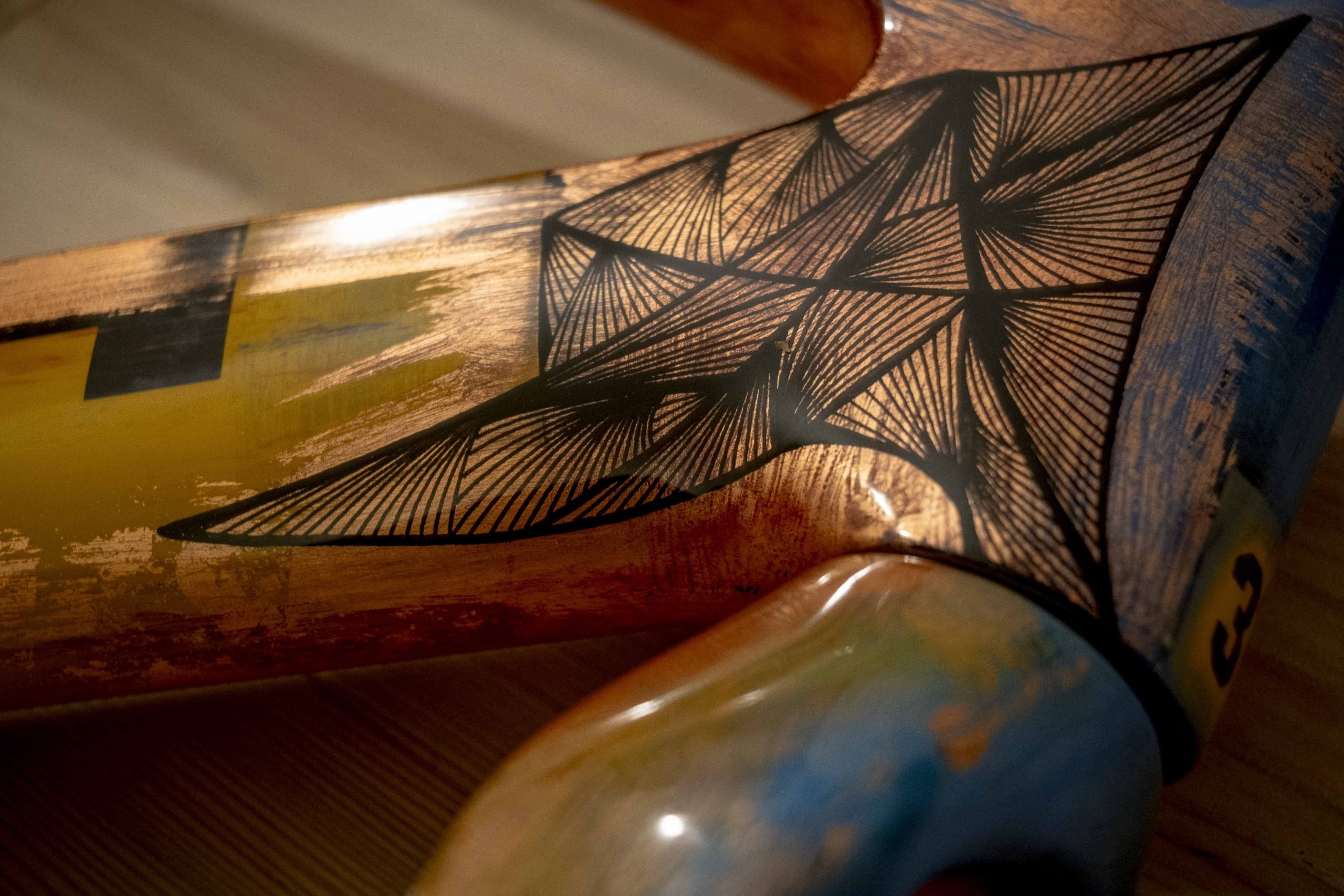 Painting a frame is not easy at all. It’s a process in which a lot of doubts emerge, but the best and most liberating thing is the moment you show the frame to the owner. The first sight is crucial. You can clearly tell when you got it right because you see the light in his eyes. You understand your job is done and now it’s the owner’s turn. 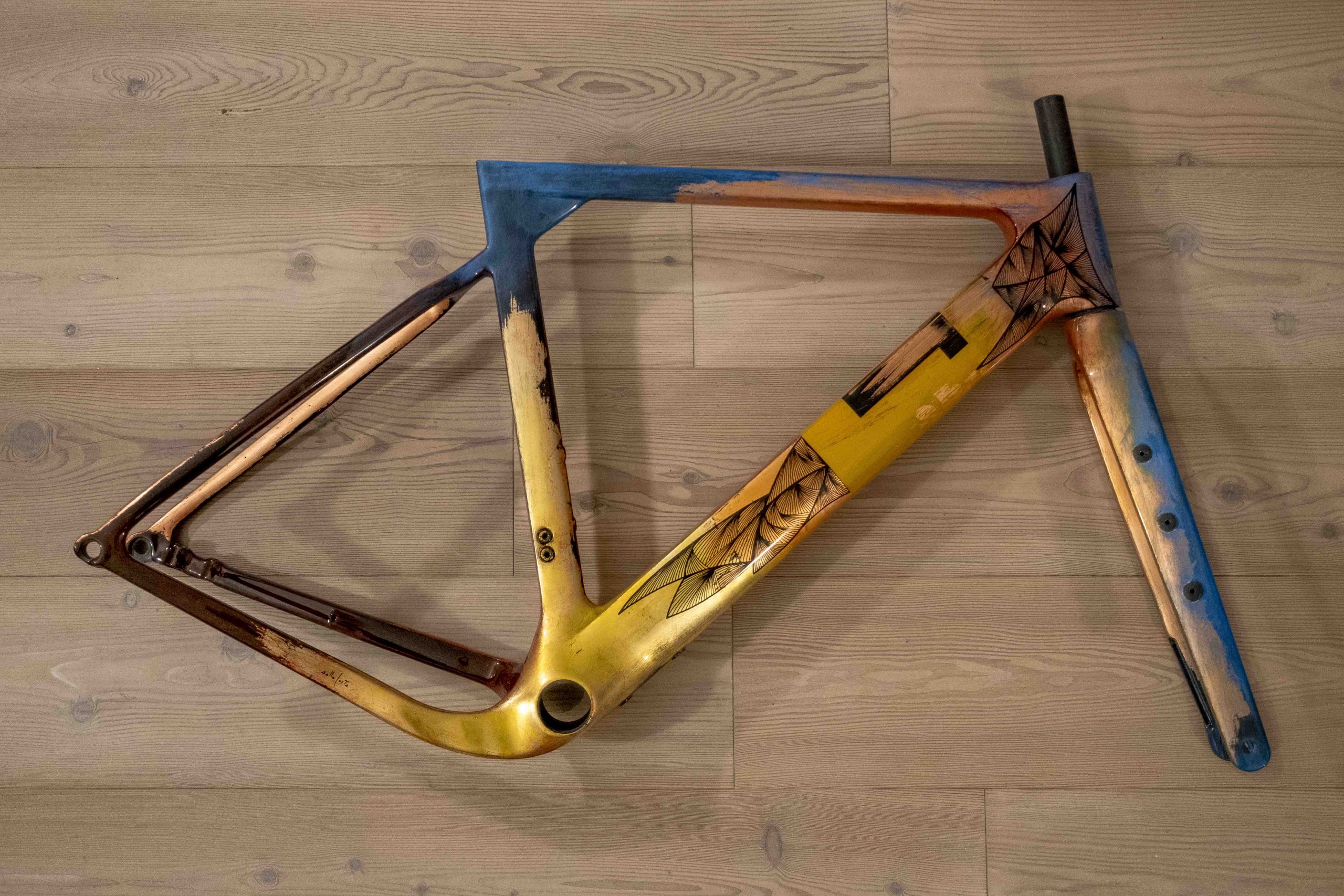 I had this feeling with Mattia. I’ve seen some energy created the very moment I handed the frame out to him. The same energy he will need in the mountains in Morocco. Lifeblood will help him find it. 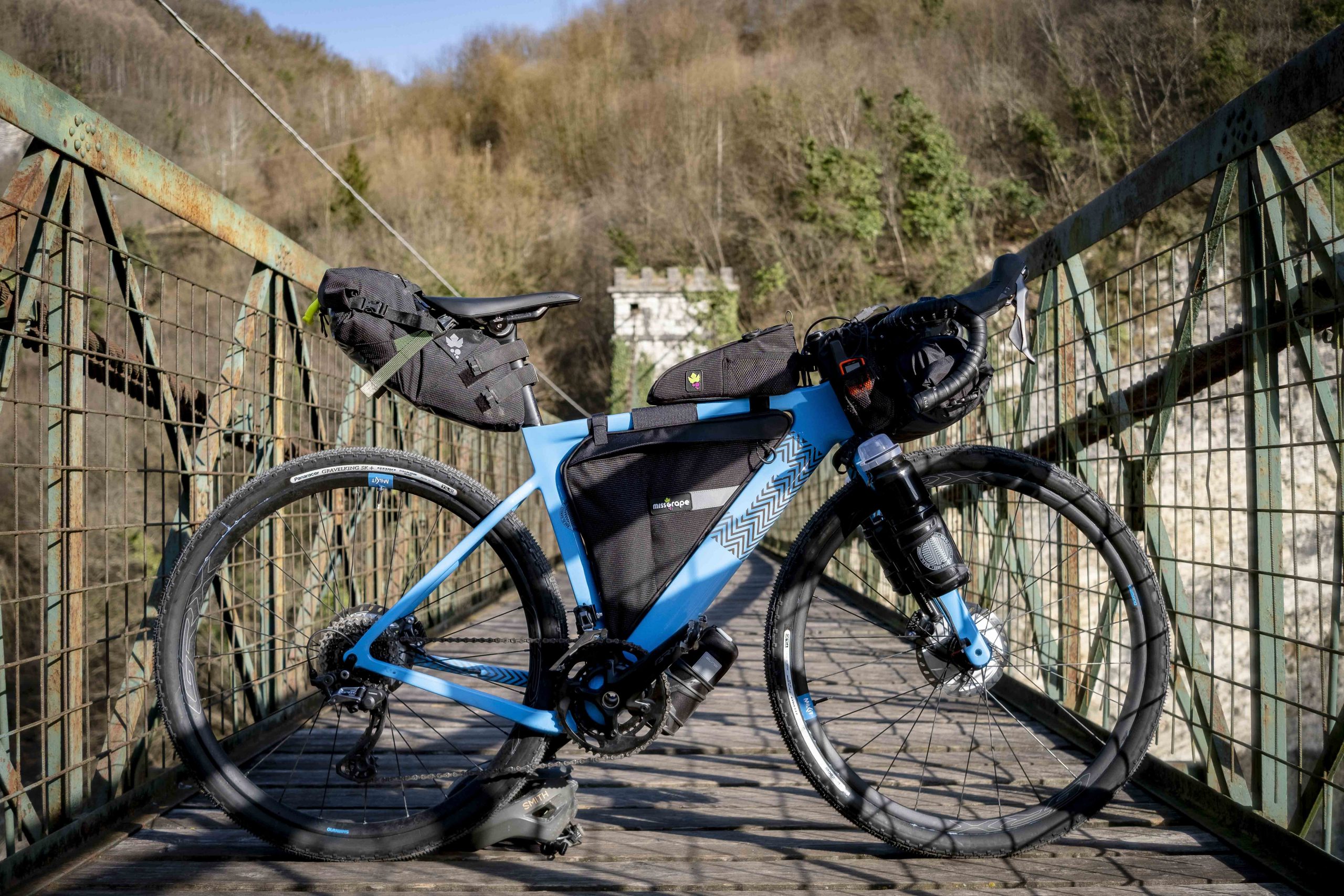 It’s Federico himself explaining to me how this design was born.
When we split to design our bikes after approving our custom jerseys, I quite panicked. I’m no designer, and the idea to decide how to make mine was terrifying. What if I fuck up the first opportunity I have to customize a bike frame and I end up ruining a beautiful and noble shape like a 3T Exploro? 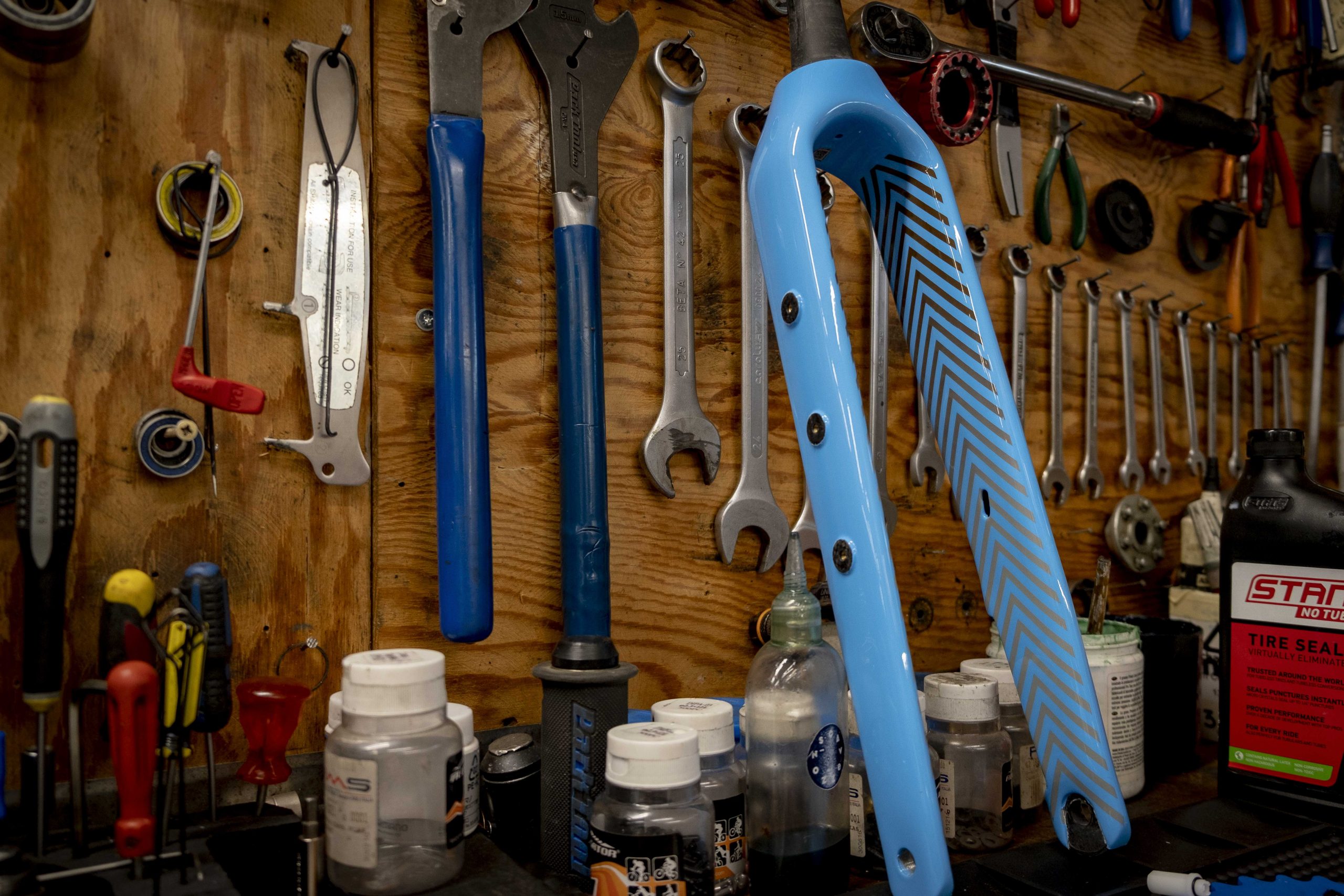 After some riding and thinking, I realized it was the case to go back to Mies Van Der Rohe. Less is more. Keep it simple. Why over complicate things? Having a chance to get creative doesn’t mean you need to exaggerate and make it too loud or you will end up regretting it. It’s pretty much like distance cycling. Having the energy to spare doesn’t mean you need to push as hard as you can immediately or you will end up regretting it. In the background, when I’ll look down to the top tube during Atlas Mountain Race, this bike will function as some sort of reminder.

I like coherence, I like things working well one together with the other. And I like balance. I figured the bike would then need somehow to match and complete the kit and the logo of our expedition. The following was pretty simple.

First, I decided to use the Moroccan blue we used for the details of the jerseys as a base of the frame. Details followed, made with the two Cumin brown nuances of my kit. 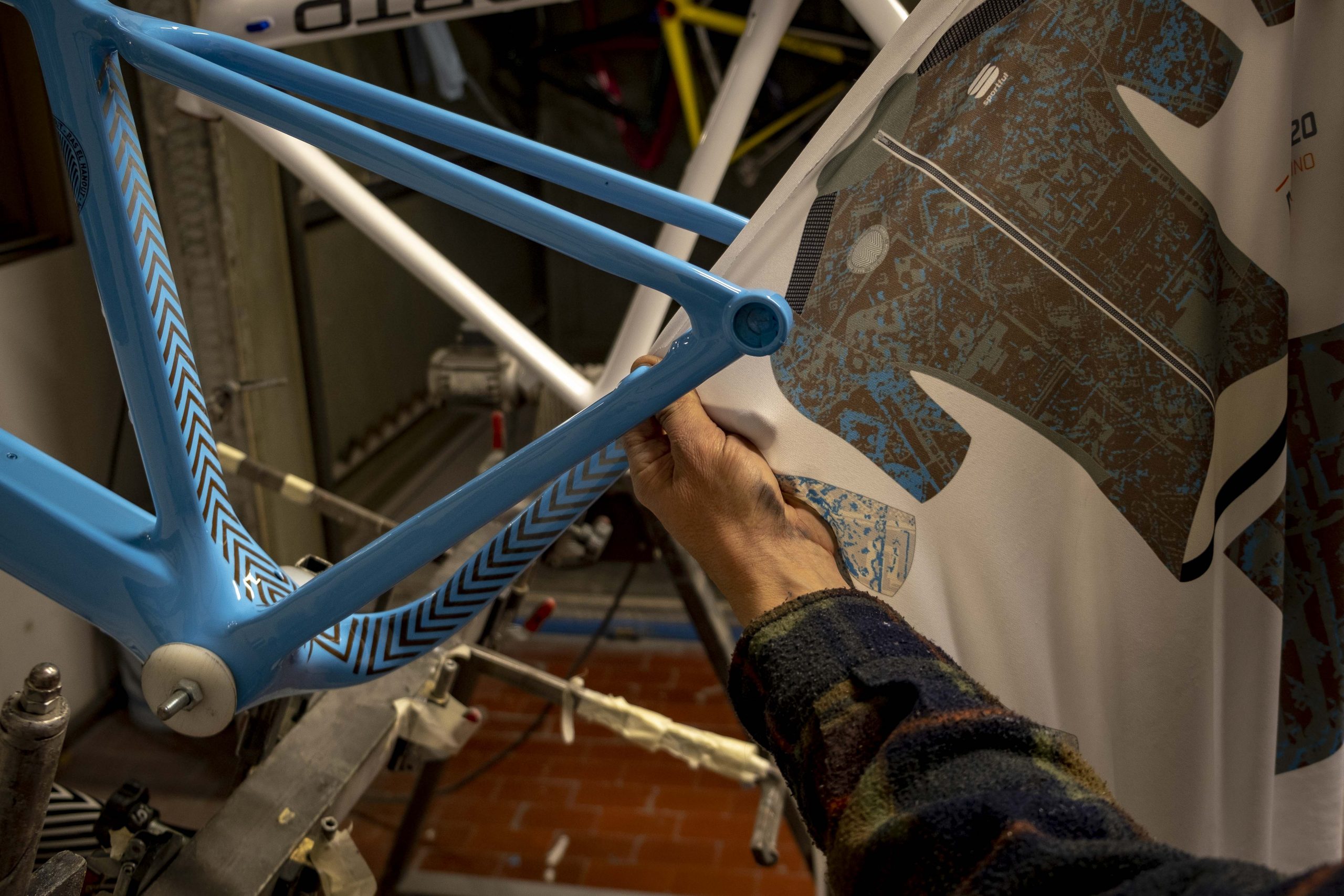 Details design was then inspired by our logo. It’s a geometric triangle pattern, inspired by mountain peaks and the spices piling up in the Moroccan Souks. The down tube 3T logo, the internal of the fork and the chainstay were enough to apply it.

That was the idea, I asked then Andrea for a little help in putting it onto paper and trusted Tony to refine the patterns the best way possible to match the 3T Exploro shapes and get to a nice result. Also shading the two brown nuances was Tony’s idea. I like trusting who knows better and let them do their job. It always pays off.

When Tony showed me the frame with just the base color I thought – oh my God, that’s too blue! It’s like the Smurfs bike. But he asked me to trust him again and the result is simply stunning. 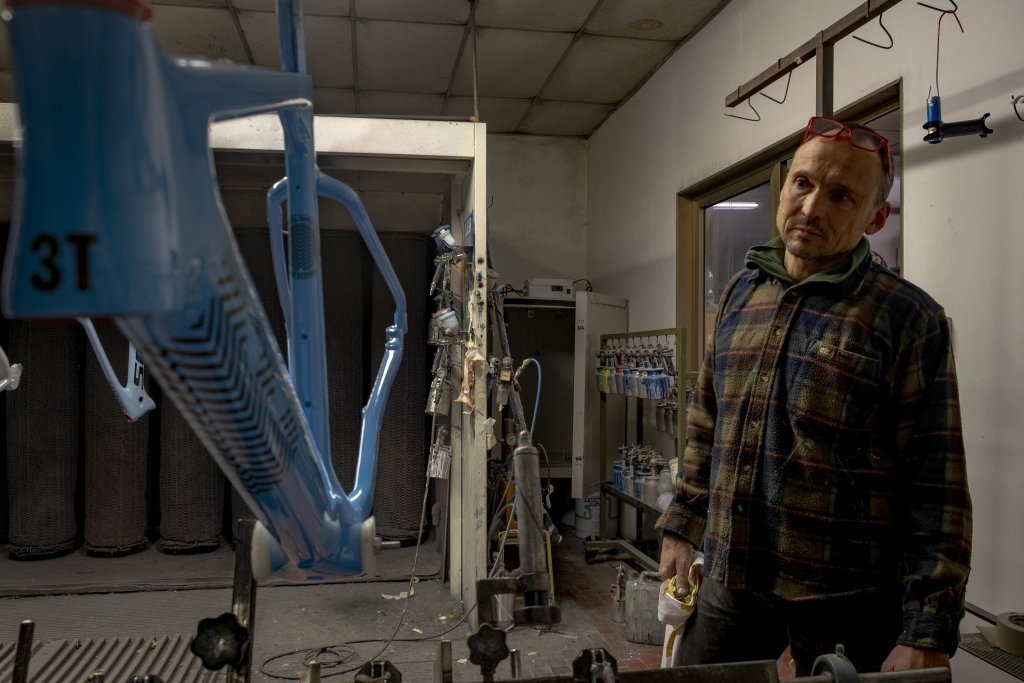 I love how classy, soft but somehow strong this bike design is. She has her own character. You can’t mess with her, but she is elegant and sexy, modern and a bit retro.

At this point, as for any bike I own, I would give her a name matching her character. But I decided to wait. I want fate to find the right one for her. The first girl I’ll meet in Marrakesh the day before the race matching this temper, that’s will be her name. 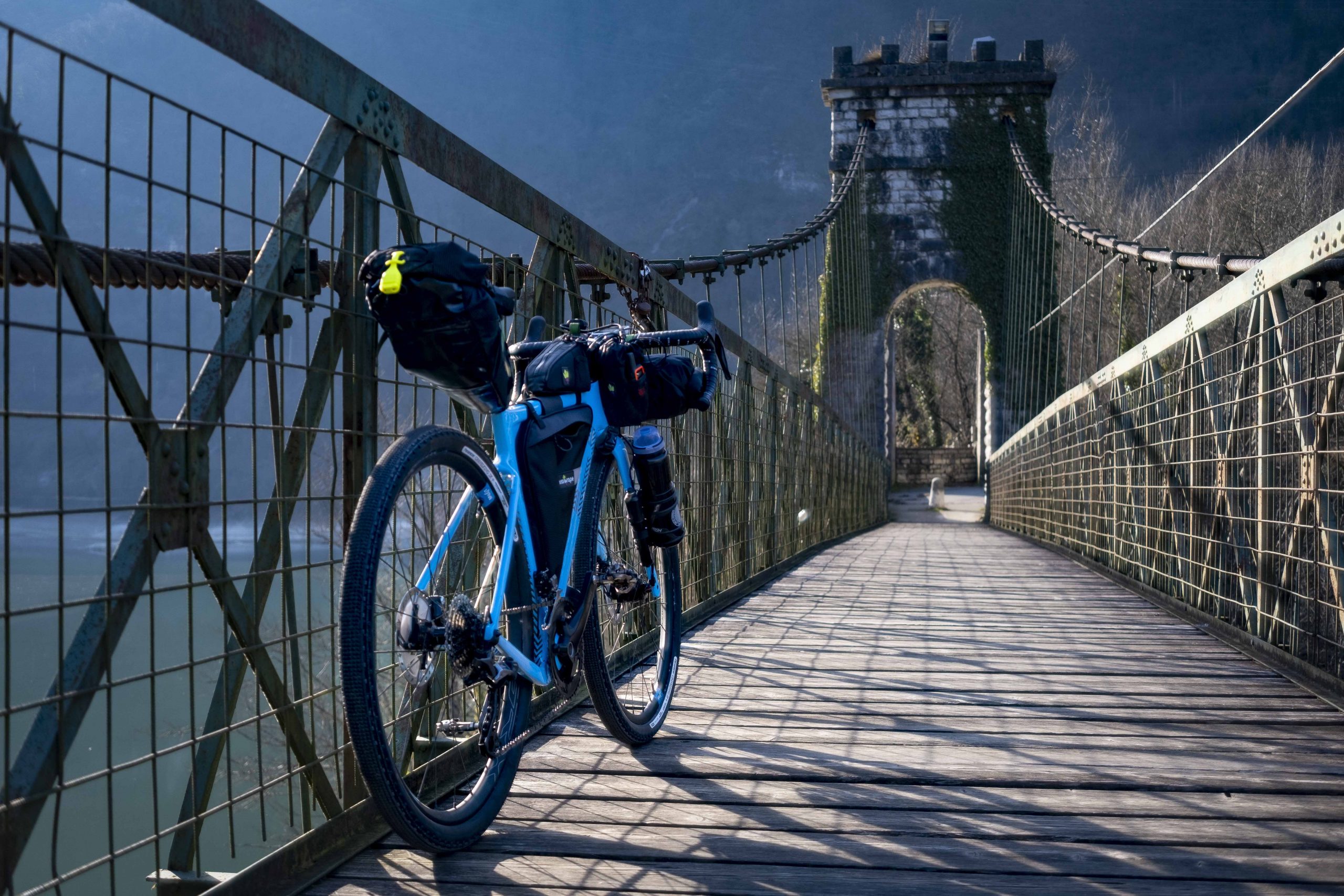 It’s going to be Valentine’s day. I’m already in love with the bike, I just can’t wait to call her by name and line up the day after for our 1150km journey! 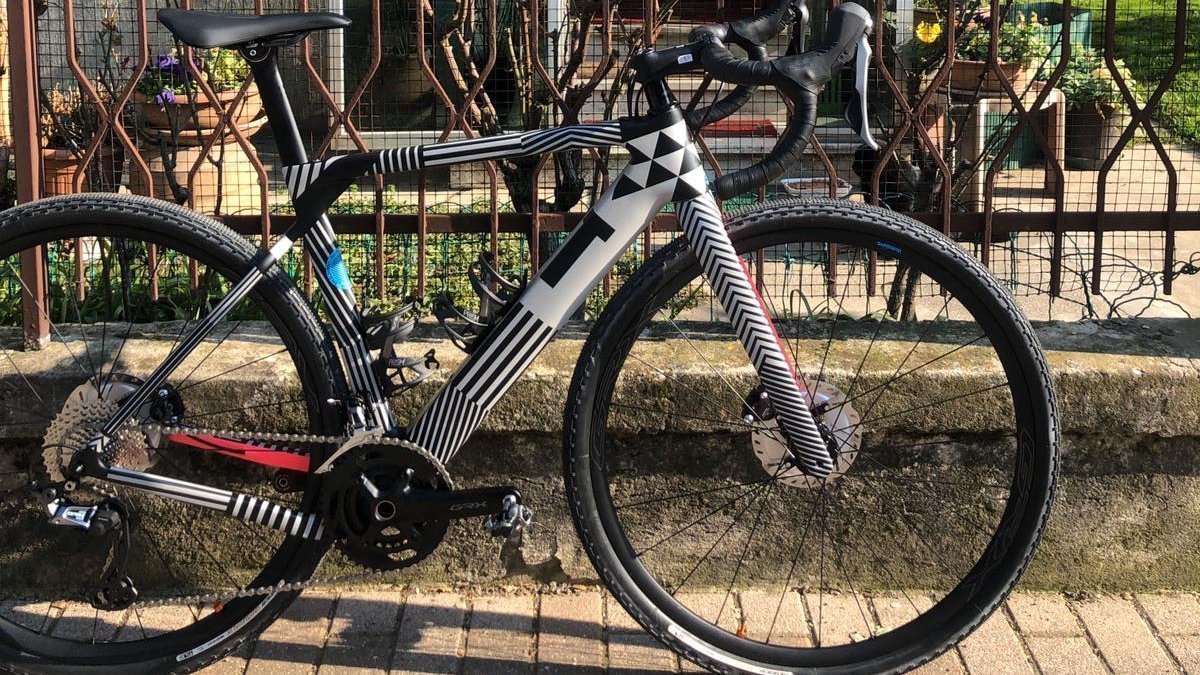 And again, it’s Andrea himself explaining how this design was born.

I visited Morocco the first time When I was 22 and as a young architecture student I have been shocked by architecture and art. Avoiding figurative and using geometry and mathematics to express the beauty of the world. Dreaming

In Islamic culture, the patterns are believed to be the bridge to the spiritual realm, the instrument to purify the mind and the soul. Something like the mandala in Shintoism or zen gardens for Buddhists..

Interesting is also the evolution in western culture and how artist as Escher played this with this pattern creating impossible vision of reality or during WWI cubist artist at the royal college of Art in London distorted this patterns creating beautiful dazzle camouflage for warships or again post-modern designers lead by Ettore Sottsass played to use it as a tool to disrupt modernism. 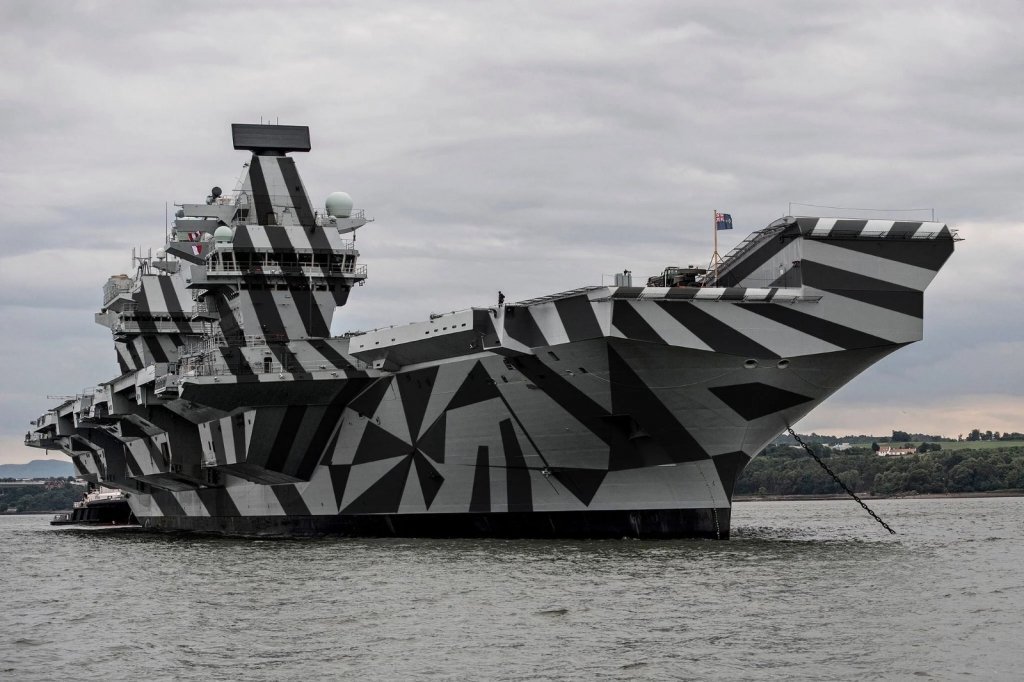 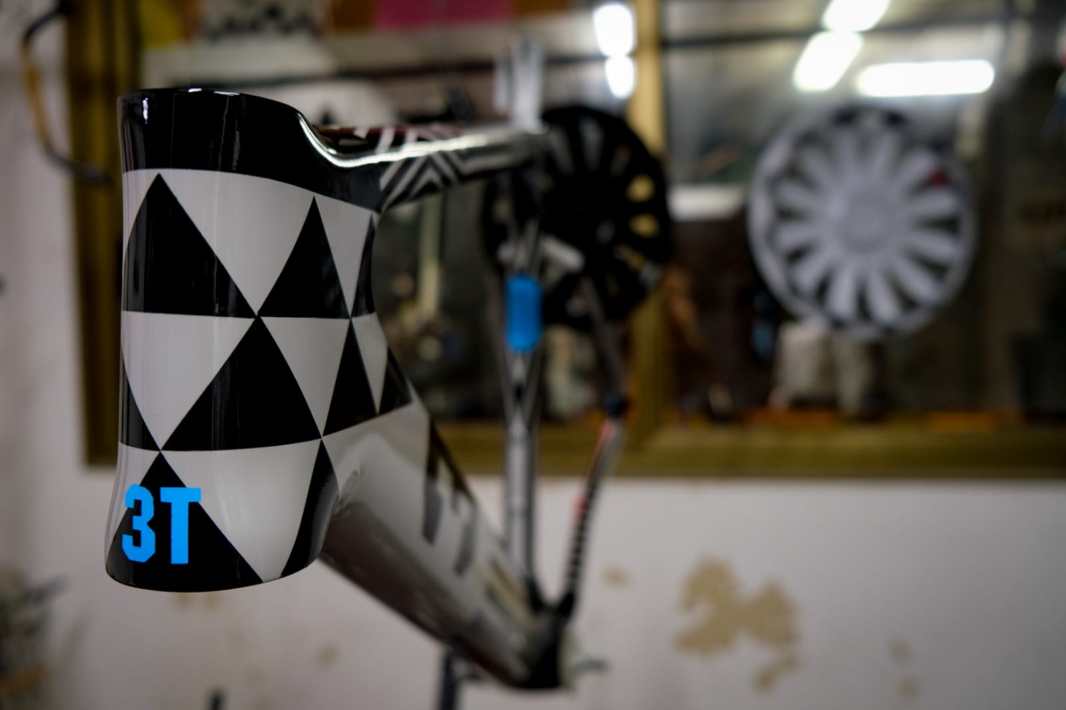 When I was studying the graphic of the bike for this adventure, which as European, represents the exploration of a different side of the world, I tried to converge the geometrical classical Islamic representations and the playful approach of postmodernism culture. On a bike frame. 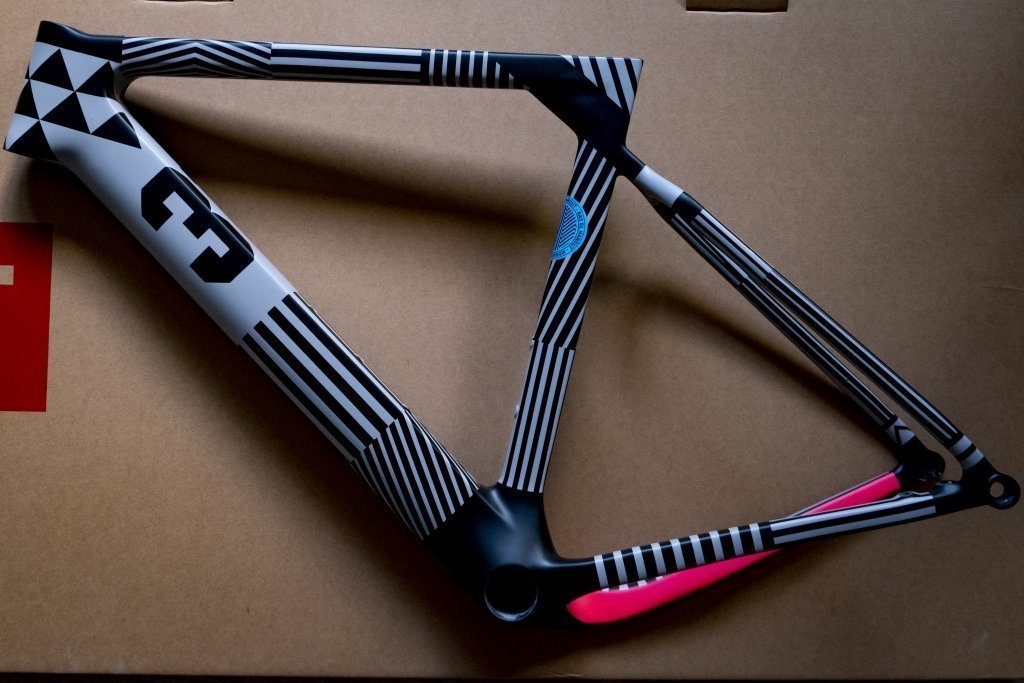 The outcome is an optical crazy mess that I believe represents quite well what I am expecting from this race. I love the result and I a sincere thanks goes to Tony spray which handles it! (not easy to mask all that lines!!!)

You can follow Mattia, Andrea, and Federico on the official AMR2020 tracking page here or go directly to their profile to spot them in the dot crowd. Mattia here, Fede and Andrea on their own pages but you should always see them riding together as a pair.

More info about them on raselhanout.cc

◄ Previous Story My-XPDTN: From Munich to the source of the Isar
Next Story ► WORLDWIDE 3T EVENTS AT YOUR DOORSTEP – MARCH
...