Our XPDTN3 trips are (usually tough) mini expeditions that fit in 3 days. They are meant to inspire everybody to go out and ride. Their stories (as well as expeditions that don’t fit into the 3-day timeframe) can be found in MY-XPDTN. 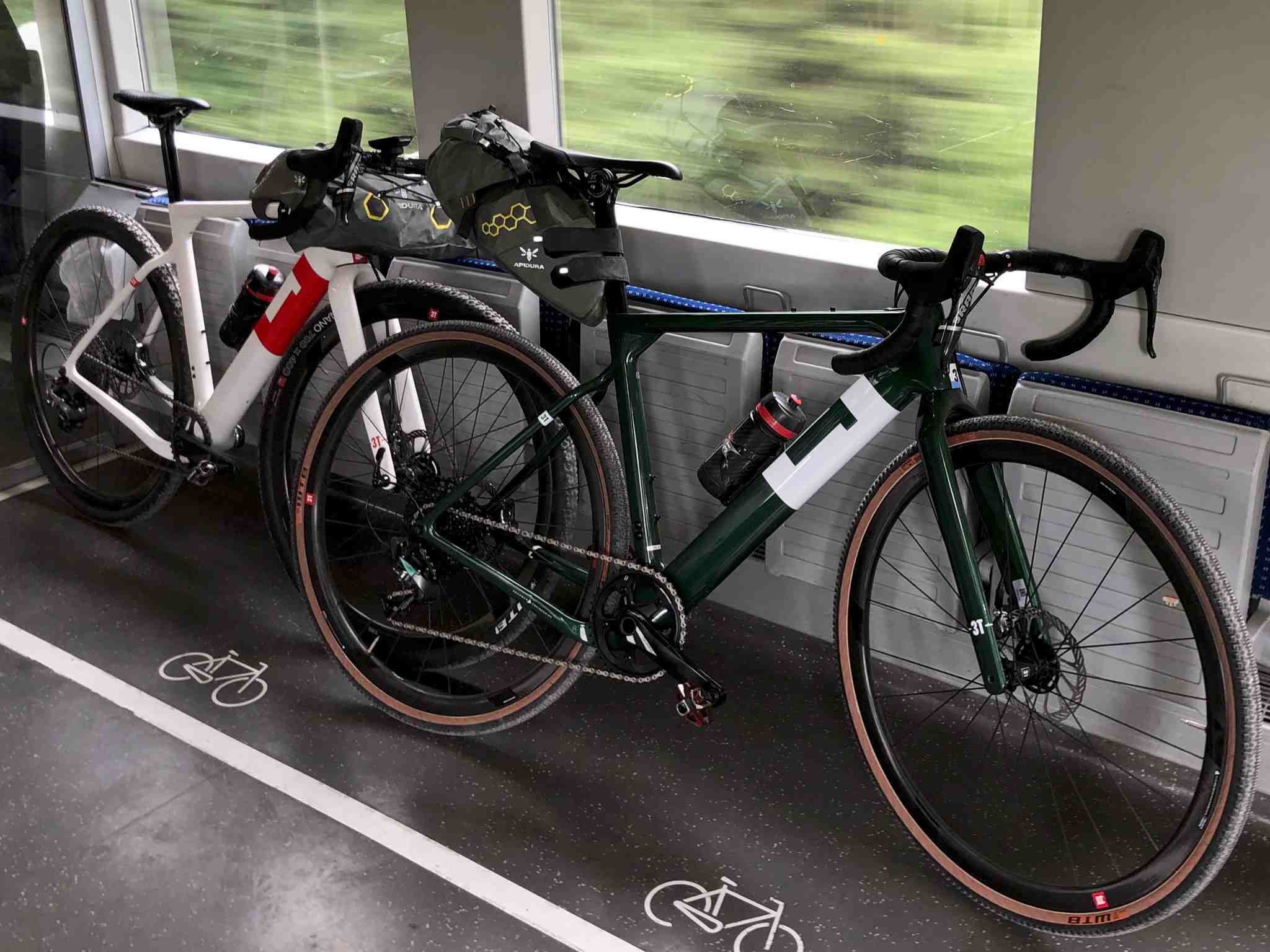 The city is buzzing – it’s a Saturday morning, and we head straight for the Fischbrunnen, probably Munich’s best-known meeting point at the corner of the Marienplatz. From there, it’s a short walk over to the Viktualienmarkt, a large fresh fruit market centered around the traditional Maypole, with plenty of breakfast and lunch spots to choose from. 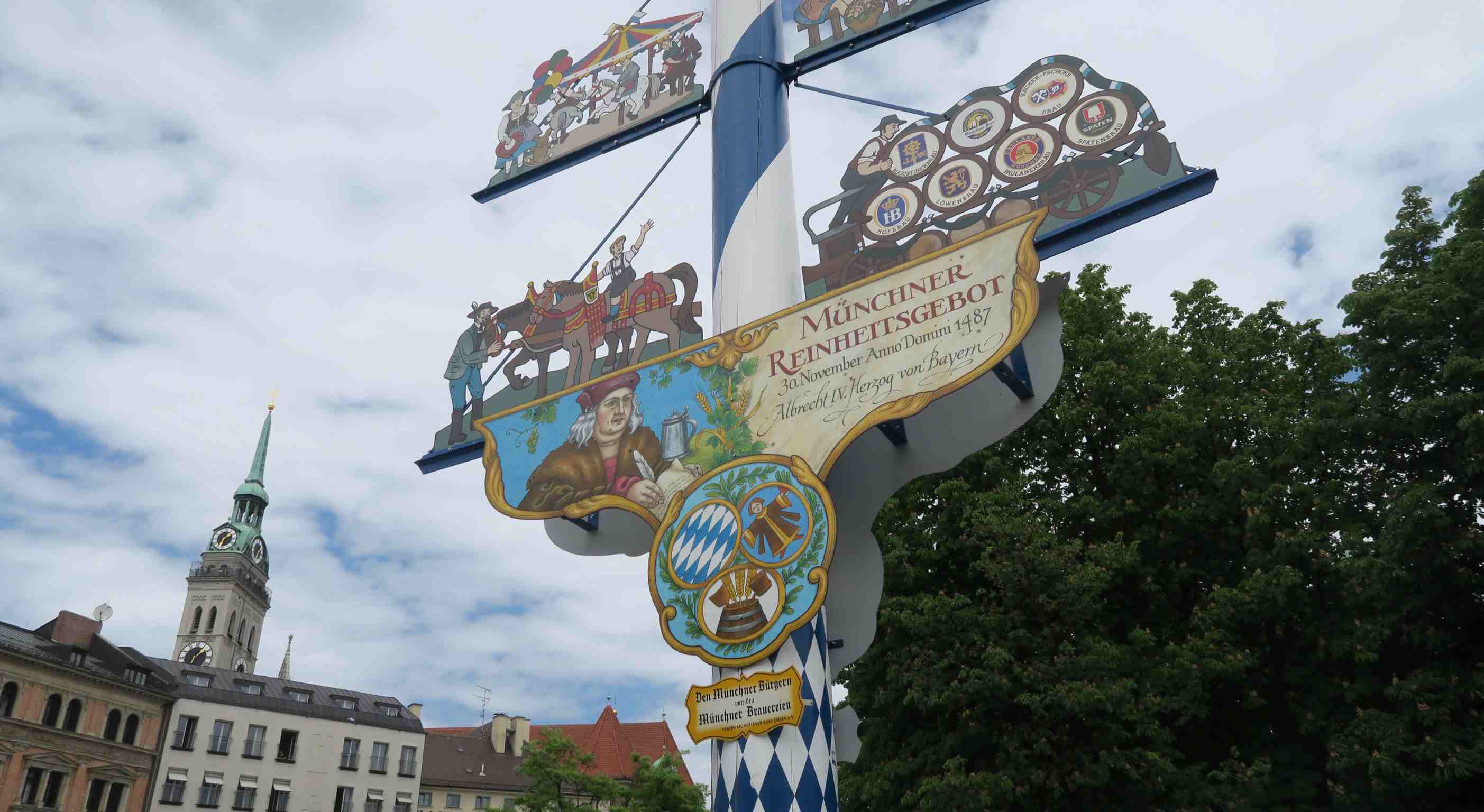 The maypole in the center of the Viktualienmarkt, honoring the “Münchner Reinheitsgebot”, which dates back to 1487 when Albert IV, Duke of Munich made it illegal to use any other ingredients than barely, hops and water to brew beer.

When in Rome…urr.. Munich… do as the locals… no need to wait for lunchtime – the Germans even have a word for having a late morning beer – “Frühschoppen”. 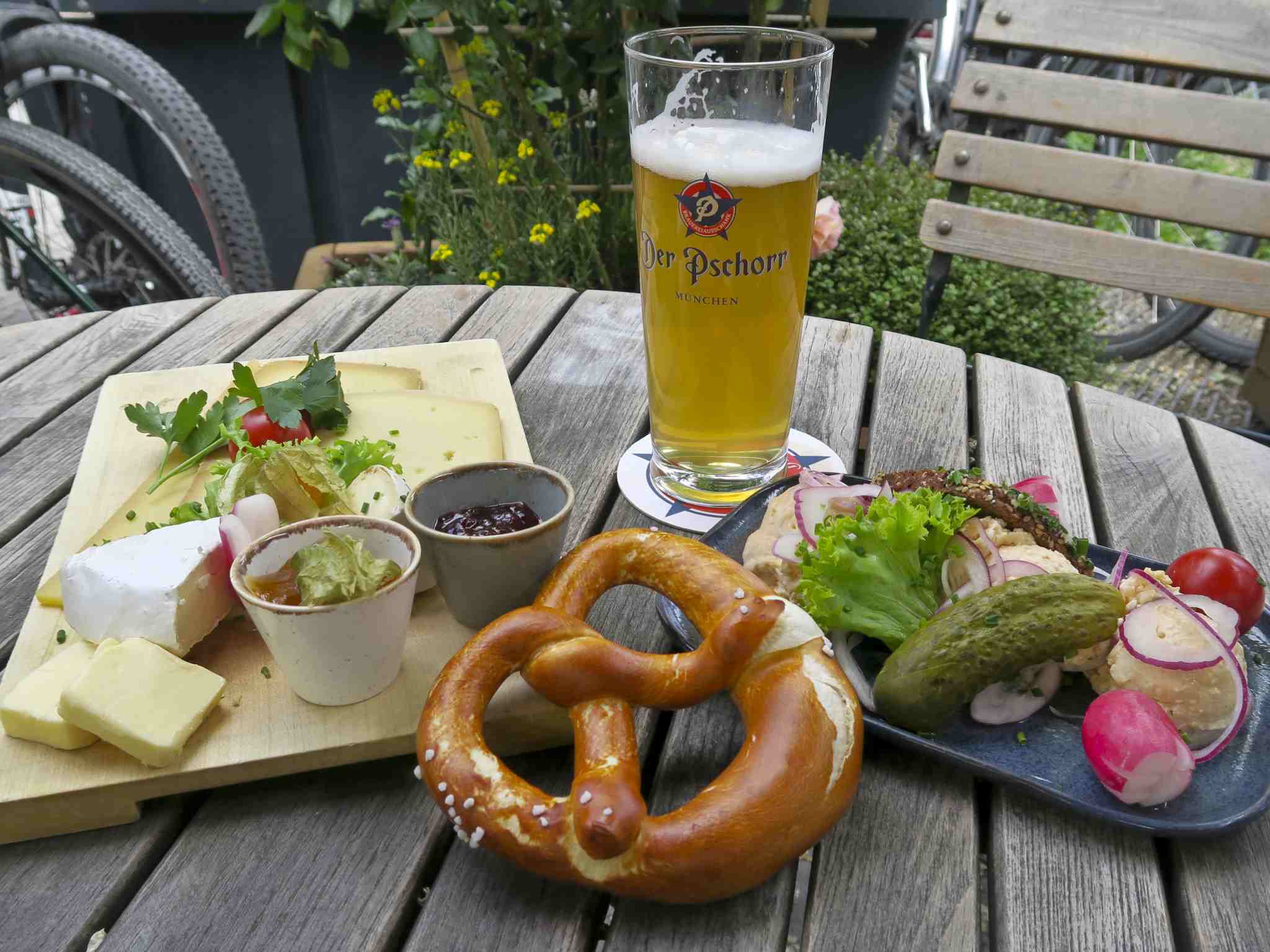 All carb’ed up, we set off. The Isar flows right through downtown Munich. With the first rays of the warming spring sun out, the river banks are busy with sunbathers and people having BBQs. I wonder just how medium-rare those white bodies will be this evening. Only the brave ones are daring a dip in the icy water. 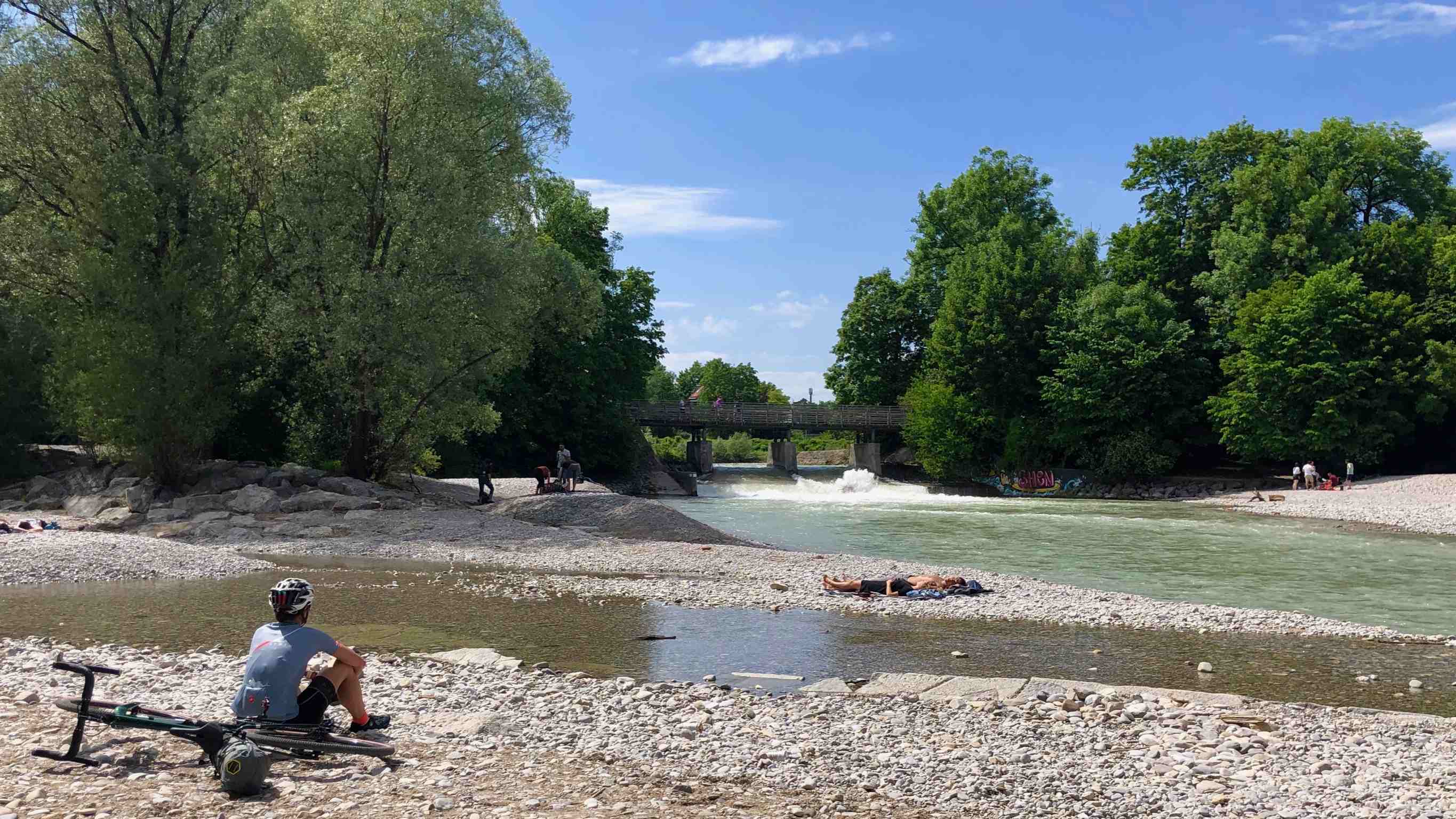 On the shores of the Isar in the center of Munich

The dedicated cycling path alongside the river requires some concentration to navigate, while it is wide and smooth, it is also busy with riders of all levels and aspirations – from the toddler trying to stay upright to the wannabe Strava record holder; commuter bikes, e-bikes, road bikes – anything goes. Parallel to the main path are the Isar Trails – a network of mountain bike single tracks that make for fun deviations, best enjoyed in dry conditions. 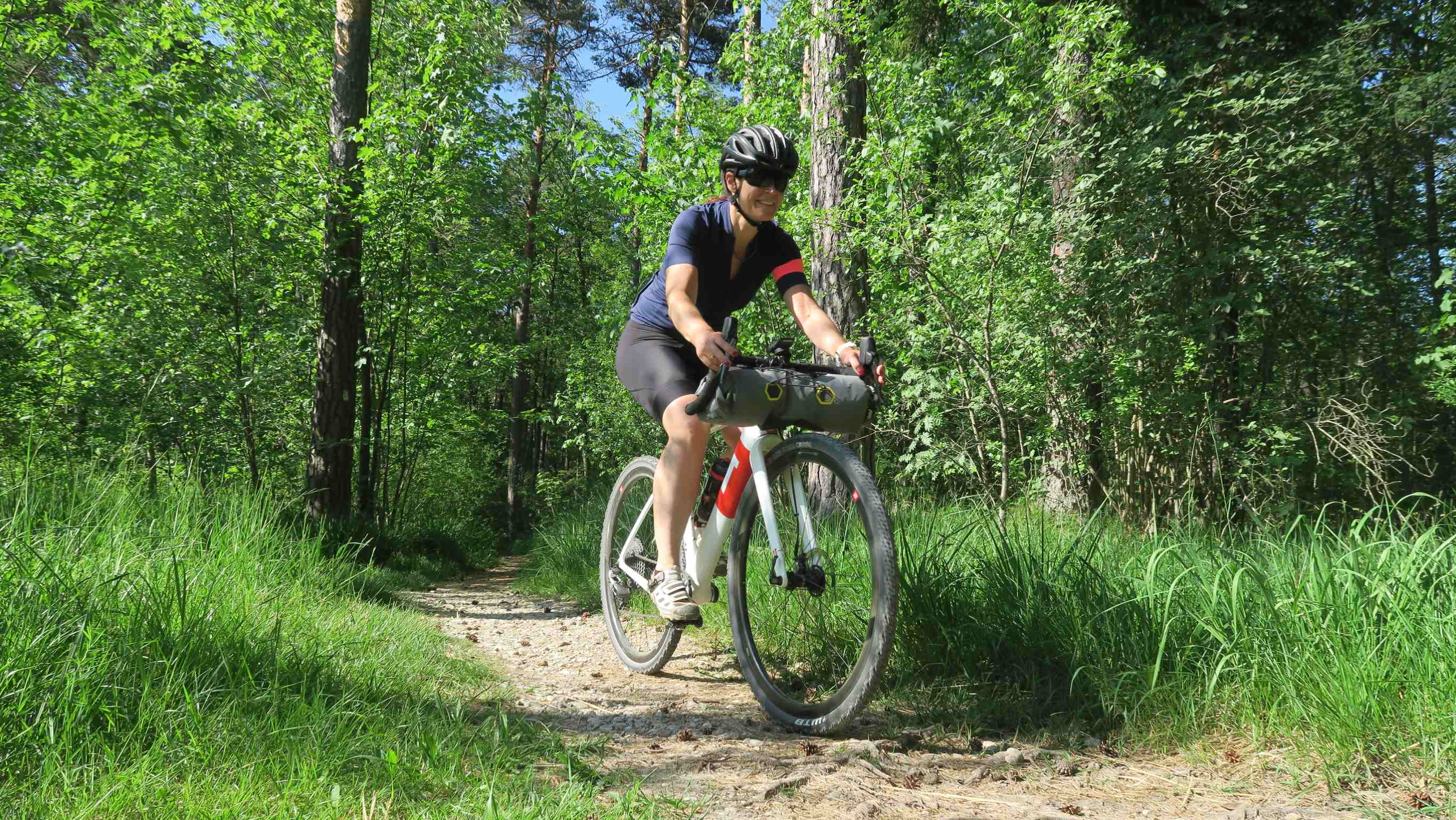 We are astounded just how quickly and car free we exit one of Europe’s major metropoles!

The route is largely flat. From source tomouth (joining the Danube) the Isar looses 850m over 285km, three quarters of which on its way to Munich at around the half way mark. Therefore most of the elevation gain will only come closer to the source in the Karwendel mountains. 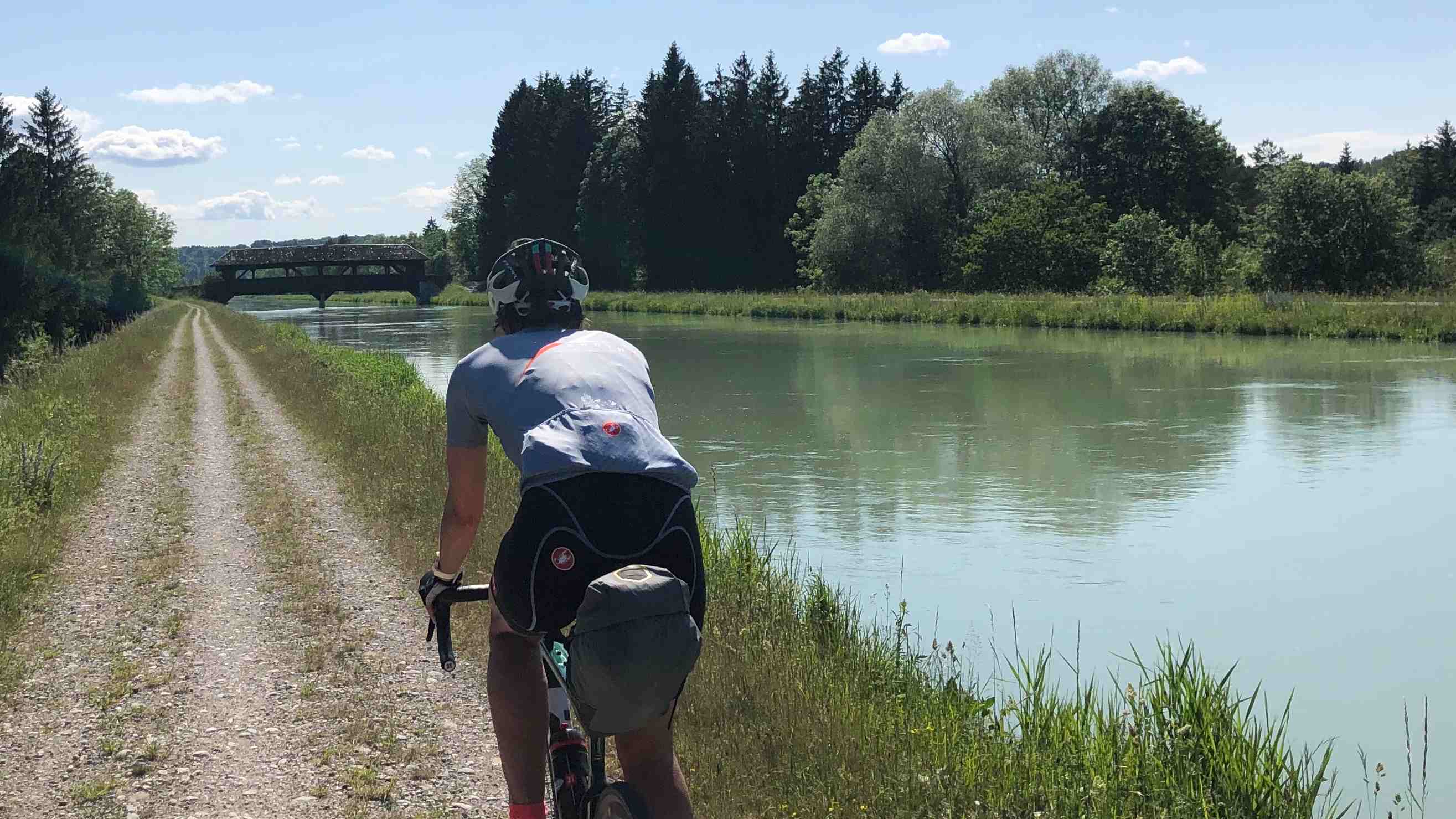 What the Sirensare in Greek mythology, beer gardens are to us – luring unassuming cyclist onto the shores. And so we find ourselves refuelling on delicious home-made cake andSchorle (shandy) on more than just one occasion. 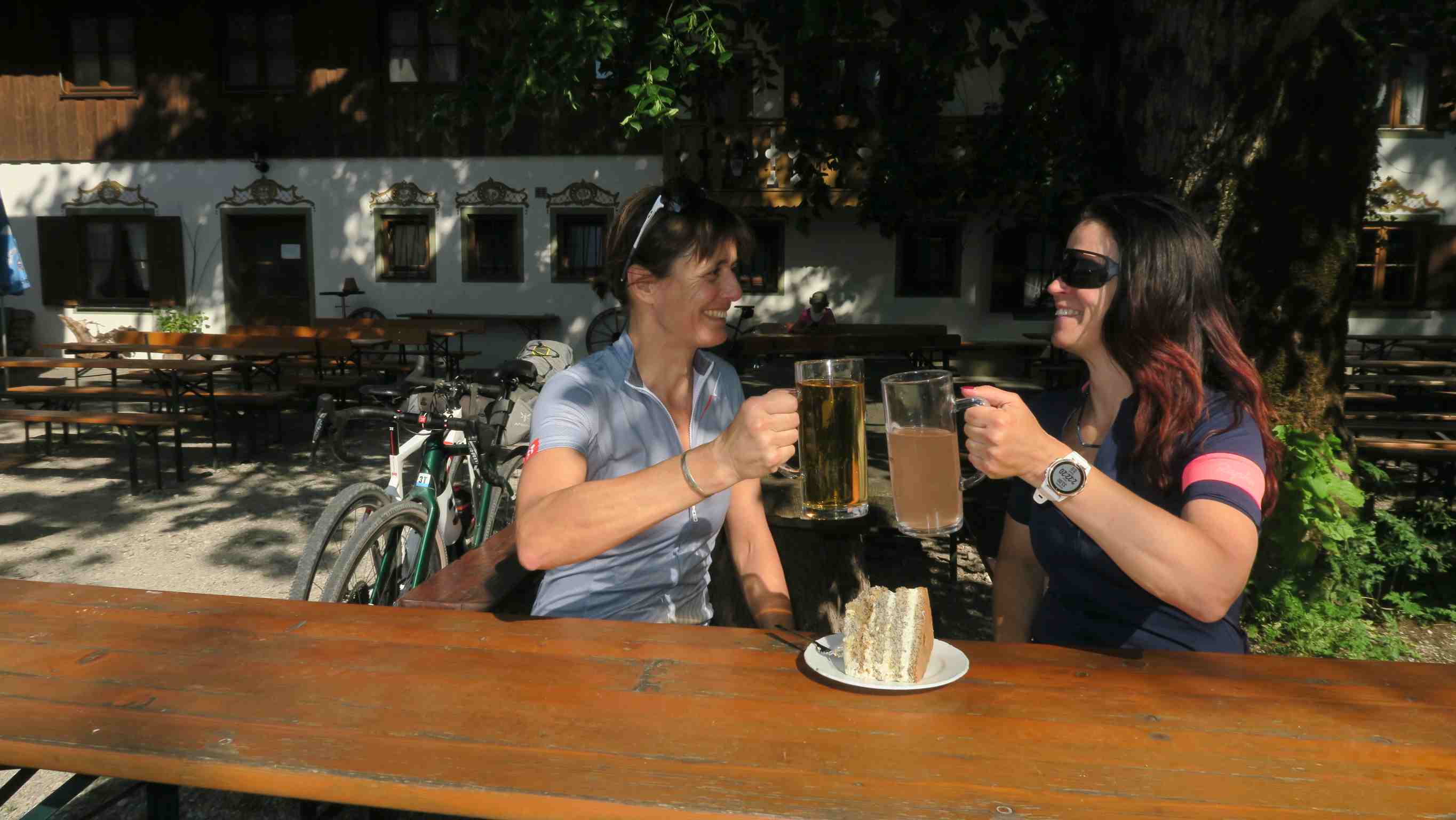 As we get further towards the Alps, diverting away from the river, we ride through gentle rolling hills, before reaching Bad Tölz, with its beautifully restored houses. 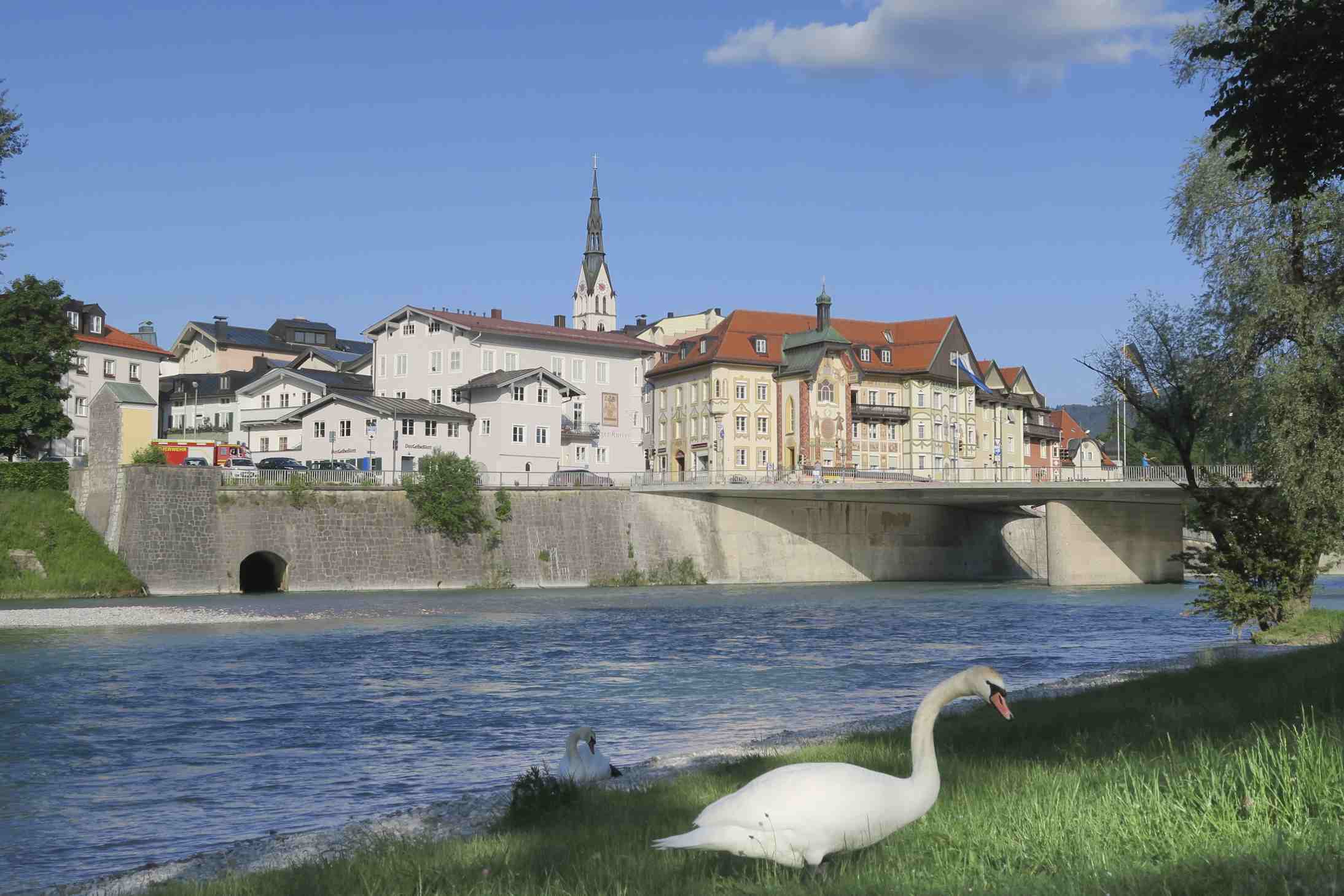 South of Bad Tölz, we are entering the Isarwinkelregion, with its typical glacial morainic landscape, the river featuring wide gravel banks and the distinct glacial green water. 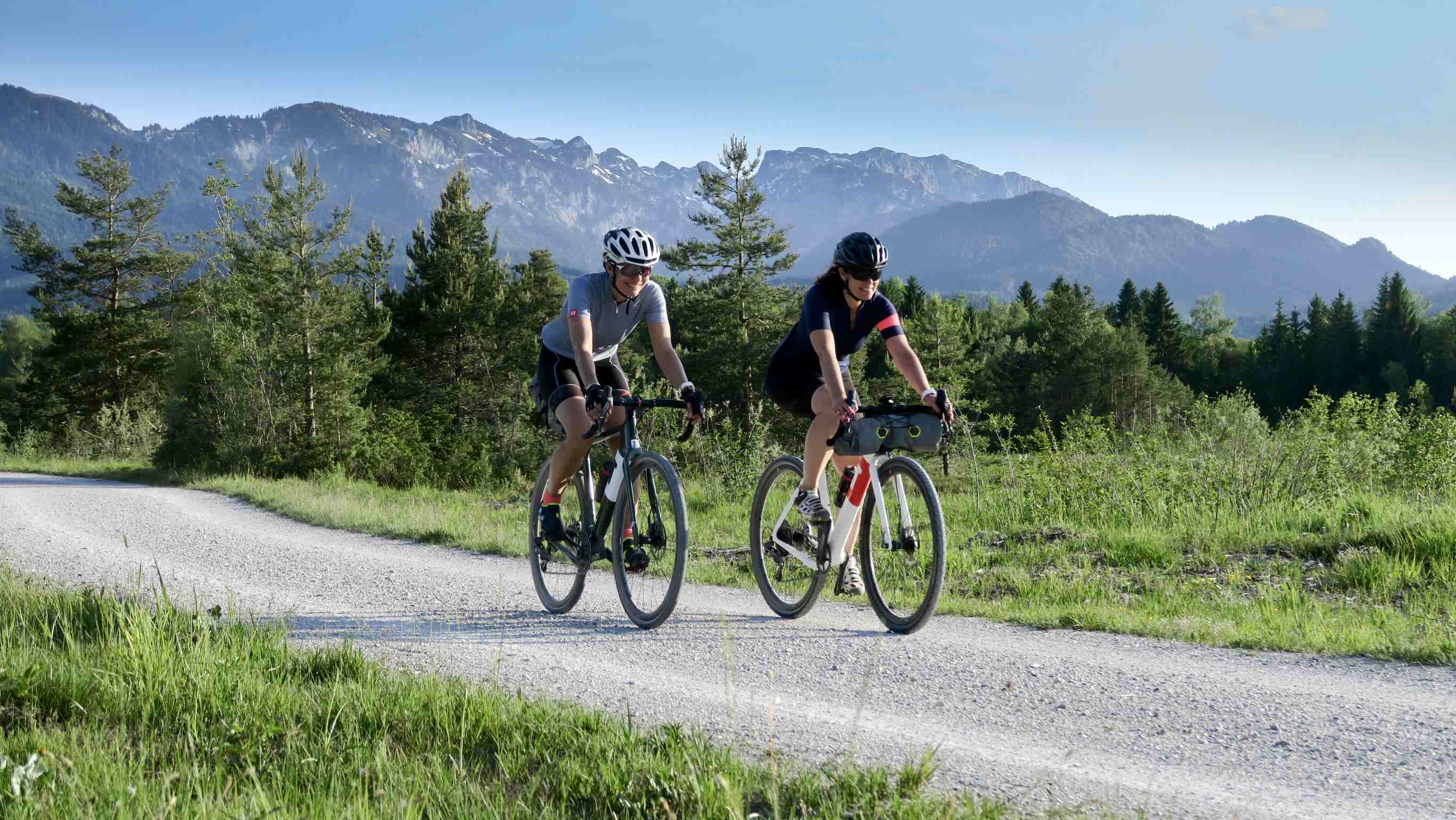 We make Lenggries our home for two nights. The town has been certified as “Luftkurort”, literally meaning ‘air spa’, a title awarded to towns which have a climate and air quality considered beneficial to health and recovery – what better place to stay. 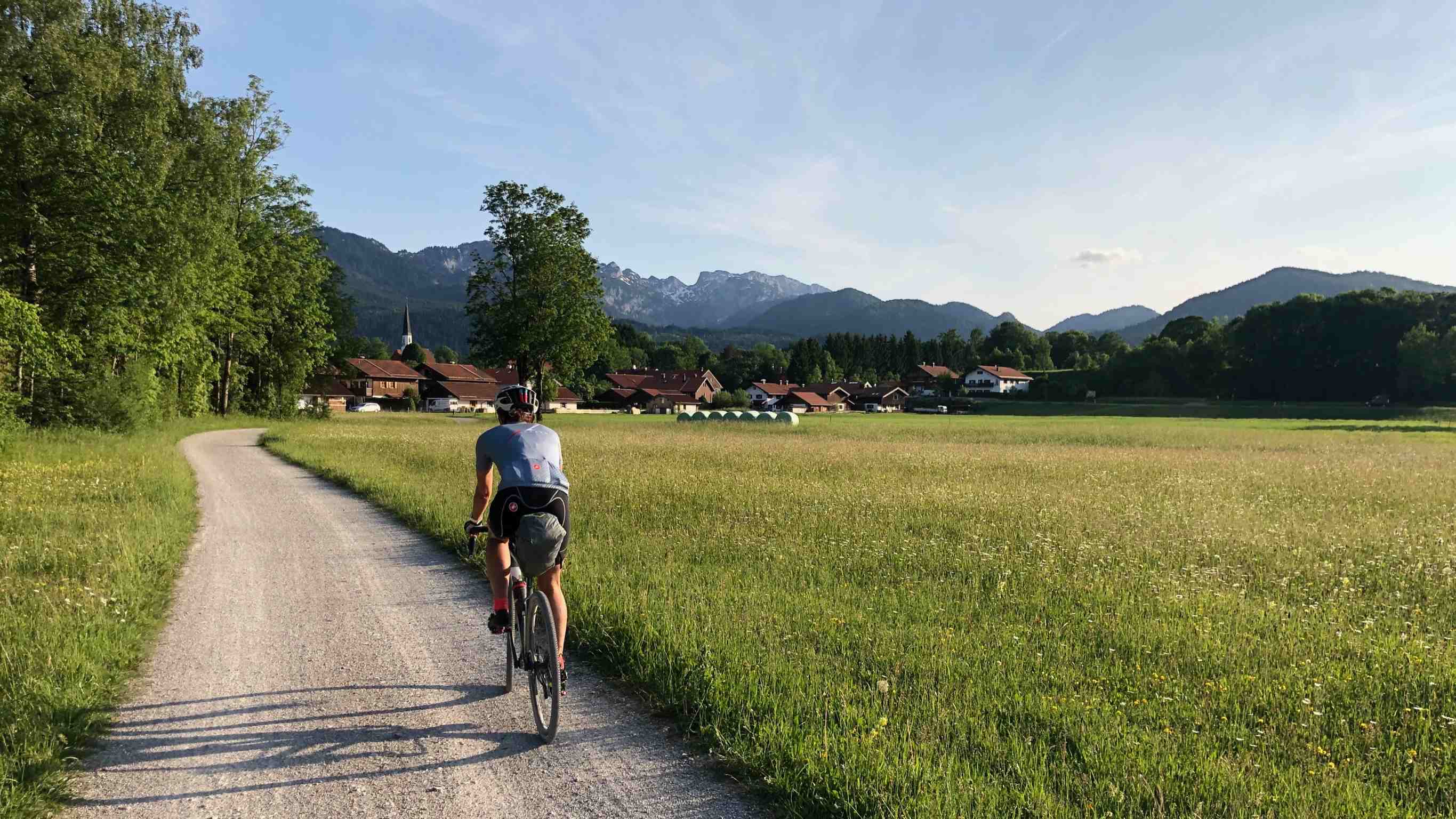 Today’s route being circular, allows us to travel extra light. But even when setting out for what looks like a beautiful sunny day, being close to the mountains means keeping an eye on the weather forecast as thunder storms are common, especially in Summer.

After yesterday’s rather flat route, today is a rude awakening, with several steep climbs. We no longer follow the river Isar, but today is all about exploring the lakes and forest of the Bavarian pre-alps, and of course more beer gardens. It is a constant mix of forestry gravel roads and tar sections – so the Exploros can show off their versatility and rolling speed. 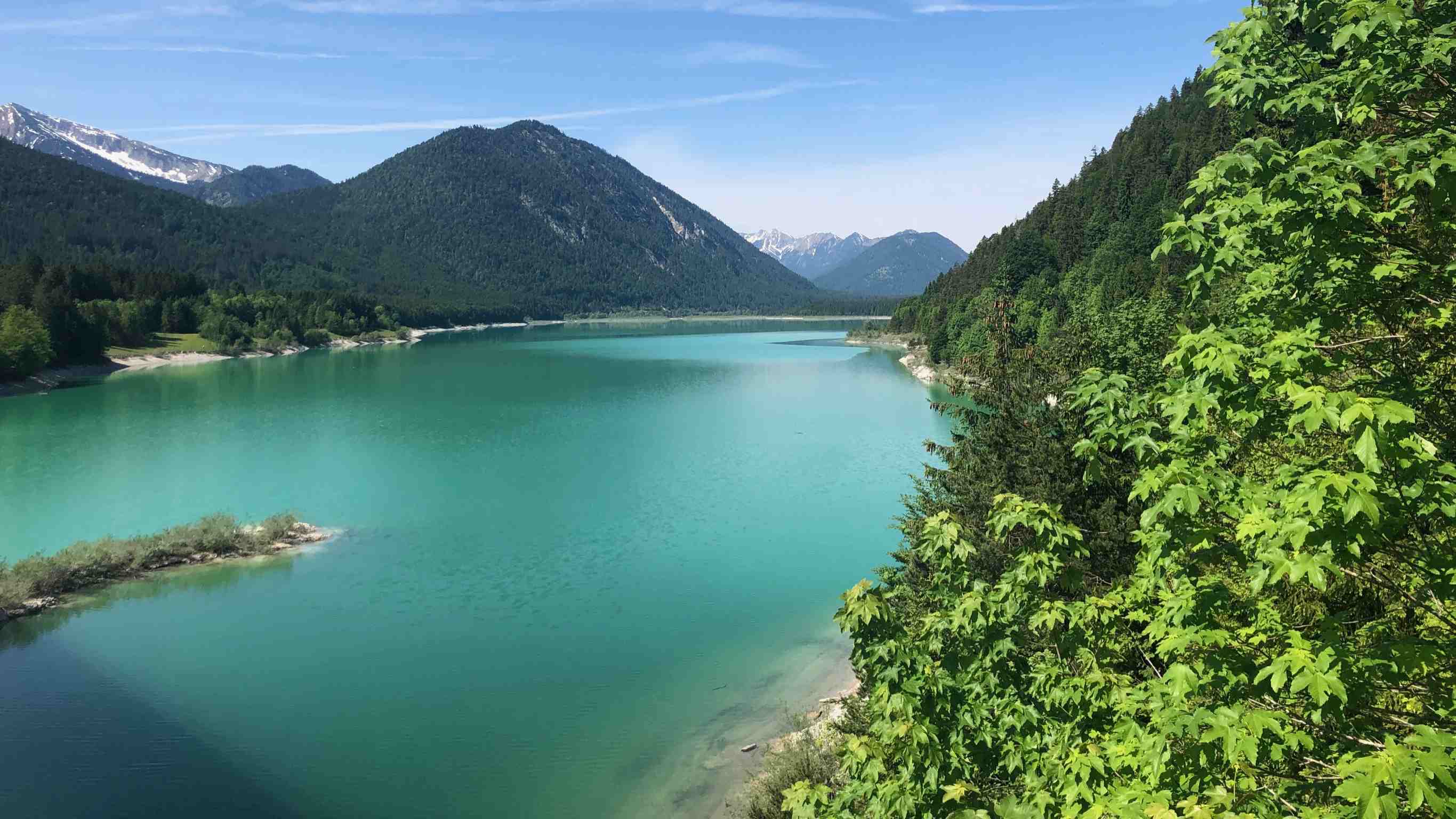 First up is Sylvenstein Dam. It was built in the 1950ies to control the water levels of the Isar and with it floods in Munich. With no further developments on its shores, access to the water is restricted by nature itself, and while it is a popular getaway, it doesn’t get crowded.

A short section on the busy tar road takes us right to the Austrian border, where we turn back onto yet another steep forestry road. There is undoubtfully a negative correlation between the gradient and the number of cyclists we meet. 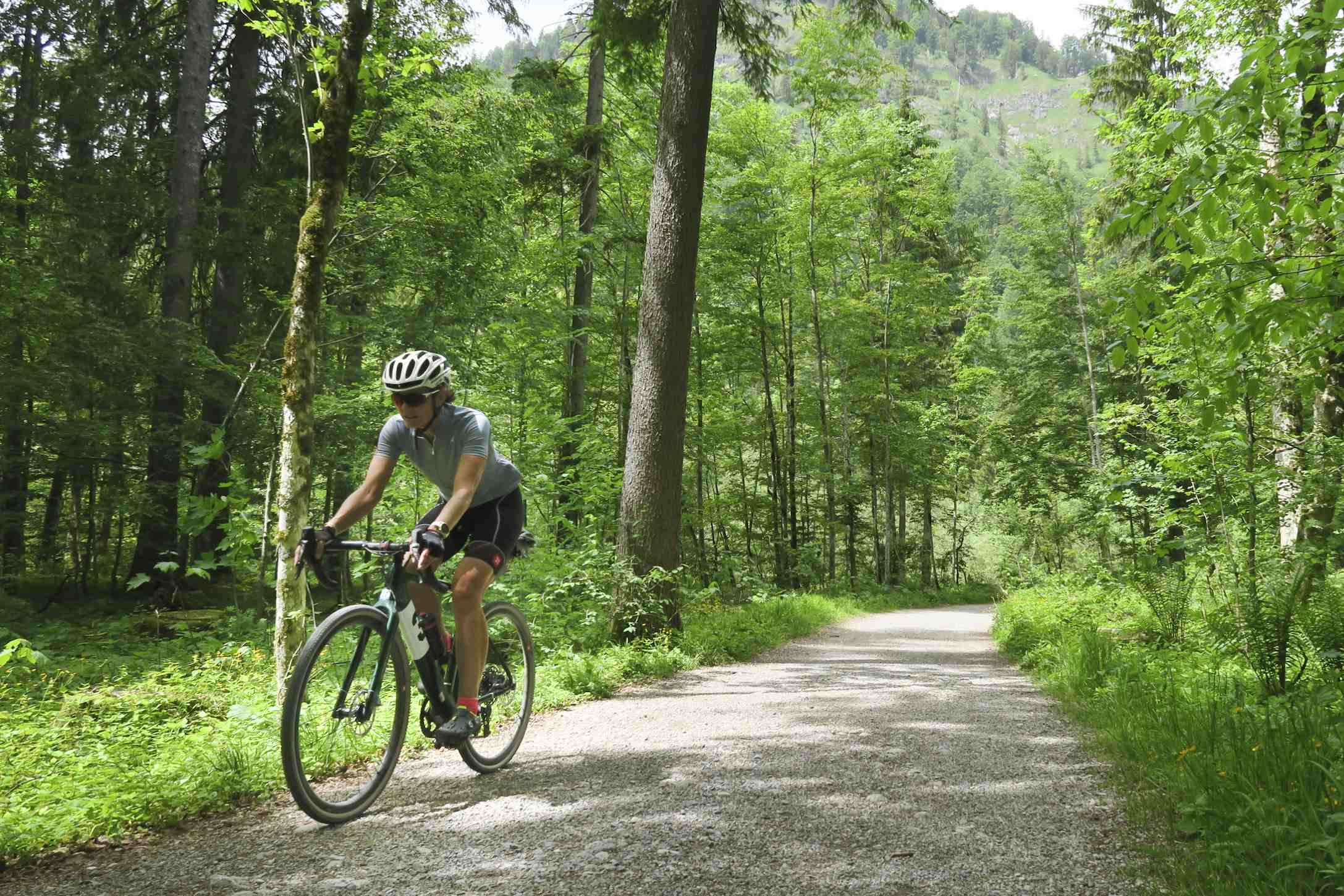 At Rottach-Eggern, there is an option to short-cut to Tegernsee (Lake Tegern), avoiding the next three climbs, but where would be the fun in doing that?! 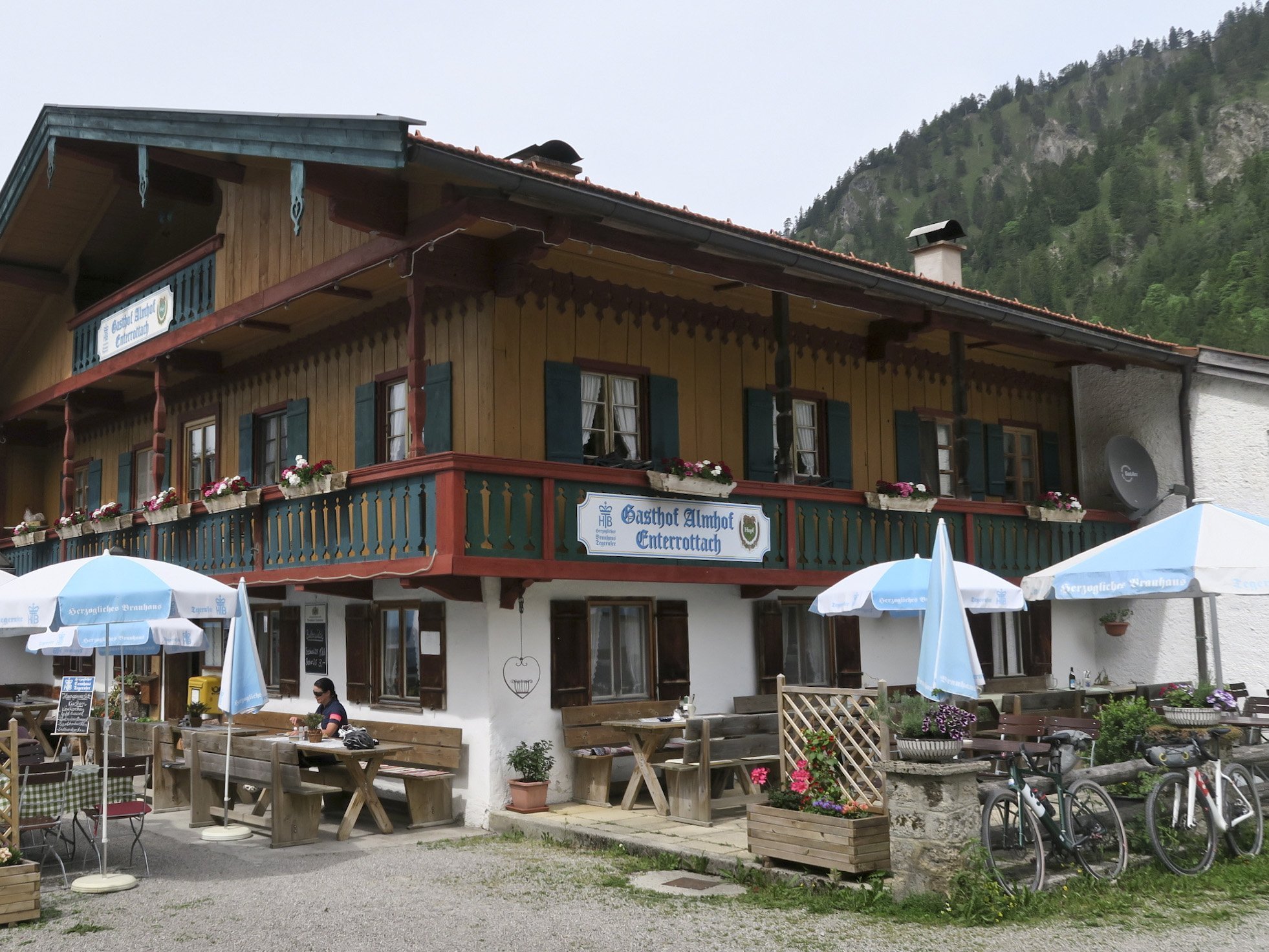 Instead, we pull into the Gasthof Almhof in Enterrottach, at the foot of the Wallberg mountain, where the public road ends. 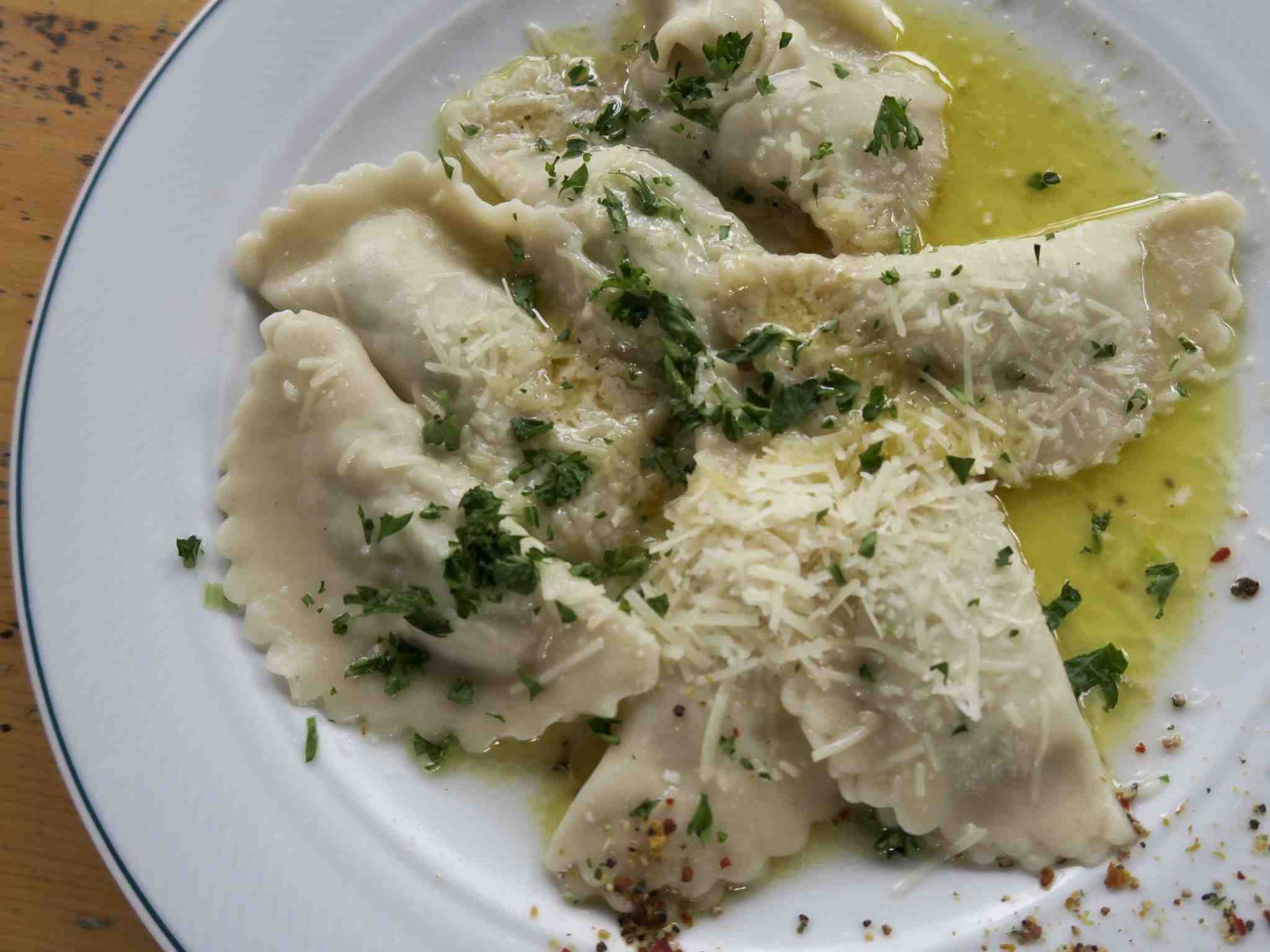 Schlutzkrapfen are a regional speciality. The pasta parcels come with a variety of different fillings, spinach being one of my favourites.

Cars have to pay to continue from here on the narrow tar road up to Valepp and on to Spitzingsee (Lake Spitzing). There is very little traffic, which makes for a pleasant smooth ride. 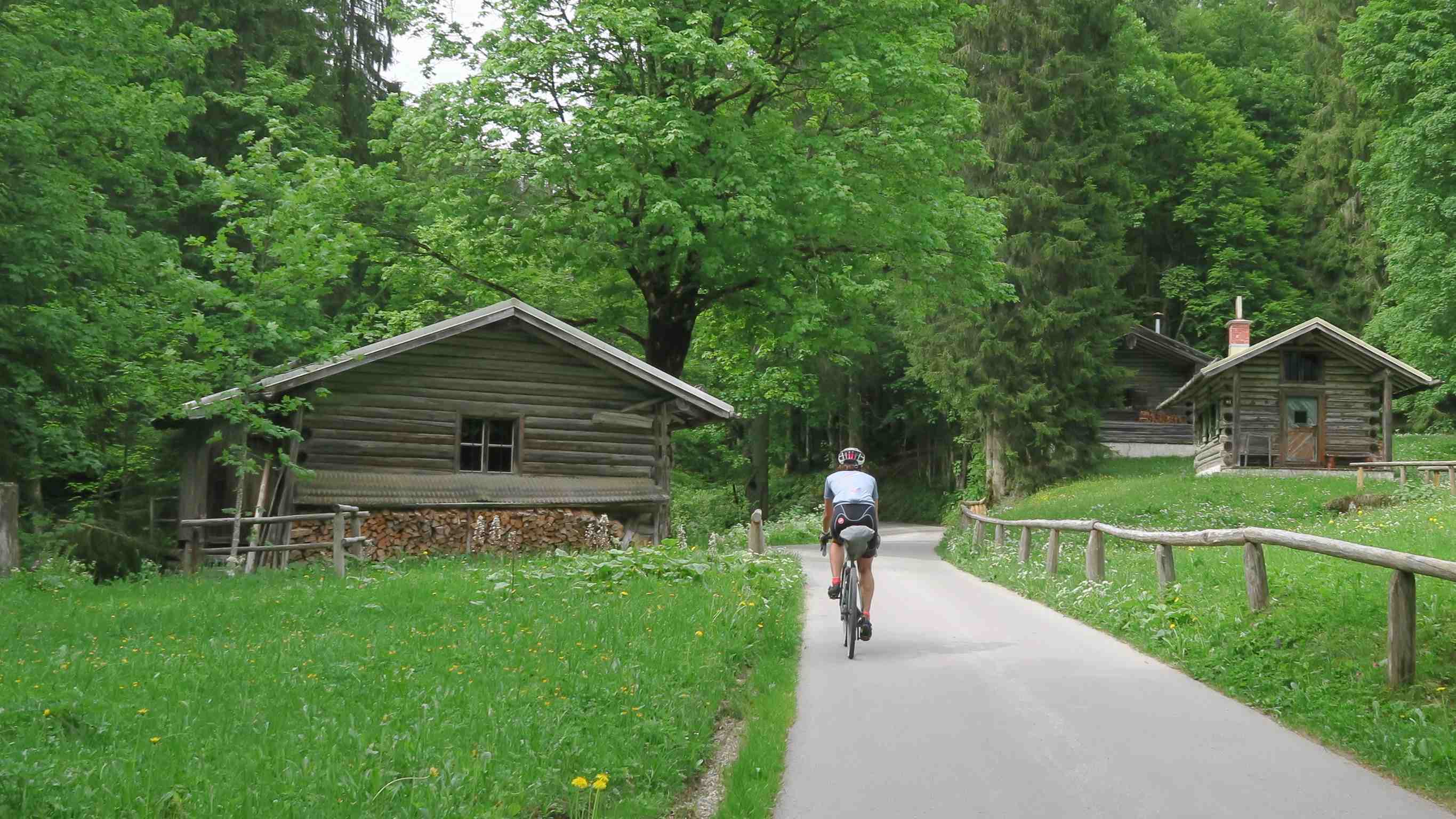 With the afternoon thunder clouds starting to close in on us, we opt for only a short stop on the shores of Spitzingsee, before a blistering descend on the tar road down to Schliersee, some 400m below. 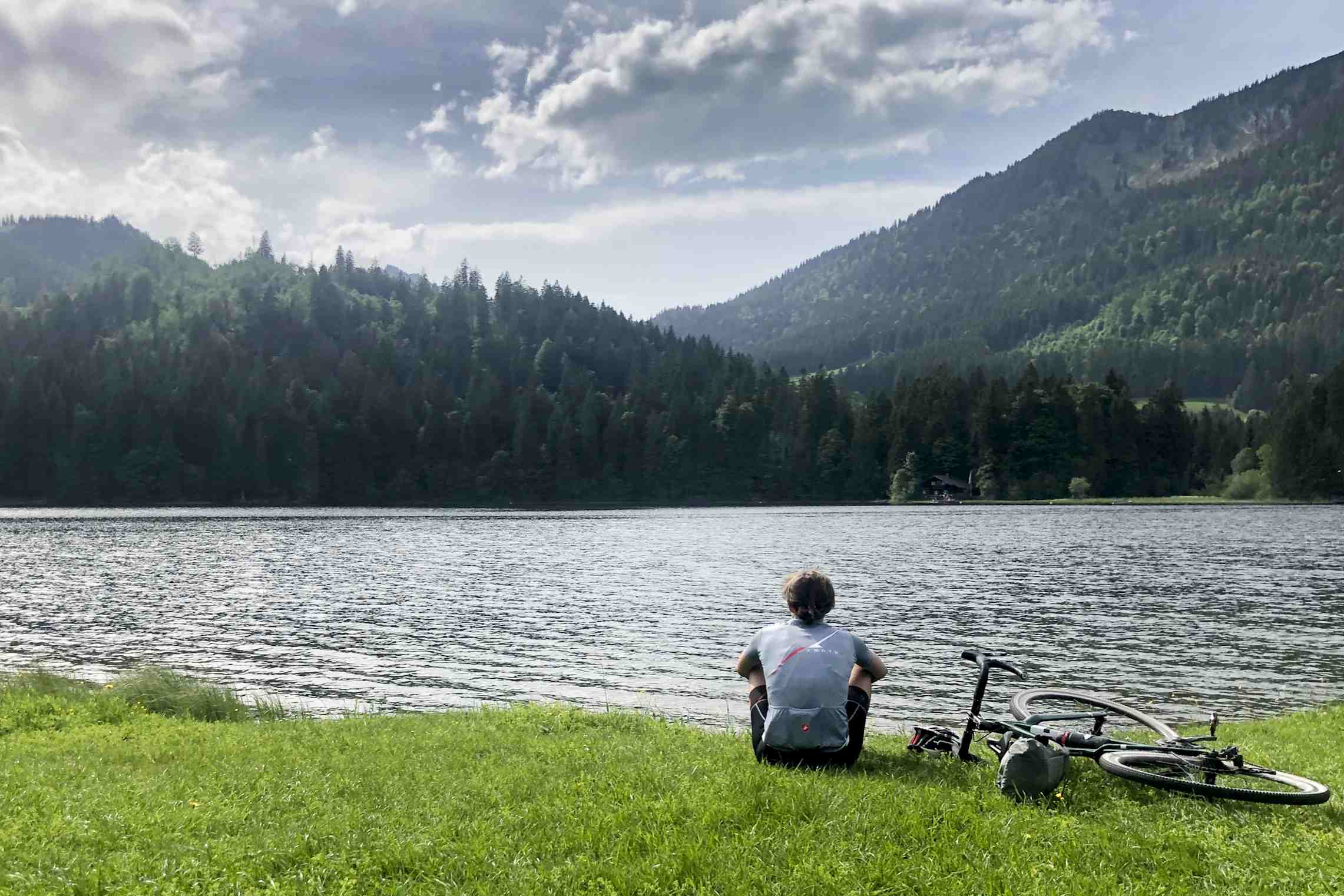 The cycling path hugs the western shore of Schliersee, avoiding the busy road on the eastern side. Then it’s one more gravel climb to get over to Tegernsee. Due to the incoming weather, I have to trust Kimi that normally you get rewarded with killer views. Instead, we get caught out by hail.

From Tegernsee, it is 30km relatively fast rolling back to Lenggries. I am hugely disappointed that we did not get to drink the famous Tegernseer Beer at the shores of Tegernsee – but a delicious dinner at Schweizer Wirt only a few hundered metres from our hotel consoles us.

Today we continue our journey along the Isar, via the Jachenau, a beautiful high-level valley. 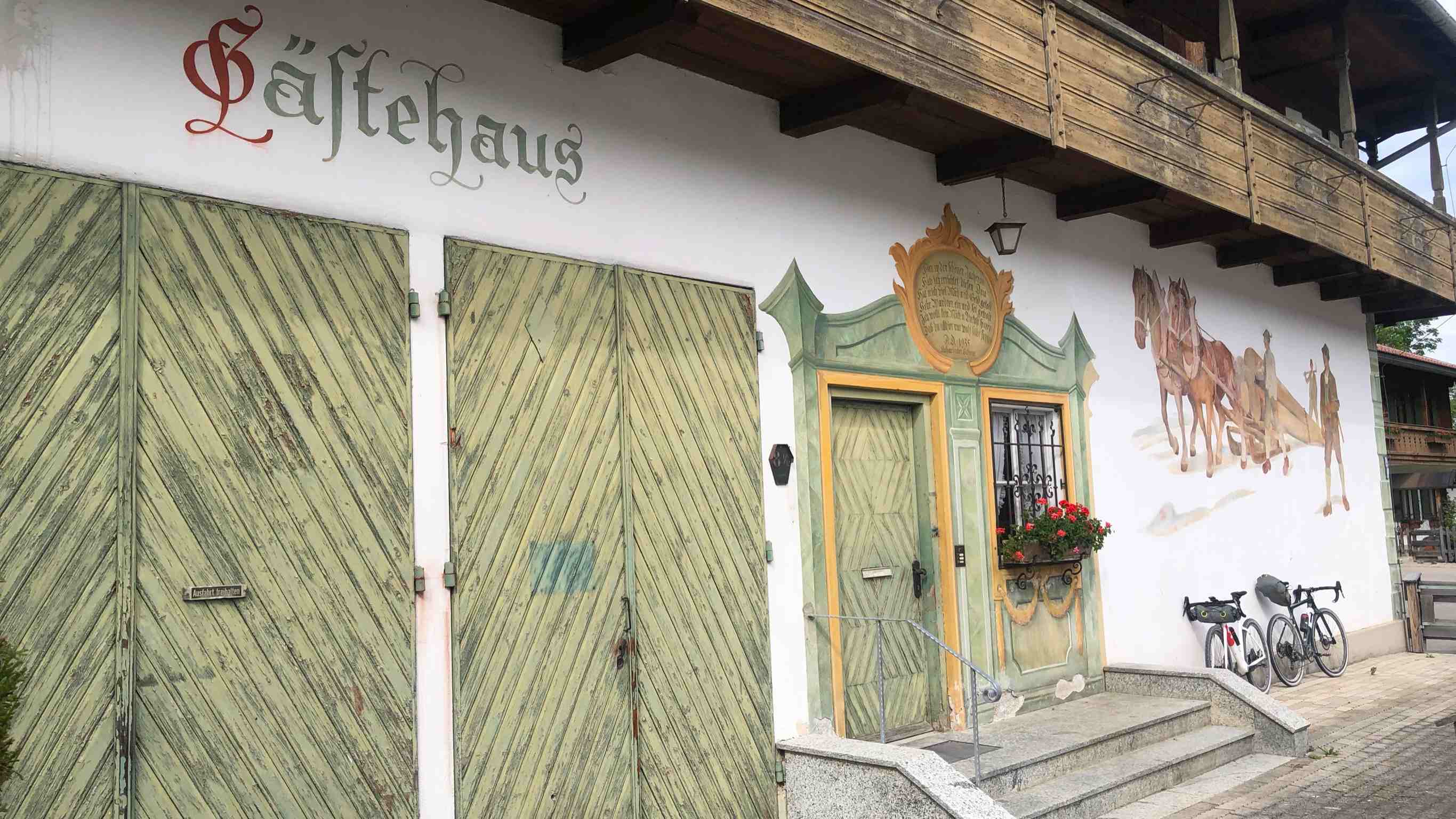 Leaving Jachenau, we hug the southern shores of Walchensee, with 192m depth one of the deepest and largest alpine lakes in Germany. From there a cycling path runs through beautiful forests to Wallgau, where we rejoin the Isar Cycling Path. 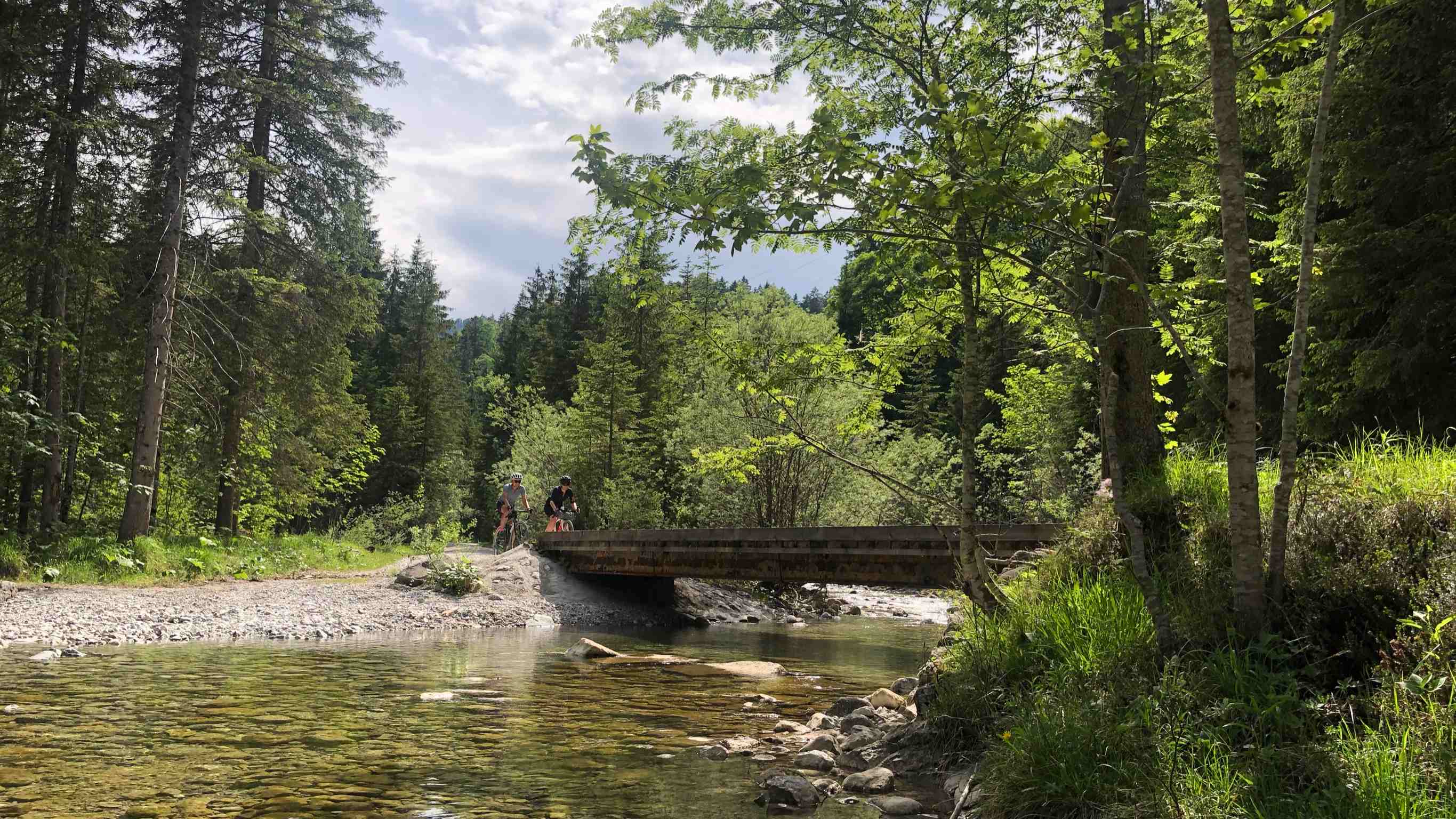 The centre of Wallgau is like an art gallery with its colourful painted houses calledLüftlmalerei, a mural art that is native to villages and towns of southern Germany and Austria, and especially here in Upper Bavaria and Tyrol. 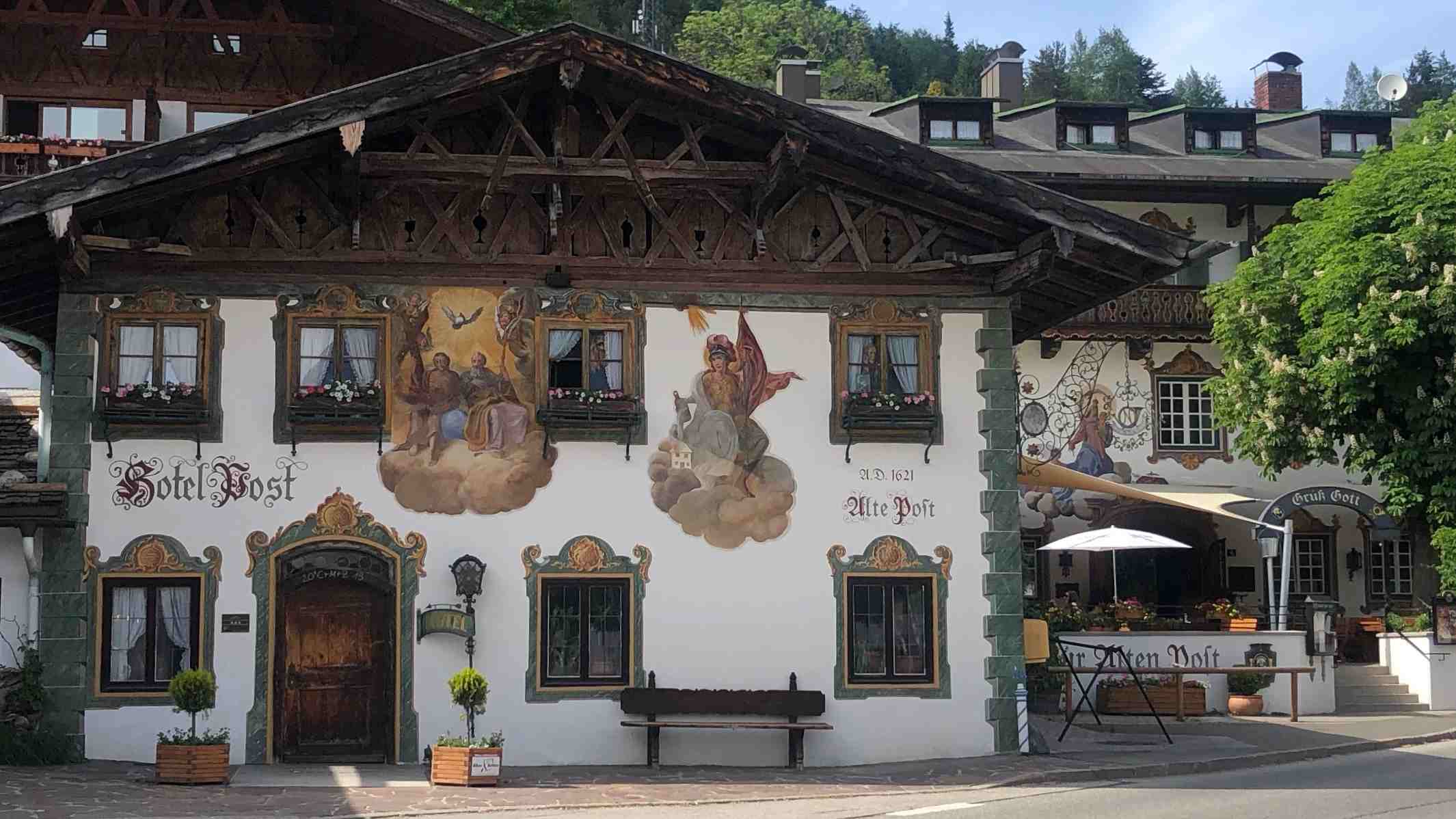 Many of the villages feature fountains, and unless there is a sign saying “Kein Trinkwasser”, the water is perfectly fresh and suitable for drinking. 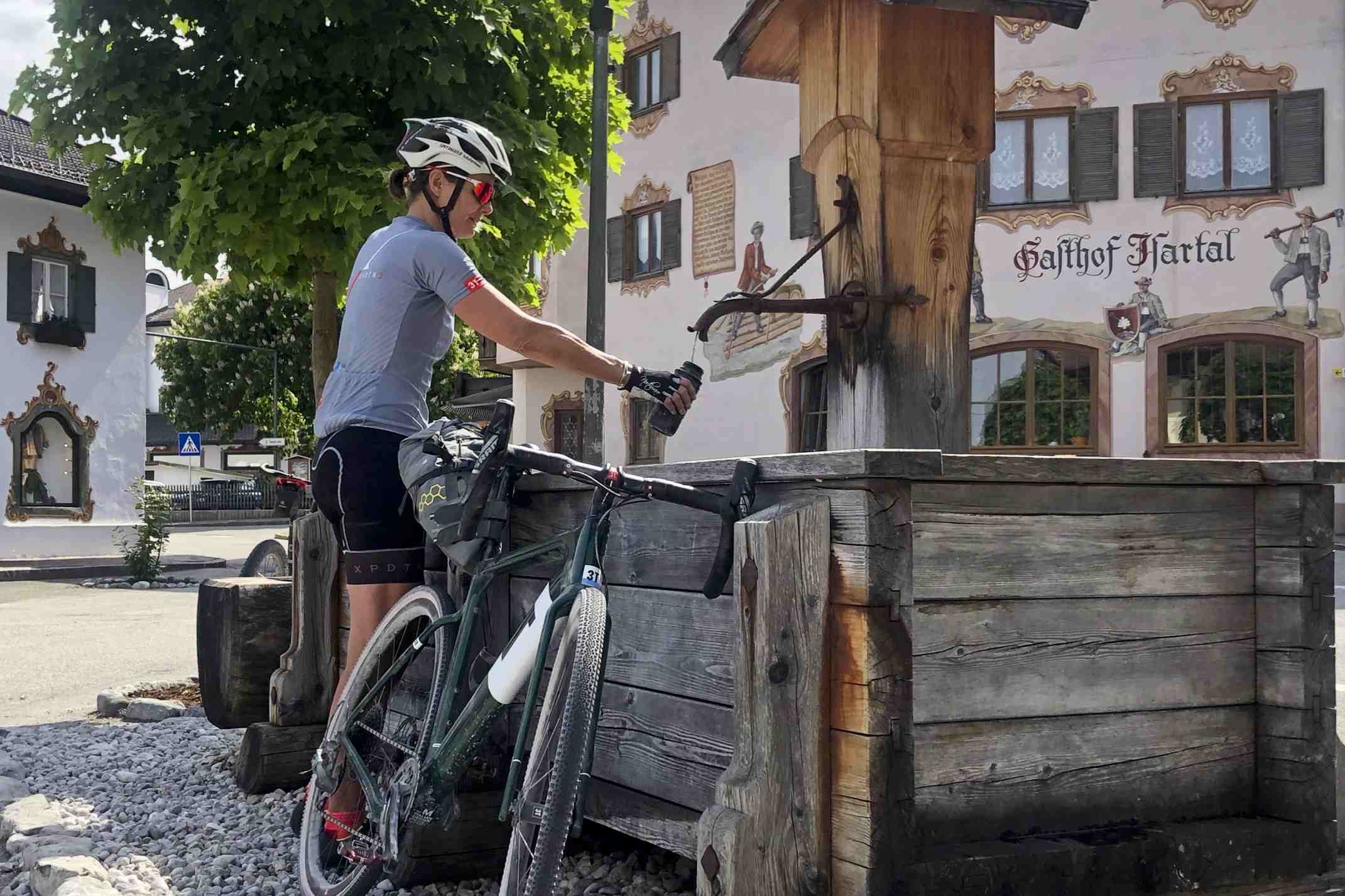 Mittenwald, famous for its violin making history, is the last town before the Austrian border. Just on the other side lies Scharnitz, an idyllic town with about 1300 inhabitants, at the foot of the KarwendelMountains and the Wettersteingebirge.

From here, it’s a one-way gravel path into the Hinterautal– the valley where the Isar has its source. No doubt, this is the highlight of the trip. 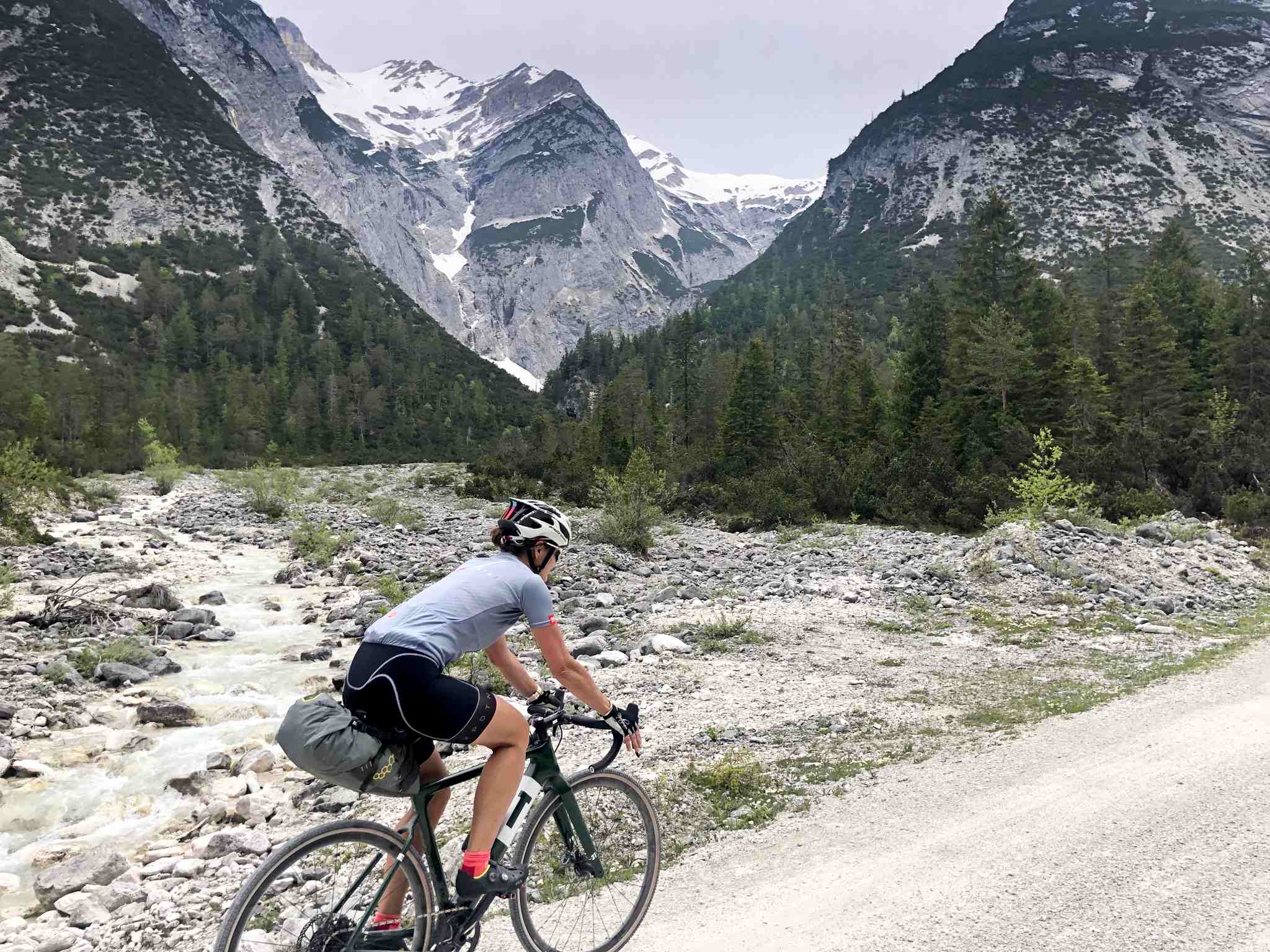 Not so much the source itself, which at this time of year, with lots of snow melt running off the mountains is actually not even really visible, but the deep cut valley and surrounding mountains, with scree running off their sides. 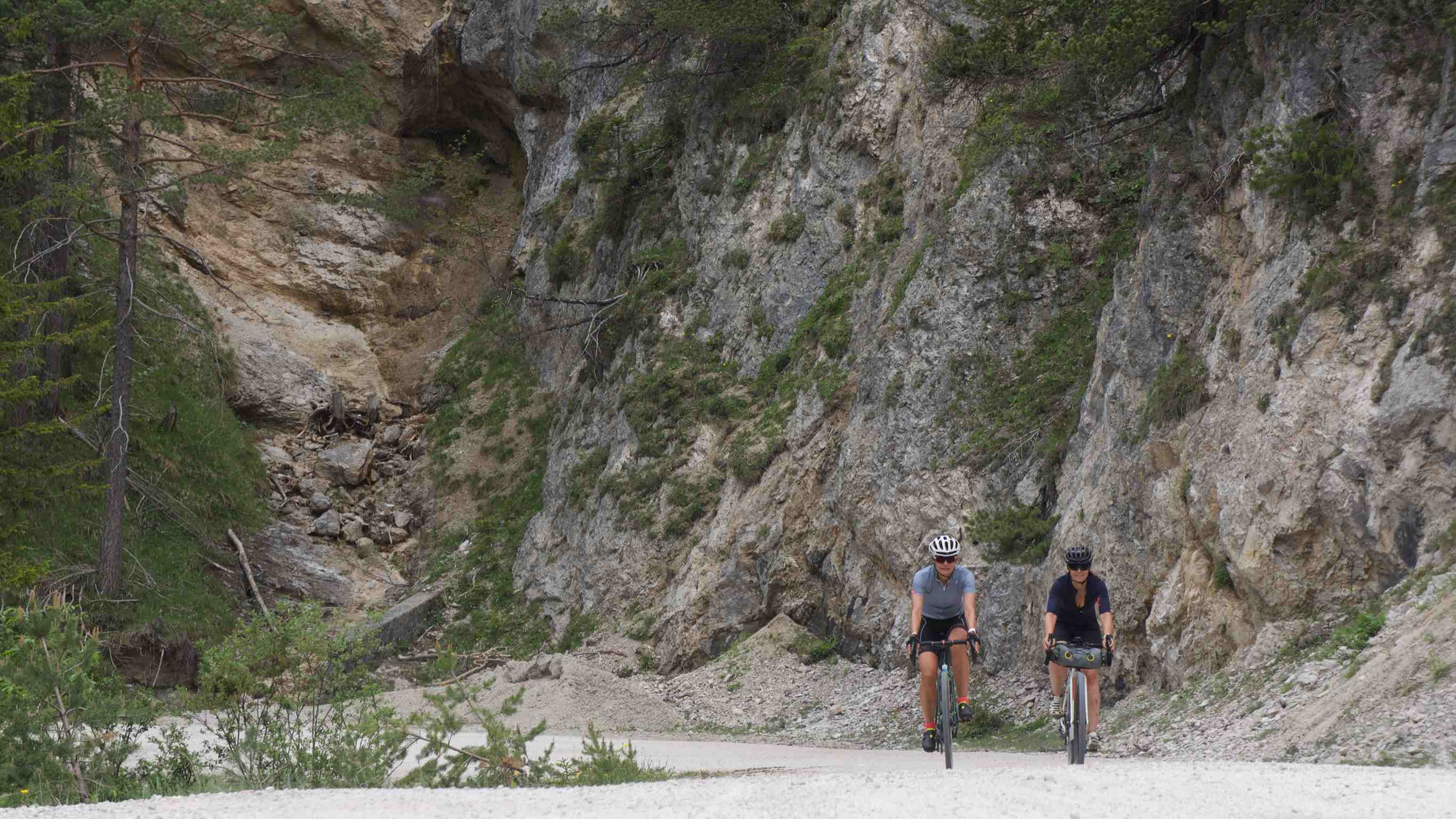 Deep in the Karwendel there is still snow, so while we are travelling lightweight, there are several bikers coming to the other direction in full skiing kit, just finishing up some alpine tours and the quickest way to get in and out is by bike. 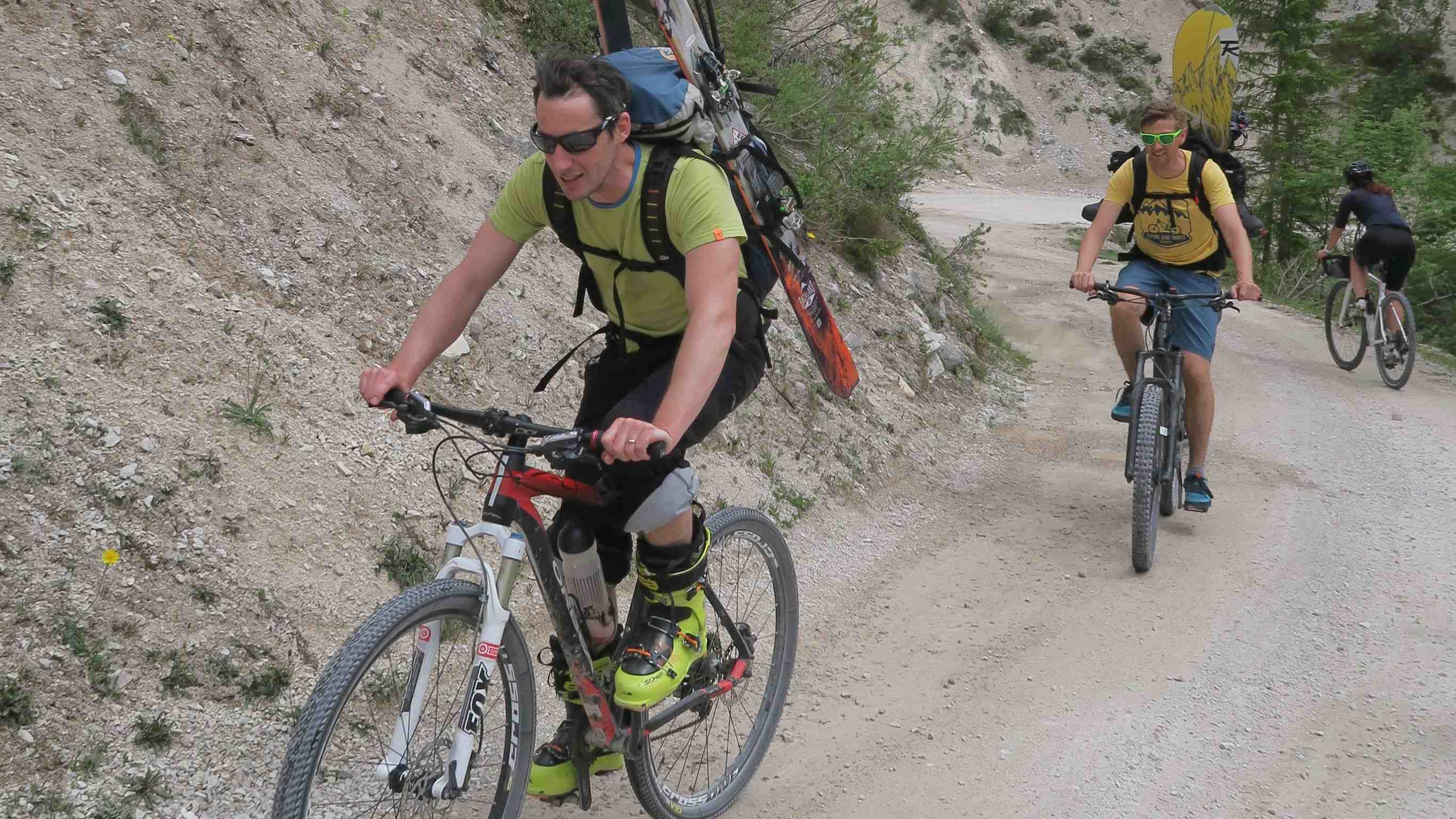 It’s about 15km one way of steady uphill, therefore coming back is an absolute breeze. 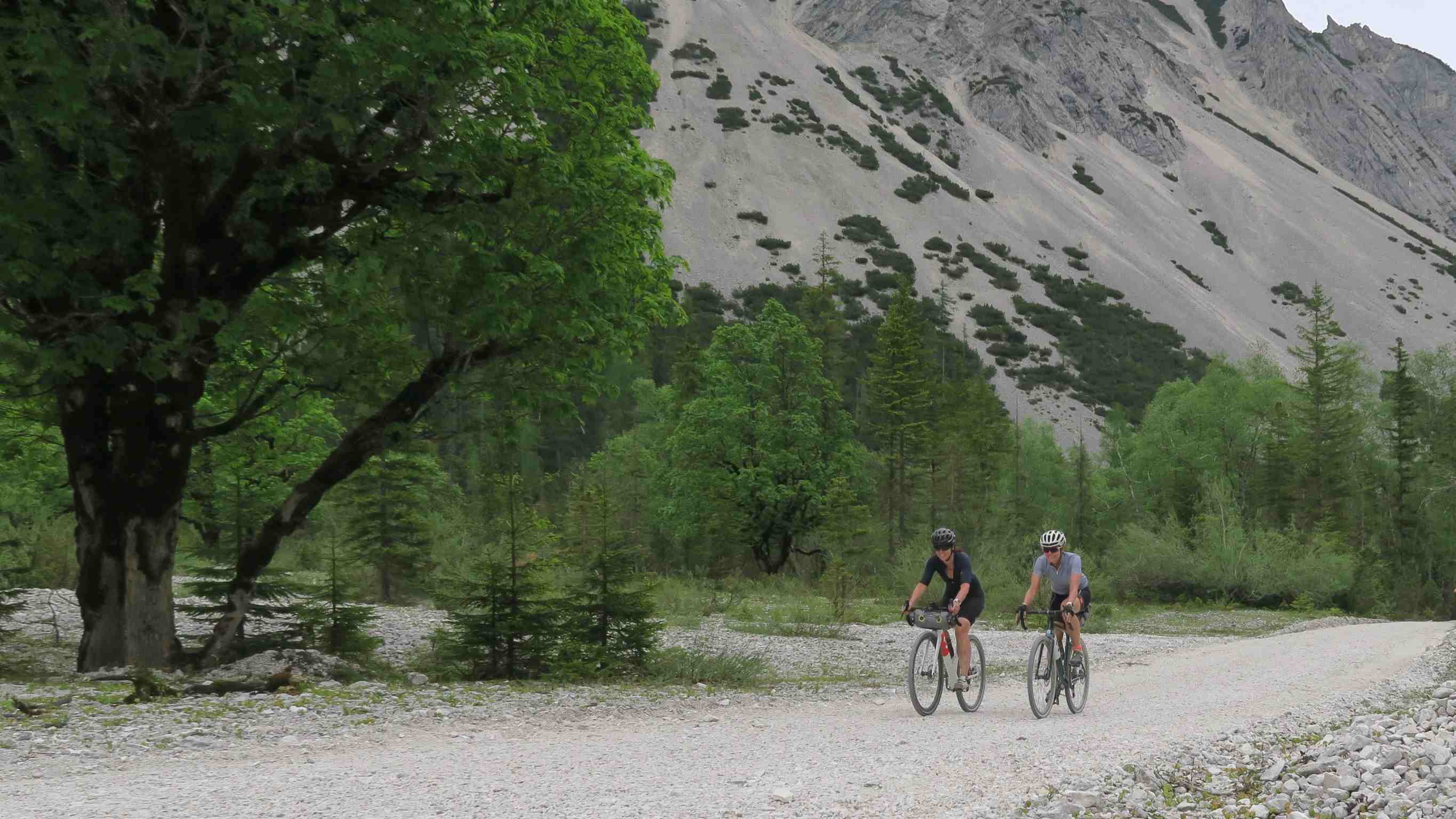 If you have the time, stay in Scharnitz for another night to make the most of it, alternatively, you can head back to Mittenwald on the Bavarian side of the border to meet your friend B.O.B. for the ride home.

Terrain: Fast flowing gravel and tar roads on day 1&3. A few steep hills on day 2 but all on good forestry gravel roads.

Weather: 15-30 degrees Celsius. Spring and fall can get a little chilly at the higher elevations, summer brings the risk of late afternoon thunderstorms. The weather can change quickly.

Below you will find more photos, the GPS routes we took on the WAHOO on KOMOOT, and don’t forget to leave your comments and questions below that!

Enjoy the rest of the PHOTO gallery here:

Our GPS WAHOO routes on KOMOOT: