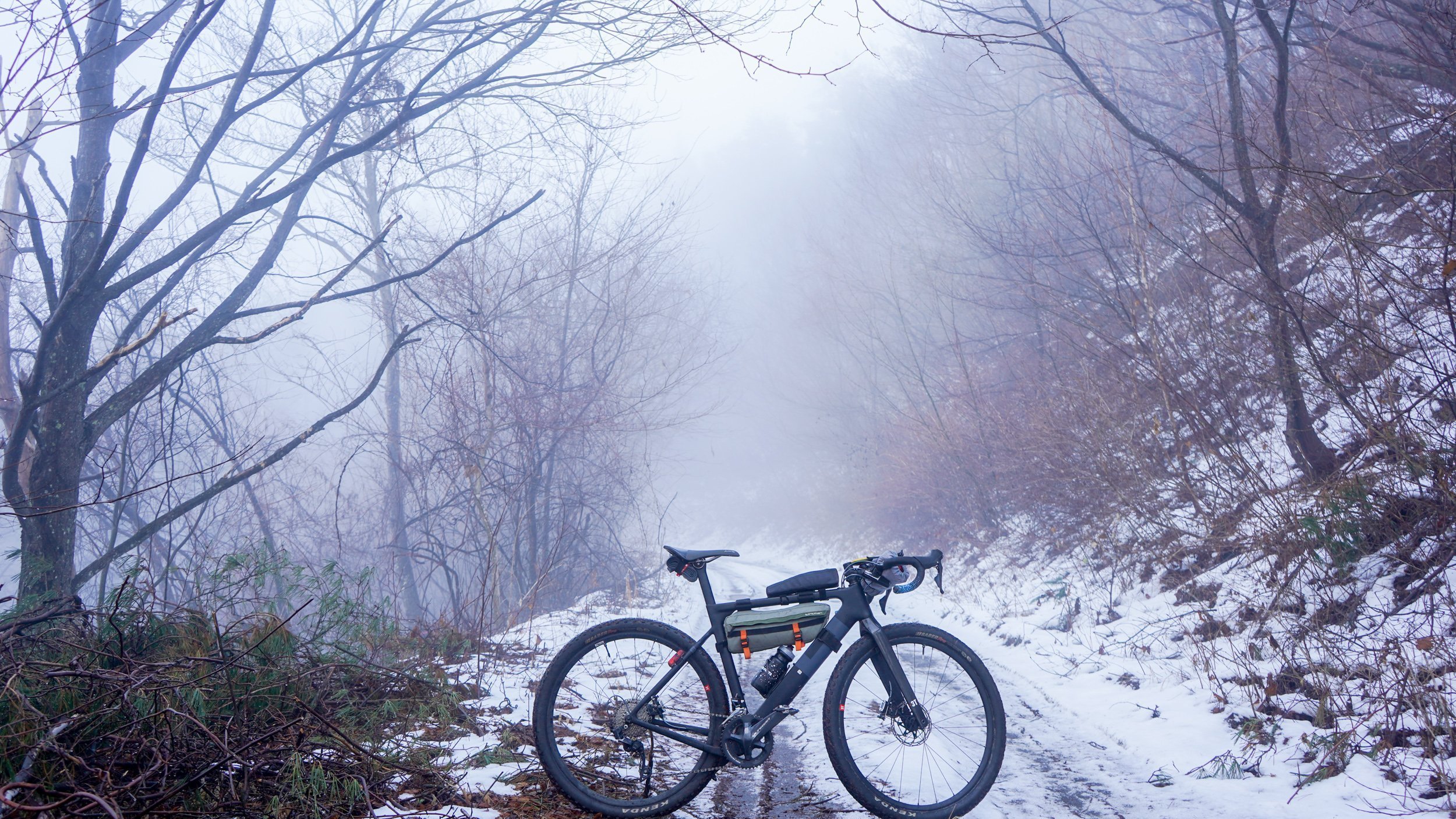 December, 2019. It’s the annual homecoming to visit my parents’ house. Mt. Ohjoh is a local elementary school excursion trip route in my hometown. Mount climbing is an important annual event of the town on New Year’s Day because this is a famous monument in the center of Japan. And the forest road is where it begins. 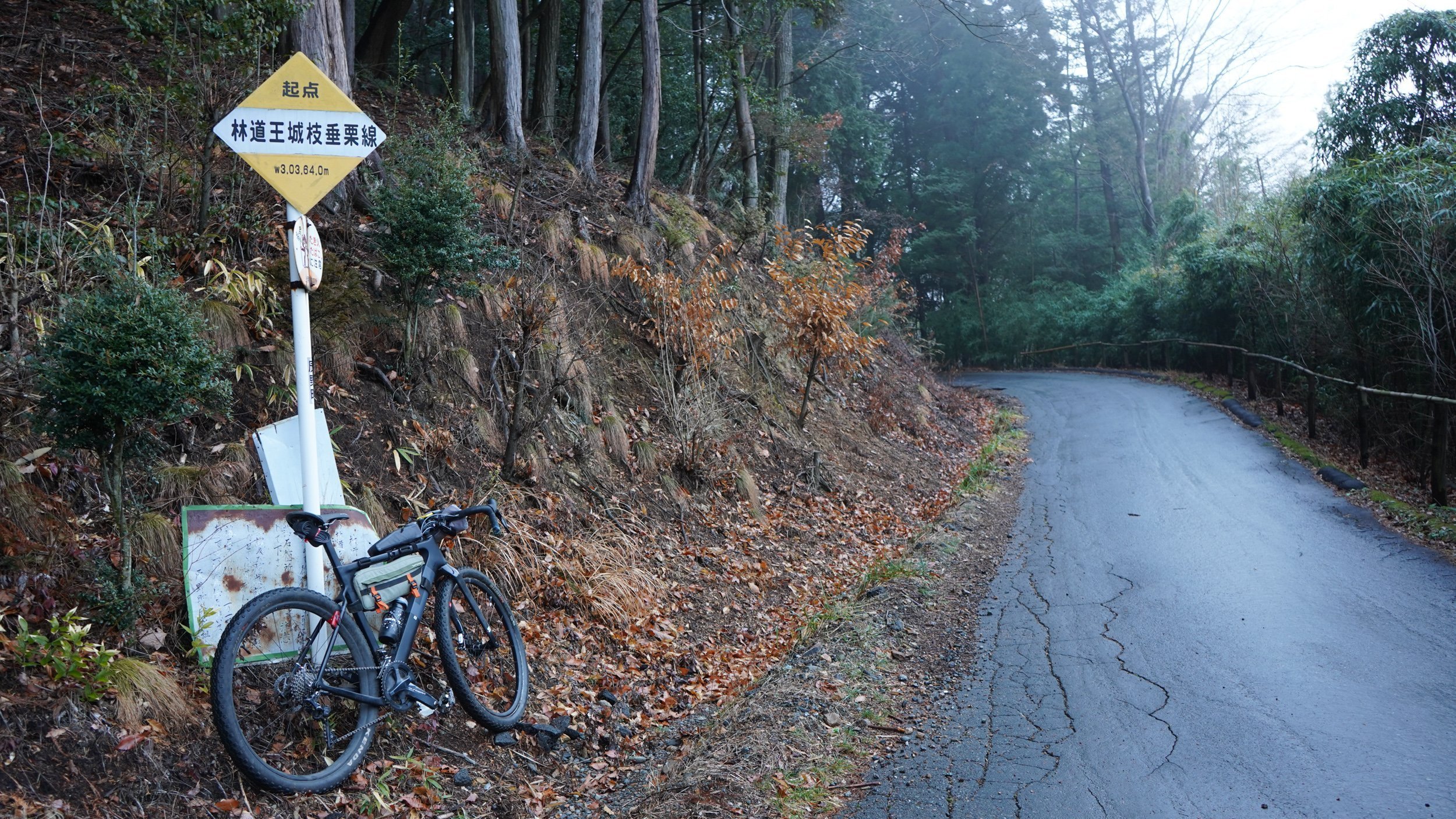 The starting point is close to Tatsuno Stadium from JR Iida Line Tatsuno Station. This was a gravel road when I was a student. Now there is paved road and relatively easy to riding a bike. 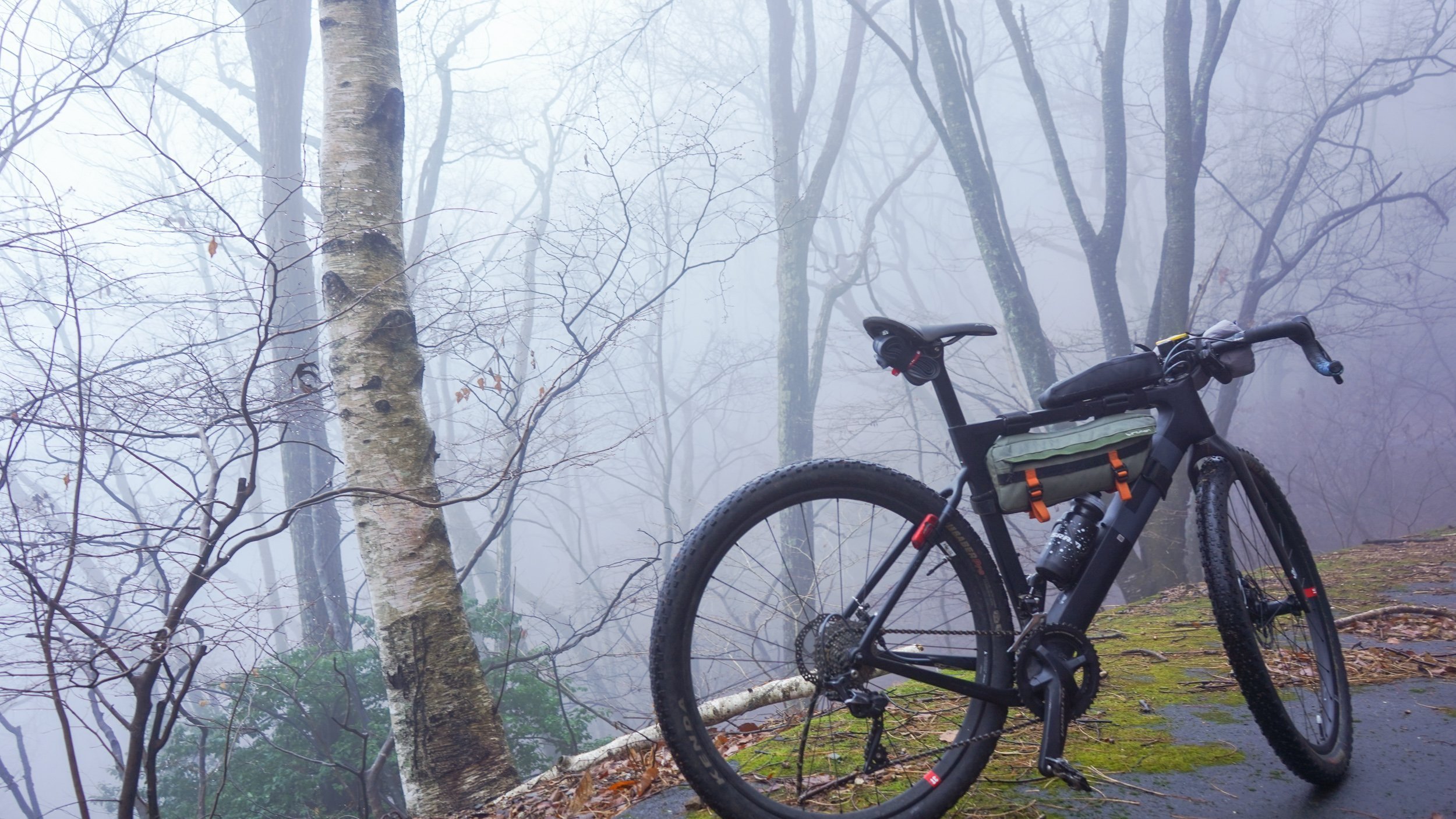 It stopped raining in the morning. I was riding in the fog and in the woods of White birch (tree of Nagano prefecture), and the road surface is filled with moss. What a familiar taste of “Nagano.” 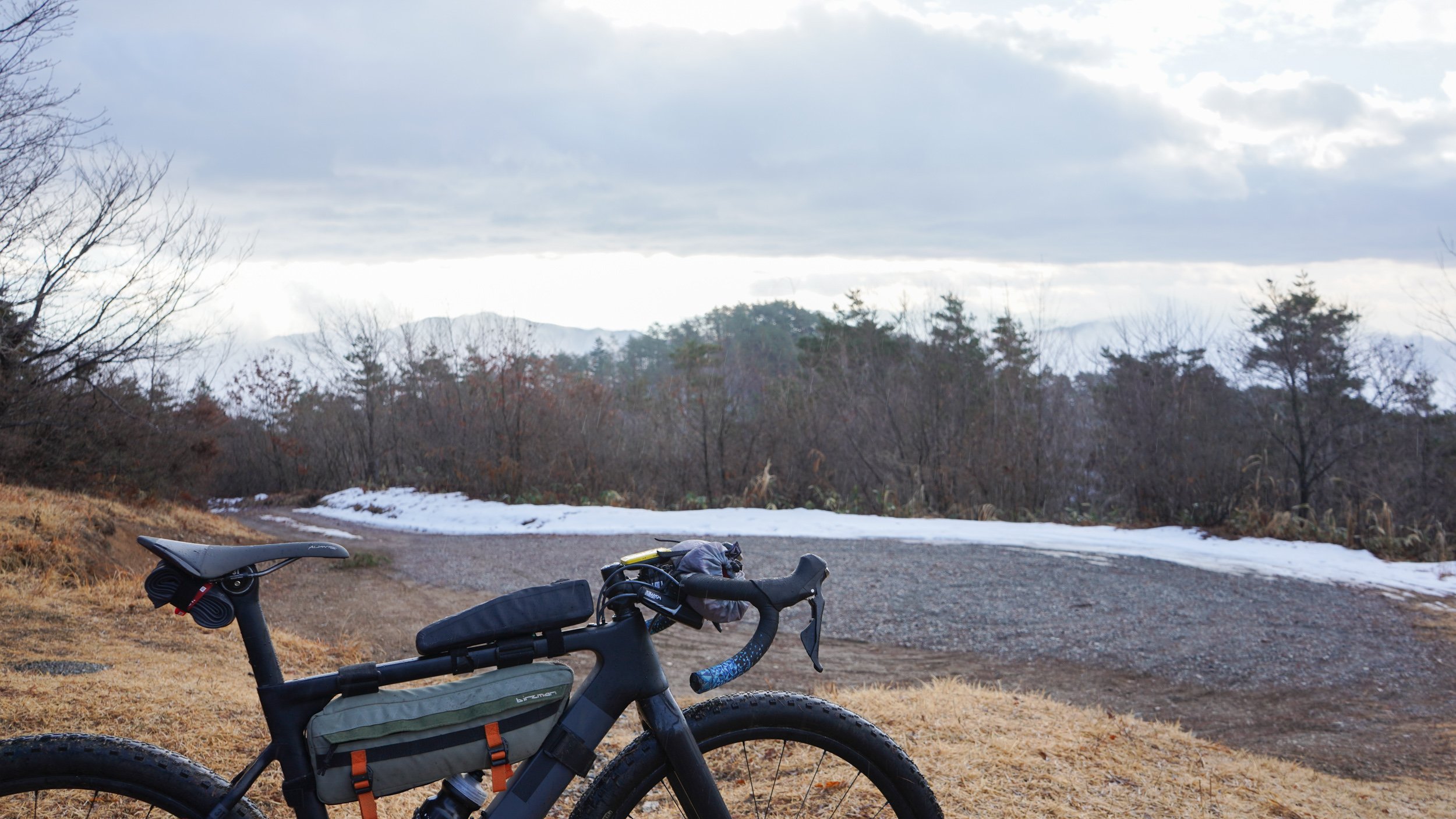 137 degrees E, 36 degrees N., the location of Mt. Tsurugamine (1,200m) and is the center of Japan. The mountains around spread like a panorama view when seeing through from the roof observation deck. The unpaved dirt course start showing up here with some snow. 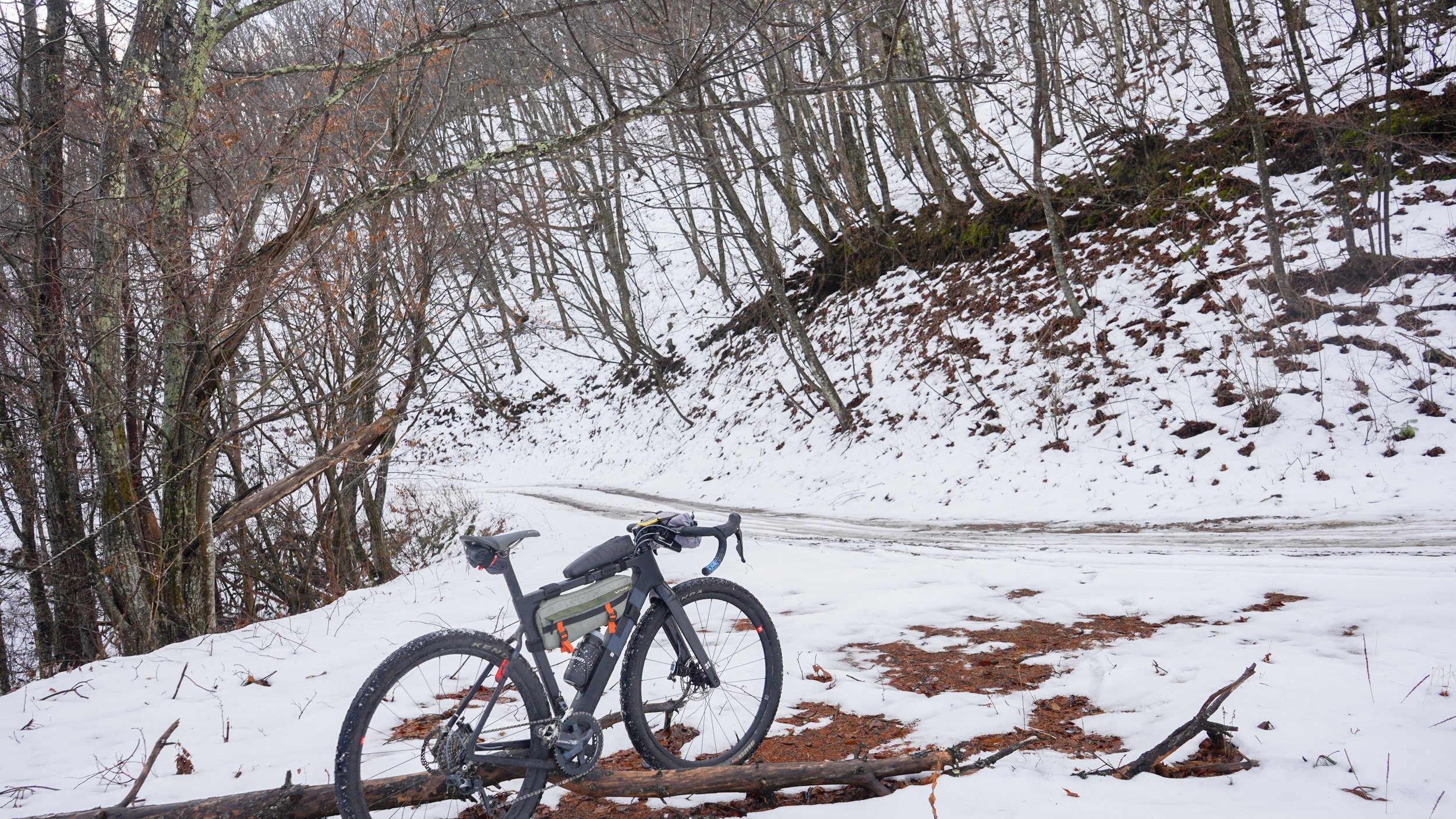 Knowing there would be a big snow-covered road, I chose KENDA SABER (27.5×2.05 inch) tire to put on my EXPLORO. The north slope is usually in the shadow so there is ice on the road. Carefulness is always a good reminder in this area.

The center of the road is where you want to stay. It’s less slippery and safe. There are many beautiful scenes just by the corners worth to pay attention to while going down on this forest road. The best season to visit here is in summer. 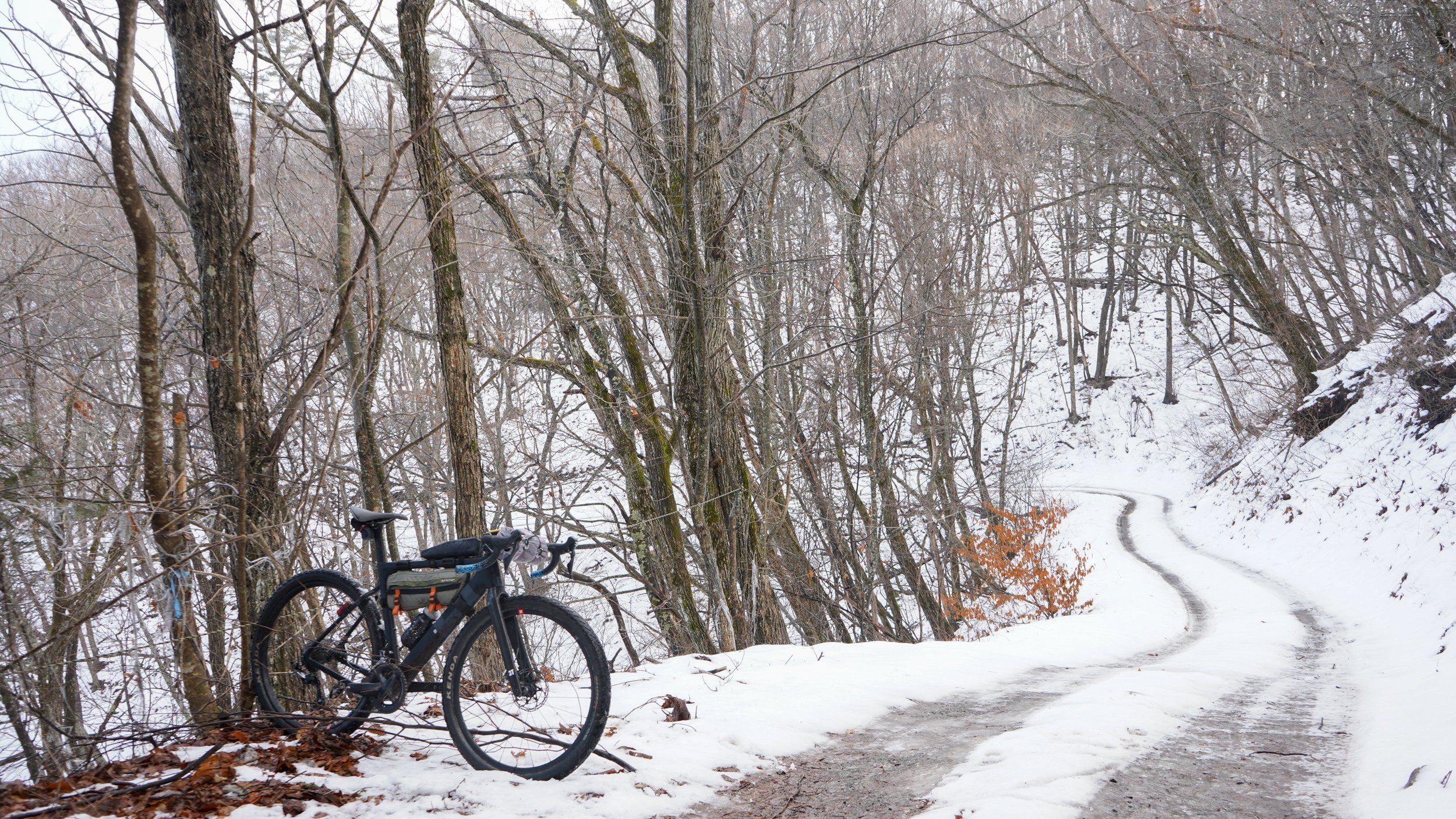 The forest road ends in a bird migratory area. Lots of tourists come here to watch birds in the winter. 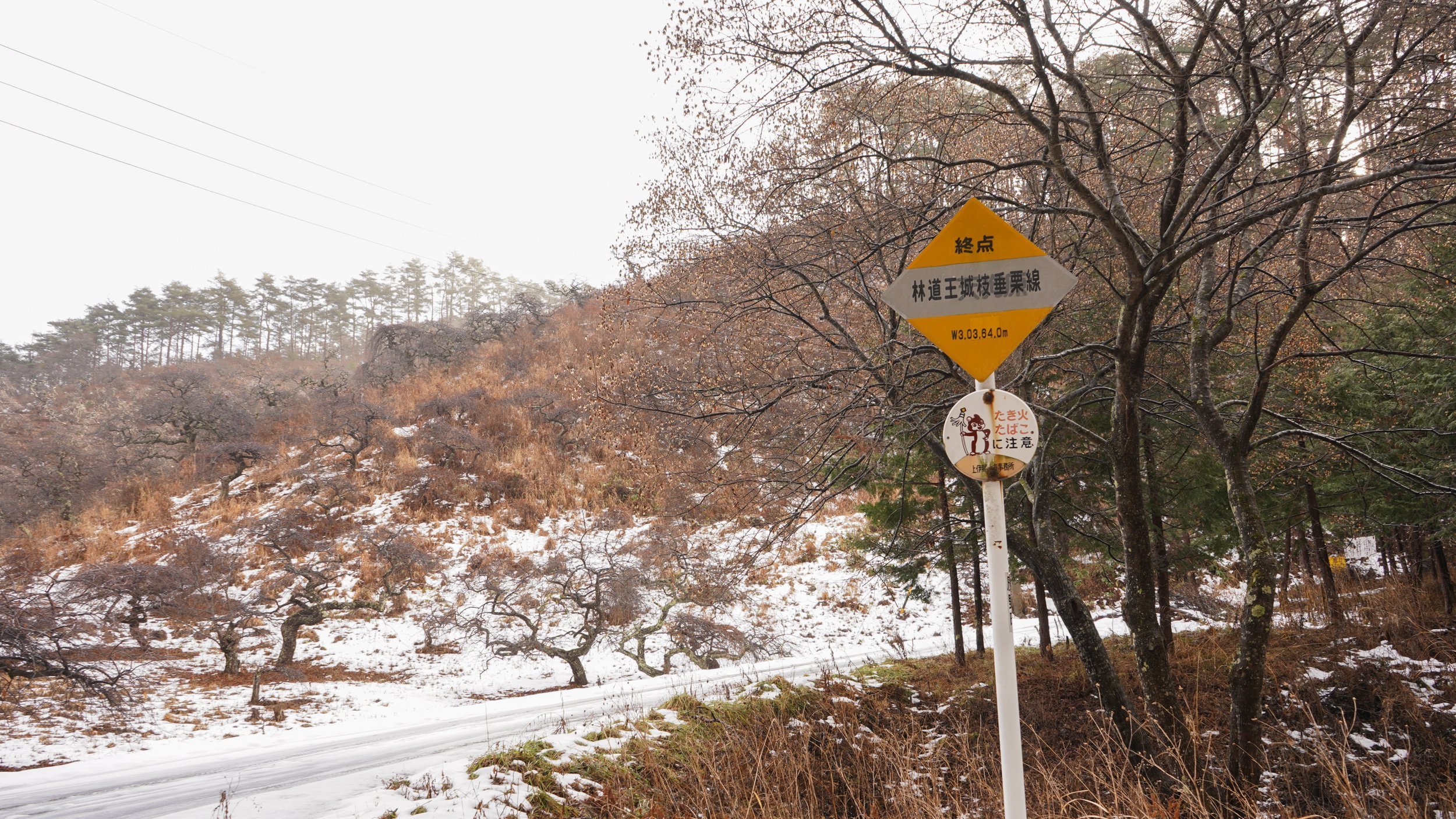 I passed through the forest road and stopped by the Ono district, where was prospered as a post town in the Edo era (17~19th centuries).  One ancient building is preserved and became a popular spot to attract tourists from a foreign country today. This old wooden building is very much worth to “explore”. What a perfect match of name to my bike, Exploro. 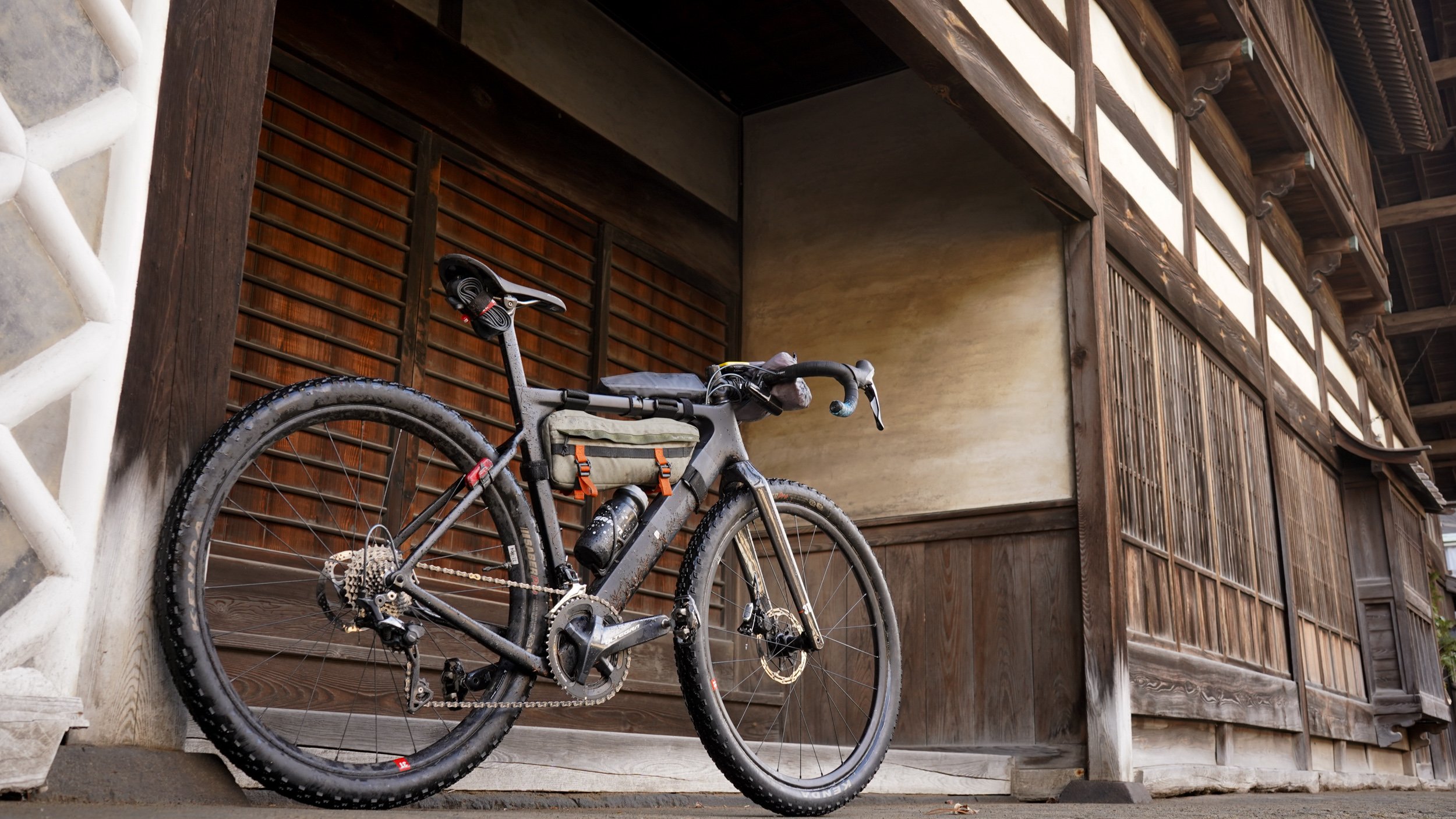 This muddy road is a connection between rice fields from Ono to the Kawashima district. 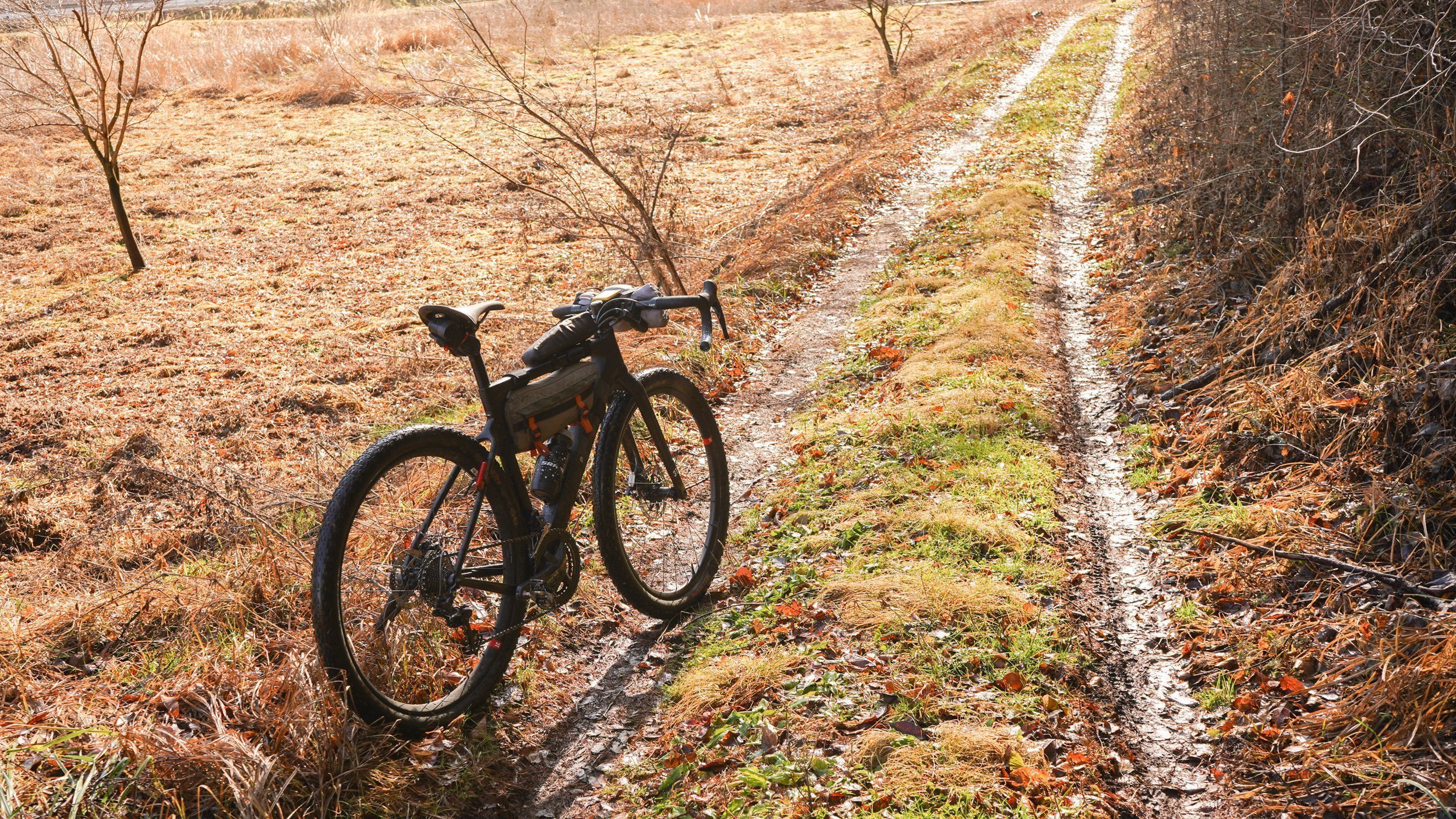 I was once again back to the pavement.  The Yoko river is described as a large snake. The beautiful scenes along the river bank made several mysterious tales, which also brought fame to this river. 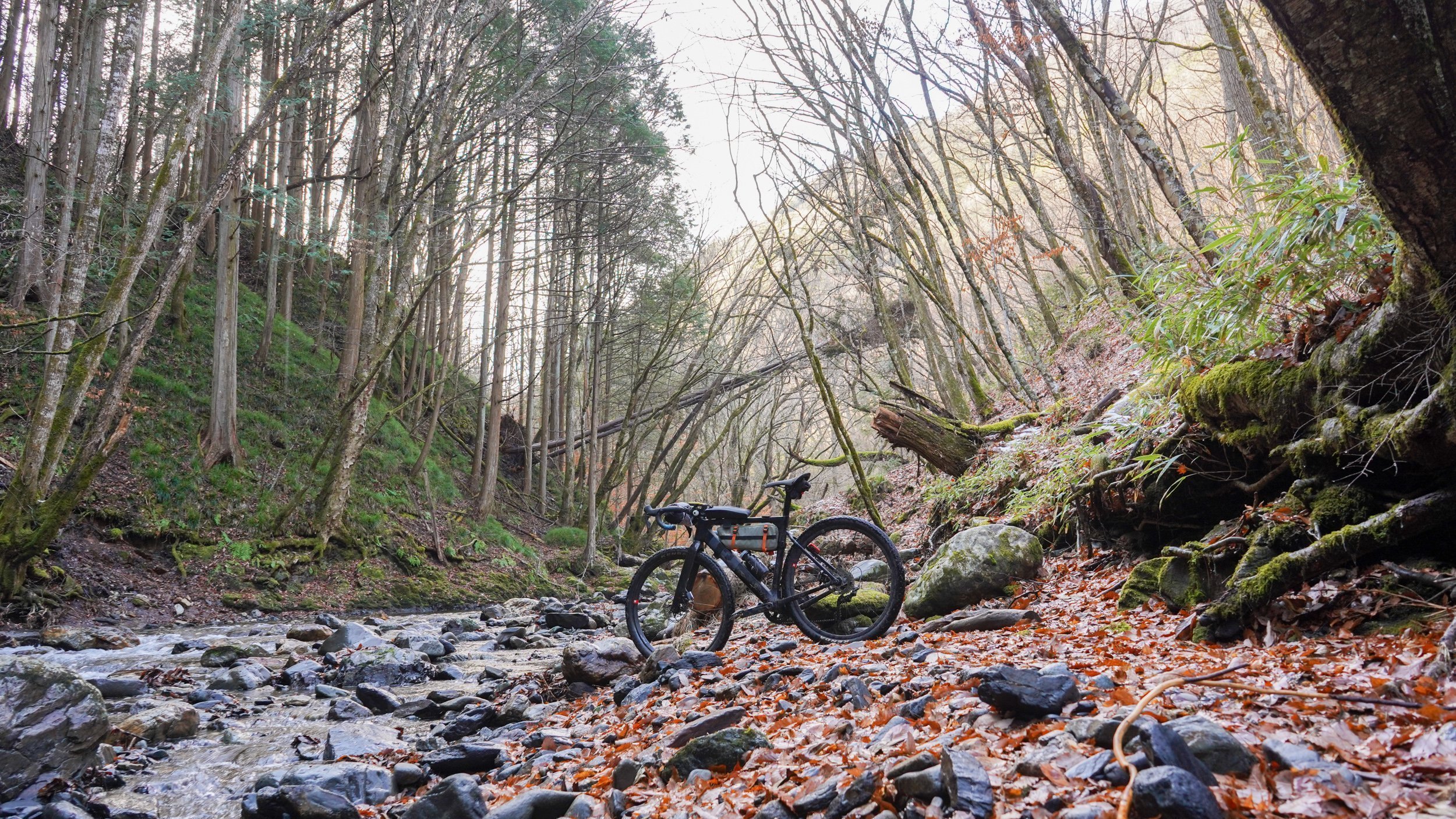 The space that only makes a sound that the person coming for a BBQ and having a swim in a river is much Yokokawa in the summertime, but the river merely drifts to without the shadow of a person concerning the New year’s eve.

In a path connected in a national highway following from Jaishi of Yokokawa to downtown heart, there is the thatched hall which is a hot spring and meal facilities.After having played in neighboring hills and fields, enter the hot spring; and on the way home. It is the constant seller of the forest road ride that says this. 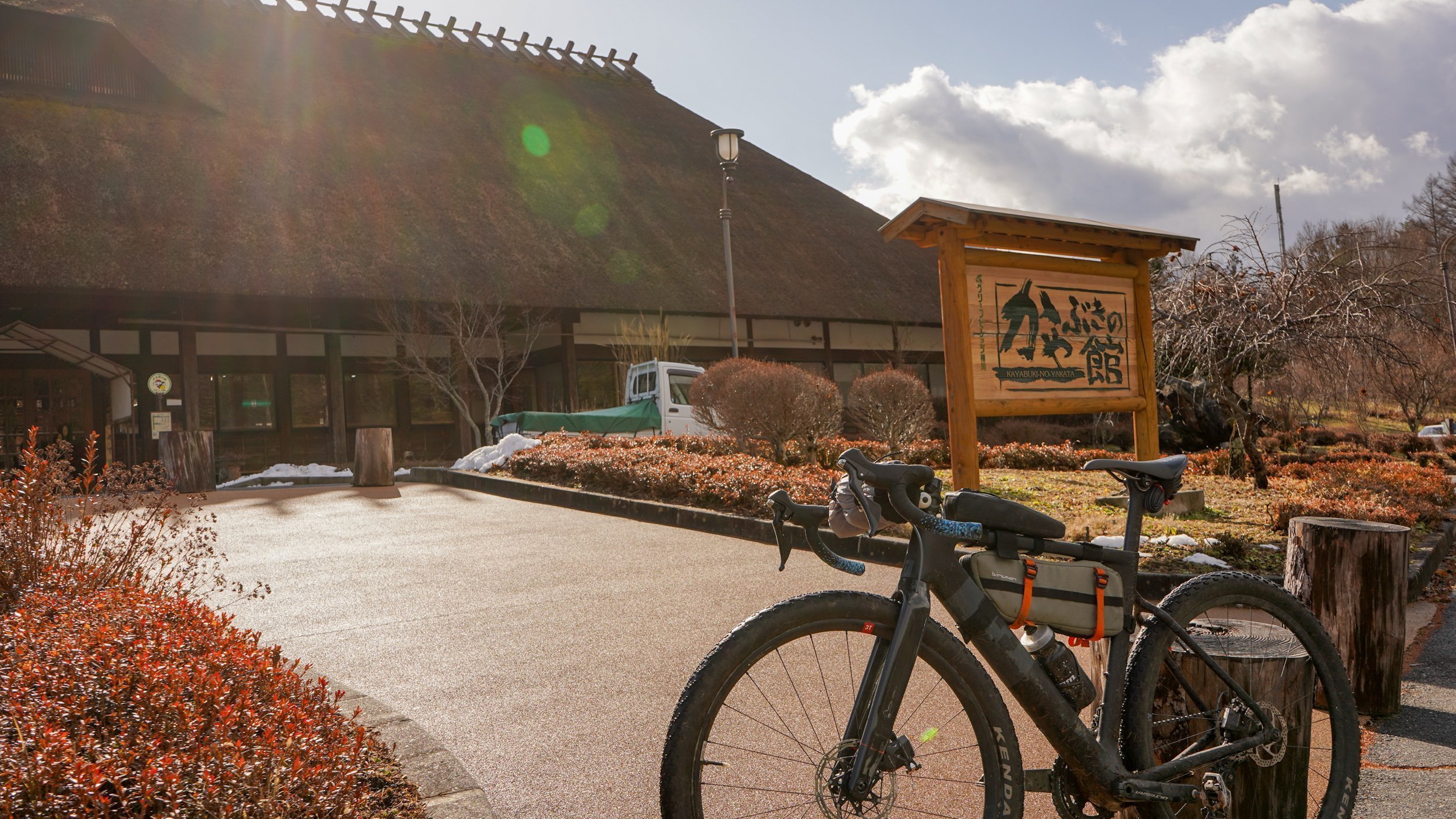 The mileage is 50km, acquisition 1,000m above sea level with the loop from the parents’ house. Approach is good from the JR station, and a route is a closing forest road at around 70km even if I started from Chuo Line Okaya Station of the limited express stop.