The 7 Wonders of the World or the Seven Wonders of the Ancient World is a list of remarkable constructions that mankind ever made. For thousands of years, the largest structures on Earth were pyramids, Red Pyramid in the Dahshur Necropolis and then the Great Pyramid of Khufu, both in Egypt. Khufu is the only one of the Seven Wonders of the Ancient World that is still remaining. Even in the modern days now, the inspiration from Egypt or I would say the Pyramid, has never ended. From Louvre Pyramid in Paris to Luxor Hotel in Las Vegas, then we have Pyramid Arena in Memphis, Walter Pyramid in Long Beach California, and the most known to us will be Sunway Pyramid Shopping Megamall in Malaysia.

Mr. Go, the founder of GOOD “Go Originality Design” was kicking my ass for 2 weeks, for not able to decide the design concept for my new 3T Strada. Have you ever imagine yourself riding a golden bike on the road and getting all the attention from everyone? Yes, bring my bike out to get the feel of it.
Some people ask me, what makes me go with Egyptian Design for the new bike? Yes, to me the criteria for a new bike must be:

1. Stunning
2. Gold in color, perfect match with the Egyptian Design

When you love your bike, love the design, you will have every reason to ride on it all the time. Thanks to the wonderful RTP “Ready to Paint” program offered by 3T, to allow me to own a bike that is fast + eye-catchy.

Big thank you to Mr. Go who is behind the development of this stunning bike. It is fun to watch him cracking his head on the artwork, masking and painting the bike, and all these come with lots of yelling, cursing, sweating, crying and not to forget, smiling towards the end of the project. 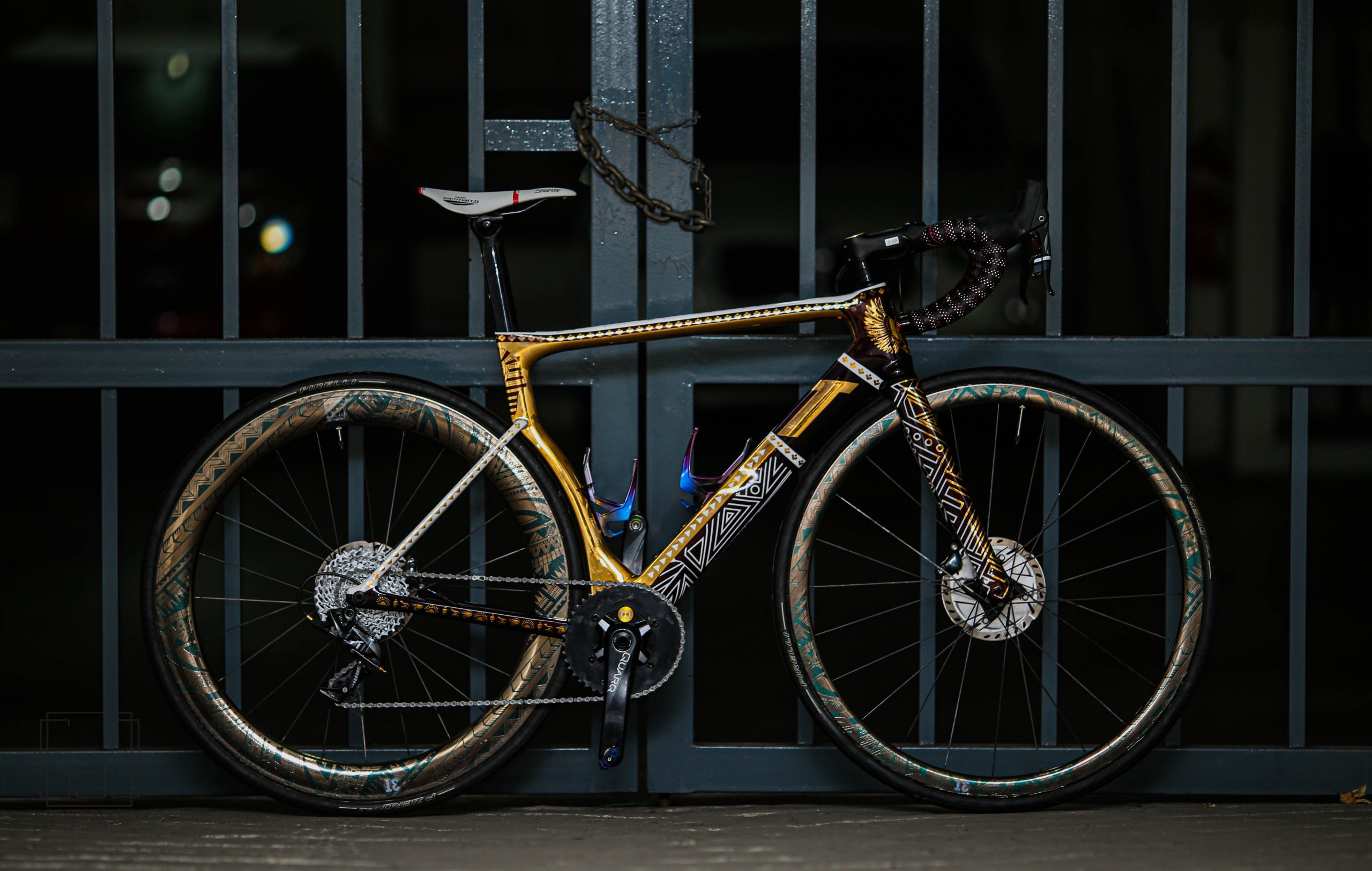 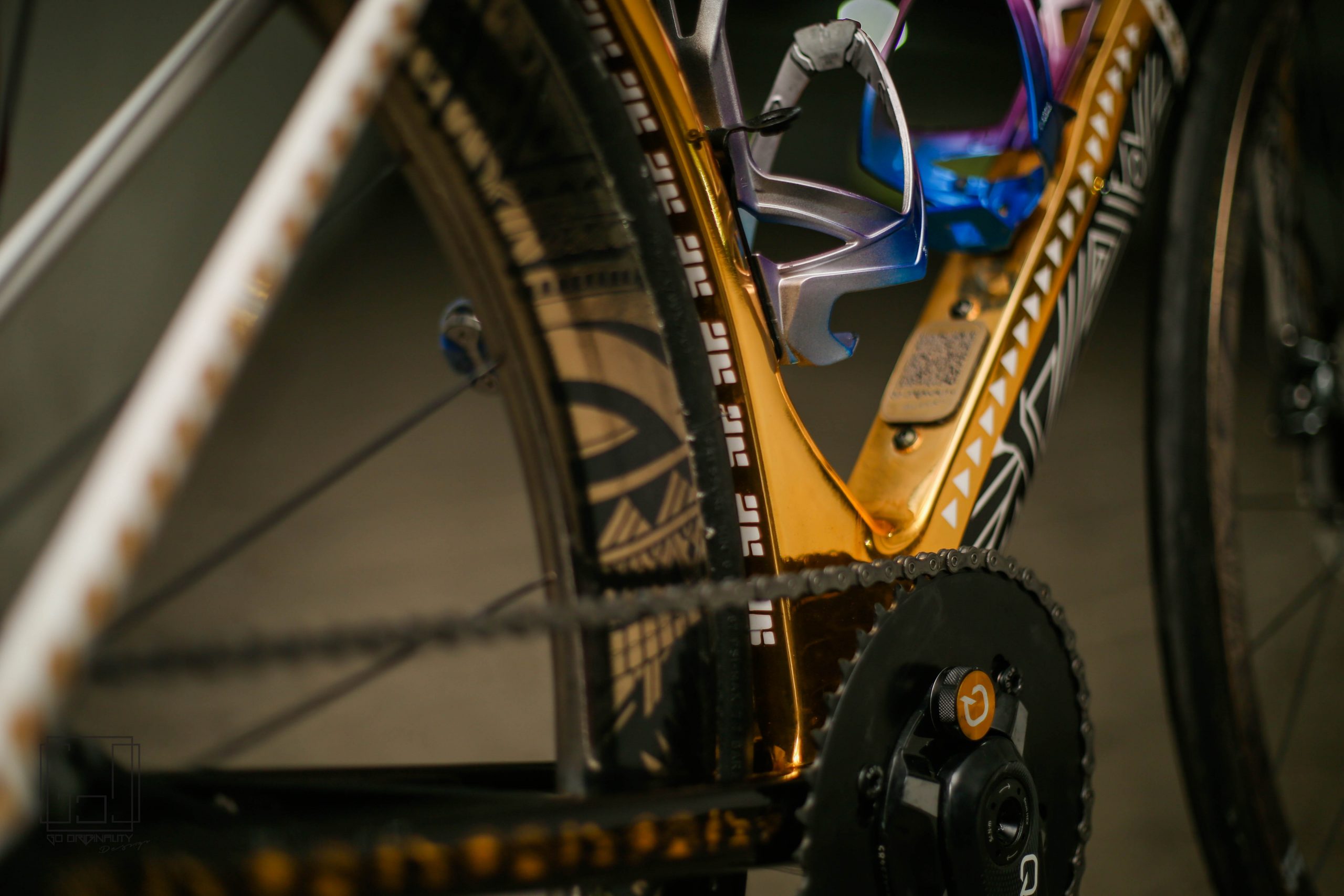 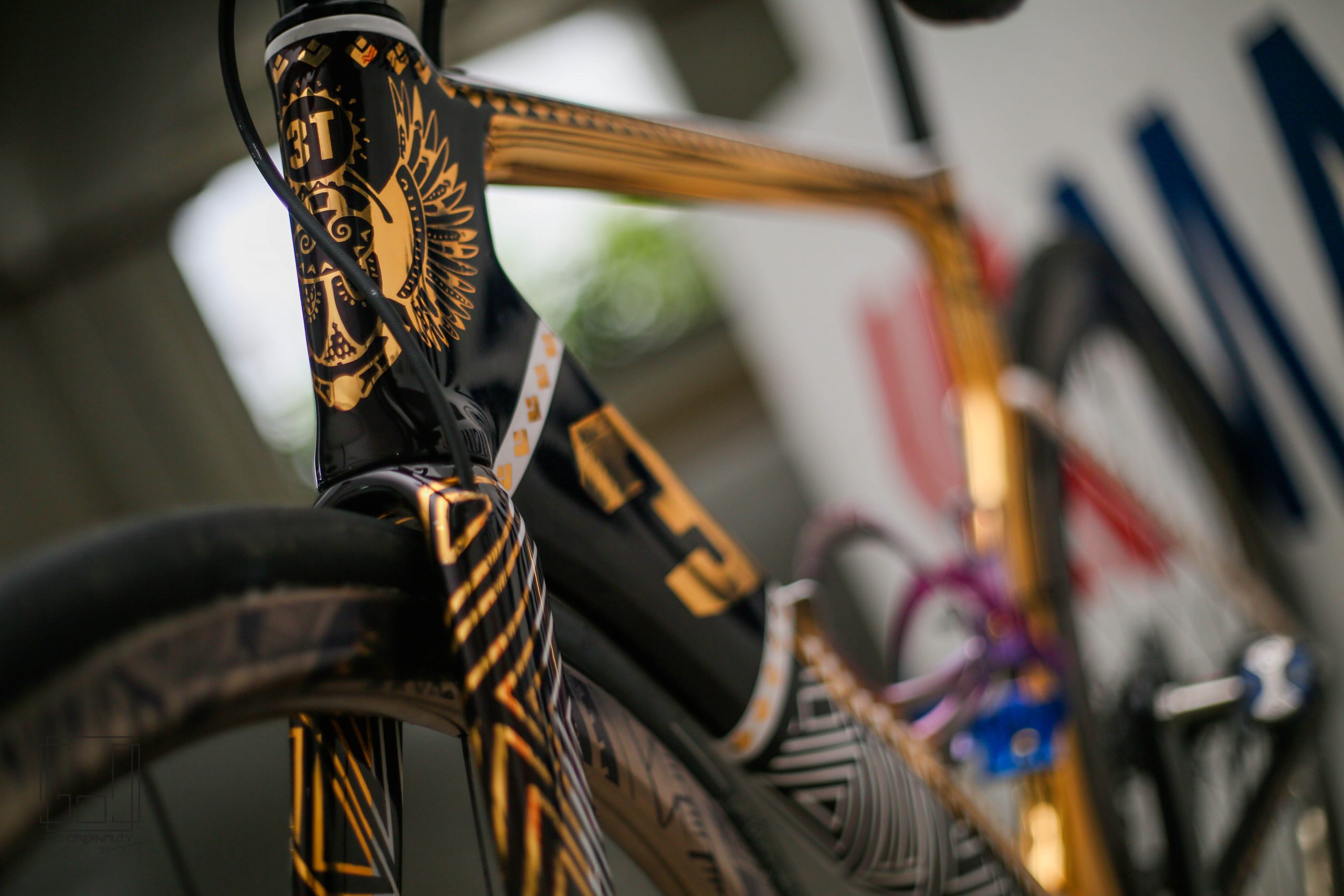 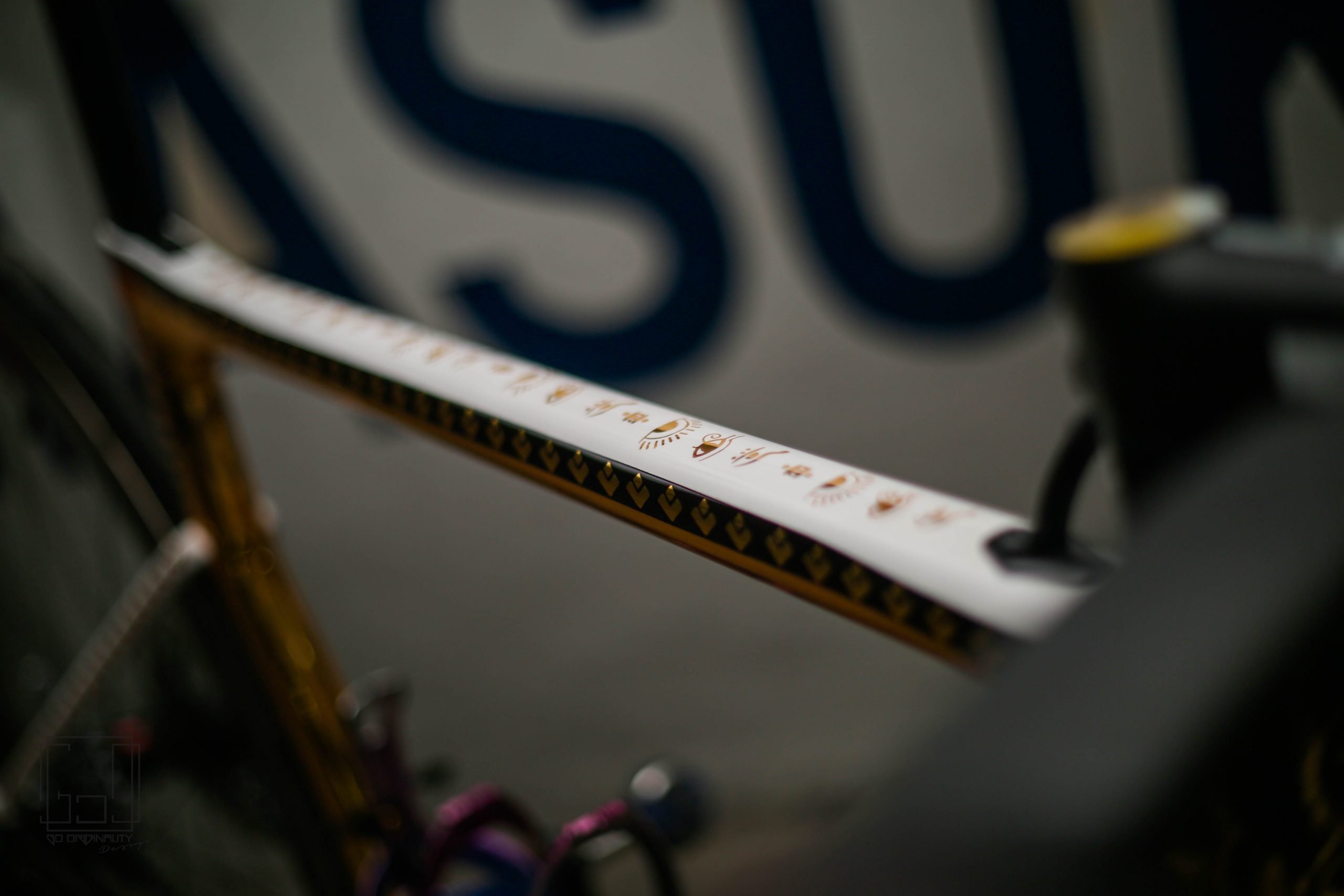 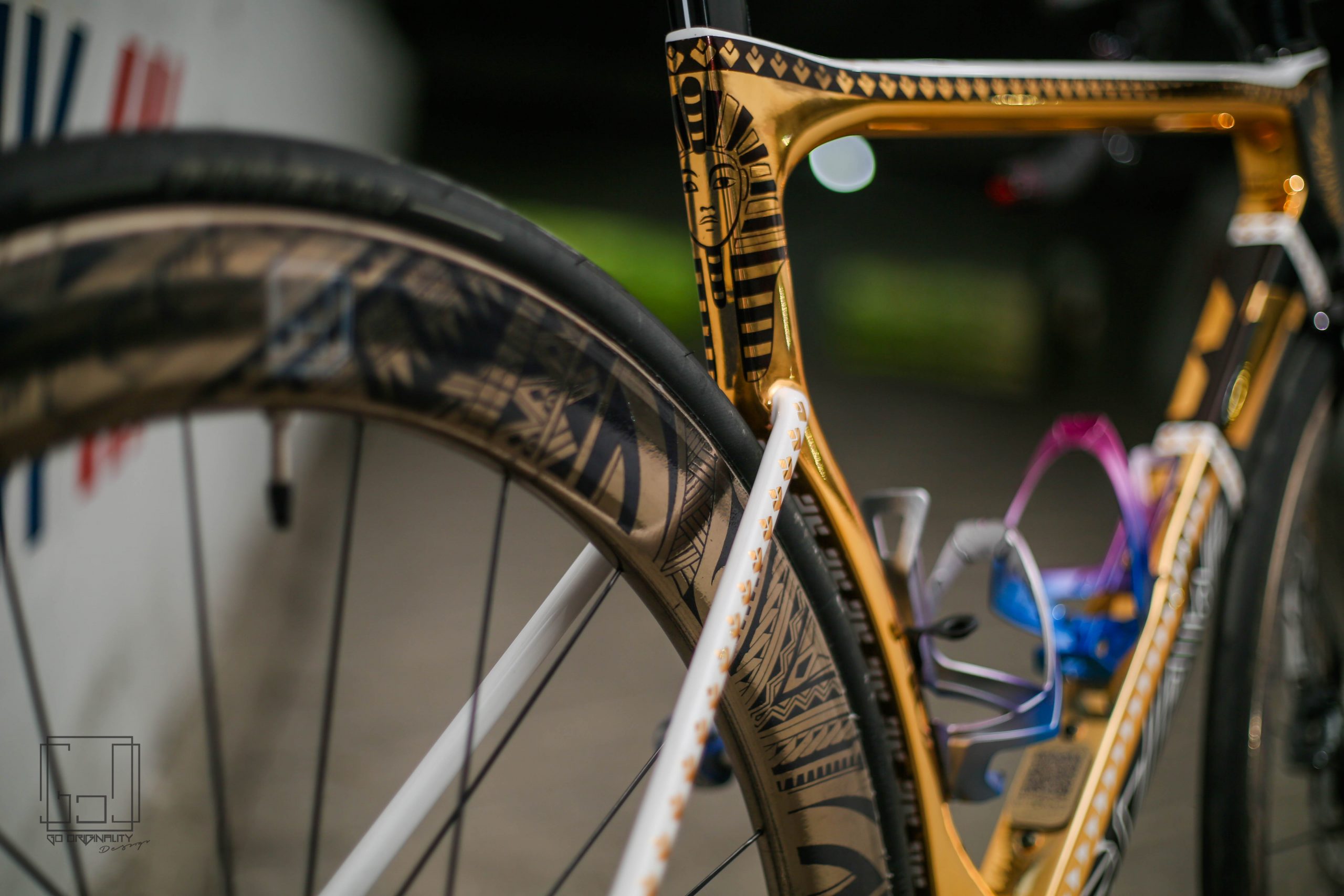 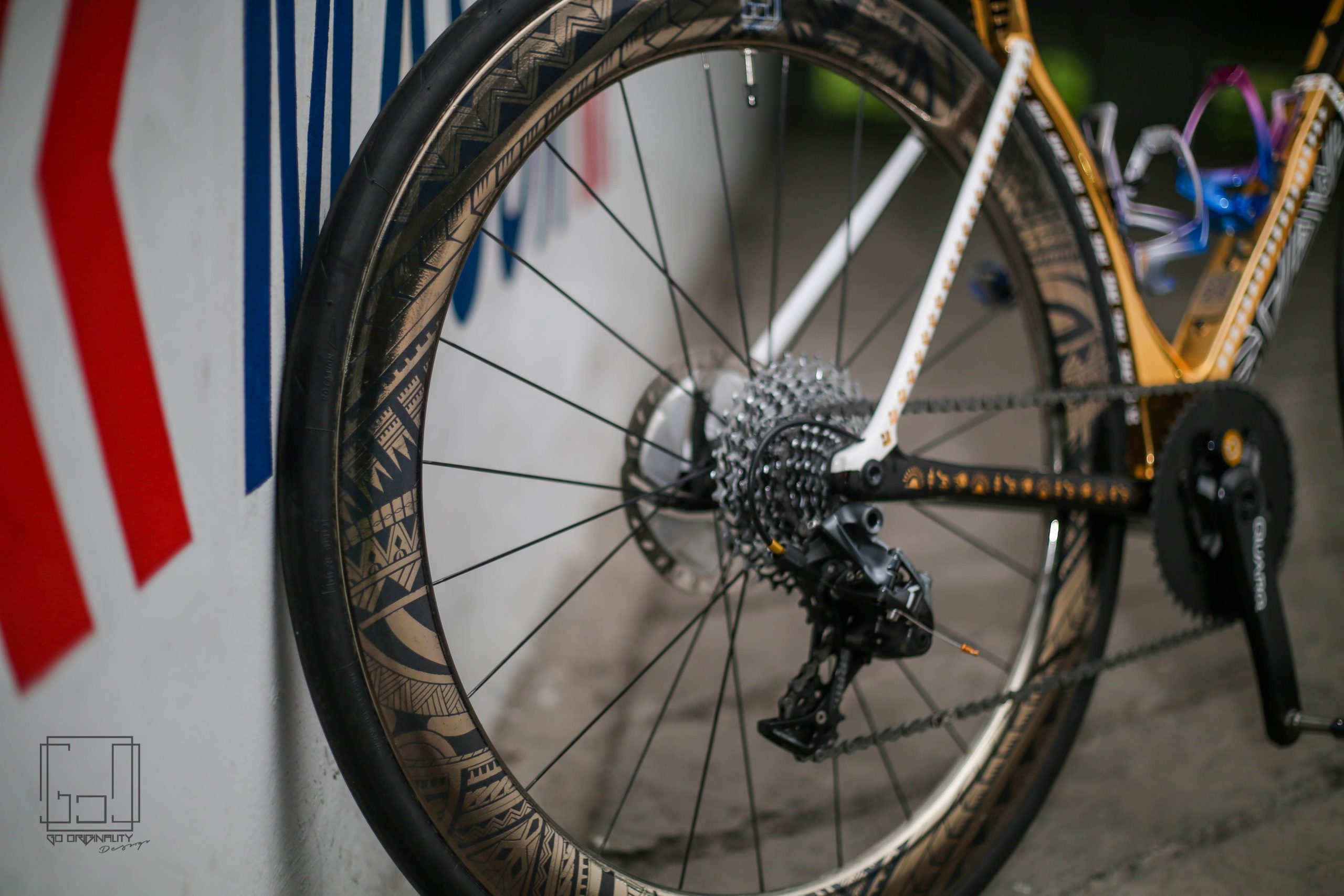 Enzo Andrian was born in the year of the horse, same year too when the Enzo Ferrari sports car was released. So what better way do homage to his namesake and to make a bike that looks every bit an Italian thoroughbred. This was essentially how the “ Red Stallion “ 3T Strada Due was developed and design.

Painted with beautiful red candy paint, the bike is a head-turner everywhere Enzo cycles. Two prancing horse was skillfully incorporated into the 3T logo. The horse legs each at an angle of attack like a cyclist in his stride at full power. On top of the frame using gold leaf .. is the actual Enzo Ferrari signature with Enzo Andrian full name. The fork both sides is gloriously signed with his signature too. Everything screams speed.

3T “ Ready to Paint” frames makes it possible for every cyclist to have their personalized dream bikes. Dreams, however, need someone to make it a reality. And that’s where Mr. Go the founder of GOOD “ Go Originality Design” makes it happen. Every detail envisioned by the cyclist was thoroughly implanted with love on to the frame and it shows. A stunning bike that looks fast even when it’s standing still. 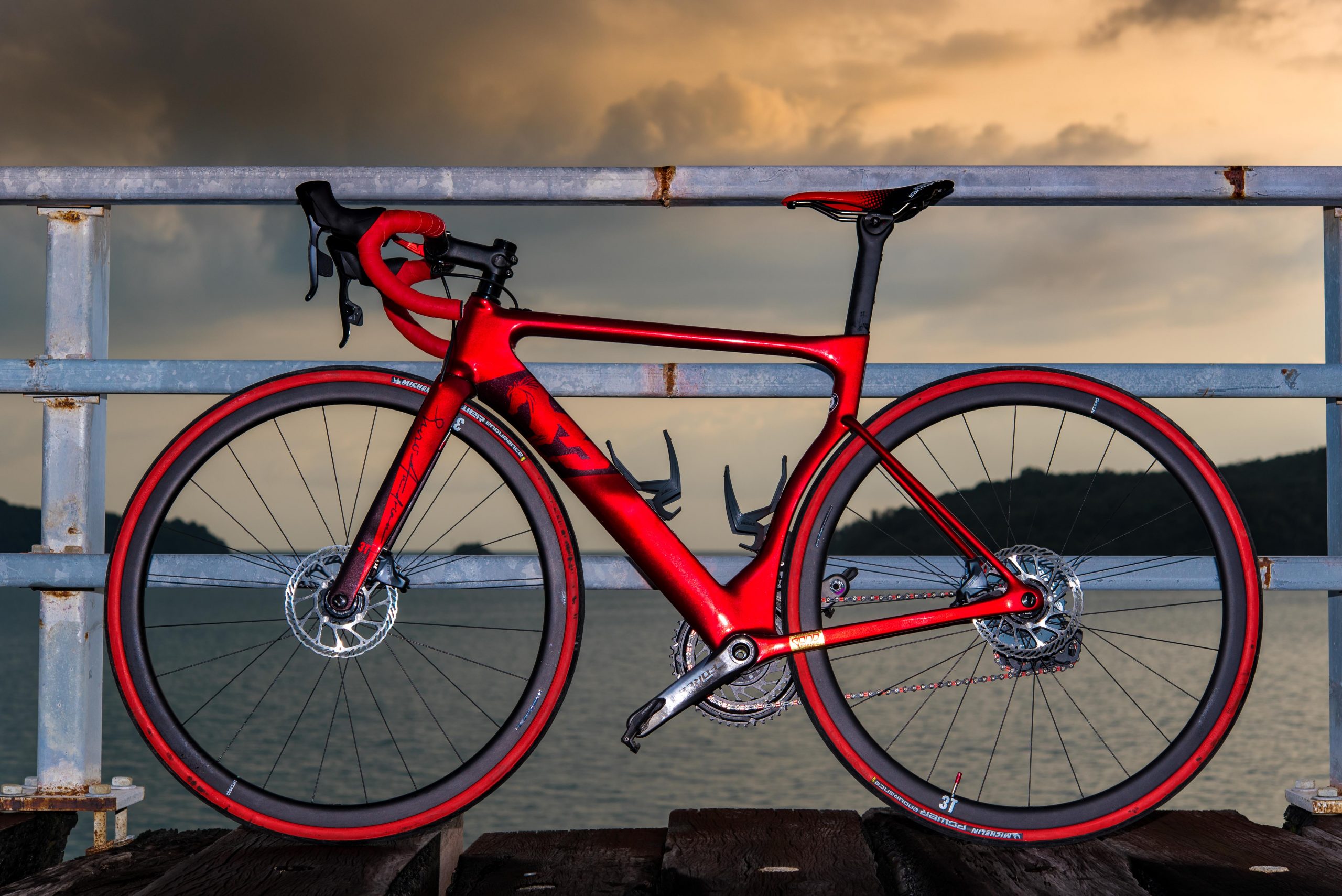 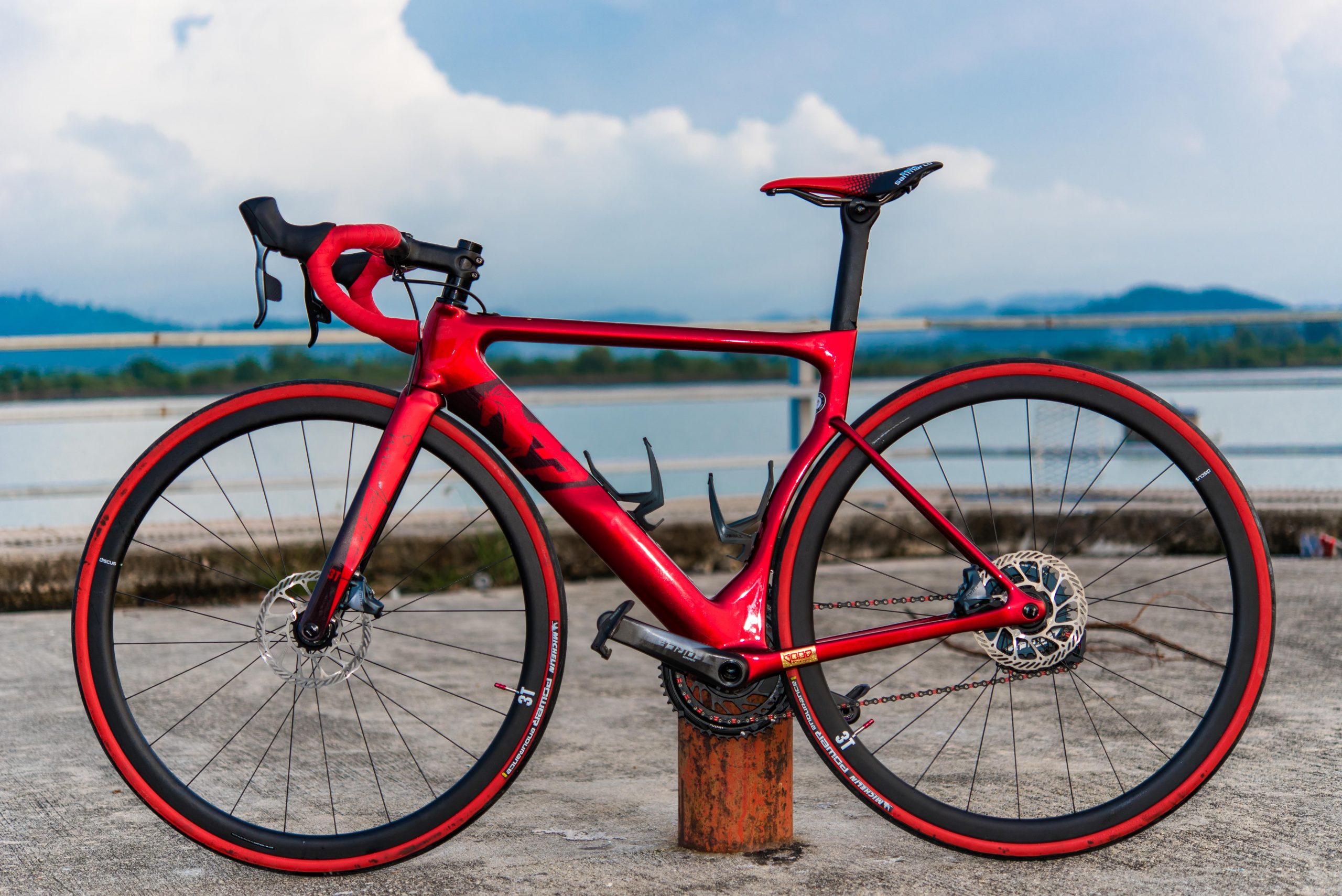 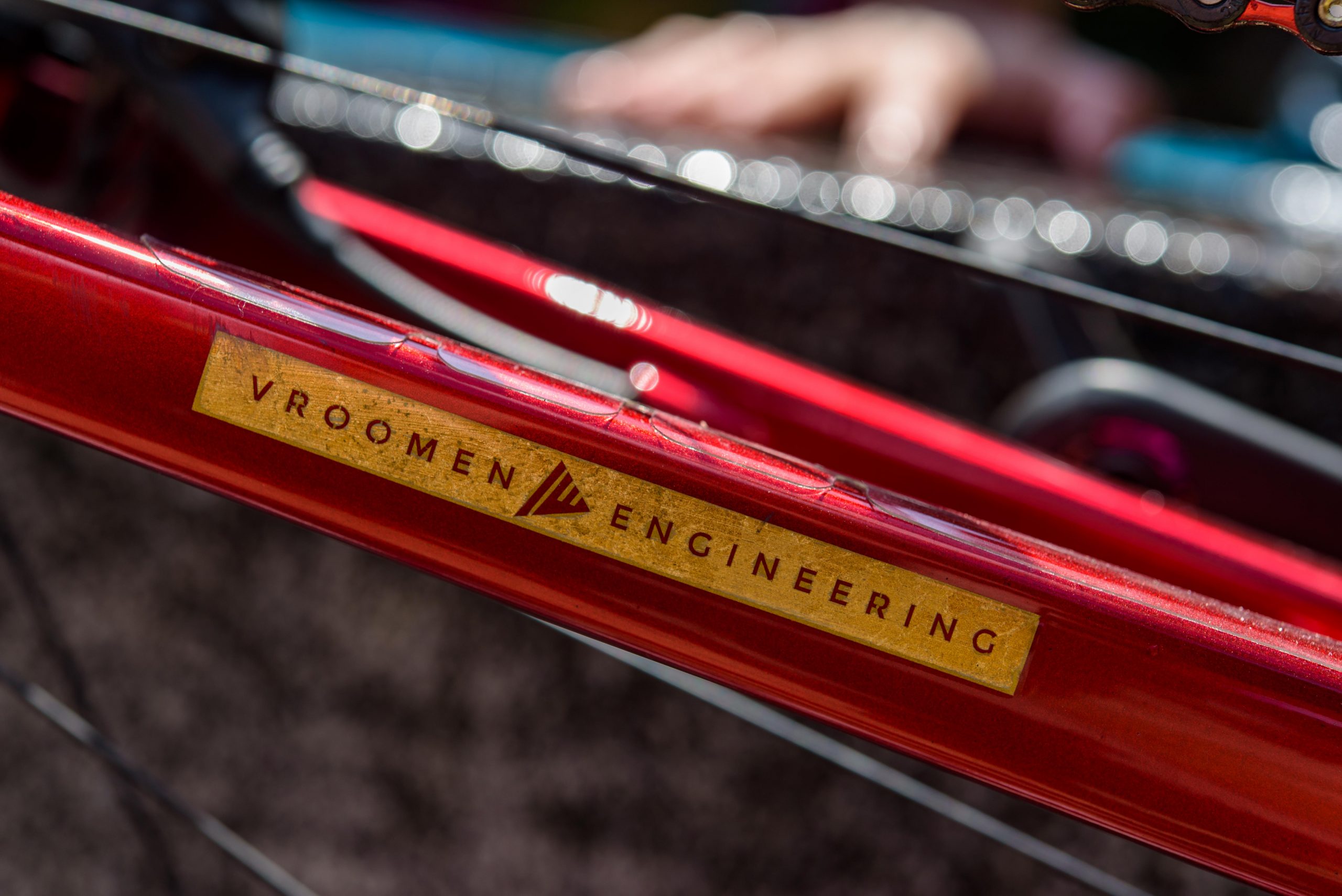 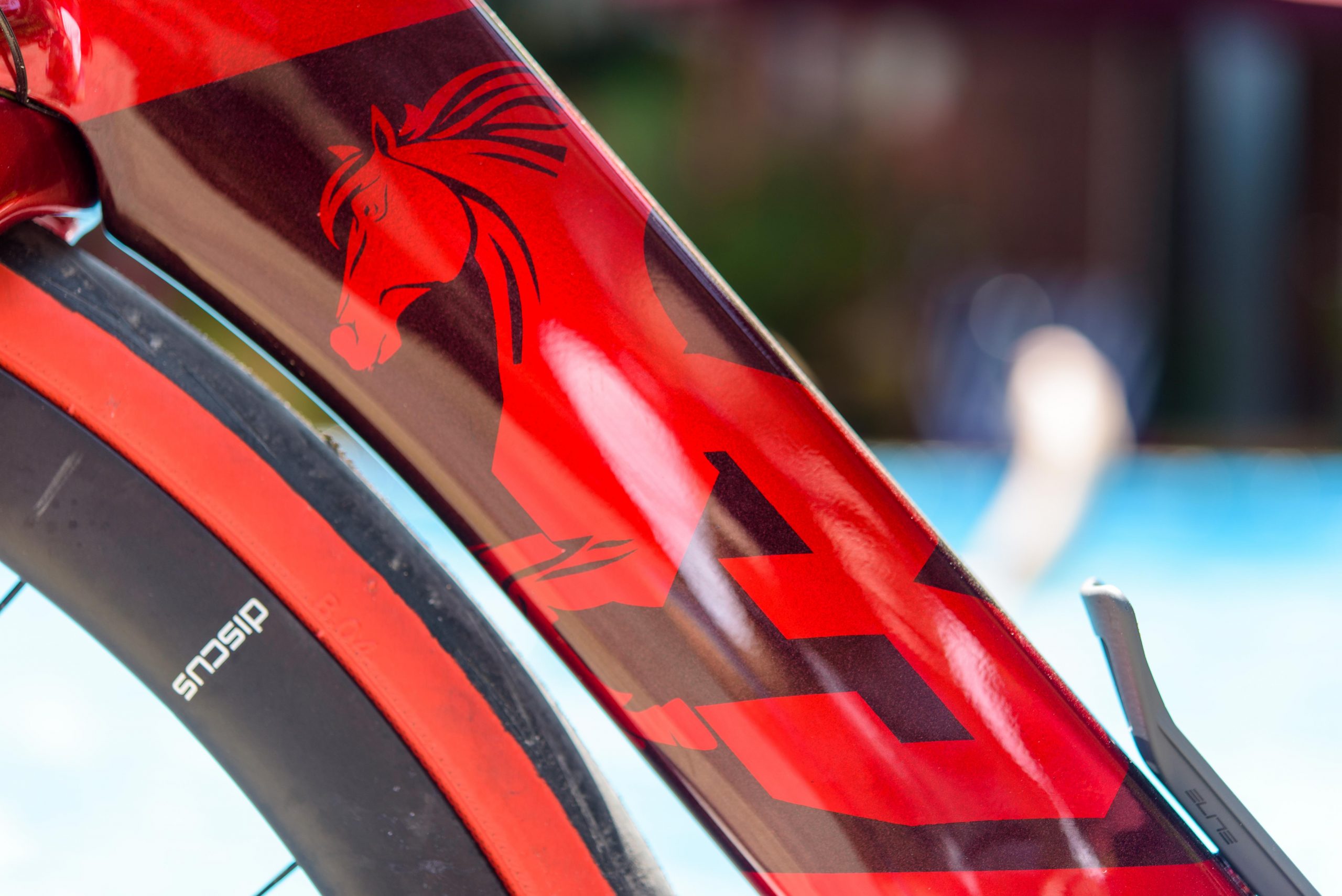 A wise man once said, “I have a plan…. Attack! “. That wise man is none other than Tony Stark or better known as Iron Man. GO Originality Design (GOOD) has done it again and this time in our most beloved superhero character. Inspiration starts from the ARC fusion reactor.

Go Lim’s, the founder of GO Originality Design ingenuity lies in his ability to creatively play with the iconic red & gold color-way in different parts of the frame,  implanting the Arc on the headset, indicates massive power output,  immortalizing Iron Man and combining cycling passion in a form of an Iron Man-inspired design bike frame. 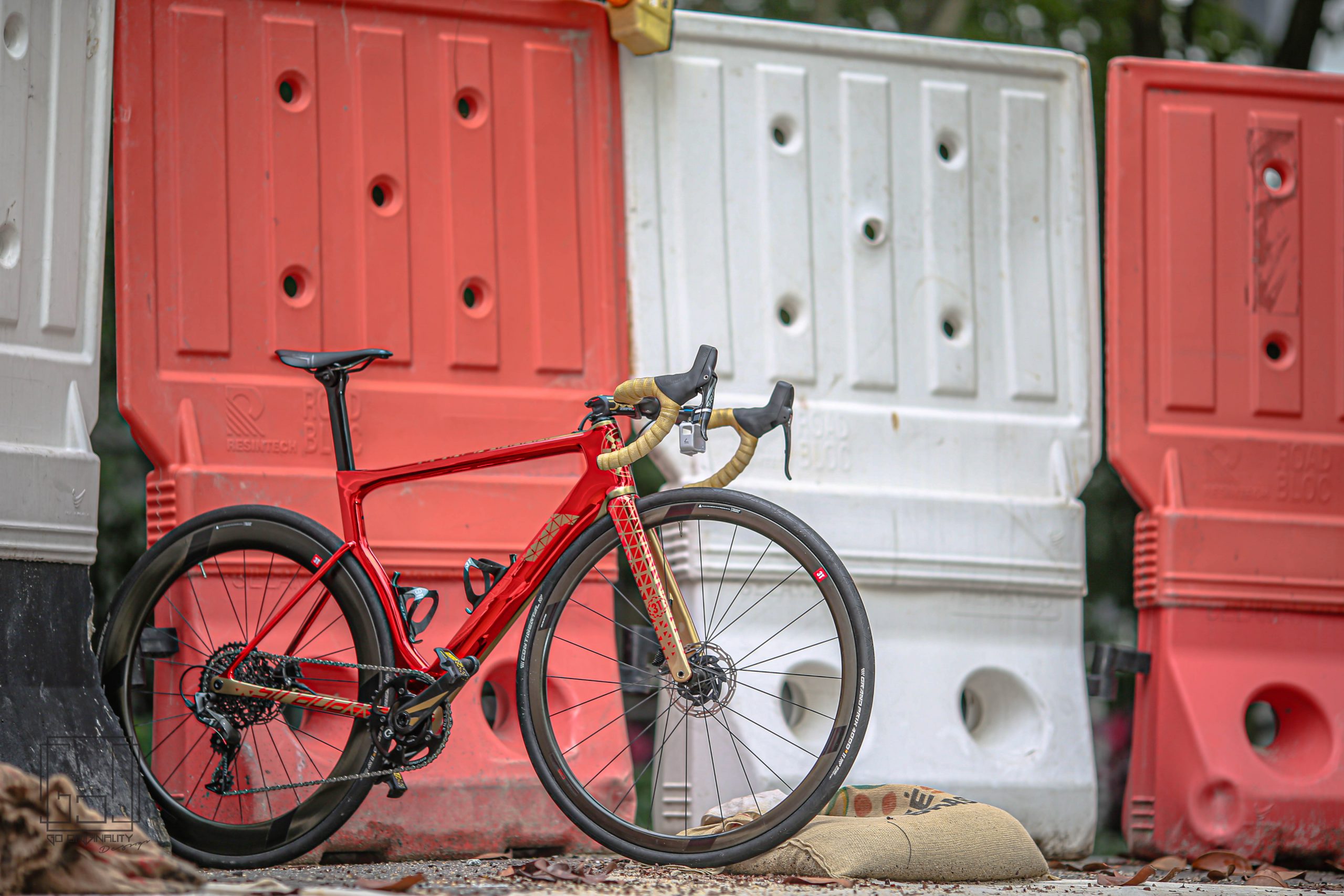 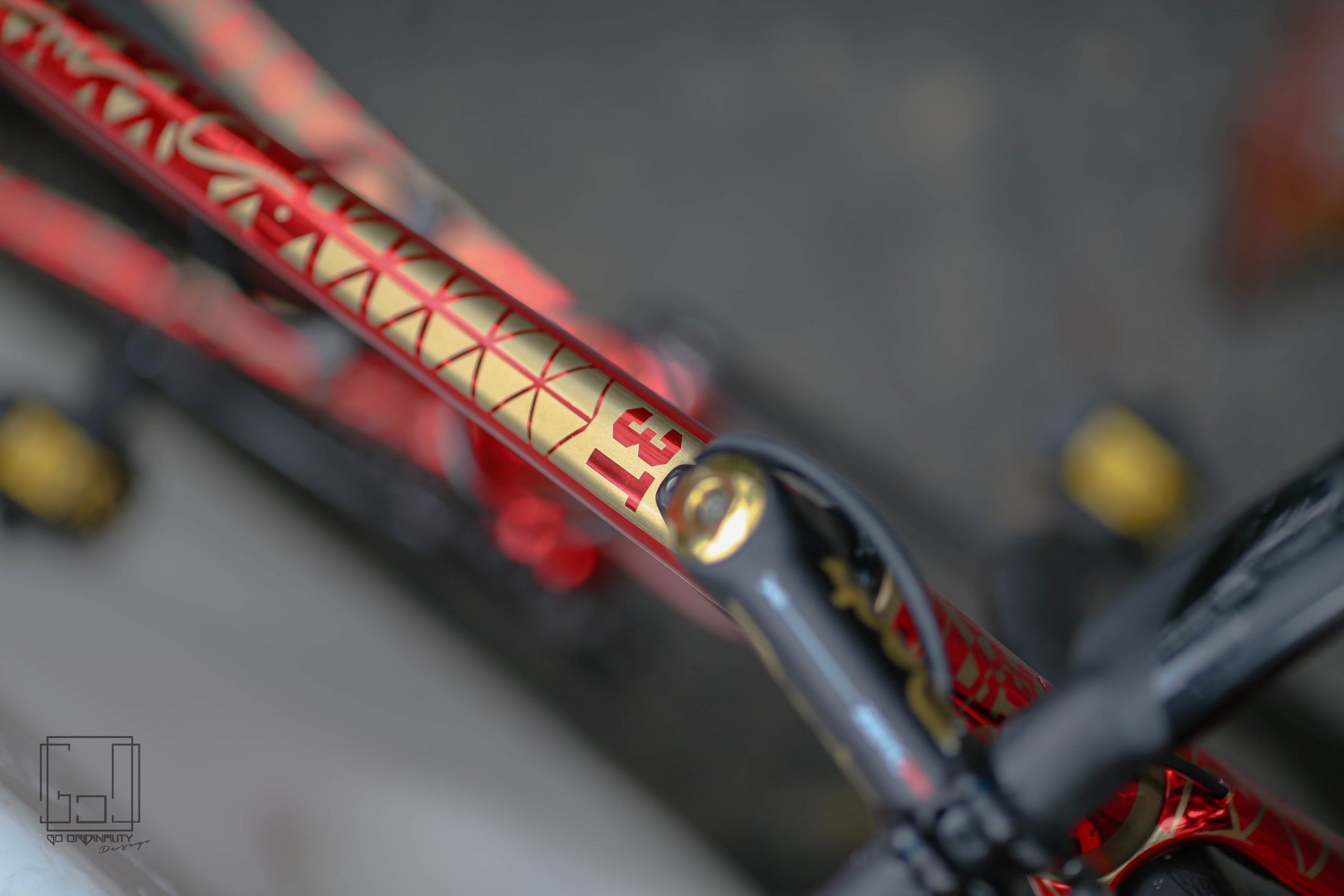 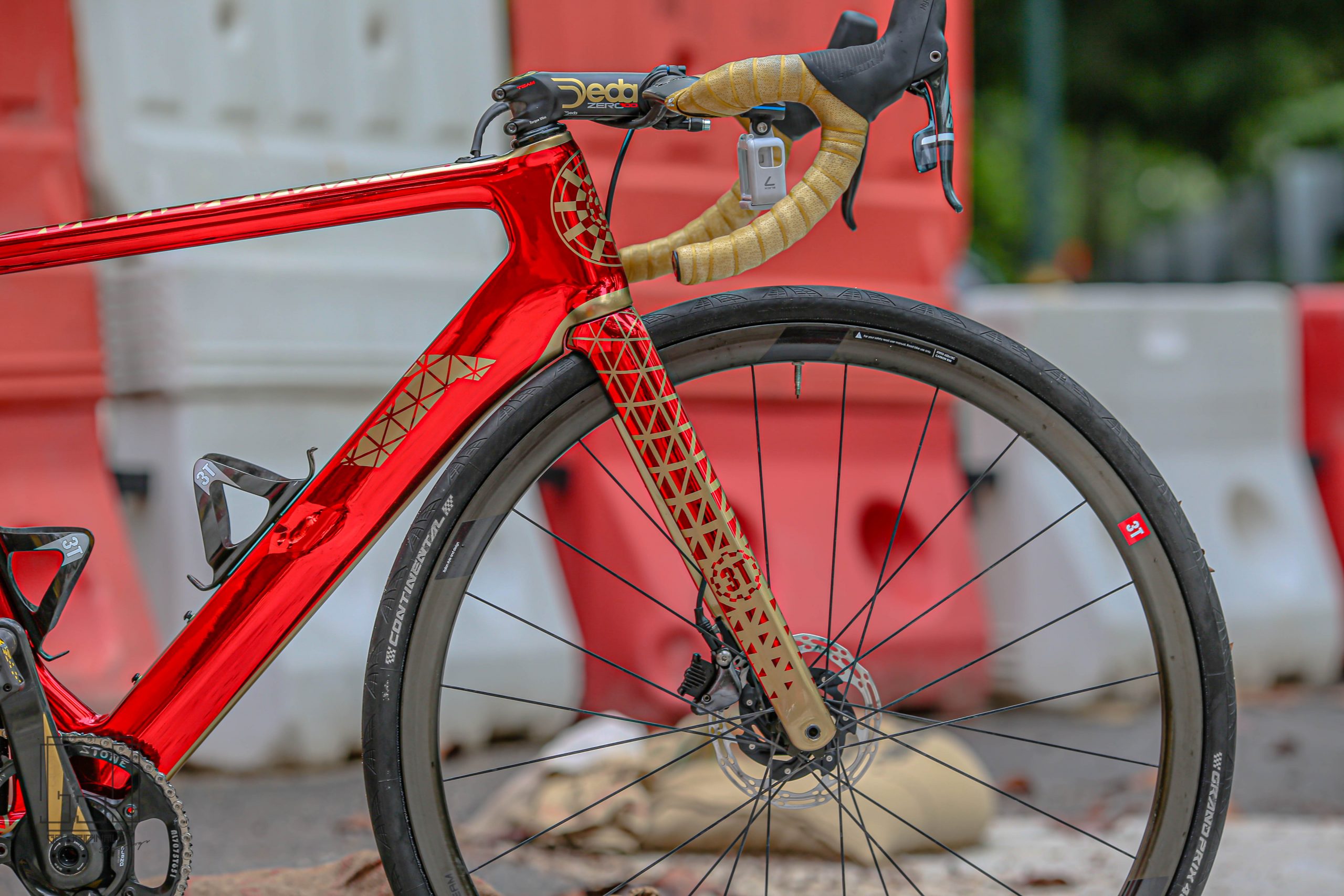 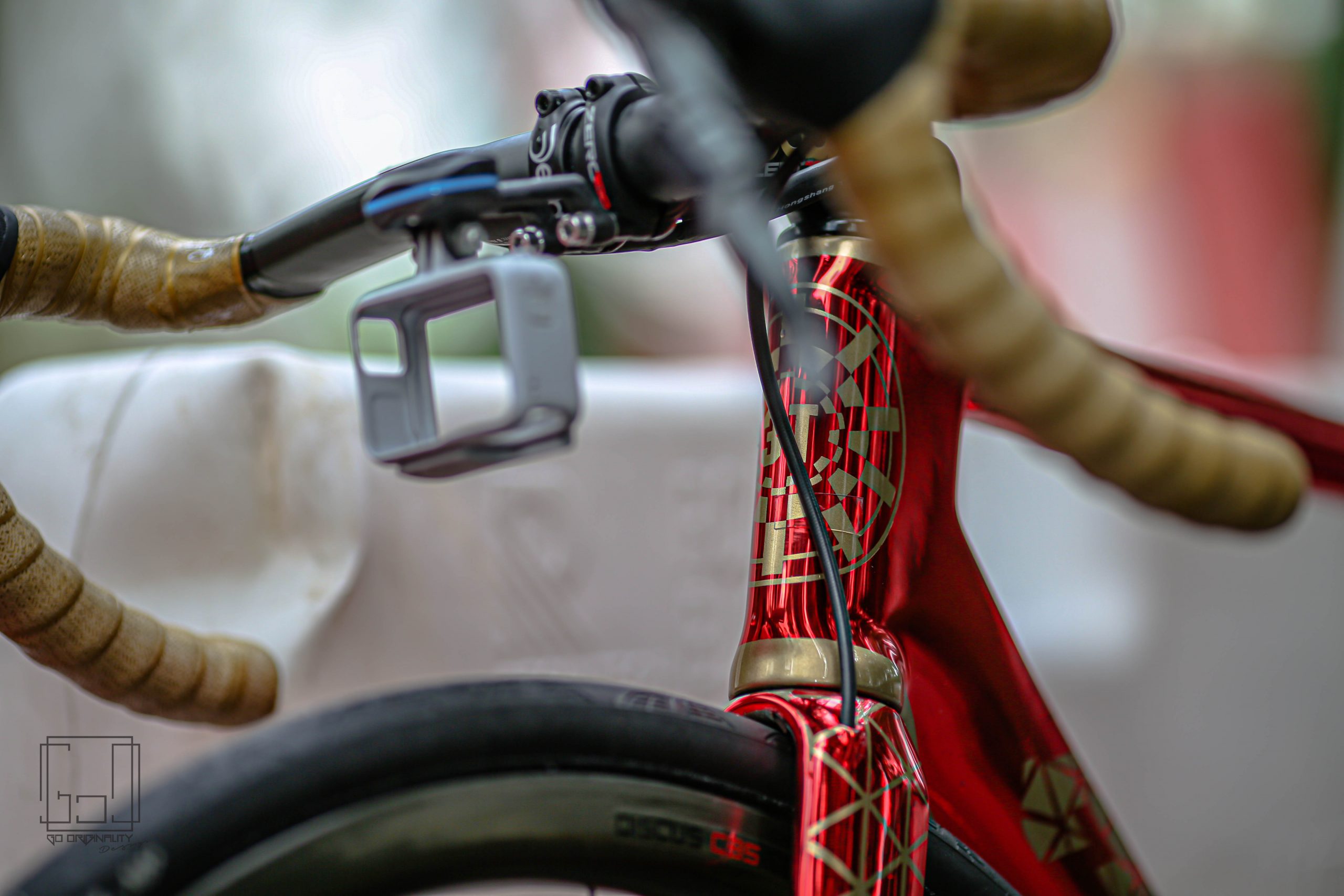 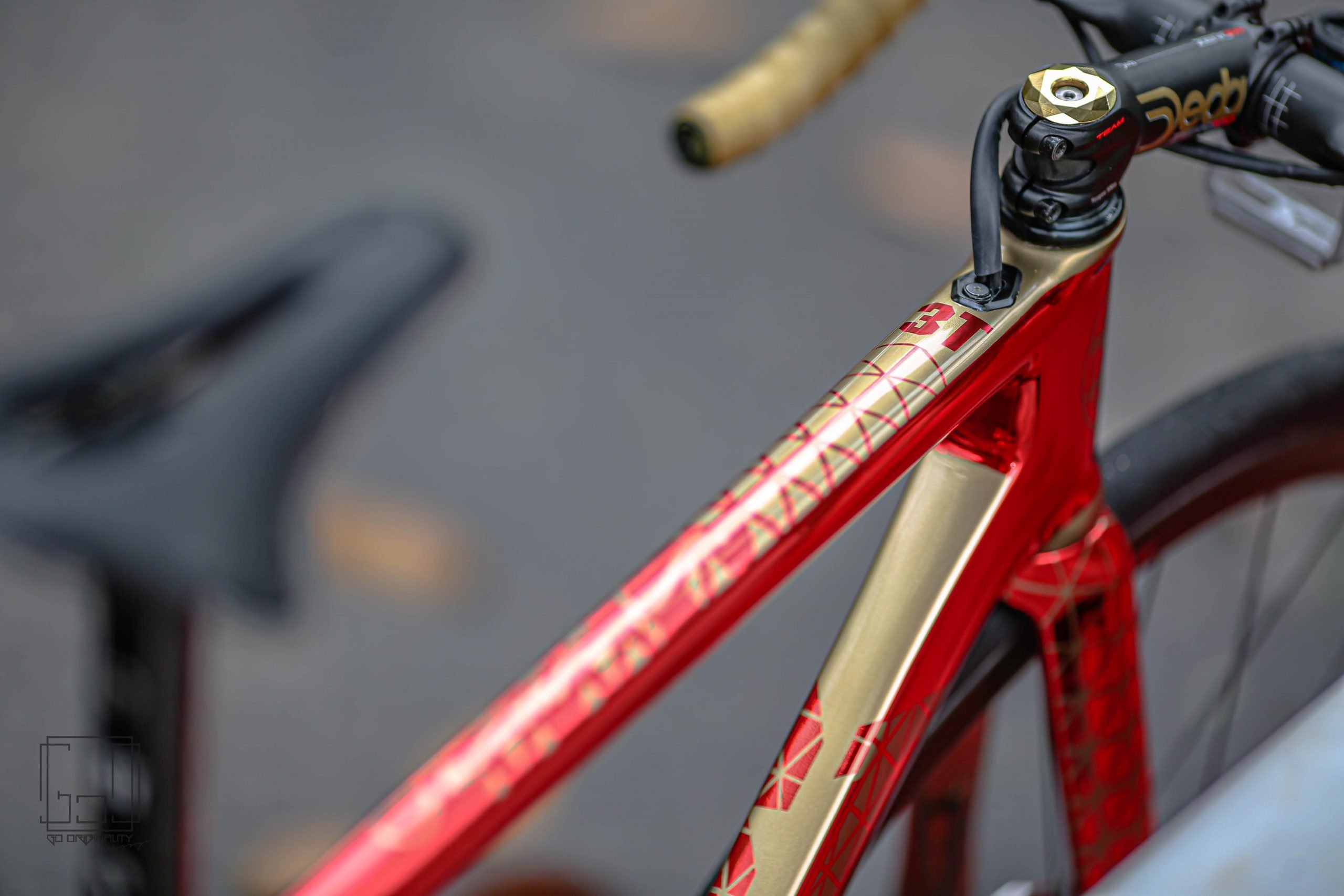 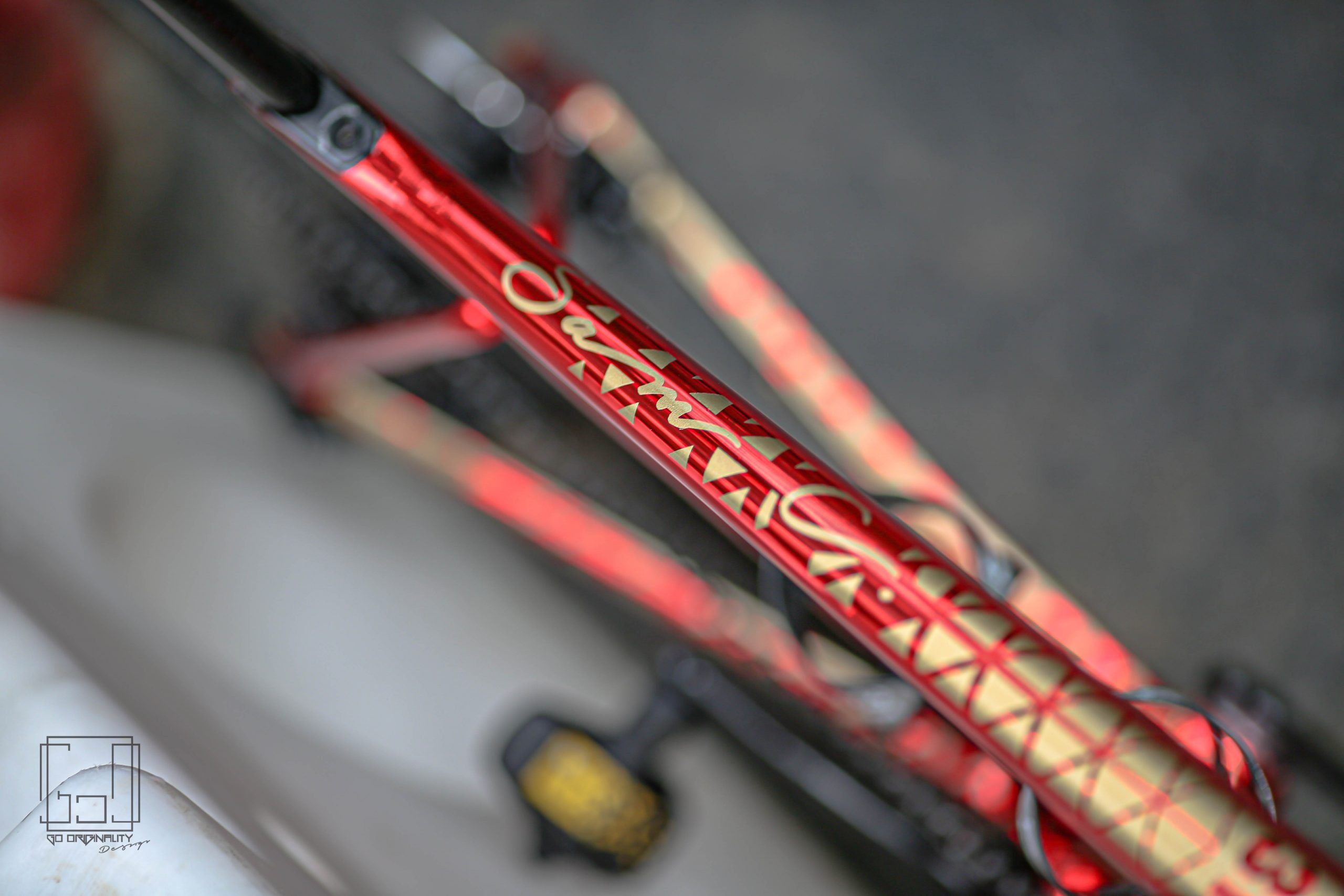 Porsche Macan, Cayman, Cayenne, Boxster, Panamera, 911 Turbo …………….
Mamba 2 Wheels. Yes, this is the name of this bike.
Mamba Green, love at first sight when I visited Porsche showroom some months back. So, let’s do it, create the 3T Mamba!

No fancy design, no striking colors, Simplicity is My Way. Inspired by the world-class engineering of Porsche, which I believe my 3T Mamba will carry a similar aerodynamic profile and racing capability. Do not judge a book by its cover, let my 3T Mamba show you the true speed we can do. 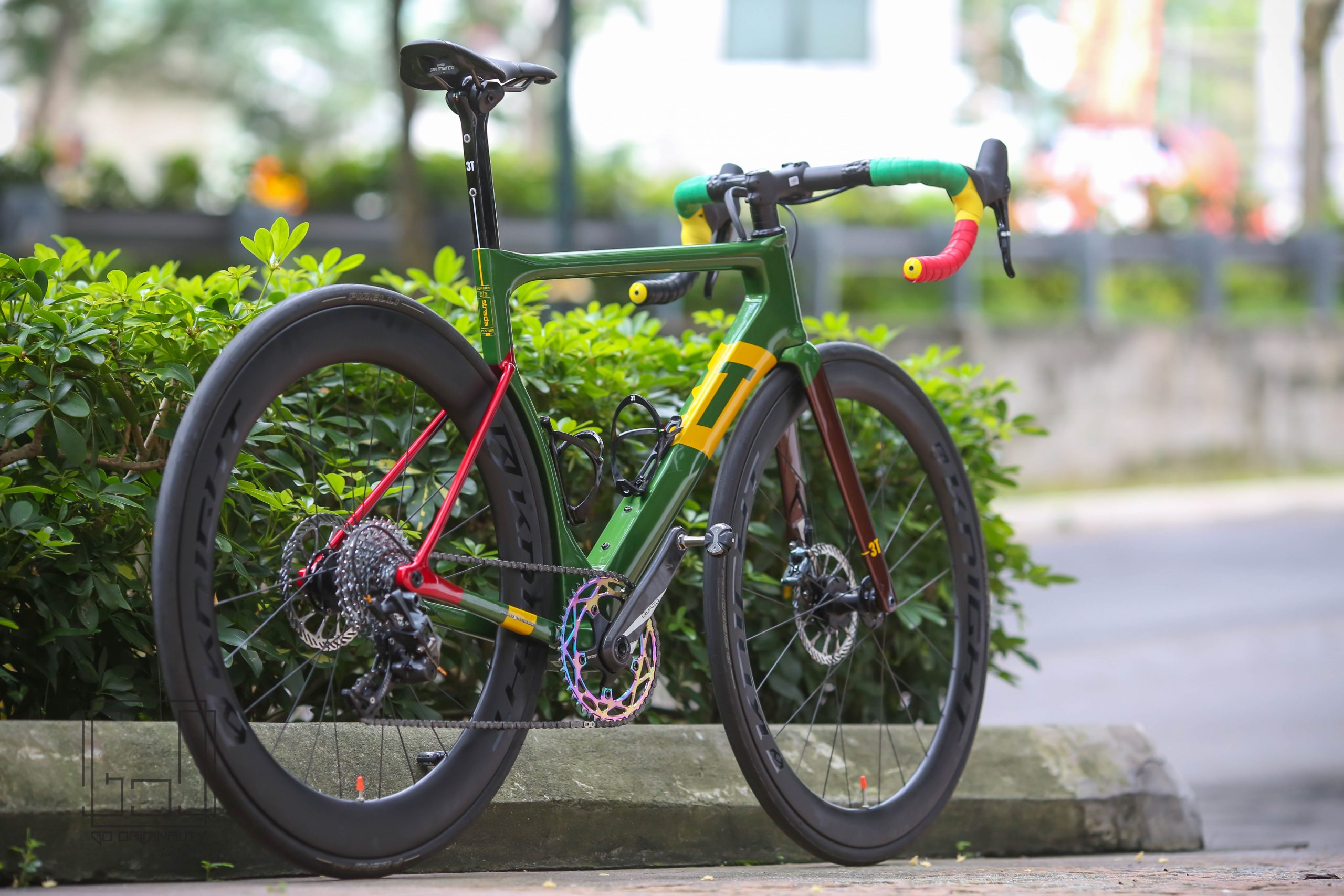 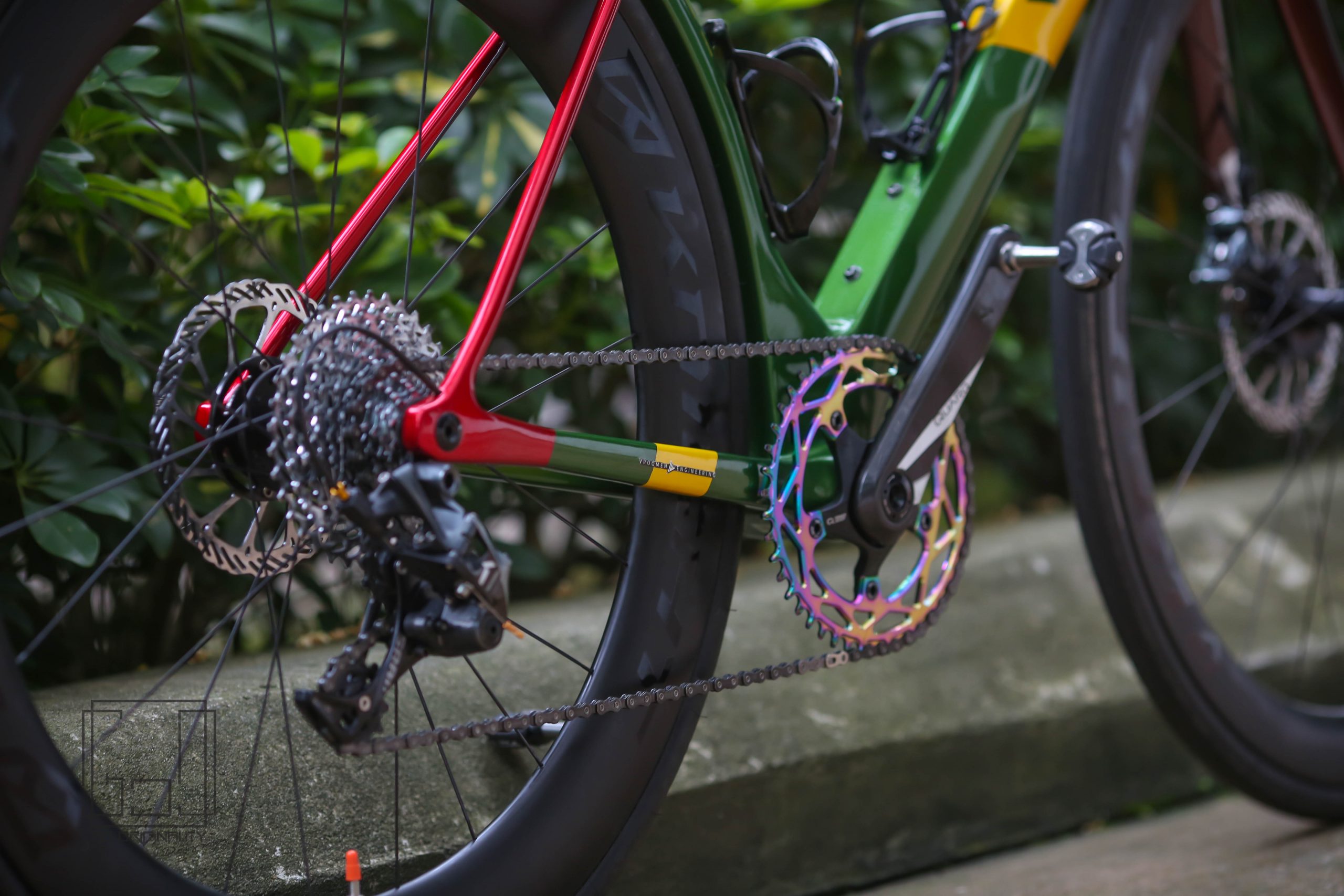 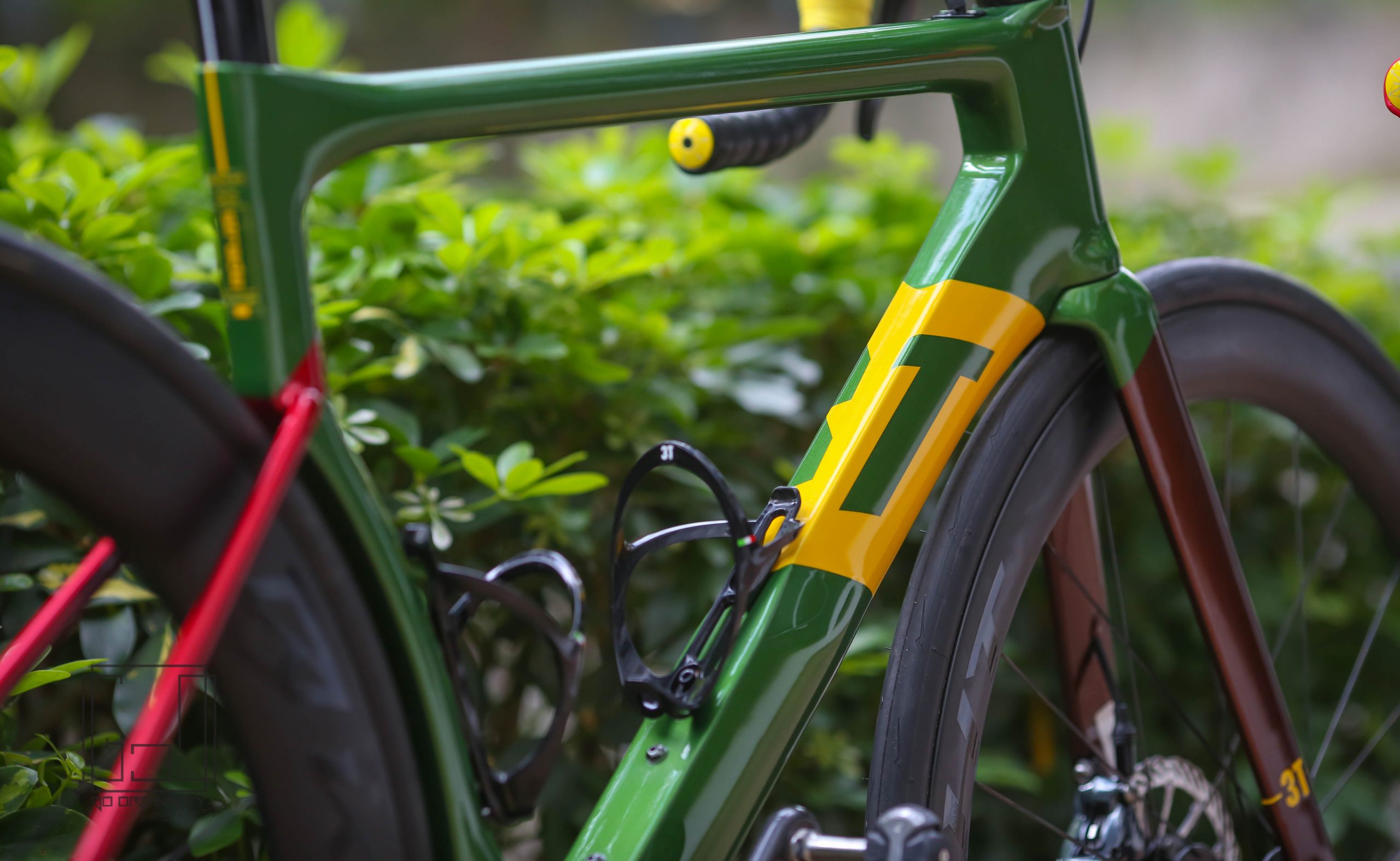 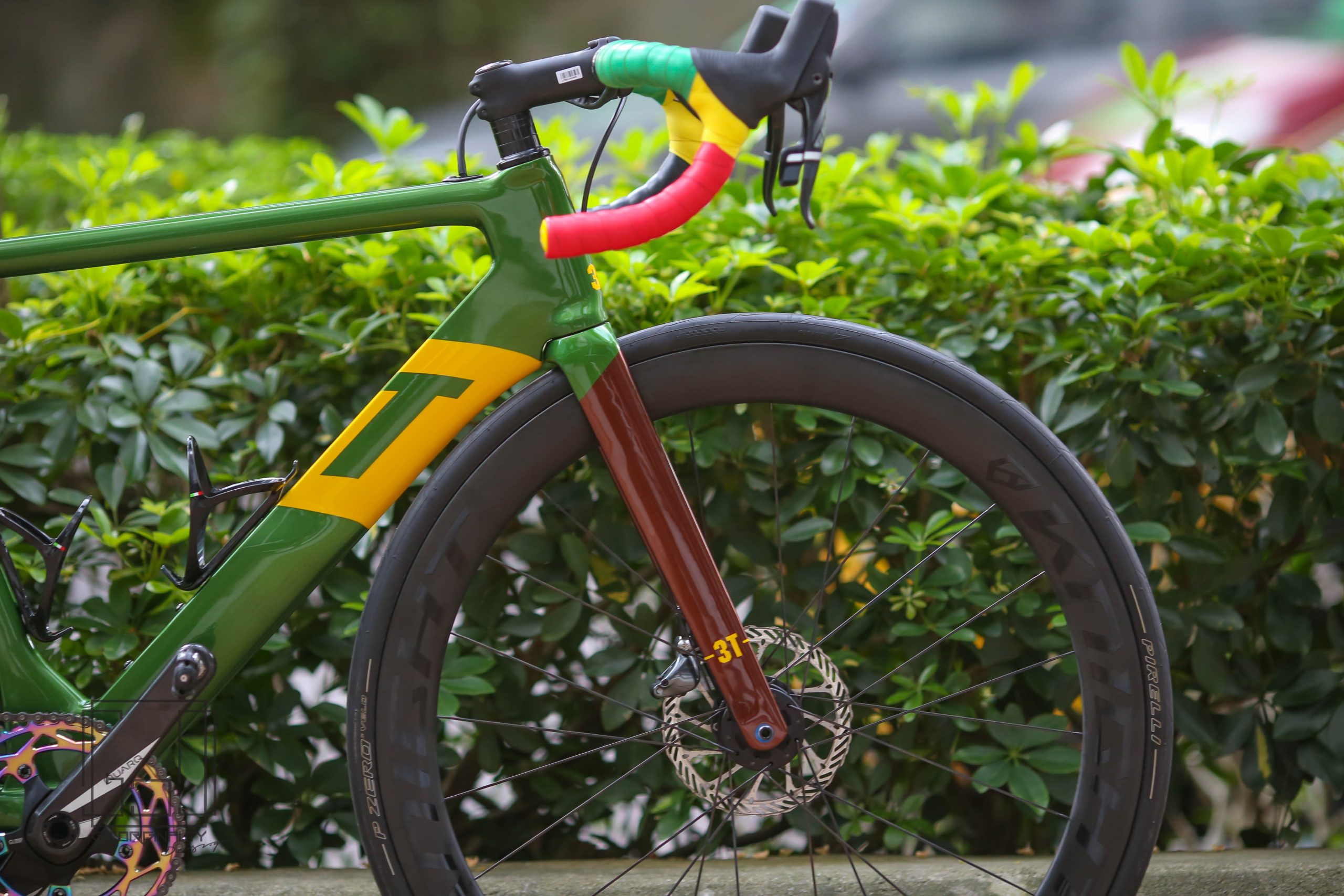 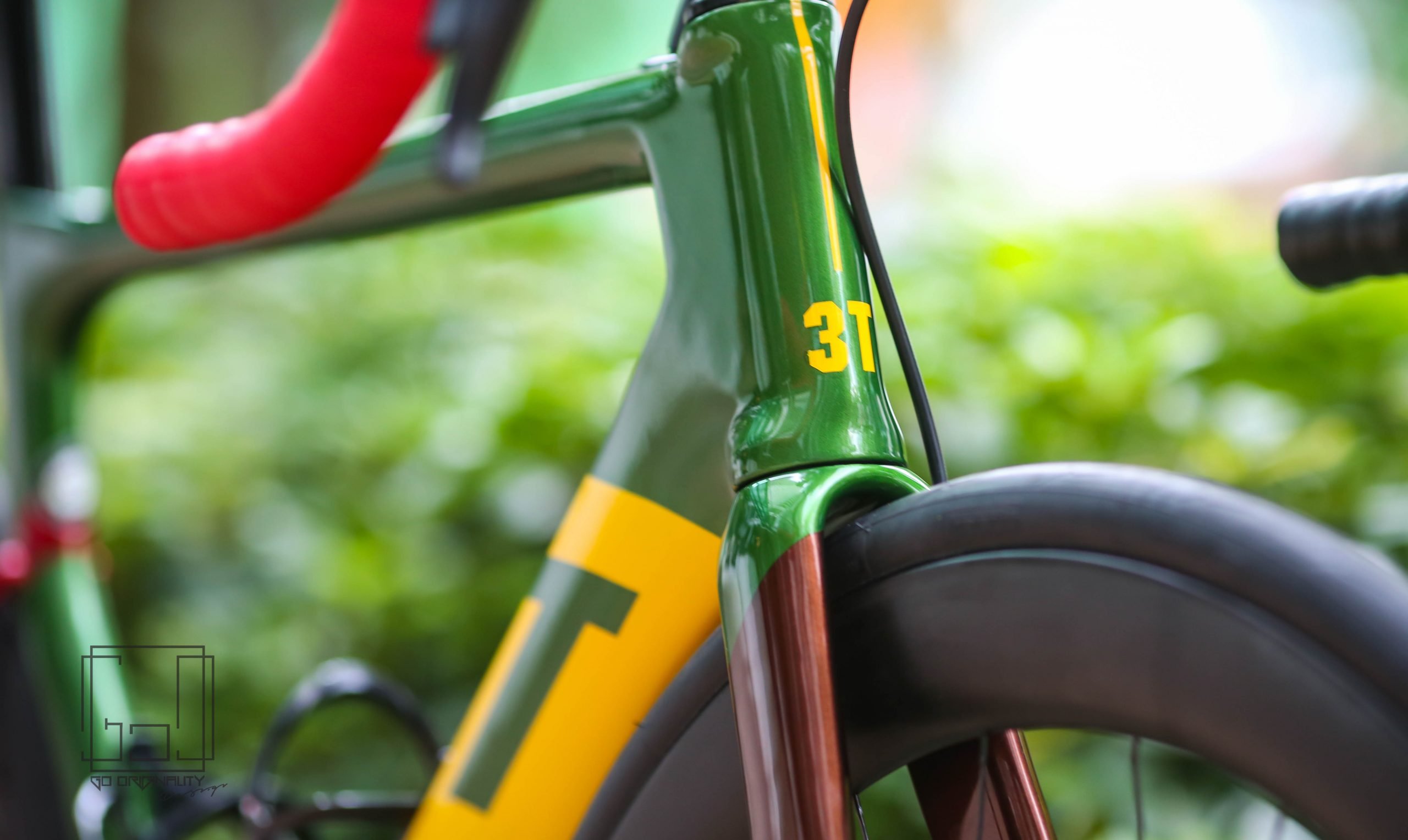