99 out of 100 times when people ask us about the best gearing options for gravel, they really mean “how can I get a big enough gear range”.

So here we will discuss how to squeeze the most gearing options out of your Shimano or SRAM 1x drivetrain. For the 2x options, you can find those in a future post. 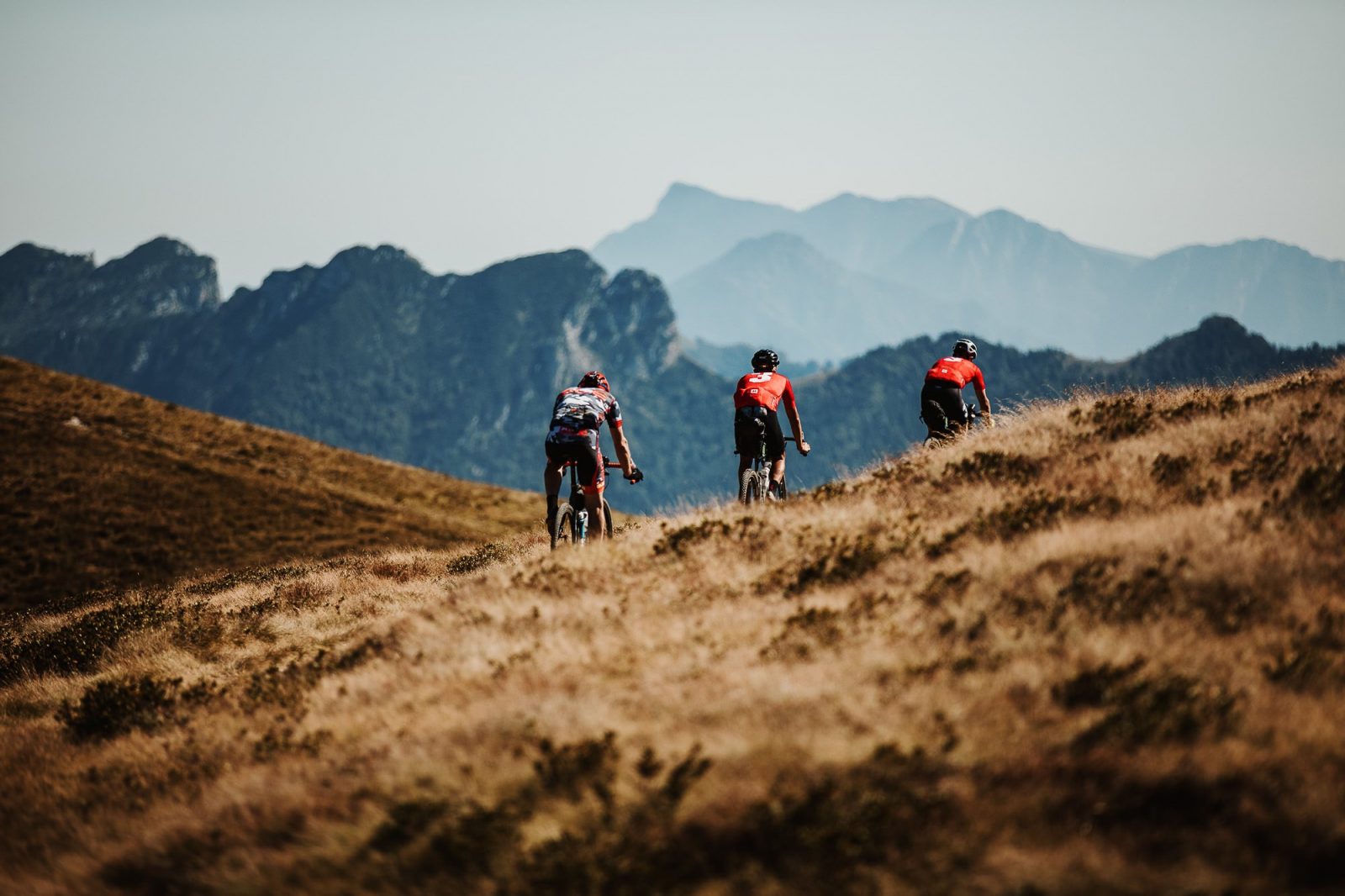 Seeing what gears people still ride with, it bears repeating. Do you really need that biggest gear? 53×11 is big enough to win the Tour de France. Now reduce that based on our power output relative to the top pros, the lack of domestiques and the slower gravel surface (and even if we ride on asphalt, unlike for the Tour our routes don’t get freshly paved just because we plan to ride there).

Then throw in other road users for good measure and realize that puncture protection is more important since most of us don’t have a team car on our Saturday ride! Finally, take into account that your gravel tires have a bigger circumference than your road tires (a wider tires is also a taller tire).

Soon you realize that a 20-30% gear reduction is not unreasonable (that would mean roughly a 42×11 or 38×11 as your top gear). Now, most won’t want to go that far and you don’t have to, but more likely than not your top gear sees little use right now.

Even for the descents, the advantage of having a large top gear is limited. If the descent is technical, your speed won’t be that high. If the descent is fast, you won’t be pedaling at your terminal velocity anyway. The top gear only determines at what point you can stop spinning and start coasting. You’ll keep accelerating regardless. That last little push with the bigger top gear provides just a small advantage, in the end any gear is rendered useless. 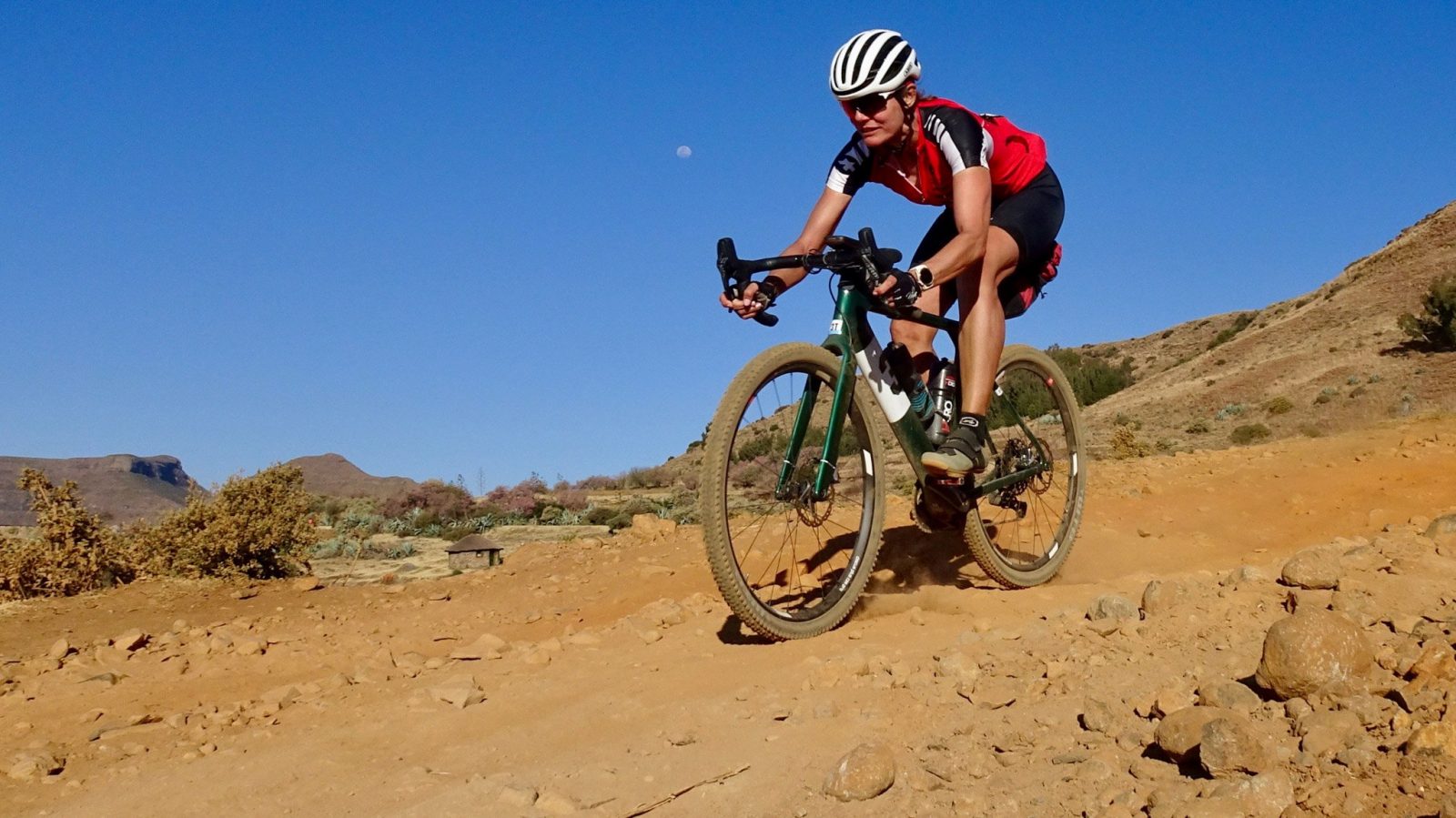 If you currently ride a Di2 or AXS electronic drivetrain, you can actually get a read-out of how much time you spent in each gear. Whenever I ask people to do that, they are shocked by how little they use their biggest gear(s). And that read-out even exaggerates the usefulness of your biggest gear because it also includes the time you spend in it while coasting down the hill.

For gravel I ride with 34×11 as its biggest gear. Even when I ride that gear on the road, I rarely miss having a bigger gear (sometimes I do, but it’s surprisingly rare). At 120rpm I get to 45kph, more than enough on the flats. Going downhill, I just enjoy the scenery as gravity pulls me towards terminal velocity.

I’m not suggesting you go down to a 34T, but there is room to reduce your top gear and gain a much more useful bottom gear. The most popular single ring for gravel is the 42T, while the 40T and 38T share second place.

So give that some thought; getting your top gear in line with what your legs really need is the best first step towards perfect gearing. 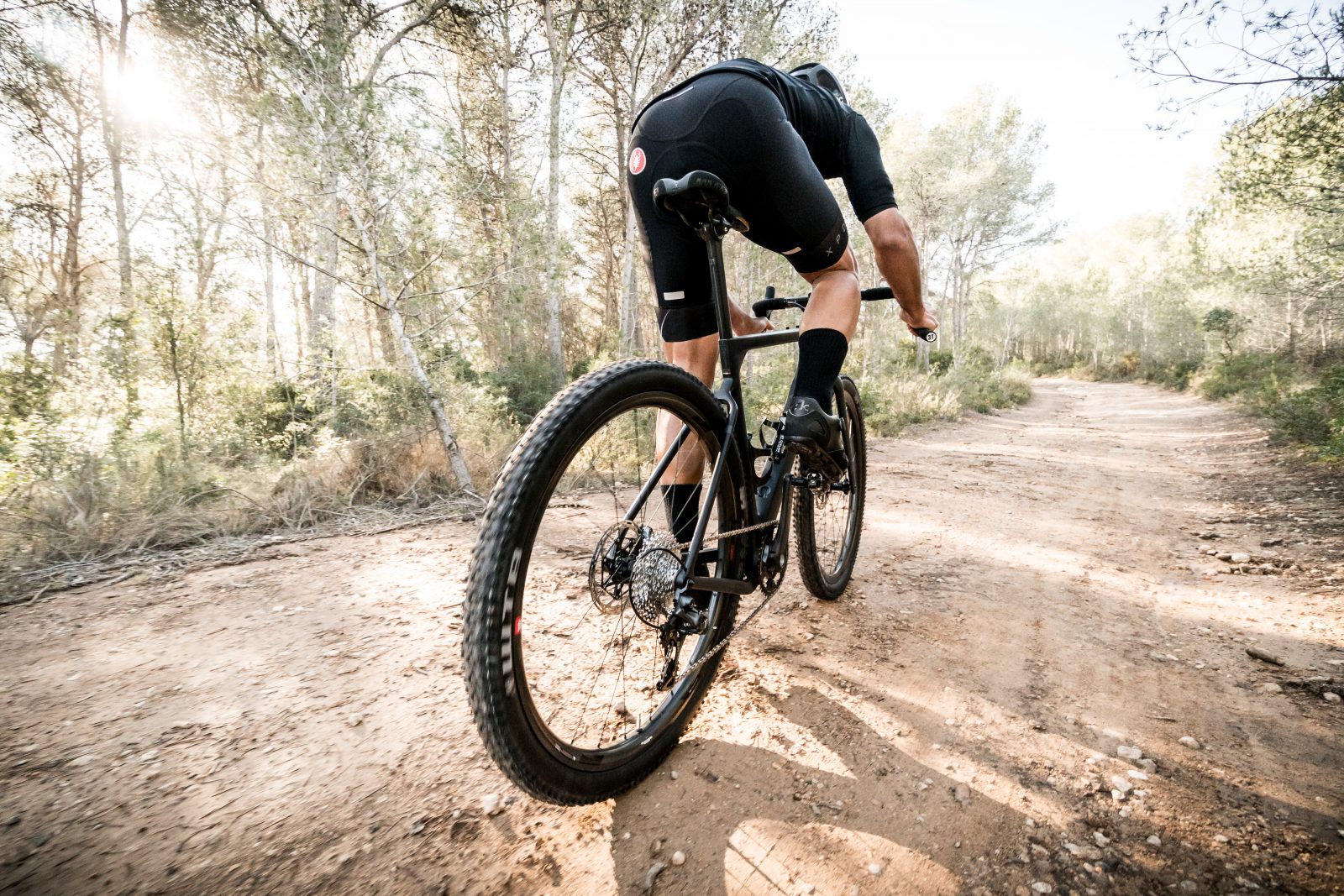 If you have a medium cage SRAM rear derailleur on your gravel bike, you most likely have an Exploro Speed with a Force 1 rear derailleur and an 11-36 cassette. Which means SRAM tells you that is as big as you can go. If you want to believe that, there are two options to still increase your range:

Because these cassettes start with a 9T cog, they all need an xD or xD-R driver. Additionally, you have to decrease your front ring by 18% to keep the same top gear. As a result, you will also get a smaller climbing gear despite the biggest cog not being any bigger than on an 11-36T cassette. So to compare:

But there is a second group of cassettes you can use to increase your range. And all you need to do is ignore what SRAM tells you about the 36T maximum cog spec for the medium cage Force 1 rear derailleur.

We’ve been testing all sorts of combinations in the lab and on the road, and we found you can use a much bigger cassette than recommended without a problem Here’s the list:.

Why would you want to run a medium cage over a long cage? With the mid-range cassettes, a medium cage offers crisper shifting. It also gives you better ground clearance.

If you use a Shimano standard road derailleur, I would strongly suggest to consider getting something with a clutch. It will make life a lot better on rough surfaces by dramatically reducing chain suck.

If you have an Ultegra RX derailleur with a clutch, it has a maximum big cog rating of 34T and the Shimano 11-34 cassette is likely what you have.

That’s not a lot of range for a 1x drivetrain (if you have this as part of a 2x drivetrain, that’s a different story, see the next episode). In reality, this derailleur can go up to a 36T without a problem. It also has sufficient capacity to start at a smaller cog, so cassettes starting with a 9T cog are not an issue. All in all it means you have these options:

For SRAM, this means you have an Apex1, Rival1 or Force1 rear derailleur. For Shimano this would be a GRX RX-812 (mechanical) or RX-817 (electronic) derailleur. The bike may have come with any number of cassettes, but most likely it’s an 11-42T.

These derailleurs are all rated for a 42T biggest cog. You can squeeze it a little bigger, but not much. For example, you could run the GRX derailleur with Shimano’s 11-46T mountain bike cassette (XT M8000 11-speed). It works, but it’s a little noisy.

Let’s put it this way: I would ride it if I really needed the bigger gear, but I wouldn’t sell it. With any of these hacks, you can expect and accept shifting that is maybe not quite as crisp or silent, but this 11-46T is a bit too far removed from the shift quality we are looking for. That said, several customers run the 11-46T on their GRX bikes and love it, so it is subjective.

However, if you want that sort of range, the solution I prefer is to go with the SRAM 10-42T cassette. Basically it gives the same range but without needing such a large cog at the end. Drawback is that you need to install and xD driver on your rear wheel.

To get even more range, you need to look at the other end of the spectrum, reducing that smallest cog to a 10T or 9T and then shrinking the chainring correspondingly to maintain your top gear. These are your options:

Note that these cassettes work roughly the same on Shimano and SRAM drivetrains. You do need to adjust chain length and the B-screw.

Your gear range can also be too big. The last four cassettes in the above table are probably not the best choice for most people on most terrain, as the huge range comes at the expense of big steps.

The biggest SRAM cassette available for these rear derailleurs is 10-33. That may work on some of your rides (and then it’s great as the steps are really small), but if you ever expand to tougher terrain it won’t be enough. The next 12-speed cassette up from 10-33 would be ROTOR’s 11-39, but these rear derailleurs cannot handle it (this is something SRAM, Rotor and 3T agree on).

It’s really a shame because except for the lack of range, these are great rear derailleurs and in general great group sets. To get more range from your Force/Red AXS groupset, you will need to swap out your rear derailleur to the Eagle AXS, see the next section.

Once you do that route, these are your options for cassettes (Note that SRAM’s 10-33T and 10-36T cassettes are too small to work with the Eagle rear derailleur, the B-gap will be too big): 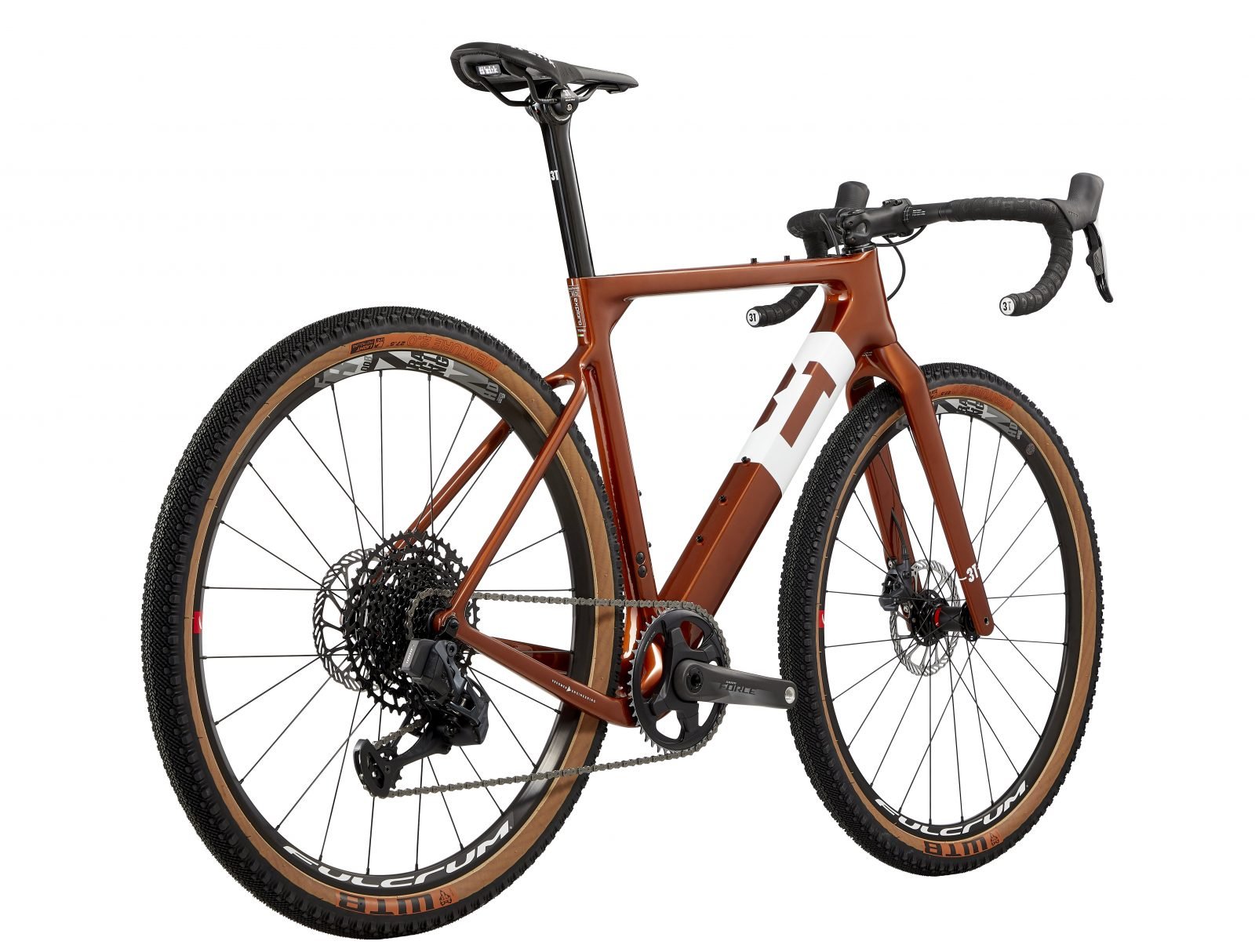 As in the case of 11-speed, the bottom 4 cassettes give you a very extreme range, likely more than you need.

Linkset: I mention a few times that your chain should be 1 linkset shorter than recommended for the best shifting. By linkSET, we mean a set of 2 links, one narrow link and one wide link for a total of 1 inch in length. This recommendation is based on the “single-speed chain length” method, see below.

Single-speed chain length OFFICIAL method: Run your chain directly over your biggest (or only) chainring and your biggest cog. Do not run it through the derailleur. Take the chain length with the chains tight as you can over cog and chainring like this, and add 2 linksets (4 links, 2 narrow and 2 wide). Note that “as tight as you can” may not be very tight, because you always need to add links in pairs for 1x. So if the route around cog and chainring is just a tenth of a link longer than your chain, you need to add another “1.9 links” to make the chain whole again.

Correct chain length: Listed above are the ideal chain lengths for the best shifting performance using the single-speed chain length method. You do have some leeway here. If you use one of the setups only sparingly and can accept occasionally slower shifting, you can try to run your medium range and wide range cassette with the same chain length. In fact, with a bit of luck both of their ideal lengths are the same (since we recommend shortening the wide cassette chain length relative to the standard). In fact, in most cases (it depends a bit on the exact chainring size), the ideal length will be the 11-36T and the 11-40T cassette if you keep the chainring the same.

B-gap: When you start playing with these cassettes sizes and chain lengths, you will find that the B-gap (the gap between the upper pulley and the biggest cog has a big effect on how well it works. The exact recommendation for the B-gap differs from derailleur to derailleur, so best to check the manual for the exact number. And then you may deviate a bit to see if you can get the shifting even better.

xD vs. xD-R drivers: Whenever I say the cassette requires an xD driver, that means the xD-R driver will also work as long as the 1.8mm SRAM spacers is added between the driver and the cassette. xD and xD-R drivers are identical except for this 1.8mm length difference.Hope this helps, happy climbing!