“Slovenian woods are called home by a number of big fluffy friends like wolves and bears, and if you meet them, trust me you will want a fast bike!”

Every year in May, a unique unsupported bikepacking event takes place right on the border where Italy meets Slovenia. Famous for the Karstic phenomena and infamous for the cruel WWI battles that took place there, the Carso region is sparsely populated and covered in largely untouched, dense nature. As soon as you’re out of the towns and on the 340km, 70%-unpaved, 6500+m gravel bike path, you’re devoured by the wild landscape and completely taken in by the astonishing views hidden behind every turn. 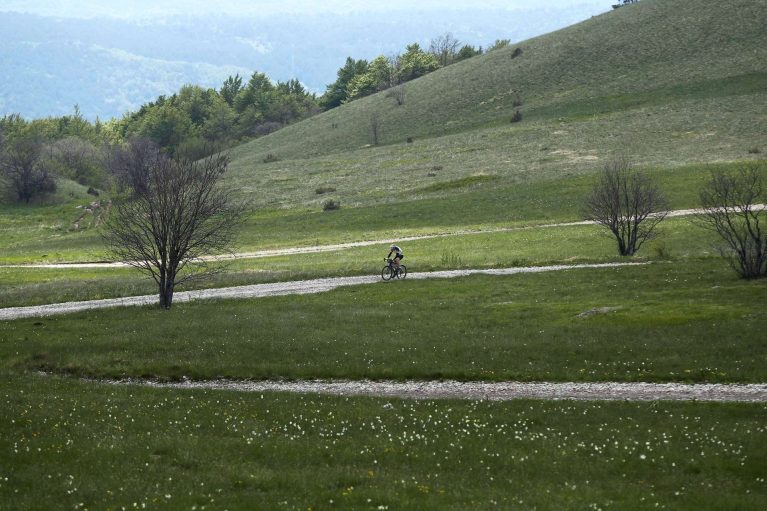 It’s Thursday evening and all my gear is ready, though the weather is not the best and the odds of getting wet are high! Turning off my laptop, I say bye to my colleagues and jump in my car to start the 3.5h drive that separates me from the starting line. 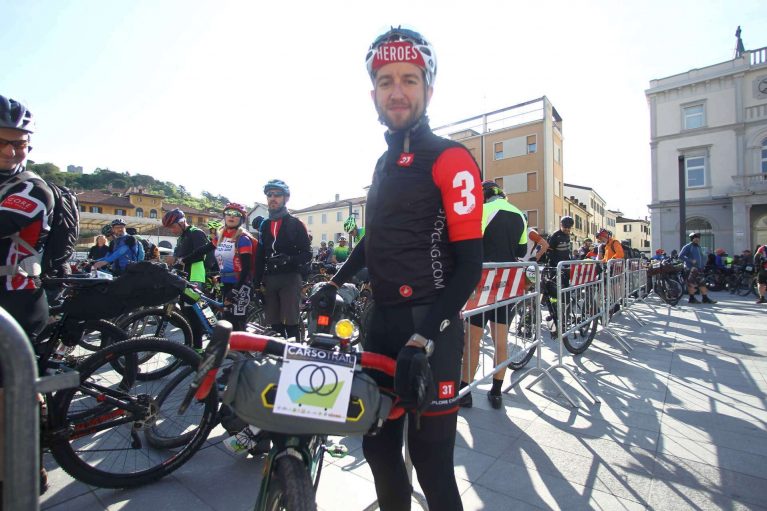 During the trip, I went through my checklist by heart. My British Green 3T Exploro Team was in perfect shape. With Thunder Burt 2.1” tires in the rear and 2.25” in the front (yes, the 3T Fango fork can handle them!) and the 9-46 cassette from e13 (I know what you´re going to ask and the answer is: yes, the SRAM Force1 RD can work with a cog that big), I would be able to go up and down on any terrain the Slovenian wilderness would throw at me. 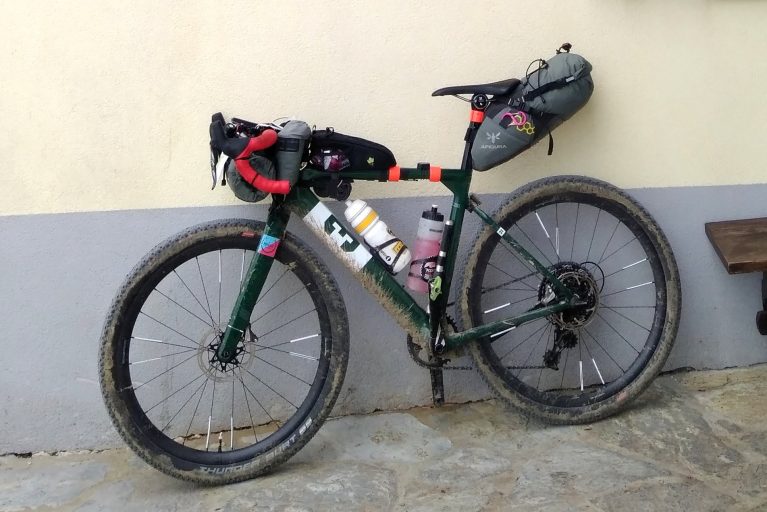 The track file was on my Wahoo Elemnt GPS and my bags were fully loaded with what I would need for the next 2/3 days adventure. It was already dark when I got to the campsite, but putting up my tent was not an option as the ground was completely soaked. Luckily my tiny car turned out to be more comfortable than I thought. 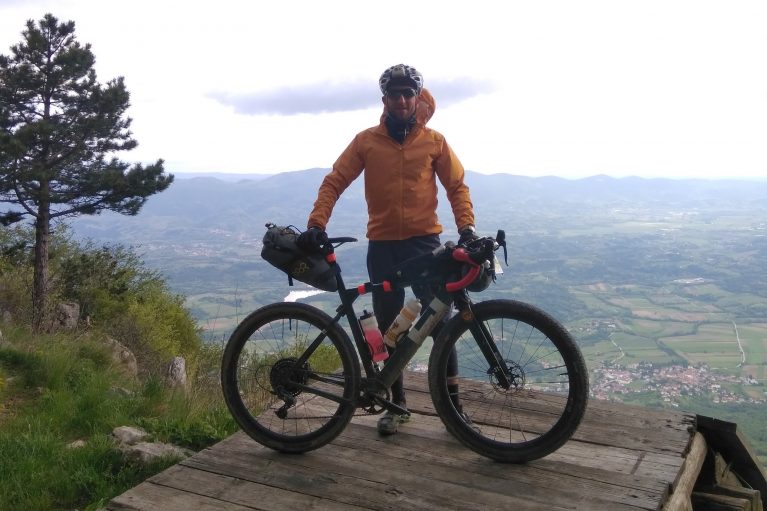 The morning of the start, the sun curled out of the clouds to warm the bike-packers. By the time I was ready to go, the campsite was full of cyclists, most of them riding mountain bikes, with some on fat or “mid-fat” bikes. At 8.30 AM, a snake of 300 people started to climb up the hills above the city of Monfalcone. The Carso Trail 2019 had just started! 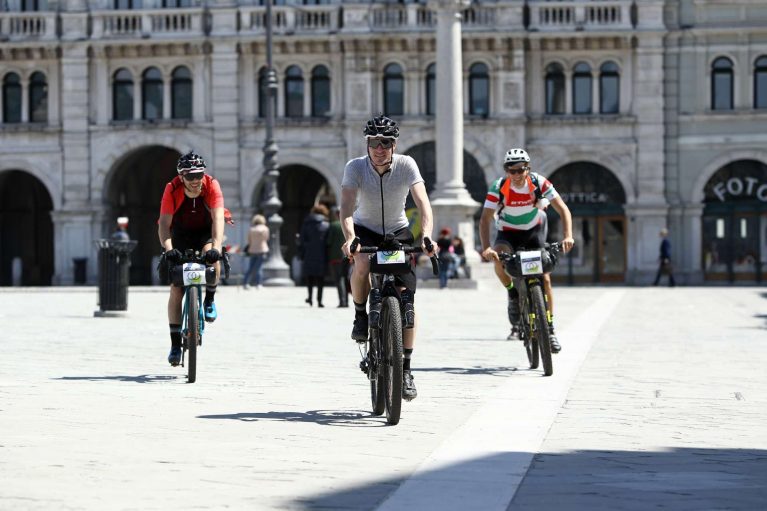 For the first 80km, we rode up and down the hills, always next to the Adriatic Sea, the most northern strip of the Mediterranean. We went through the beautiful Trieste and back and forth across the border. As both countries are part of the European Union, there is no real border there, but just a sign that welcomes you either in this or that territory, depending on your crossing direction. 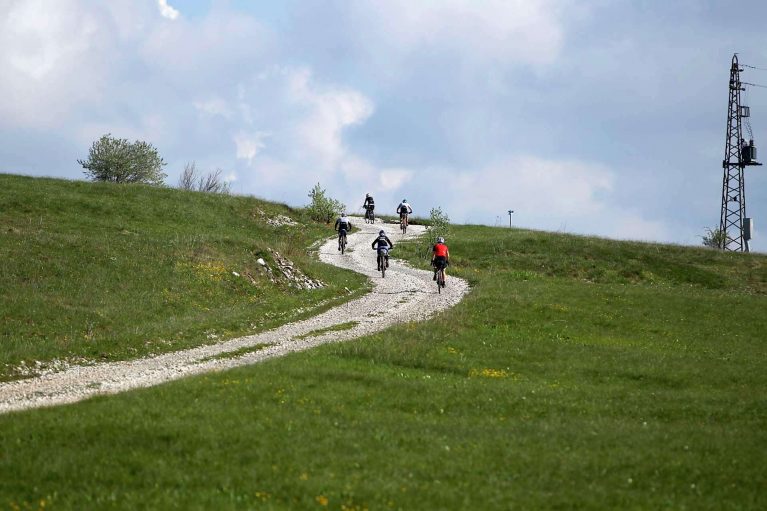 The Carso starts kicking at the 70th km, right after Trieste, when the climb to the Mount Slavnik begins – a 1250 m.a.s.l. and 1250m climb, since we started RIGHT at sea level! 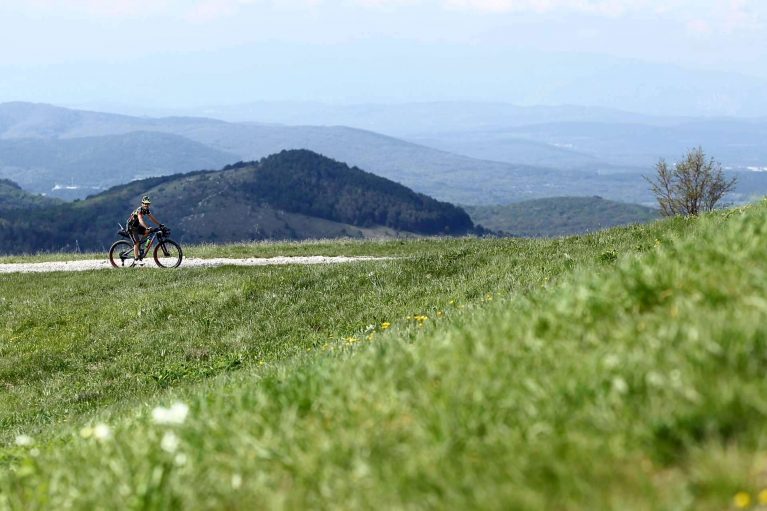 The climb was tough and mostly off-road. The first part was in the woods but as soon as we passed the tree line, the view was unbelievable. Green meadows and evergreens were all around, and the sun made the sea in the distance seem like it was glowing all by itself. After 30km, with my front wheel almost always pointing up, the shelter finally appeared at the very top of the mountain. A nearly 360° view, a cheese sandwich, and a cold Slovenian beer were my reward…what else could I wish for! 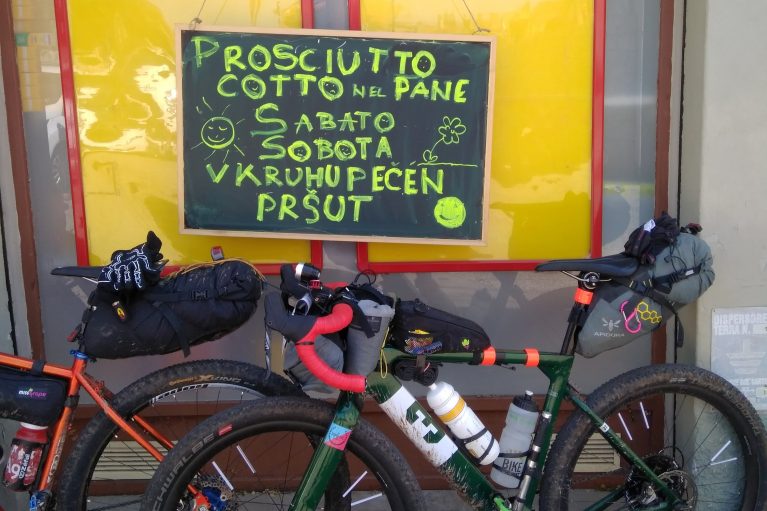 During the long descent, surfing on wide gravel roads and playing in narrow single tracks, I really appreciated the incredibly good balance of my bicycle. My worries at the beginning were completely swept away by the feeling I had while riding it as fast as I could on every kind of terrain the trail offered. The choice of throwing on the biggest tires I could turned out to be the right one, and the 2.25” low pressure in the front helped to slacken the head angle and increase the external diameter of the wheel, bringing more stability and comfort. If you ever try this setup, though, remember to re-set the tilt of your saddle and bar! 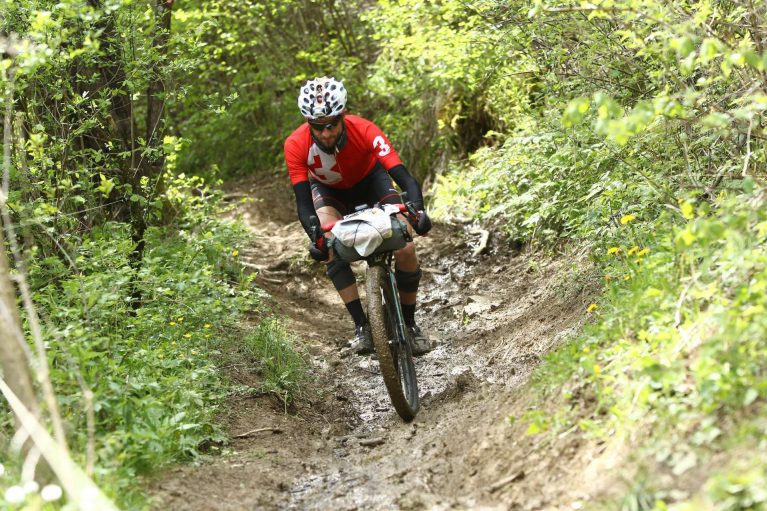 When the sun was down, dinner was at the only place open, the Pizzeria Coccolo in Podgrad. There was a continuous flow of starving cyclists going in and out as they had had their pizza.

Too tired to keep going, I found shelter in the porch of the Sobe Sajjina guesthouse with my sleeping bag. The owner, a Slovenian man who lived in Italy for a long time, was so sorry he did not have any more space inside that he offered me some warm tea before sleeping and woke me up with an even warmer cup of coffee early in the morning. Unexpected meetings like this one are always the best! 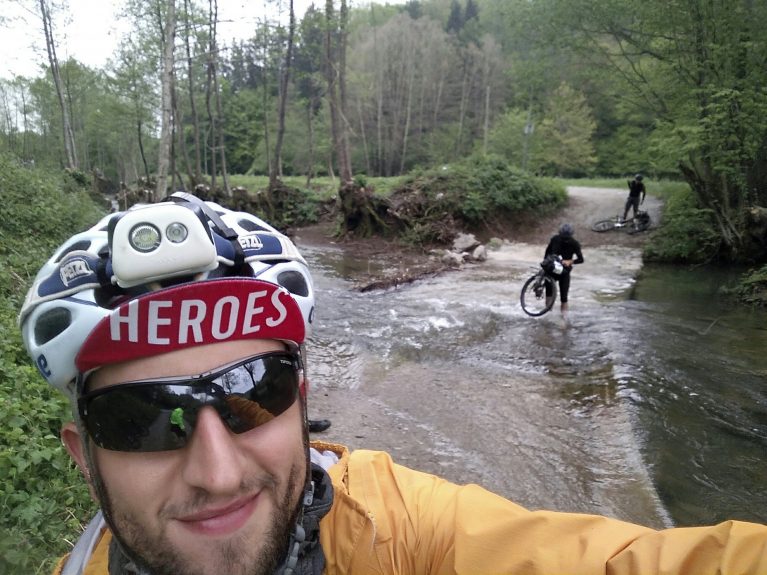 The next day was the hardest one. With most of the climbs and kilometers still to go, there was not much chance to rest. We crossed countless tiny villages – Rjavce, Tatre, Buje, and many others – with just a few houses, maybe a fountain and a small church, nothing more. Pushing on the pedals, I finally arrived in front of the Predjama Castle, built into the mountain in the XIII century. A stunning and imposing cave castle, it was more than worth a break. 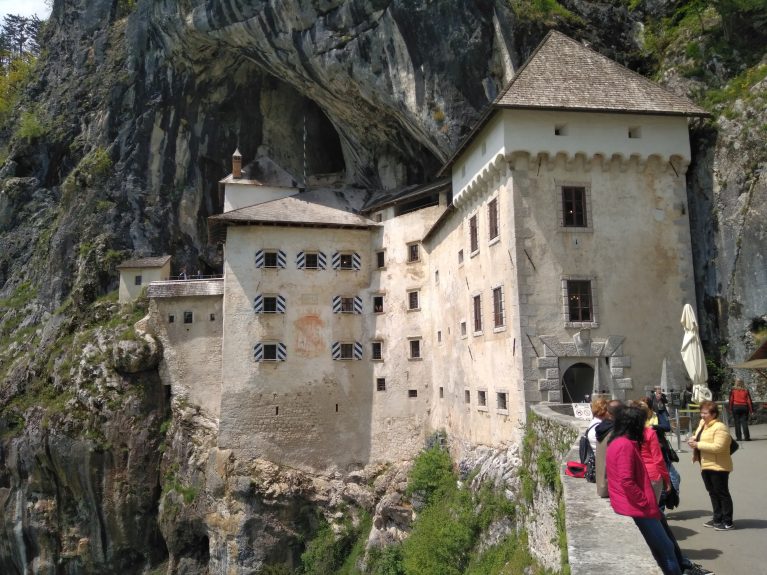 A few miles further I found some friends from Milan with whom I’d ride for the next hundred kilometers. The last set of climbs was in front of us, with roughly 1000m to get to the highest peak of the route, the Mali Modrasovec (1300 m.a.s.l.) where the last shelter was waiting for us. Up there we met with one of the organizers, Luca, who updated us on the forecast conditions. 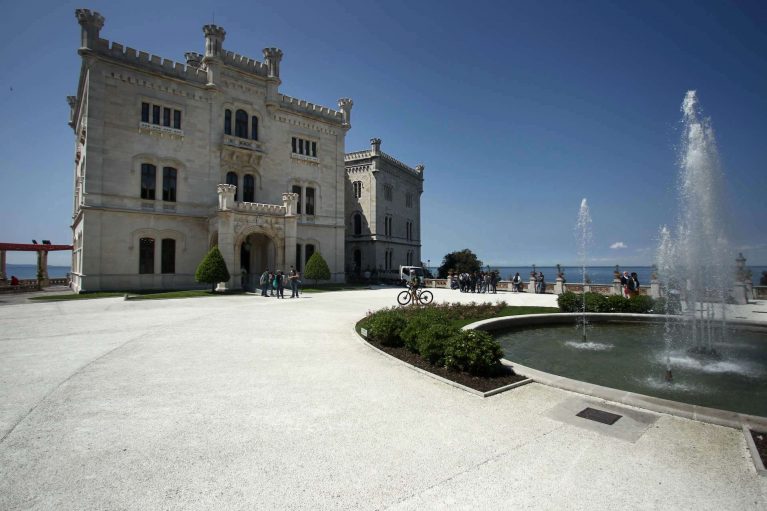 The weather had been incredibly beautiful for the past 1.5 days but now a thunderstorm was moving towards us. The choice was made: we’d go down as fast as we could and try to get home dry. The sunset fell on us while riding along the Isonzo river on a beautiful bike path. It was already dark when we got to the first Italian city of Gorizia. 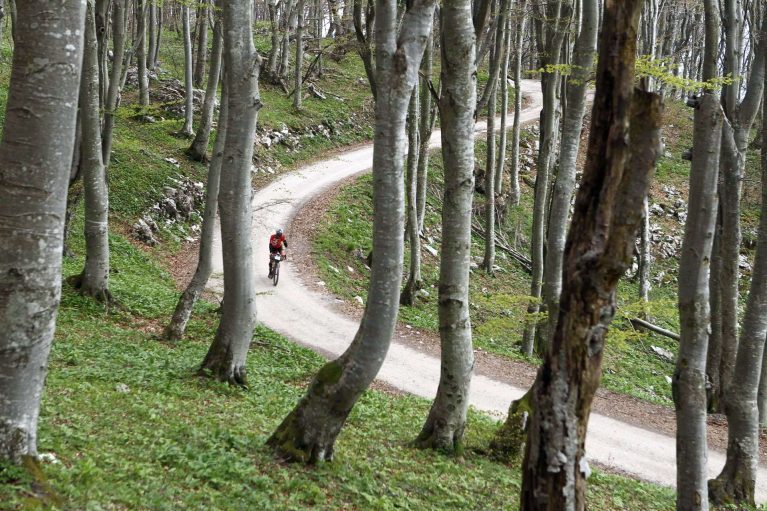 Once there, I decided to keep going through the night to accomplish the last 60km and cross the finish line that very night as the weather was going to turn bad the morning after. One last effort to go over the Monte San Michele, an Italian fortress, and I was done. The welcome was warm and full of beer, even though it was one in the morning!

The Carso Trail is absolutely one of the most beautiful bikepacking rides in Italy. It is not easy and puts you and your bike under heavy stress. You need reliable gear if you want to ride it, as you might find yourself quite far from the closest town. I can guarantee that you will never get bored and, according to the organization crew, next year it will be even crazier. 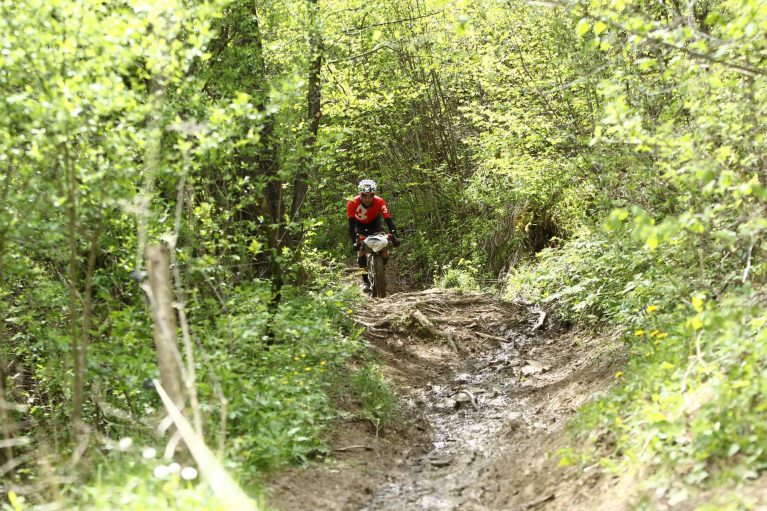 Once again my Exploro proved to be more than what it looks like when you look at it clean and tidy in its semi-slick gravel tires. It allowed me to keep up with MTBs on the descents and technical climbs and to be much faster on flat areas where the road position turns out to be the real advantage. This is what you get when you ride a bike designed to split tasks perfectly between frame and tires.

It also works the other way around when you want to ride tarmac in one of the most insane “not-a-race” you can find at the moment in Italy and probably in Europe. But for that, you´ll need to wait for Mister Hyde to show up – stay tuned for RIMBY number two!

◄ Previous Story The most capable Exploro is here!
Next Story ► WORLDWIDE 3T EVENTS AT YOUR DOORSTEP – AUGUST
...