My 3T was expertly built by Josh Hayes at Veletage in Vienna, Austria back in December 2018, after being approved as a 3T ambassador. Sure, I could have flown back with it or even taken it on the eight-hour Railjet, which has the added bonus of traveling at a top speed of 230 km/h, but I had a better idea. My plan was to take the train from Vienna to Innsbruck and ride from Innsbruck to St. Gallen, Switzerland. That was the plan, but it didn’t quite work out this way, here’s why. 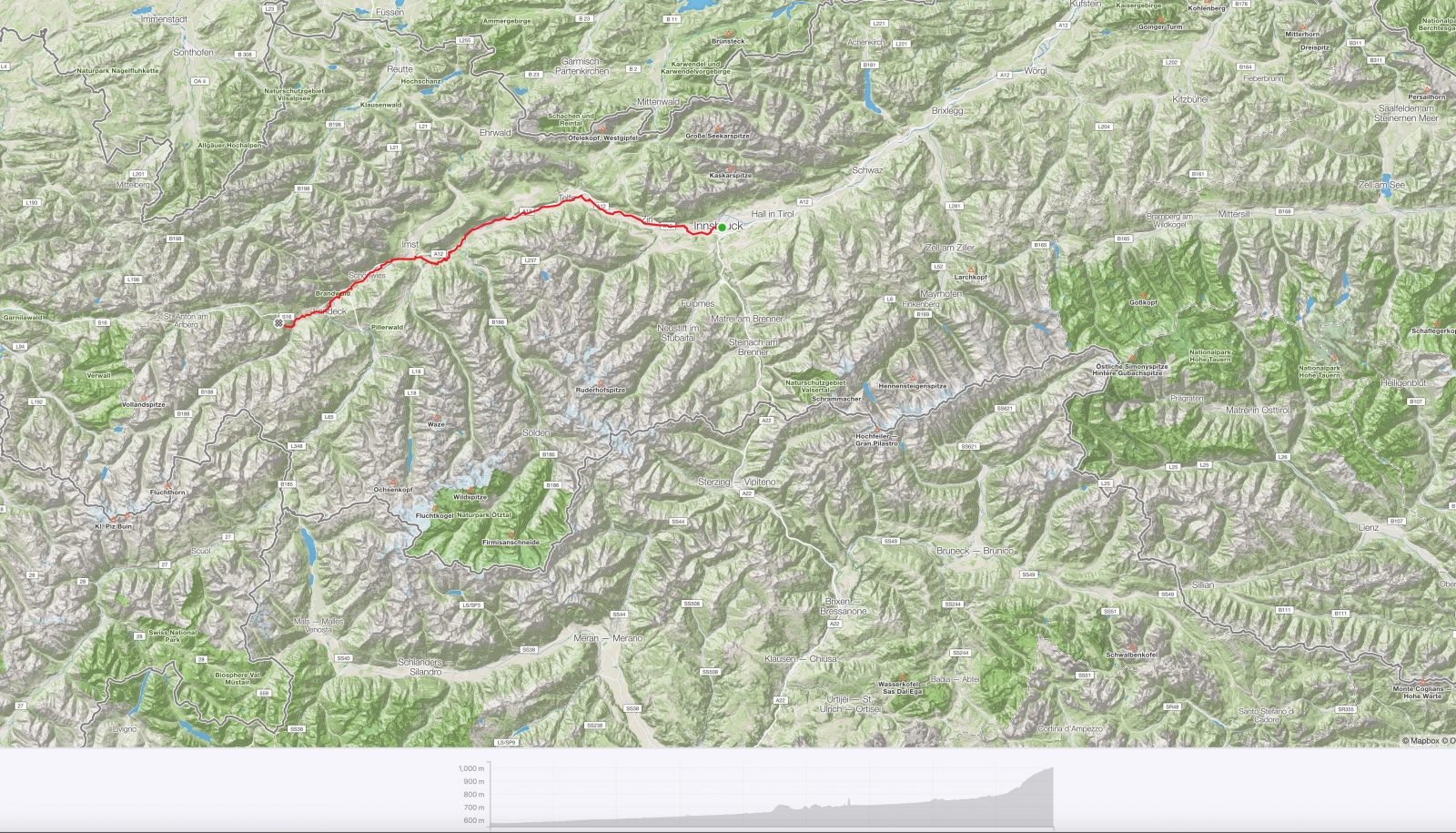 After departing from the Innsbruck train station I was immediately alarmed by the amount of snow I saw in the mountains – I hadn’t anticipated so much this late in the season. Apparently, it was a very good winter in the area, but I didn’t let this deter me. The snow was my first wrinkle, the second was my trusty MacBook Pro. I had hoped to give it to my wife to bring back with her on the plane, but she had to travel to Dusseldorf for a meeting, leaving me stuck with it. Thankfully I found an Apidura dealer and I bought the 17-liter saddle pack. I wasn’t thrilled to schlep the added weight, but I had no choice. 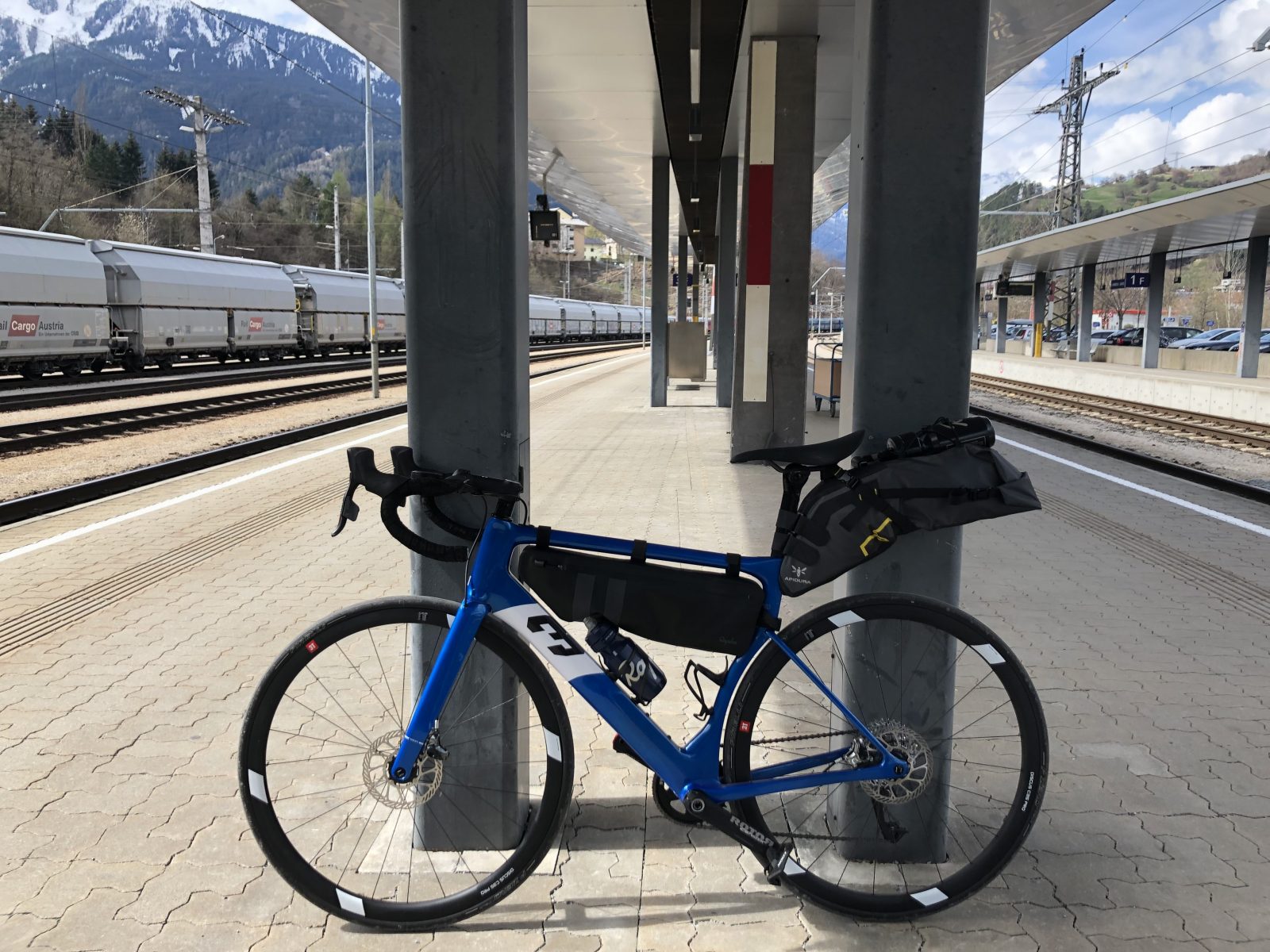 Forward and onward. I activated Strava and my Omata and quickly found the bike path, which hugs the Inn River, all the way to my first destination the Posthotel Strengen am Arlberg in Strengen, about 90 km away. I planned this to be my longest ride of the trip and it was smooth riding all the way, except for a minor adjustment I had to make to my saddle.  When I checked in I had a nice conversation with the innkeeper, who gratefully allowed me to bring my 3T into my room since I avoided a lock to keep my weight down. It was during this exchange that I discovered that the Arlberg mountain pass, which I planned to climb the following day, still thought it was December and was frigid cold with significant snowfall. I told myself that  I would sleep on it and hope for a dramatic change in the weather in the next 10 hours. 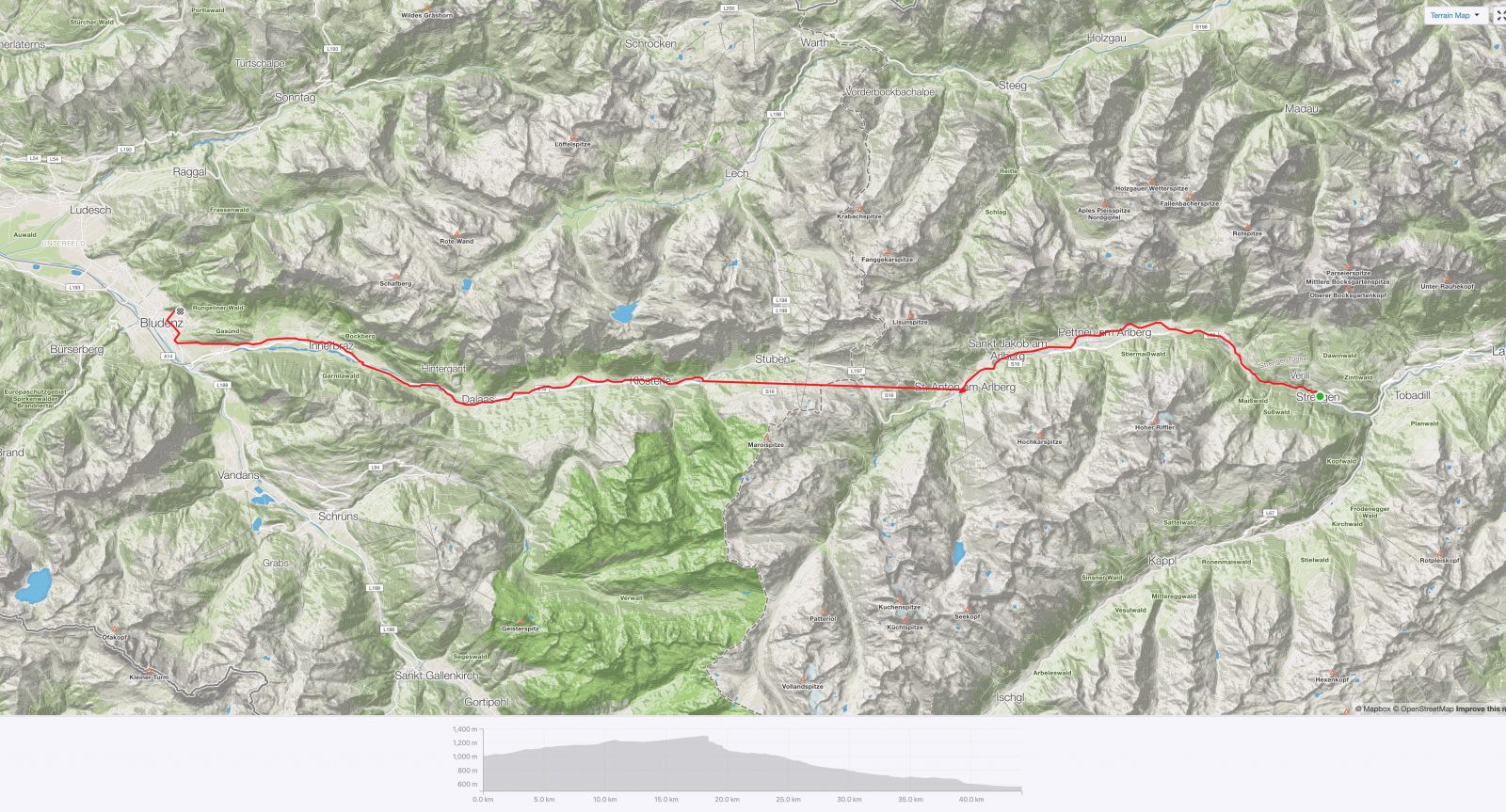 My alarm rang at 8 am and despite my sore legs I hobbled to breakfast and engulfed every morsel of bread and grains put in front of me. It was during my second cappuccino when I finally checked the weather on the Arlberg Pass, roughly 1800 meters above me. The snow was dumping and the temperature was – 2 C, which meant when I went down from the pass it would feel like – 20 C.  A quick gut check with my wife on the phone made the decision for me — the mountain pass was out of the question. Luckily, the Austrian’s solved this problem in 1880 when they began construction on Arlberg Railway. My brain was disappointed to not push my SRAM eTap Red and Rotor crank to the max, but my knees and legs we relieved. Oddly, to get under the pass on to my destination in Bludenz I would have to go one step backward to switch to a different train. In total it took around 45 minutes and I was back in the saddle. After nearly 45 km I arrived at Val Blu Sporthotel & Spa, where I quickly grabbed a large Tyrolean beer and some day old, salty pretzels. They could have been a month old and it wouldn’t have made a difference. 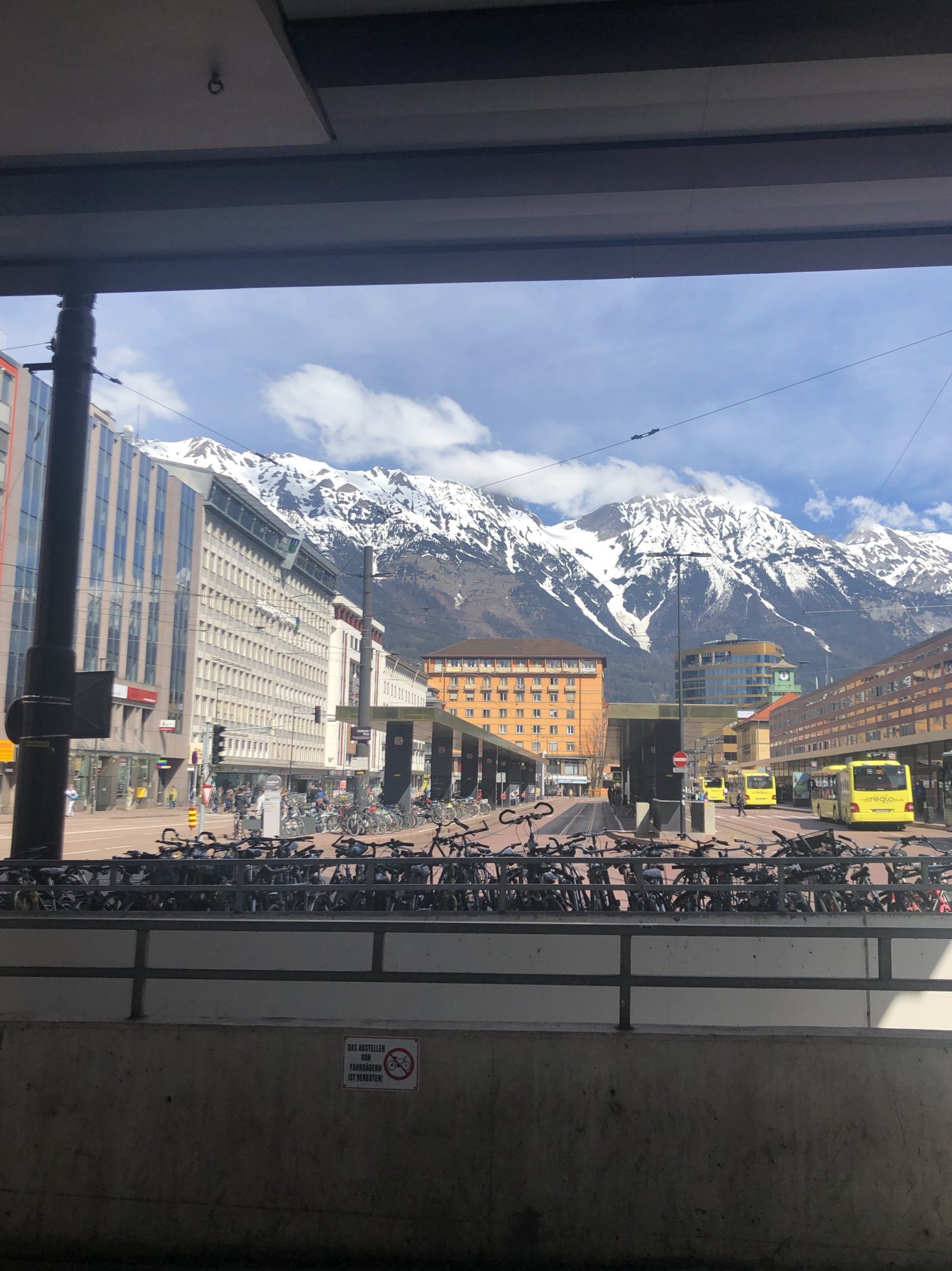 On my final day, I would be crossing into Switzerland for the first time. In fact, I was hoping to go to the spot where the borders of Switzerland, Austria, and Liechtenstein all touch. But once again, Mother Nature had other plans and it decided to rain, hard and cold. While I was prepared, I’ve biked in torrential rain and it’s not that enjoyable — it would be the steel wheels once again. Bludenz is a fairly large town and it has a train station, which passes into Switzerland. From my weather map, I could see the cloud patterns and while I originally wanted to ride until St. Gallen, the safer choice was Rapperswil. Besides being beautiful, Rapperswil is also a straight shot home after crossing over Zurich Lake. Thankfully, just as I was leaving the hotel the rain stopped so I decided to ride to the next station over, Feldkirch 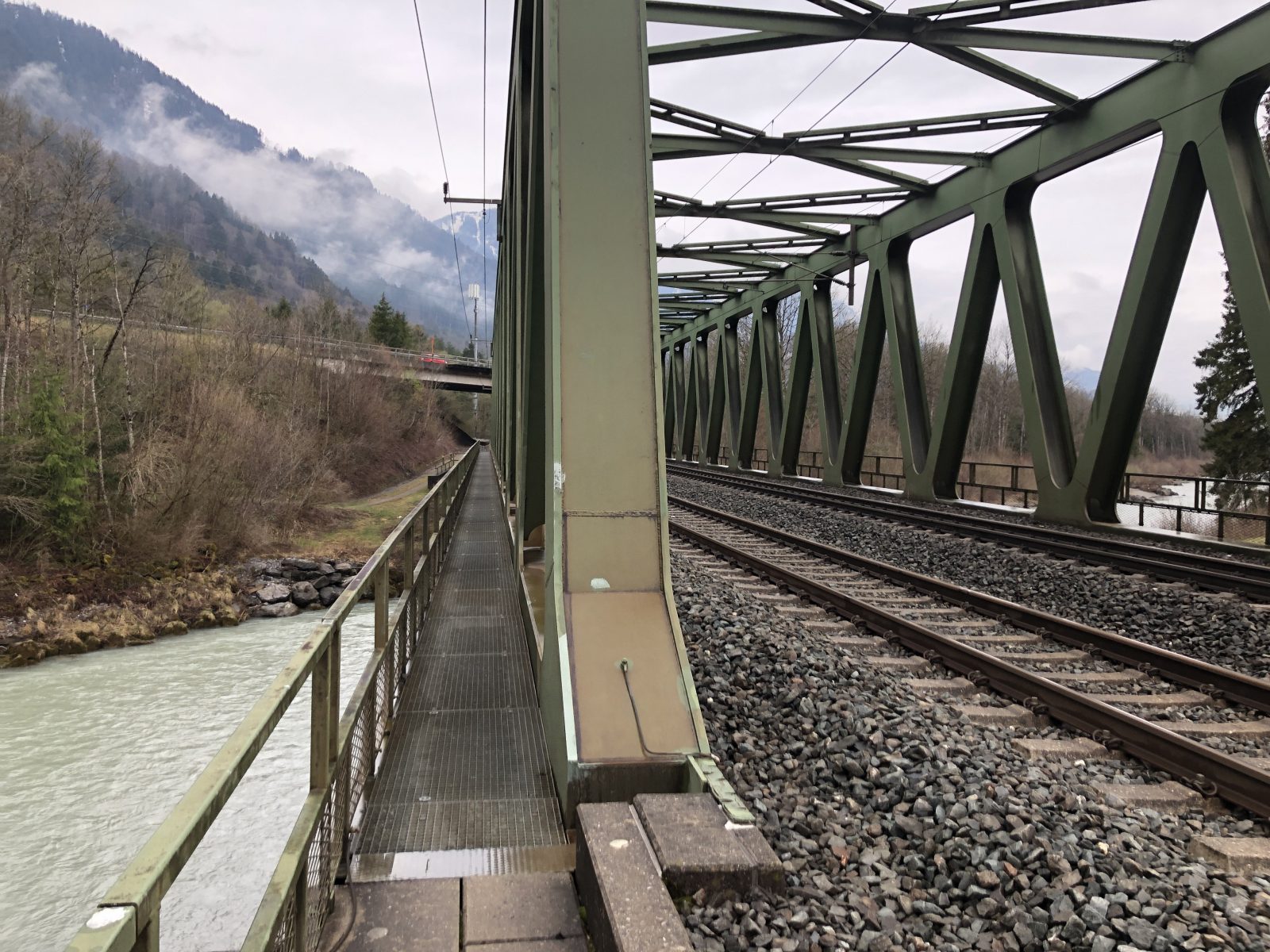 To my surprise, this was one of the highlights of the ride as I passed over some gorgeous wooden lattice bridges and several Mediterranean teal colored lakes. But then things got a little hairy. I missed a sign and discovered a gravel path through a forest — big mistake. My German is still very much a work in progress and what I thought was a name of a town up ahead, was actually a hike to take during a full moon. While I had complete confidence in my Pirelli tires I didn’t anticipate so many tree roots along the path. I opted to walk for a few kilometers because I was in the middle of nowhere and a wipeout would have been messy. My wife, who was tracking me on Strava was also in panic mode asking me if I was lost. I choose not to reply until I had good news. After about 15 minutes I found the train tracks and a bridge leading over the river. The footpath on the train bridge was narrow but wide enough for me to cross with my 3T by my side. To my pleasant surprise, my Strava route was five meters in front of me and I was back on schedule. I hastily sent my wife a thumbs up emoji. 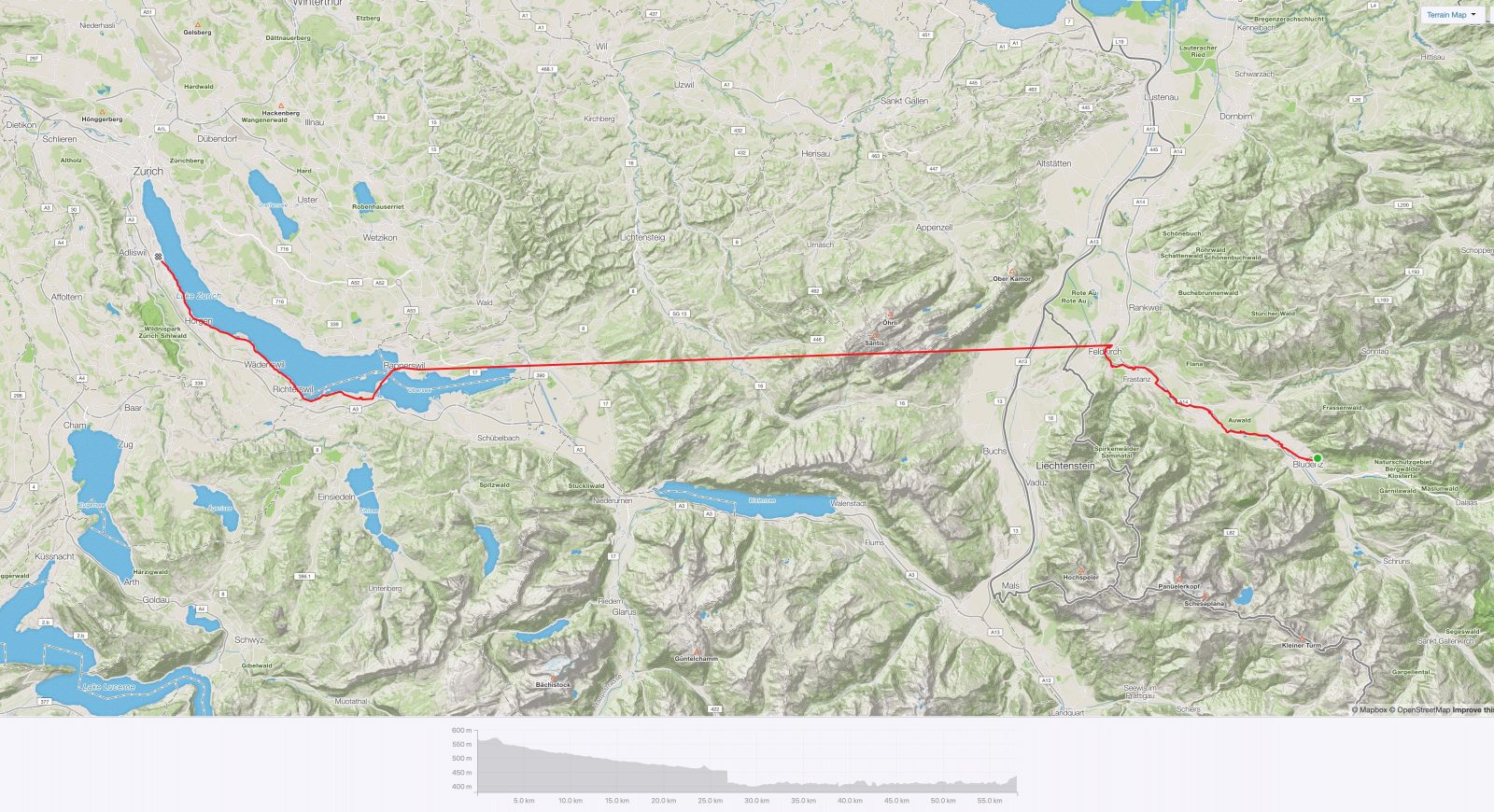 Feldkirch was about 15 km away and the skies were looking dark, so the train to Rapperswil was next.  I made it to Feldkirch with about 20 minutes to spare arriving in Rapperswil in less than 40 minutes. Rapperswil to my home was part of my normal ride, so no issues. The final count for the day 57 km. I certainly could have arrived in under 90 minutes by plane, but what fun would that be?