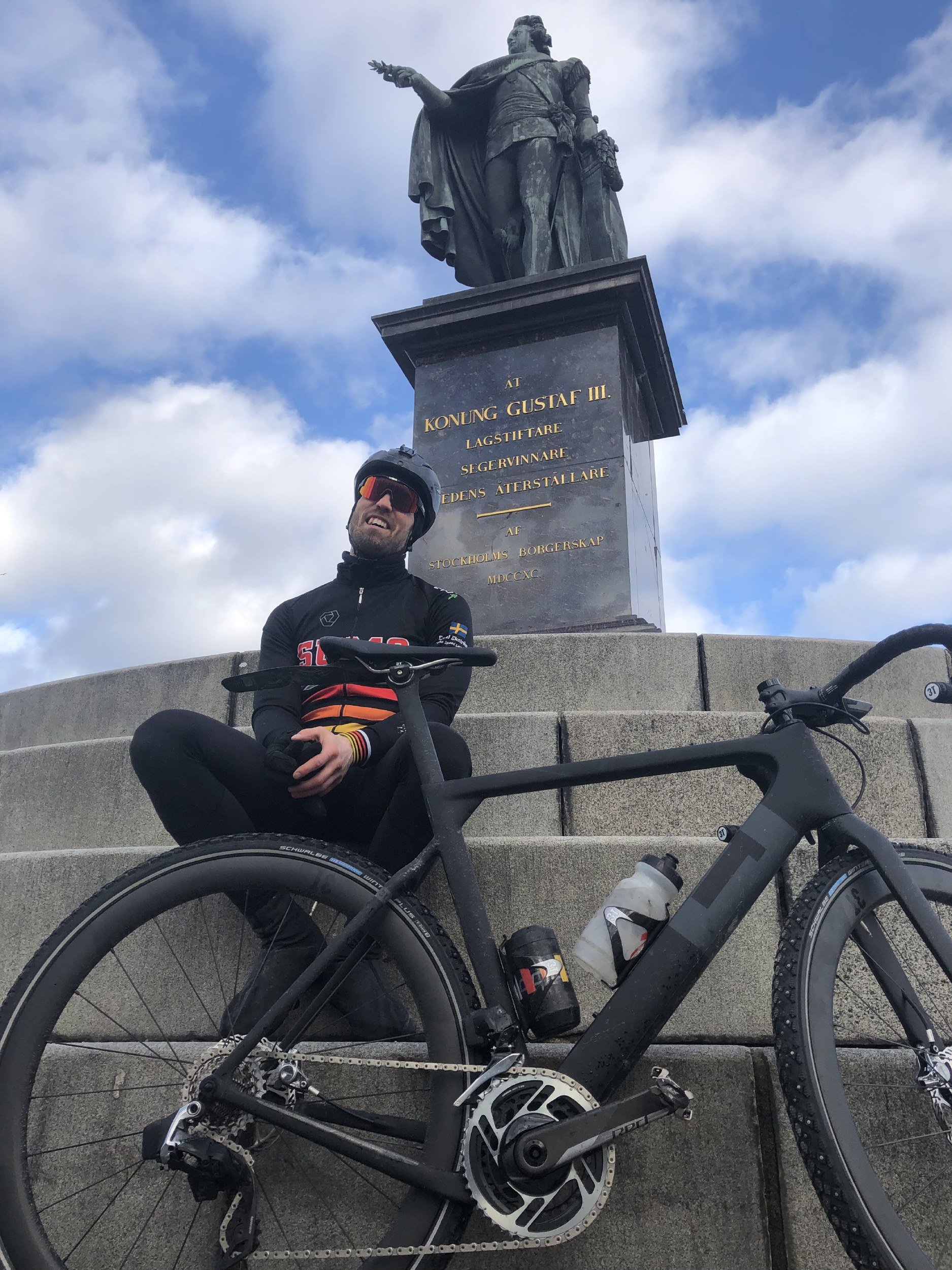 A few years ago, I read a post in a cycling forum that still resonates with me. The bottom line was that too many cyclists get caught up in gadgets, accuracy of power meters, structured training, in measuring their FTP etc. and that too many group rides turn in to contests where riders try to prove themselves. Why not just go out on your bike and have some fun?

The mission for this beautiful mild and occasionally sunny winter Sunday was to go out on my brand-new bike and have some fun. The route for the day was a classic, one big lap including the major islands east of Stockholm all connected by bridges and ferries.

For me, a masters cyclist with a very competitive mindset, fun is going fast and trying to win. But fun is also exploring and having enough breath to talk and laugh with your friends or to stop for a photo when it is just too beautiful not to. For me my new Exploro, a super bike or dream bike in my opinion, is all about doing whatever I feel like whenever I feel like it. I love to improvise, go hard and fast if that is what my legs or a perfect winding road wants me to. Or to choose the untested gravel path that I been wondering where it ends up.

Since I got my first gravel bike I been excited about this genre of bikes. Eventually I realized that it really is an understatement to call them gravel bikes. It points out the main difference to a road bike but does not really tell you the beauty of the all road potential, making exploring and creating new routes more interesting and leaving more room for taking some chances. So, I was happy to hear that 3T figured out that all road concept. The fact that they now launched an all road bike with an 2x electronic group set (the Exploro LTD SRAM Red Etap AXS) took it one more step in the right direction. 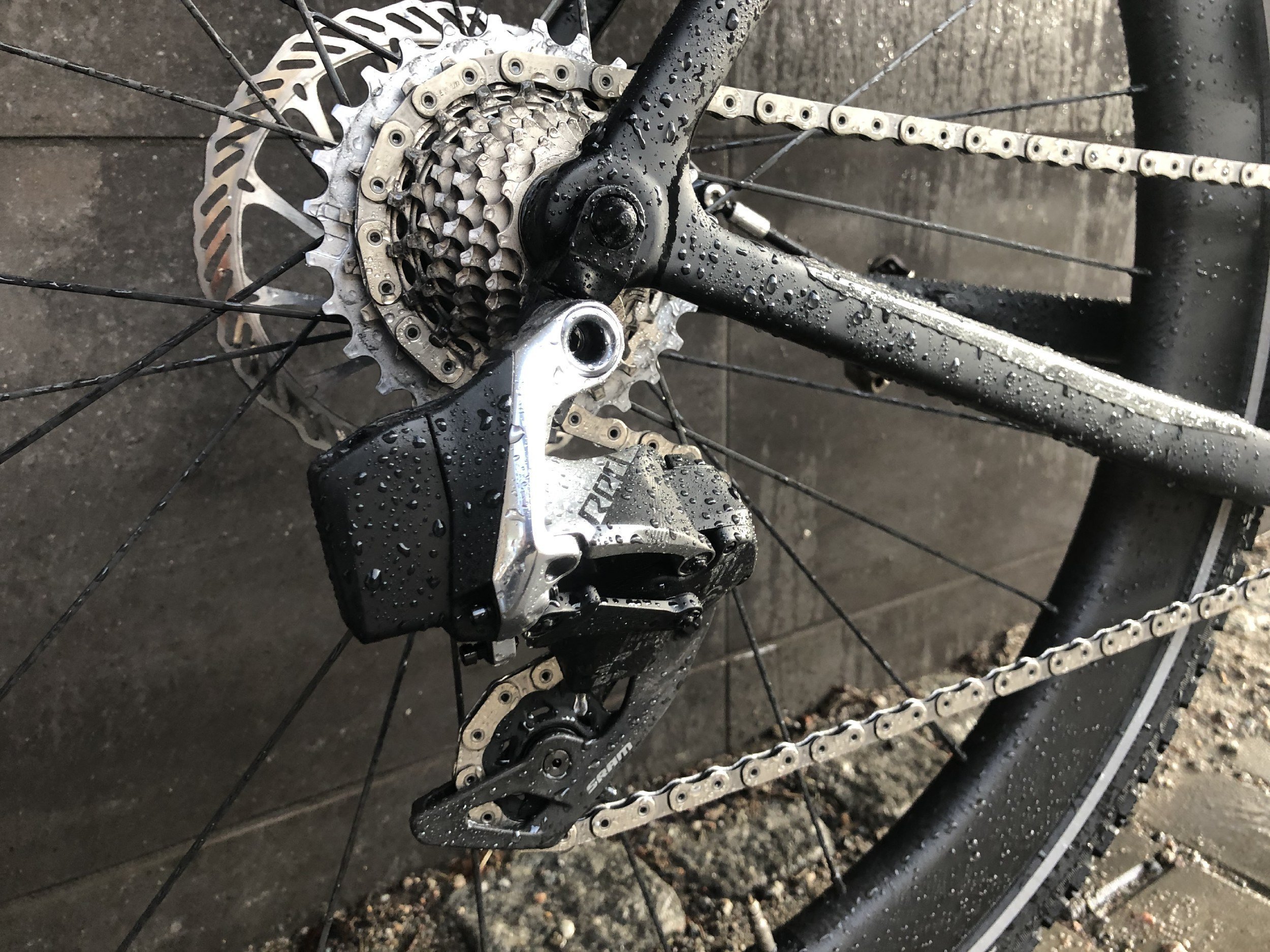 I do not want to turn this into a bike review. Like I mentioned before, too often we focus on the gear instead of the experience and actual ride. Getting out there and ride is always good, no matter what damn bike, bb-stiffness, carbon layup etc..So, short and sweet; to me the Exploro feels stiff, responsive, agile and its range of use is enhanced by the ability ride it on beefy tires. A very racey all road bike for sure.

Now, putting studded tires on your brand new “super bike” is a bit like adding gravel to your gravy. It is just not right. The feel of the bike is for sure affected by more rolling resistance and the pure weight of the tires. More than a kilo per tire! So, when I say that my Exploro studded tires still feels like a race bike on tarmac I might be stretching the truth ever so slightly. But not that much. The stiffness and responsiveness are still there, and she sure likes to climb, having that urge forward that a good climber should have. 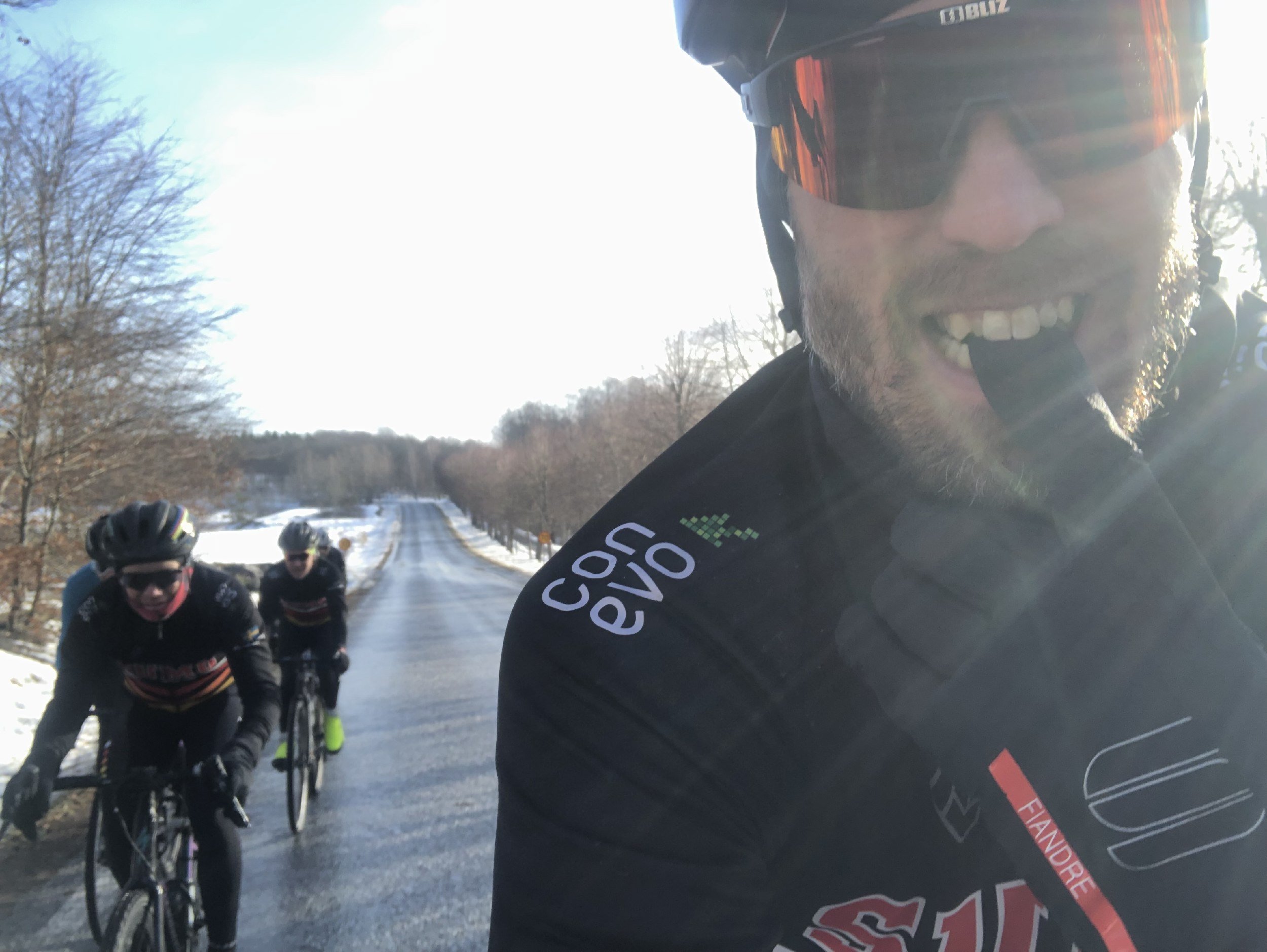 Back to the ride then! The route is a classic “summer route” for a weekend group ride on tarmac. We headed out east to get more and more disconnected from the capitol, then north and back west across the islands of Rindö and Vaxholm. The last part is straight through the weekend bustling city. Most of the cycling is easy. After the island of Vaxholm there is some quiet winding roads with hill climbs and sweet sweeping turns. 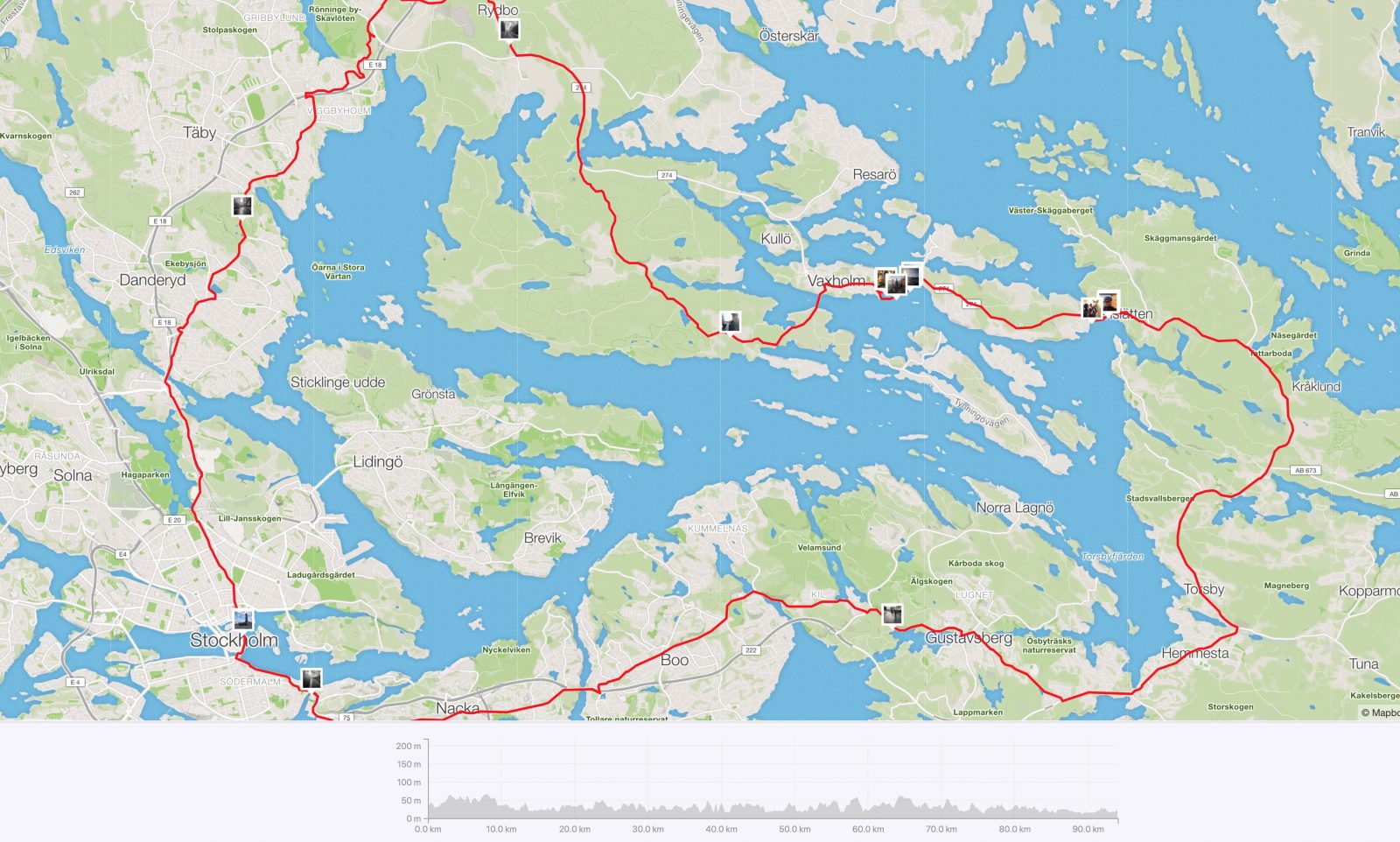 The beauty of this route is that it gives you a bit of a feel for Stockholm’s connection to the archipelago. In the summer Vaxholm, the natural place for a coffe stop, is bustling with tourists and a hub for the ferries taking them further out in the archipelago. During summers these ferries usually allow you to bring your bike and almost all the major islands has some nice gravel roads as well as hostels, bars and restaurants. Not a bad plan for bike packing if you like it lazy with options to stay at sandy beaches or sunbathe on smooth granite rocks, polished by the ice ages.

The plan was to include some of the gravel roads that could be found along the way. However, this time of year conditions vary from one day to the other and on this day gravel roads where a mix of ice and soft waterlogged mud. We agreed that braver men and women already have failed in these conditions and that sometimes it is better to learn from the mistakes of others rather than to relive them yourself.

While on the subject of riding conditions I just want to share some of my tips on winter riding. Now I am talking of winter riding in Nordic conditions, temperatures dropping down and below zero, ice, wind and snow being main features. First, ride a bike that does not break down or puncture. That means fresh tires. Both co2 cartridges and human hands performs poorly in the cold. You tend to drink a lot less but if you need to bring fluids, keep them in a hydration system underneath your jacket or it will eventually freeze. The longer you go the colder you get, so do not plan for more than you can handle. A couple of hours can be fun, a full day in the same conditions could be misery. Bring reliable and cheerful friends and keep the mood up despite all challenges. Last and most important. Do not stop. And if you do, make sure to stop in front of a coffee shop.

Anyways, we managed to ride along to the first ferry in good order. For a while it almost felt like a group ride in spring, lifting the spirits high. We managed to miss the ferry with only a minute so there was a bit of waiting around in the cold before it returned. A guy with an insulated jacket would have been cause for great envy. Above us a great eagle started to circle, apparently looking for weak and old cyclist that might not make it through the winter. 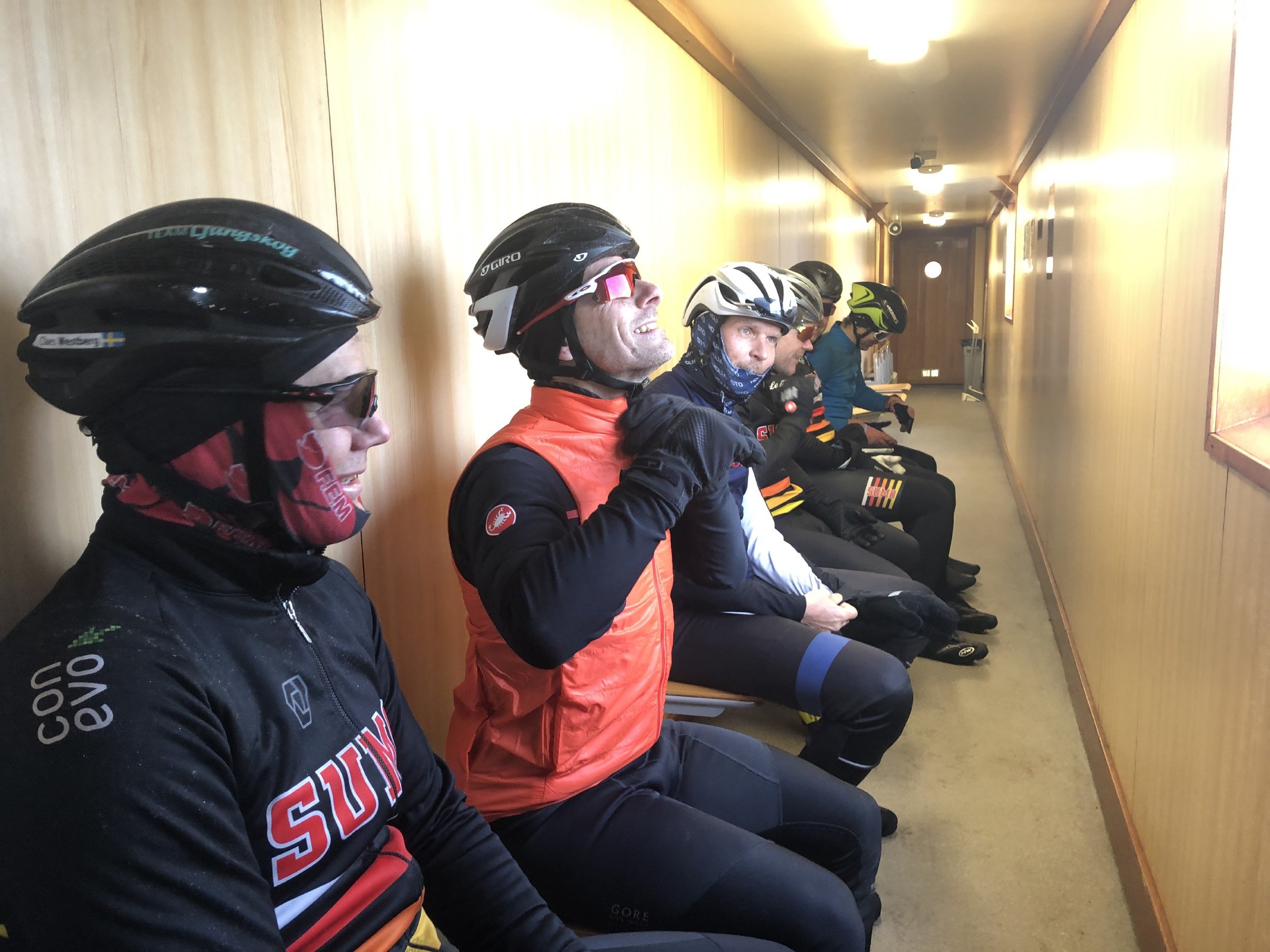 After the ferry to Rindö there is another ferry to Vaxholm. The timetable of these ferries is supposed to match the cars that use them. Honor demands that we try to make it to the same connecting ferry as the cars. We agreed to do a fast but controlled rotation to keep a nice tempo. “We leave nobody behind” was the last words before everyone scrambled off the ferry and started to pedal away. I was Jacks total lack of surprise when the group was fragmented in the first hill climb and a free for all race for the ferry broke loose. 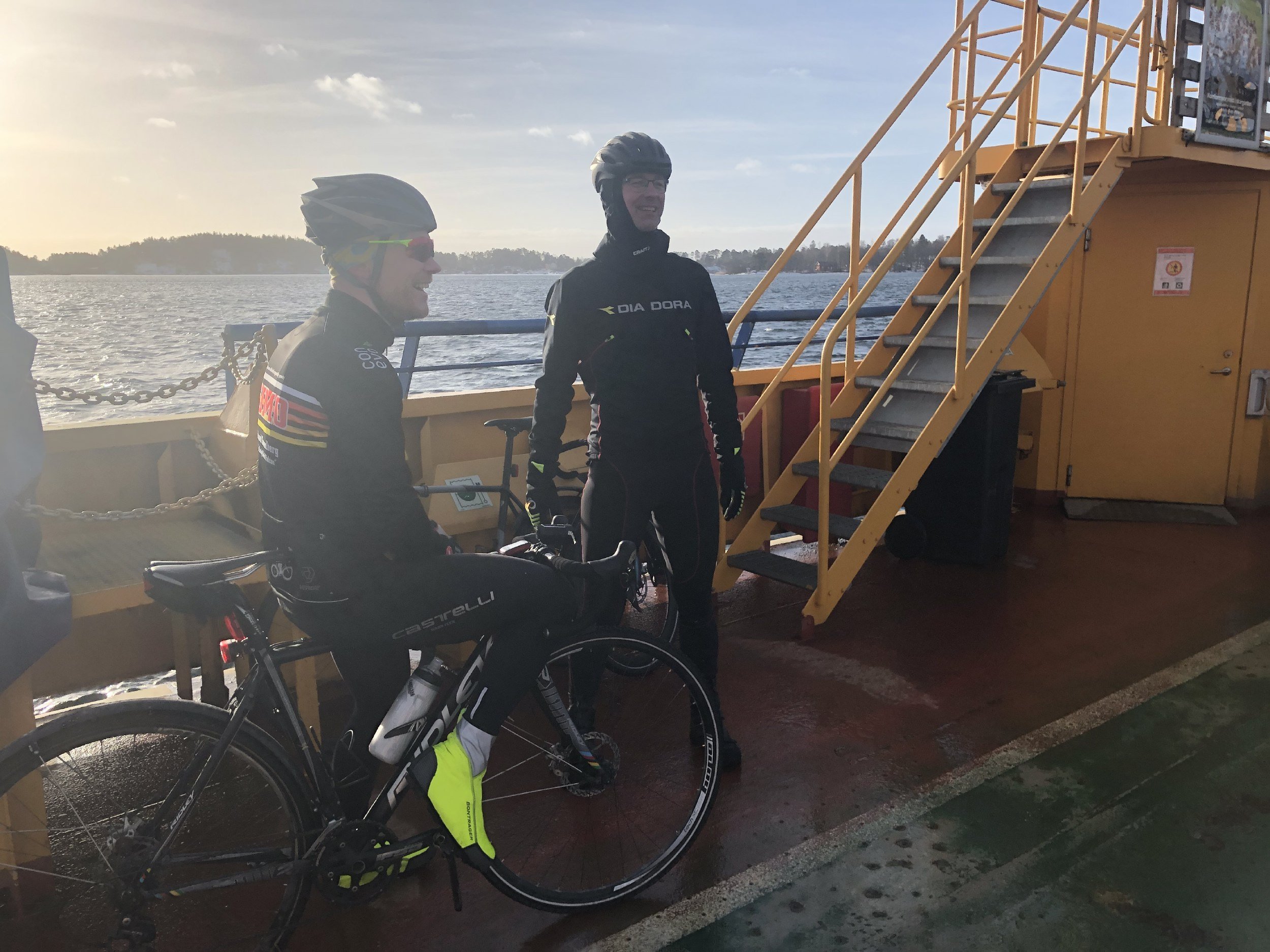 Being the host of the ride, I felt a bit responsible for keeping it a group ride and not one of those shoot outs I mentioned above. However, I knew it was only about eight minutes across the island and maybe the first couple of guys could hold up the ferry for the rest…and besides, there I was on a new super racey all road bike with the latest aero wheels from 3T. It would have been wrong not to pull those pistols. 🙂 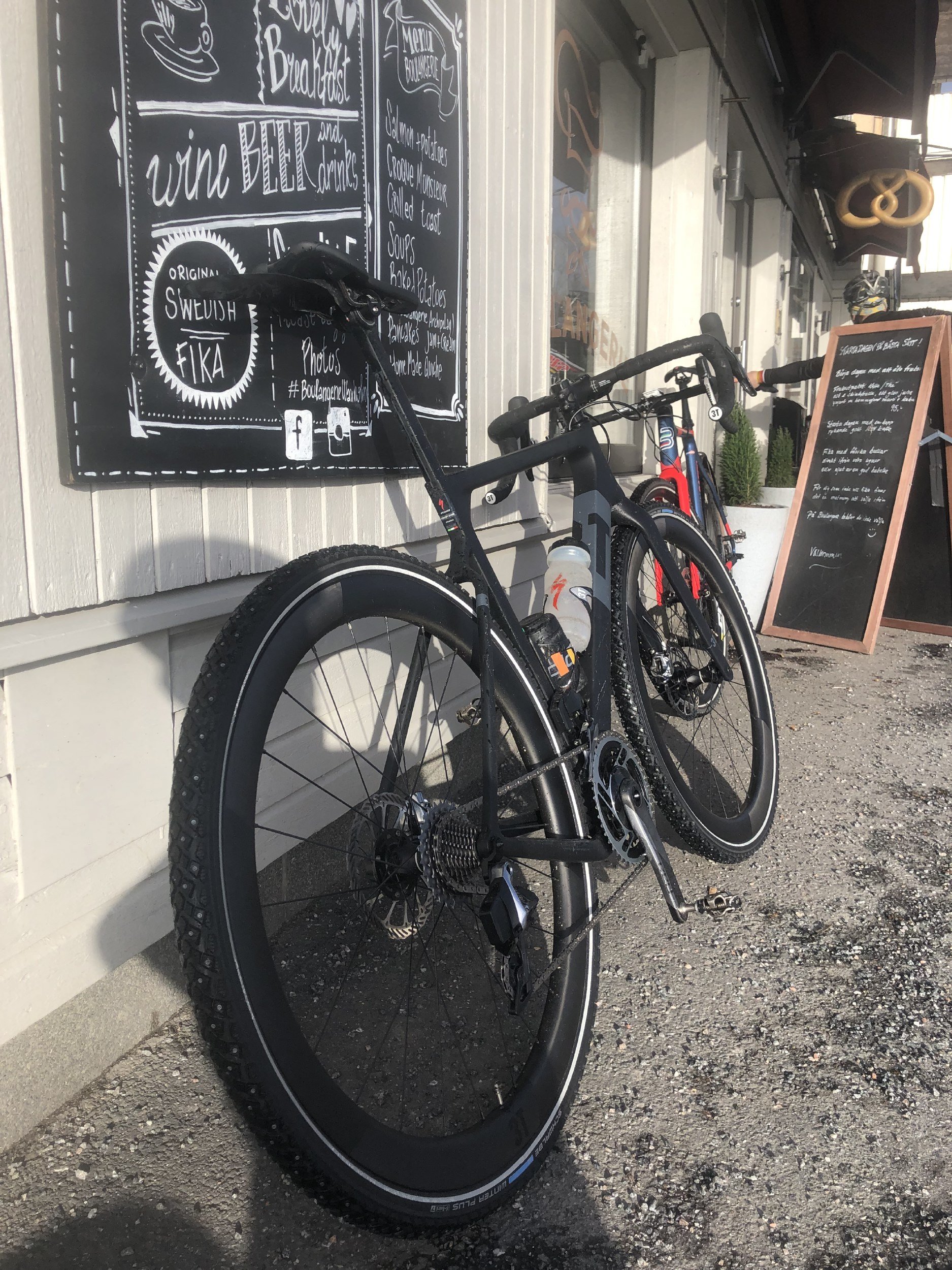 Short story, we made it to the ferry and on the other side was Vaxholm and what Swedish cyclists as well as the rest of the Swedes passionately refer to as “fika”. “Swedish fika” is a deeply rooted tradition and can therefore be used an excuse for a break almost anytime. Proposals to forego fika and hurry up will have to be very well motivated. You can always try to tell a Swede that they stop for a coffee in other parts of the world as well, but the reply might very well be, “but do they fika?”. Anyways, the concept includes a carte blanche for eating cinnamon rolls, pastry, ice cream or even having something that would cover lunch. Personally, I could sometimes get frustrated with these interruptions of the flow of a ride, but I realize that you will never win if you argue against coffee and cinnamon rolls. 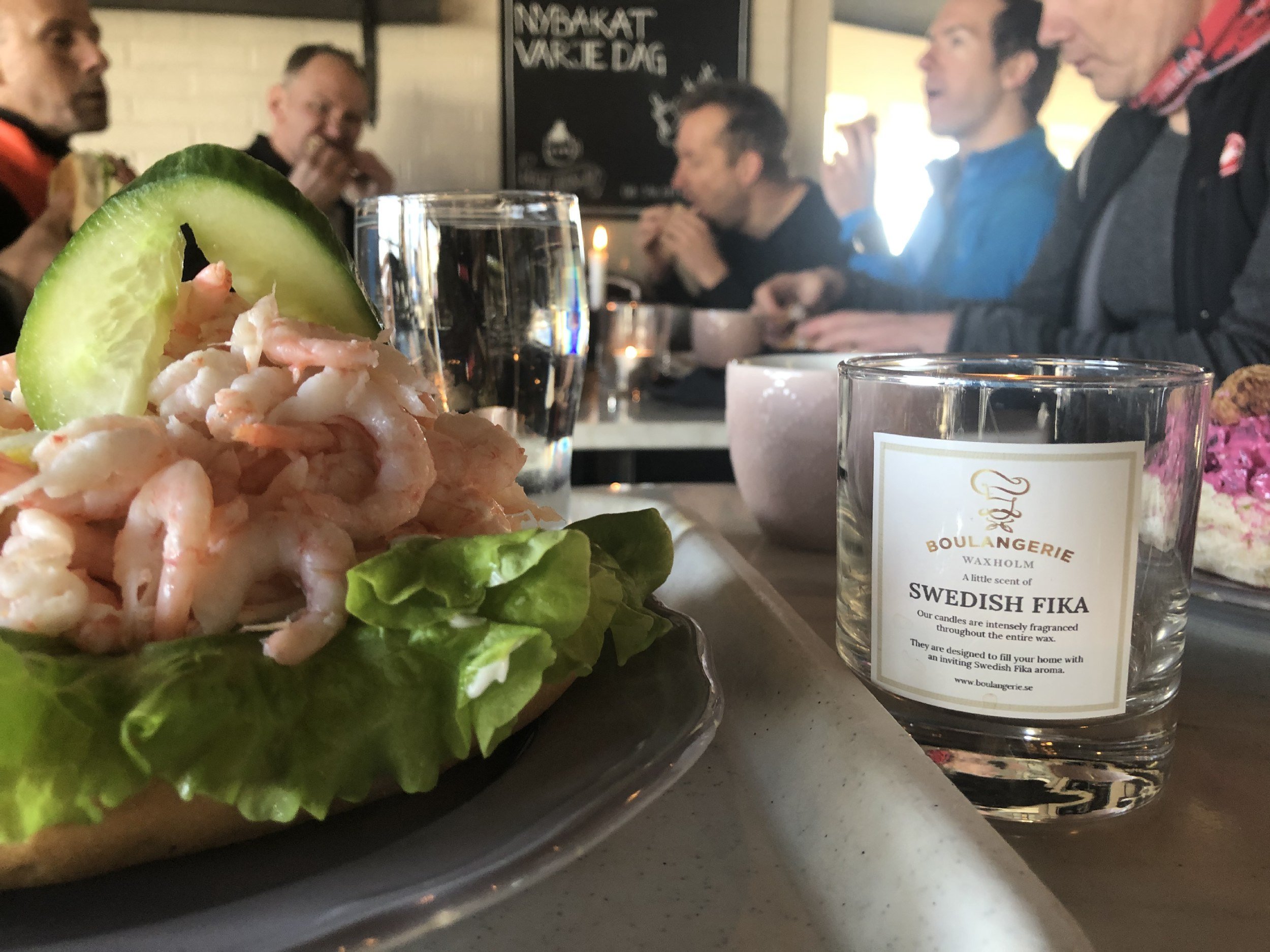 All good things come to an end and eventually we started to connect back to the heart of the city. We stopped for a picture outside of “the club house” (the Royal Palace) before the gang split up in different directions. 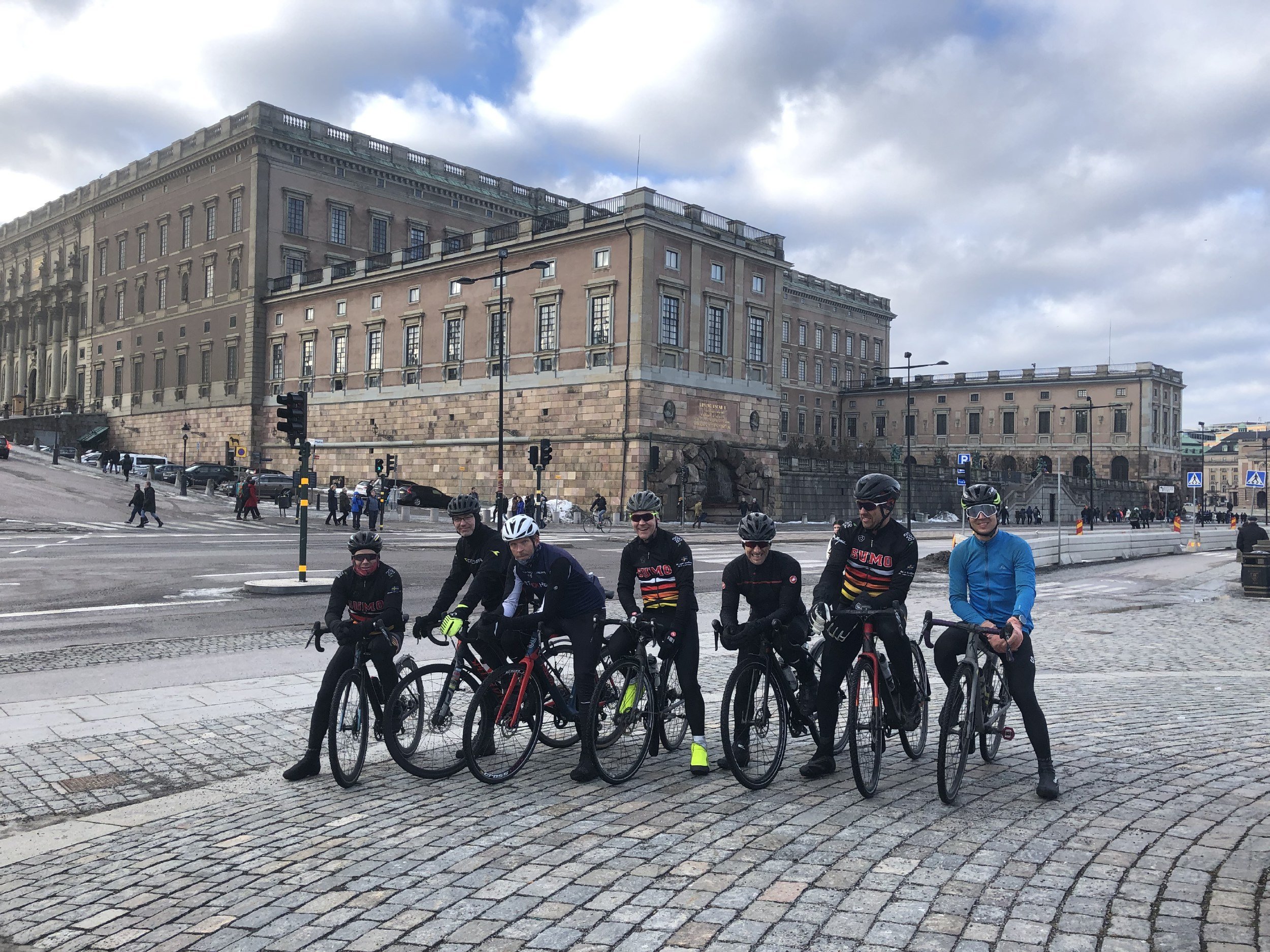 I rode home, finishing the circle of the route and did what has become my code of conduct during winter – I cleaned my bike immediately before the dirt dried up. So now there is a clean bike asking for more adventure and perhaps wishing for spring and some sweet gravel roads. 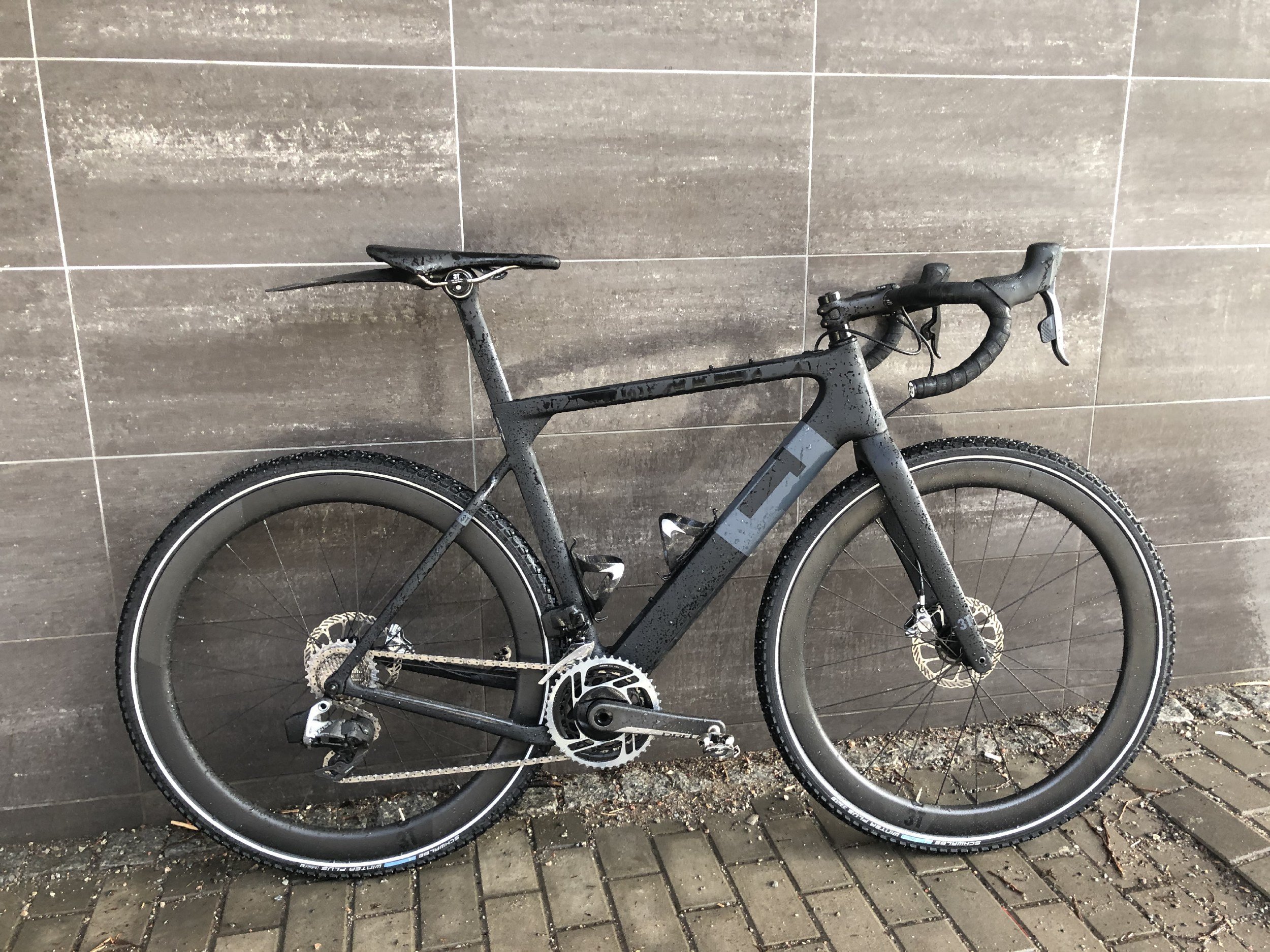