In 2017, 3T introduced the world’s first dedicated single chainring road bike, the Strada. If you are a regular reader of our blog, then I’m sure you’re familiar with it.

The advantages are clear: lighter, more aerodynamic, cleaner look and dead-simple to use. The drawback is also clear: a few gears less.

I have been thinking about 1x road bikes since my engineering graduation project, a time trial bike with a 1×8 drivetrain (better known as the Cervélo Baracchi). Then the long wait began, as I knew we needed 11-speed cassettes for it to be feasible, and 12-speed to gain more acceptance.

I had a whole spreadsheet of cassette options for 8-speed, 9-speed, 10-speed, 11-speed, 12-speed, 13-speed, and last year I found out that somebody at SRAM had the exact same thing. As you can see from their product line, they also realized 11 was the magic number!

A year after we introduced the Strada, SRAM asked us to come to San Luis Obispo to ride prototypes of their new 12-speed drivetrains and provide them with feedback. We rode what will now be known as the Red AXS eTap drivetrain and had very animated discussions on what the perfect 1×12 drivetrain should look like.

No offense to people in sales, but it was very nice to have a frank discussion with engineers who are trying to look around the corner of where drivetrain development will go, even (or especially) if you sometimes catch a sales guy roll his eyes, either out of boredom or because the engineer just said something that wasn’t the company line.

It was at that same meeting that SRAM asked us to be a launch partner for the new Red AXS, which really is an honor for us. Just think about it: 2 years earlier, 3T had never made a bike. Now we we were asked to be one of a handful of brands to offer bikes with this new drivetrain on launch day.

We had one hesitation: we didn’t want to be a launch partner for just 1x. Some people feel that we’re somehow “against front derailleurs”. But really, “some of my best friends use them” (including one who tells me regularly he will NEVER give up his front derailleur, not even if it’s 2×20). We like the options offered by deleting the front derailleur, and I personally find it a rather crude bike component, but for the next few years there will be people with good reasons to want one.

So why do we like the new SRAM Red AXS groupset? For starters, it is a super-easy group to install. Just like with the previous Red system, there are no cables to run, no battery to put inside the frame or seatpost, just bolt it on and you’re ready to go.

Some people seem to prefer one central battery, but I like how each part (shifter, front & rear derailleur) has its own battery. It also means that you never really run out of power if you forget to charge, because the batteries are interchangeable. If you run out of power on the rear, you can always shift the front battery to the rear and keep shifting there. Of course, if you run 1x, you can’t do that, but you can just put one tiny battery in your jersey or toolbag.

The shifting itself feels faster and crisper than before, while the levers provide a very nice shifting feel. Too many electric buttons feel plasticky and dead, with a thin, hollow click, but these levers really provide a nice, solid, high-end action.

And how about those 12-speed cassettes? Well, my favorite bit is probably that they start with a 10 tooth cog. You’ll probably read comments from armchair drivetrain engineers that fewer teeth means more friction, but as we know from our 9-32 cassette (and as I also know from discussions with engineers at several drivetrain companies who have tested 9t cogs) the differences are negligible if properly designed.

Ironically the biggest reason holding back drivetrain manufacturers from starting with smaller cogs is not the engineering but the fear that customers won’t accept it, so I am glad that SRAM has taken the plunge to do what’s right, not what’s expected.

By starting with a 10, your first (big-gear) steps are slightly bigger), and keep more cogs for the meat of the cassette where you spend most of your time. For example, a 10-28t cassette has these cogs:

That’s a big improvement over an 11-speed 11-36 cassette which has roughly the same range but only 1 tooth jumps for the first three cogs:

Enough with the tech

So that’s the technical side of it, of course all that matters in the end is how it works on the bike. Today we’re introducing 3 new bikes with the Red AXS eTap drivetrain, and here is what the new groupset means for these three bikes:

The conundrum of the Strada is very simple: Most people who try it like it, but the vast majority of people never try it because they think they won’t like it.

The Strada experience really has three sides to it: the comfort thanks to the bigger tires, the speed thanks to the aerodynamics, and the shifting with 1x.

The first two almost universally attract rave reviews, and in particular the combination of the two surprises people. When you see the frame, “comfort” is not the first word that pops into your head, so when you then get on the bike it is a really surprising disconnect between your expectation and the actual plush ride due to the wider tires.

For the 1x drivetrain, the feedback roughly splits in three groups. One group says “that’s great, I didn’t miss anything, I don’t know what the fuss is about”, and in that group you can find anything from casual riders to very competitive riders who happen to be journalists for cycling magazines.

The second group sees the potential, but will say something like “I just want one more cog”. The third group, which I always expected to be the biggest group but in fact is the smallest, are the people who say “no, I will always keep my front derailleur”.

To be fair, of course the people test-riding the Strada are already self-selecting towards liking 1x, so this is in no way a representation of the whole world. But it does show that with the addition of the 12th cog in a dedicated 1x drivetrain like SRAM Red AXS eTap, there is now a much bigger group ready to go for 1x.

So this Strada is for them, and more information about full specs can be found on the Strada page. 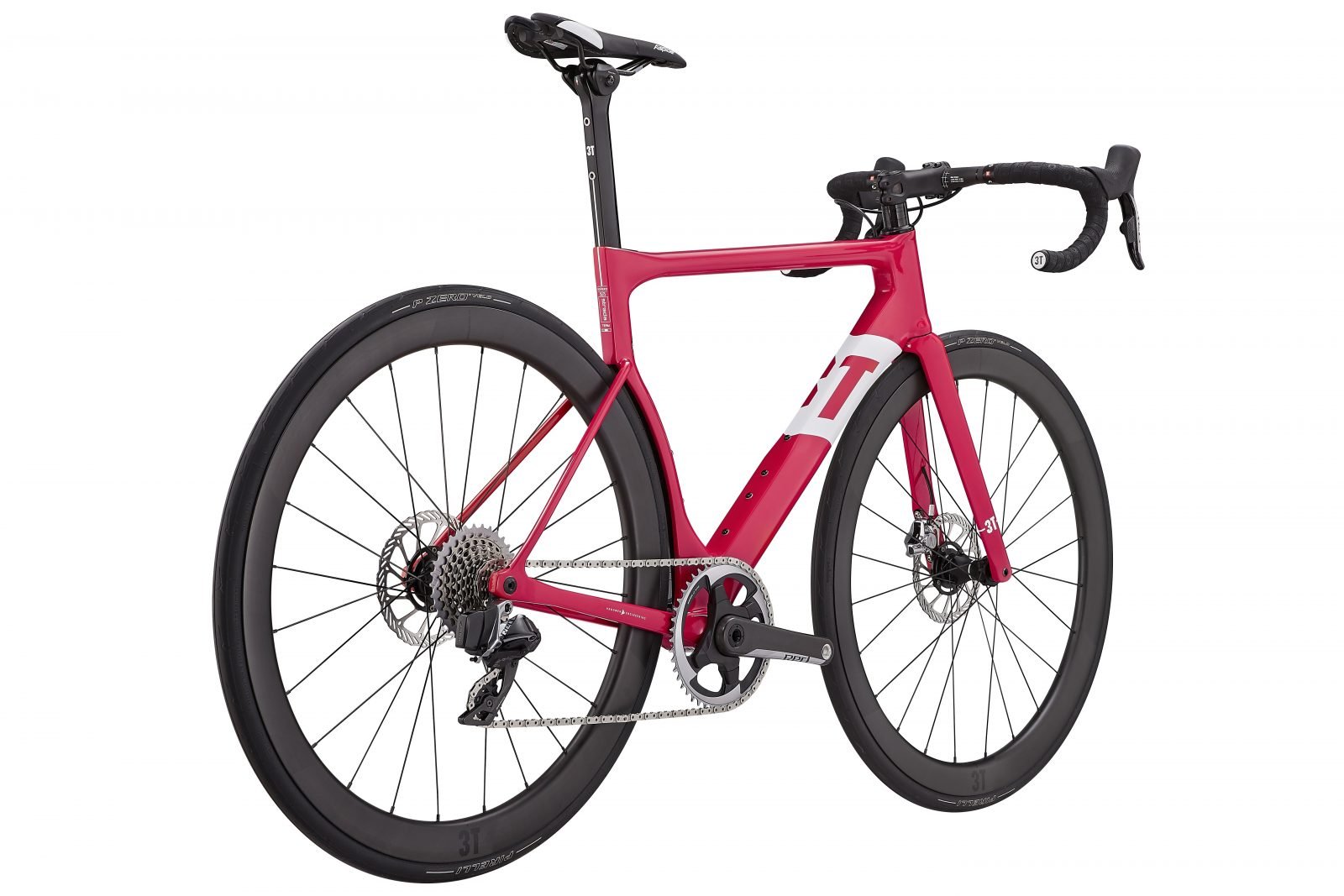 In the past few months I have written a few posts about what I see as the future of the road bike, and the Exploro Speed is the first example of that. This Exploro with Red AXS eTap has a similar philosophy but with a twist. The drivetrain with its closely spaced front chainrings and 12 cogs gives you the ability to finetune your gears almost infinitely, while the fast shifting action and front derailleur trim mean you don’t have to fuss about anything and can just concentrate on navigating your route.

You can even choose one of the automatic shift sequences, so that the system shifts the front ring before you ever get in a position of crossing your chain. Add the aero wheels and overall high end spec and it is clear this bike is geared towards pure speed. In fact, just switch the tires for road tires and you will experience the ride of a very, very good road bike.

The standard tire spec however is the WTB Riddler, one of the great gravel tires of the world. This regular test winner provides fantastic grip, great puncture protection and low rolling resistance to give you a fun ride on almost any surface. You may never even feel the need to switch to road tires again. More spec information on the Exploro page. 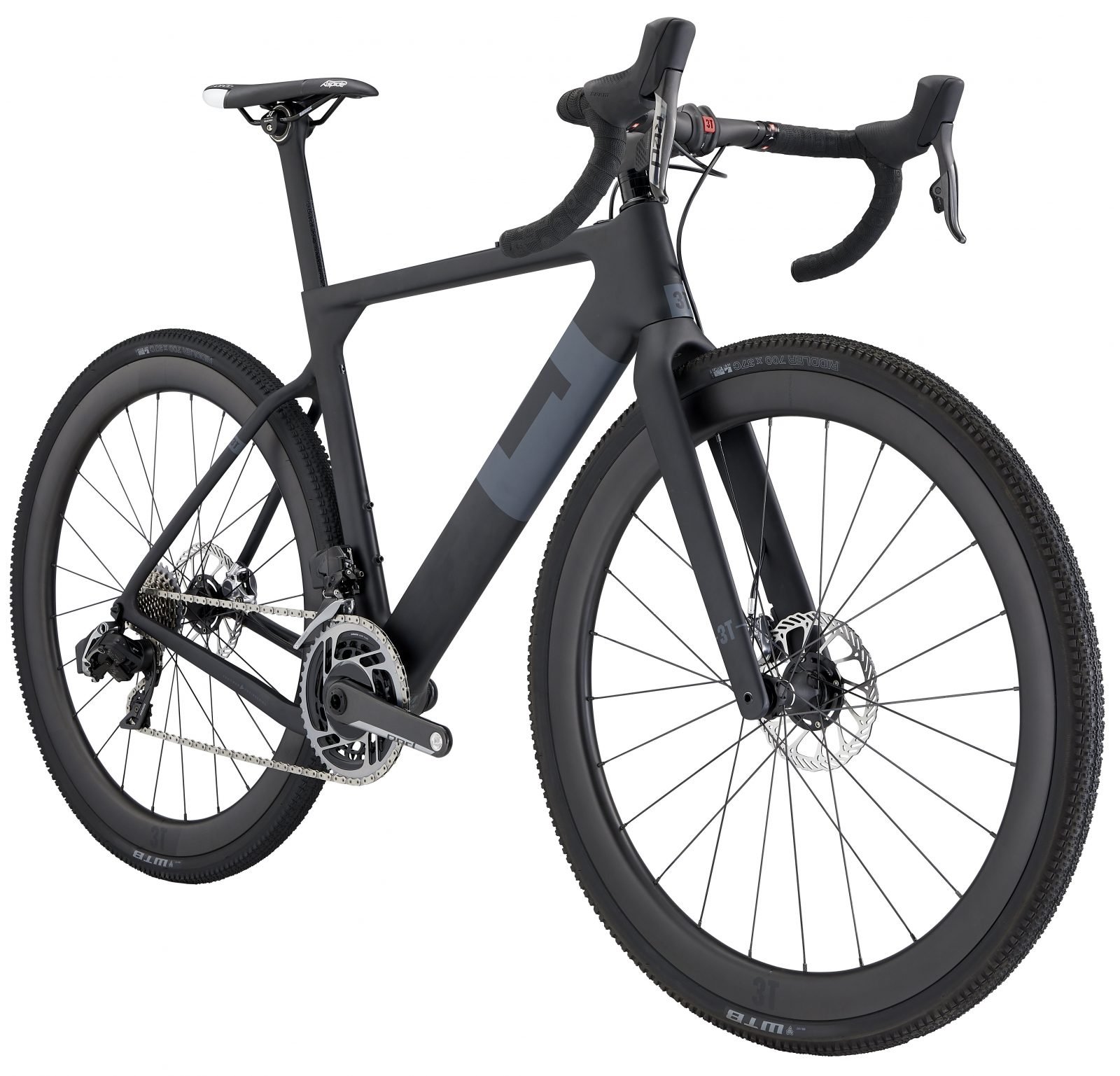 So what does SRAM’s 2×12 mean for the Due? Well, with its svelte lines and curved seat tube, the Due is a prime candidate for SRAM’s wireless groupset. Not only because of the clean looks, but also – let’s be frank – because running electric through any frame is annoying and ours is no exception.

This bike comes in a new color for the Due; Stealth black. In combination with the Red AXS, this may be the most beautiful 3T bike ever (and normally I don’t even like matte black bikes). Of course that’s all subjective. More information on the full specs here. 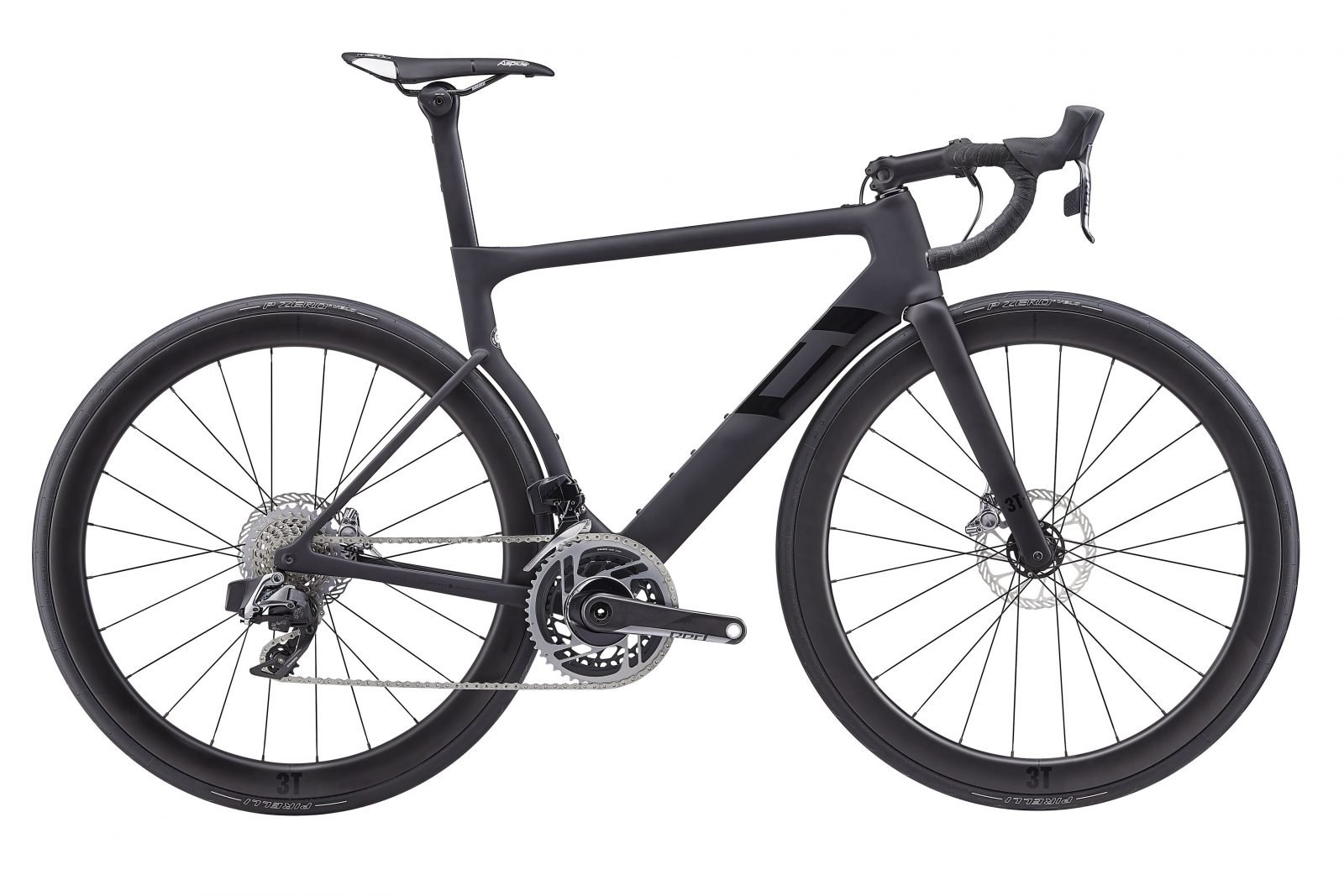 But wait, there is more. You may already have spotted the wheels on these three bikes. They are our new Discus C45 wheels, and there is a lot more to discover about them than the C45 moniker reveals. More about that next Monday, so all I will say right now is that I am super-excited about these wheels, 18 months in the making, designed from the ground up by an all-star team at 3T. Probably the most fun aerodynamic project I’ve ever done.

The following retailers already have some of our new bikes in stock:

You can see all the specs of the Strada Red AXS eTap on the Strada product page, for the Strada Due AXS eTap here and the Exploro AXS eTap here. To be the first to hear about the new wheels, just make sure you are subscribed to our notifications.