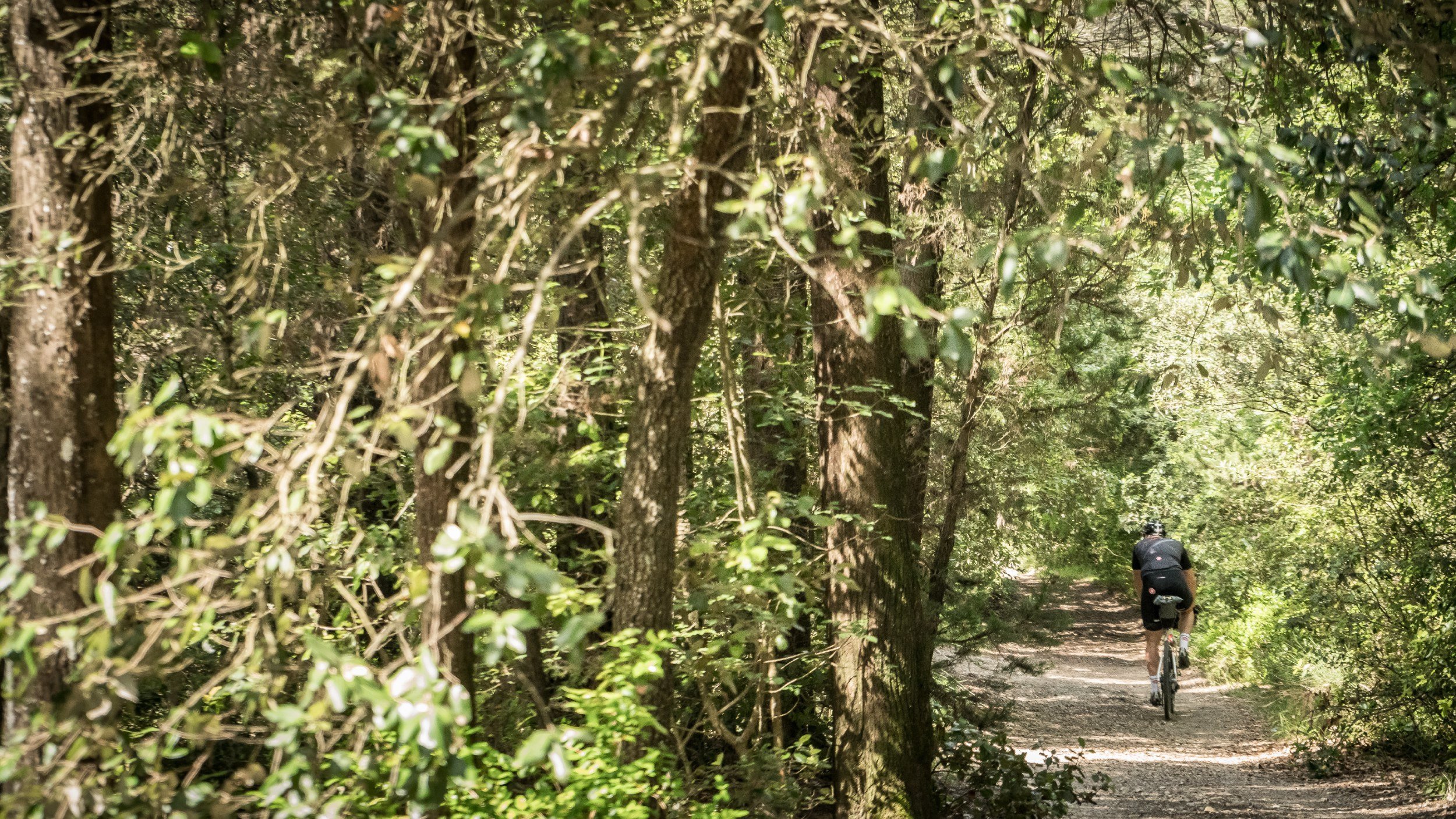 Knowing the famous “Tuscany Trail” race passed through Florence, near to our location, we decided to download the official GPS route and ride ourselves at least a good part of this mountain bike race. In our case, that section was from Artimino to the medieval village of Volterra. For the second day, and to go back to Artimino, we went the old-school way, and designed a loop route over a paper map,  which we created in a way that the track went to Florence downtown (and Ponte Vecchio) to finish our route with a bit of city tourism as well. It was a perfect weekend on Tuscany with plenty of Strade bianche, capuccinos and (almost) perfect weather, but let Magnus tell you how it all went down:

We started our day in Artimino by joining the group of distributors that were with 3T for the launch of the Exploro bike. The start of the descent from Artimino is fairly technical although not very long. Once down on the flat we rode along the riverfront for a few kilometres before parting with the rest of the group and starting our ride towards Volterra. The first part was quite a bit of tarmac road and Marc and I managed to keep a pretty good pace. 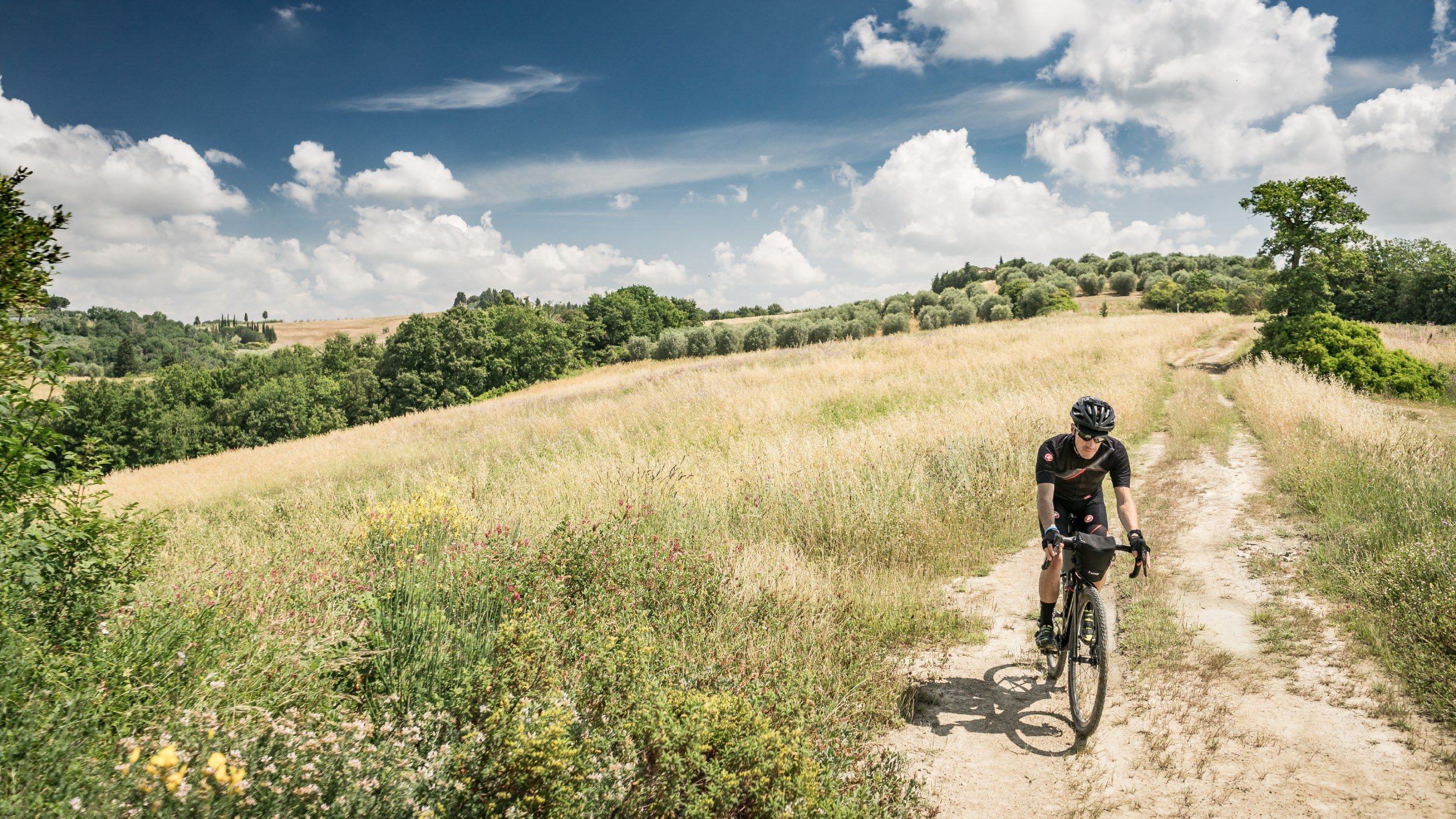 Then we hit the first “strade bianche”. These white gravel roads are now famous in this part of the world, after the World Tour boys have started racing on them about 10 years ago. The road towards Volterra is a fairly undulating ride but not overly challenging. We had quite a lot of gravel mixed with some shorter sections of tarmac. 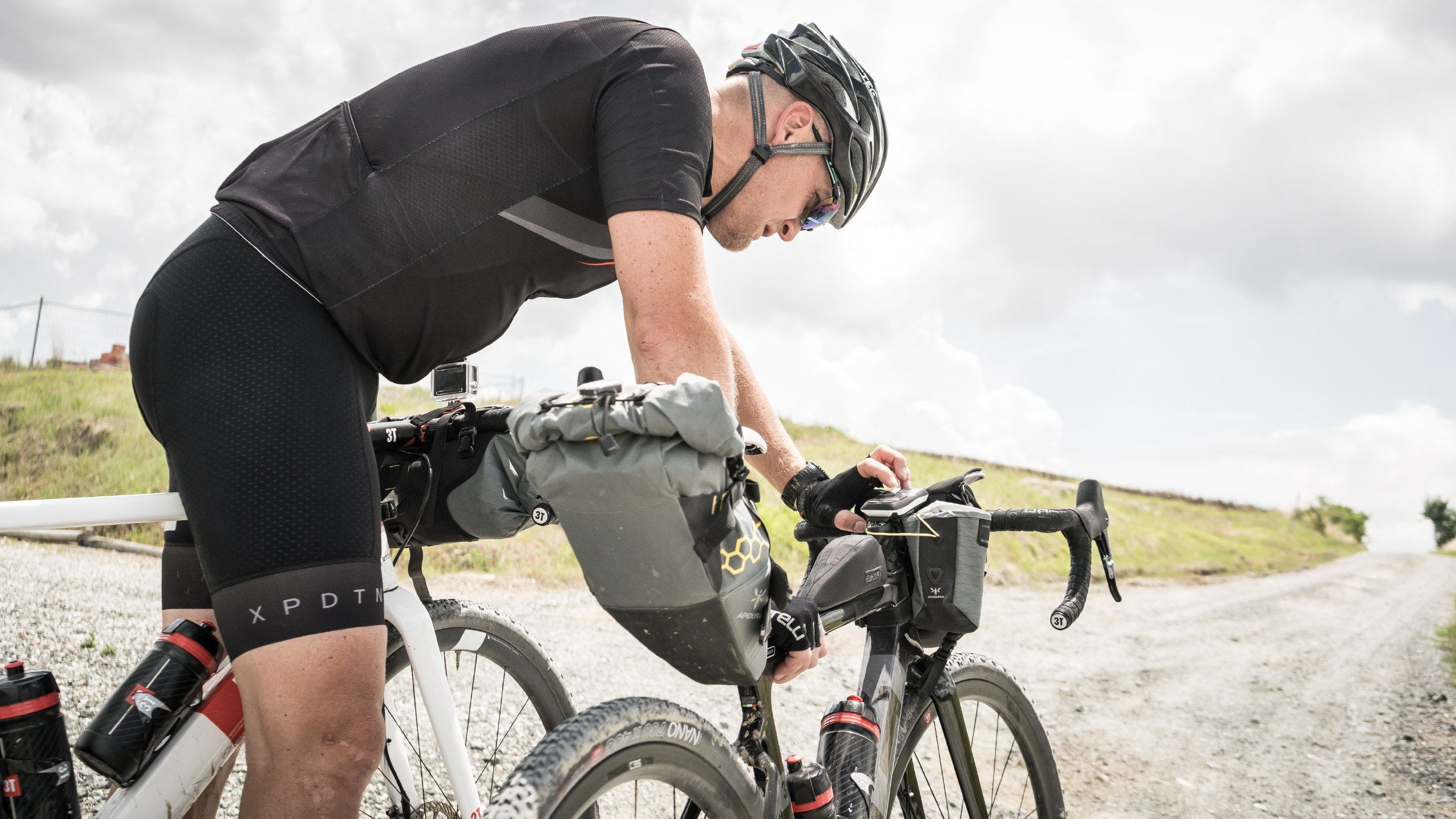 The views from these more remote roads were even more stunning than the normal roads you would drive in this part of the world. We were also blessed with a clear blue sky and the warm weather helped to make this ride even more enjoyable. 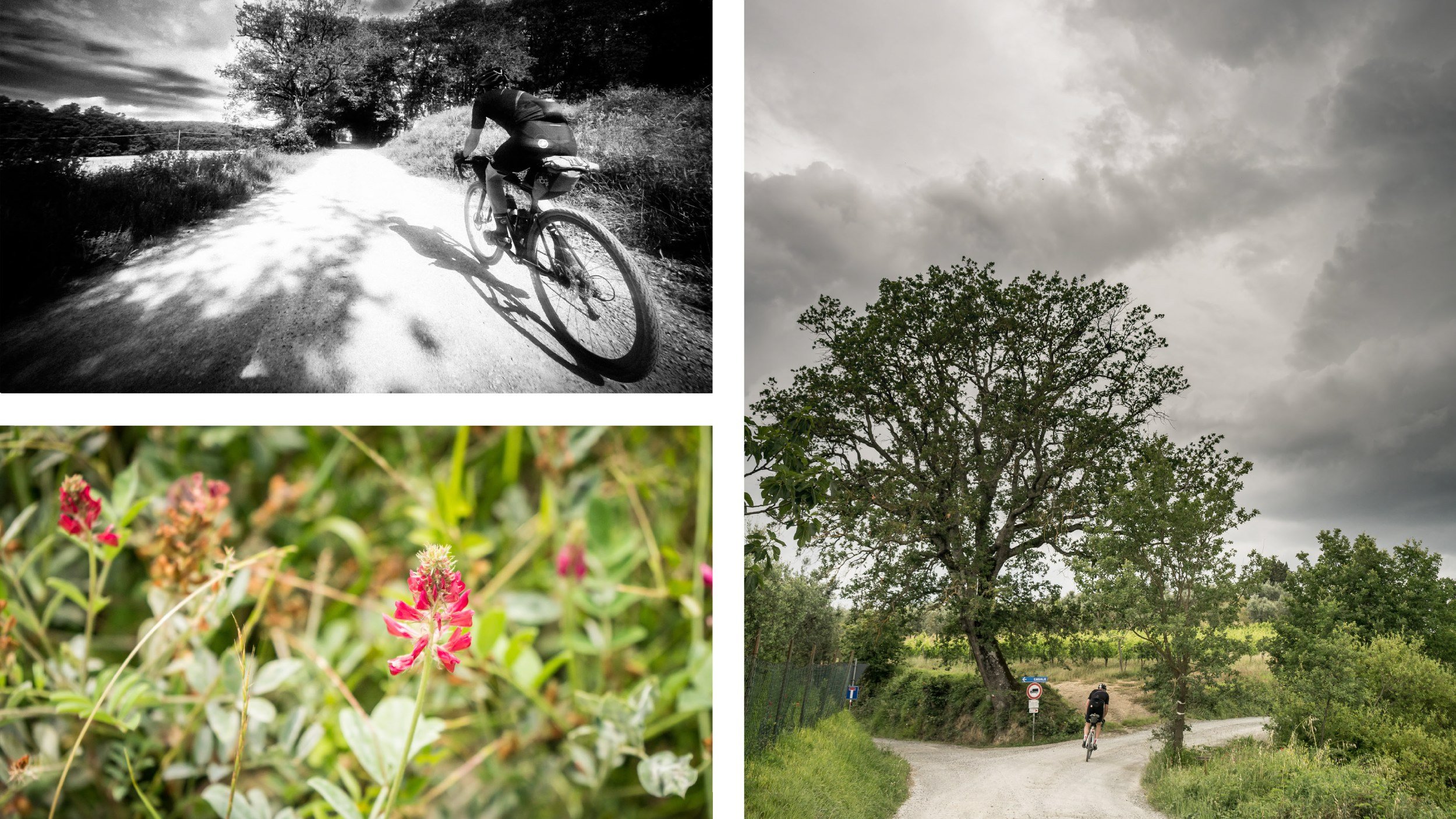 Once we were close to Volterra we realized that the town sits up on a pretty big hill and the climb up to the city walls is very steep indeed. We were both struggling to get up the climb on our 42×36 gearing and came to an agreement that a 38 chainring would have been nice on the front. 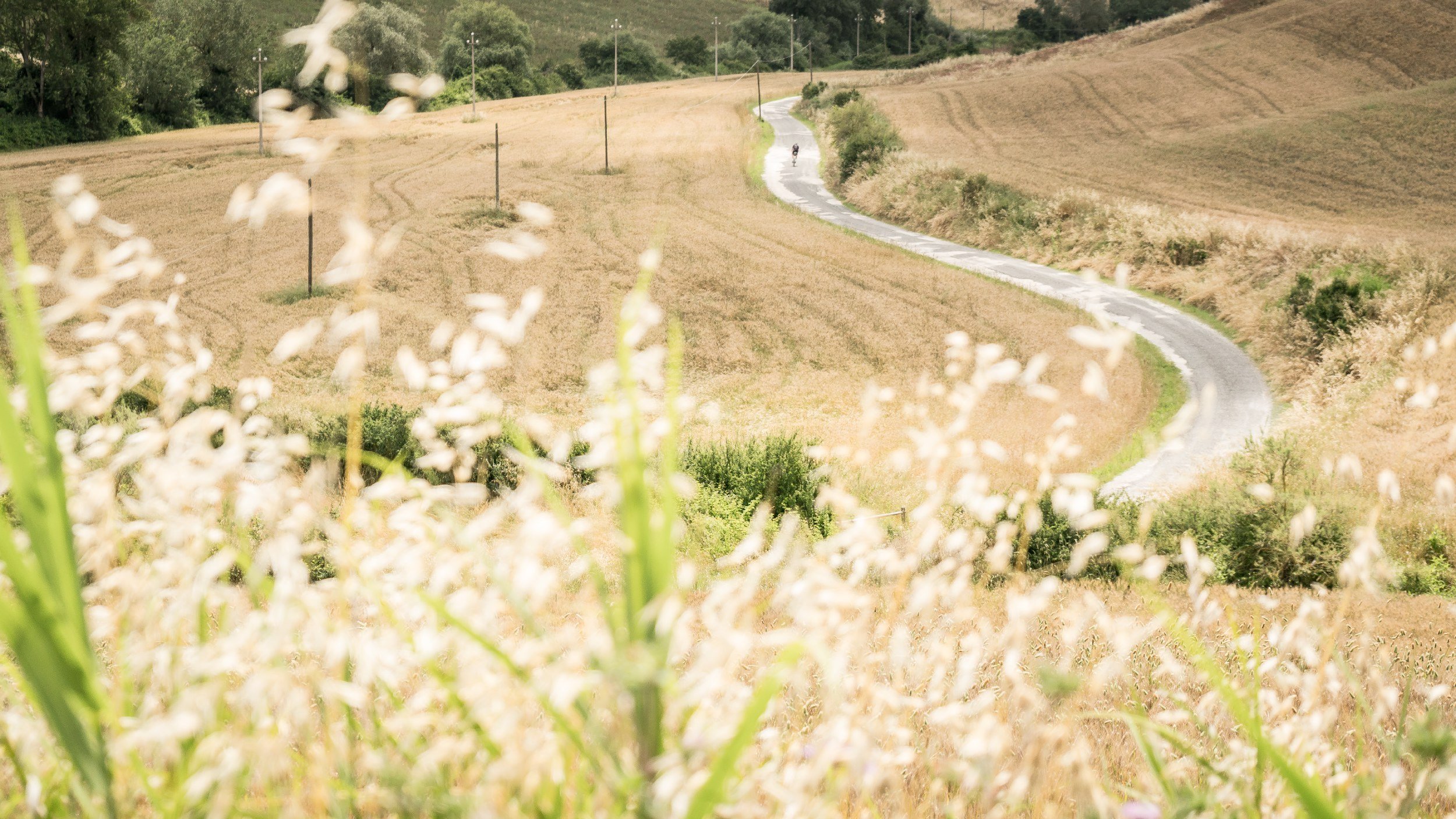 Once up in the city we rode around and took in the sights before finding our hotel where we had a quick shower and cleaned some kit. Marc also got to learn the famous trick of the towel tumble dryer (much to his amusement and I think it’s fair to say he was pretty impressed). What you do is lay the towel out flat on the ground and then place your items of clothing flat on the towel. Then you roll the towel, thus wrapping the clothing in the towel. You then keep turning it as tight as you possibly can, then unroll it and there you go. The kit is almost completely dry, well, enough to be dry in the morning. 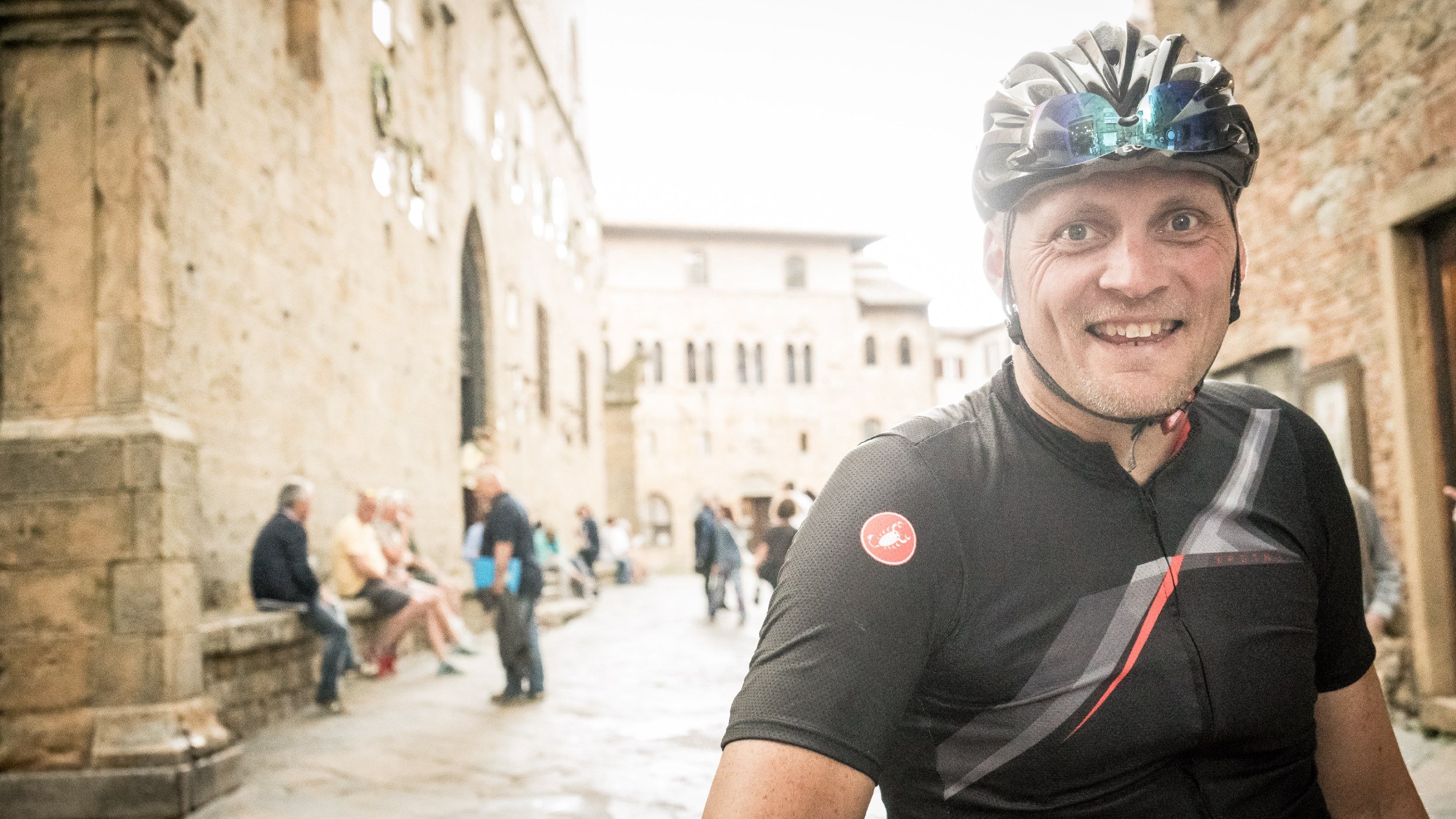 We then headed out for a late lunch and a well deserved gelato on the square. We had time for a quick sleep before we headed out for dinner and prepared the Exploro bikes for the return trip in the morning. 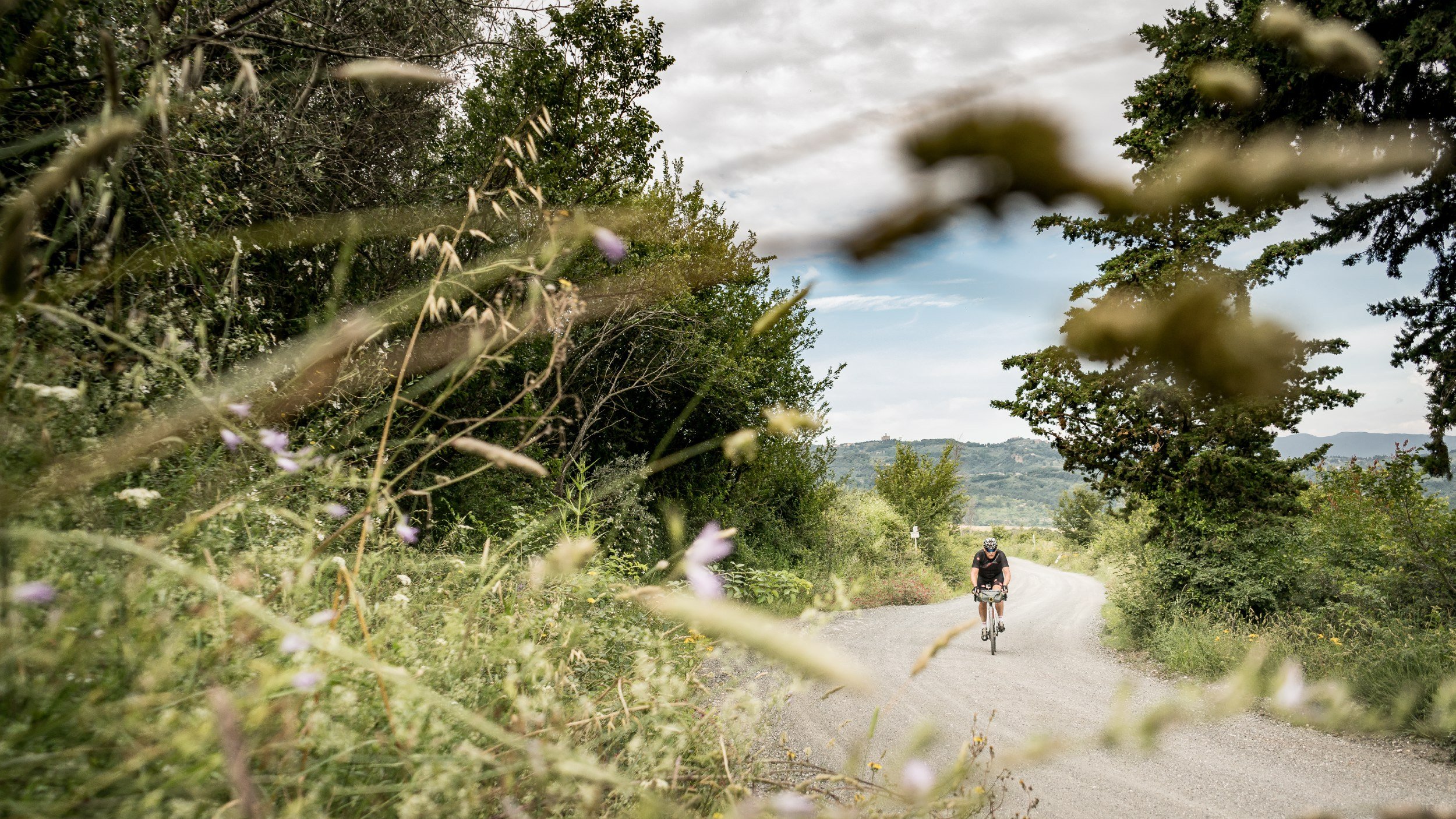 We woke up to another stunning day and had a quick Italian style breakfast before we got ready to ride. The good thing with the climb up to Volterra was that we got a nice 3-4km descent first thing before turning straight on to a gravel road that climbed for a long time. 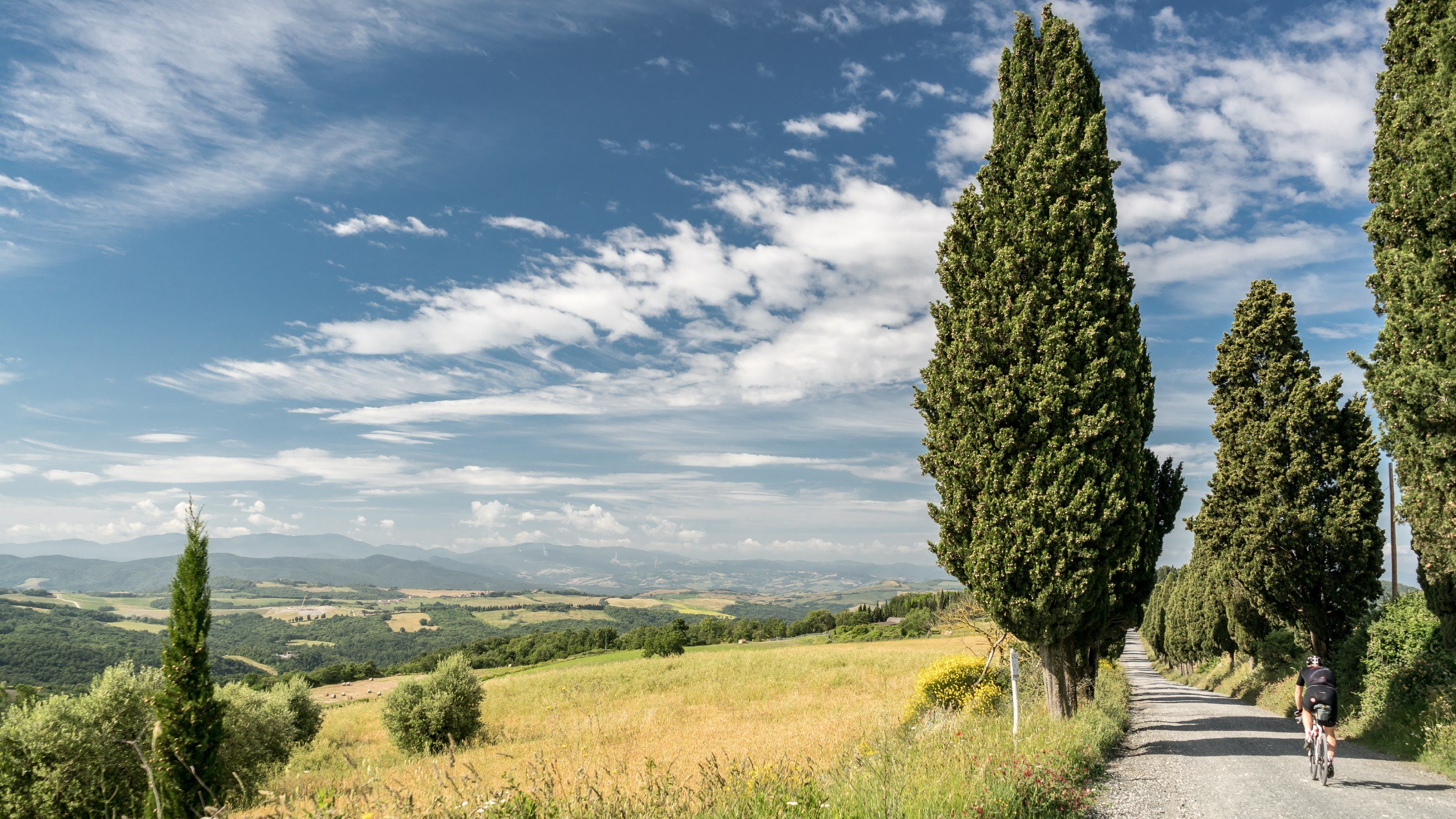 About half-way we decided a coffee would go down nicely and we made plans to stop. Luckily we did and the final 200m to the town the clouds came in really quickly. We only just made it in to the terrace before the thunderstorms started. It was a biblical downpour for about 20min, so we had 2 coffees and luckily the rain passed. So for the next bit of road we got pretty muddy as the gravel roads were soaking wet. We thought it would be a nice idea to ride through Florence on the way back, as neither of us had been there before. So we passed over the Ponte Vecchio. Pretty cool bridge that, but much too crowded for our liking and we headed out of Florence fairly quickly, in the direction of Artimino, along the river side. We were happy to see that this was all gravel as a large part of the second part of the day had been on tarmac. Finally came the last climb of the day and although pretty steep we were both happy to see the village of Artimino on top as we could enjoy a nice warm welcome by the whole 3T family and some of the dealers that had just arrived. 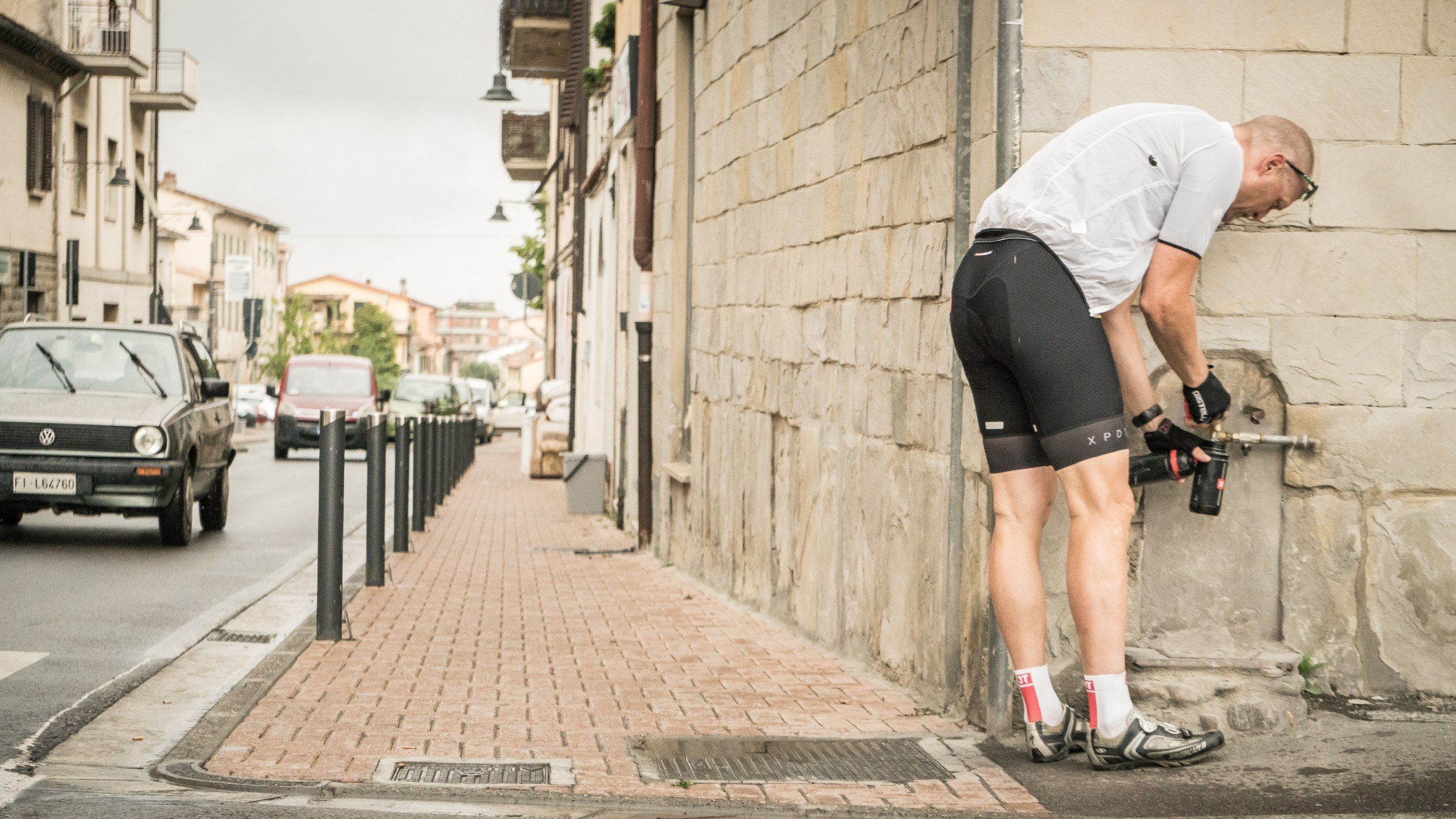 The hotel in Artimino is pretty special, it has a villa that once belonged to the famous De Medici family, a small borgo (walled village) that has been converted to apartments and great views all around. Plus their own wine, olive oil, etc. A great end to two fantastic days on this XPDTN3 on the Exploro. 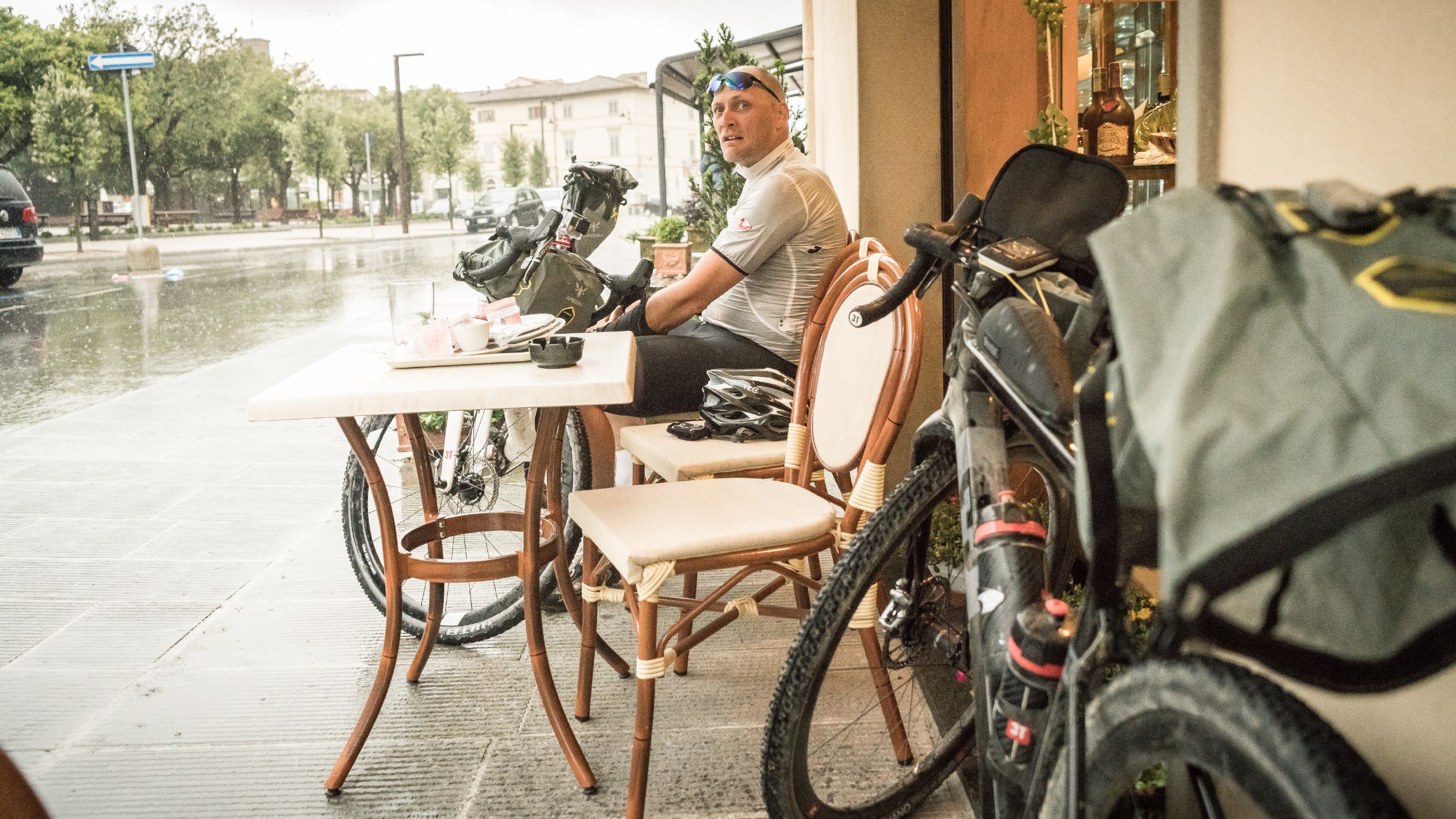 Enjoy the rest of the PHOTO gallery here: 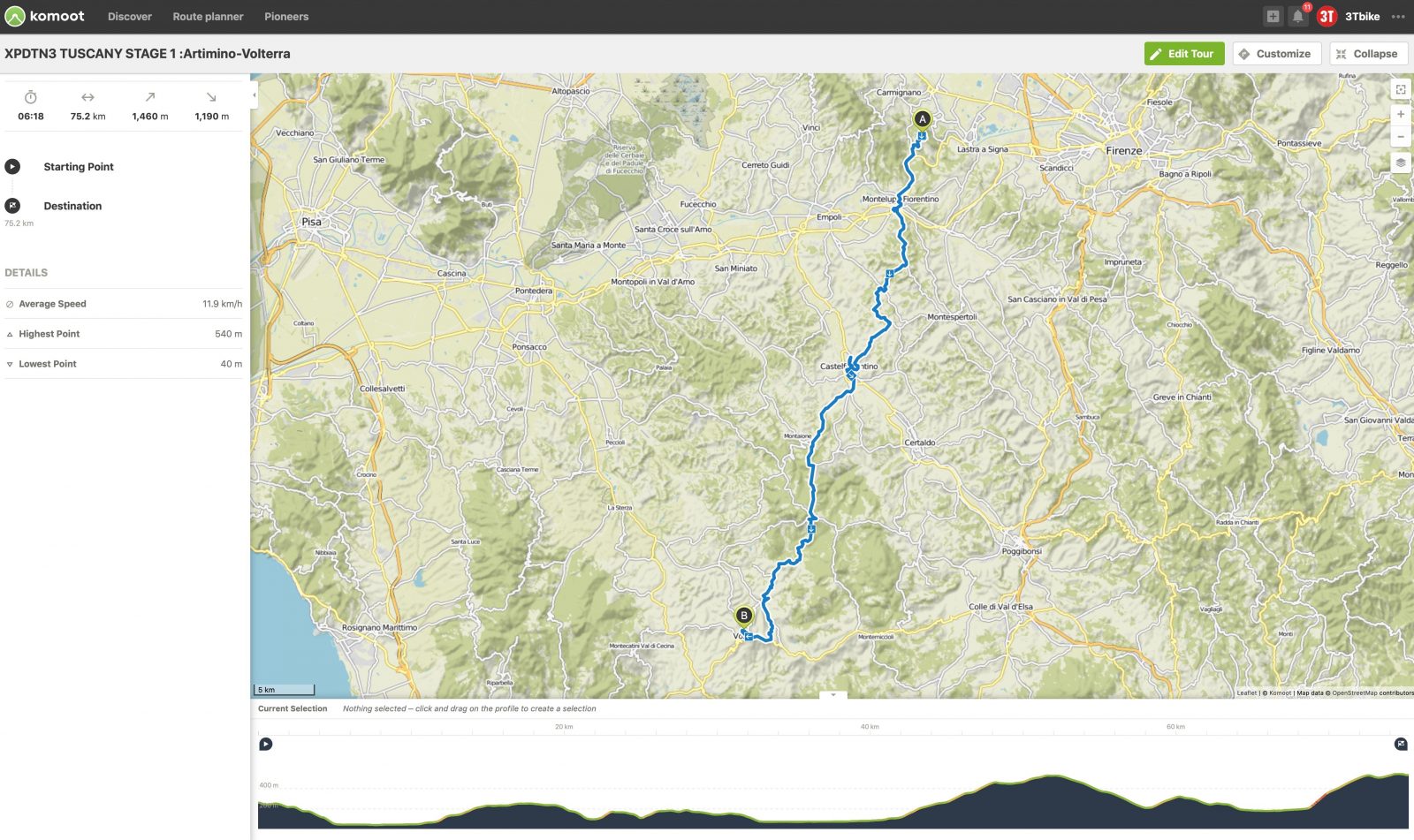 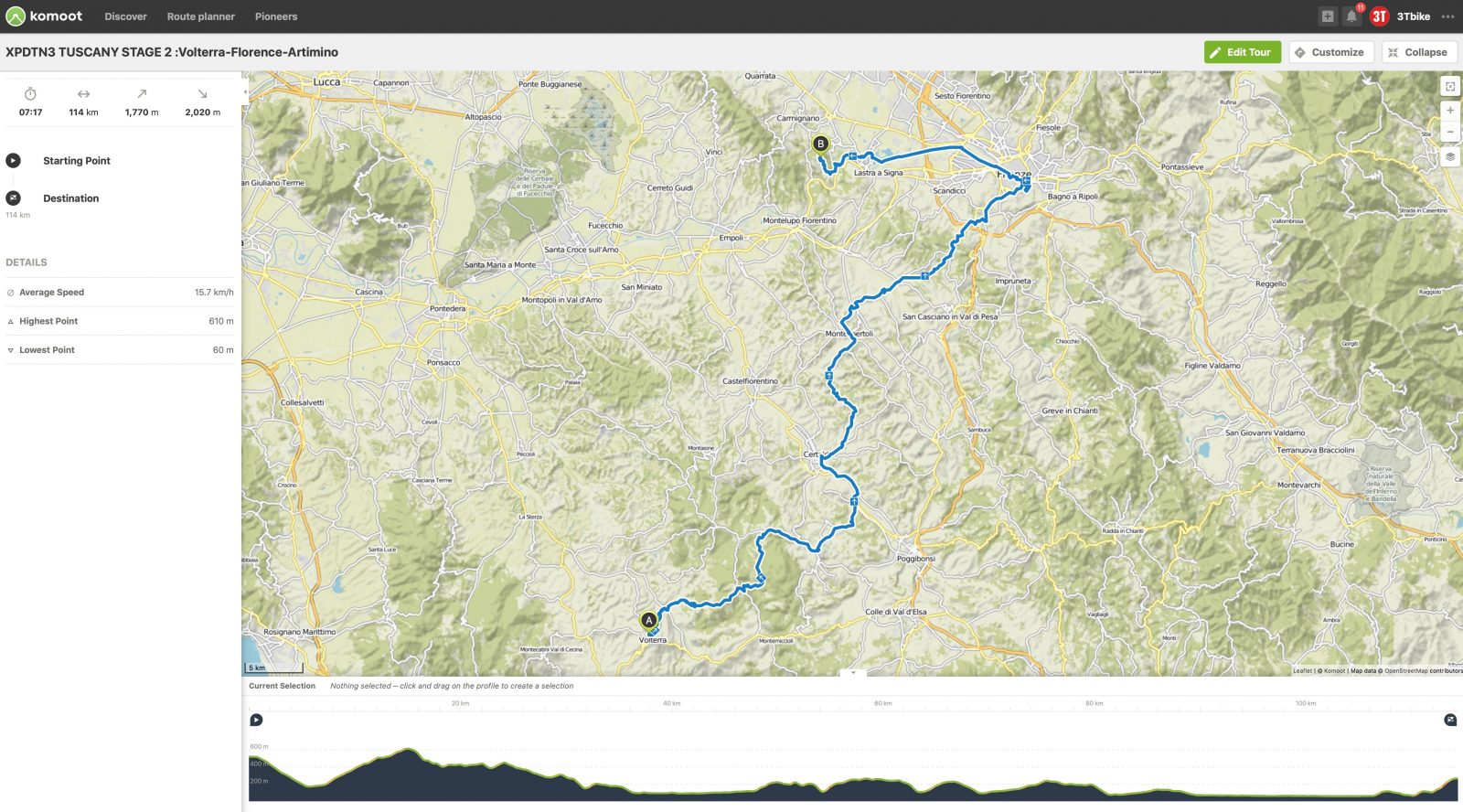 ◄ Previous Story RIMBY: Surf & Turf
Next Story ► GET CREATIVE – Spray it!
Cookies help us deliver our services. By using our services, you agree to our use of cookies.Got itLearn more
...