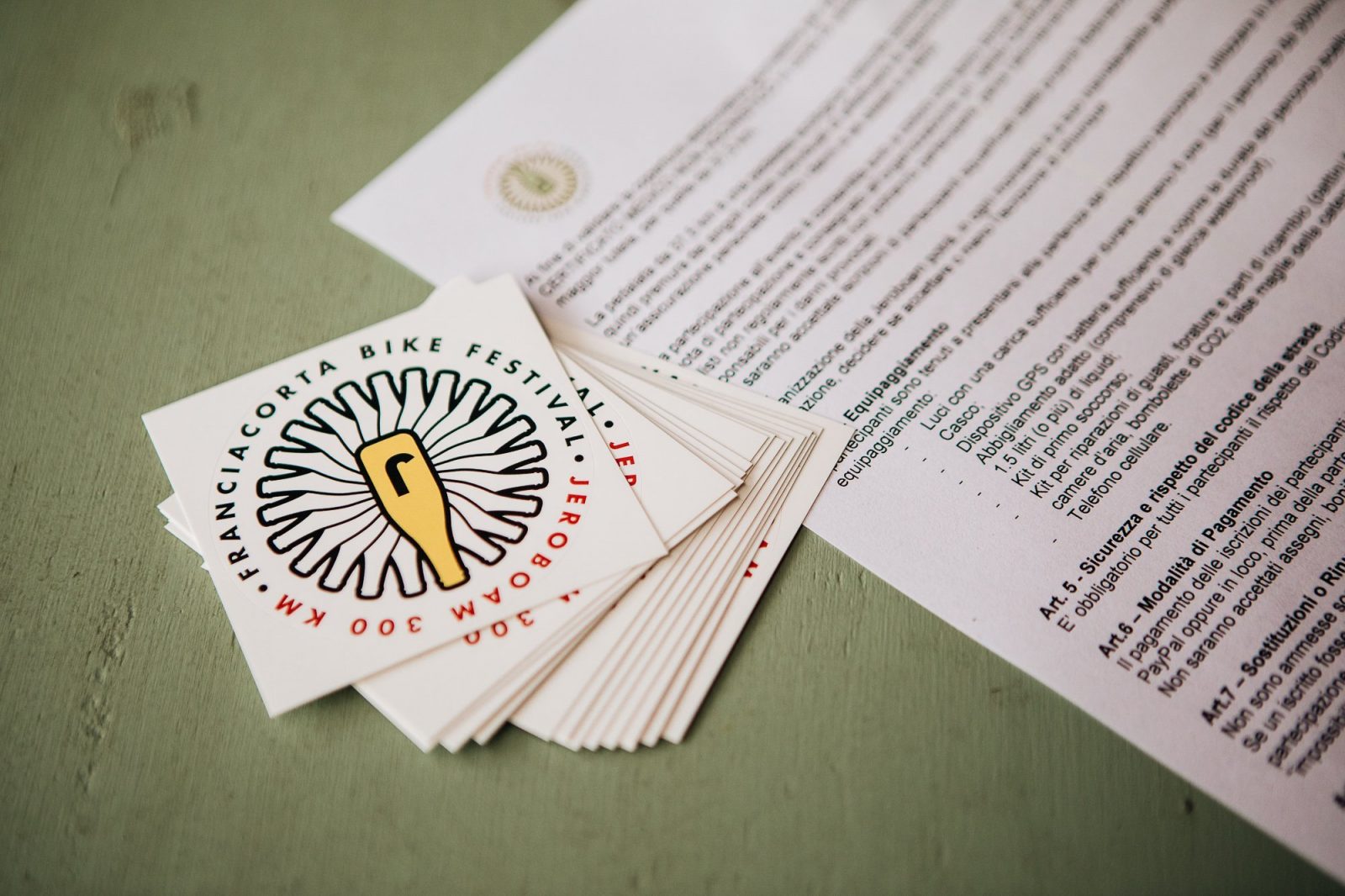 Of course, we were woefully unprepared and didn’t know what we were in for when we arrived at the Jeroboam 300. It was already too late to take a step back as word had spread around the 3T office and everybody was expecting us to carry the company colours through to the finish line! 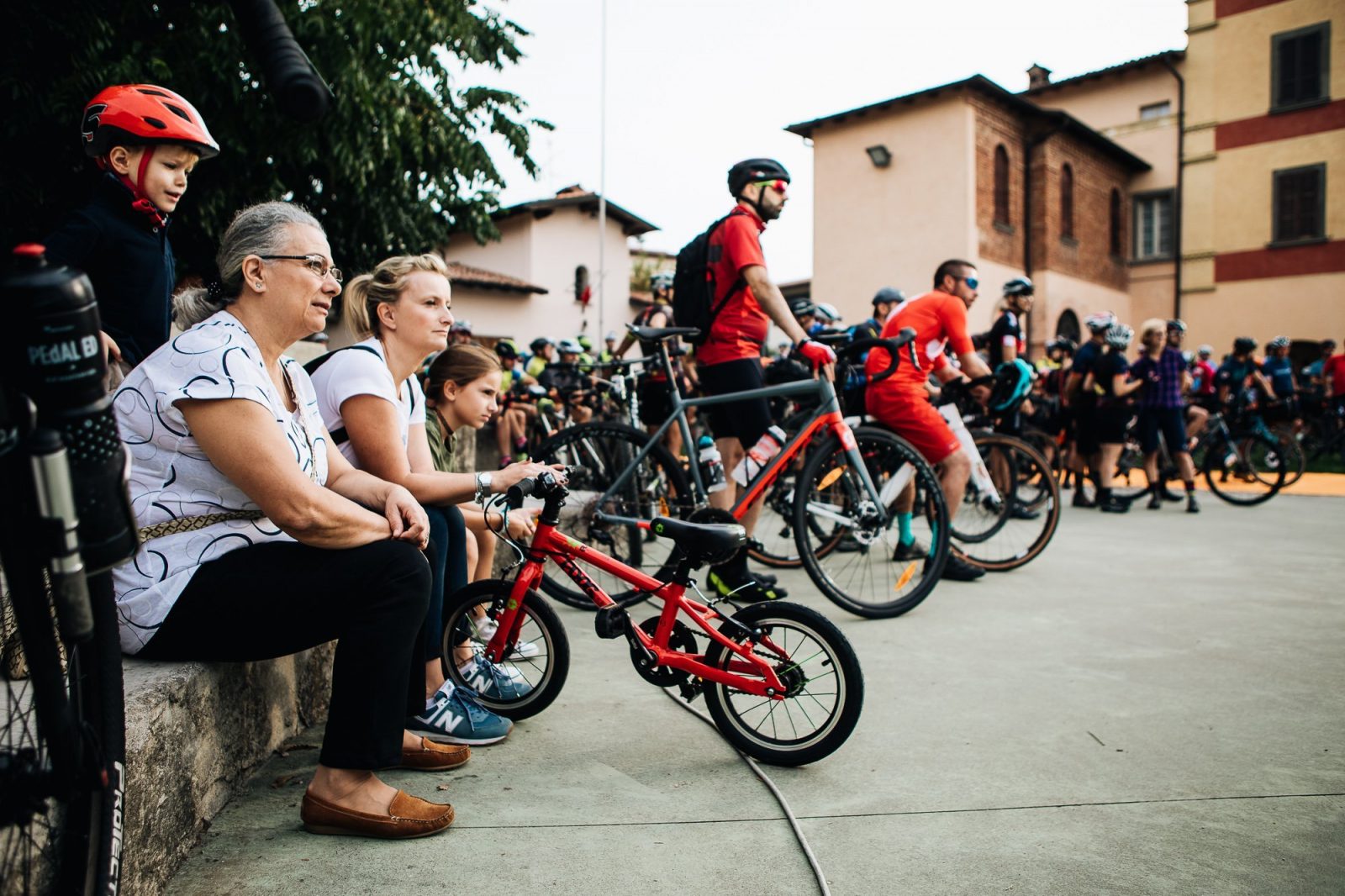 We realized that it was not going to be an easy ride at the moment that Michele (@mike_nessie) – the man behind the mountain part of the Jeroboam 300 route – told us he would use nothing less than WTB Nano 27.5”x2.1 tires on his Exploro. These tires are, officially, one of the heftiest of the massive tire range that can be installed on the 3T all-road frame (WTB Ranger 27.5”x2.25 still fits on the front – ED). 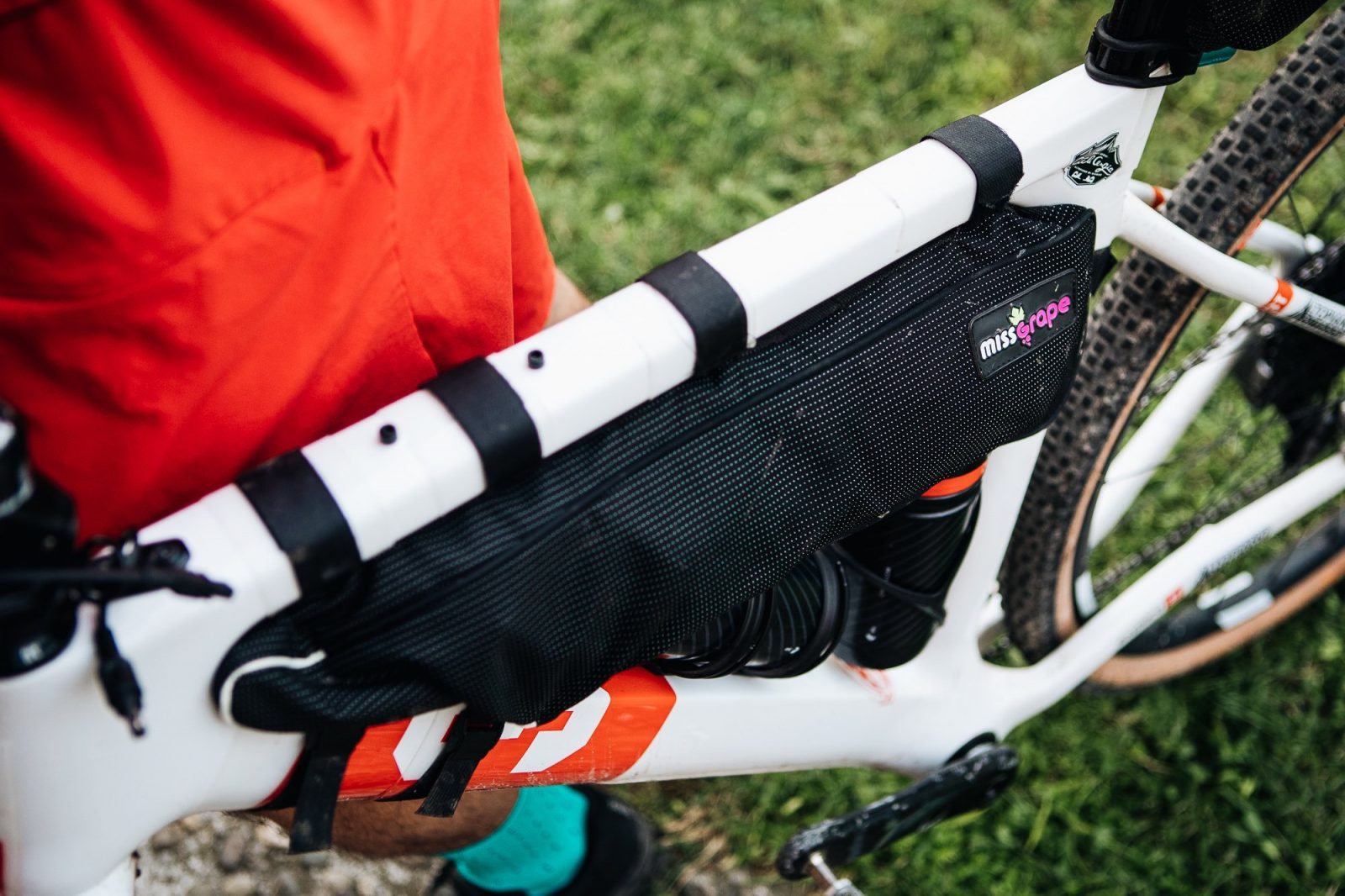 Before long, the weekend for the ride arrived, and the Friday before everybody worked hard to build the Jeroboam village in the city center of Erbusco, a small Italian town next to Lake Iseo, in the province of Brescia. Out of nowhere, the area was now full of tents, beer, music, bike workshops, kids’ playgrounds, and much more. A few hours later all sorts of bicycles and their owners would be gathering there in a peaceful invasion. 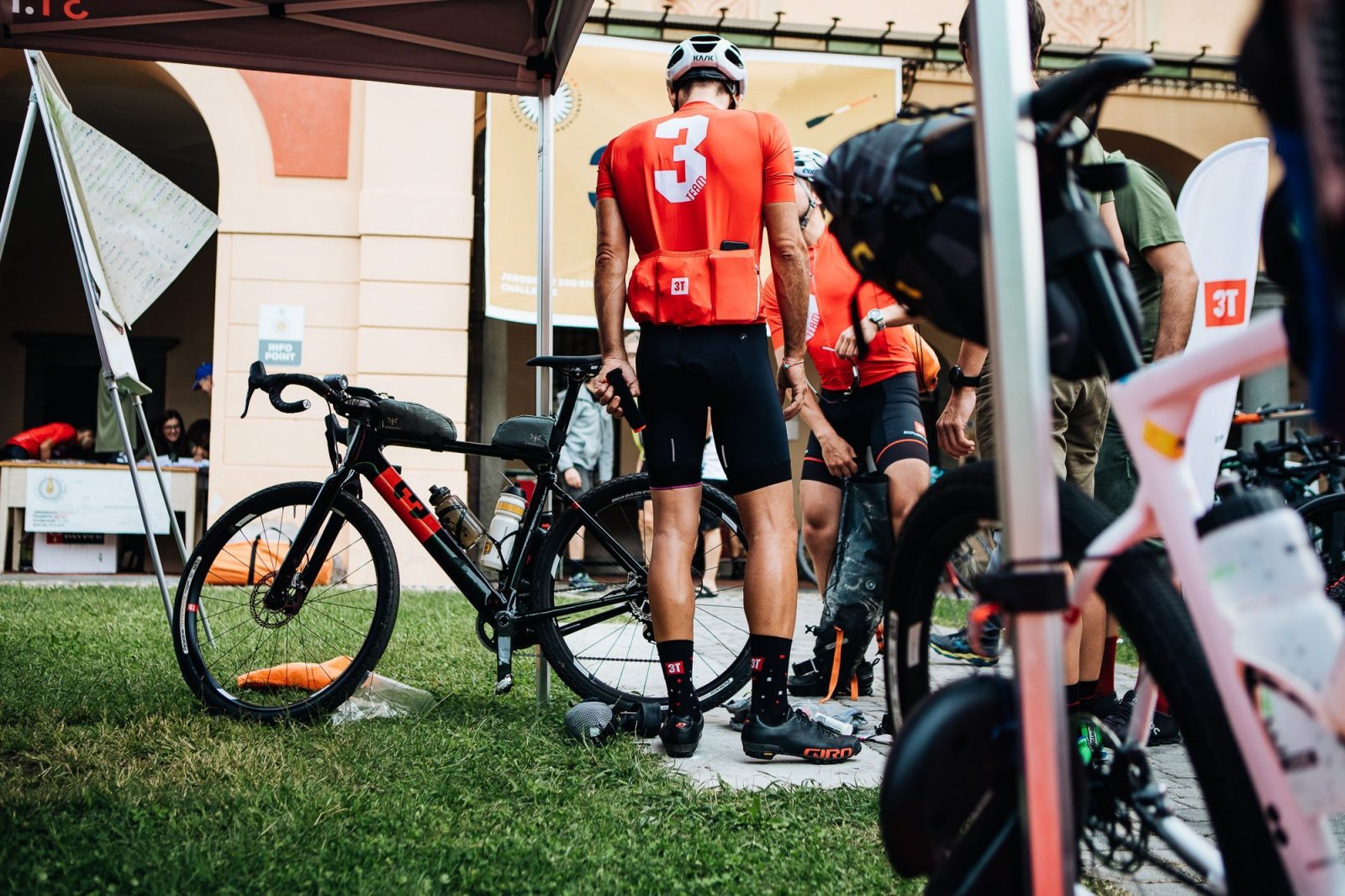 At 7 am on Saturday morning a crowd of hungry bikers in their ticking cleated shoes were already awake and ready, accomplishing almost religiously their pilgrimage to the coffee bar and pasticceria, looking for the last load of carbs and caffeine before the start. 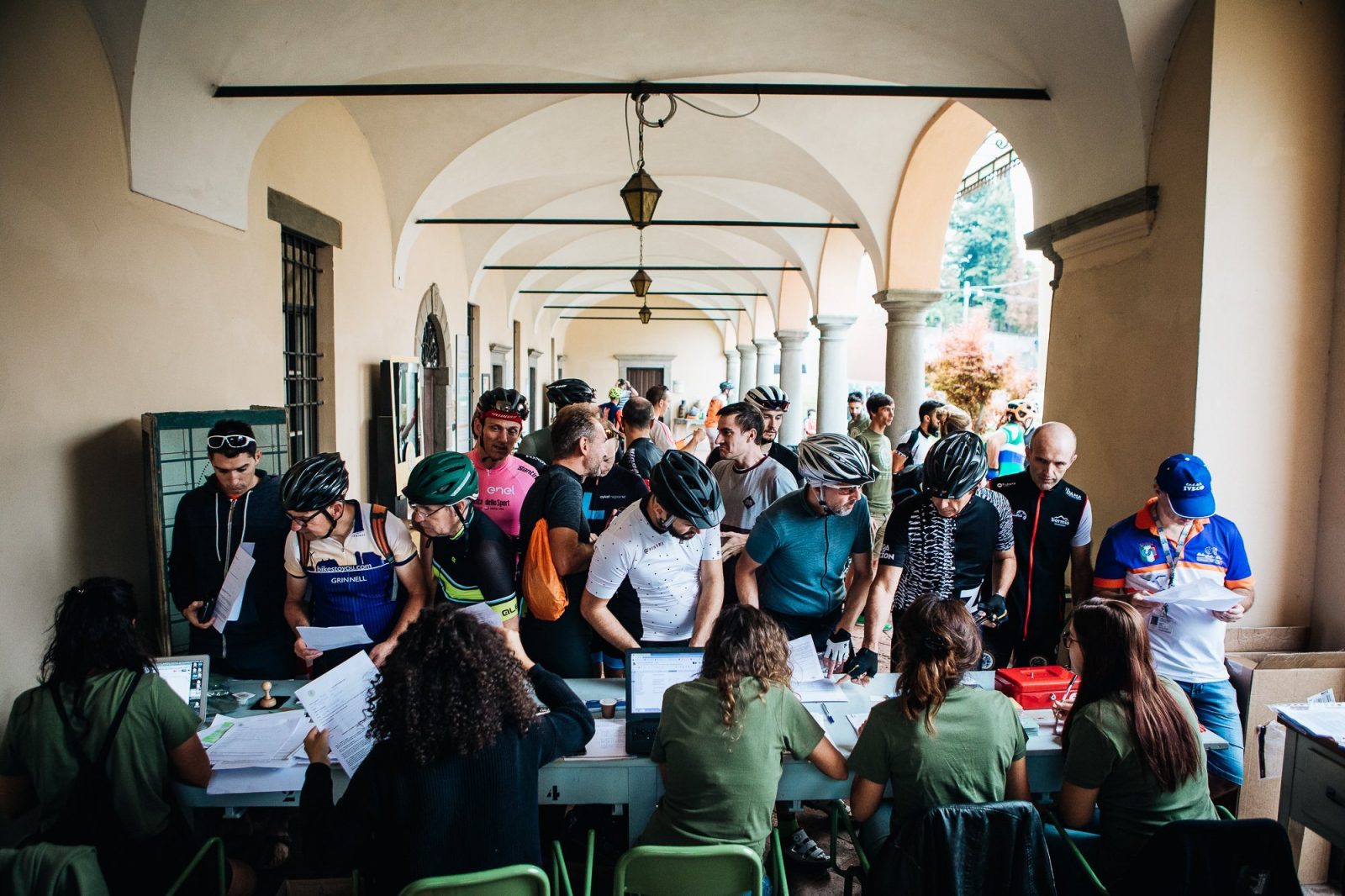 A lot of old friends and many new ones were there at the event, in their tents, the expo village, or participating in the ride. The Jeroboam is a bike festival, not a race, so there is no tension among people and everyone was relaxed (except for Mario Bramati, the Jeroboam mechanic, who had to deal with any last minute mechanical tweaks for all the participants. Thank you Mario!). I love that kind of atmosphere! 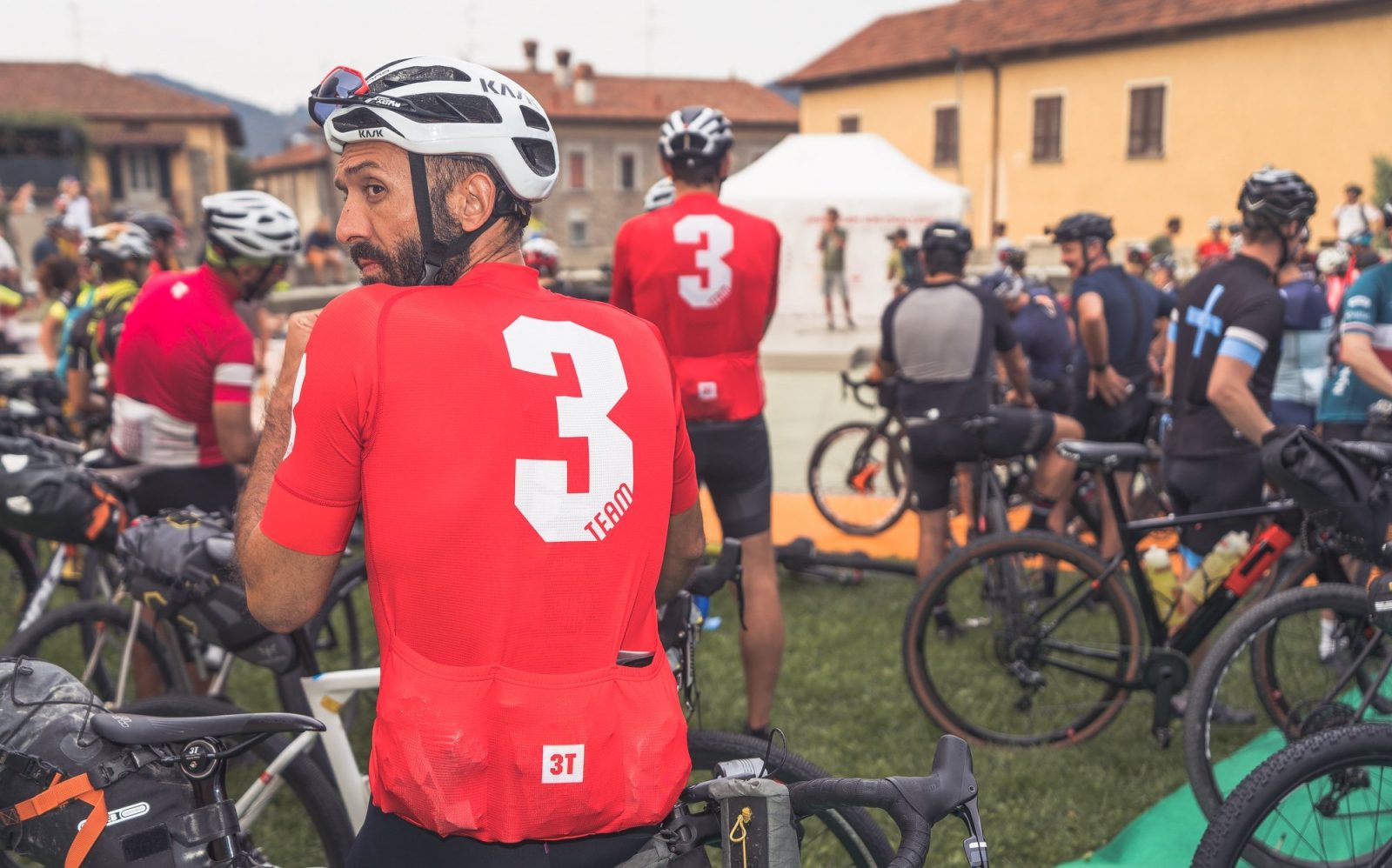 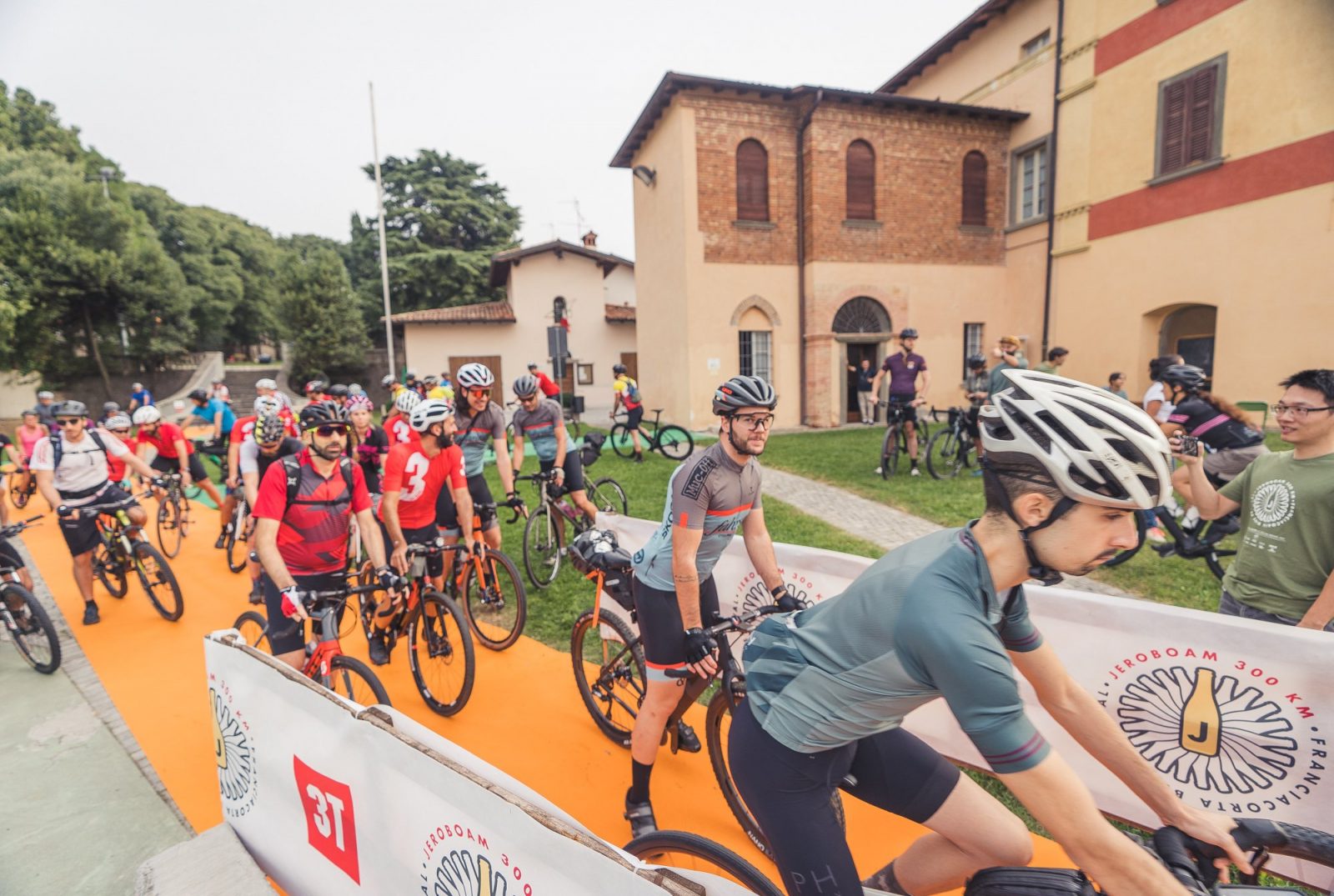 After some final adjustments on the @missgrape backpacking bags on my Exploro, it was time to go. The first, relatively easy, 50km of gravel took us through part of the beautiful Franciacorta region and up in the amazing Trompia valley. The path is not difficult, but we stopped 3 or 4 times to help people to fix their bikes. The first climb is short but steep; we arrived at Lodrino and went down to the first nutrition point, in Parco delle Fucine, where Davide and Jens took care of feeding us before we left again to start the hardest part of the ride. 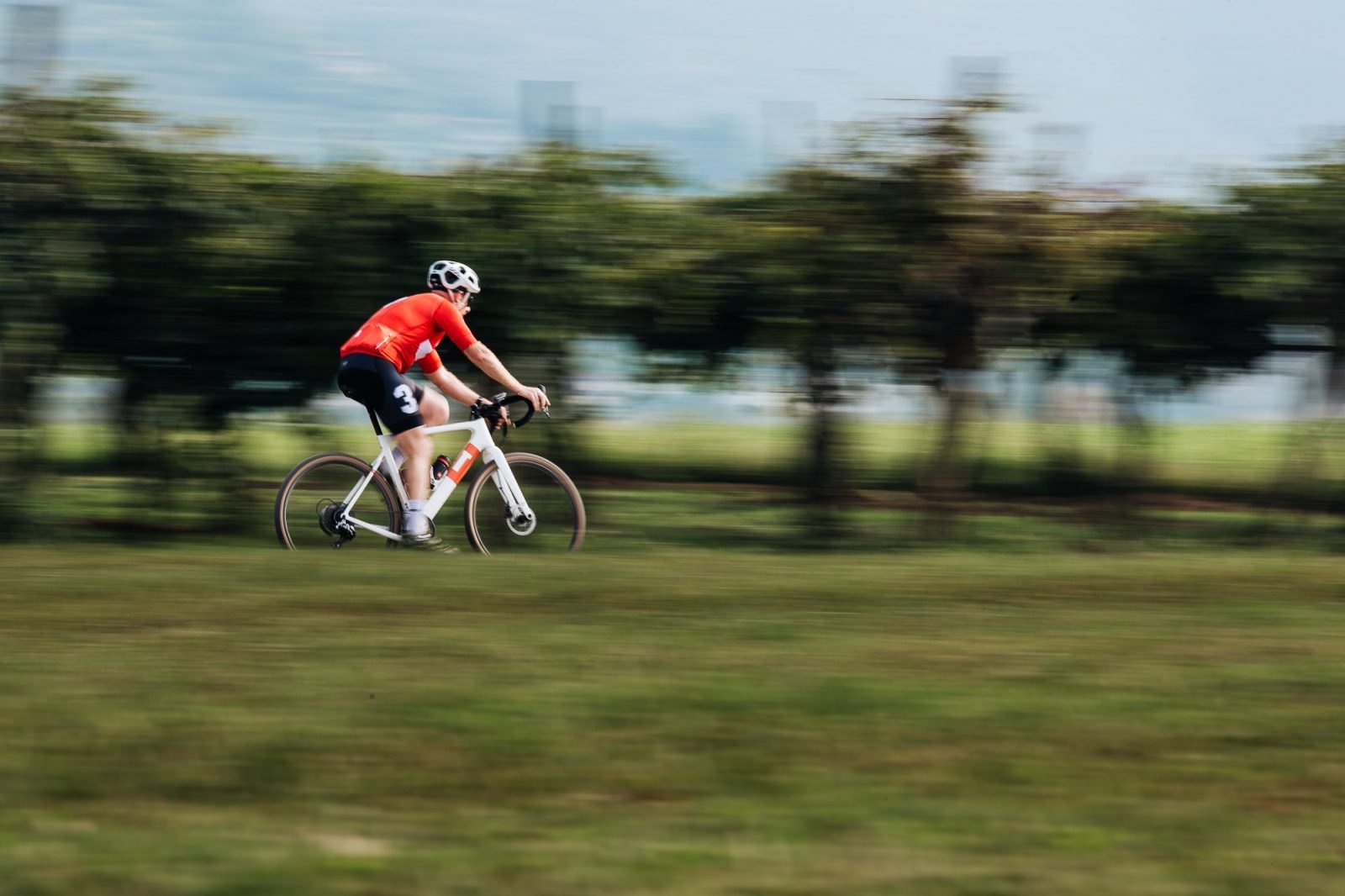 For the next 25km our main enemy was gravity: 1.200m climbing done in one big exertion. At some point we found ourselves pushing the bikes as the slopes were too steep (for us), but it was worth it! Some of the most beautiful scenery was waiting for us and we still regret not stopping more often to take pictures of the incredible nature in the Brescia Pre-alps. 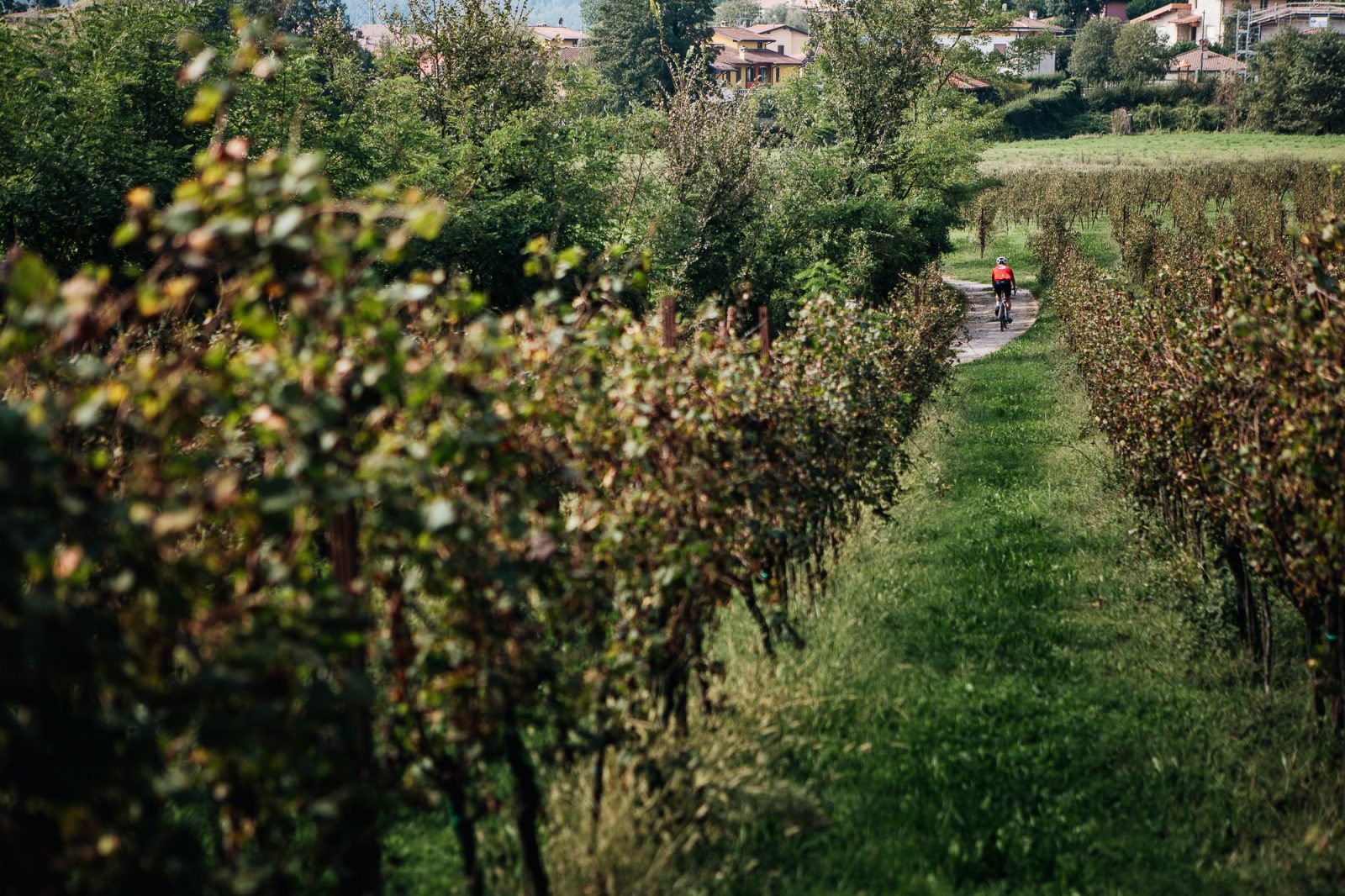 We then saw some bikes leaning in front of a coffee bar – perfect timing for a fresh drink and some food!

Here we met Ausilia and Sebastiano, a couple who enjoys to cross Alaska in their free time (a.k.a. the Iditarod), and Paolo, a self-supported riding addict. We joined forces and kept riding together until nighttime.

The road continuously pointed upwards, and the view became more astonishing at every turn. The panorama that opens at Pian del Bene is breathtaking, and after few hundred meters of portage we made it to the highest peak in the Jeroboam ride, Pezzeda Pass, at 1.650 m. The air was clean and chilly up there, and my lungs were going up and down fast. All I needed was my bike and a handful of friends to share this moment. 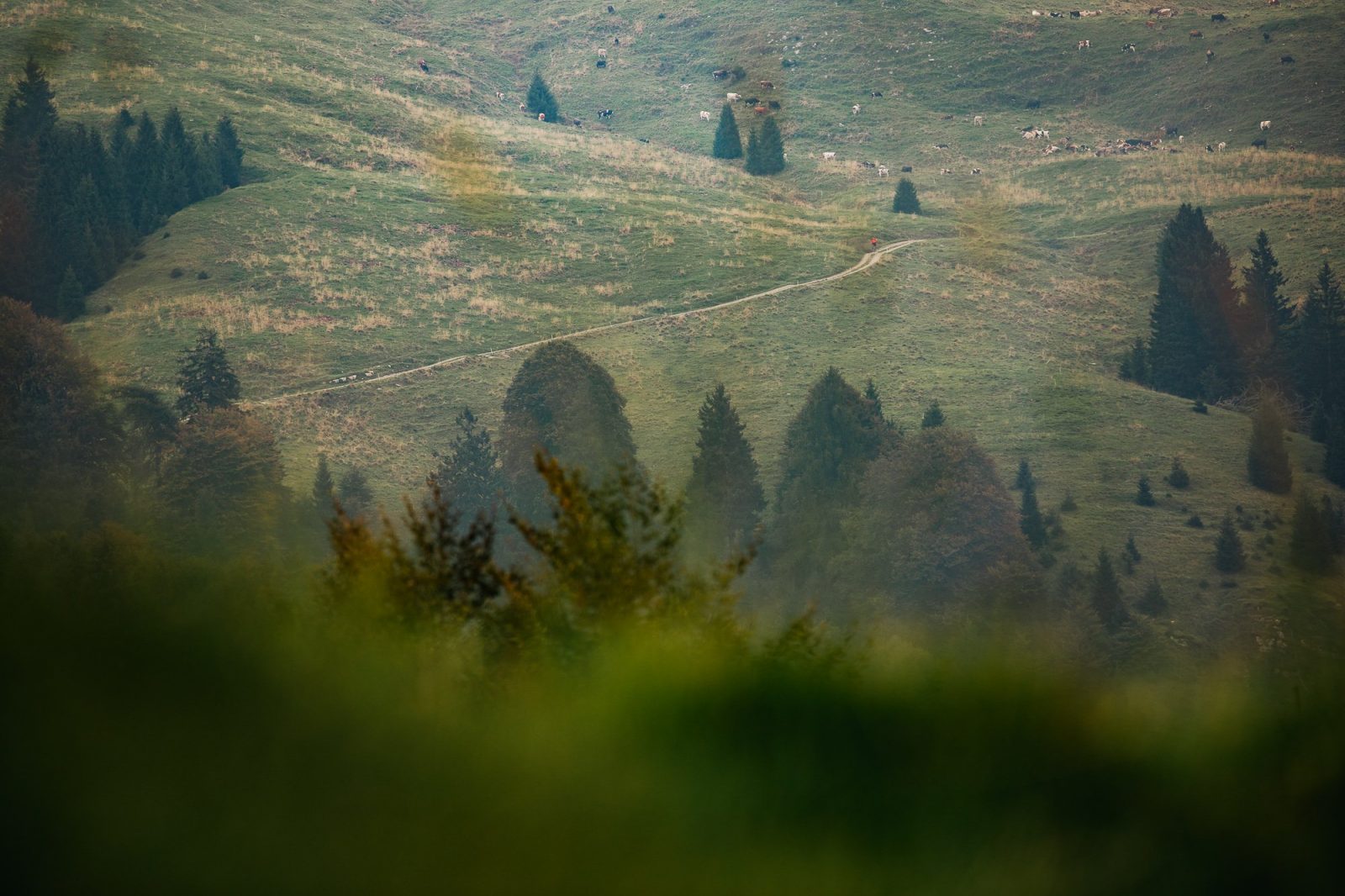 As the descent began, we realised that it was not going to be relaxing. The heavy rains from the past few days had turned the normally hard-packed gravel road into a steep mess of loose rocks. This was our battlefield for the next 10km. Although I focused all my thinking on making it down alive, I remember being surprised at how well my bike worked in this situation. 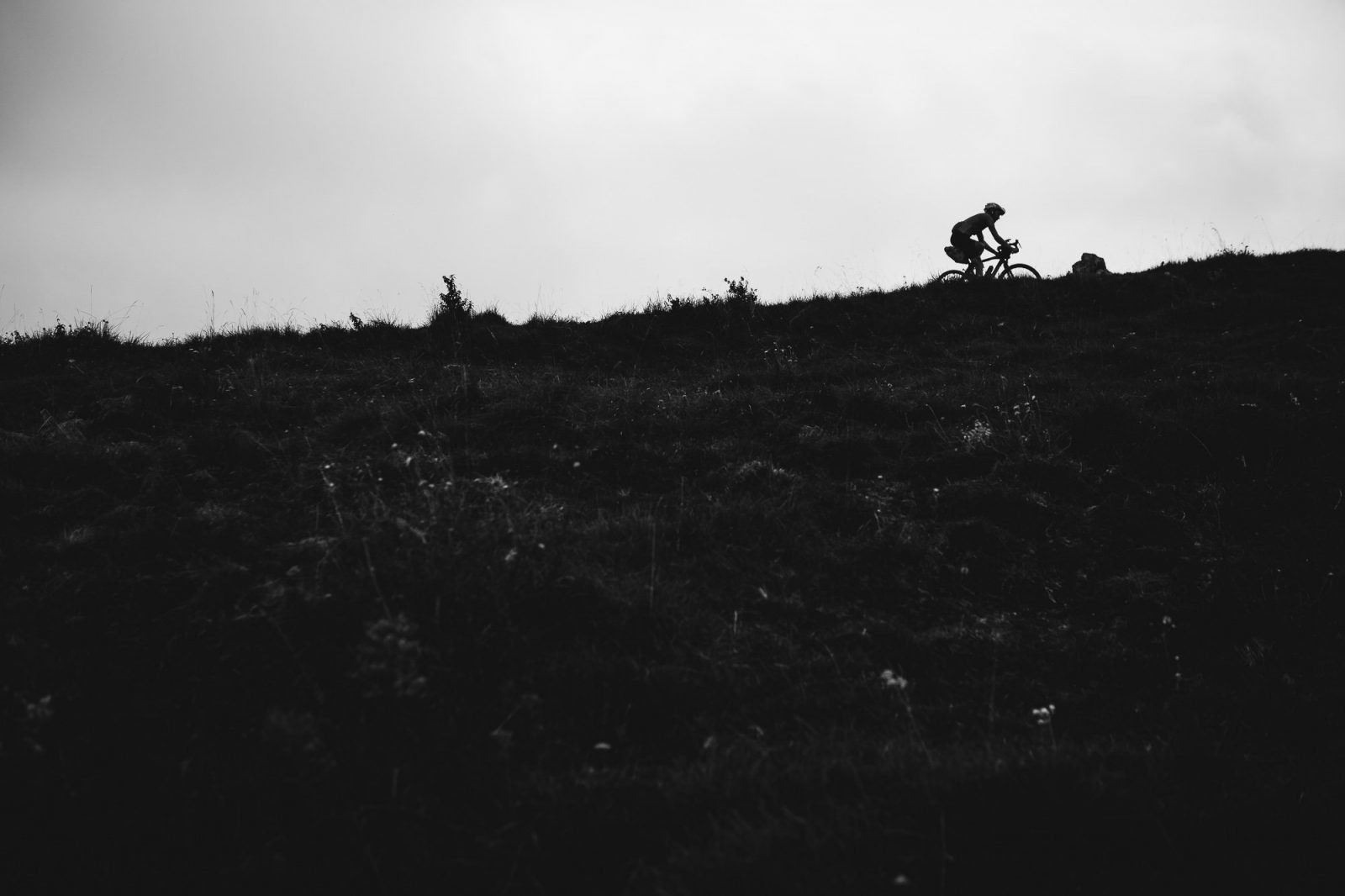 Some might argue that this is not gravel and that they would have needed a MTB. Well, they would be correct, but I was able to manage well on my gravel bike, which allowed me to go much faster than a MTB when the ground turned into gravel or asphalt later on. This is true all road, handling all sorts of terrain with the most amount of fun.

The downhill took its time and we made it to the second nutrition point, the rifugio Amici Miei, right in time for dinner. A few hours with our legs under the table and an almost continuous flow of spaghetti from the kitchen to our plates absolutely restored our mood and glycogen levels at the same time. 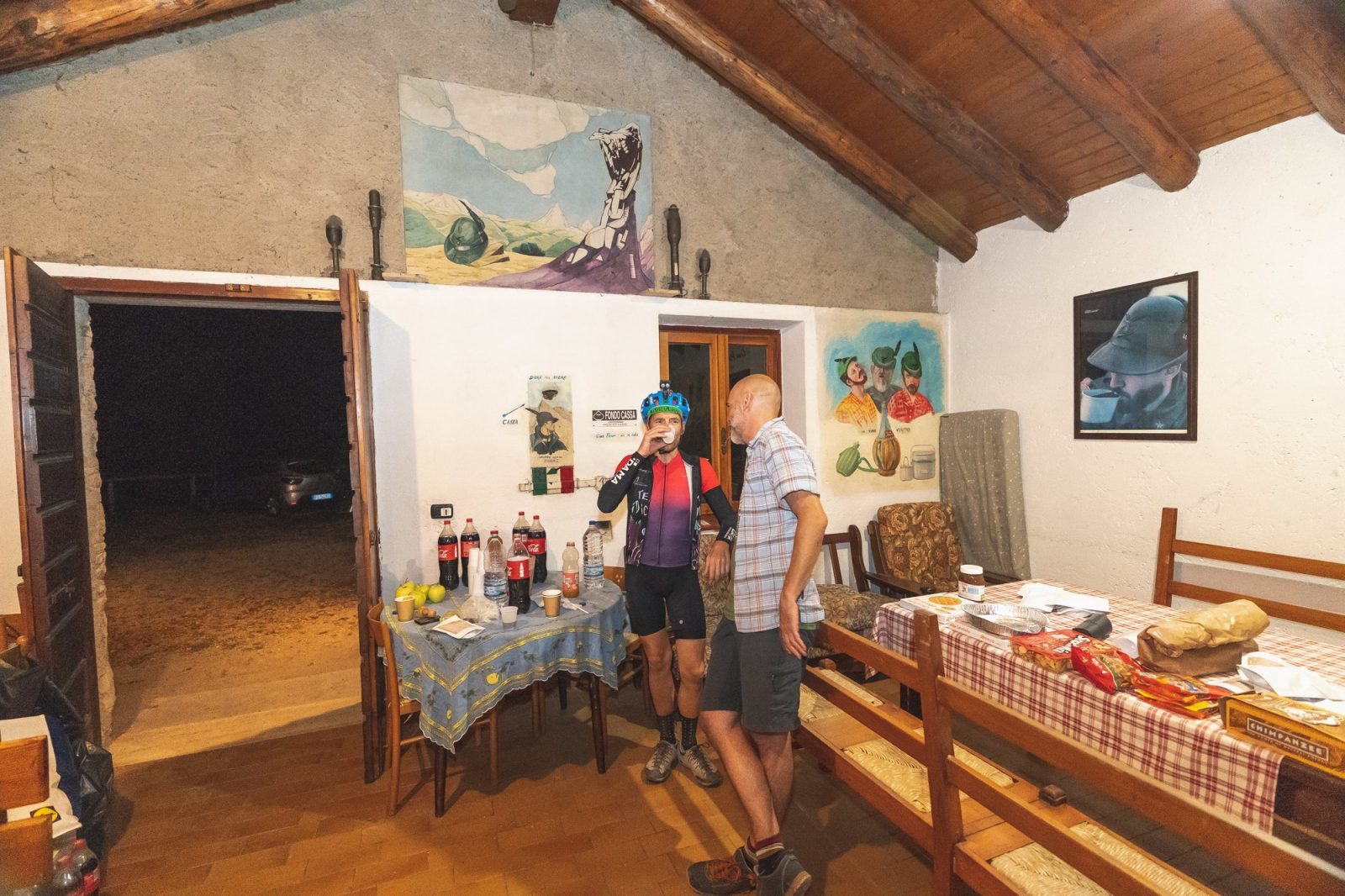 Night had arrived, but we kept going. The beams of our flashlights cut the darkness. It was quiet around us, nobody talking. We climbed surrounded by the magic skyline of the mountains in the moonlight. The towns we crossed were sleeping, except for Presegno! The citizens of this tiny group of houses were celebrating out in the square and invited us to stop and get a piece of cake and a glass of local red wine. I live for this kind of experience, and people up there are lovely! Italy is a melting pot of a billion different cultures and traditions but you won´t get better hospitality (and wine) anywhere else, I guarantee it. 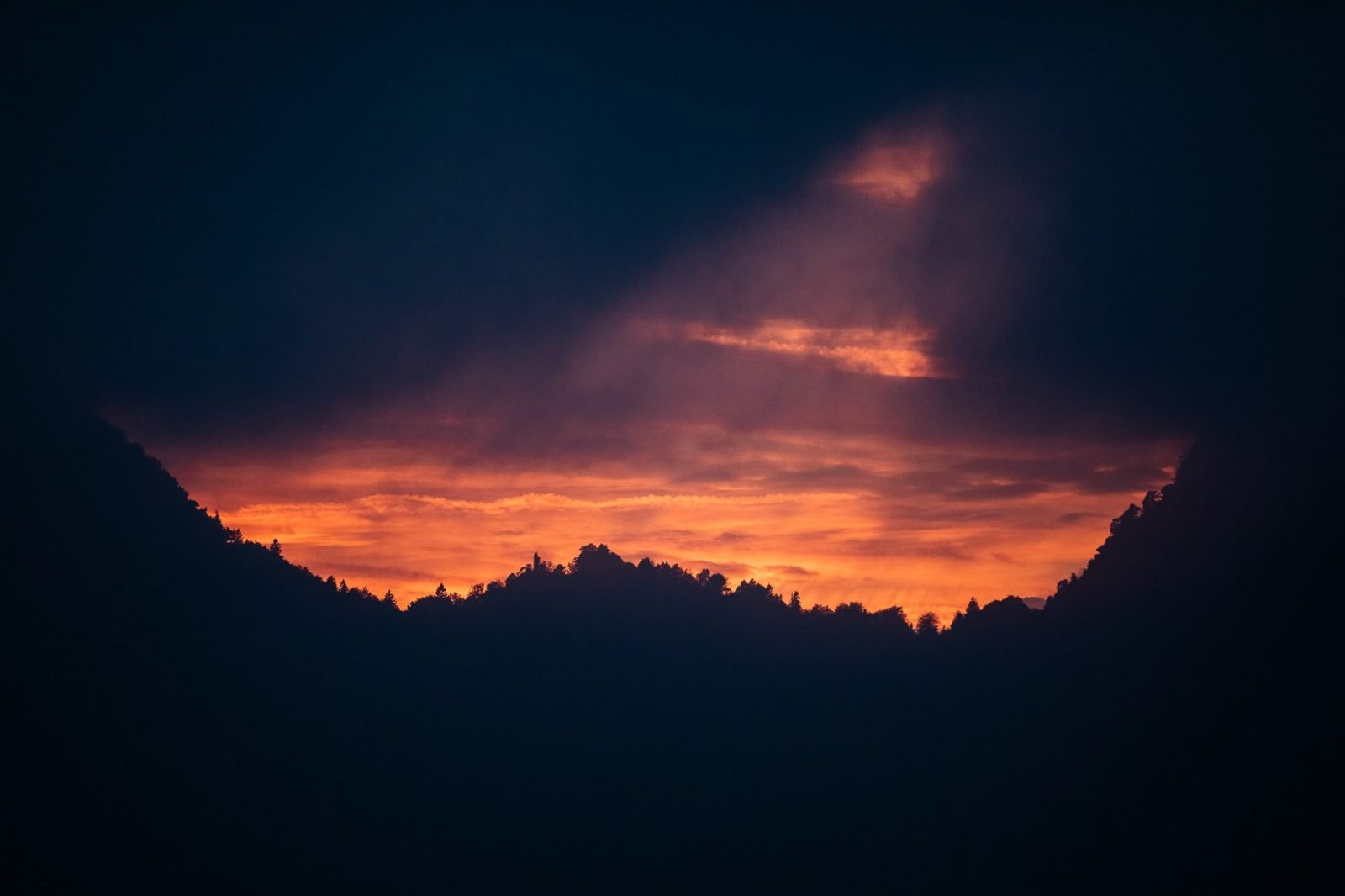 At 3 AM we arrived in Capovalle town, where we shared the only bar open at that hour with some passionate karaoke singers. Carlo and I were tired, and together with Giorgio and Pier (who joined the group after the refuge), we found a shelter and snuggled into our sleeping bags until the sunrise. We wouldn’t realise till the morning that we shared the roof with a happy family of huge spiders who luckily didn’t mind our company. 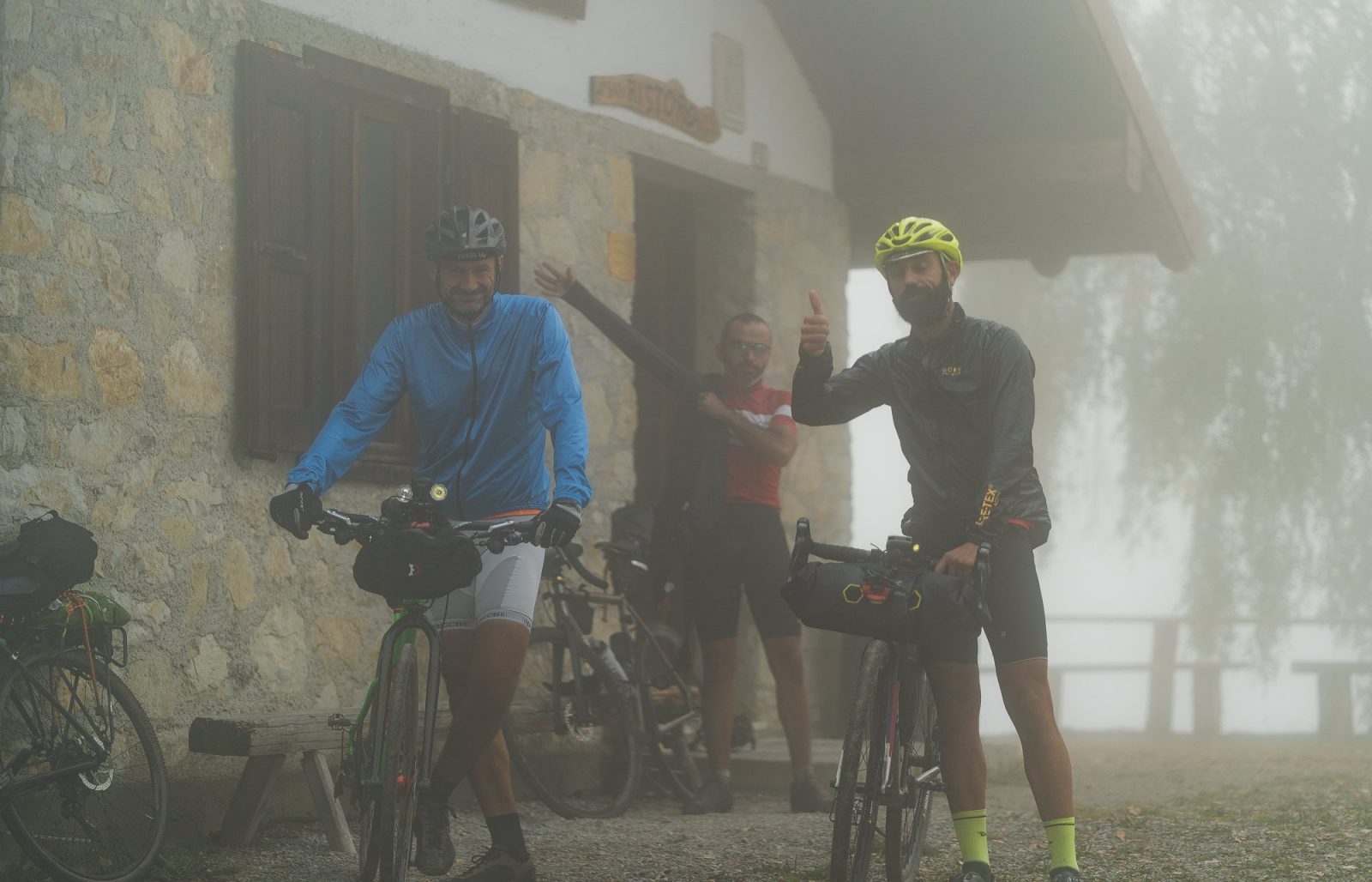 Awakened by the first donkey braying (no roosters for us in Capovalle, just a donkey yelling at us like he wanted us to get up and ride), we were immersed in a thick morning fog. Our sleeping bags were wet, as well as the clothing we had left hanging on the bikes. We packed everything and in no time the squad was ready for cappuccino hunting. Not too long after the start, our craving was satisfied by the only open bar we’d see in the next 40km (yes, you can ride for 40km in Italy without coming across a single bar!).

The second part of the course was less harsh although we had to push our bikes now and then. Two more peaks at 1.350m stood between us and the next nutrition point. Going up, though, was not bad in the fresh morning air. As soon as we passed the clouds, a warm sun started to dry our bones from the humidity of the night before. For the whole tract we never left the fairy-tale-like woods, spaced out just by cabins and mountain meadows. It is amazing how the beauty of intact nature can be so close to the urban areas.

On top of the first peak, Piergiorgio found two prosciutto sandwiches that he shared…needless to say, it was the best sandwich of my entire life! The mood was good and at noon we were at the Rifugio Dosso Piemp, where Andrea was waiting for us with a big smile and some good and healthy food which lived its moment of glory until the veteran Alpine soldier ruling the Rifugio proposed a plate of tagliatelle with wild boar meat sauce.

More than 10km of descent gave us the chance to admire the magnificent panorama of Lake Garda below. We could feel that the worst part was behind us but we still had 120km to go! It didn´t matter, we were fast now (the few km of asphalt was welcome!), our legs could spin quickly and after some time we reached the rest of the group that had ridden all night long. 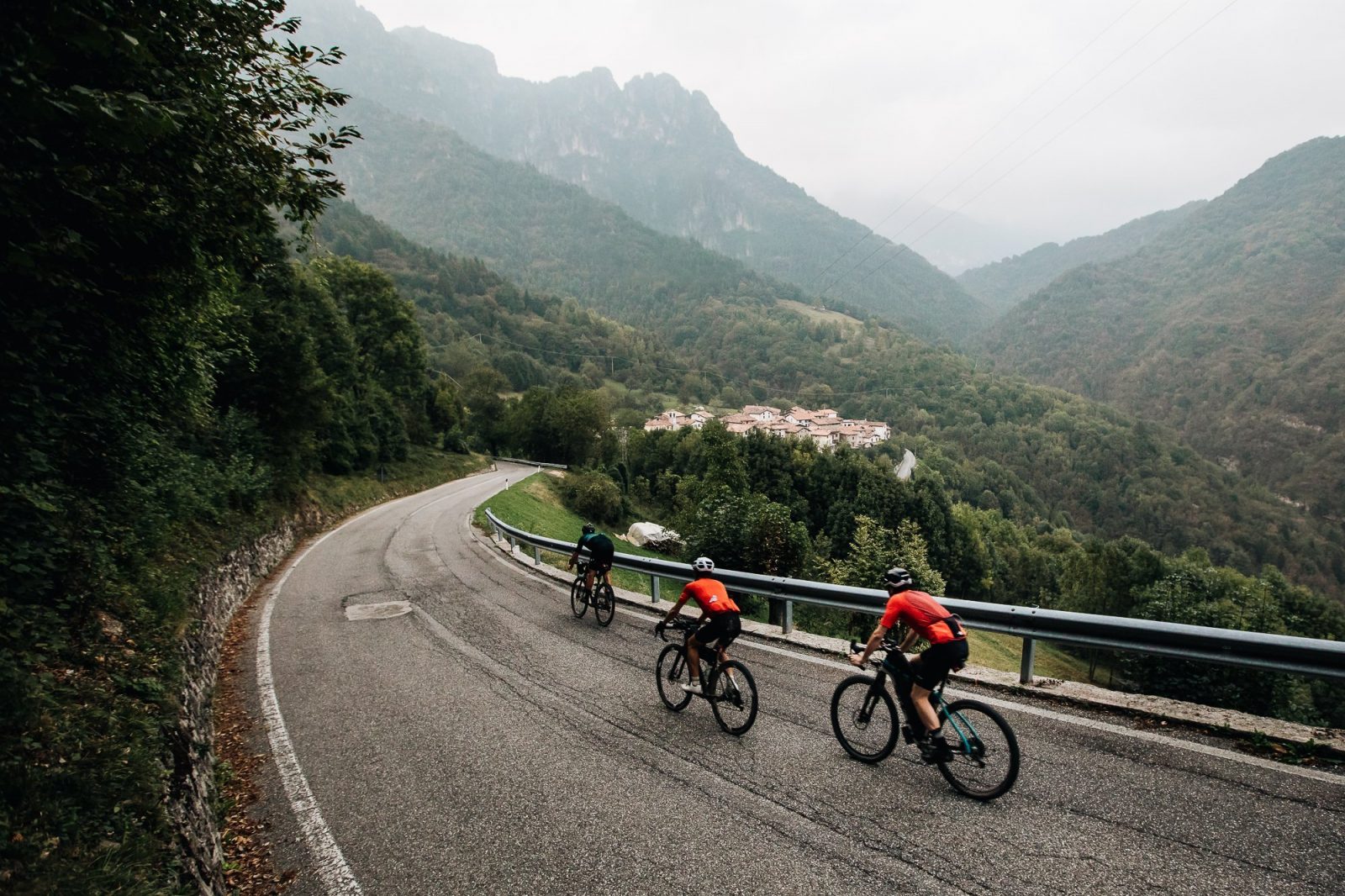 We rode together through Brescia and into the vineyards of Franciacorta. We saw the sun go down for the second time together. Very tired and extremely happy, we reached Erbusco again. Nobody was there except for the hard core members of the Jeroboam organization waiting for the last survivors. We had time for just a few pictures and I was already holding pizza and beer. What a ride guys! 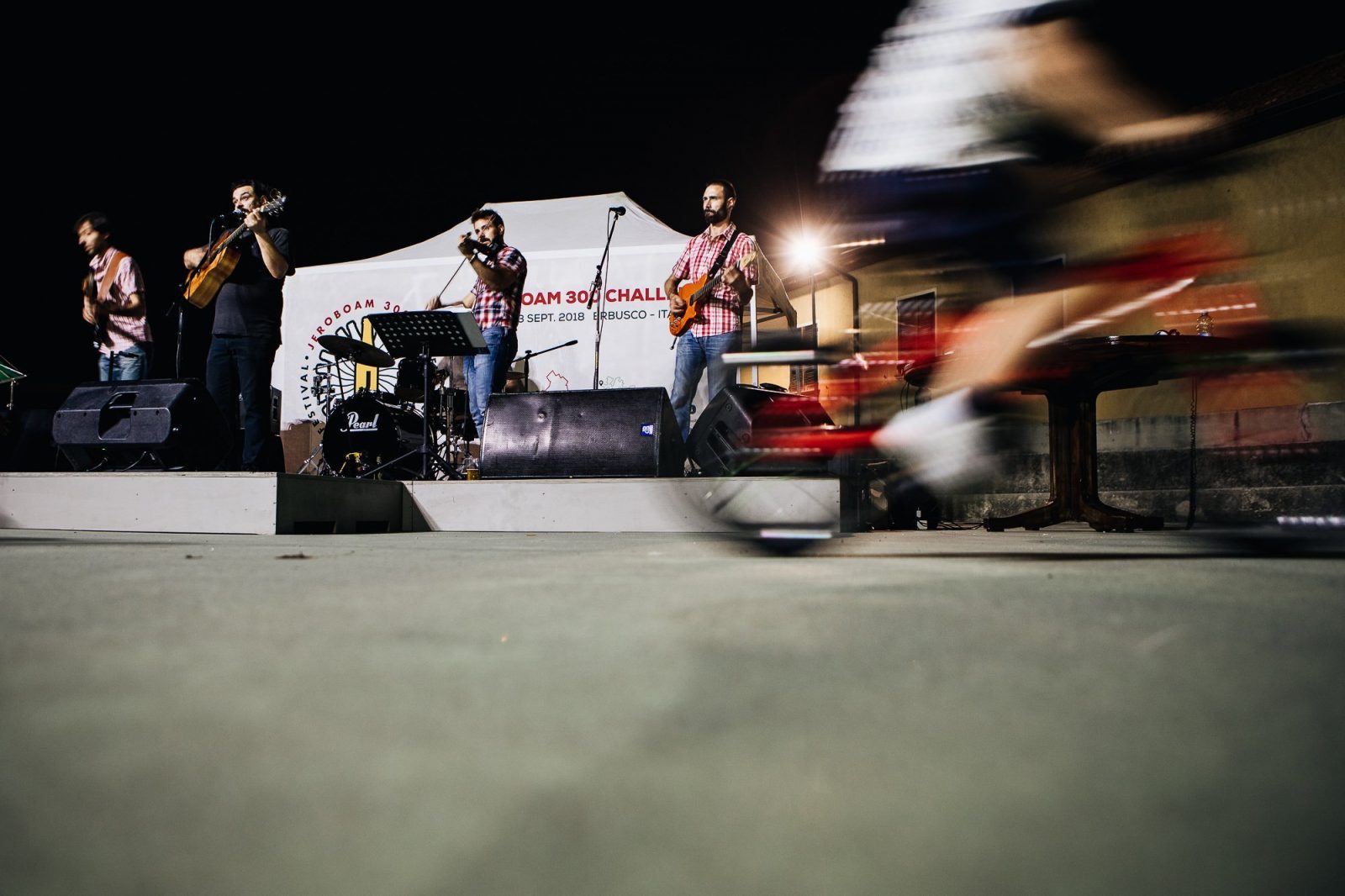 I finished my first Jeroboam 300. It was hard. It was by far the hardest gravel ride I´ve ever done. The mix of kilometers, climbing, and surface conditions was devastating. It is definitely not a ride for everybody, that’s why it´s a challenge! Can you make it?