Goooooaaaaaallll! The small restaurant near Skradin where we are having dinner is exploding with a group of Croatian fans screaming and celebrating the win of their soccer team at the World Cup against Russia. Alcohol is now flowing on the table next to us, and the party had just begun for them. We politely join the party with a beer but it’s time to go back to our Lagoon 450F catamaran, getting ready for tomorrow’s route, the first of our 3 days exploring this beautiful country. 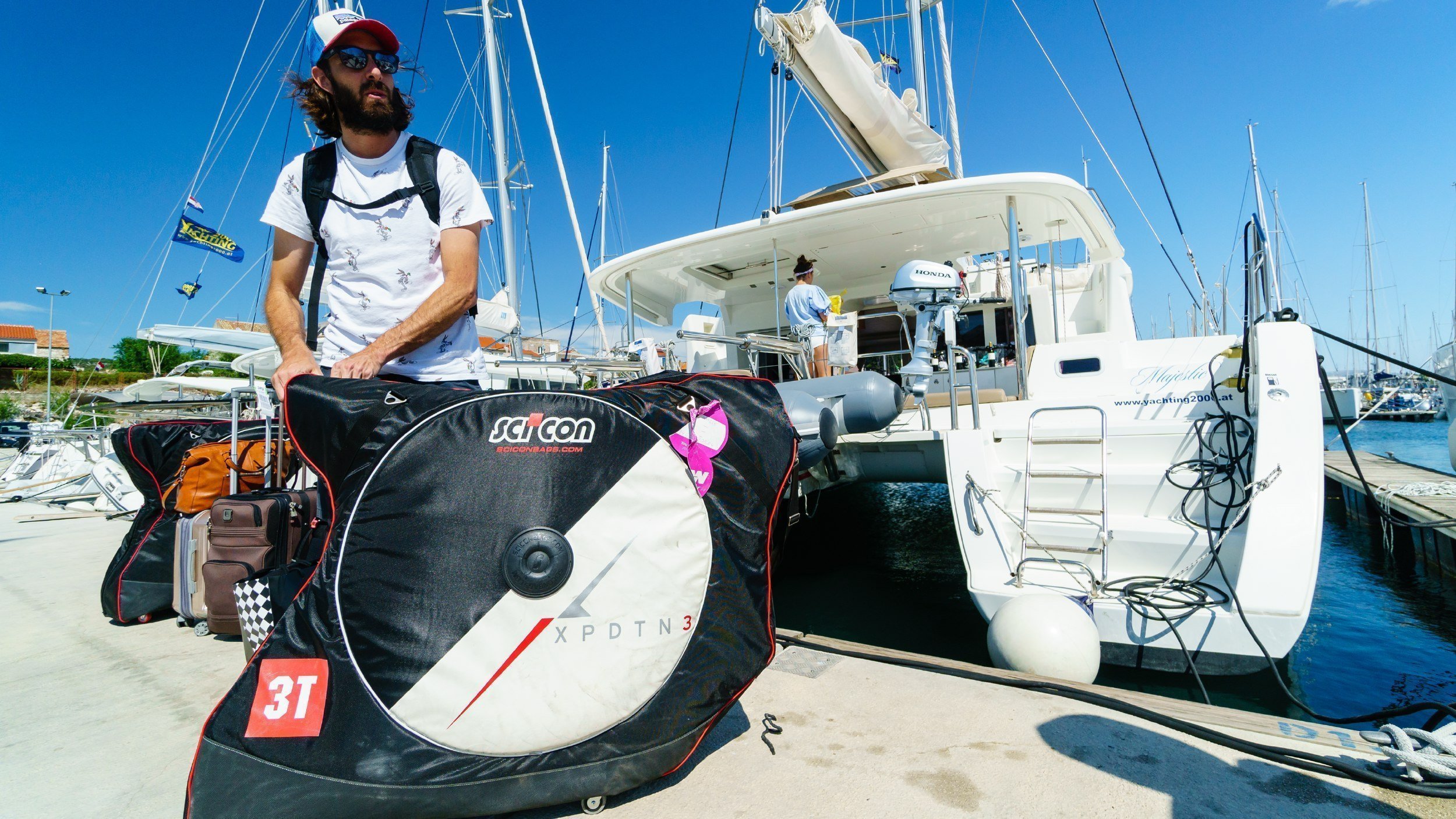 Our XPDTN3 trips are usually self-supported and we travel with our bikepacking packs from one spot to the next one, but this time is going to be different. We are using the boats as a basecamp (same we have done in the past with hotels) and we will explore the trails from there, coming back to sleep floating on the Adriatic Sea. 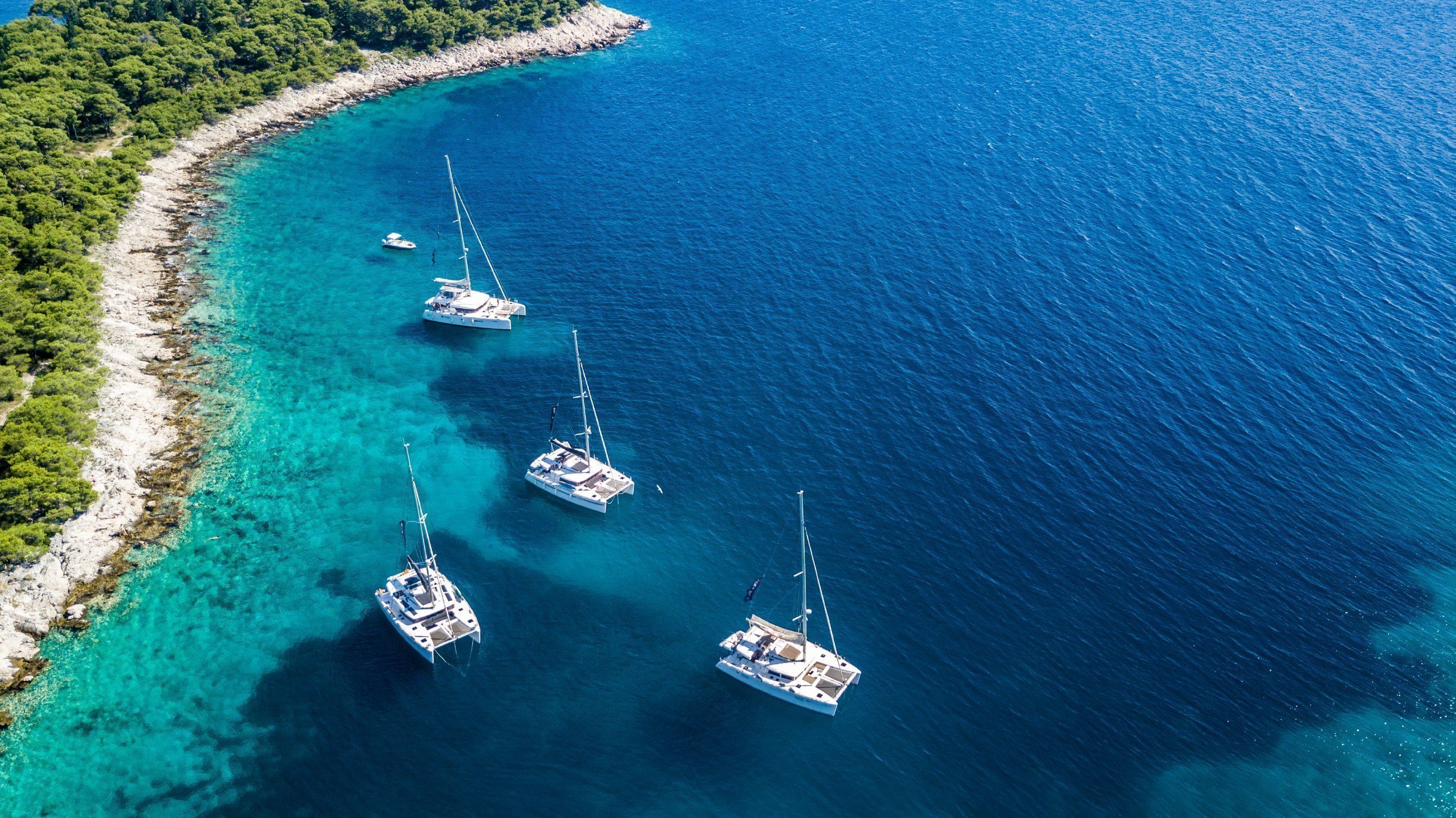 Along with XPDTN3 explorer Marcel Batlle we had arrived that morning to Split via an easy 2-hour flight from Barcelona, and our transfer was waiting to take us to the Sibenik Marina, where the catamaran and the crew were waiting for us. I have done similar trips in the past, like when I did a very cool “Ski & Sail” in the Norwegian Fjords almost a decade ago, so I knew we were up for something cool. 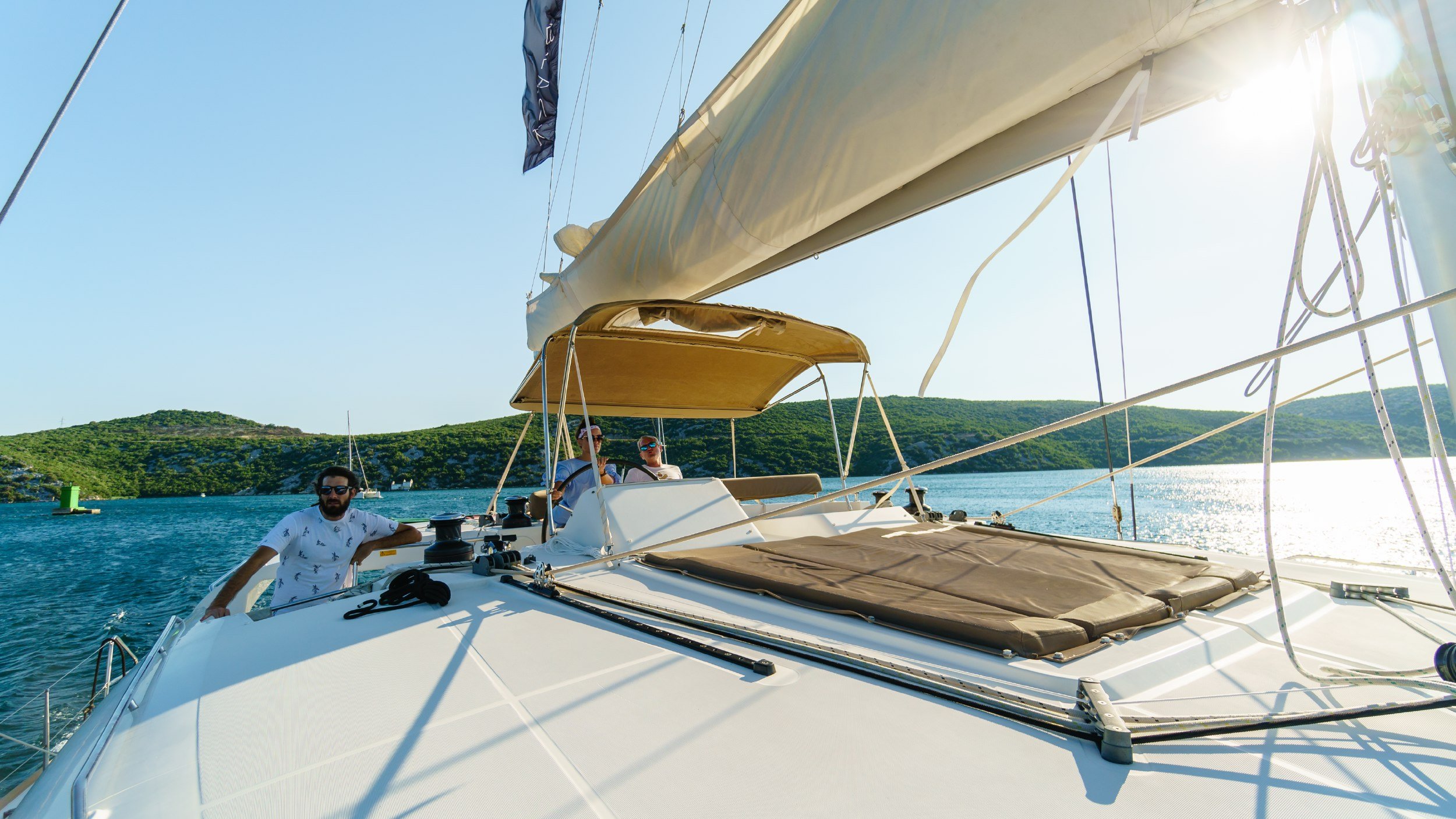 We loaded our Exploros, still in their Scicon bags, on the back of the catamaran, and we got ourselves confortable in the cabin (Hotels wins here, space is limited even in a luxury yacht…) But the idea of living on a boat and shuttling between riding places at your own pace gives you a sense of freedom that adds to the adventure. 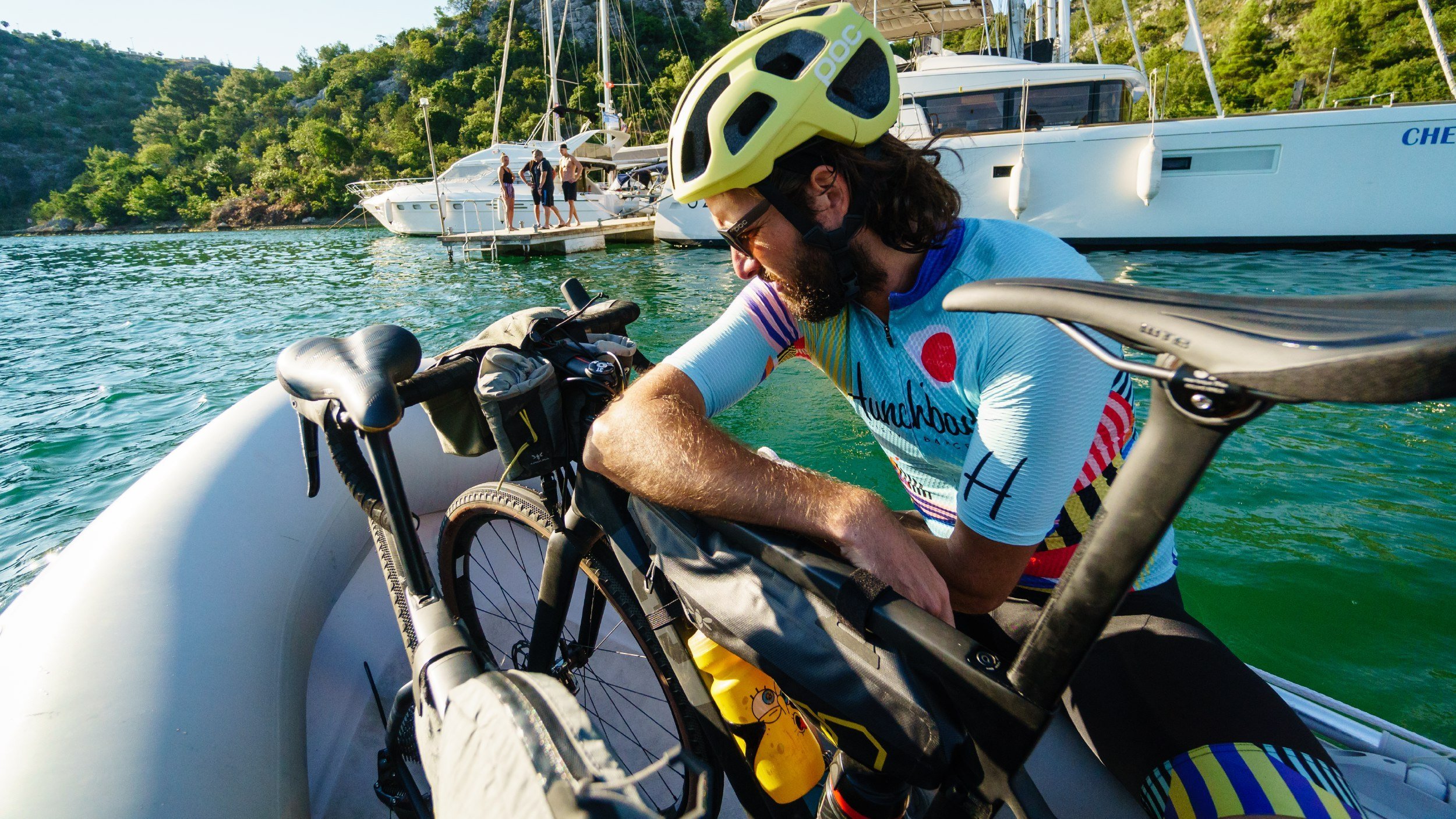 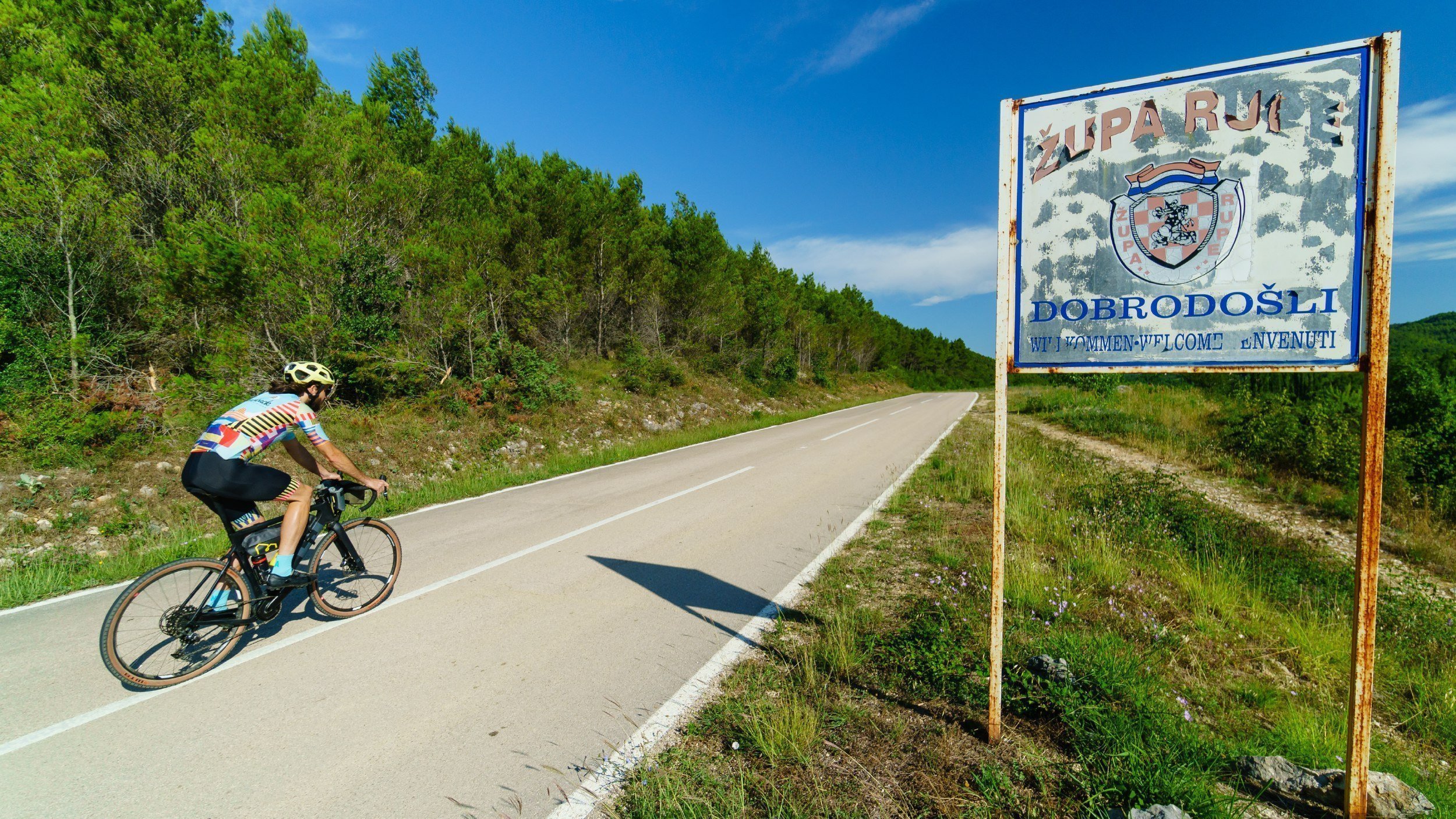 But we were not expecting extra “adventure” on the very first day, when the skipper inform us that the wind is so strong that we need to change plans, so we skip the first stop on the island of Brac for a safer fjord that gets inland into the Krka National Park, where the salty waters merge with the Krka river, and the wind is calm. 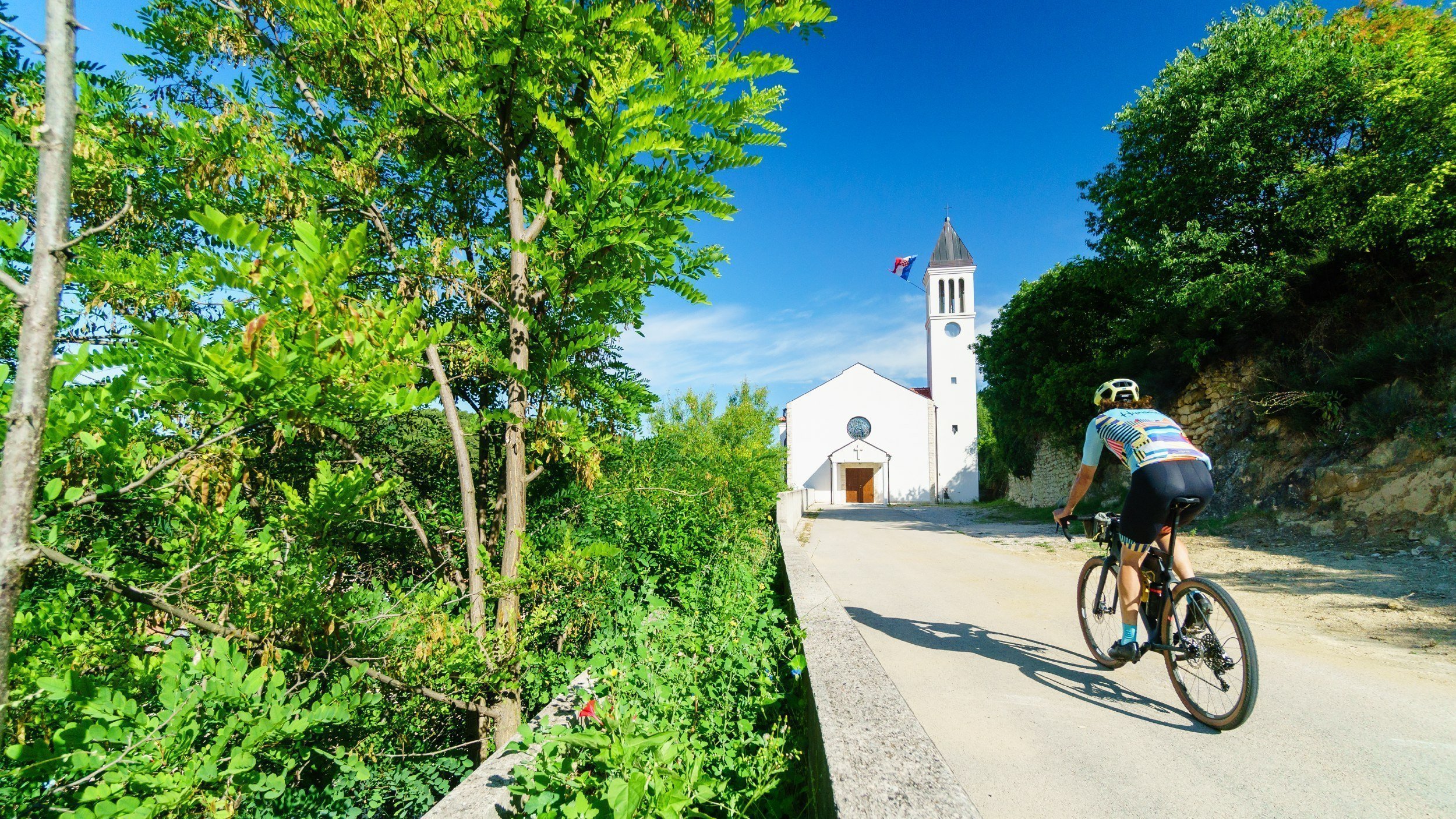 We wake up with a heavy dose of coffee and, what’s best, a quick jump from the catamaran into the cold waters of the fjord. That gets our muscles ready for a cool day out on the bike. Our dinghy, one of those Zodiac mini boats, takes us to Skradin, a famous small port at the entrance of the National Park where apparently Bill Gates spends some of his holidays. We don’t meet Bill this time, but we loaded the route on our Wahoos and get ready to hit the road. 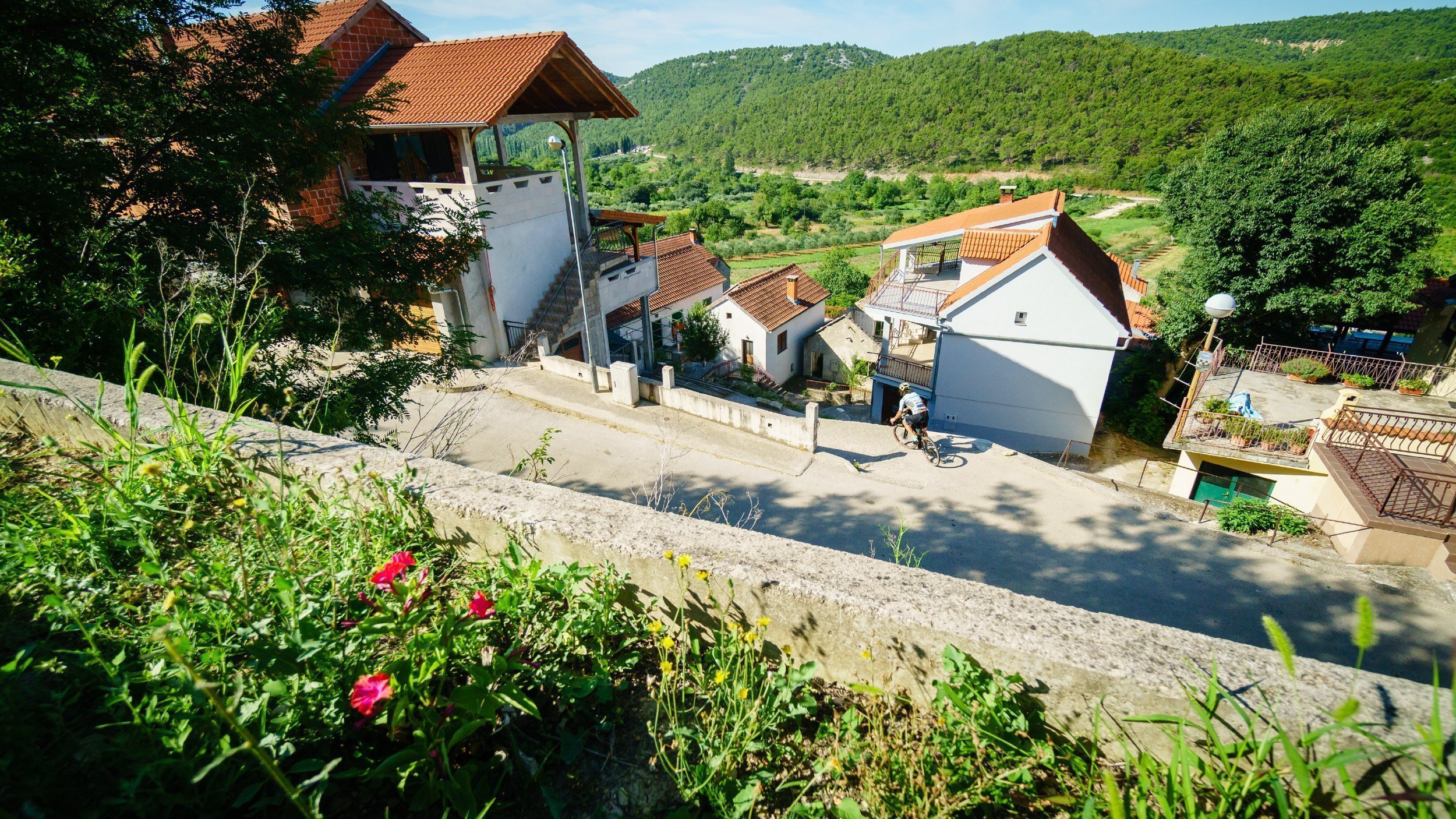 With the changes in plans, we had to improvise on the routes, so we looked for new ones in the area via the Komoot app on our phones. Once we found a cool 50 km route that will take us to the heart of the National Park, we uploaded it to our Wahoo units and we were ready to go. Man, I love paper maps, but technology saved our asses again… 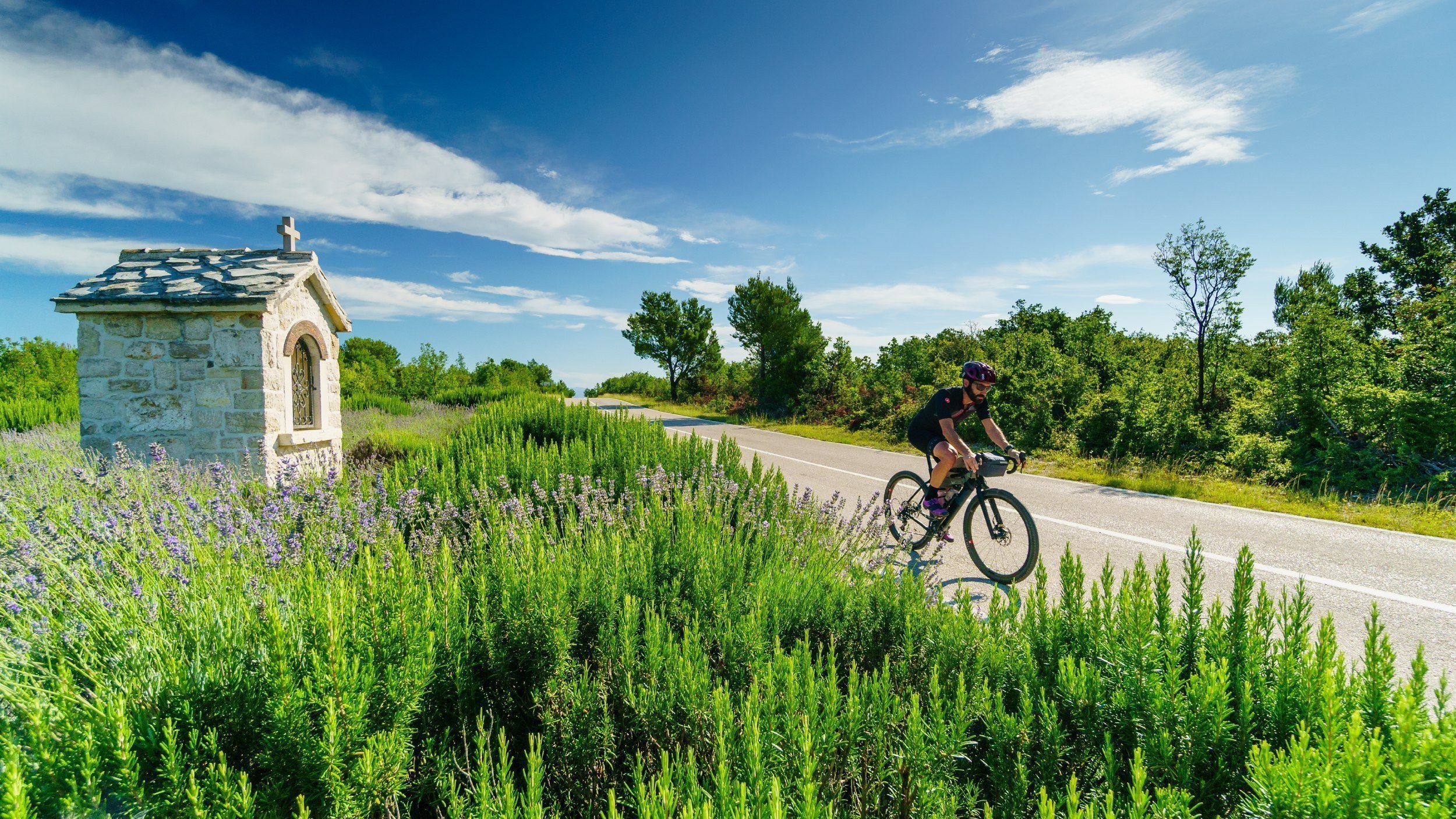 After visiting the Skradinski Buk, a series of gorgeous waterfalls very close to town, our next target are the waterfalls of Roski Slap, a beautiful spot away from the coast, where the Krka river merges with a series of small waterfalls that lead to the biggest main one. 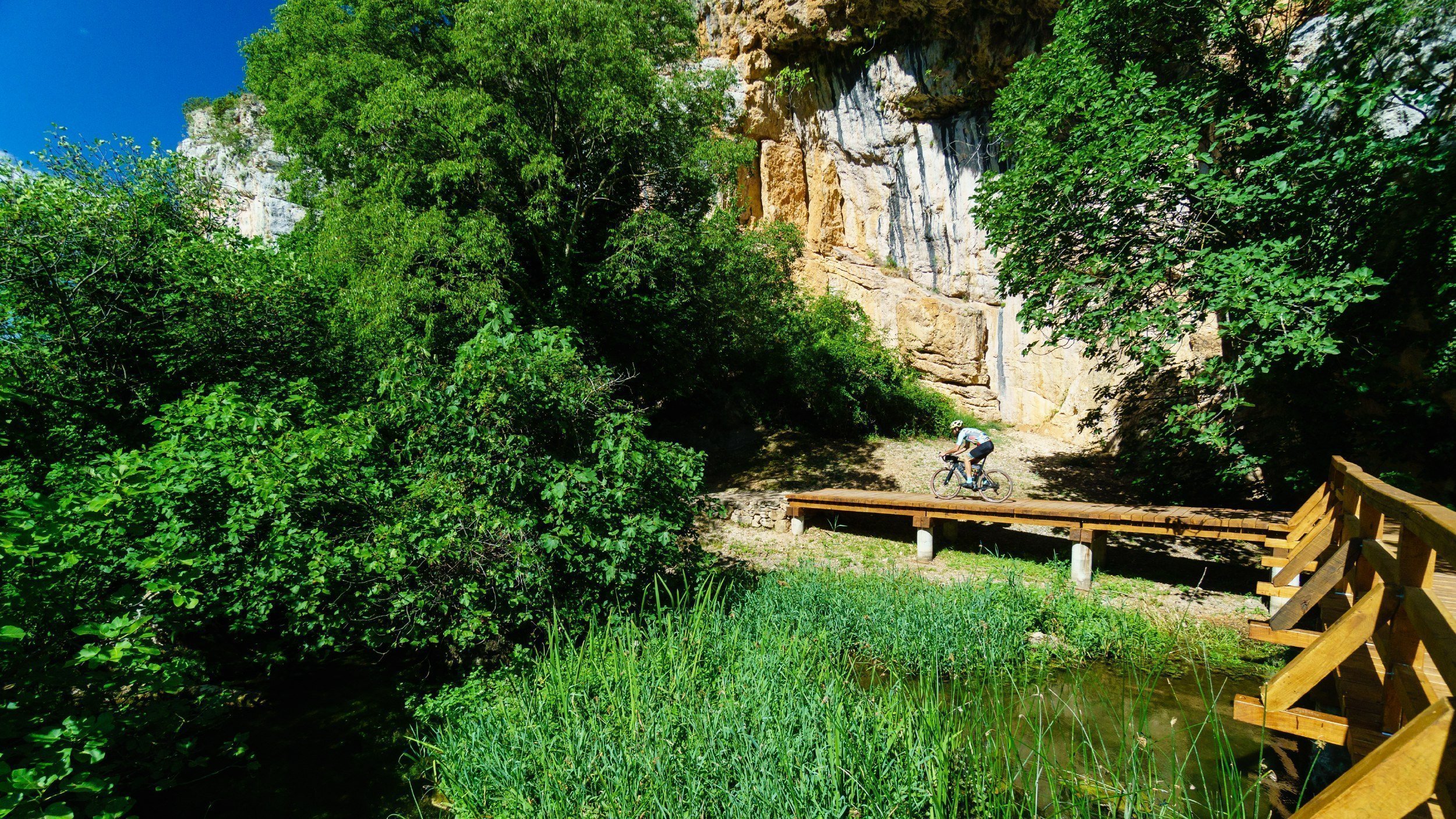 The route starts on asphalt for first half of the trip, so we are happy with our choice of RoadPlus tires this time, and after a fast ride to the town of Rupe, we reach Roski Slap, where we get tickets and the permission to get our bikes on the otherwise hiking-only trail (a smile always goes a long way). 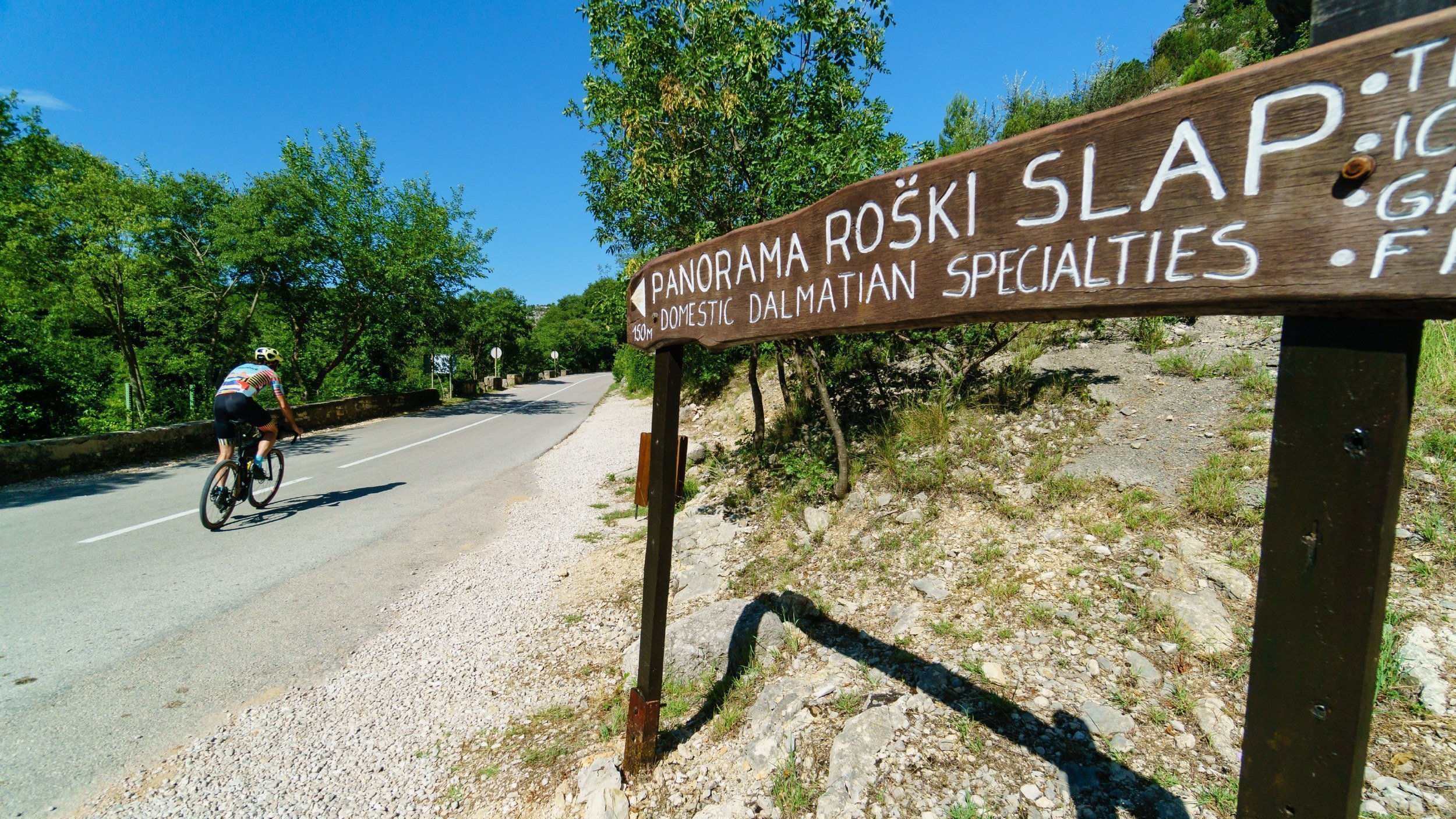 After leaving the core of the National Park we keep climbing on the road, already at 35 degrees Celsius, until we reach a point where the Wahoo started flashing and that means we are reaching the crossroad that will take us to the gravel part of the route. A quick stop to drop some pressure from our Byway tires and we are ready for a quick descent on rocky and technical gravel, passing along the the remains of the old Klucica fortress. 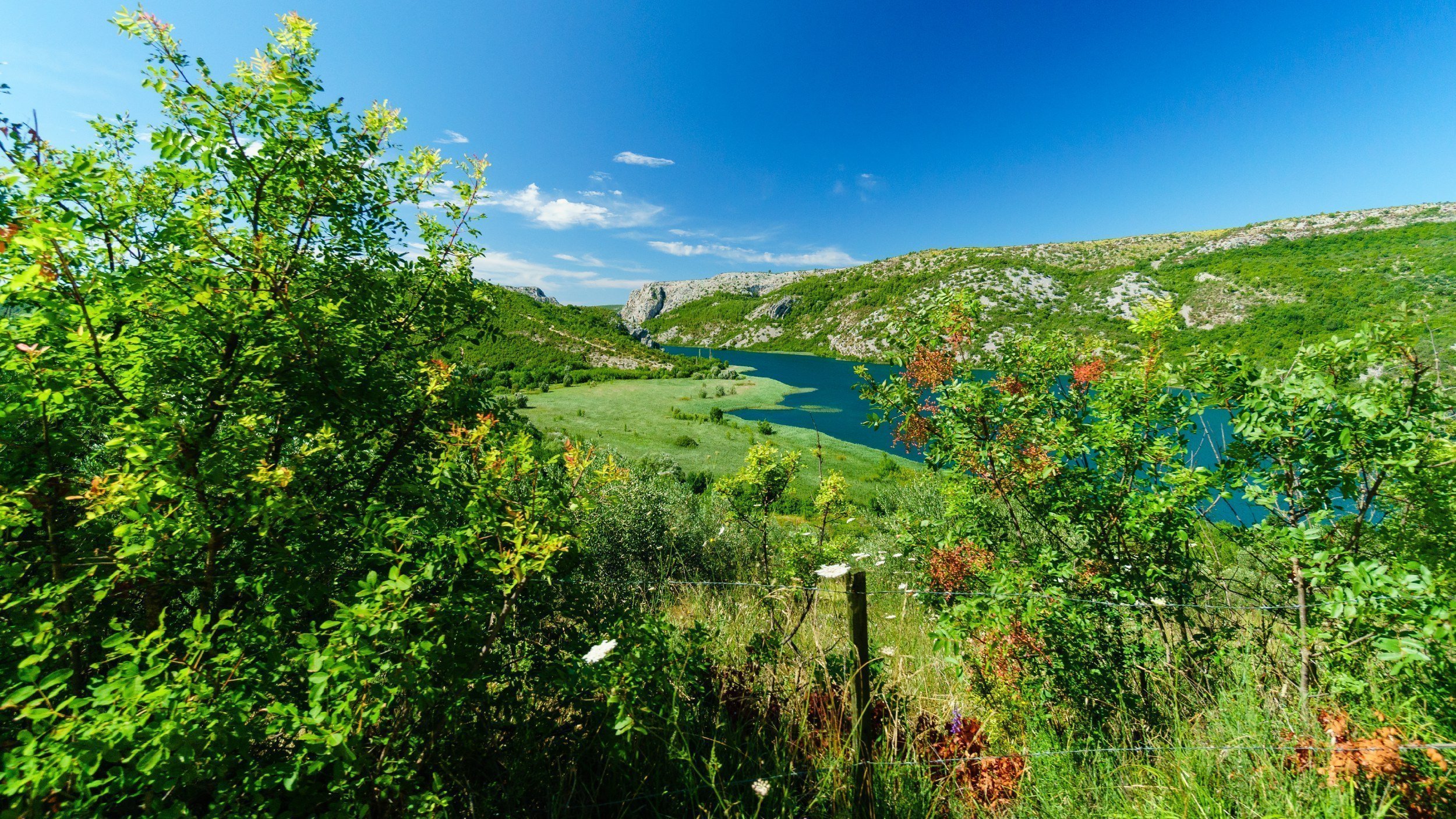 One of the most vertical climbs I have ever done in my life (50%?) welcomes us (bike-pushing) to get to the highest point of the route, where we will join the paved road again and head back to Skradin, to loot the supermarket fridge and get huge amounts of isotonic drinks and “Macho” ice creams. We deserve it. 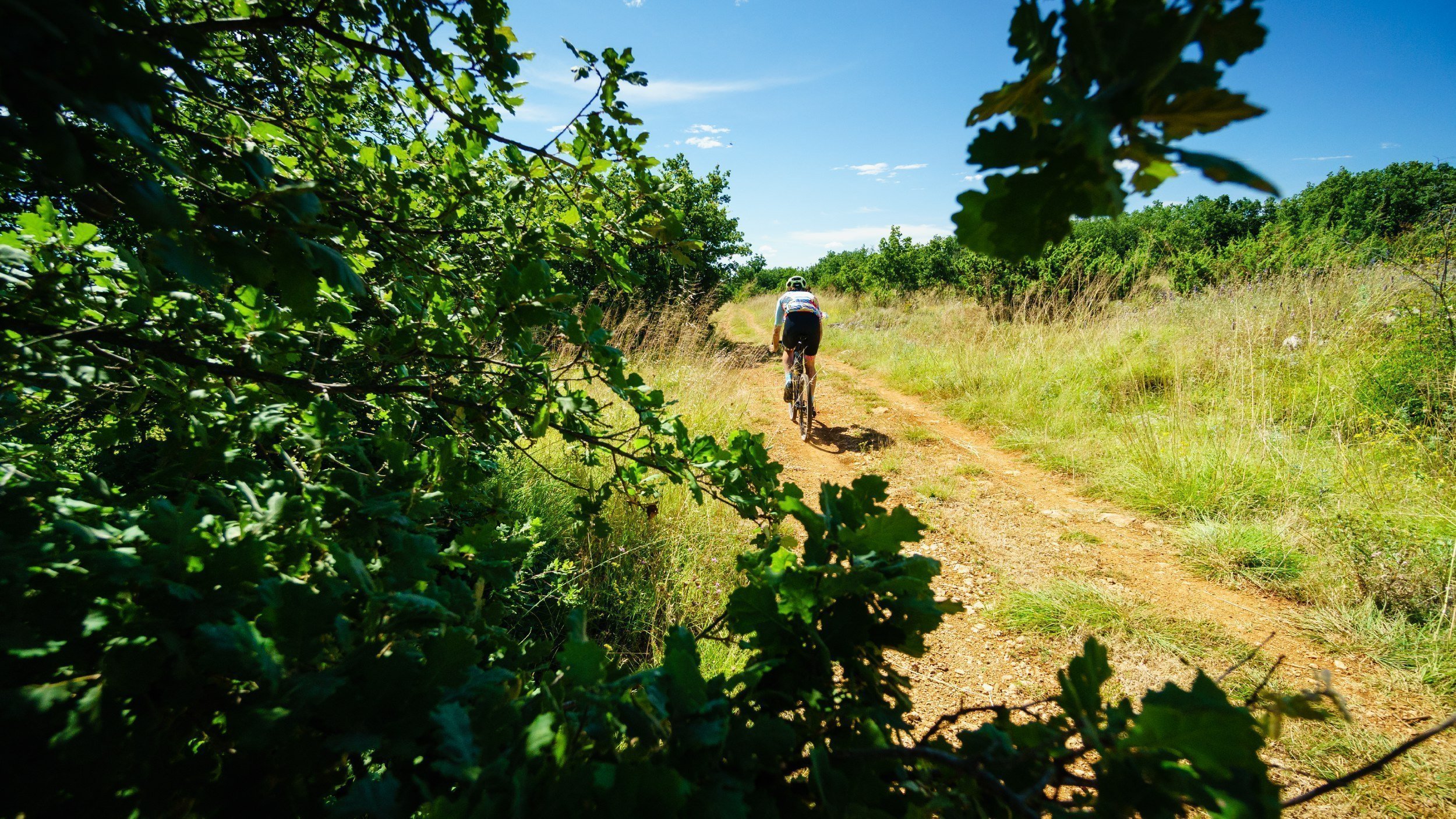 A quick call to the captain and the dinghy brings us back to the boat, after which we sail to the Rogoznica, the port where our cook on the boat prepares an amazing dinner with local fished Tuna and vegetables from the island. #RealFood wins again. 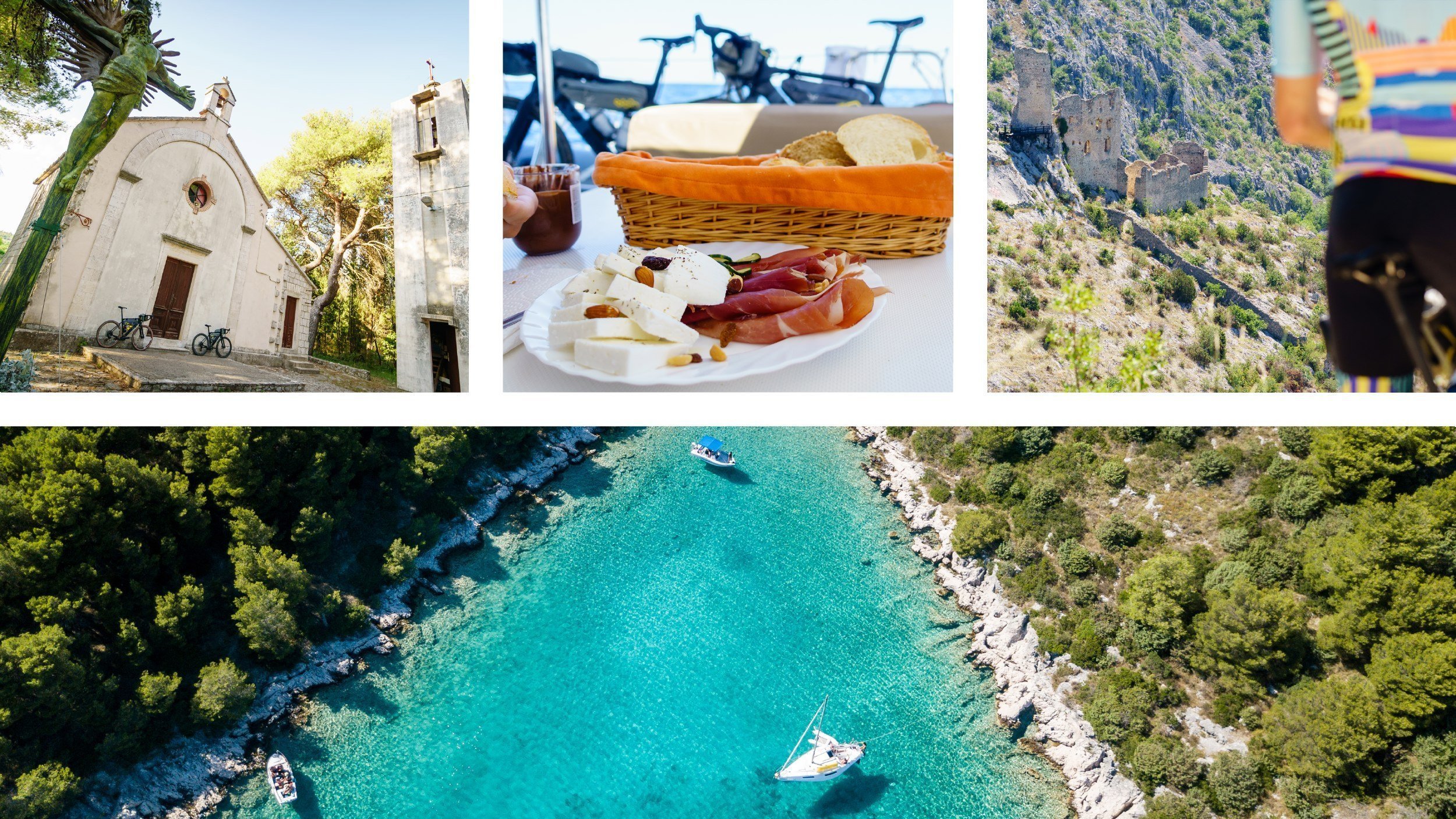 Morning starts again with a quick swim straight from the boats’ bed, which works better than coffee in the morning. After watching an interesting game of local Balote or Bucanje (a Croatian version of the or French “Petanque”) we sail for 4 hours to the Island of Vis, once upon a time the headquarters of Partisan marshal “Tito”. After the WWII, the island returned to Yugoslavia after being occupied by Italians and British, and it was heavily mined. The island was closed to tourism for nearly 50 years and the Yugoslav People’s Army used their now-abandoned military bases. 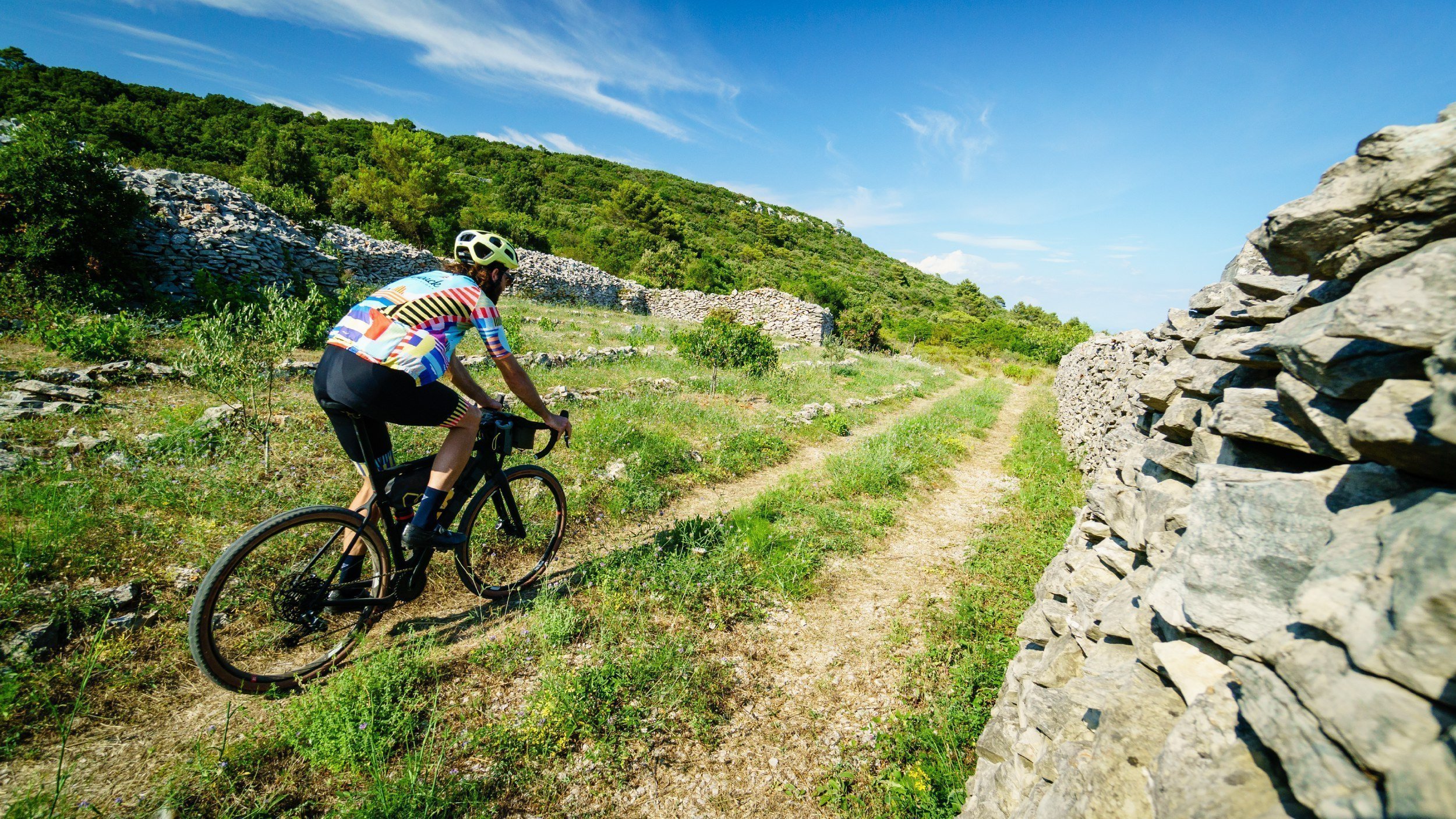 But we are more worried about spiders than mines… After docking on a small rocky beach in front of the famous entrance to the patrol boat pen, where they used to camouflage the ships, we start right away on a steep gravel climb that will take us to the highest point of the island. 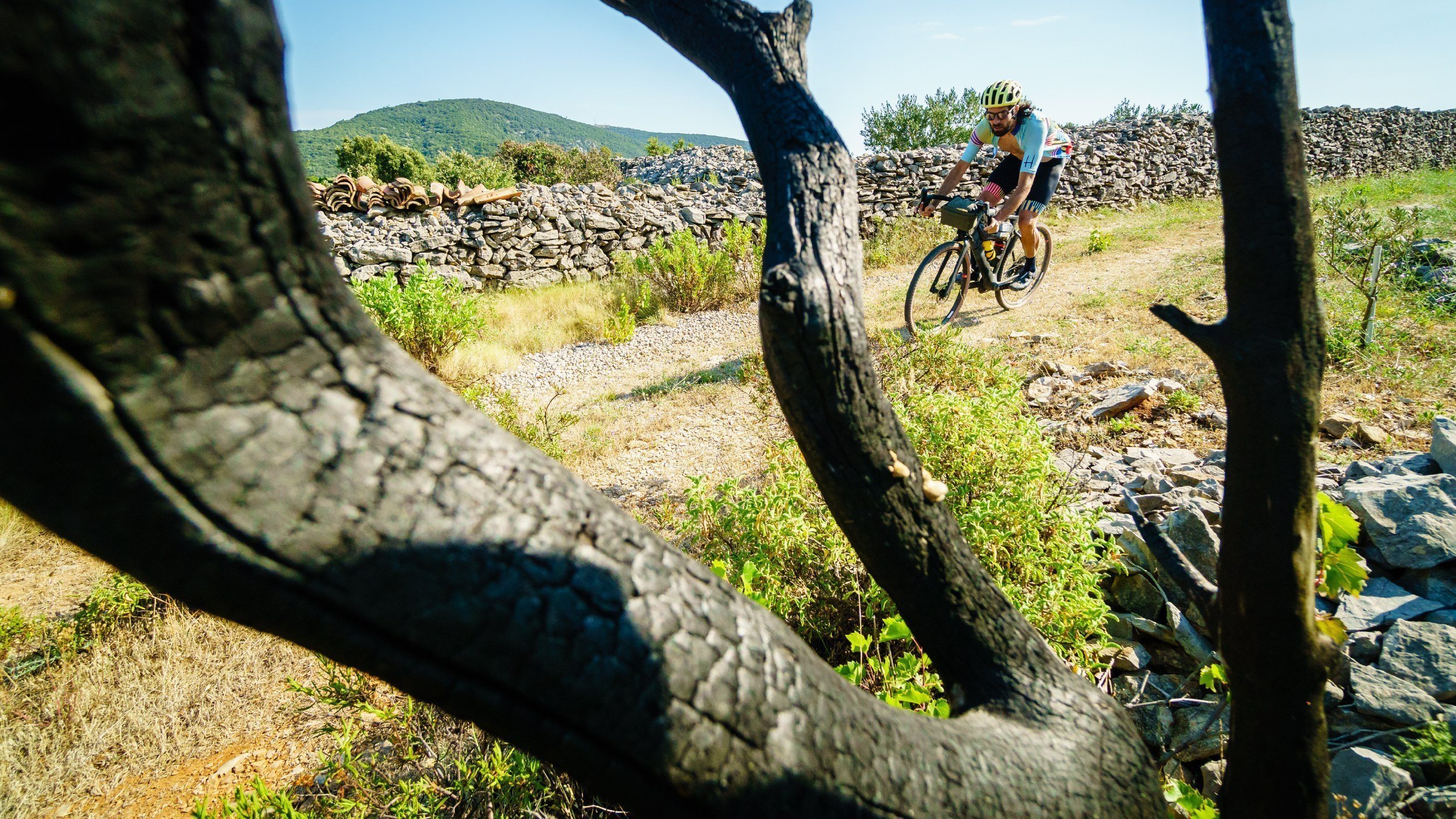 But apparently, those trails haven’t been used in days (weeks?) because we come across a series of humongous spider webs crossing the trail. Every 30 meters there is an spider with its own masterpiece waiting for bugs (or cyclists). Marcel comes up with a system where he will be swinging a big tree branch in front of us, while holding the handlebar with the other hand, for a full hour of climbing on gravel. Tough stuff. We survive after destroying around 200 spider webs, not without some scary moments, and all our helmets and clothing full of spider webs remain…. 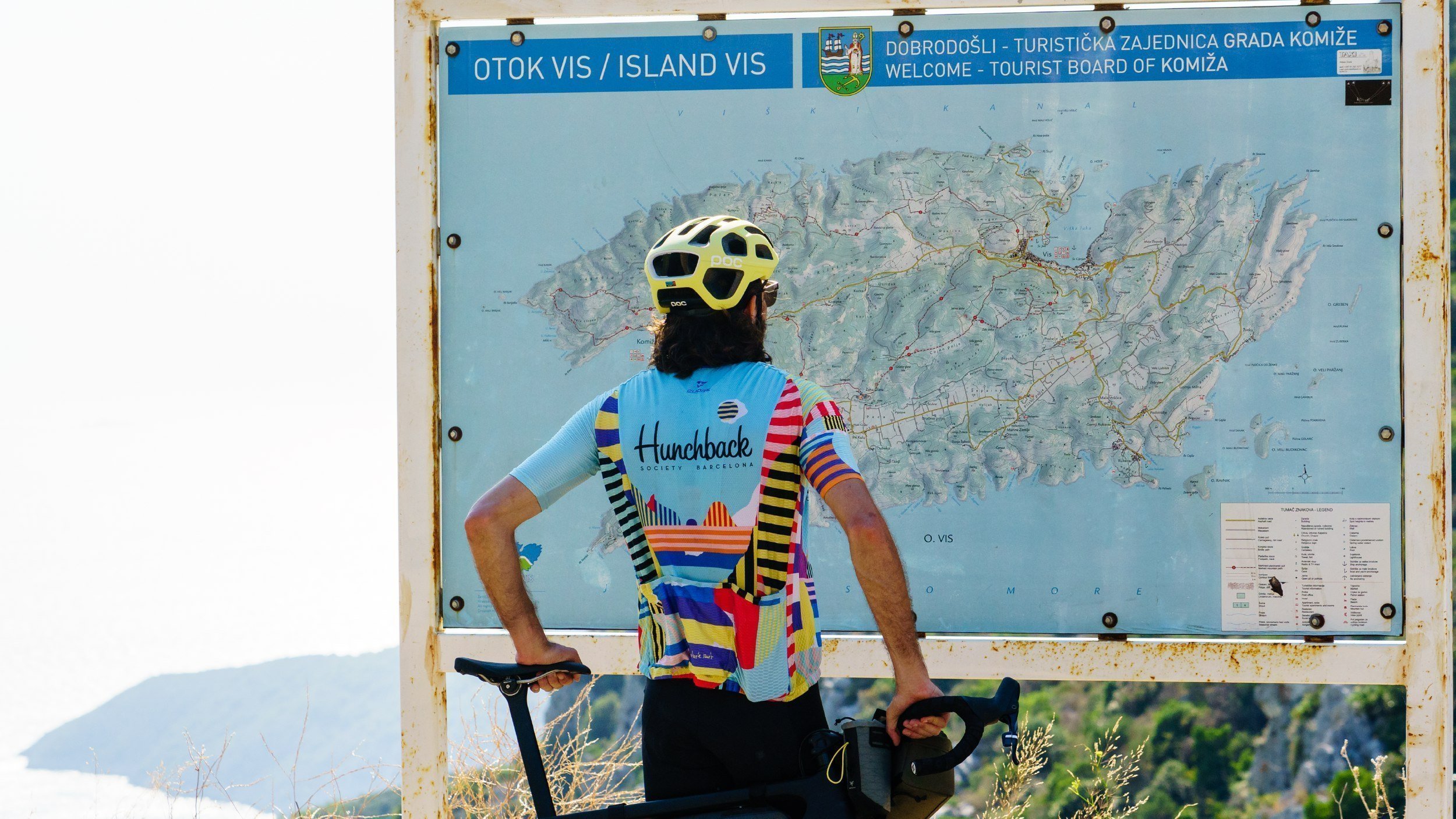 After fighting with spiders on the gravel climb, a very cool paved road with beautiful twisty turns awaits us to get us down to Komiza, the other “big” town in the island of Vis. A welcome descent that refreshes our bodies in the hotter than Hades weather, feeling the sea breeze as we get closer to the fishermen’s port. 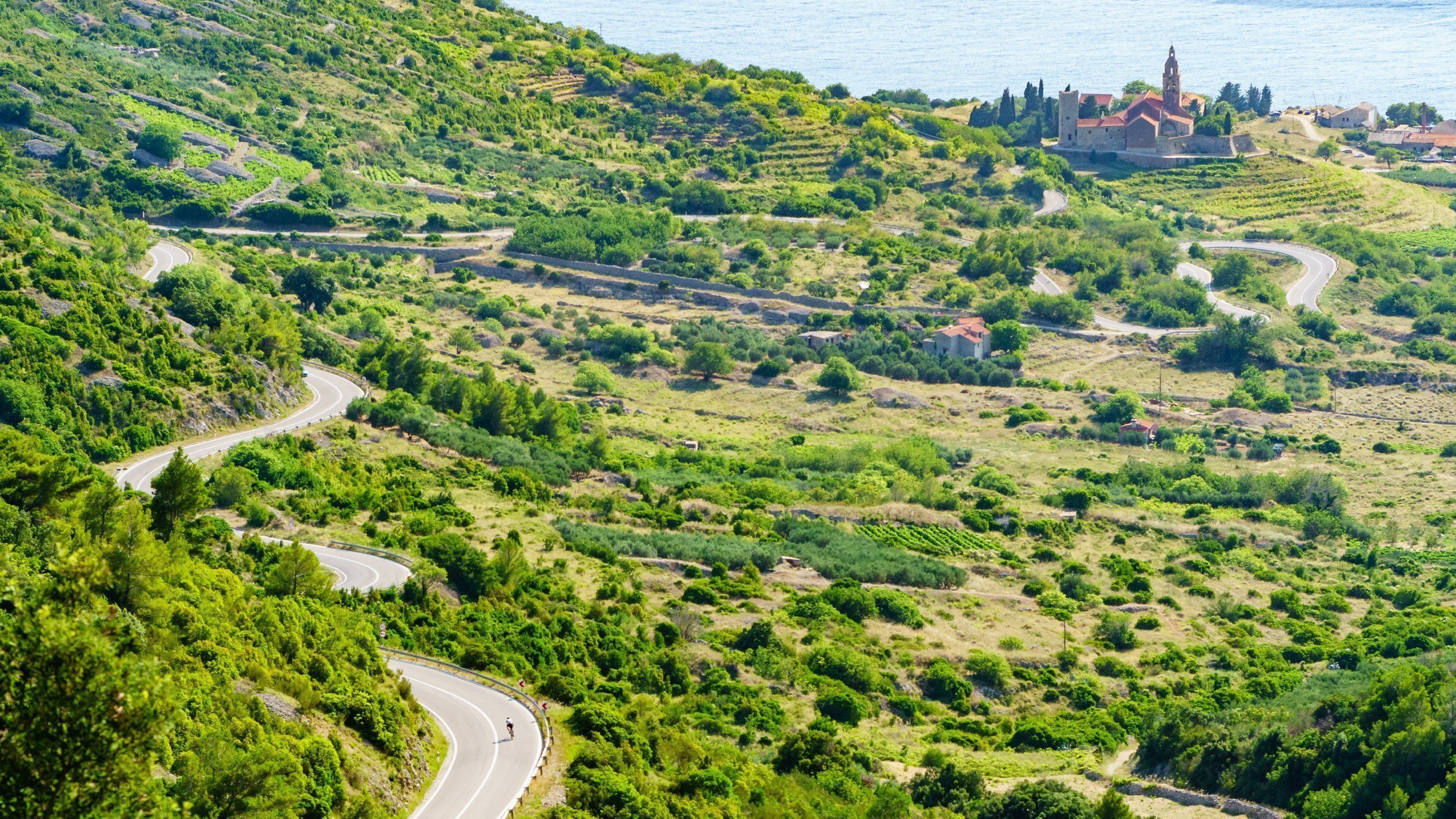 After looting the local supermarket (again) we start a scenic climb with the Adriatic Sea on our right, an idyllic view only interrupted by the annoying sounds of rented 50 cc 2-stroke scooters with tourists riding the island loop. Anyway, the traffic is negligible and we probably find 5 or 10 cars on the whole route around the island, so nothing to complain about. We travel past old churches, abandoned military cabins and an open valley, which used to provide all the vegetables for the island in the previous century. 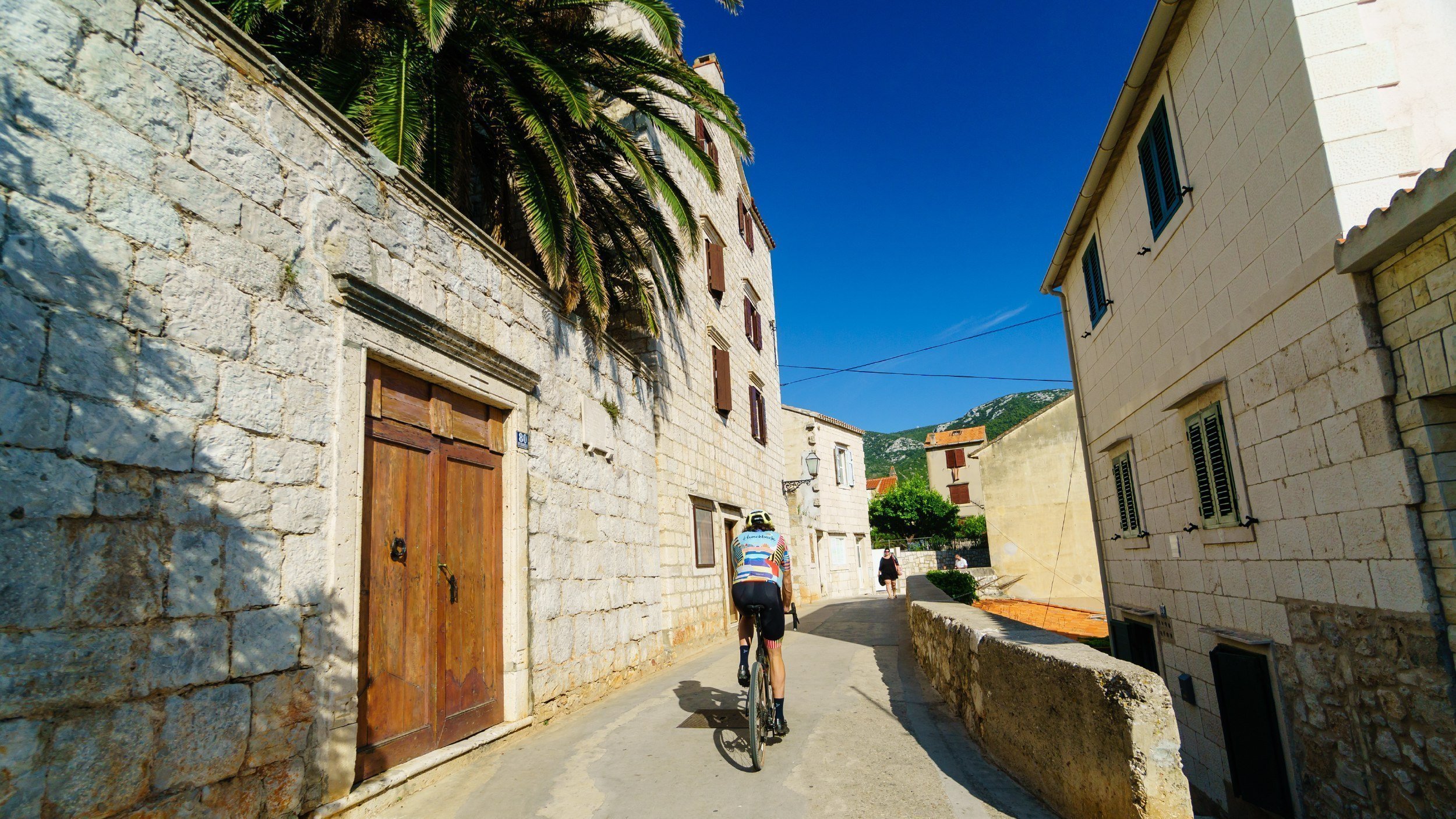 We stop in the town of Milna, decide to follow a mysterious singletrack that we found along the trail and end up in a solitary sand beach where we have our last swim of the day, while the sun is setting on the mountains behind. Magic. 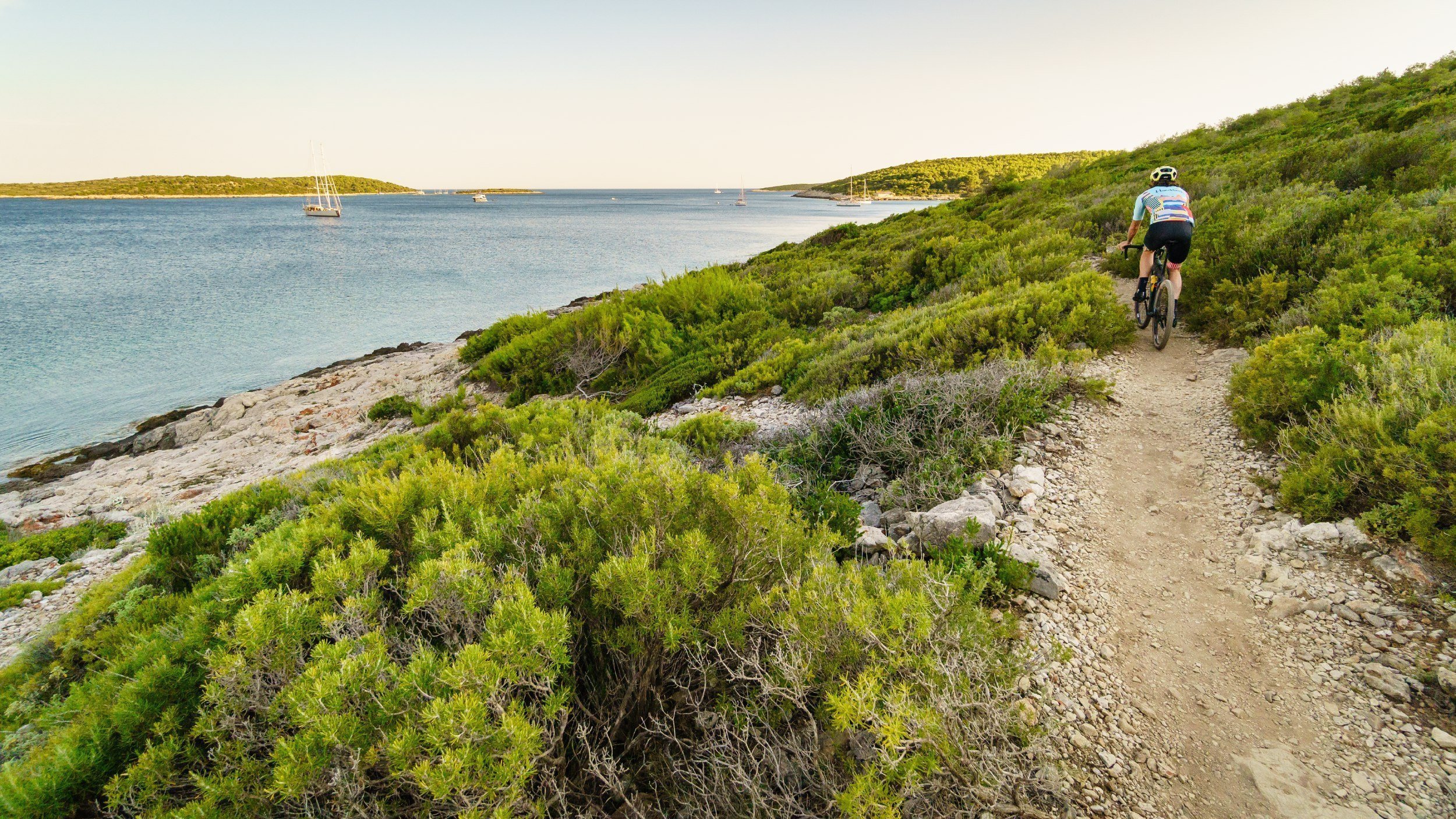 Day 3 sees us suffering some more changes to our schedule and route, because of the rough sea and winds coming, so we had to improvise and again find another route shorter than the one we had planned. Back to Komoot and in 5 minutes we find a cool 25km loop that starts in the old town of Hvar, right where we were heading with the catamaran. Too short a route for our taste but we had no time for more today. You can make it longer easily by extending this same route with the one on the northern peninsula of the island, where some amazing beaches wait for you (bring a Speedo in the bikepacking frame pack…) 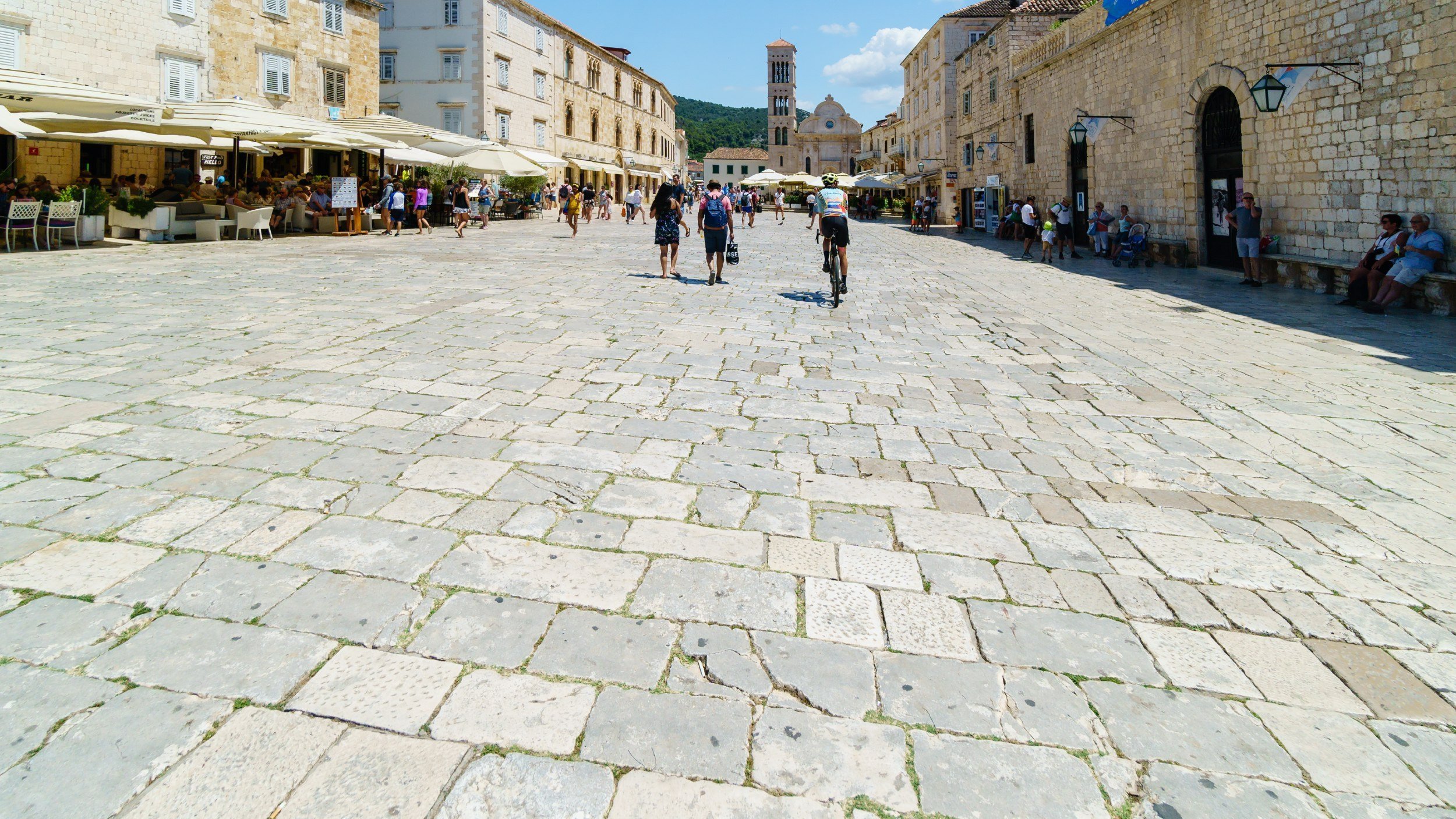 Hvar is a busy island in the summer, packed with tourists from around the world, but if you add the famous Ultra Europe techno music festival (I should say “apparently famous”, cause I have no idea about any music that doesn’t require electric guitars), the logistics get even more complicated… 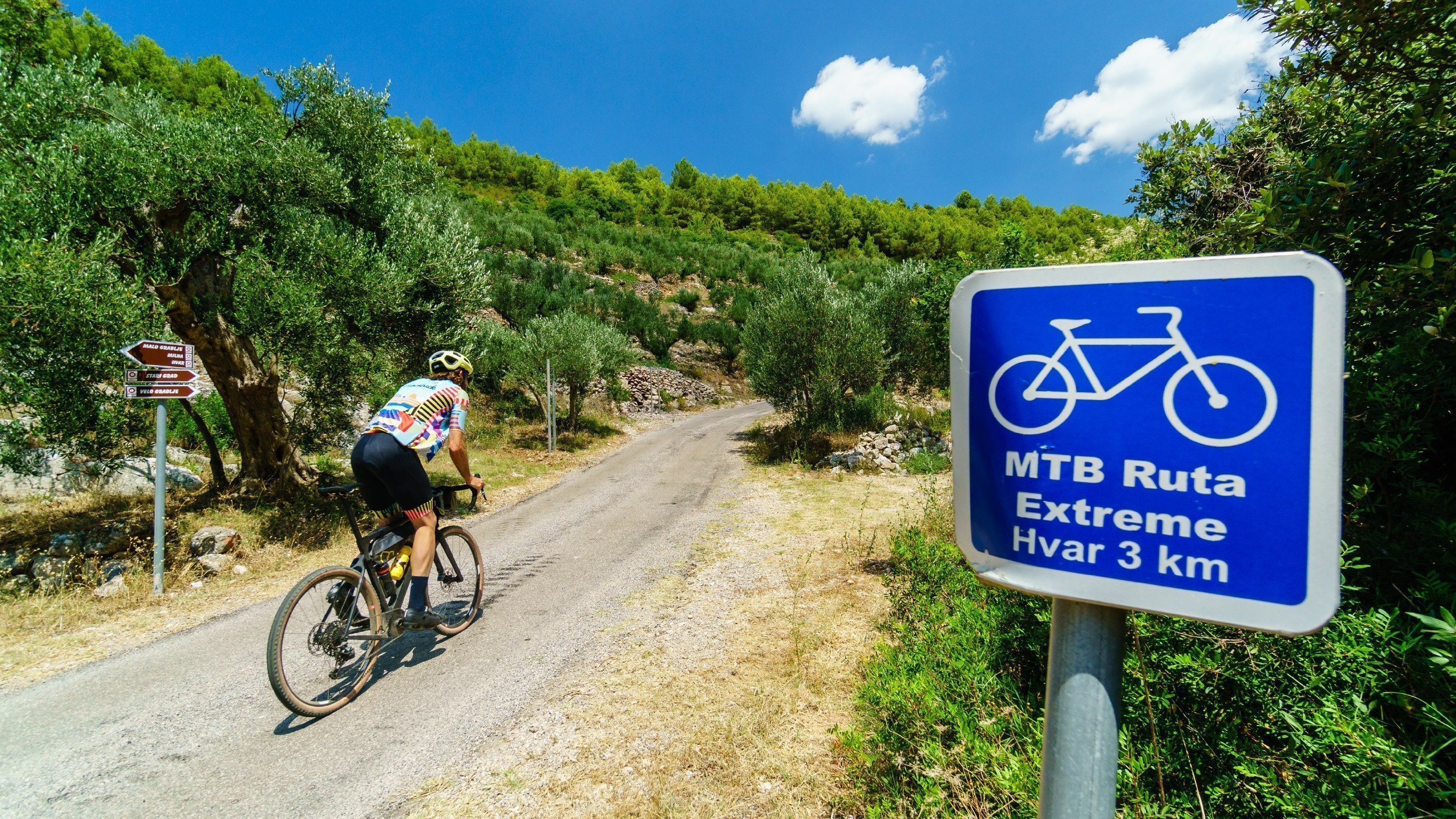 So, as fast as we can, we leave the port, finding our way though groups of DJ wannabees, party-goers, families and local fishermen, riding on the slippery stones of the thousand year old pavé of the old town.To be honest, the route started unpromising, though a maze of Lidl and Spar supermarkets, industrial areas and thrash sites, but a few kilometers later a beep on the Wahoo informed us we were leaving the main road and heading into the forest, though a paved small road that made its way though tall cliffs of white rocks and pine trees, all surrounded by a heavy smell of rosemary and lavender. The asphalt is melting at this point but we were just happy to leave the main road. 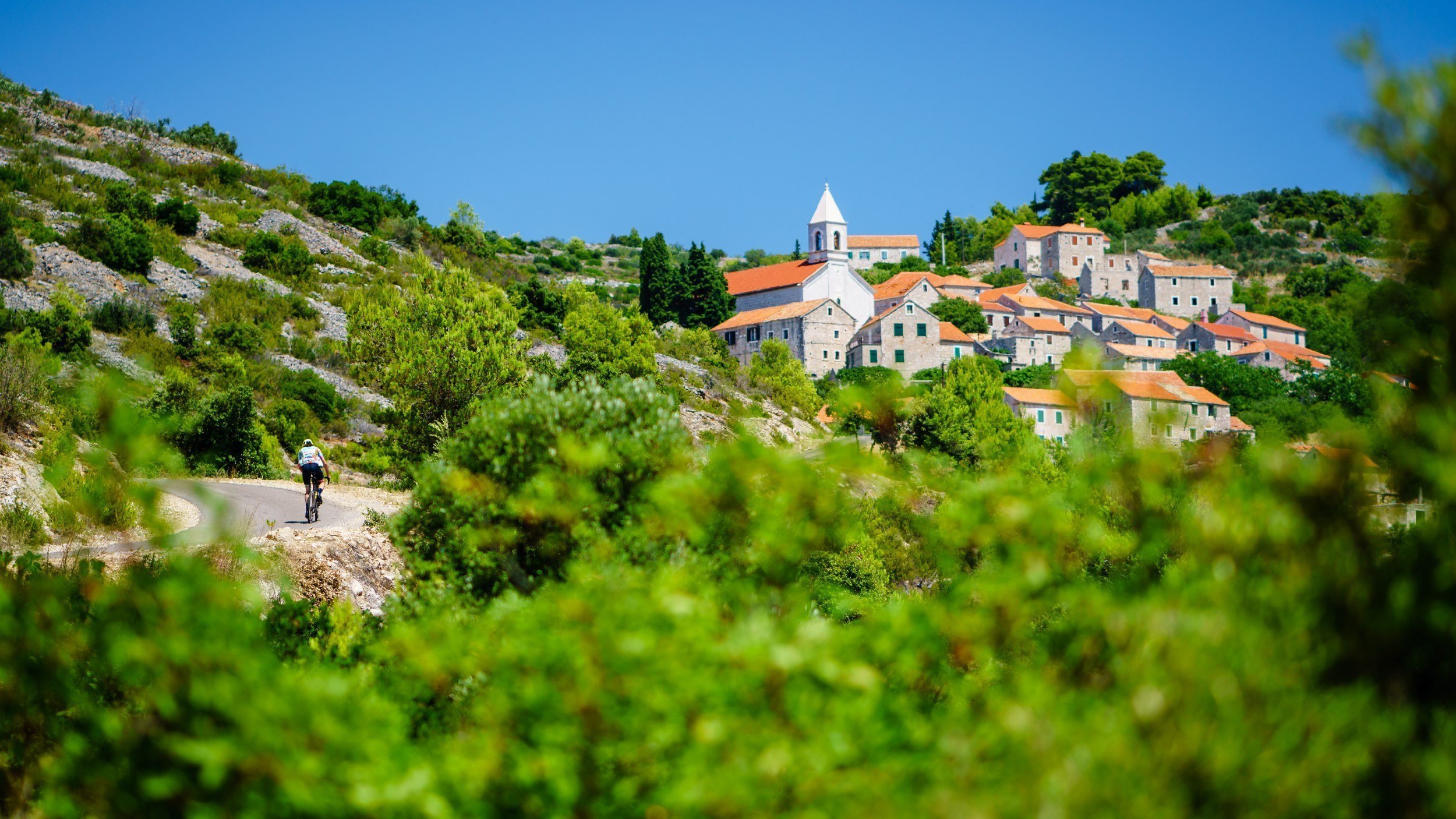 A tougher than expected climb welcome us at almost 40 degrees again (Tip: do this trip in the Spring or Fall, not July -August and you will thank us later), until we get to the aptly-named town of Velo Grablje. We walk through the narrow streets but saw nobody. Ghost town? or just too hot to get out of the “siesta” at 15:00? 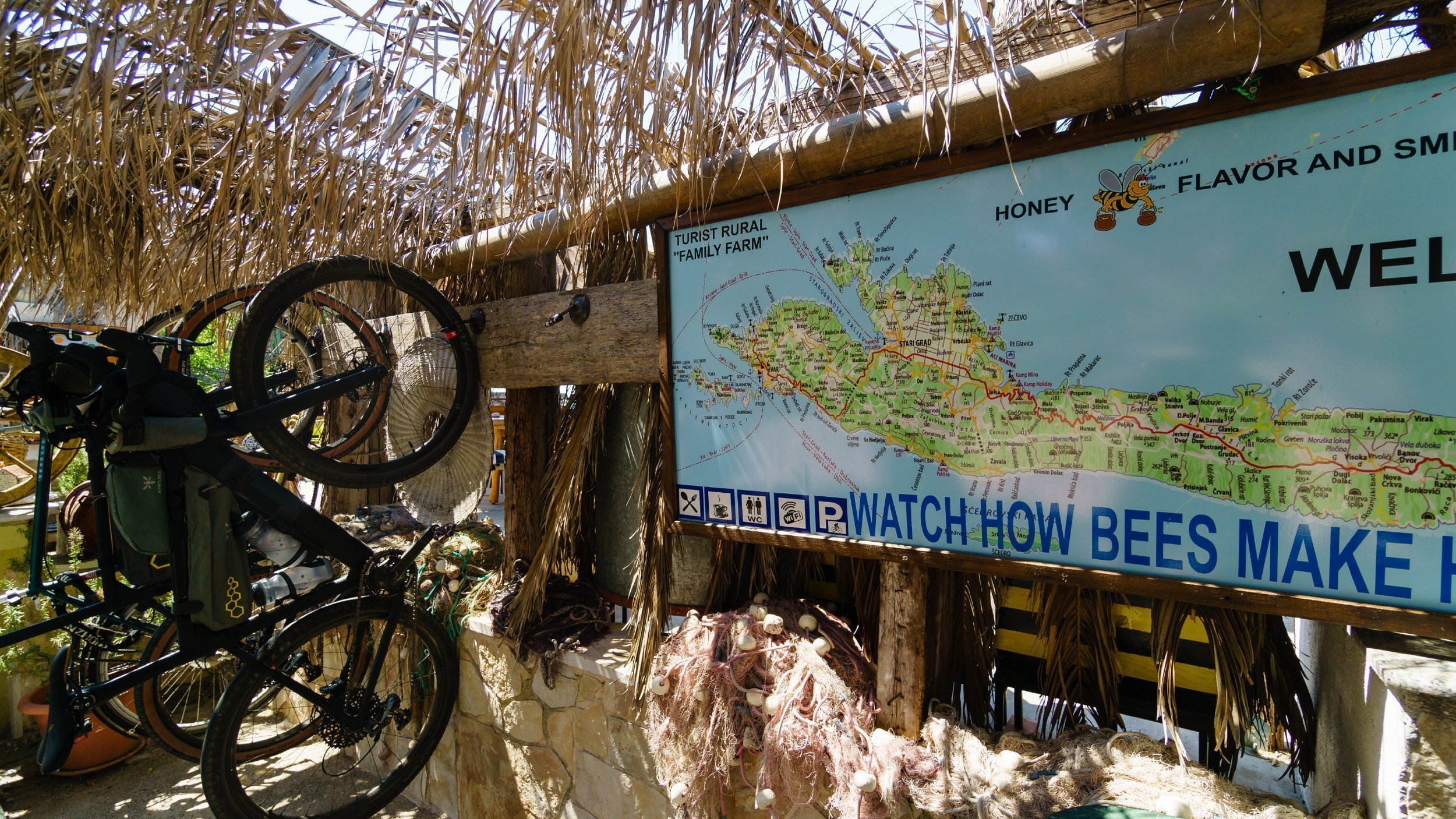 After summiting the Col, a fun descent with 360º views takes us to the next town of Brusje where we find this little gem, a family owned farm-restaurant called Izletiste, with a relaxing terrace hanging on the town’s outskirts, with views of all the Adriatic Sea and the nearby islands. The breeze is fresh and after eating local grilled calamari and locally farmed tomatoes and vegetables, with fresh lemonade with honey harvested 100 m from the restaurant, we even think about taking a siesta on one of the hammocks ready for us… “Fortunately” a couple of families with noisy kids enter, and that convinces us to keep moving. It would have been tough to get on the bike again after that siesta anyway… 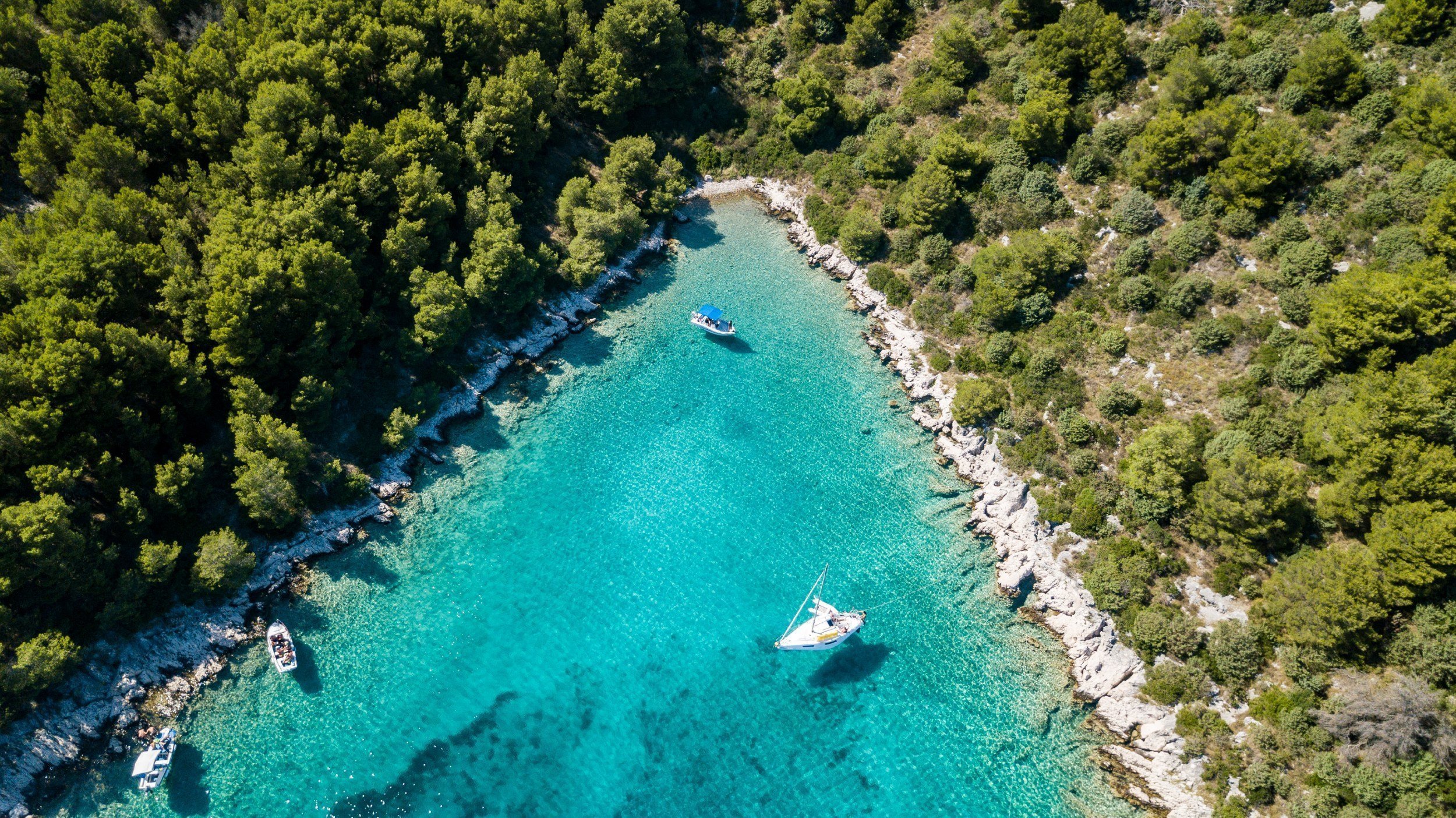 A fast, short descent take us back to the crowded Hvar where the techno music is already blasting from the speakers on the other side of the bay, shaking the stones of this old town. We decide to get away from the DJs and we keep riding along the coastline until we find a piece of coast where we descend with our Exploros on our shoulders and jump into the turquoise waters of the Adriatic Sea. 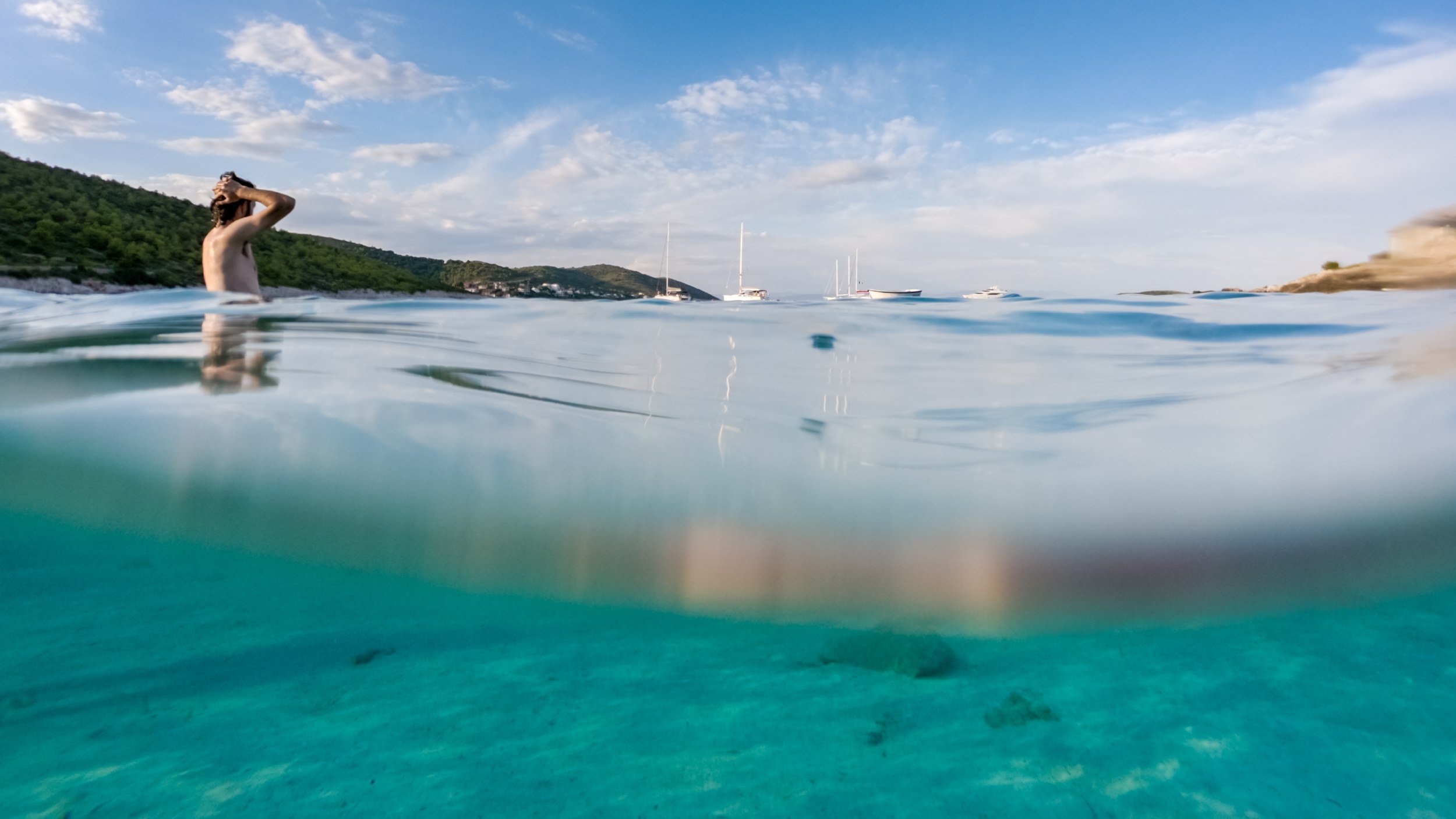 VIDEO of our rather salty adventure here:

CHECK THE FULL PHOTO GALLERY BELOW:

The idea for this trip started with my interest on islands, and we finally agreed that the best way to ride them, instead of using ferries and shuttles, would be to use catamarans as a basecamp from which we coiuld access the roads and trails on the islands.

Fancy a trip to the Croatian islands yourself? Stay tuned cause our friends at Regatta Black are announcing a week long trip for you to taste the best gravel and turquoise waters of this beautiful country. Subscrbe to our blog and to Regatta Black to be updated with more info soon! 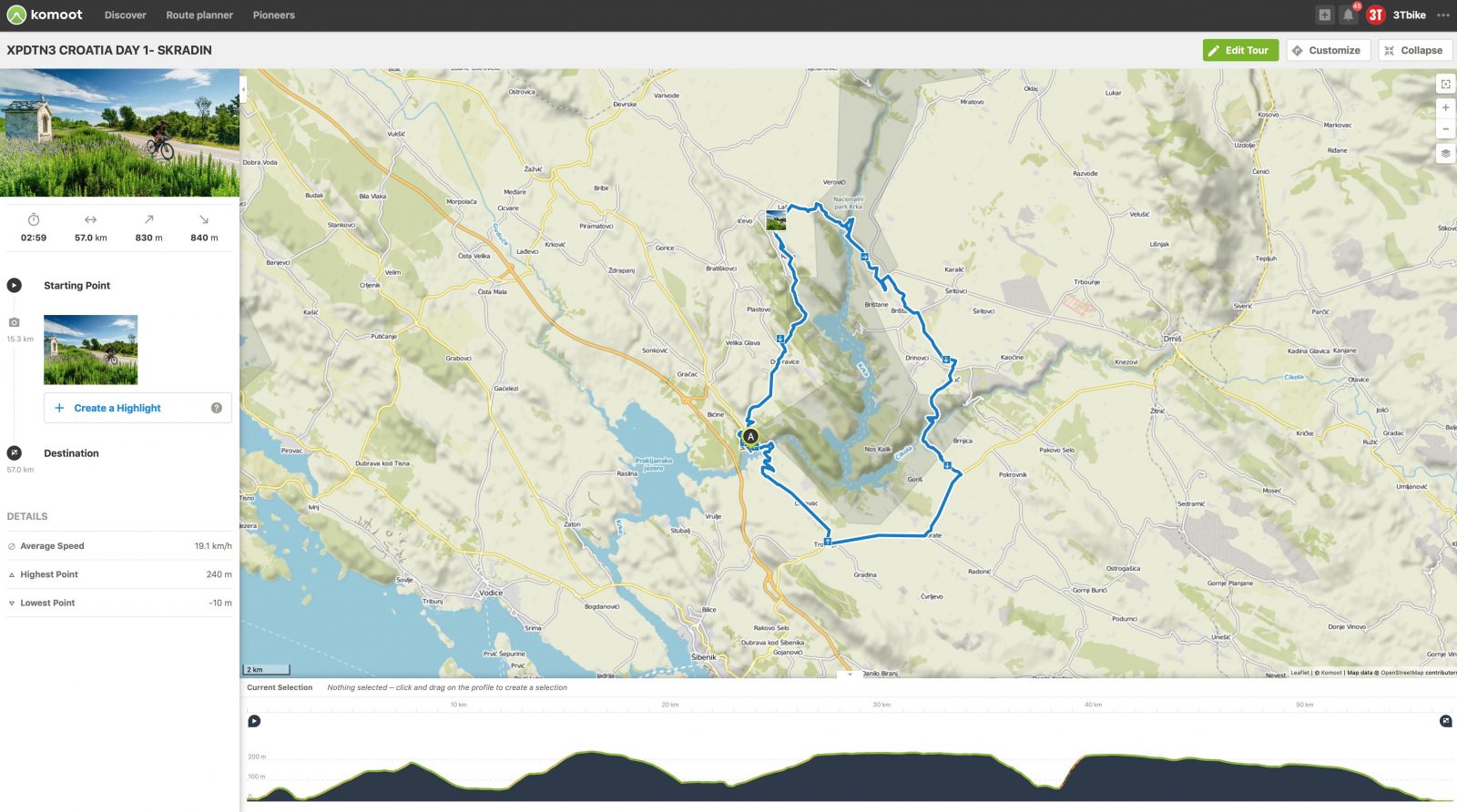 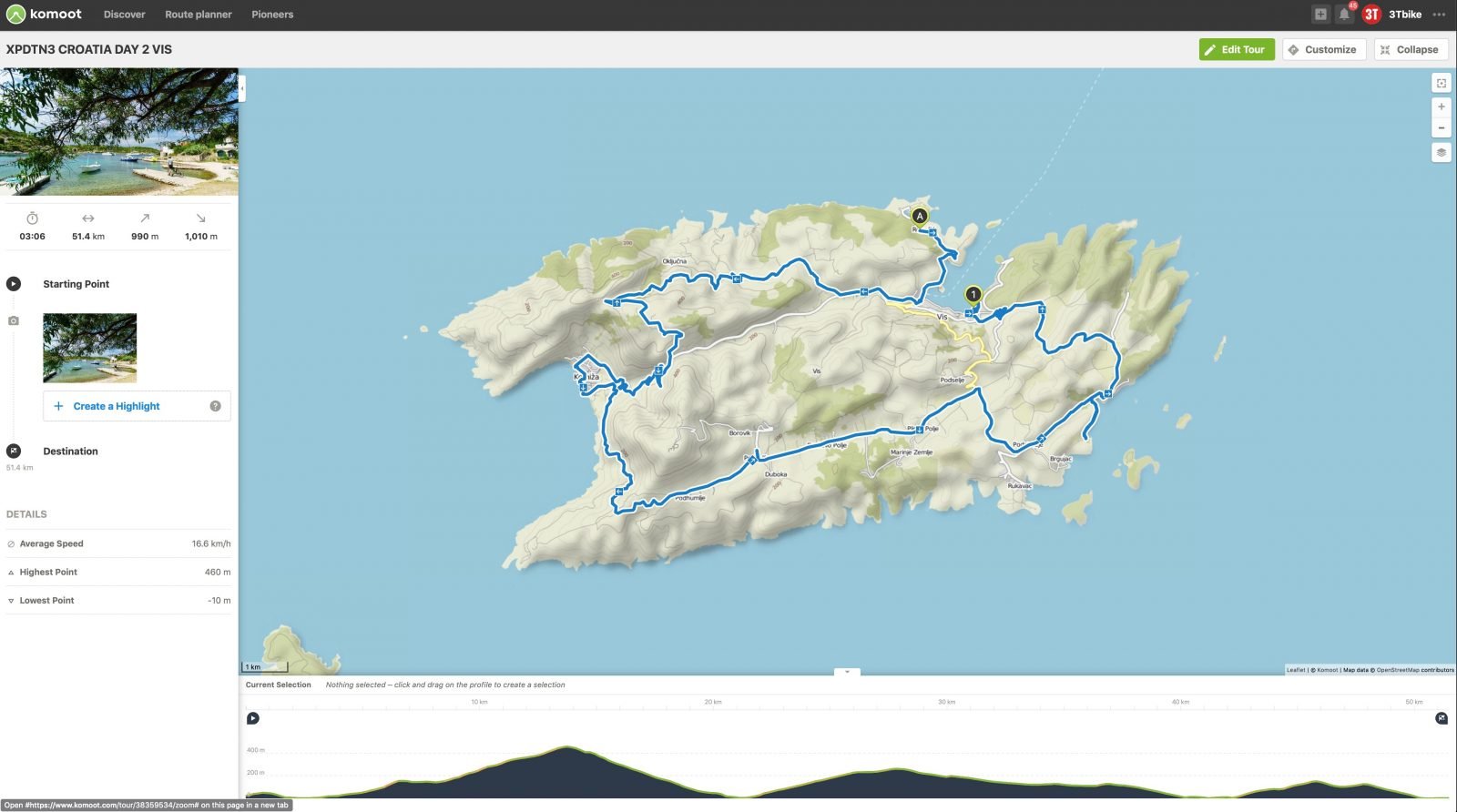 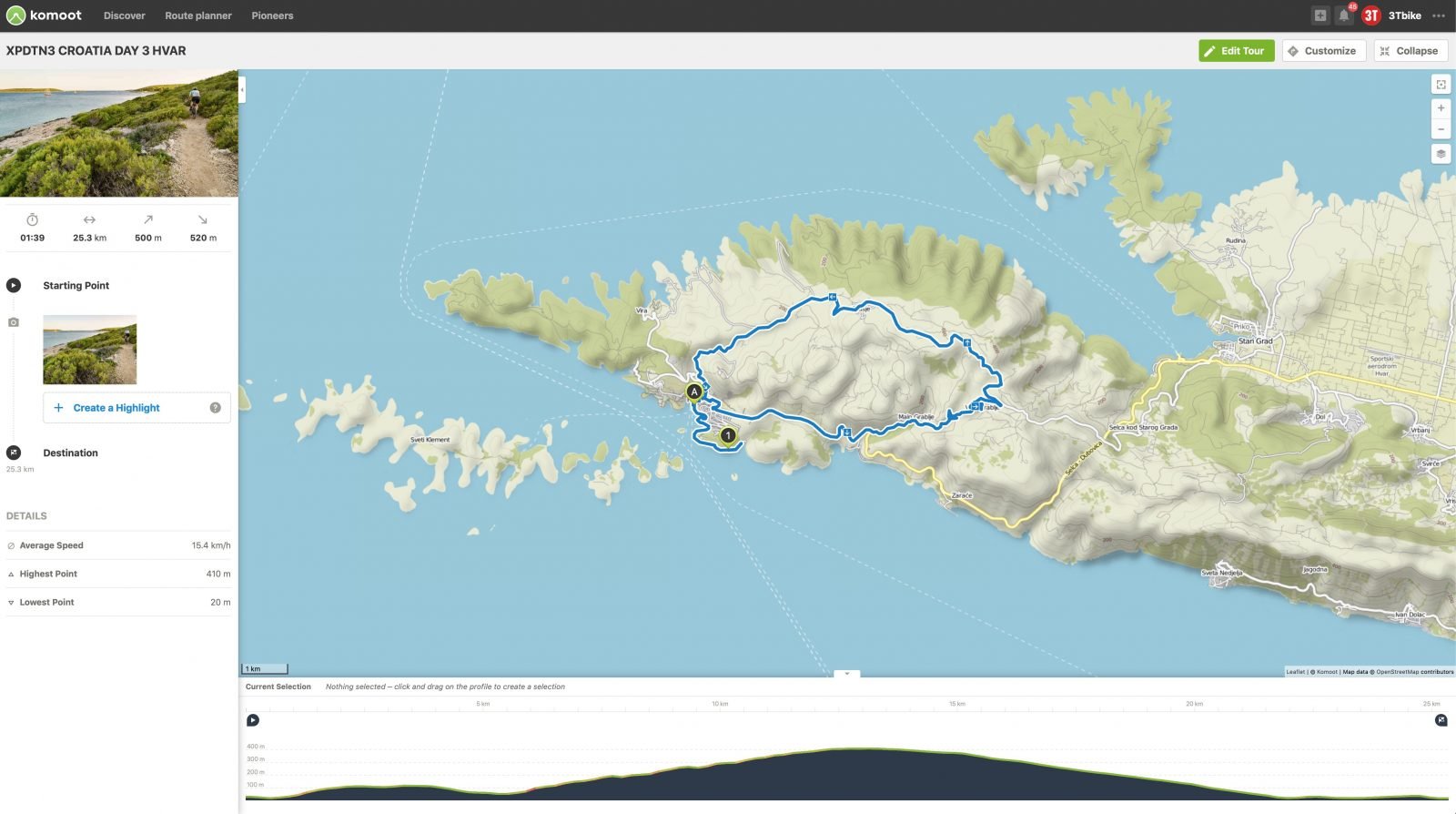 ◄ Previous Story Test 3T Bikes at the Worlds in Innsbruck
Next Story ► Jeroboam 2018: Too tough? Yes please!
Cookies help us deliver our services. By using our services, you agree to our use of cookies.Got itLearn more
...