After our previous RIMBY by Steve Graepel in dry and dusty Idaho, its was time for a European trip, with a little bit more of fresh air, water and sheep instead of Grizzlies…

I hit the road from my house to Molls Gap with a motivated mindset, clean bike and of course a pocket full of food. 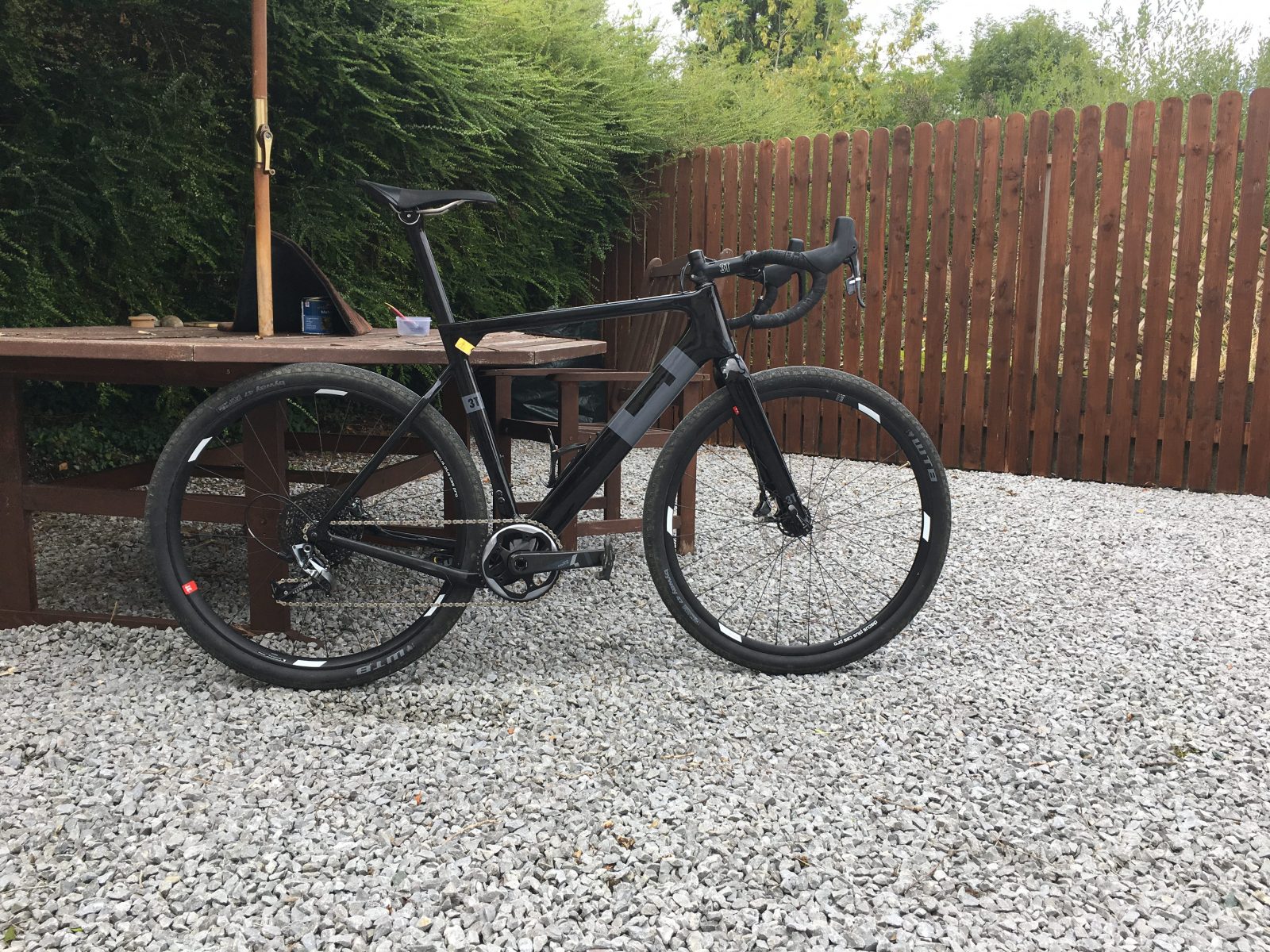 My first task is to take on one of the longest climbs in Kerry, on this ride I don’t get to tackle all of the climb, instead we get to take on a gravel-ish road which climbs the other side of the mountain. This gravel path I took on is part of a walking loop around Kerry called the Kerry Way and will take us straight to Kenmare. It can get very steep and rocky here, so it does take some bike handling skills to get up here but once you make it to the top it is certainly worth it for the amazing views over rural Kerry. Another great part of this is the views are beautiful in all weather conditions. I started the ride a little later than I had intended so it was quite a rush to get to my hotel for the night before it got too dark and I didn’t take many photos in the earlier sections of the ride. The trail from the top to Kenmare is a lot less gnarly than the Killarney side but is much more suitable to ride down for anyone short of Aaron Gwinn and because its not so dangerous I could really send it without being worried of ending my ride too early. 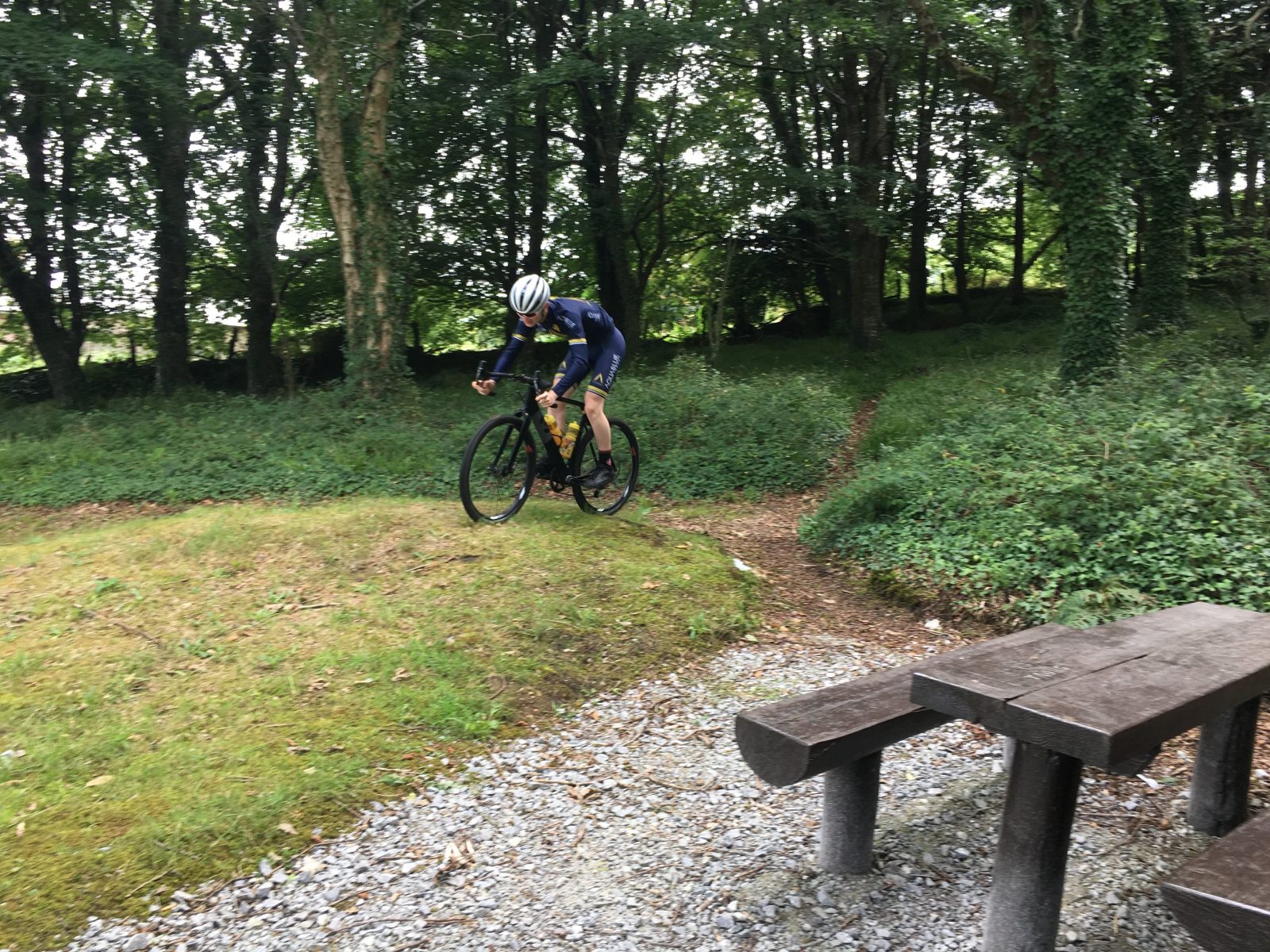 I safely made it down and realised the rain was beginning to get quite heavy, so I stopped into Kenmare for the first stop of the day in a little café for a coffee and a bit of cake. The rain didn’t last the long, but it was still a good excuse to have a coffee and some cake. From here to my stop point for the ride is an undulating and long road, all well tarmacked with some nice views of the coast and a good place for one to do some TT efforts on a normal road bike. 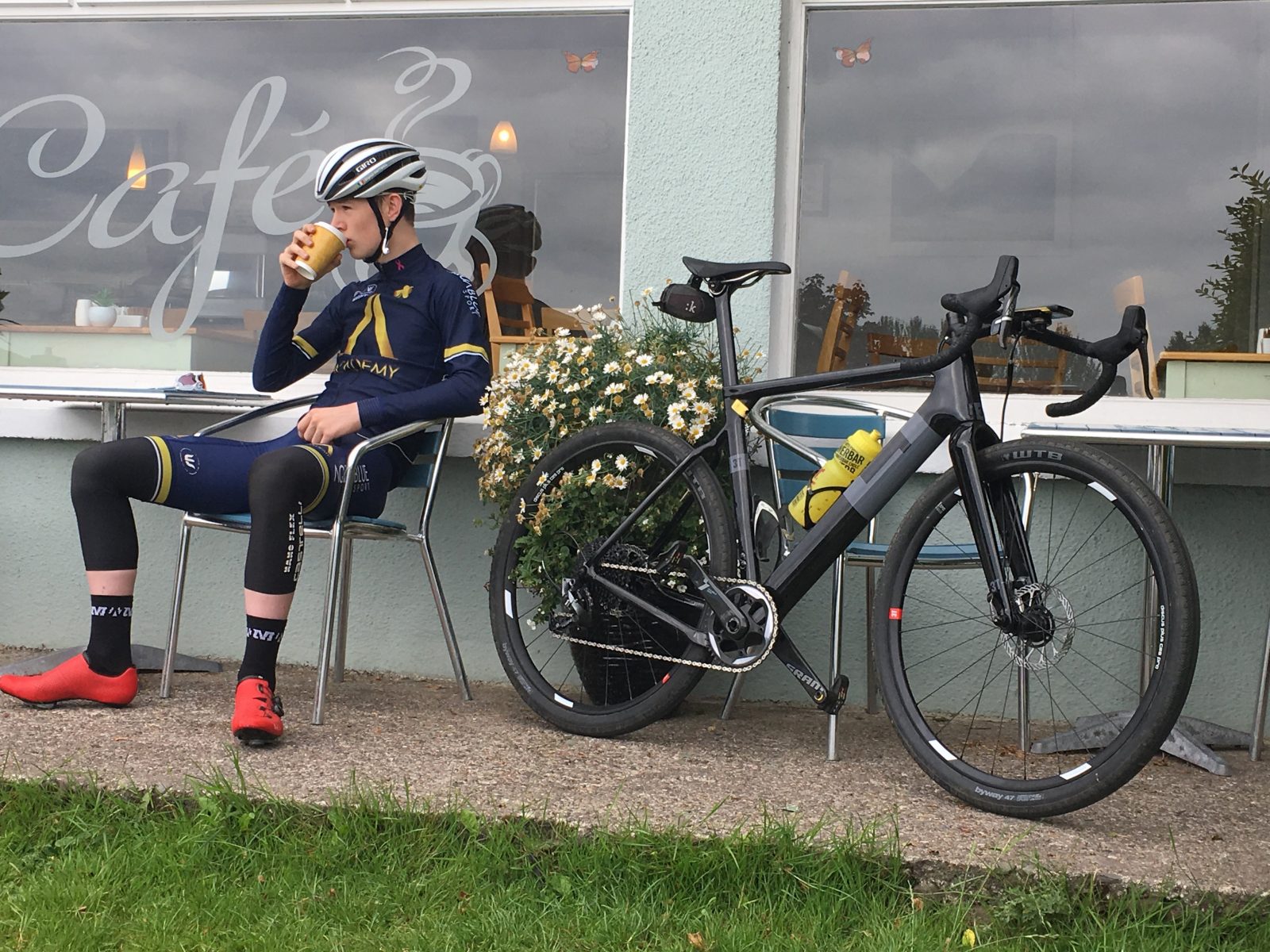 Just before dark fell I made it to Parknasilla, where I stopped for the night. My hotel for the night was the Parknasilla Resort & Spa, a four-star hotel set within a 500-acre tropical paradise of islands, inlets & hidden beaches. Had to most mentally draining part of the ride behind me. I reached the hotel and went straight for my room because despite the smooth roads, the 52mm tyres at a max pressure of 50psi on a set of 27,5” wheels aren’t the most efficient choice, maybe some 700c with 30mm tyres would have been the best for this kind of ride, by adding some slight detours on the route a Strada with 28mm tyres would have been an amazing bike for this ride.

I had a huge breakfast at the hotel (taking full advantage of the breakfast buffet offered) and I was eating road by 08:00. The next task I had to tackle was a local legend of a climb, Ballaghbeama. Between the hotel and Ballaghbeama is a small village called Sneem (quite a popular place for cyclists to stop during the very famous ring of Kerry or even a normal training day) and from sneem to Ballaghbeama is a slight ascent all the way to get to the actual climb where the gradient quickly kicks up. Ballaghbeama is certainly one of the hardest climbs I’ve ever ridden on a road bike, I am certain that it is even harder than riding the Koppenberg in Flanders, but what I failed to realise was that this time I had a 42t chain ring and a 42t sprocket as my easiest gear today which really took the bite from the climb, just to put into perspective that for the final kick up of the climb of roughly 1km I, as a 60kg rider I have to put out 400 watts just to get up to the top of the climb. 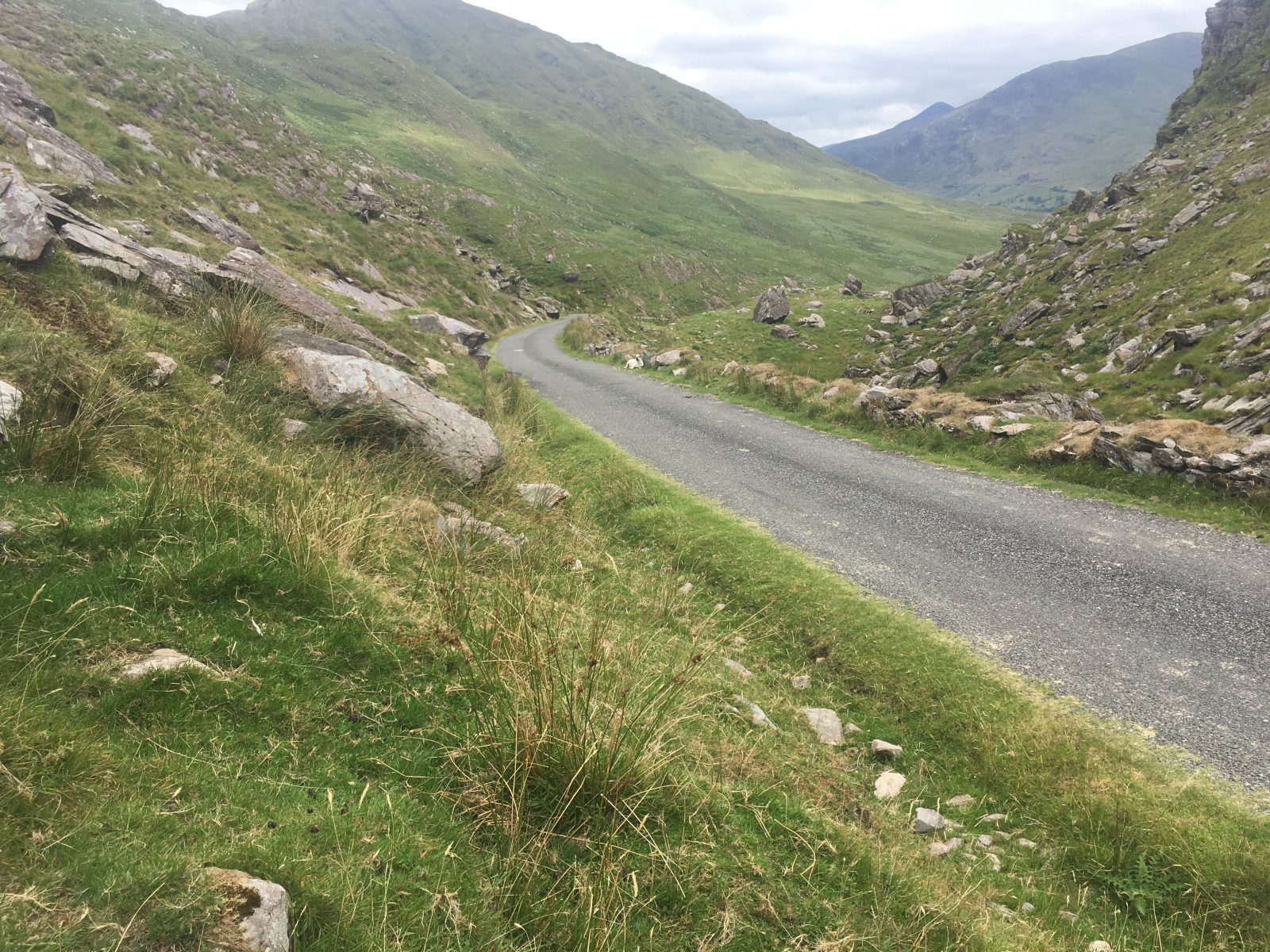 Today though with my very easy gears I even had time to pop a wheelie. The views at the top of the climb are an exact representation of what people imagine when they think of Ireland. 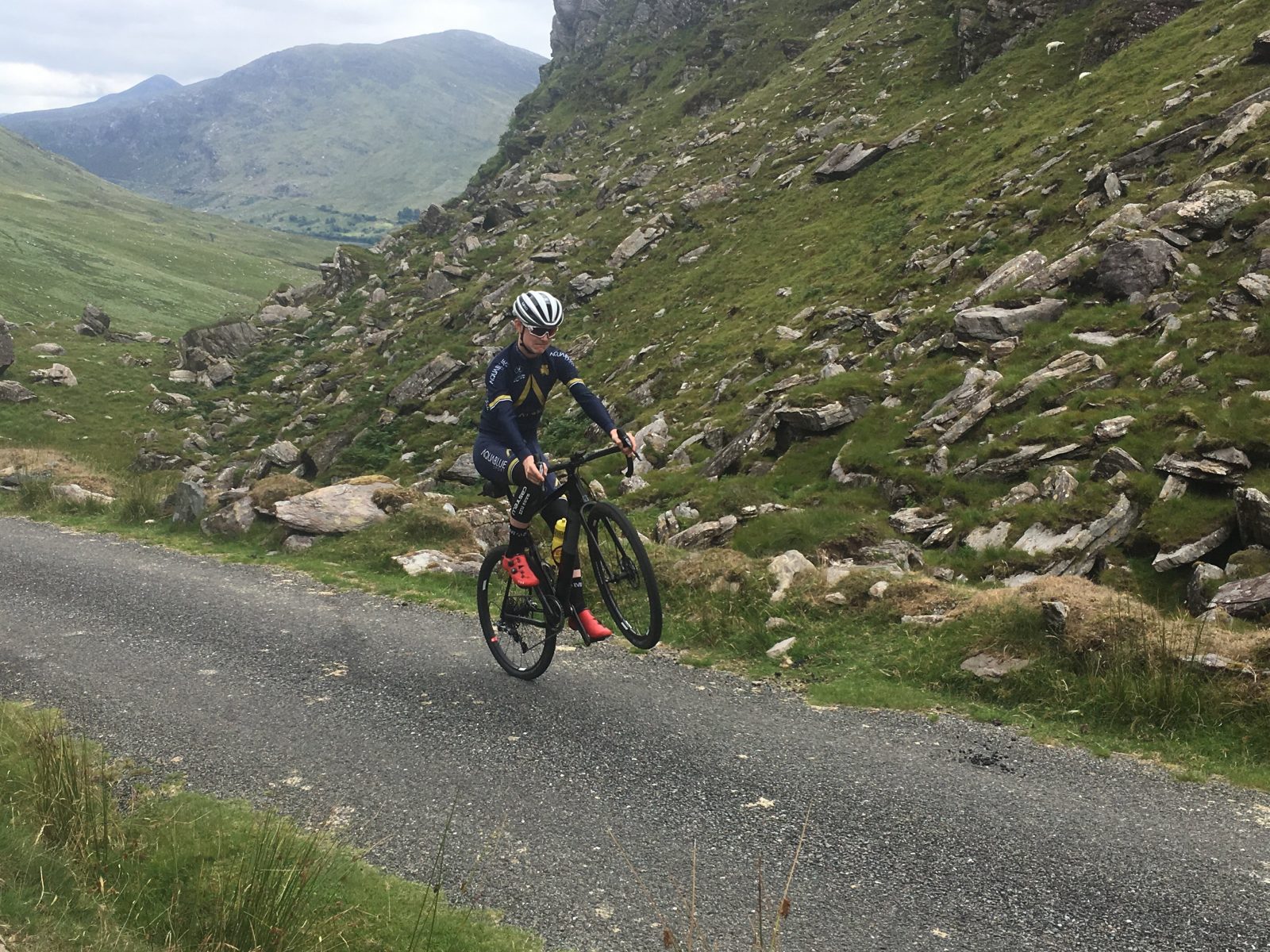 Of course, as a reward for taking on the gruel climb the descent is very fast and flowing with some beautiful views of hidden valley’s and rural Ireland off the side. At the bottom of Ballaghbeama there is a short cut one a could take skipping a large proportion of the ride, as a matter of fact it cuts out all the riding by the coast but for someone struggling with the distance it could be a great help to take them straight to Kilorglin. Between Ballaghbeama and and our next climb Ballaghisheen I came across a very old phone booth and thought I would try and phone home, I decided against that after getting a closer look at the booth. 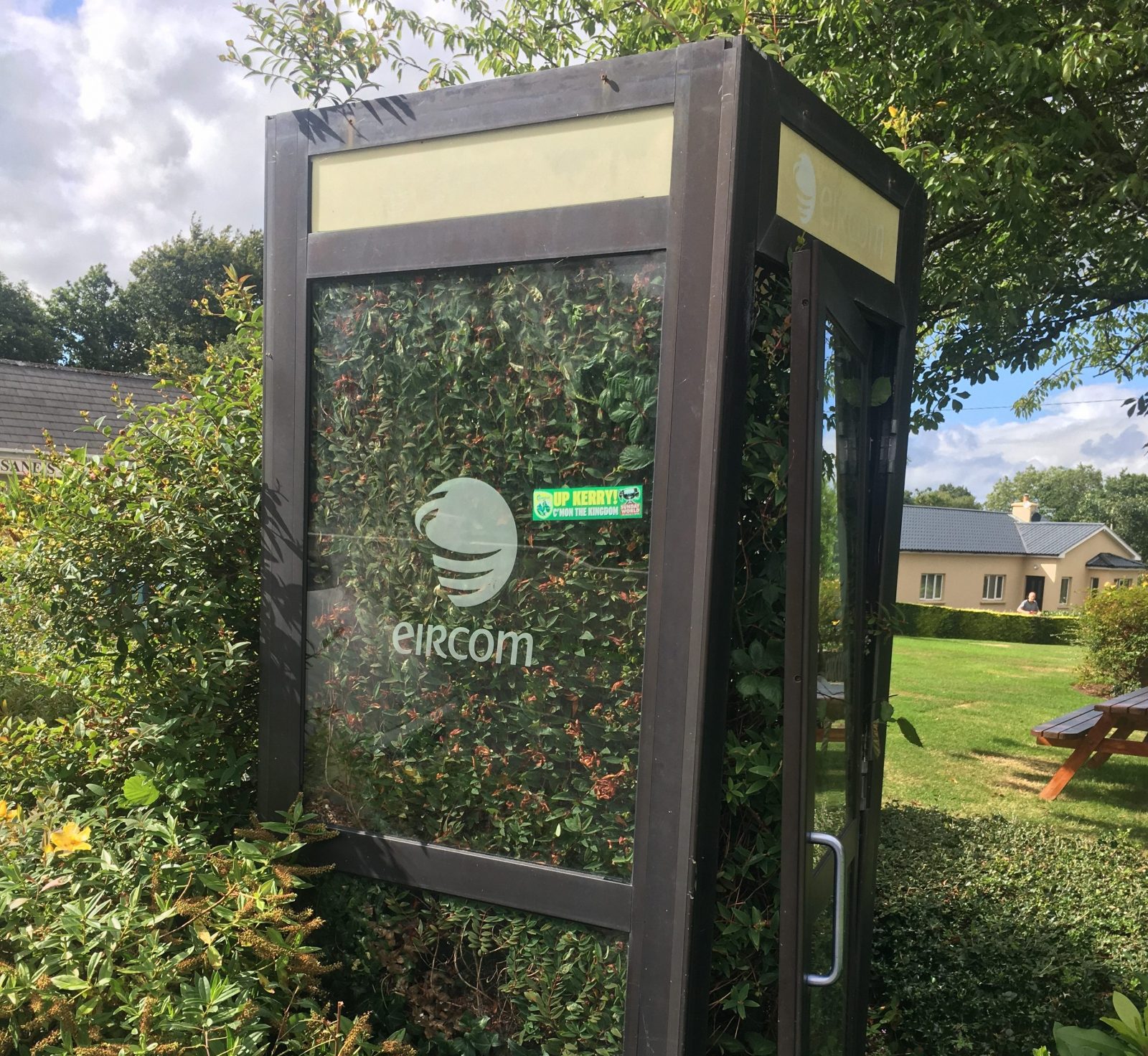 Shortly down the road from Ballaghbeama I was back to ascending up Ballaghisheen this time instead, this climb wasn’t as hard but was still a challenging climb. It’s a nice climb to ride, and upon reaching the top the views going down the other side are beautiful. The flow of the road heading into Kileeniagh is quite a pleasant change from the previous climbs I had just fought.I passed a seaside village called Waterville, I didn’t go through, but I had to mention it as it is a place beloved by very famous actor Charlie Chaplin. 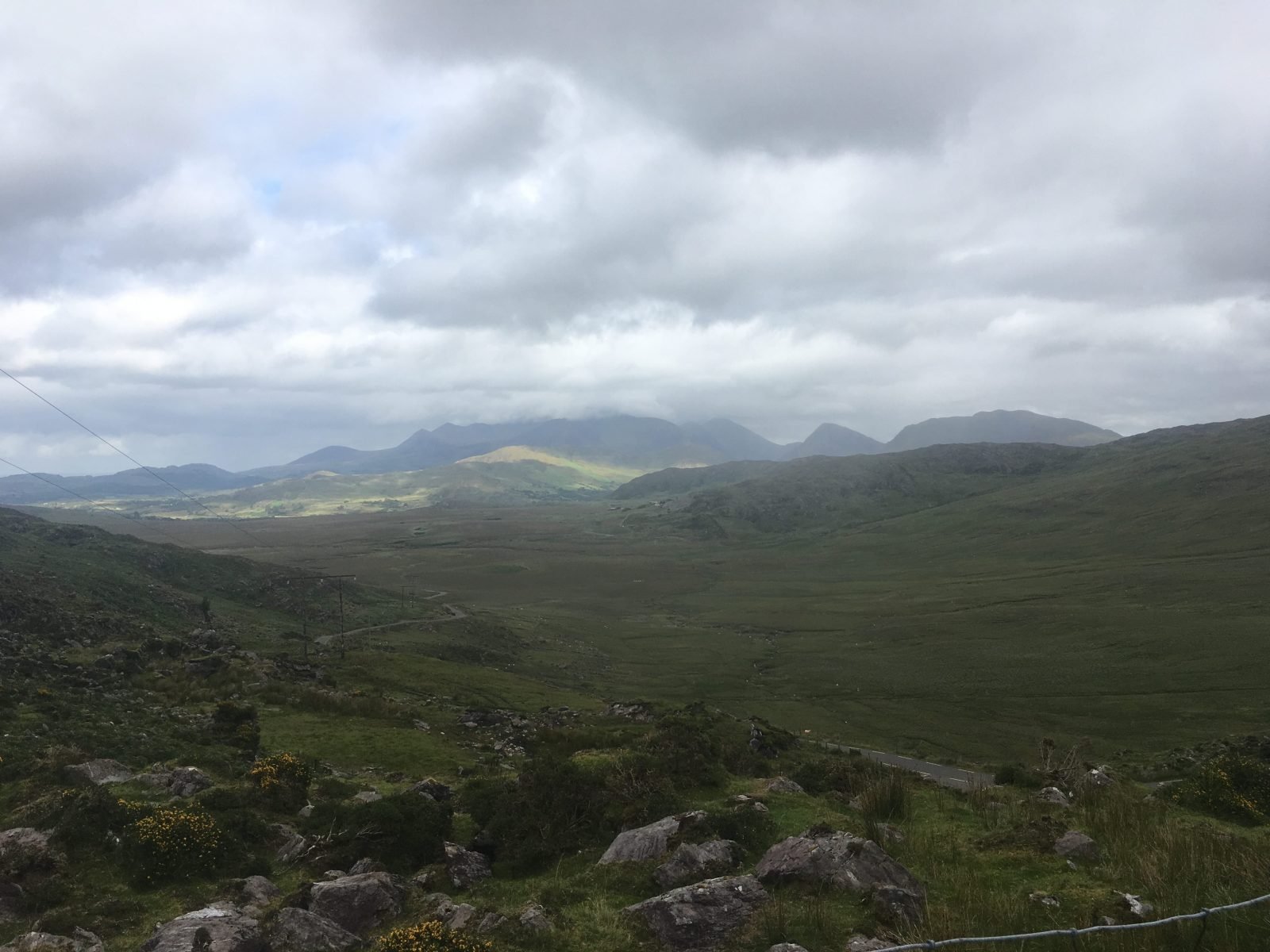 The next town I passed through was Cahirsiveen, where I stopped for another nice little bit of food in a small café quite aptly named “Café-siveen” which was packed out the door while I was there. Cahirsiveen is a very a part of the Gaeltacht meaning that people who live here all speak fluent Irish with each other unlike us in the rest of Ireland. Between Cahirsiveen and Glenbeigh, our next upcoming town.  are some beautiful costal views to help the time pass. 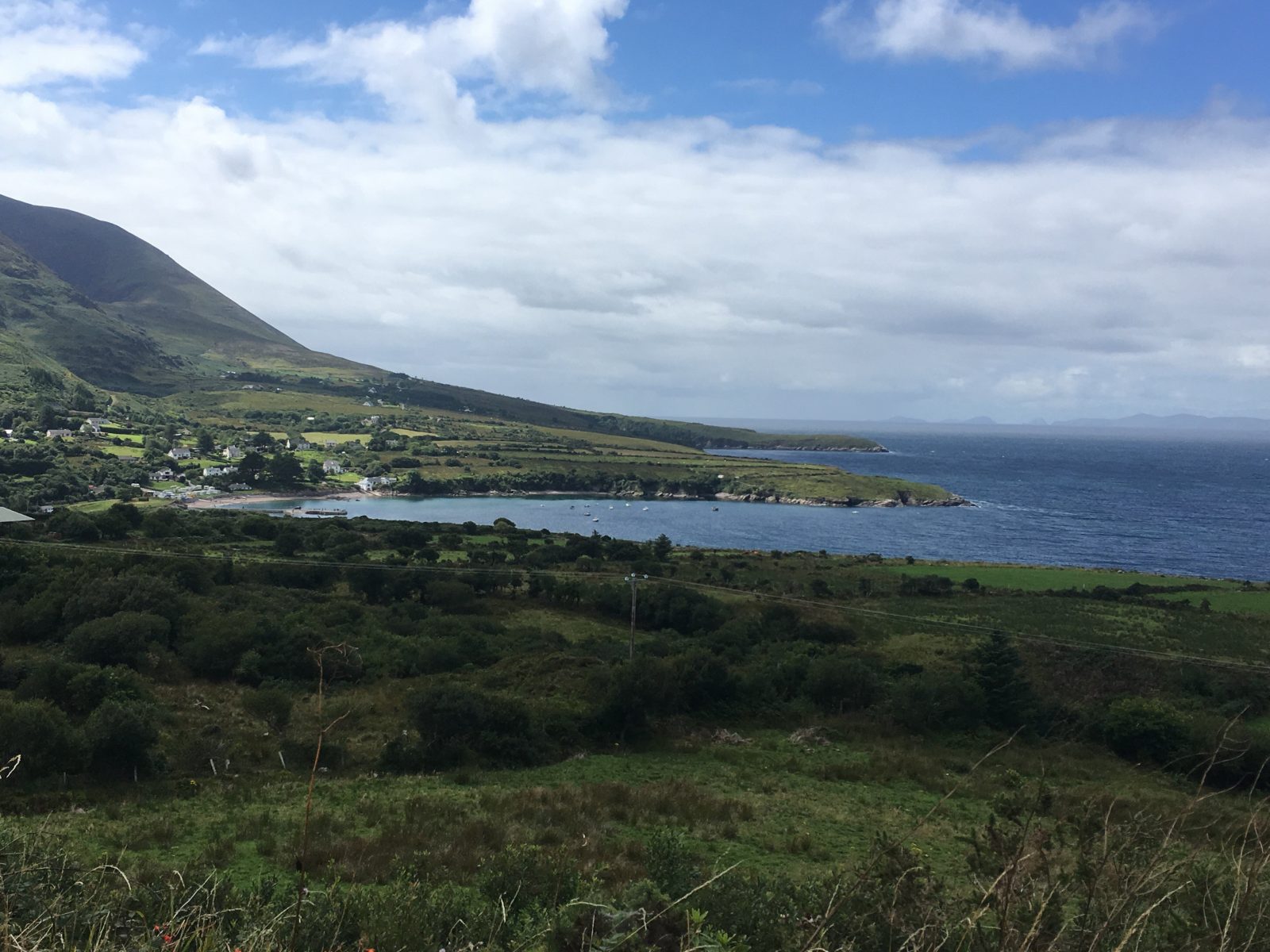 The next big town following Glenbeigh is Kilorglin. 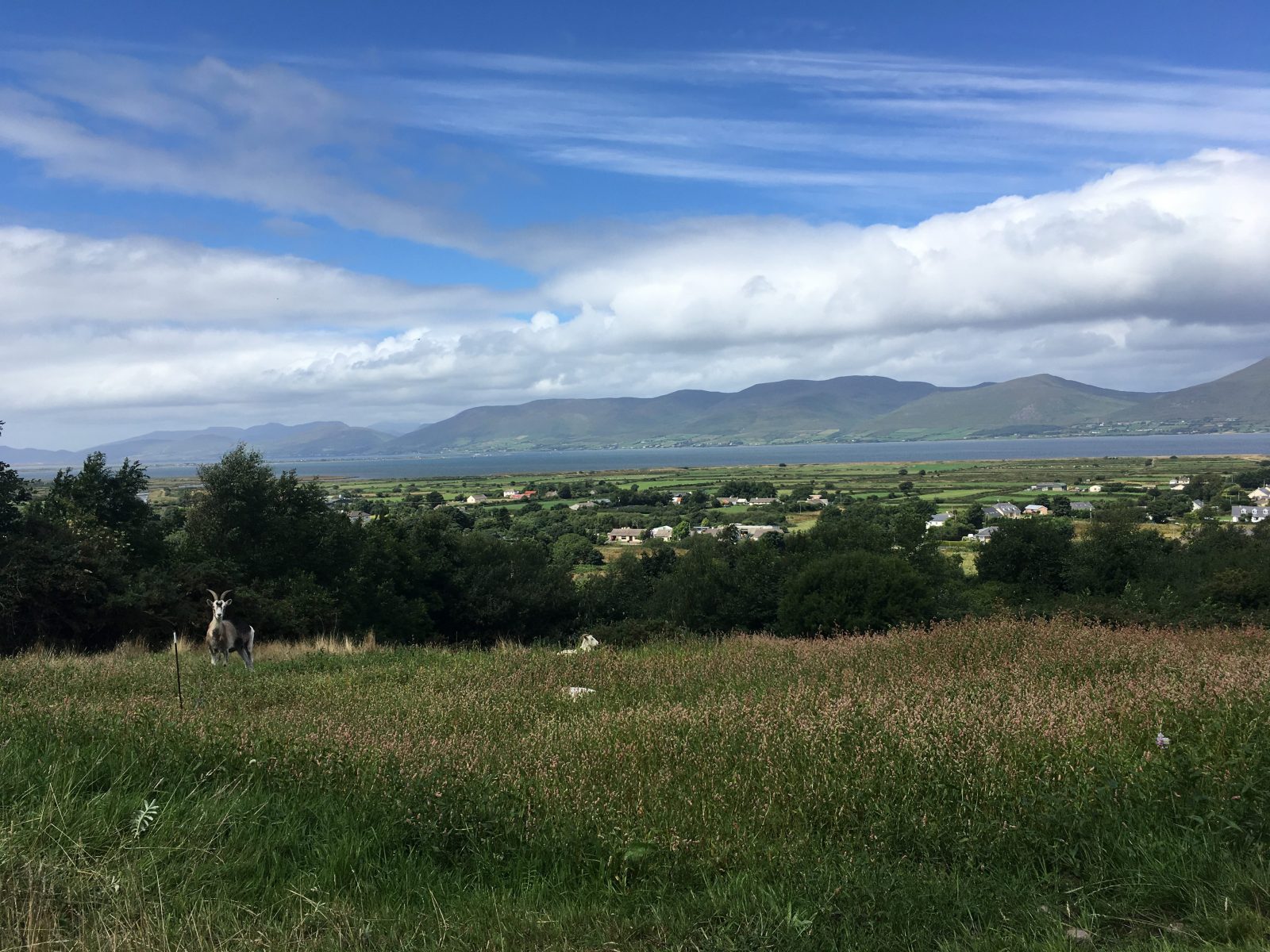 One of the biggest towns that we will be passing through is Kilorglin, home of a very well-known bakery called Jacks where they supposedly make the best apple pie’s in Munster and maybe even Ireland. I passed through kilorglin relatively quickly and kept heading for Milltown. On the home stretch now and Milltown is the last town I hit until I reach home in Killarney again. Just coming out of Milltown I was starting to get hungry and decided to stop at a little picnic area for some food and a quick sesh on the mountain bike trails just behind it, a show of versatility this bike can do, straight off the road and is ready for some soft MTB trails. 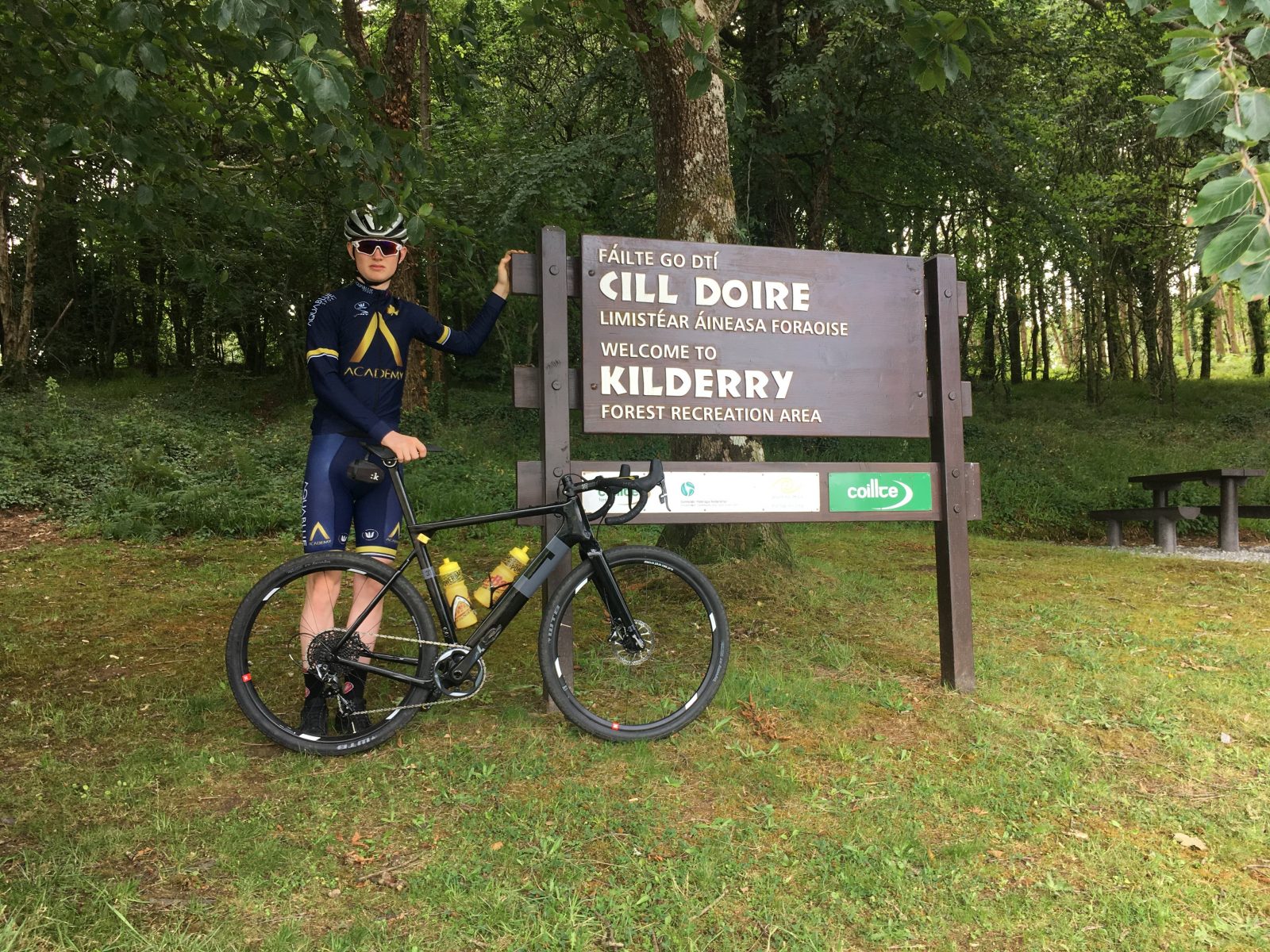 Passing through Faha is mostly just a very long and straight road the droops in the middle making a slight downhill at the start and a slight uphill at the end of it too, a perfect place to do a tt effort and really improve the average speed of your ride.  Just before hitting the steep rises of the gap I stopped for a little snack and a coffee in Kate Kearney’s cottage, a very popular tourist spot in Killarney. 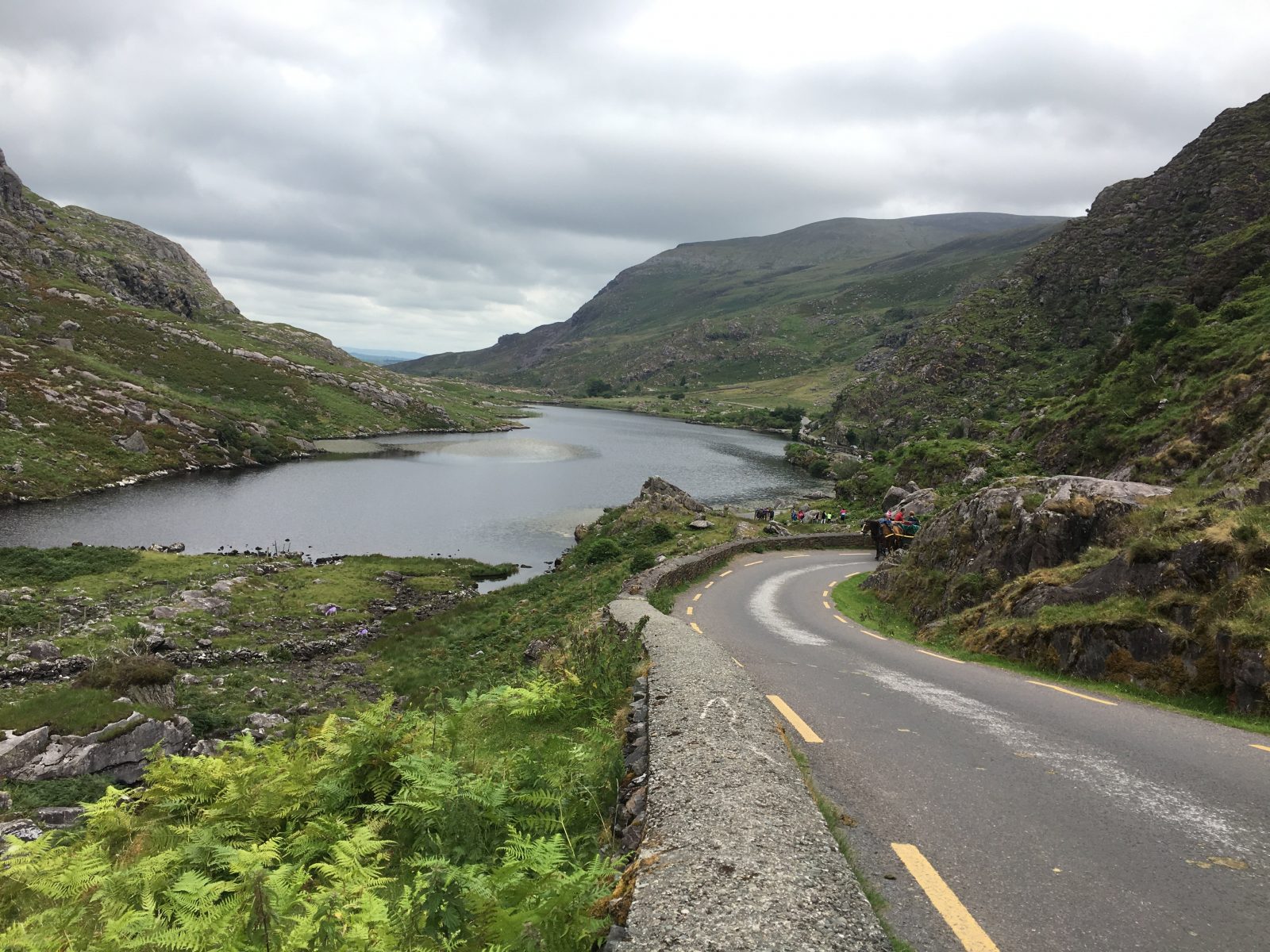 Depending on when one visits Killarney going through the gap could be the an amazing tourist destination or a terrible bane, during my visit I came during high season meaning that there was a very slow traffic jam of walkers, cyclist, cars and jaunting carts stopping to take a photo at every opportunity, so If you would like to come visit here I would recommend coming early spring or late autumn as not to get bogged down by all the slow tourists around here. About half way between Kate Kearney’s and the top of the Gap, in the valley you will find a lot of sheep eating grass and just living life all over the road and these sheep get to see thousands of tourists every week and have become used to seeing people making them very friendly quite unlike most sheep. 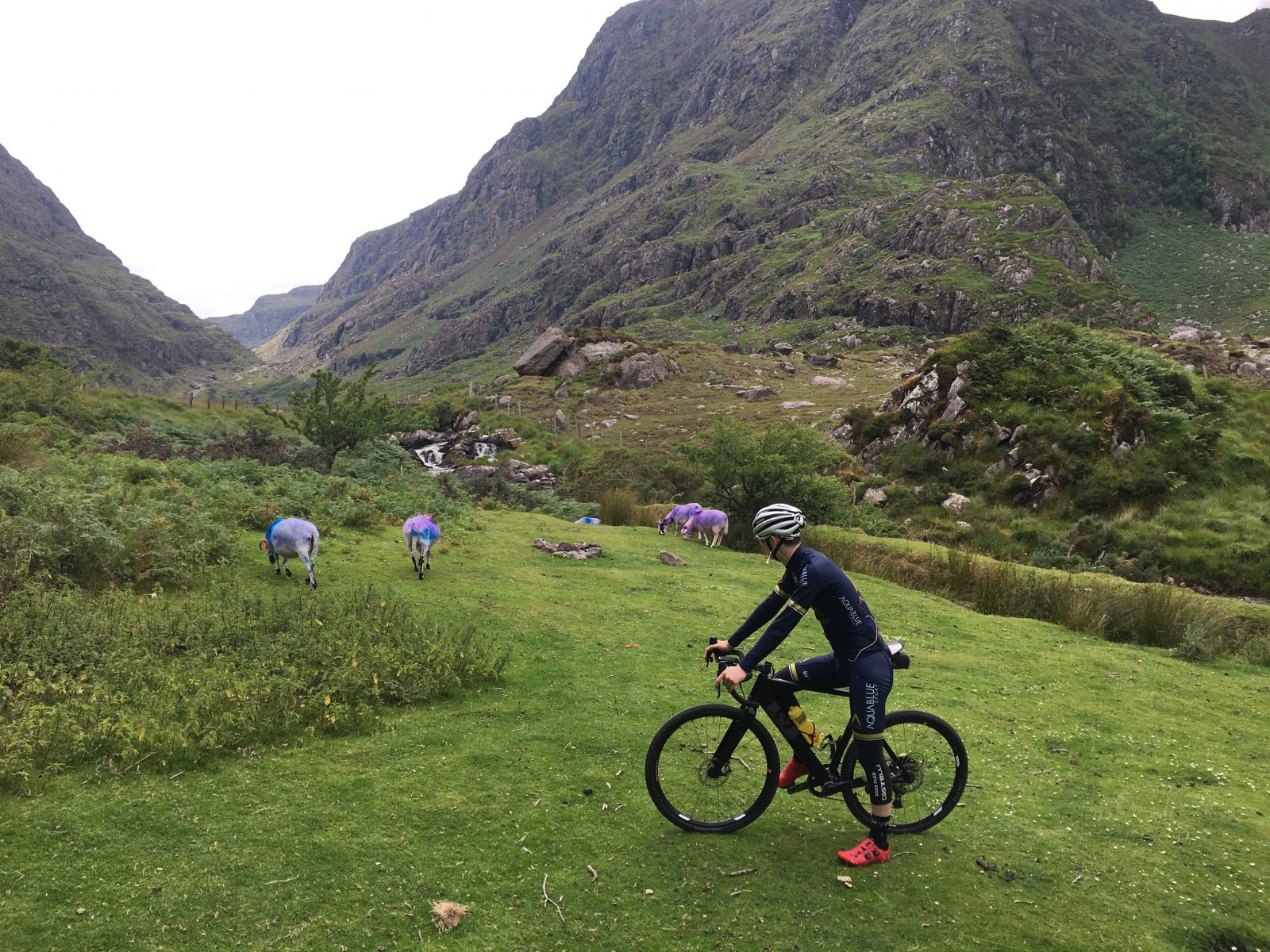 After passing through the gap and just before crossing the divide between the gap and the black valley, the climbing really picks up, the gradient hits 14% quite often and maxes out at 20% but it is quite short and with the right gears is not impossible. After I battled my way to the very top of the climb I made sure to have a stop for a chance to take in the famous views of Killarney. 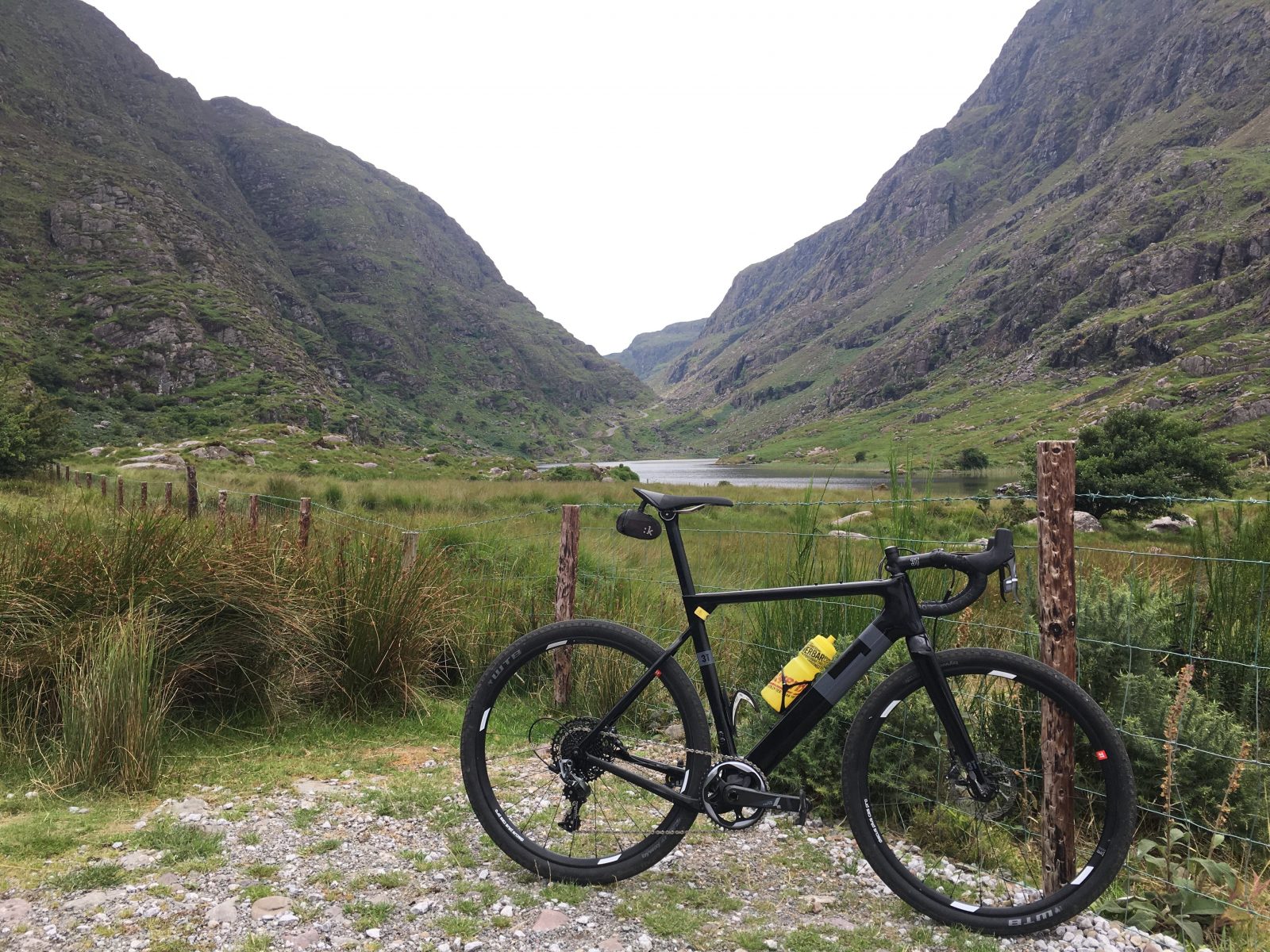 After reaching the highest point of the gap there is a well-deserved flowing descent of hairpins and some scary blind corners, once making it to the bottom of the descent there I came across the most stereotypical Irish area one will ever see, old rough roads, weathered and old houses few and far between the whole way to the top of Molls Gap. 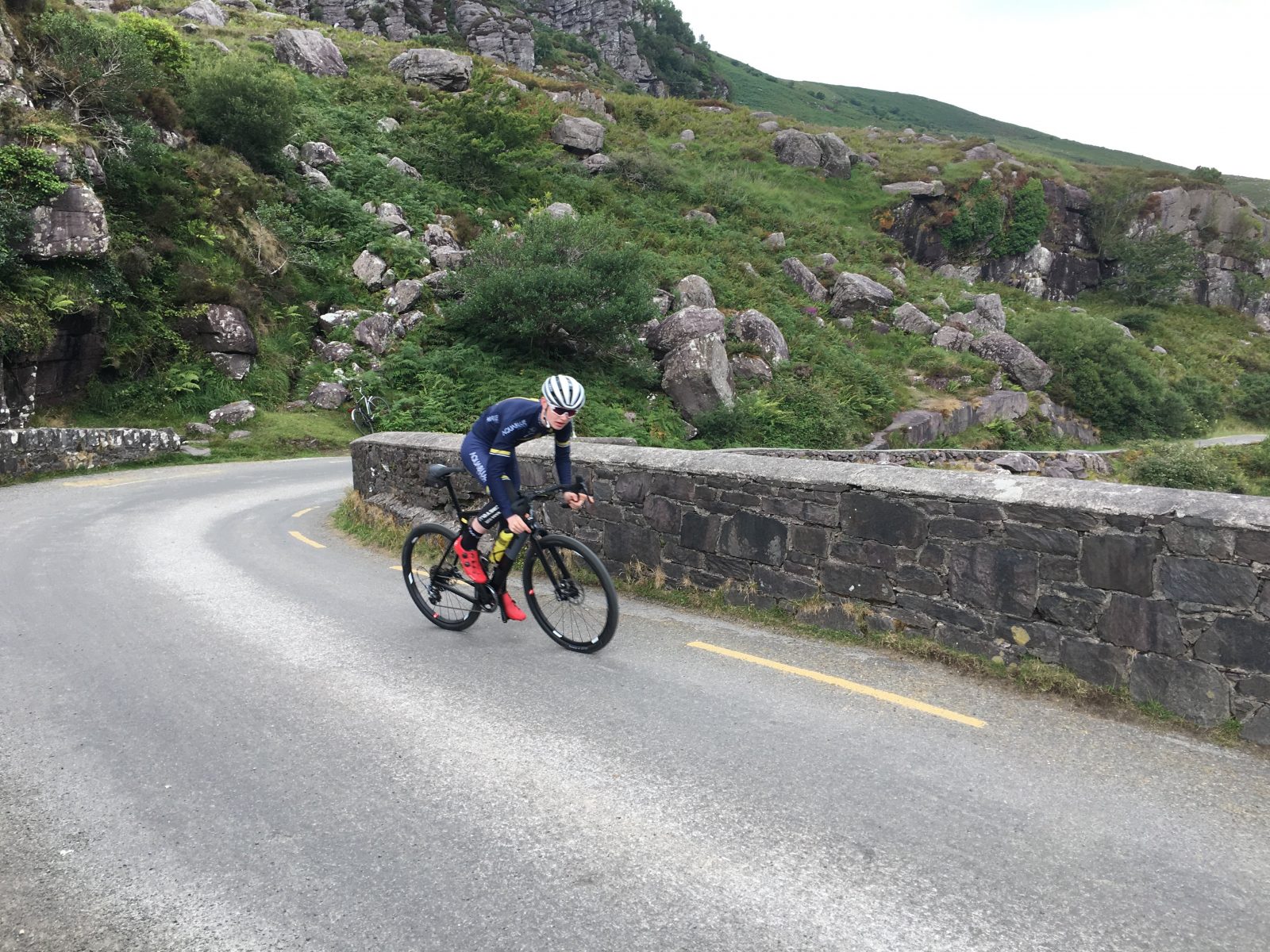 At the top of Moll’s Gap is where one would find a large café and souvenir shop called Avoca, a very popular place for cyclists to stop after climbing molls as the have some very delicious confectionary and dinners too, though I was heading for Killarney so there was no point for me to stop there today. From the top of Molls Gap to Killarney it is almost exactly 30km and 8kms of that are downhill (though its quite a slow descent because its not very steep and there is a bit of a headwind a good bit of the time). 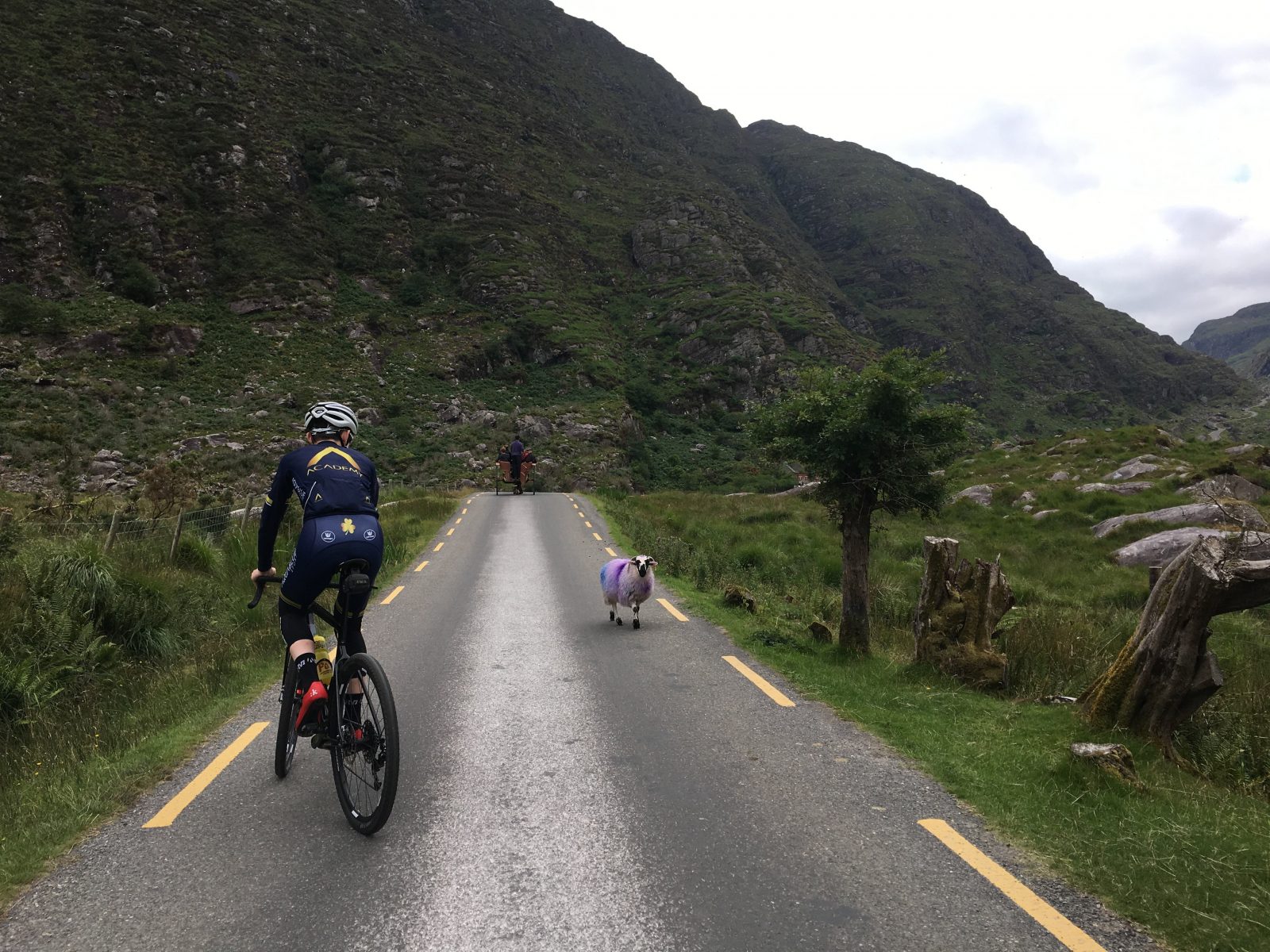 Halfway down the climb there is another little café with a viewing point of the lakes of Killarney across the road called “Ladies View” named after queen Victoria form her visit there in the 19thcentuary. 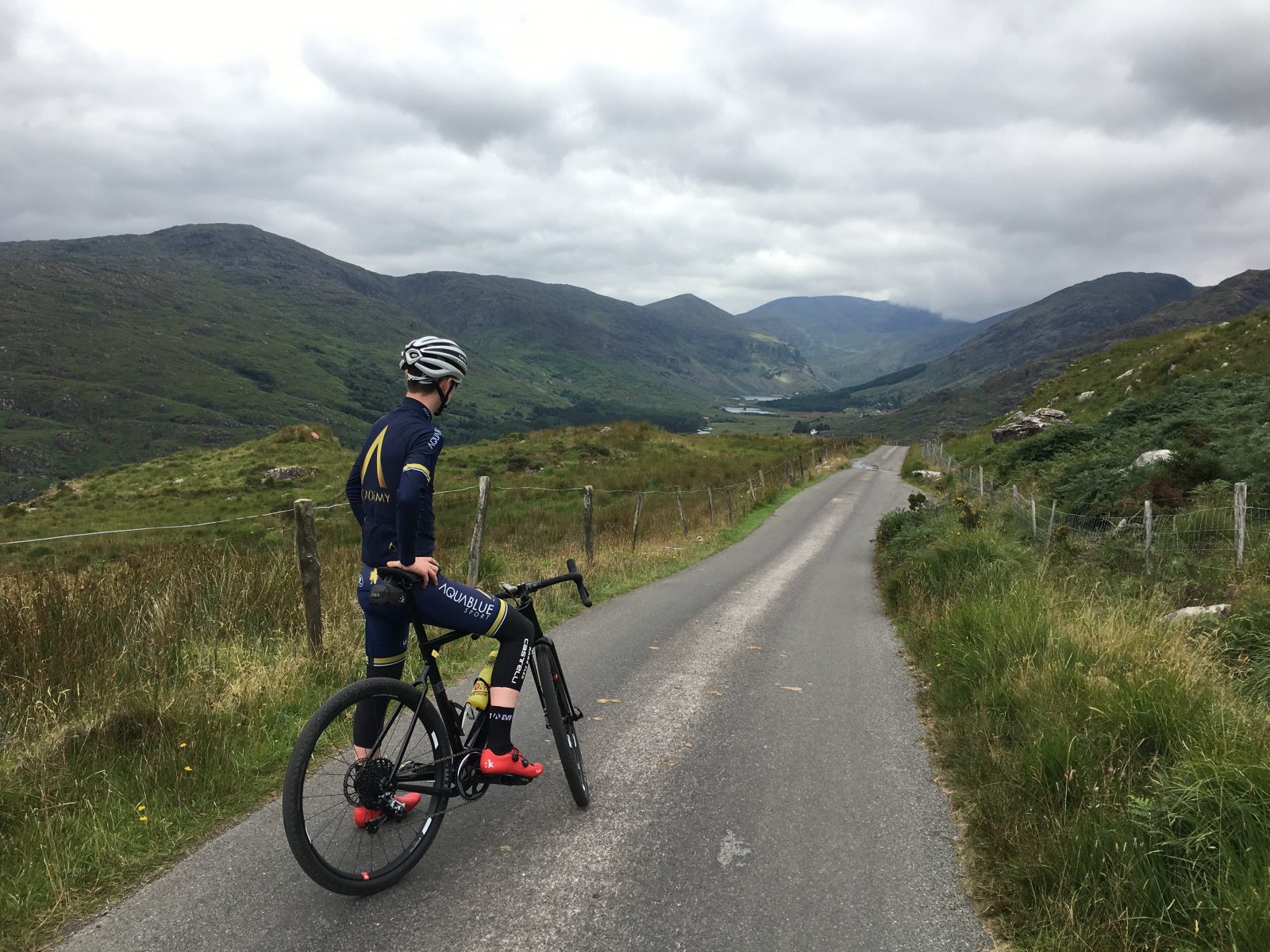 My home is roughly 3km from the bottom of the descent giving me a good chance to think about the day I had just fought my way around. 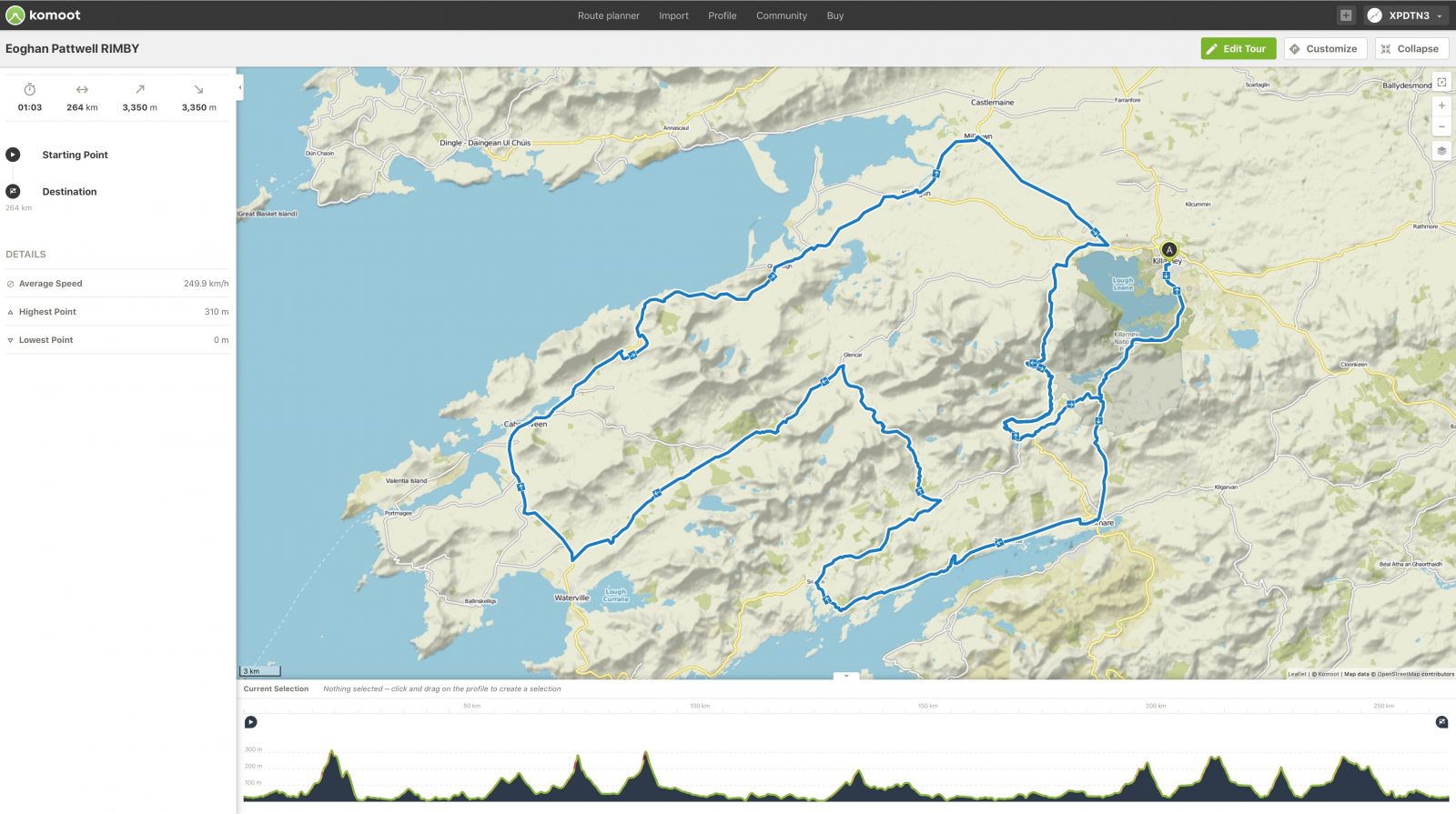 ◄ Previous Story Get ready to RIMBY!
Next Story ► GET CREATIVE – ARD KESSELS AT KOGEL
...