After the cool paint job on Larry Warbasse’s  EXPLORO last month, we continue on the “Get Creative” series, this time with an amazing and work-intensive example of what you can achieve on a RTP frame when there is no creativity limits. Let’s Ryan at VELOVAS walk us through the process:
After being informed I would be painting 3T Exploro RTP frame along with having the opportunity to paint it however I wanted I decided to collaborate with Mike (@pfaltzgraphic), in my opinion one of the top designers in the industry. 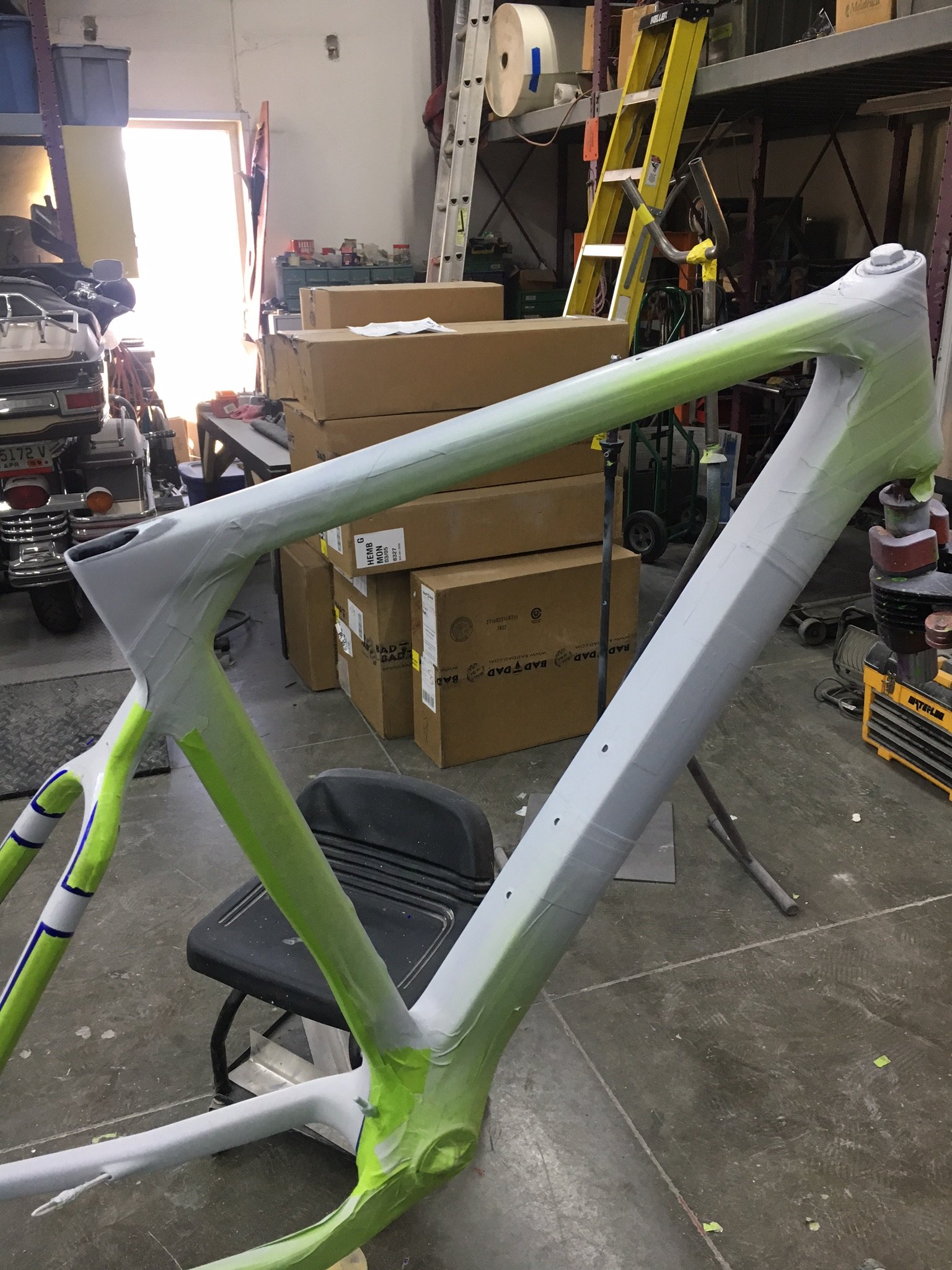 The concept would be to truly show that you can do as much or as little as you want on RTP frame, so creating a 50/50 paint scheme that represents party on one side and all business on the other. 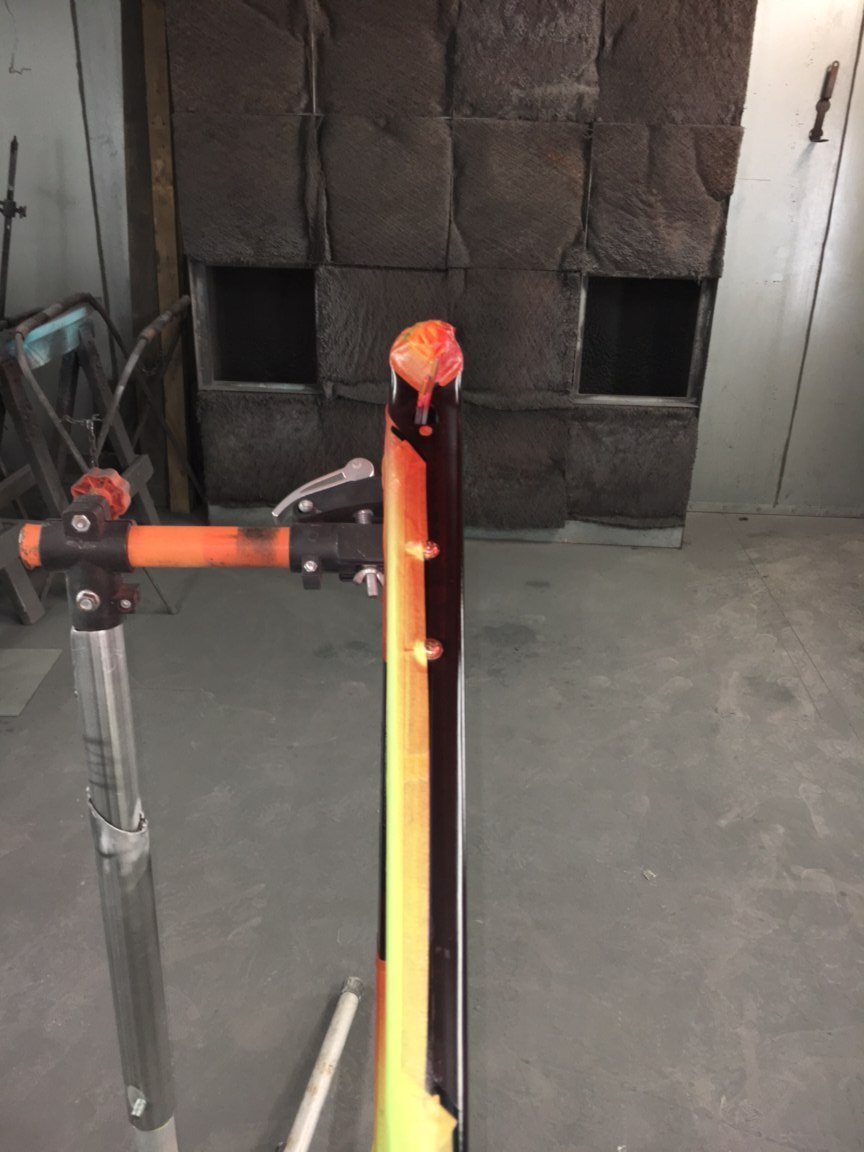 With Party side being a gloss finish with a 1980’s influenced splatter effect, and several fades, but all having a purpose working from the front to the back, with the base being transparent candy red and candy green over the carbon for a wet loli pop effect that is best seen in the sun. The alternate side being a simple but clean off white with Matte/Flat clearcoat finish. 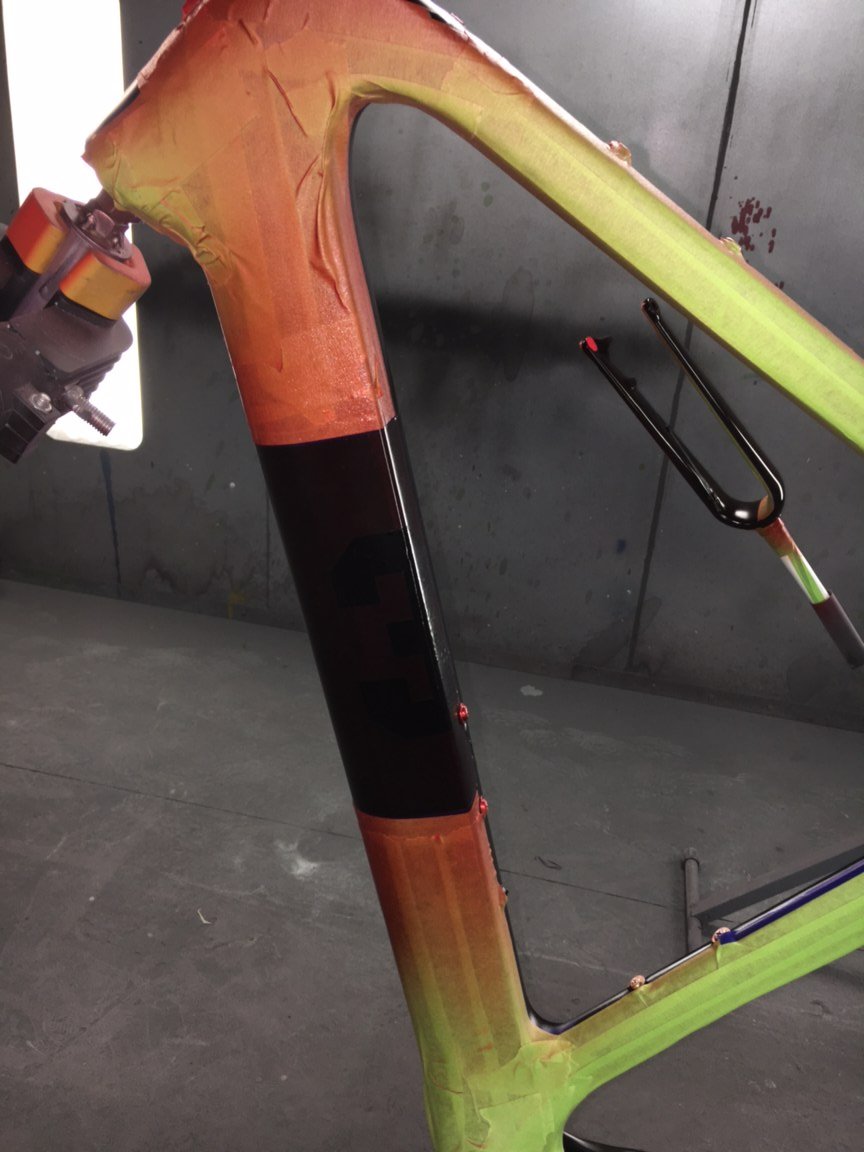 This was definitely one of the hardest paint jobs that I have done to date. With the bike being half and half it truly had to be finished twice, meaning it had to be finished completely in gloss, then masked to do the white and matte finish. 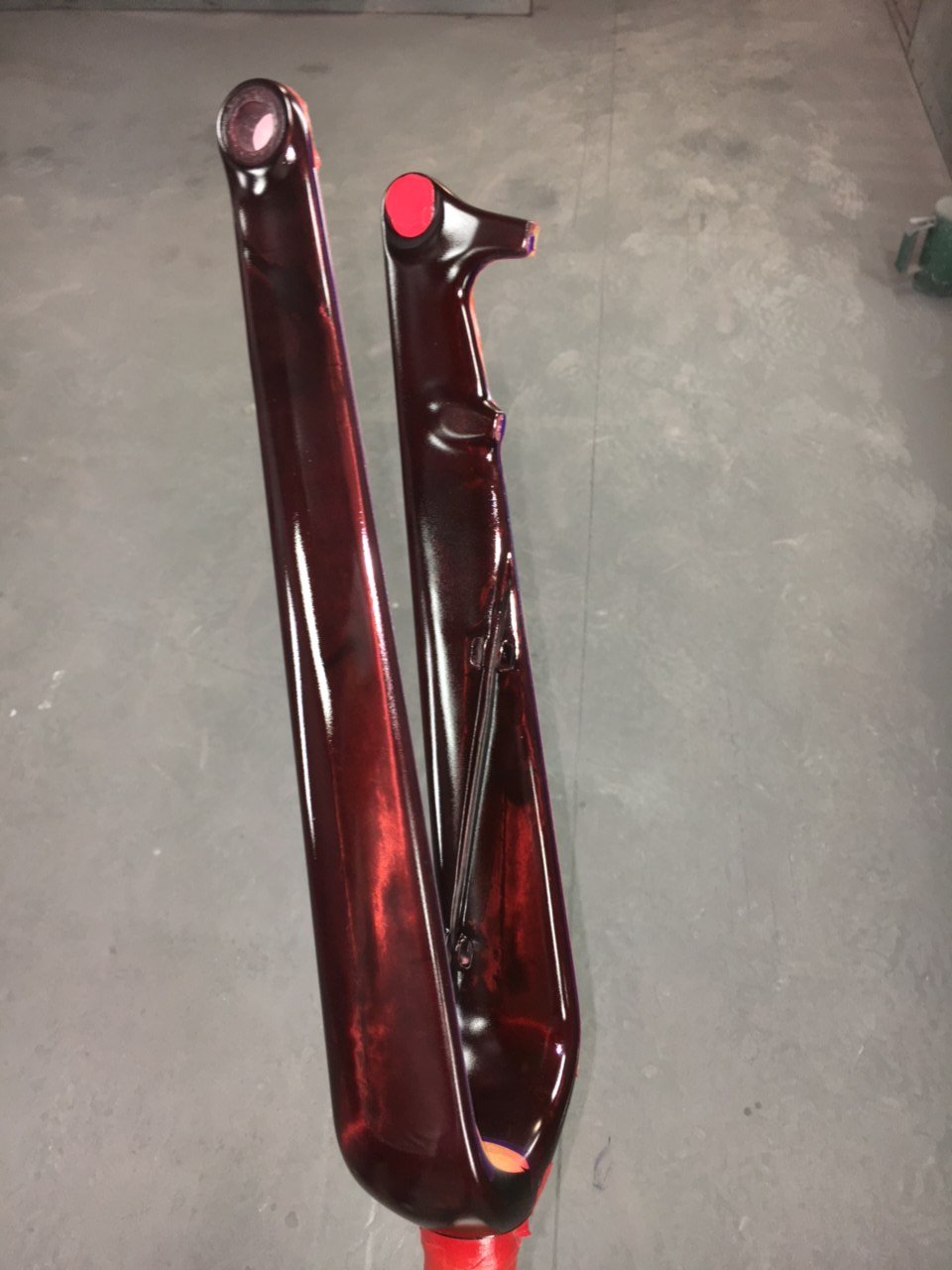 The challenges included maintaining clean lines throughout while having only one shot!  75% of the bike was done in water based paint making it far more difficult but keeping it as environmentally friendly as possible. As far as design concept it seems simple, but figuring out the transitions was far from that but couldn’t have been done any better in my opinion. 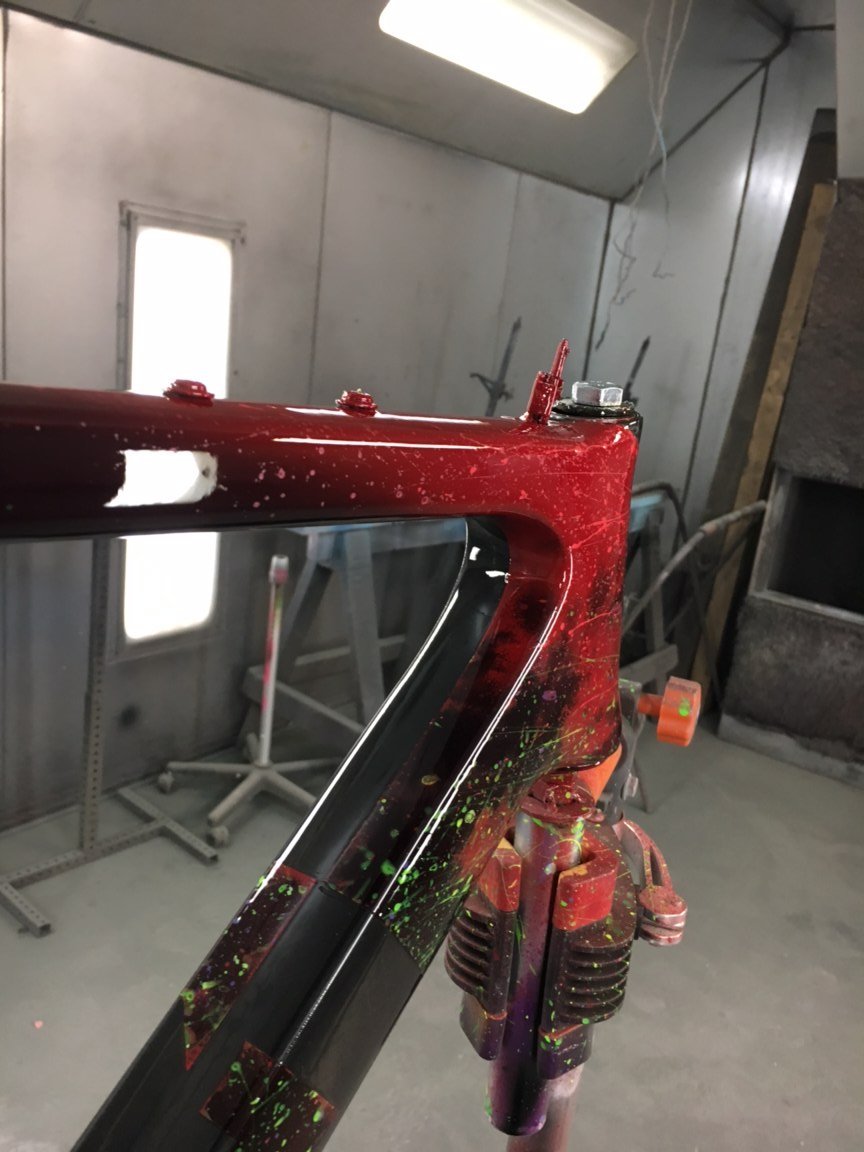 It was also very important to me that it was not just random splatter but that it all had flow to it, working with over 10 different colors, while also making sure you could not see the texture of the splatter in the end product. 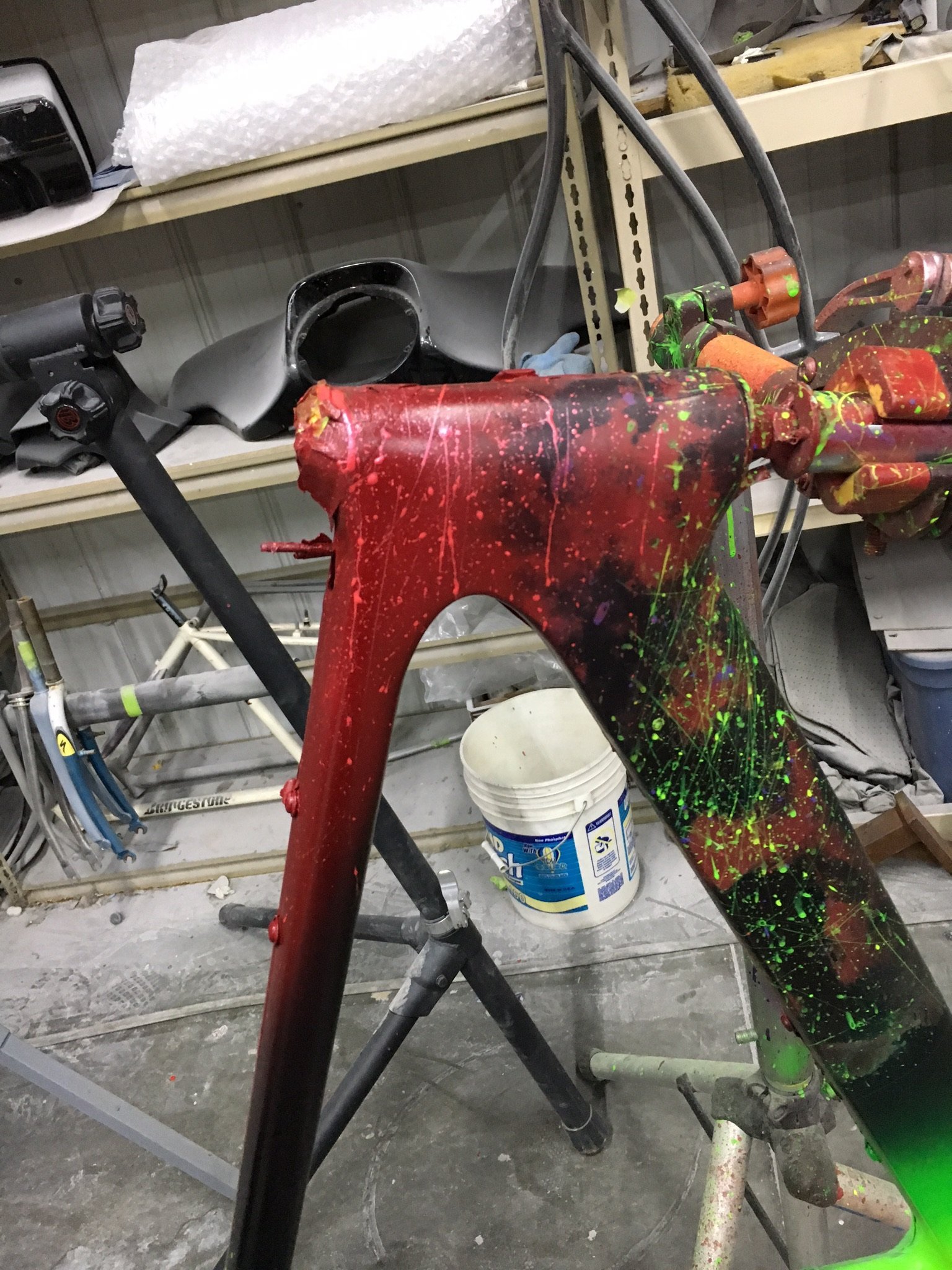 Mike and I worked together with him being in Pittsburg and me being in Wisconsin to collaborate to create a truly custom paint job that was clean and classy yet loud and explosive. In the end we are extremely happy and proud of our end product! 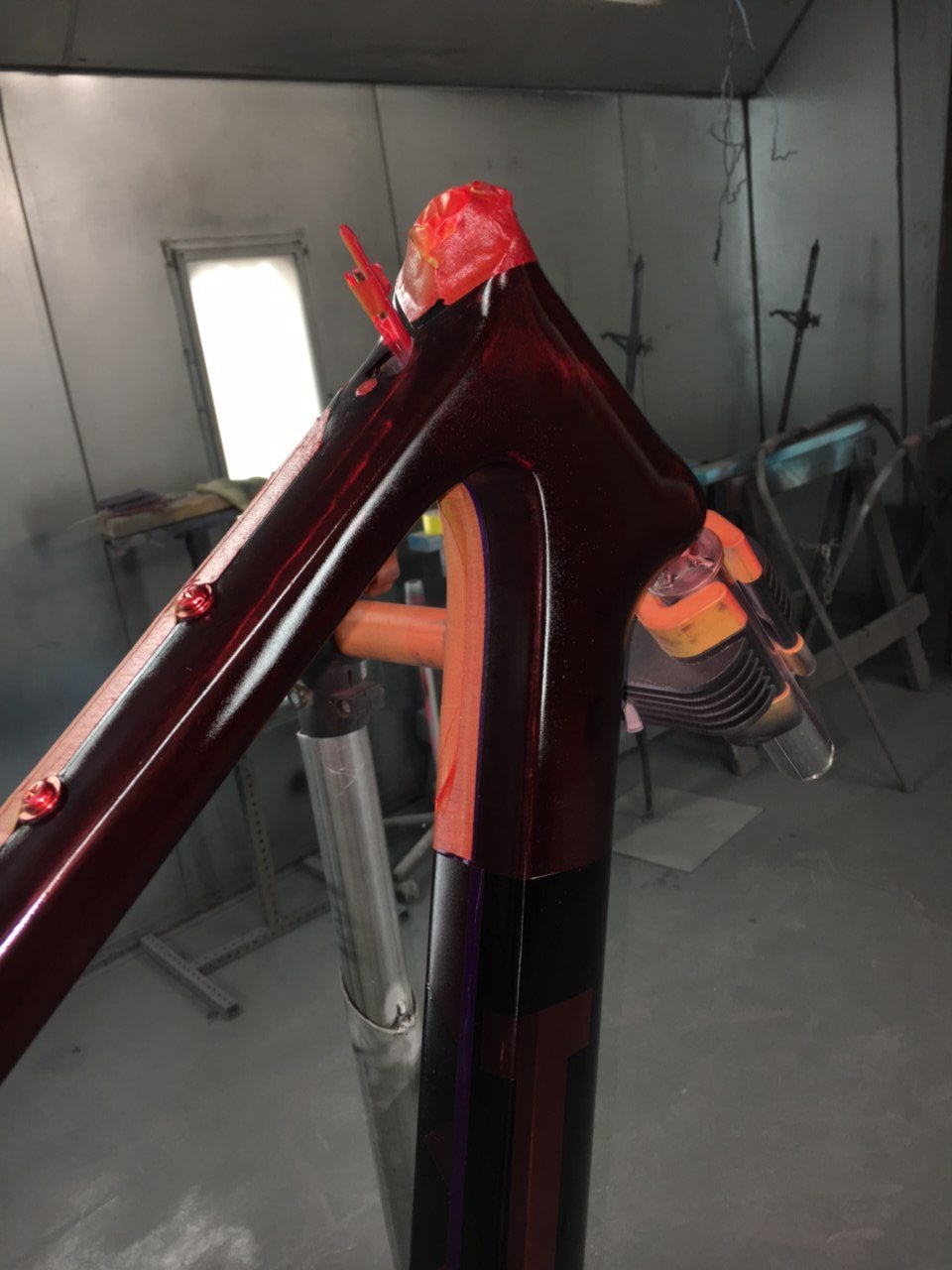 On our previous Get Creative blog, we showed you how Ryan at VELOVAS worked hard to add all the layers and colors required to get to the final frame vision of his “Party & Business” design by Mike at @pfaltzgraphic

Some readers commented the paint was “too much for them”, but that was exactly the goal… and they didn’t see how Ryan envisioned the final result, way more subtle and elegant that what the first steps of the process showed…. 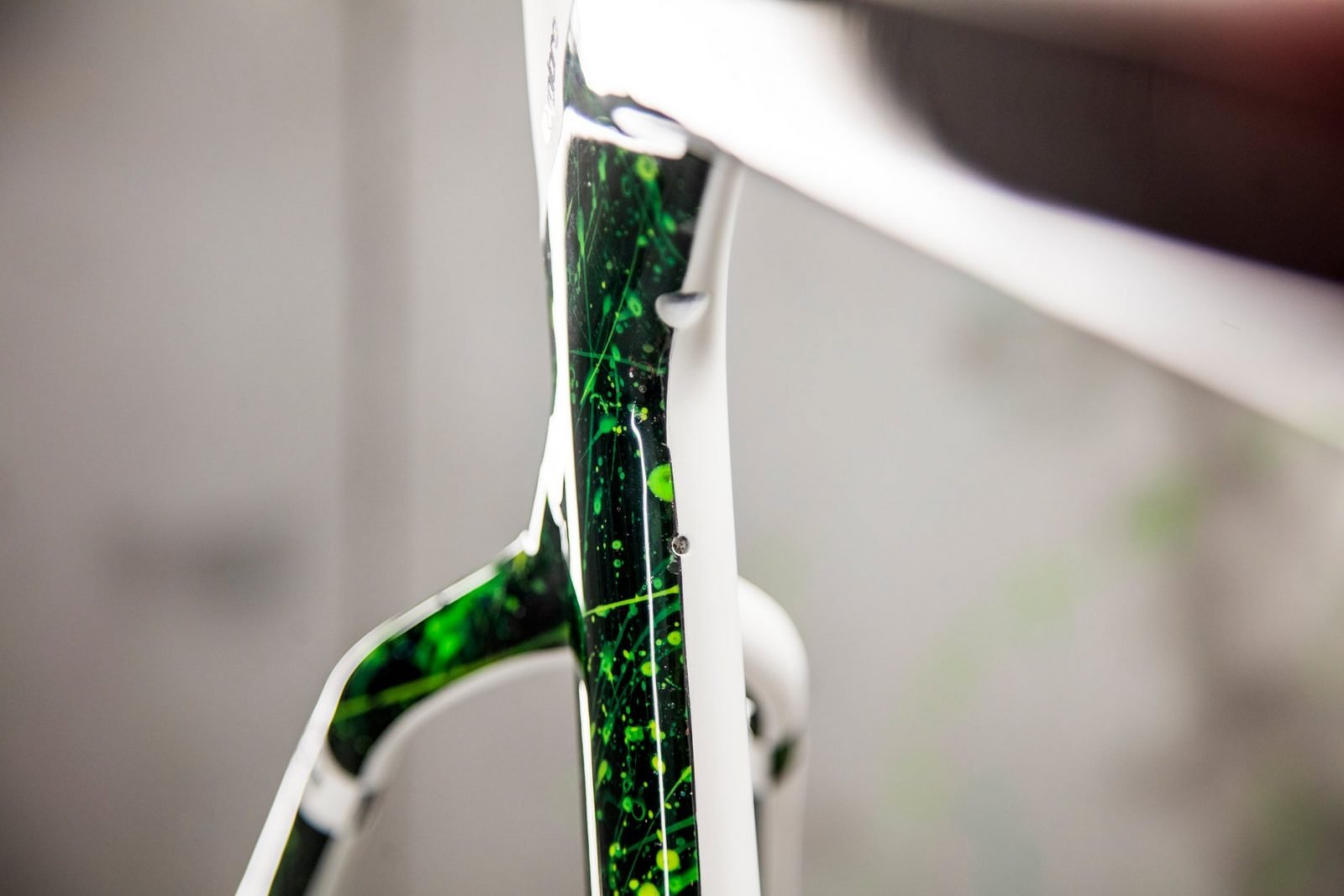 According to Ryan , “the whole thing was really supposed to represent what the RTP program is, and that you can do as little or as much as you want because all of the power is in the customers hands! It’s meant to represent that the power is in your hands to make your bike exactly the way you want it.”

Talking about the challenges of that kind of finish, Ryan  told us “it’s a dual finish bike, meaning that it is glass clear on one side and matte clear on the other side. And that was one of the most challenging things where the bike literally had to be finished twice, and for that final way you only have one chance…and there’s a whole lot of places that mistakes could’ve been made. Along with white being one of the most challenging colors to paint and keep clean. One little mistake would mean having to redo the whole bike because like I said, you literally only have one shot…” 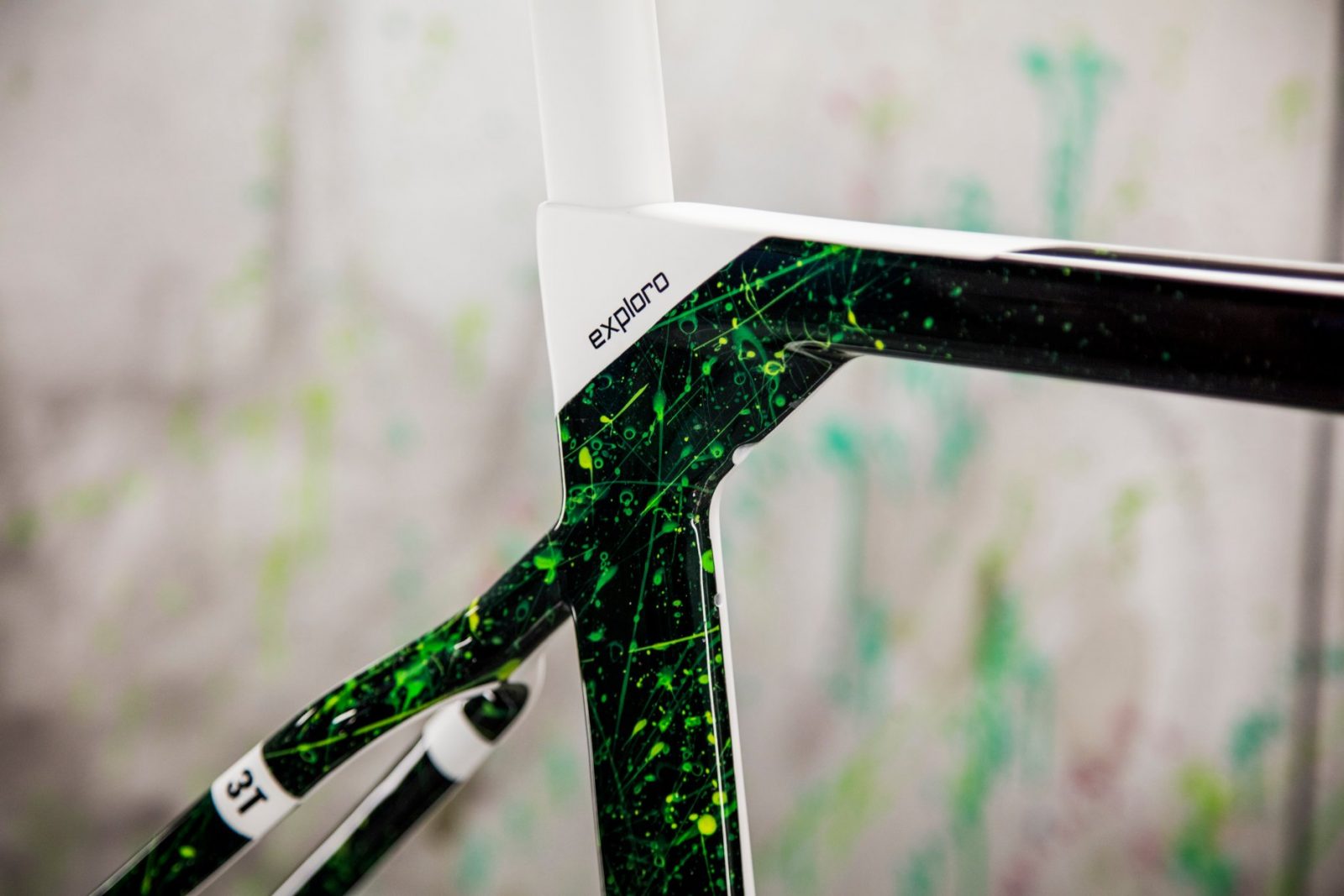 Check it out on the photo gallery slideshow below and let us know what you think!

This Exploro PM (post mount) frame (size LARGE) is now be available for sale as a Limited Edition of 1 unit, for 3.400 euro/dollars, so act quick if you want to take it home.

Free shipping worldwide
Import duties paid if you live in NA (US & Canada), Europe and Australia, other countries import and other duties need to be covered by the buyer. 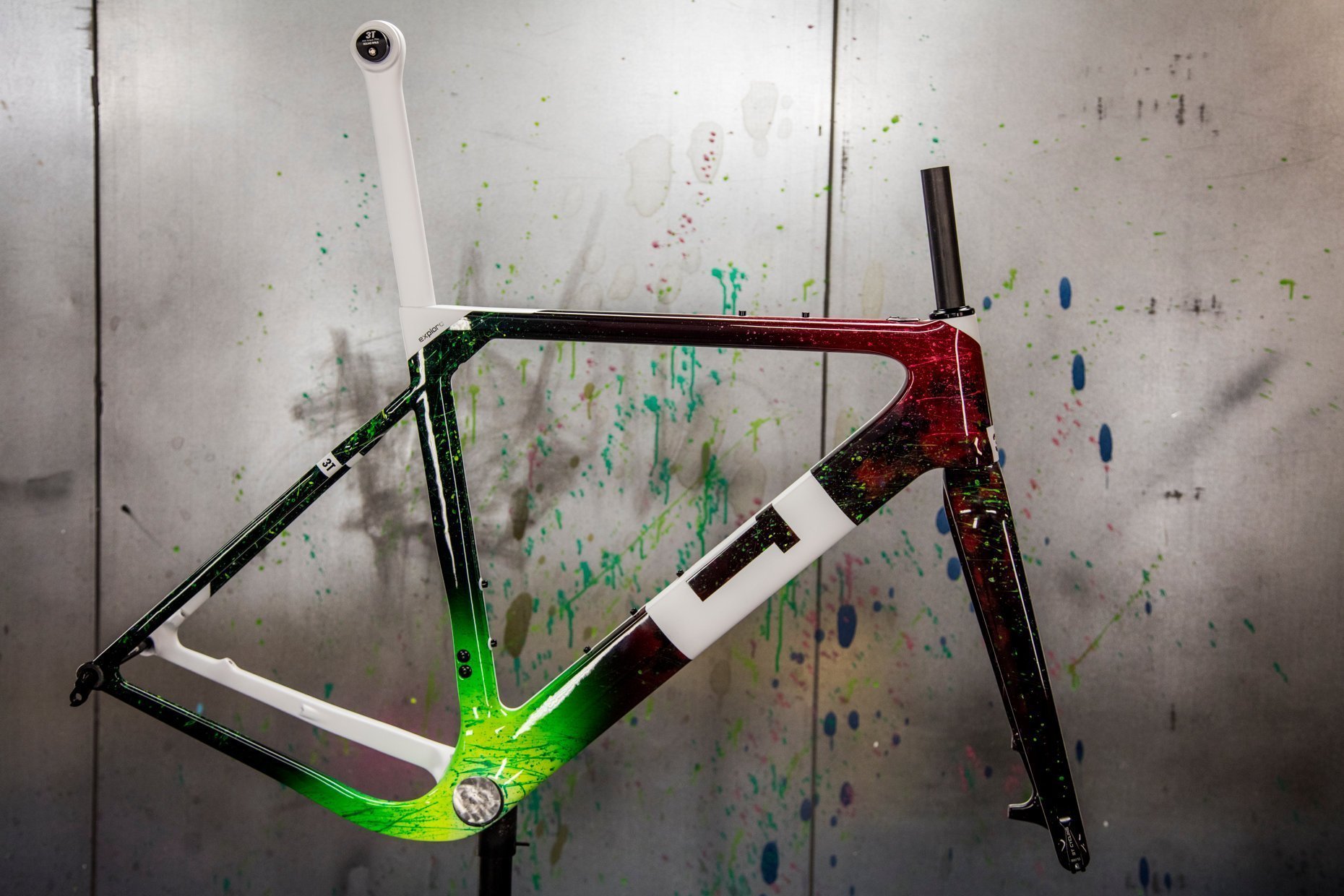 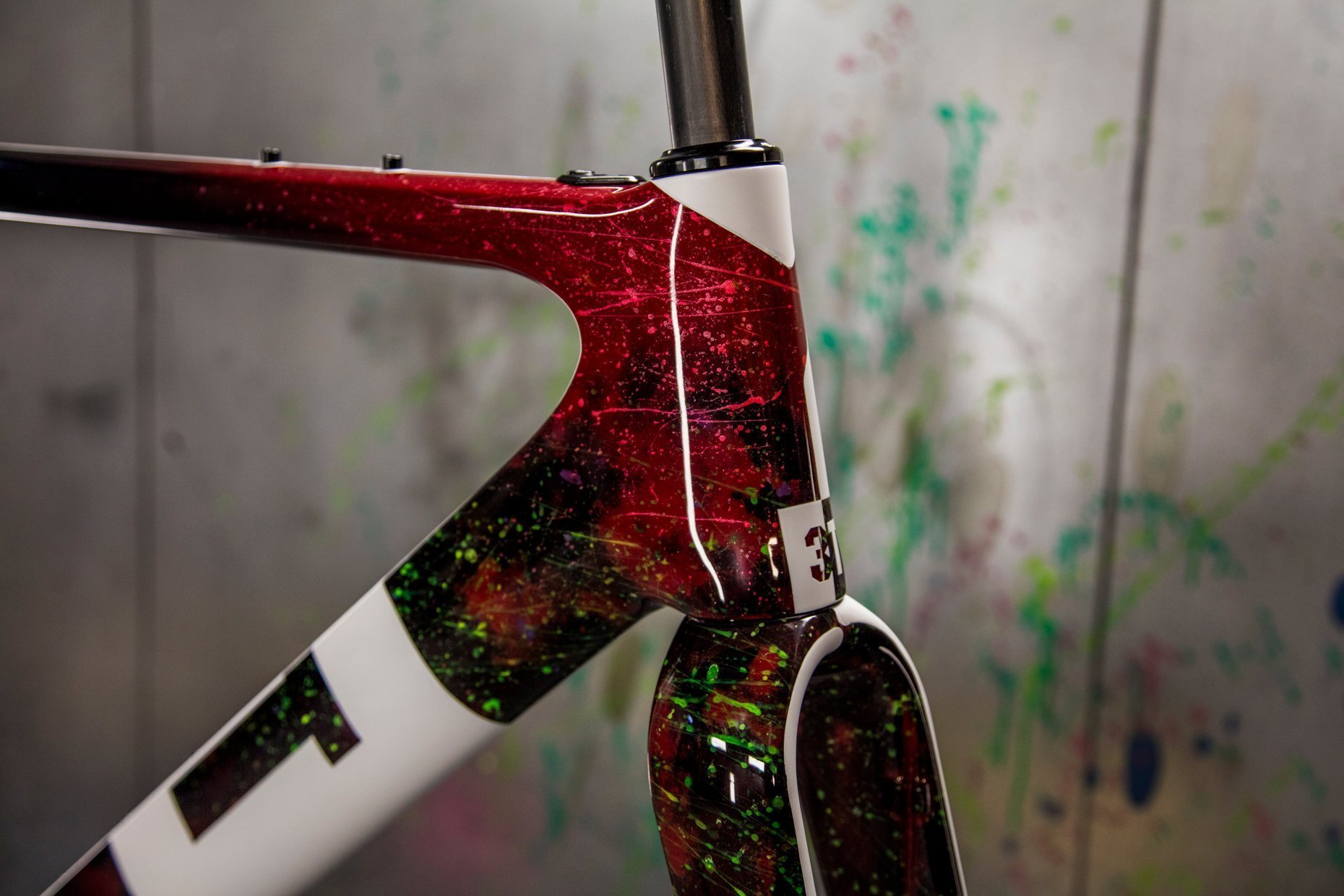 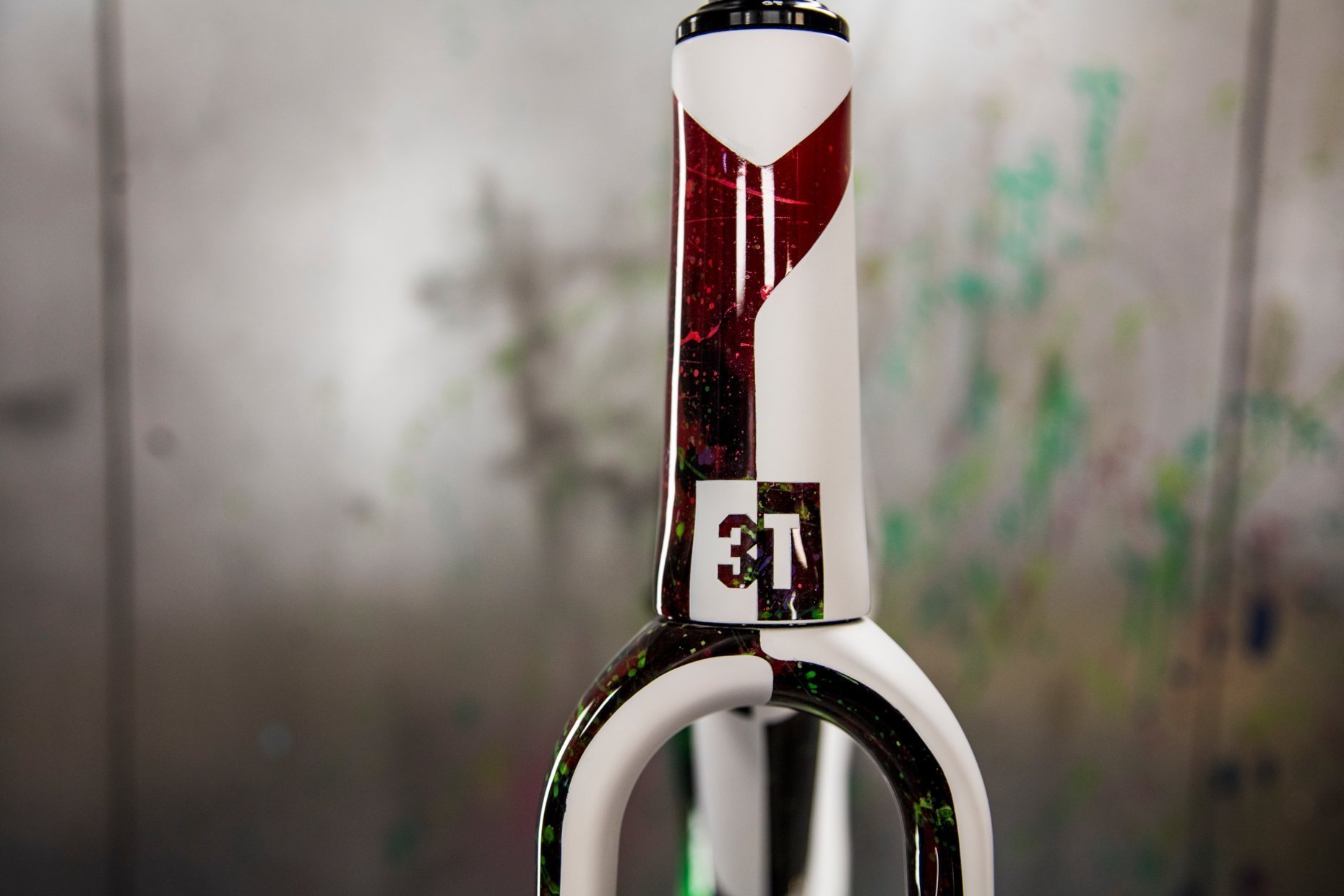 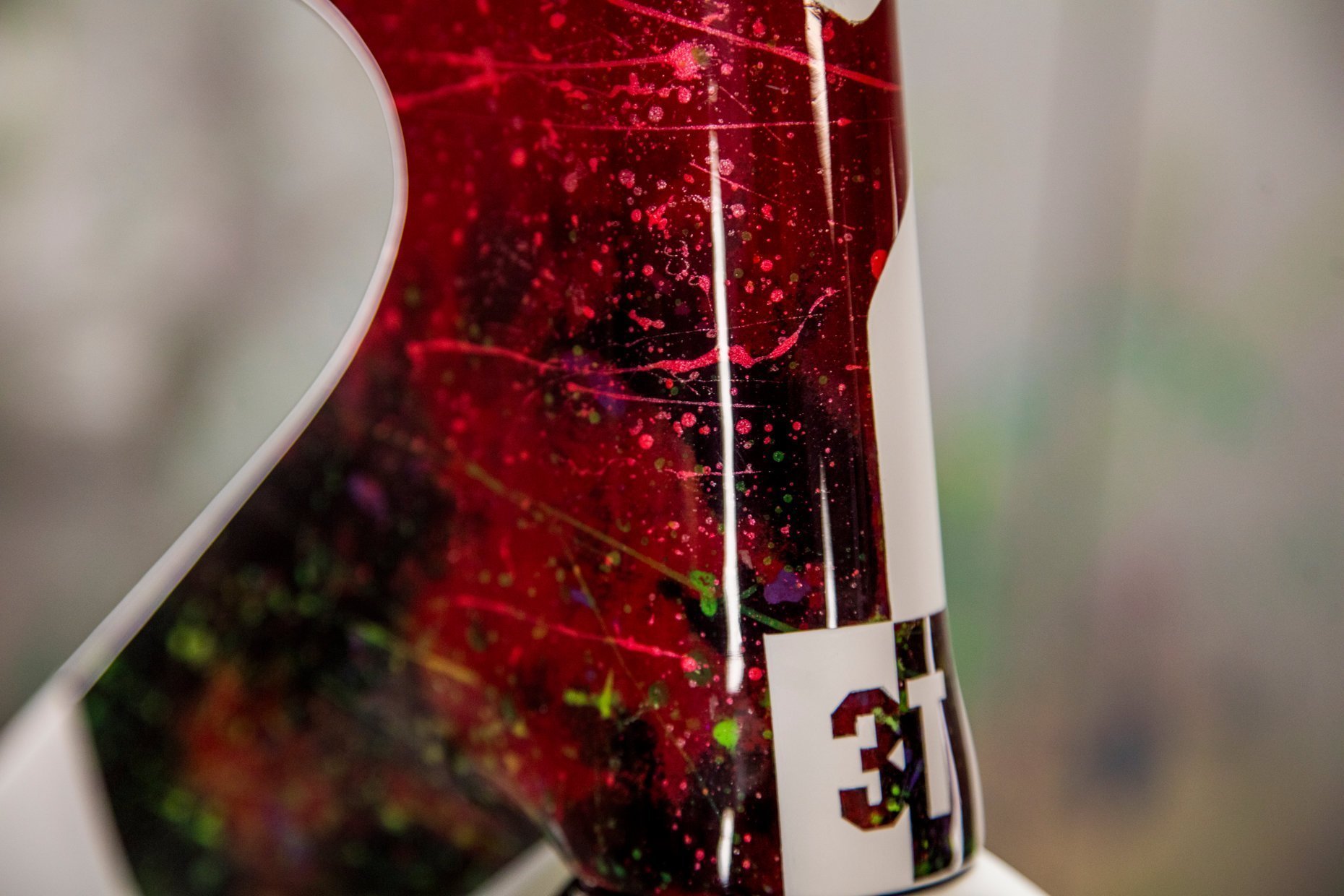 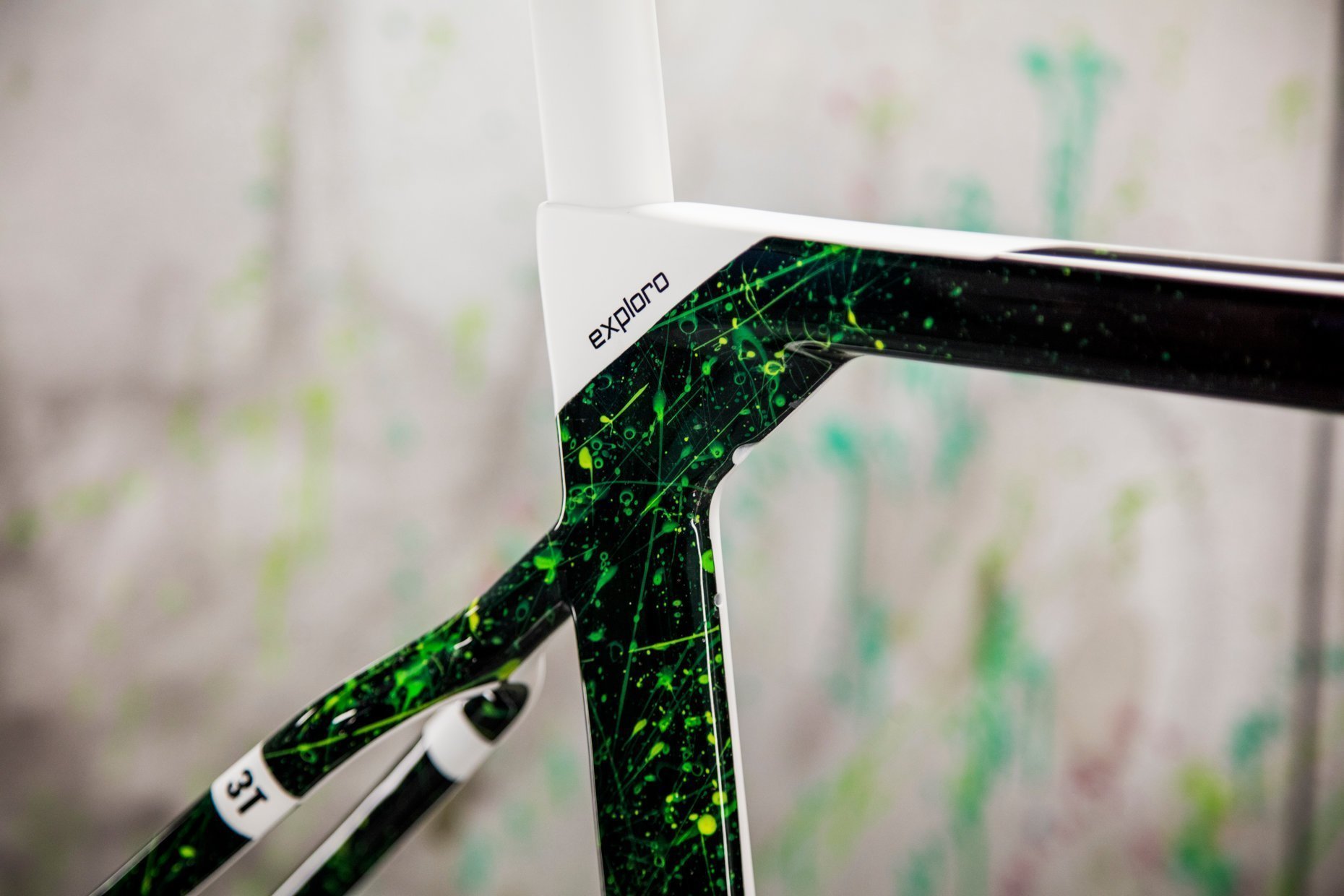 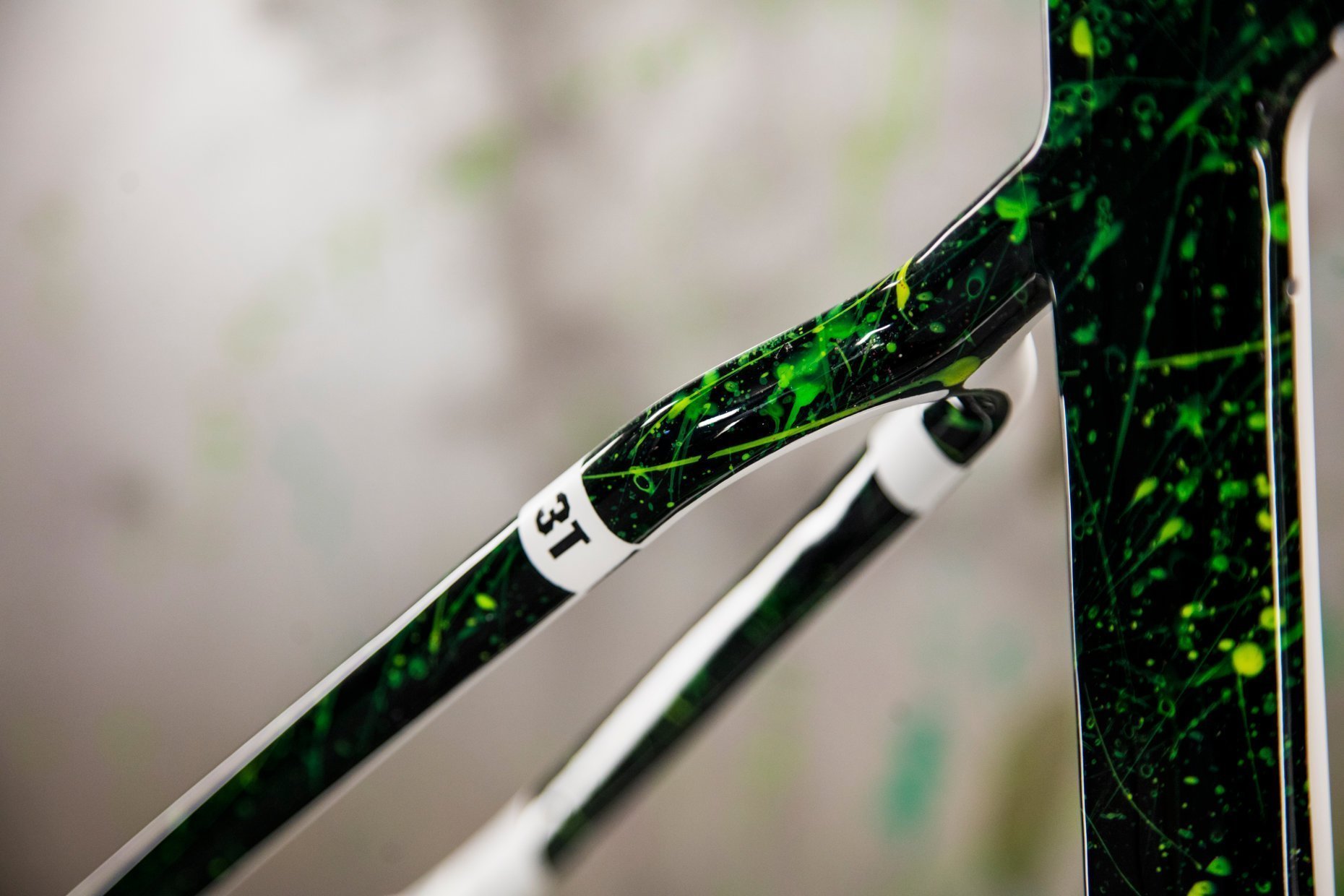 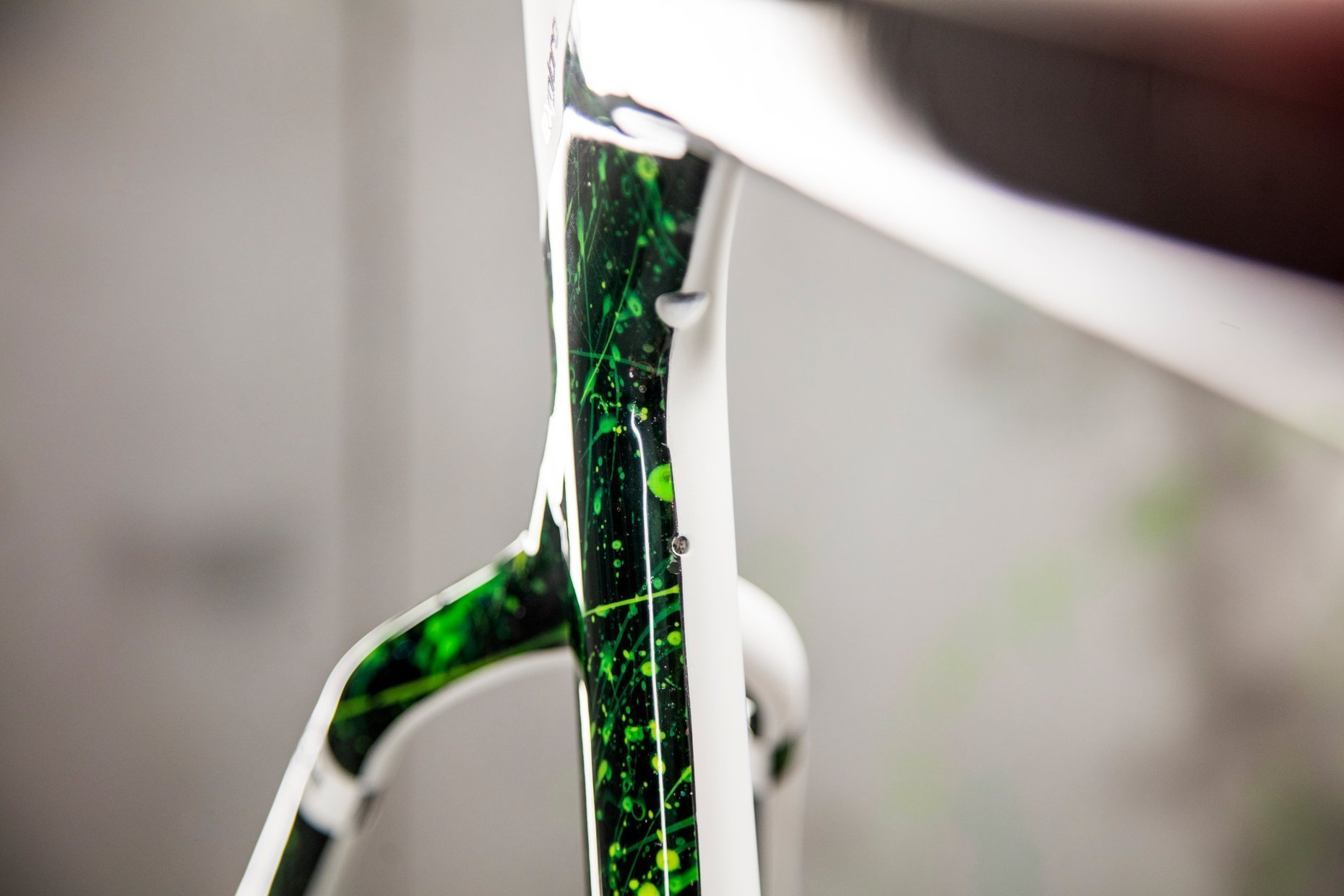 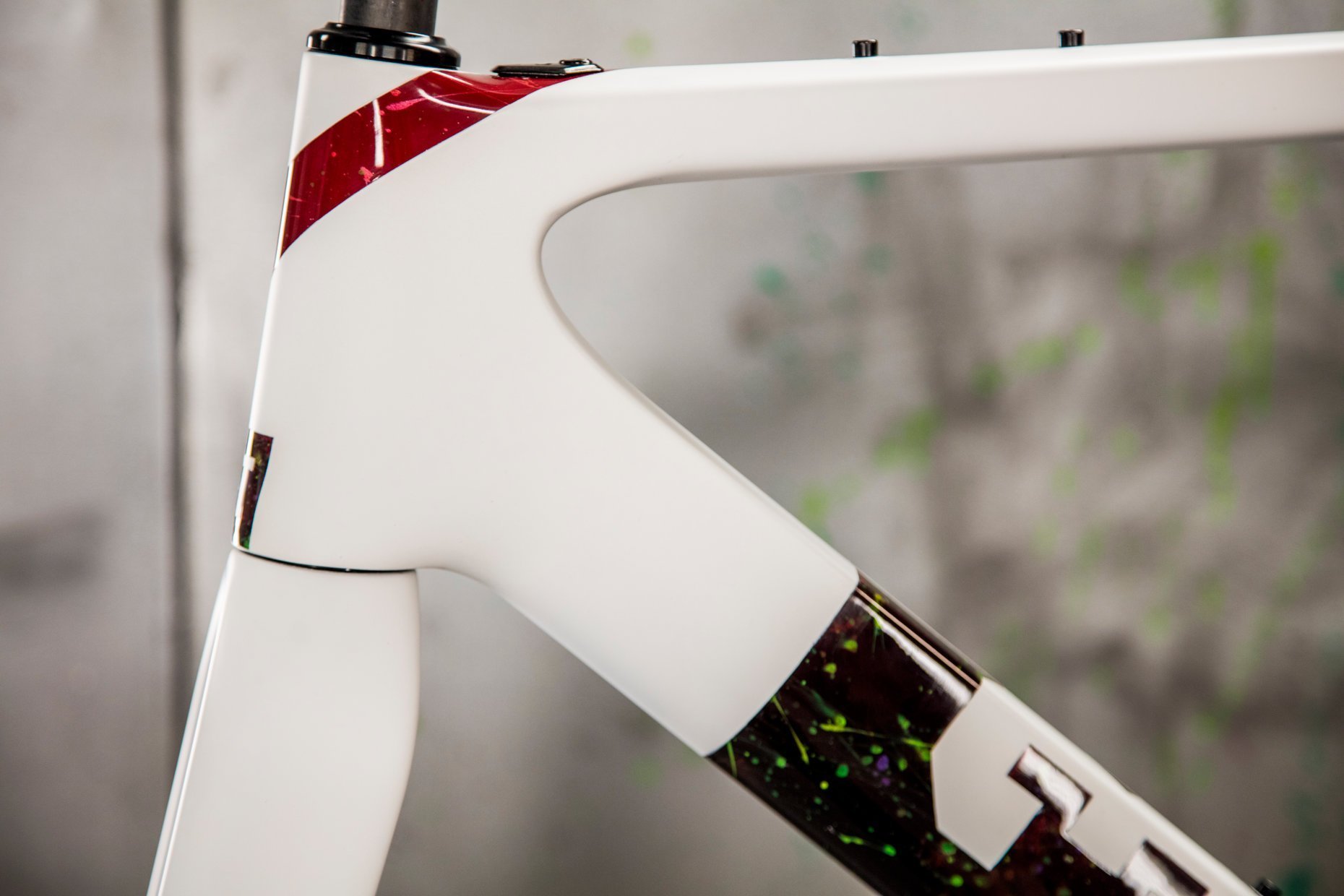 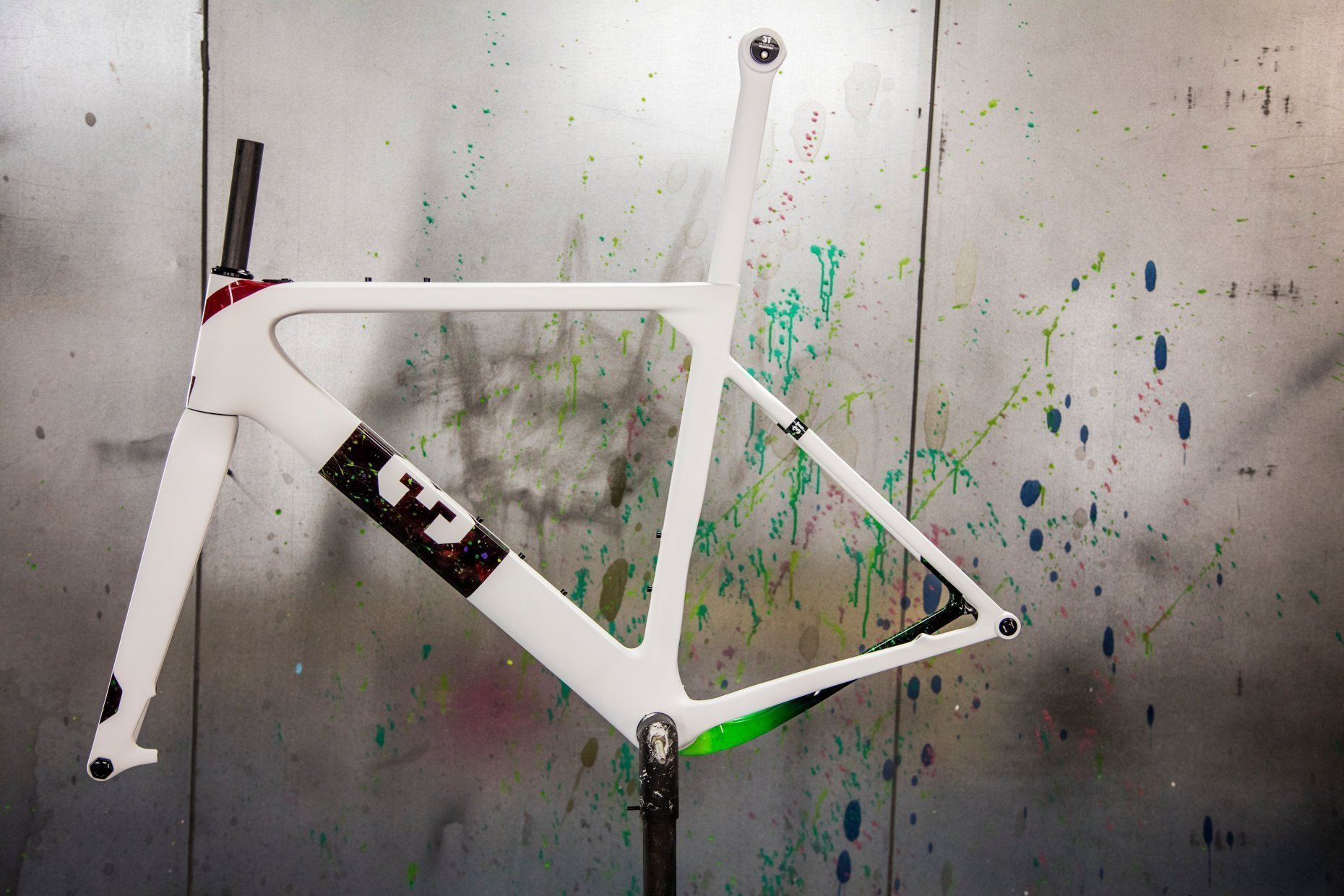 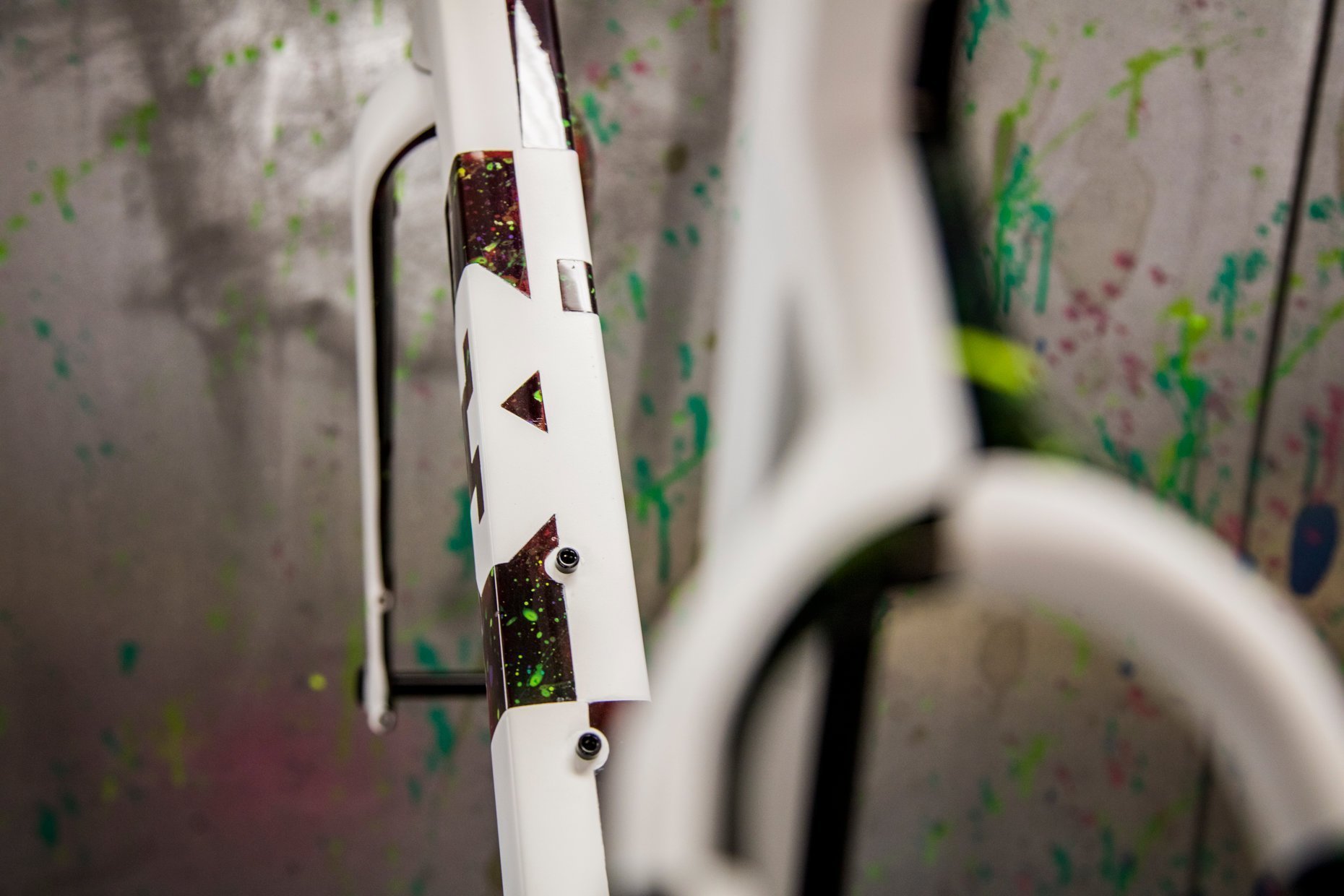 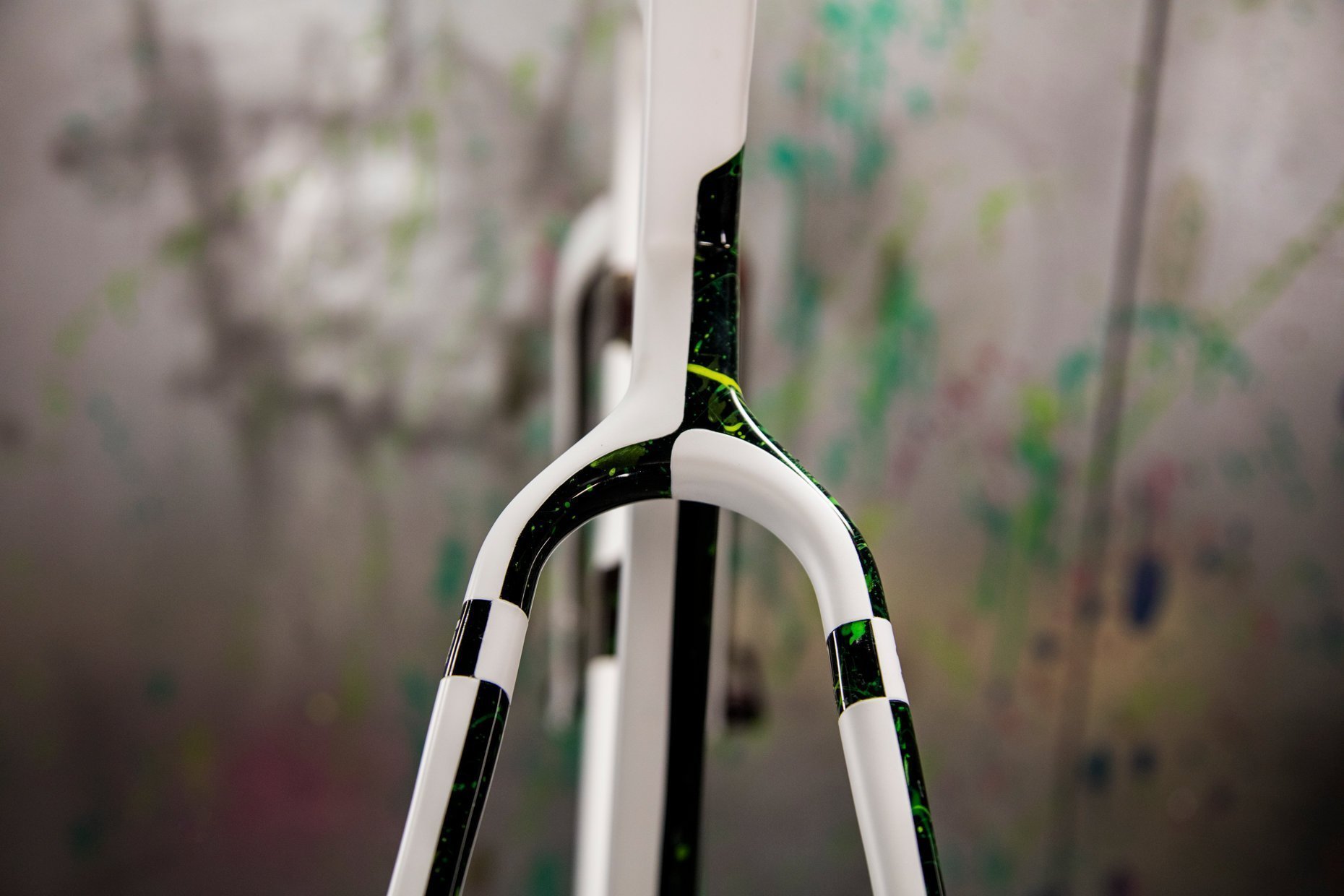 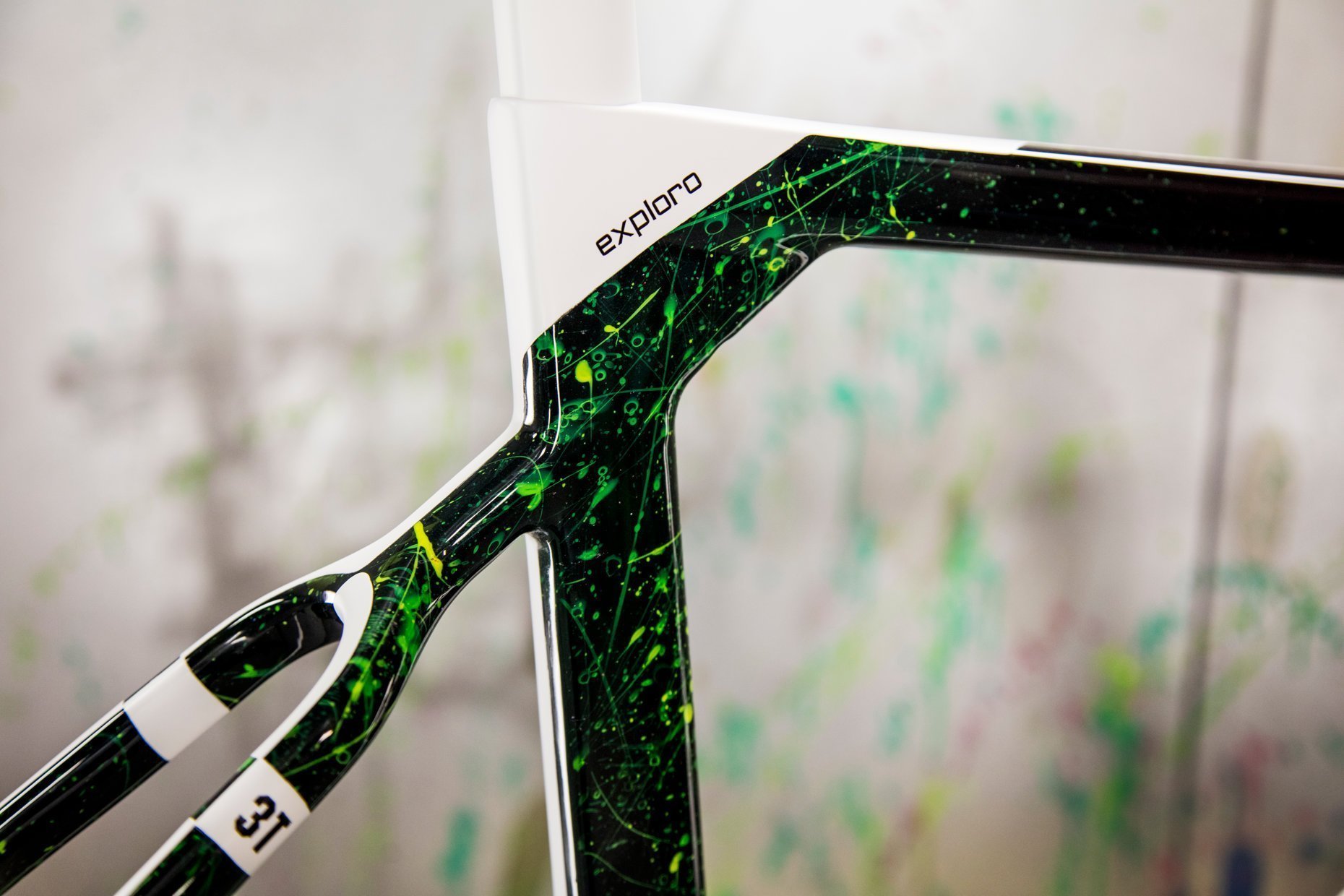 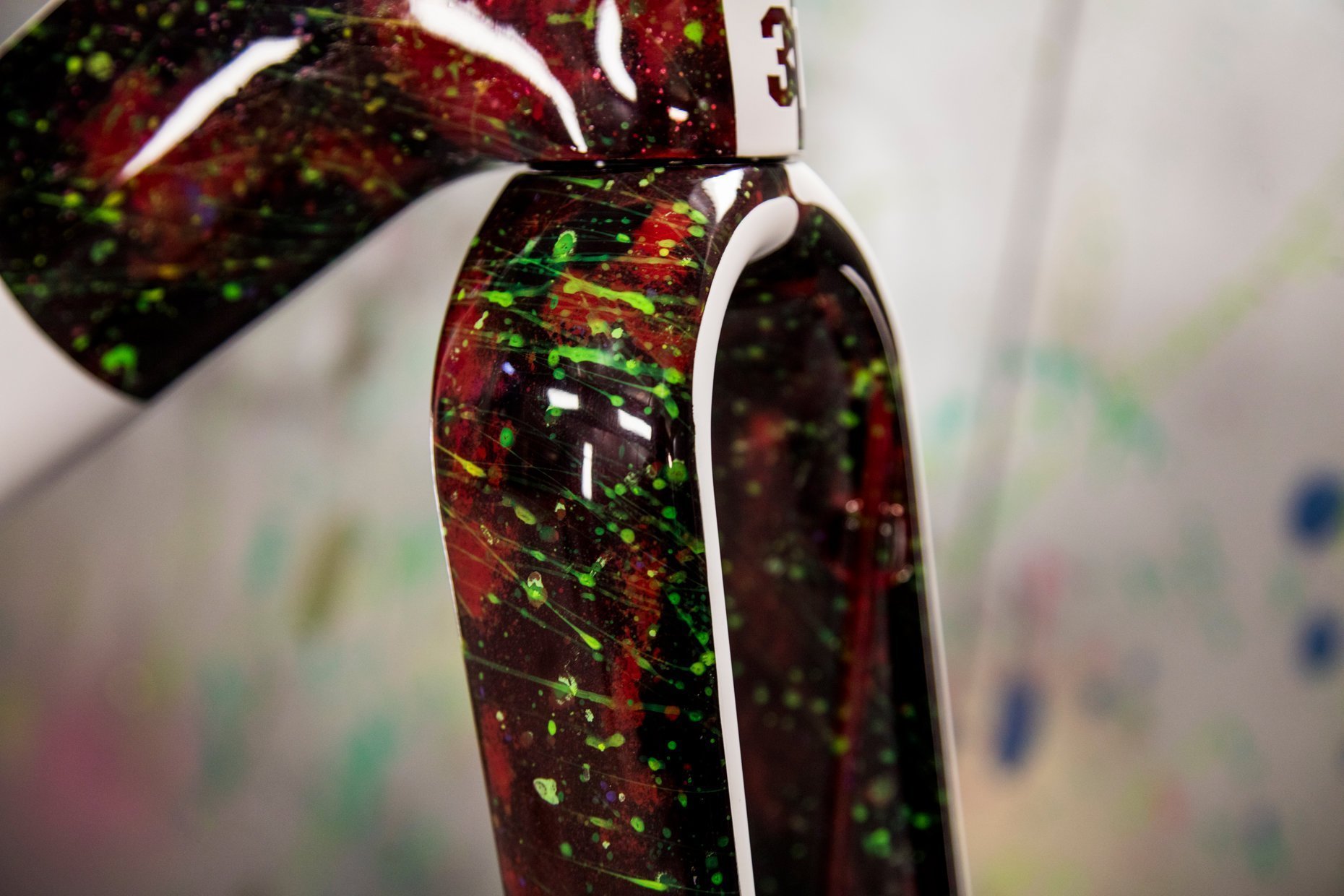 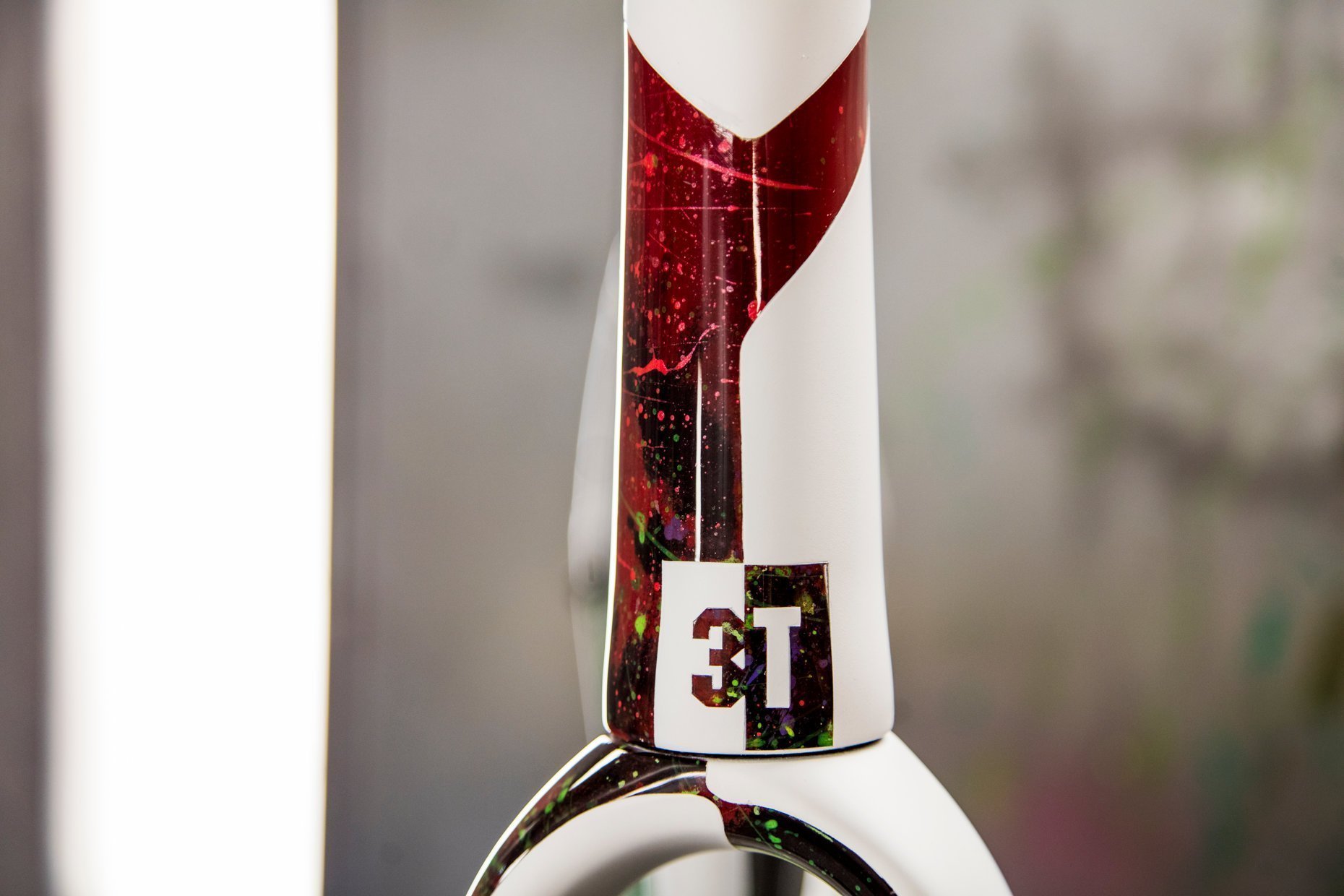 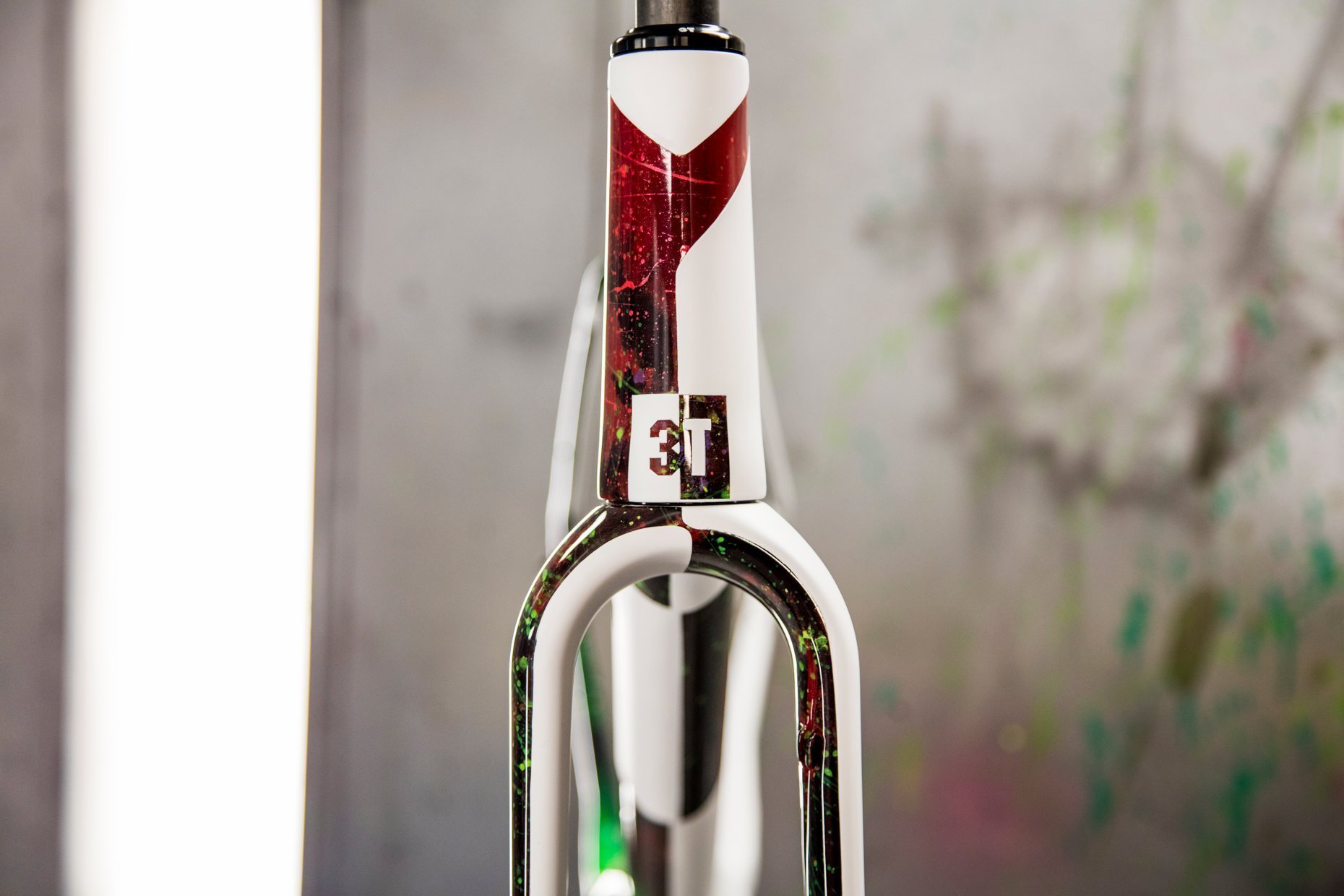 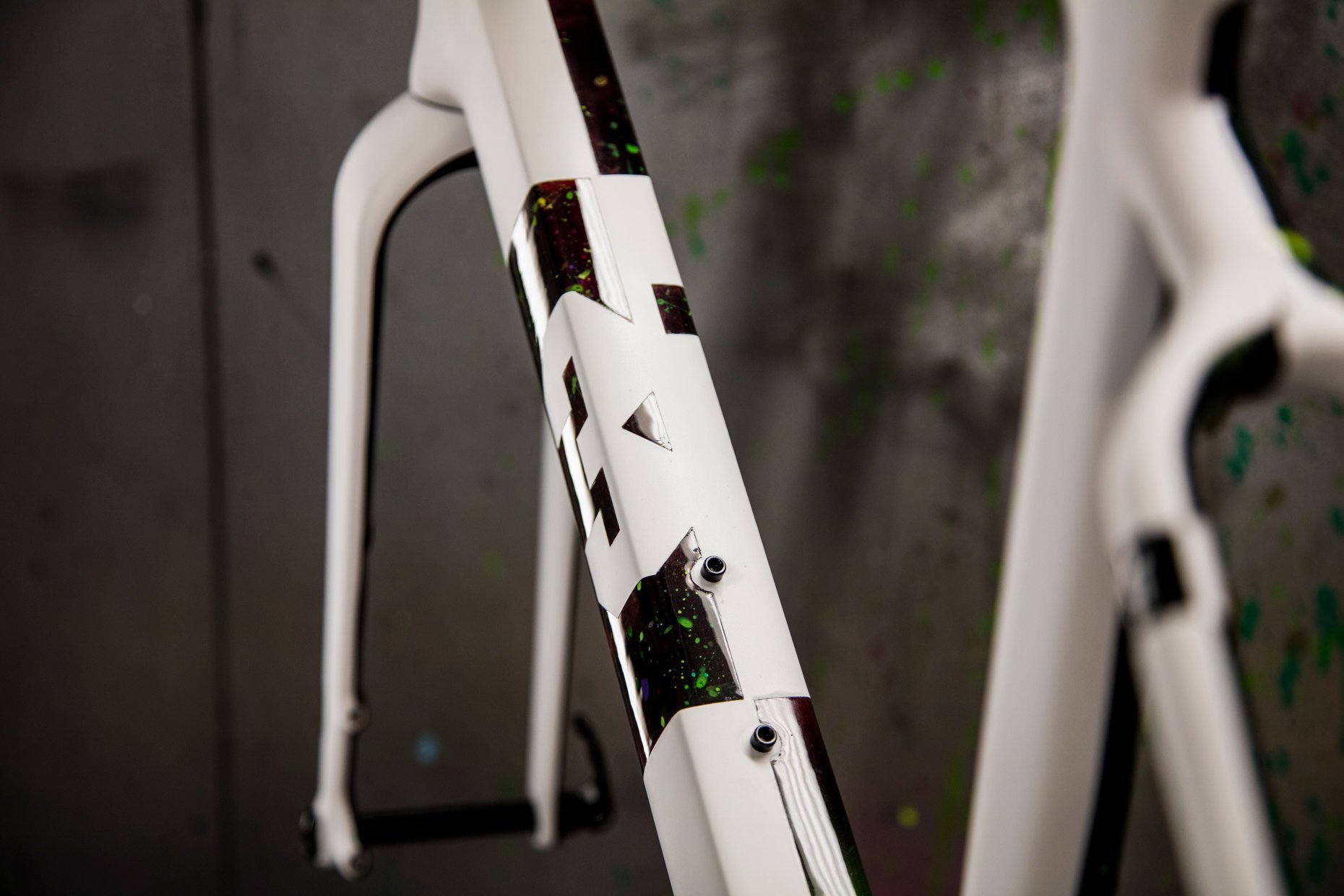 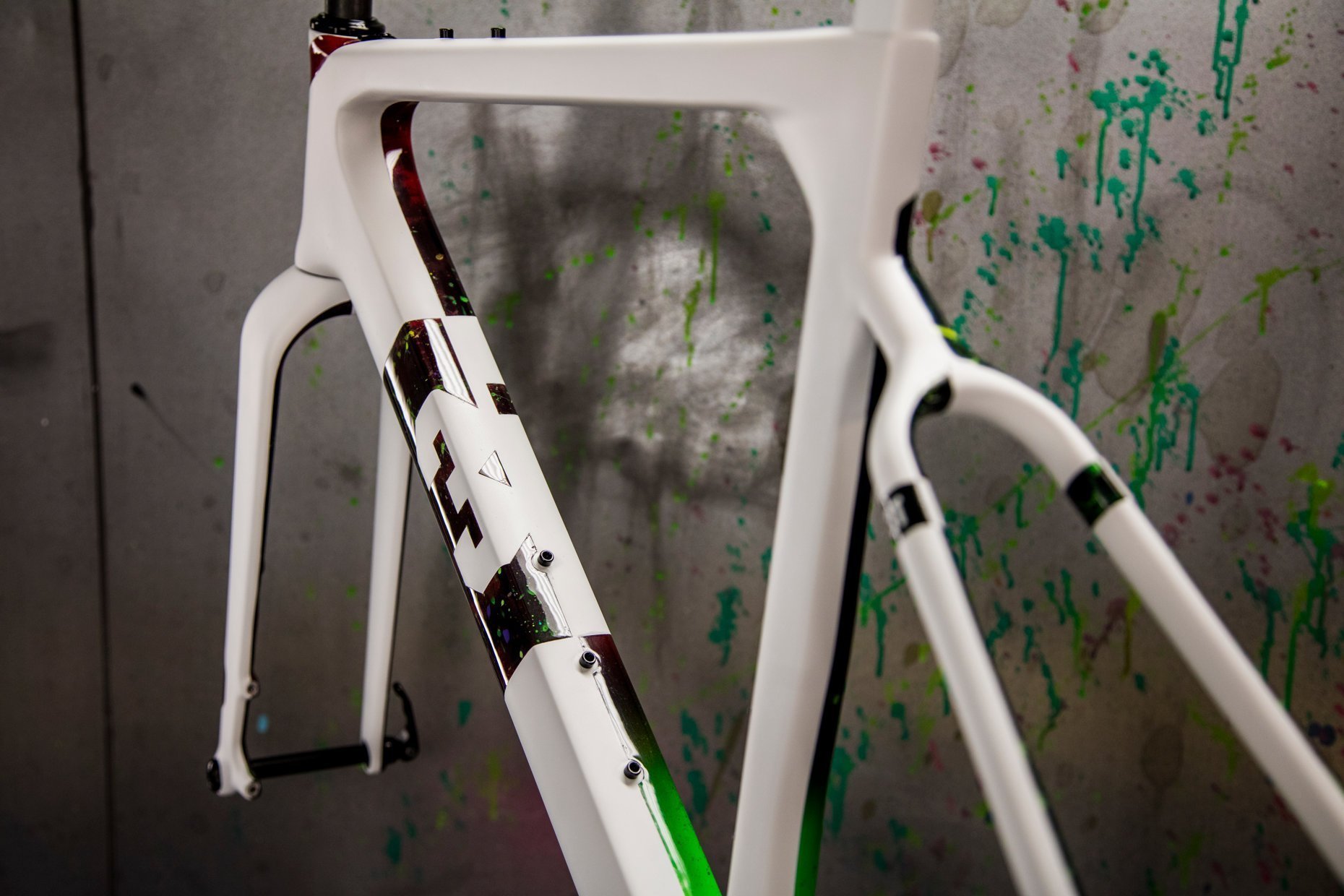 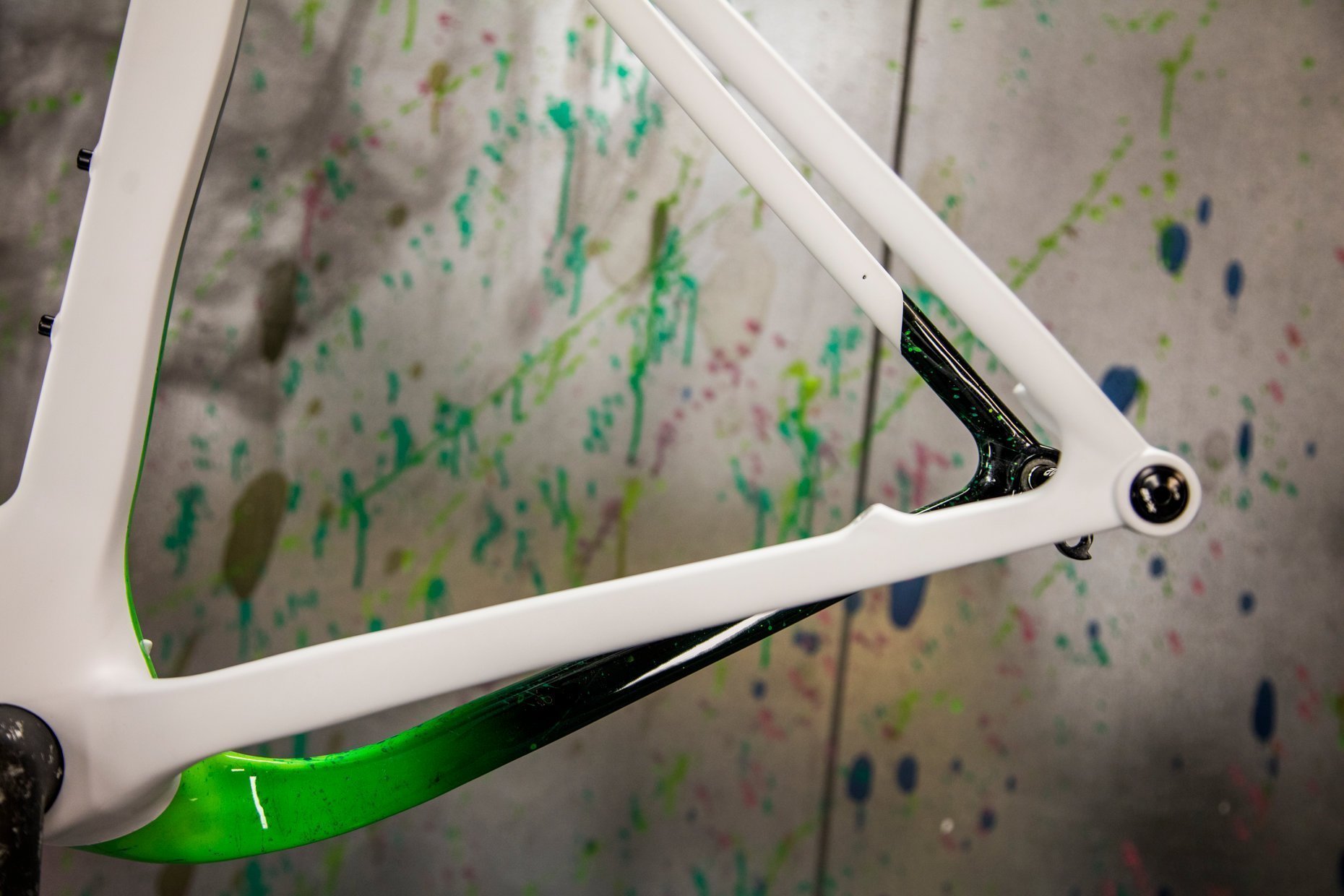 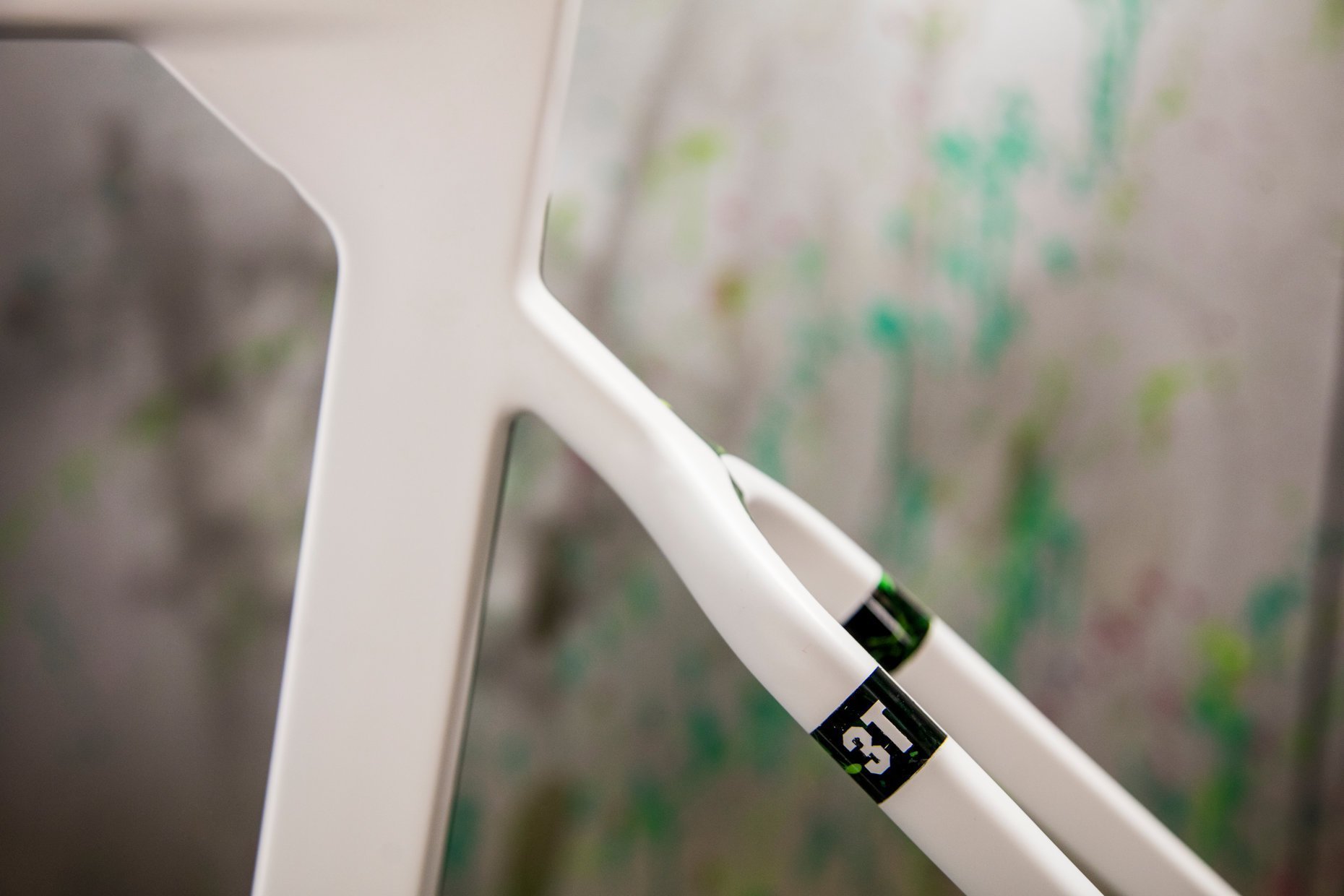