As I mentioned in my previous blog, the Get Creative series will highlight the boldest and most beautiful custom painted 3T creations using our Ready-To-Paint Strada and Exploro framesets. The first one was done by Toby Stanton of Hottubes, whom I’ve known for almost two decades.

But that’s all in the previous blog, I’ll let Toby tell the story of this custom project:

When Gerard approached me about doing an American flag themed bike he had very few rigid guidelines other than he didn’t want it to be just another waving flag bike. Gerard mentioned that he was thinking a “deconstructed” flag. Have the colors of the flag for sure but maybe in different proportions. I liked that idea. We agreed that blue was a good main color. I knew the blue I wanted. It’s lighter than American flag blue but would work well.

Gerard e-mailed me this professional sketch for a basic starting point and left it to me to run with from there. 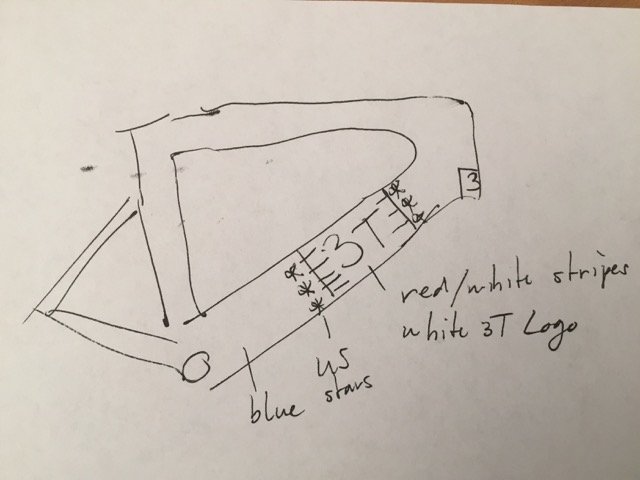 After mulling it over briefly, we had a short call where we agreed that even the logo on the downtube could be omitted as we would try to pair it down even more. I knew I wanted the frame and fork blue but needed to give the impression of the red and white stripes. Every idea about how to do them looked to old school and I wanted to avoid doing that. I decided on doing only one white stripe, horozontal, in a field of red, in a panel that 3T is known for.
I mocked it up with tape and pencel lines on the raw frame and liked how it felt. so off I went: 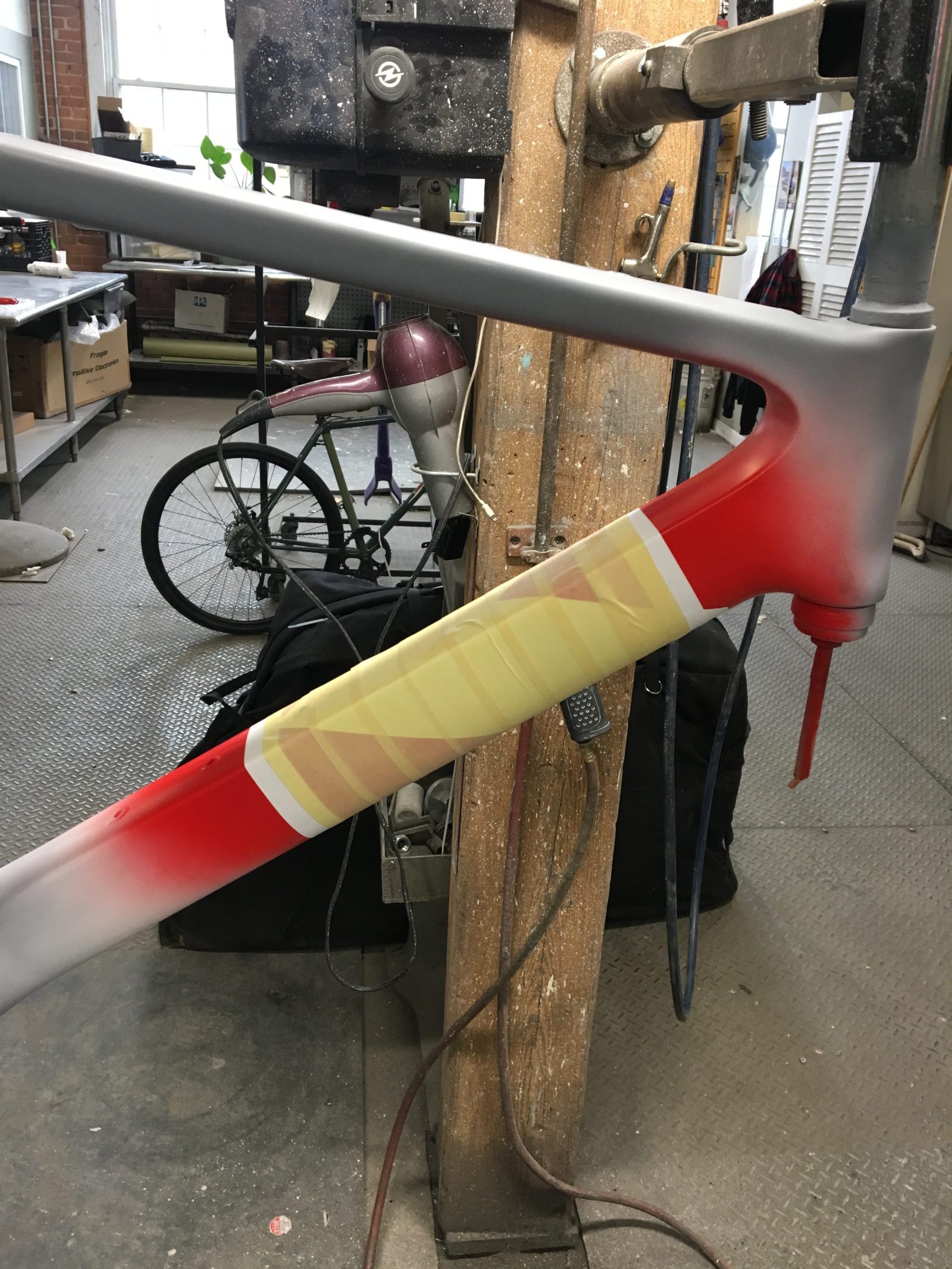 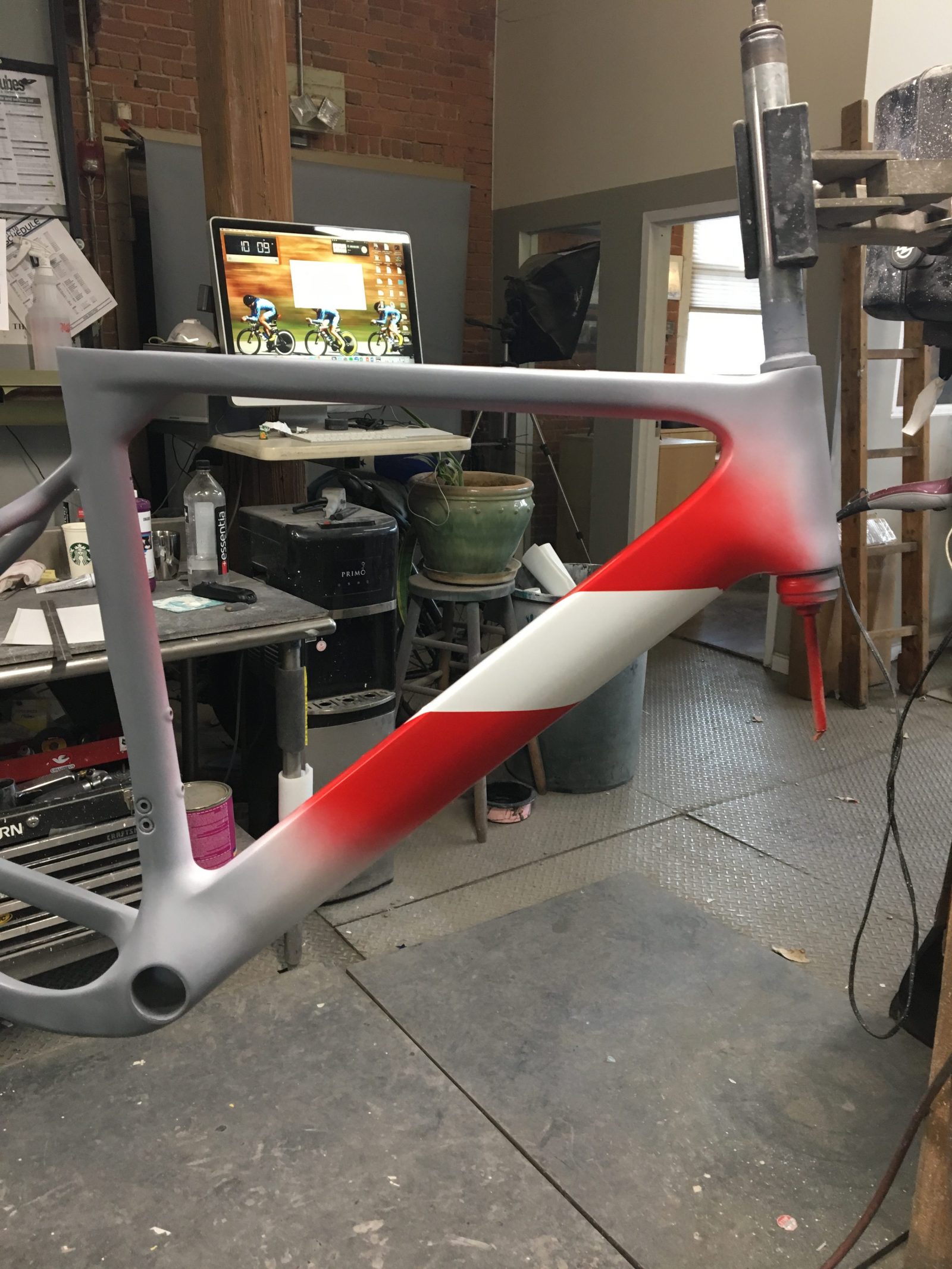 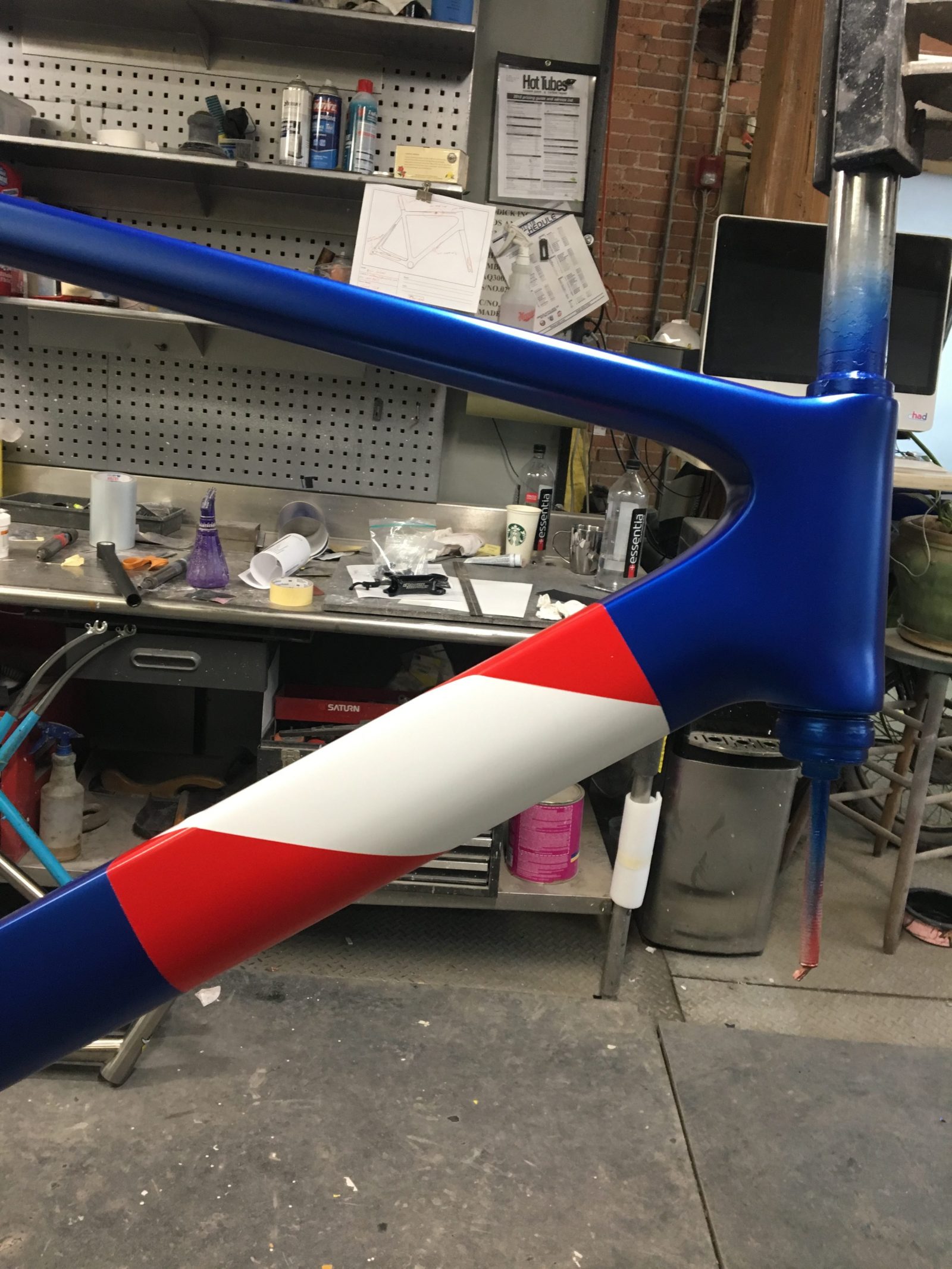 The only thing remaining was where to include some white stars. I wanted it to be a graphic design element and not just a block of stars and decided to just include them on the inside of the fork blades. 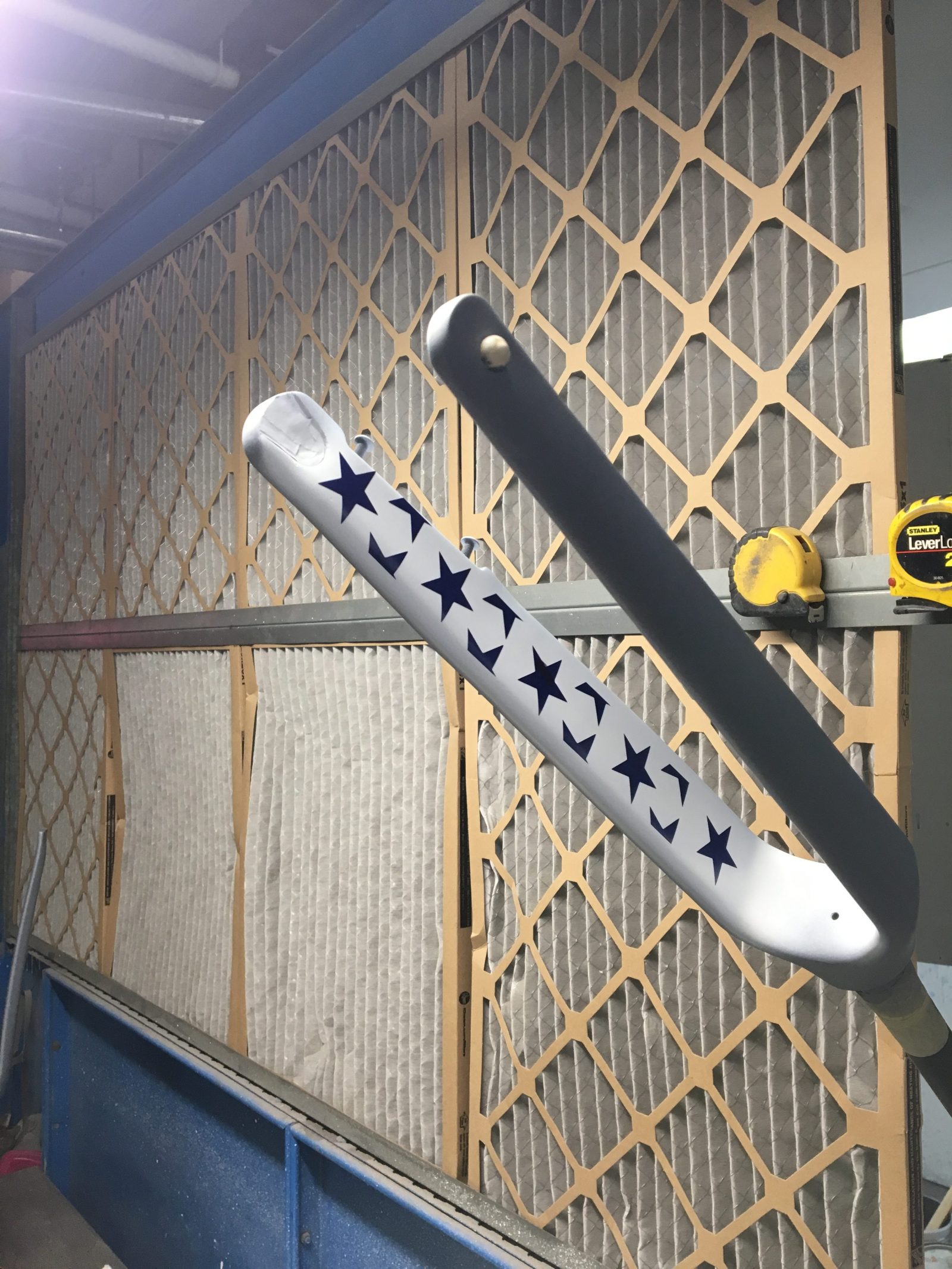 I did it first with a line of vertical stars in the center of each blade and liked it but it felt like it needed something more. I made a second set of stars and cut them in half, top to bottom and used just a portion of of each to give the impression of a field of stars and that was it, I liked it. Lastly, I needed to include a 3T logo. Understated seemed logical and the bottom of the head tube was where it looked best.The rest was just the mechanics of doing the paint and masking. I decided that finishing it off with matte clear gave it a fabric sheen that I liked. 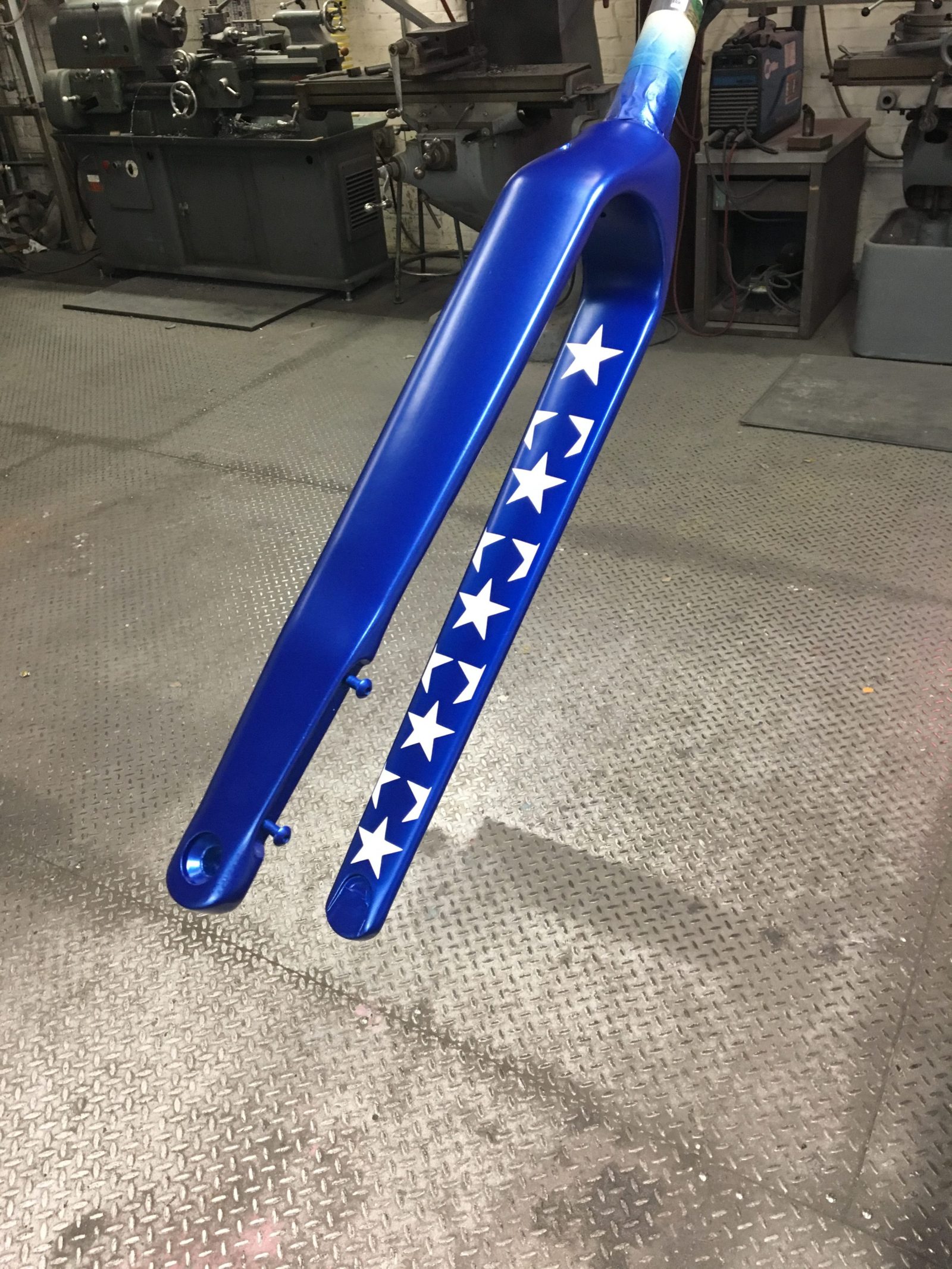 I really like the end result and everyone that saw it in process liked it to. I hope you do as well.
Toby Stanton

In our previous blog, we showed you how Toby from Hottubes came out with this amazing paint job (from a mysterious sketch…) After getting the frame from the U.S. (in a hurry) we caught up with Larry to present him with the frame while he was in the Netherlands in anticipation of the AmstelGold race. 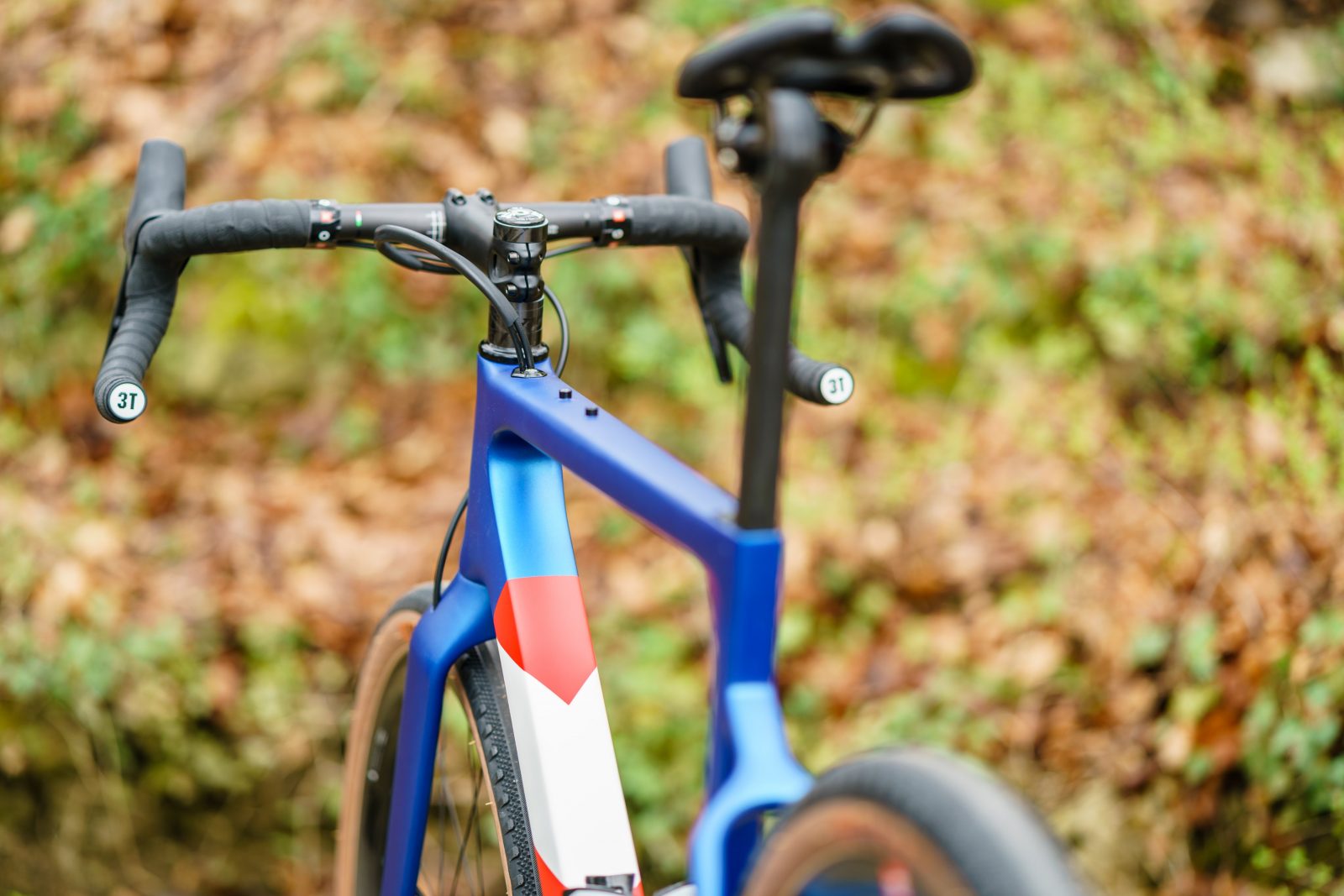 It was cold and misty in the morning near our hotel, but the sun rapidly cleared the fog and rose to welcome us, offering a nice temperature for riding and shooting,  and perfect gravel and single tracks to test the Exploro FM (a first for Larry!) 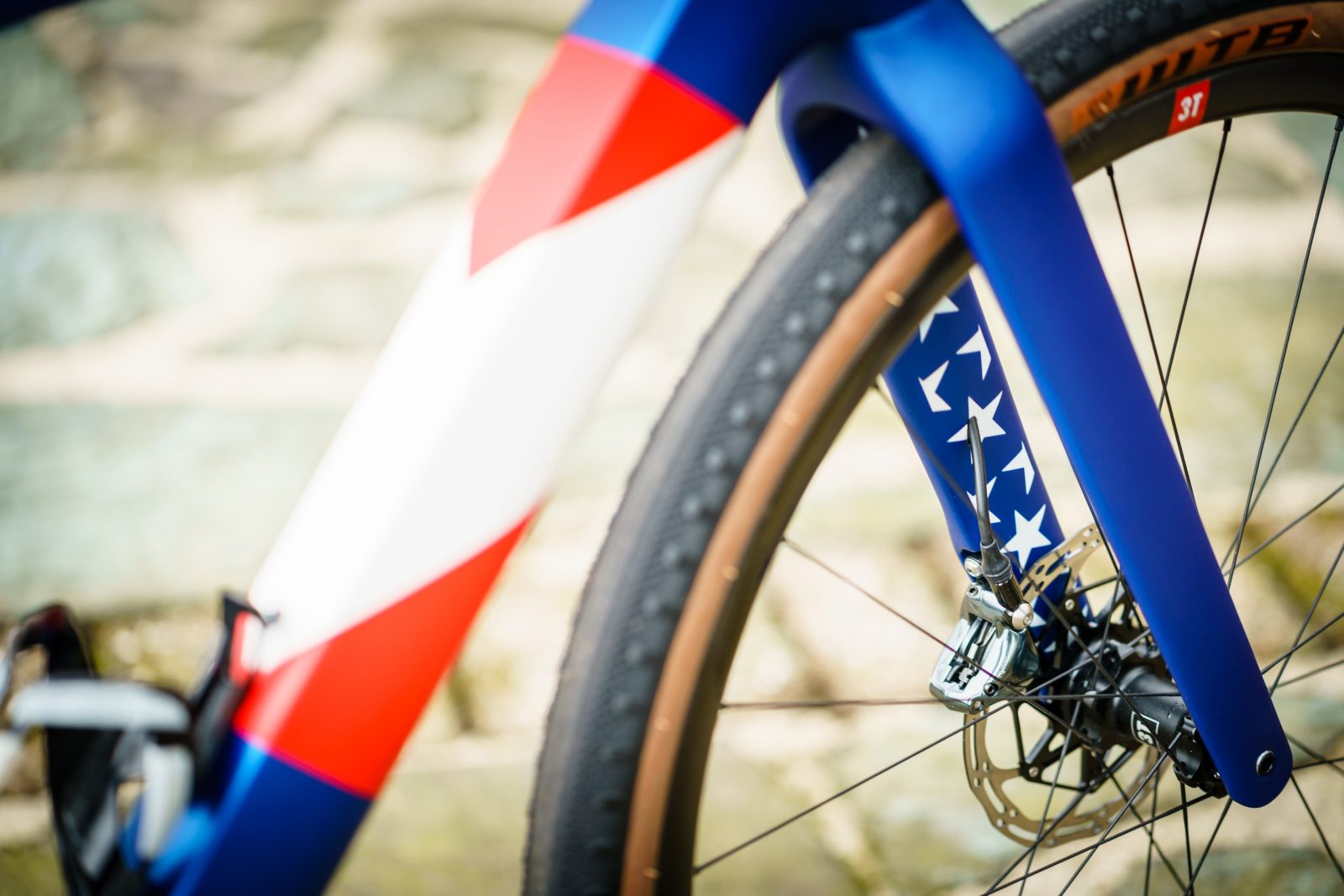 Our XPDTN3 Explorer Kim Van Dijk joined the ride with Larry,  and she gave him a few pointers on gravel riding and 650B wheels. Kim rode on her Lauf equipped Exploro that has taken her around some cool gravel trips around the world. 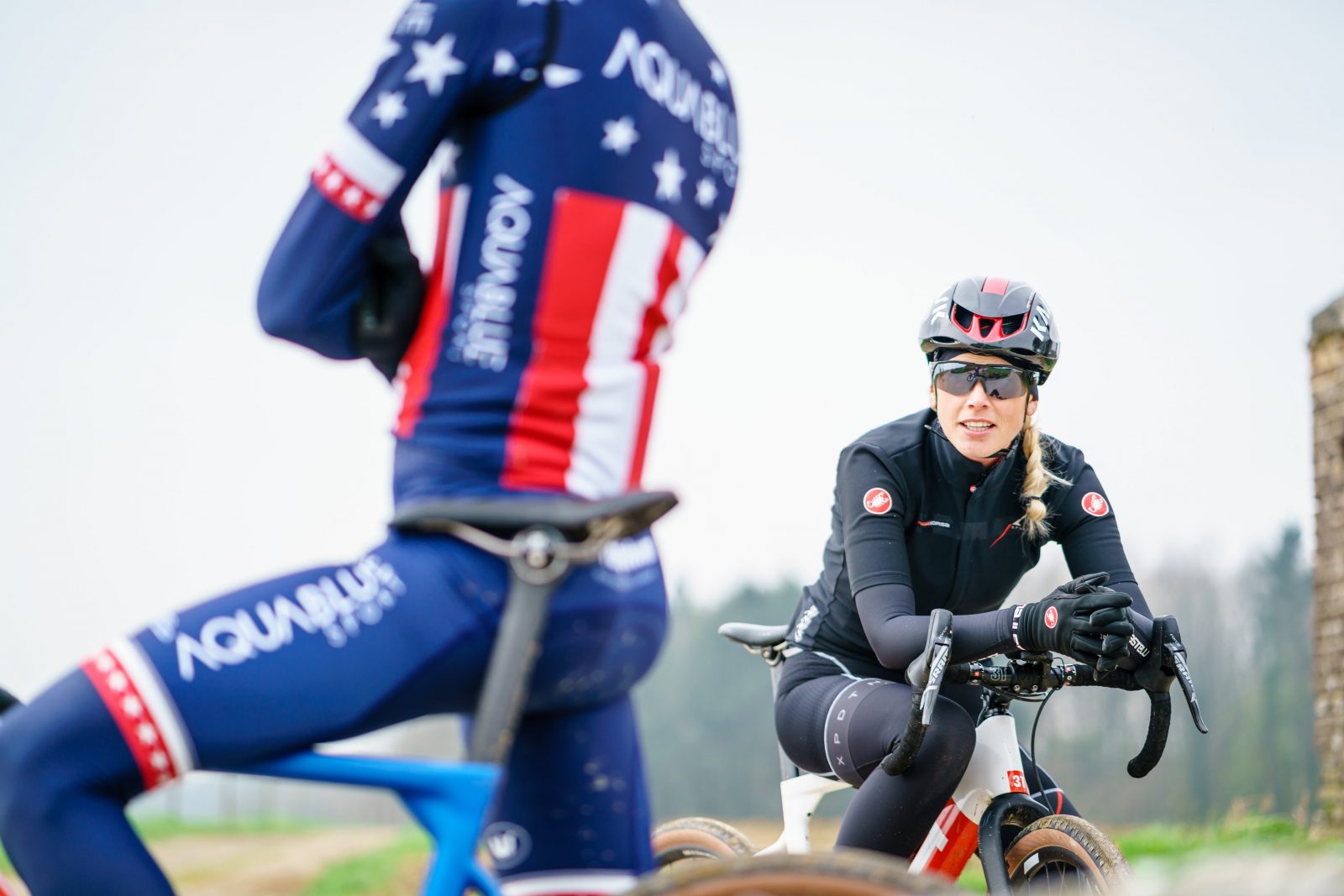 Larry was having fun on his new “weekend & off-season” rig, and his smile after his first ride on the Exploro was enough to make all the team effort worthwhile!

Here’s the final result with the complete bike, we think it looks pretty cool, what do you think?:

TIRES: WTB Byway (Larry uses Pirelli on his road bike, but they do not offer 650B gravel tires yet)

Check the VIDEO and the full PHOTO GALLERY below: (just click for full-size)