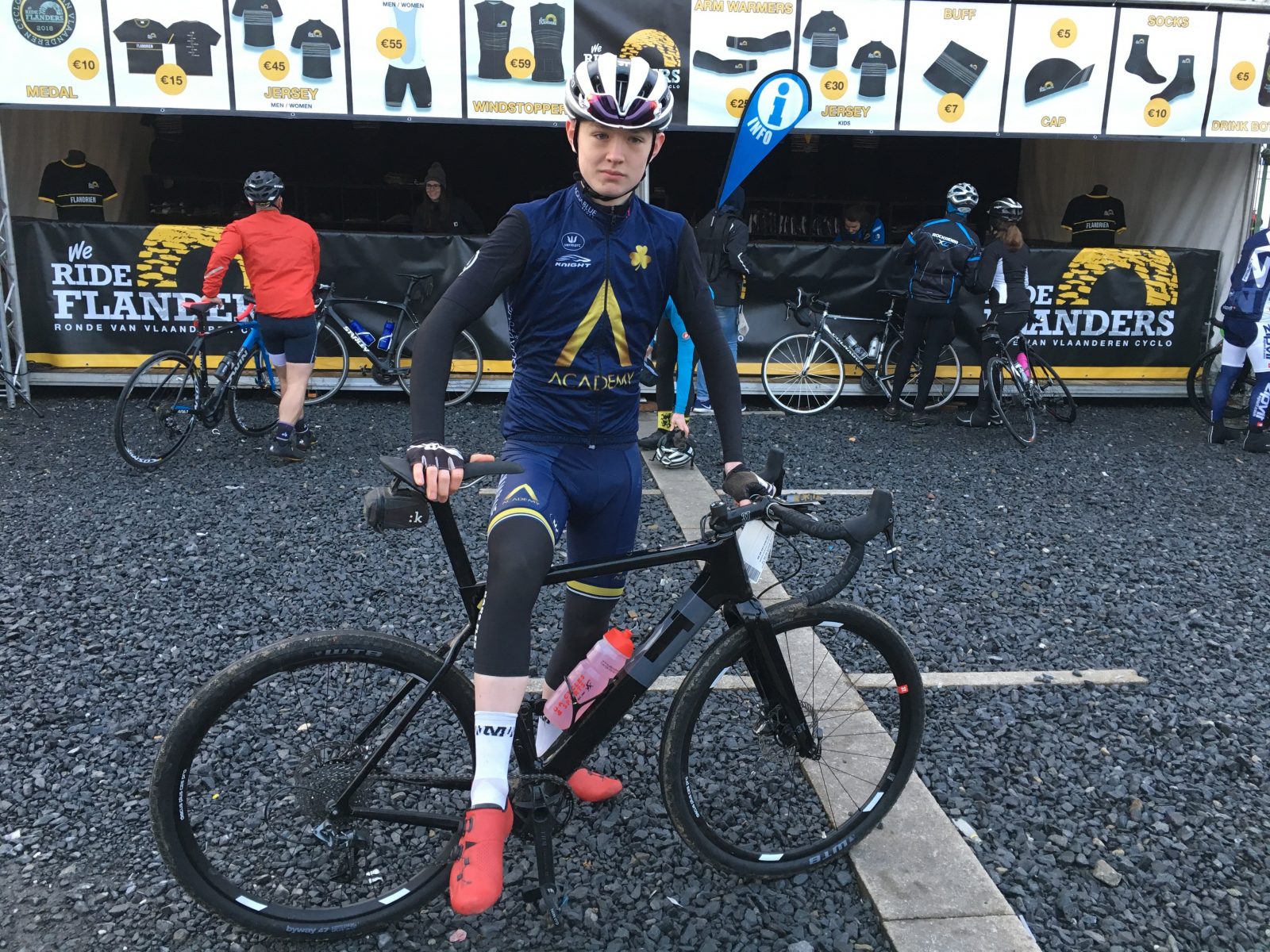 There was a bit of hanging around the start in order to sort out my registration. 07:30 and I was on the road. I was nervous for what was ahead of me, though I knew that the exploro would be the best tool for the job.

The registration was super easy all I needed was my confirmation e-mail and to get in the correct line for my number, the frame plate was easily put on with the zip ties provided. Once the number was on the bike it was time to hit the road, 174 km of road. 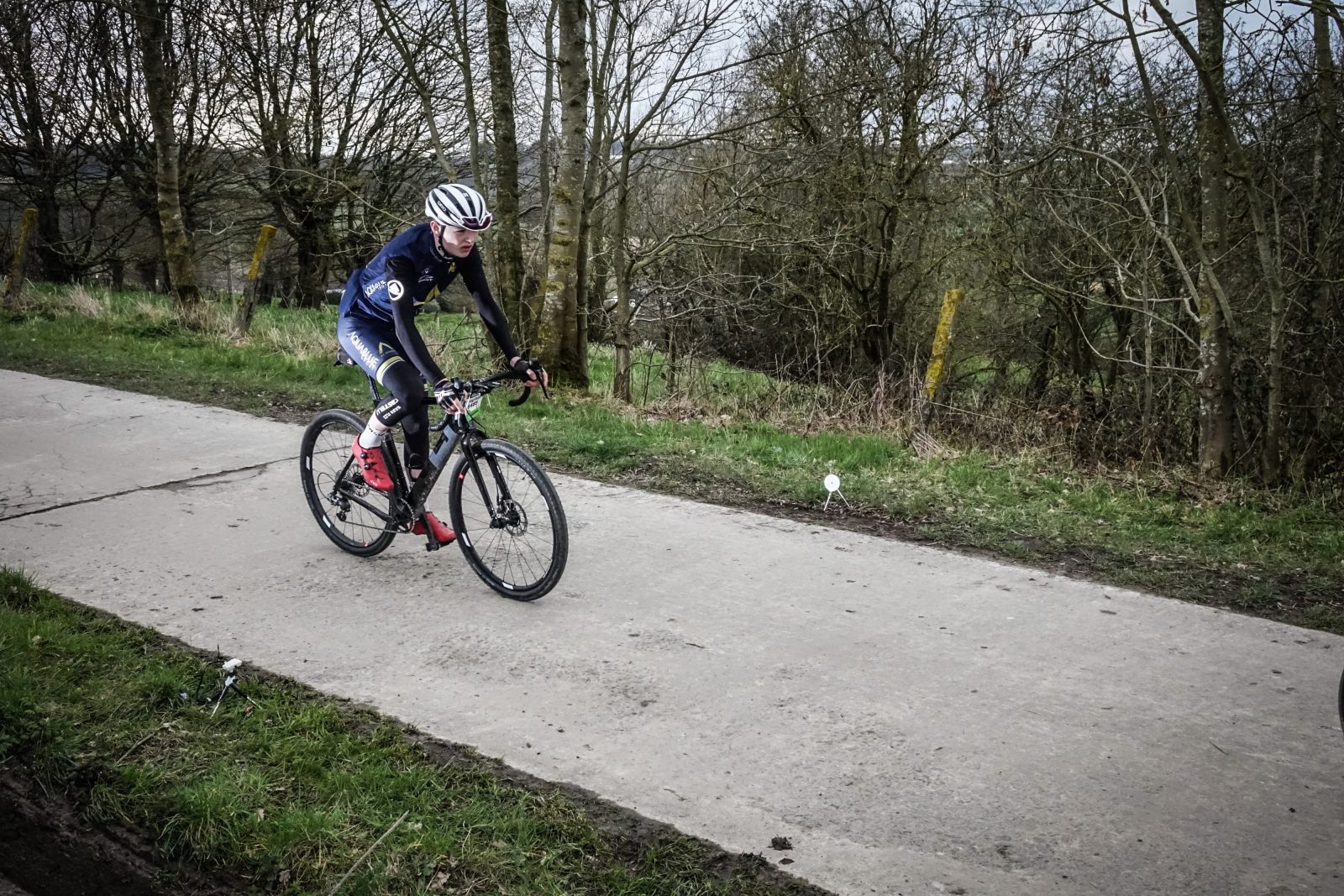 The first 9km I was keeping up with all of the top of the range road bikes with the 25mm tyres and had no problem doing so. I quickly hit the Wolvenberg, the first of the climbs to be tackled over the course and even though the climb was completely paved the exploro still proved to be well above the rest.

The second obstacle was where the exploro really shone out, the Ruiterstraat, I took this on with 52mm tyres and only 30psi, a setup that made the cobbles feel like nothing. It was a slightly downhill sector meaning the aerodynamic qualities of the exploro were put to use.

The only problem I experienced on the cobbled sectors was the other 16,000 cyclists on their standard road bikes holding me up, it made it quite hard to for me to enjoy the bike as I spent my time trying to manoeuvre around the endless peloton. 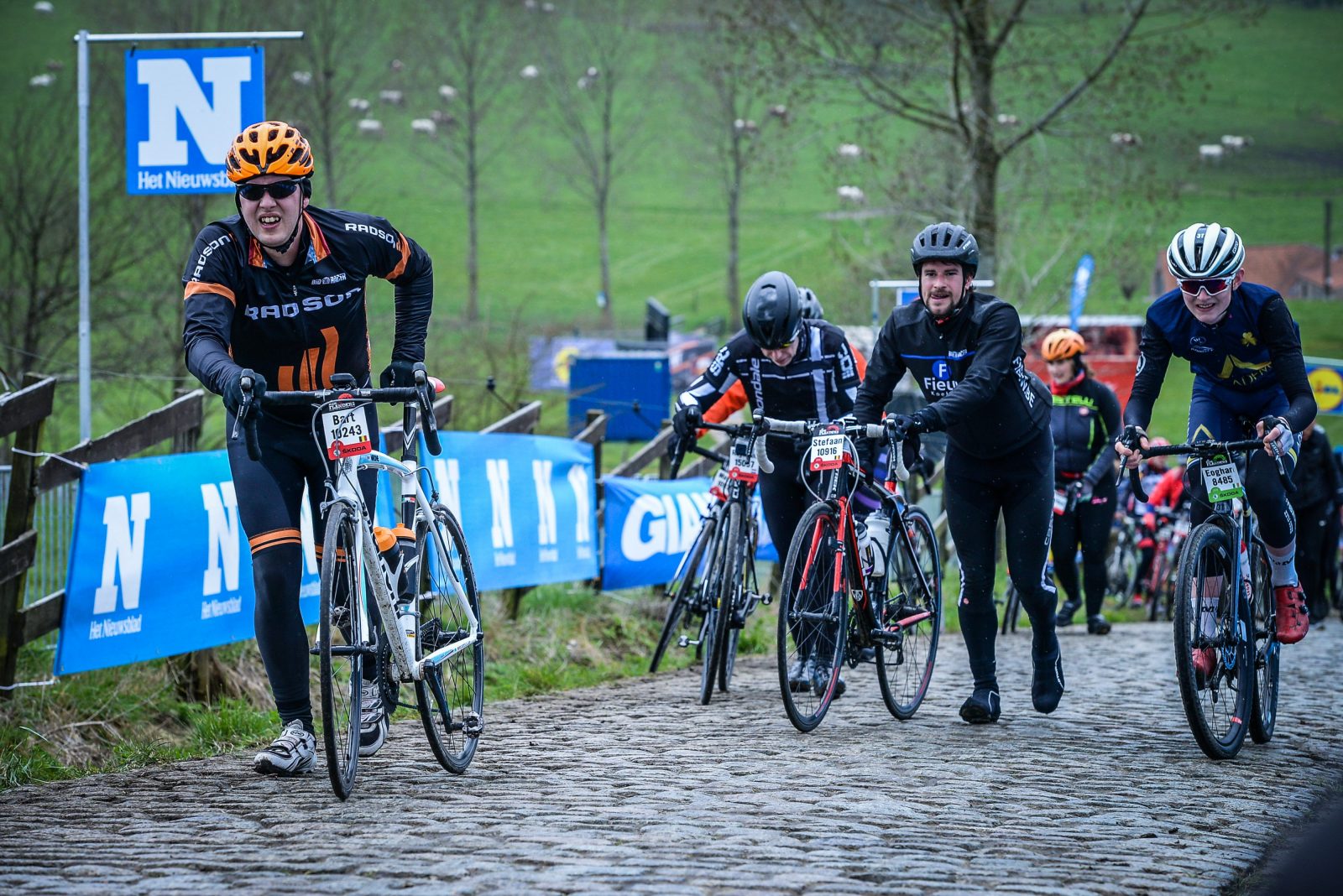 Soon after the finish of the Ruiterstraat there was a short interval of tarmacked road before the cobbles of the Padderstraat sector, for all the others cyclists I could see distress on their faces as they realised there was another tough sector of cobbles on the way, this being rougher than the last one.

However I was quite delighted to see these as they were another chance for me to test this bike, how fast could this bike go, how hard could I hit the sectors before things started to fail…

I couldn’t hit the cobbles hard enough to put this bike under pressure, the 47mm tyres on the bike were soaking up all the big bumps and for any vibrations that did make their way up through the frame were either stopped by the elastomer ring in the seatpost or the very comfortable 3T handlebars and handlebar tape.

As for how fast the bike could go, due to the absorption of cobbles by the bike, the aero profile and low weight of the exploro frameset meant that I easily left the rest of the cyclists with their standard road bikes in my dust. Directly off the Padderstraat was refreshment station no.1, it was only 30km into the ride, so I passed it and pulled one of my own homemade snacks from my pocket made by my dearest mother. 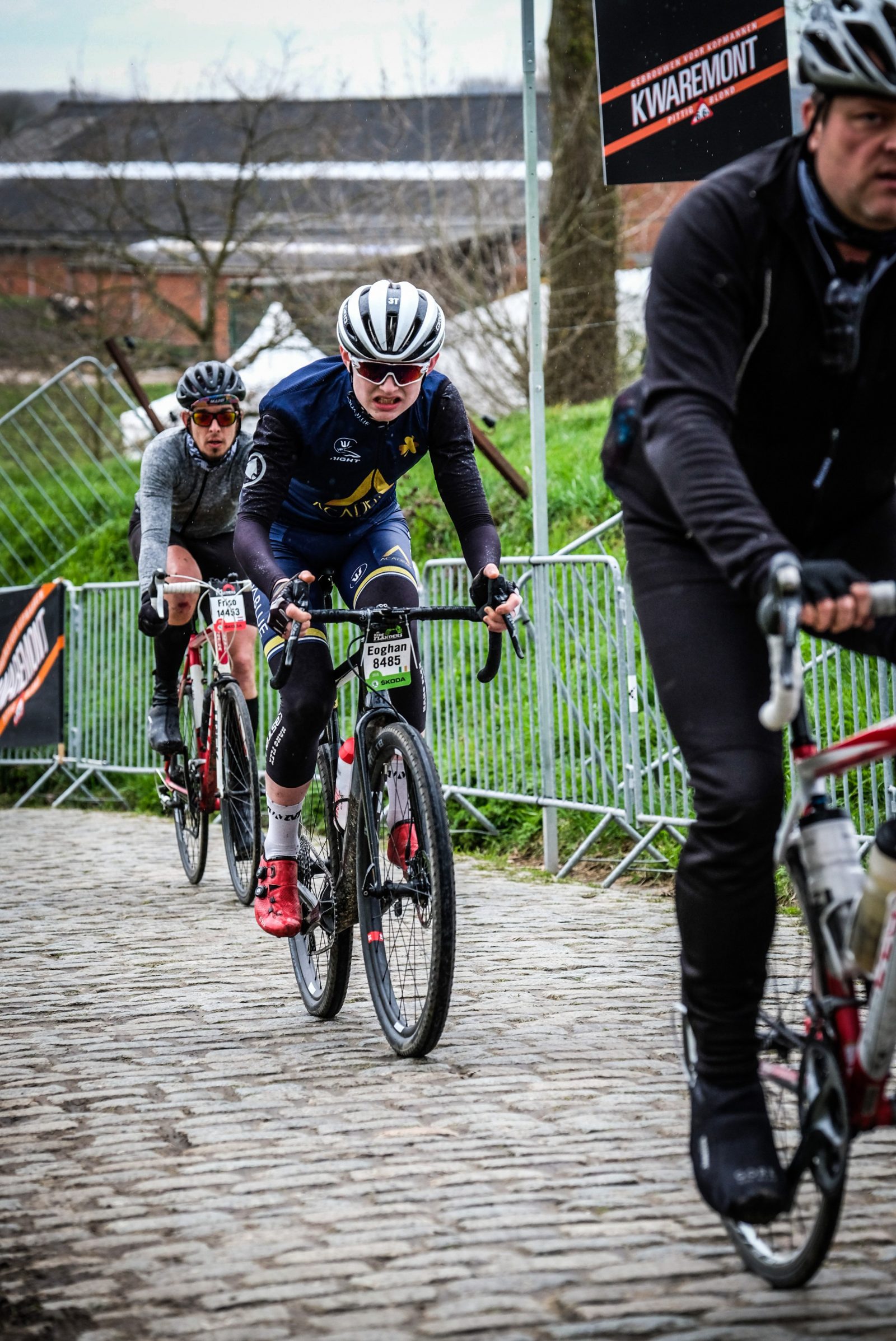 An uneventful hour later it was time to hit the cobbles of the Muur van Geraardsbergen. Arriving up to this climb I was excited to try tear up the cobbles beneath me, recreating some of the most iconic photos of the world’s no.1 pros.

With my super big tyres I wasn’t getting bounced around like the rest of the cyclists meaning not only was I more comfortable but it was also much easier to ride the legs off them. The start of the climb came much earlier than I had expected it and I didn’t know I was on the climb until the third last corner.

It was a great experience taking the final bend of the Muur with all the spectators there shouting at us and cheering for us, that really added to the atmosphere, you can ride this course whenever you want but the atmosphere is what makes the day so special, not every day that you get crowds of people cheering you on like the pros. 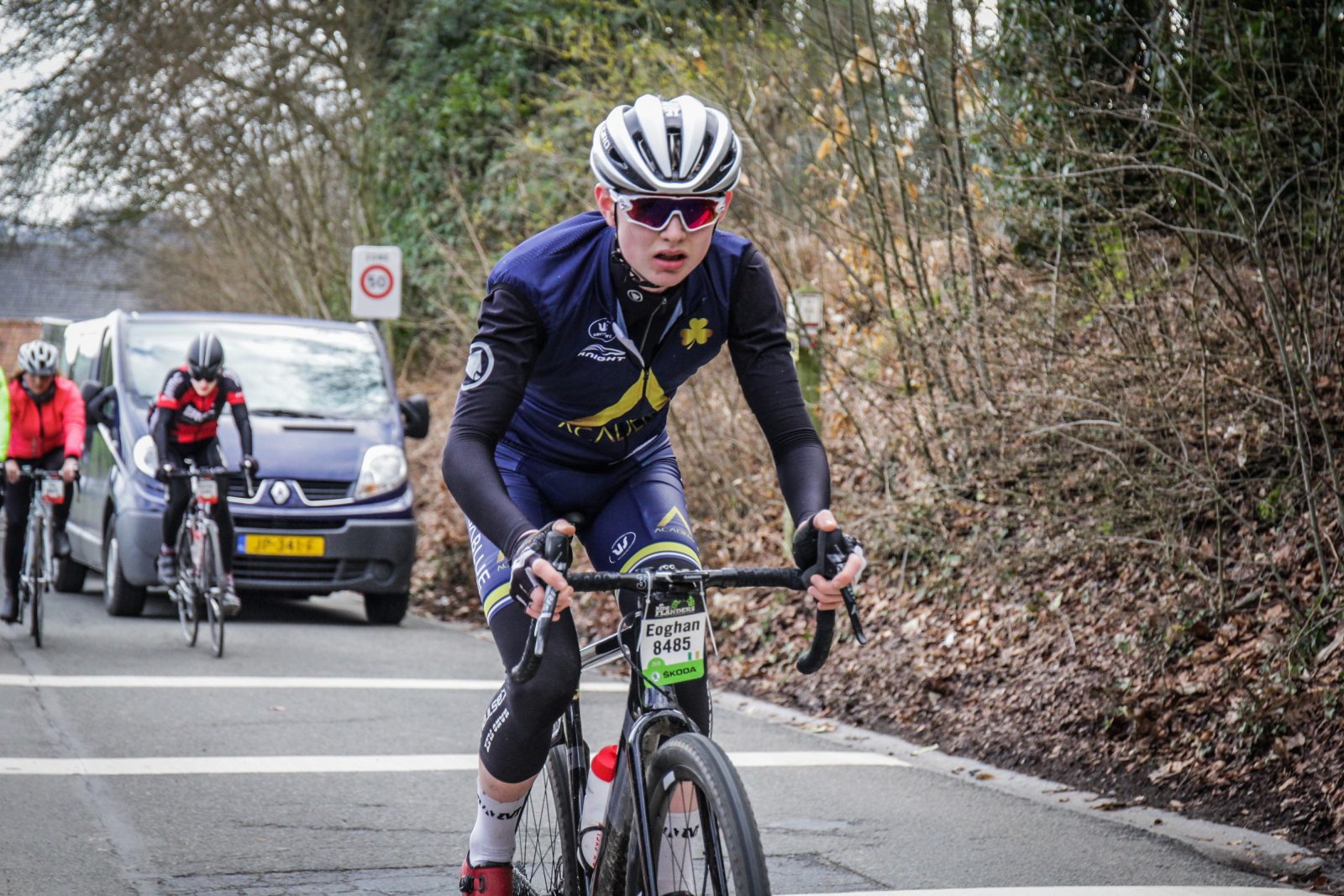 72km in and I hit feed zone 2, I was just over 2hours into the ride and had none of my own food left, so I decided to stop in and pick some up food for the next 30km.

I passed through many climbs along the way to the finish but the next big one after the Muur had to be the Koppenberg, 114km in, the first climb to actually be difficult just to get up it on the bike, at this point there was a good bit of distance in my legs and due to my inability to take it easy they were quite fatigued too. 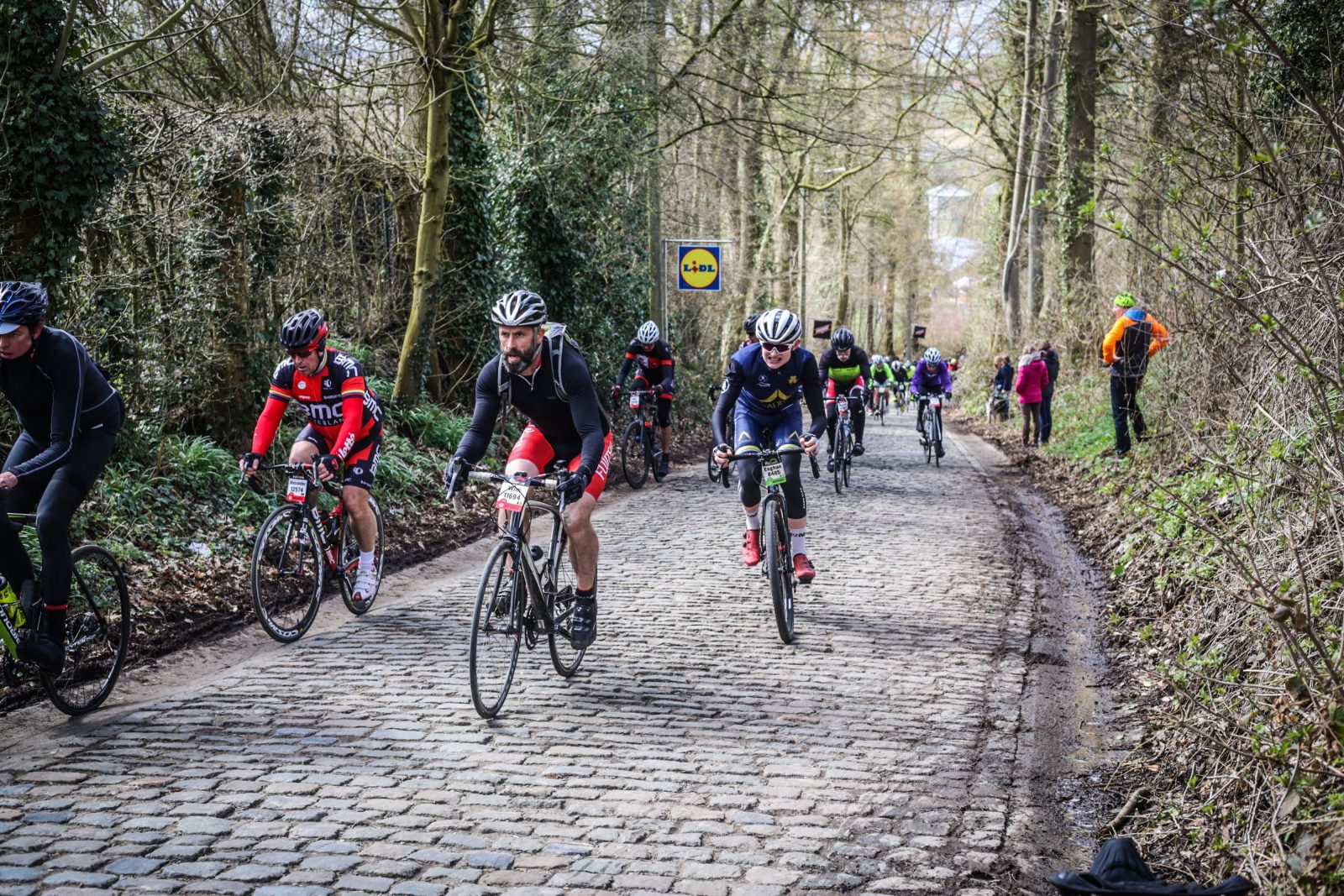 There were so many people riding the Tour of Flanders cyclosportive that they had to stop us at the bottom of the Koppenberg and decided to send us up in small groups of 100, as there were too many people stopping on the climb and then getting in the way of those who were going to get up without getting bogged down.

I had been waiting at the bottom of the climb for 20 minutes, so my legs began to get cold and heavy, which made me worried if I would even make it up the climb, although, I knew my Exploro was the best tool for the job.

I set off hoping for the best and the best is what I got, about 100m up the road is where the Koppenberg really kicked up and put the pain into everyone’s legs, people all around me started to unclip and just fall off their bikes, luckily for me I had a 36/36t gear ratio meaning I could spin away up the climb and just let my 3T Exploro do the talking. 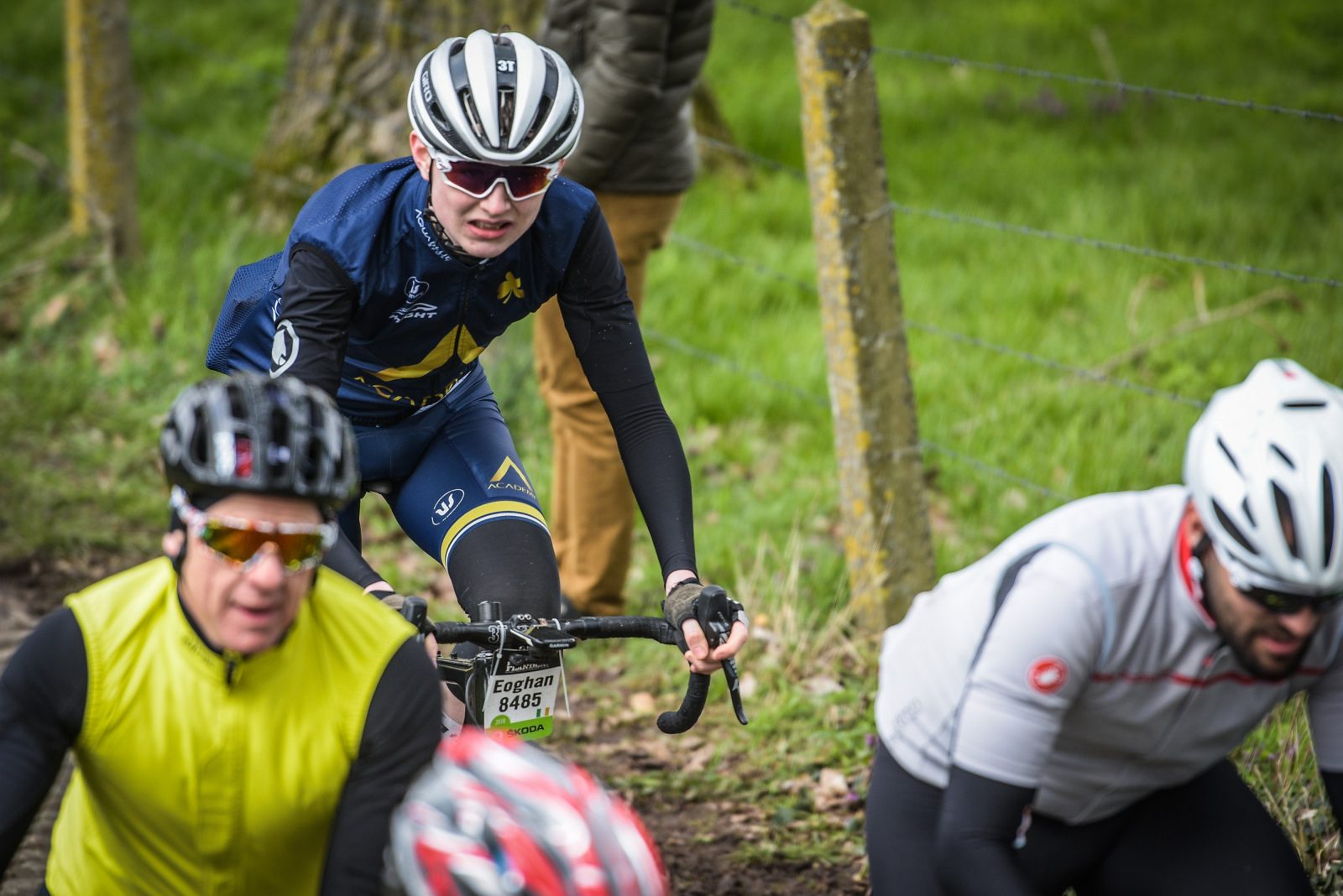 With everyone around, cyclists and spectators alike, standing on the side of the road and me being the last man standing, the atmosphere was astounding, I was getting cheered on in multiple languages and getting pushes which were a tremendous help, it made me feel like I was one of the pros up the road in the real Tour of Flanders.

Full of adrenaline, nothing was going to stop me from getting up there on my bike, I just put my head down and pedalled away, thanks to my bike the cobbles didn’t feel like I was on an unbroken horse more like a grand prix winning show-jumping horse.

I just about made it over the top into an easy decent down the other side and a quick right-hand turn onto a newly tarmacked road, worlds away from what we had just tackled, along the next hour and a half there were many more climbs and cobbled sectors along the along the route none matching the difficulty of what I had just witnessed. 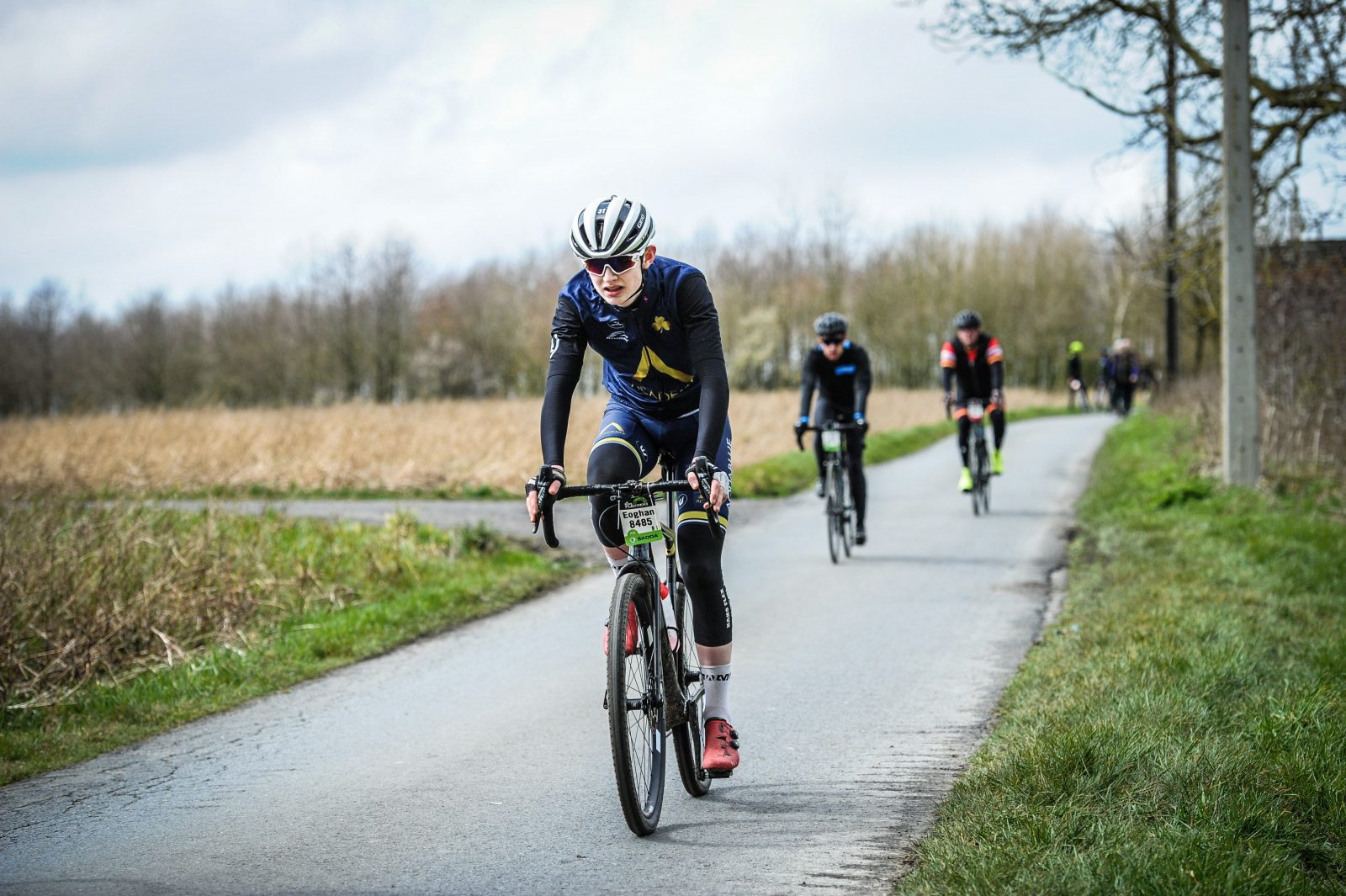 Six hours after leaving oudenaarde the longest ride I had ever done, almost twice the elevation I had ever done in one ride before, and still an hour of brutal climbs left.The final two climbs, the Oude Kwaremont and the Paterberg were the toughest of the entire day.

The two were positioned not far from each other giving me little time to recover from the Oude Kwaremont before I hit the bottom of the Paterberg. I rolled onto the Oude Kwaremont and from the very bottom of it I knew it was going to be super difficult, the cobbles being absolutely no help, luckily the climb wasn’t too steep.

By the bottom of the Paterberg I was sitting pretty at the back of a little group which was very bad placing by me. They were riding along fine until we hit the steep section of the climb, that’s when the others ran out of gears, began to get stuck in between the cobbles then fall on the people around them just like a set of domino’s. 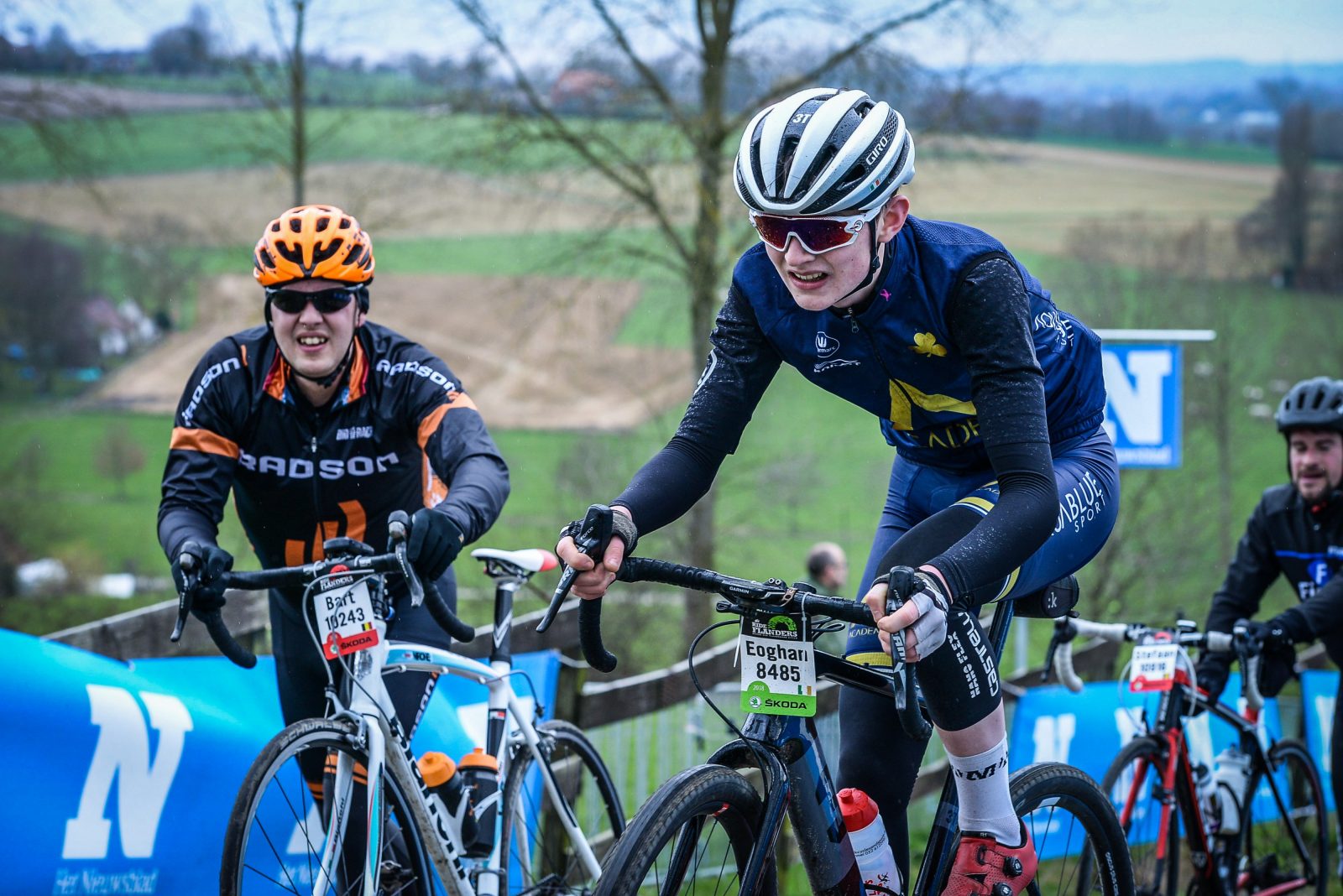 While the rest of the cyclists were falling all over the place I somehow managed to find an opening between 2 guys that opened up at exactly the right time for me to slip through and power on up the climb. My lucky escape through the group of cyclists meant I saved quite a bit of energy not having to do a hill start like the rest.

I huffed and puffed my way up the Paterberg, battled my way around the final corner and had a fast decent straight down the other side, with the long descent and 13km of flat roads to the finish I knew that I had completed it. With the sudden change of mood in me and a huge uplift in my spirit I began to enjoy the final 20minutes on the bike and think about what a great ride I had just had.

I smashed it home, completely emptying the tank.Unfortunately, I made one big mistake,100m away from the finish line I picked out my mother parked along the edge of the road, completely forgetting that I was being electronically timed on the course and that I was going to miss out on a finish line photo, I stopped, threw in the bike and went straight to sleep – not waking up until I made it back to the residence. An unfortunate end to my longest time ever spent on my bike, though still certainly one of the best days out I’ve ever had. 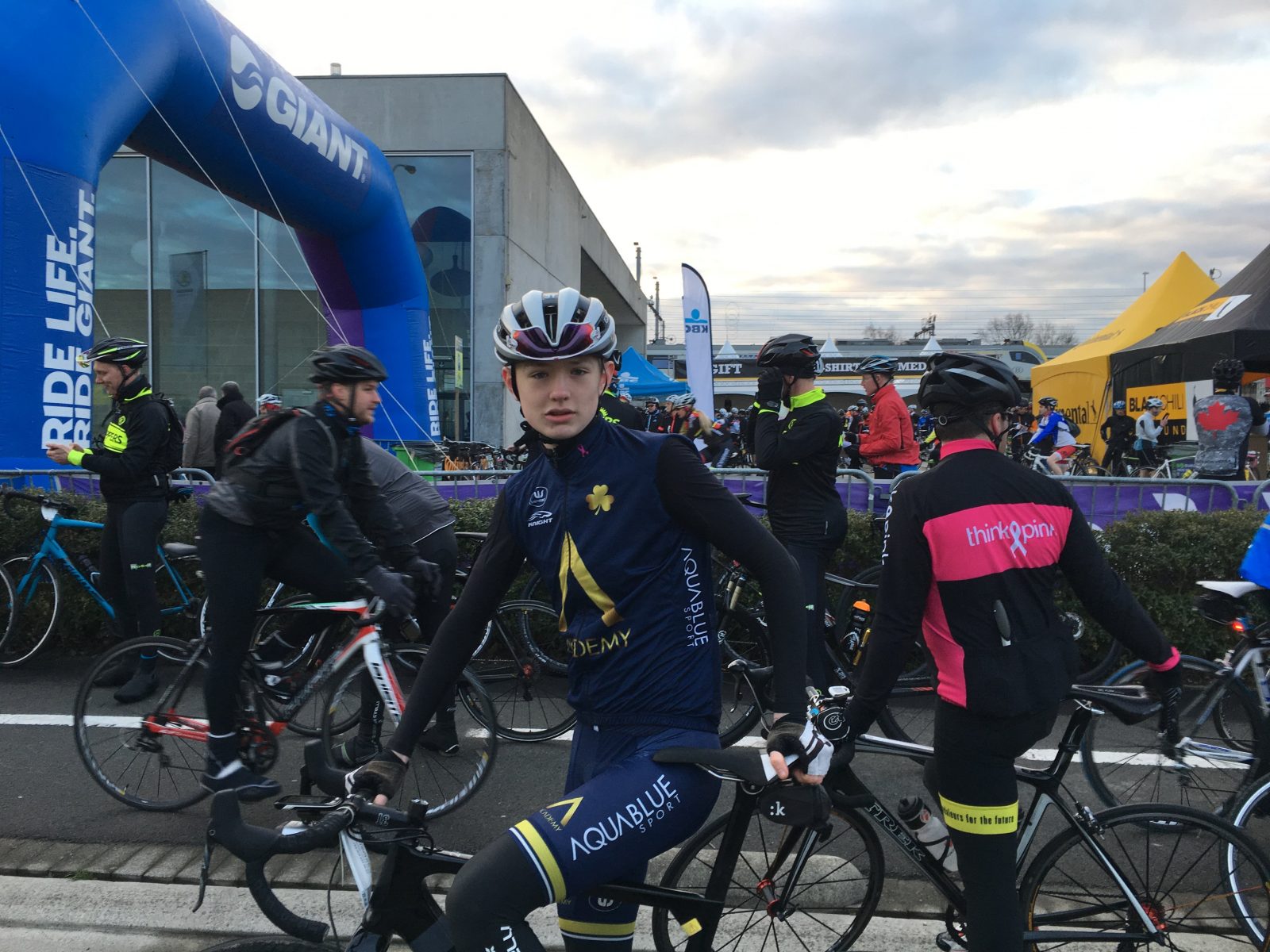