The XPDTN3 project was devised to visit many differing places in the world facilitated by the Exploro bike and its performance and versatility. So, when we had chance to go to Mallorca, a traditional road riders’ playground, we were interested to see if we could alter perception of not only this destination but also what a gravel bike really is.

Our initial plan was more in keeping with the XPDTN3 approach, a large loop covered over 3 days with us carrying our overnight gear with us.  As fate and mother nature would have it only days before we arrived on Mallorca heavy rains had triggered floods and areas we were set to visit were simply not possible. 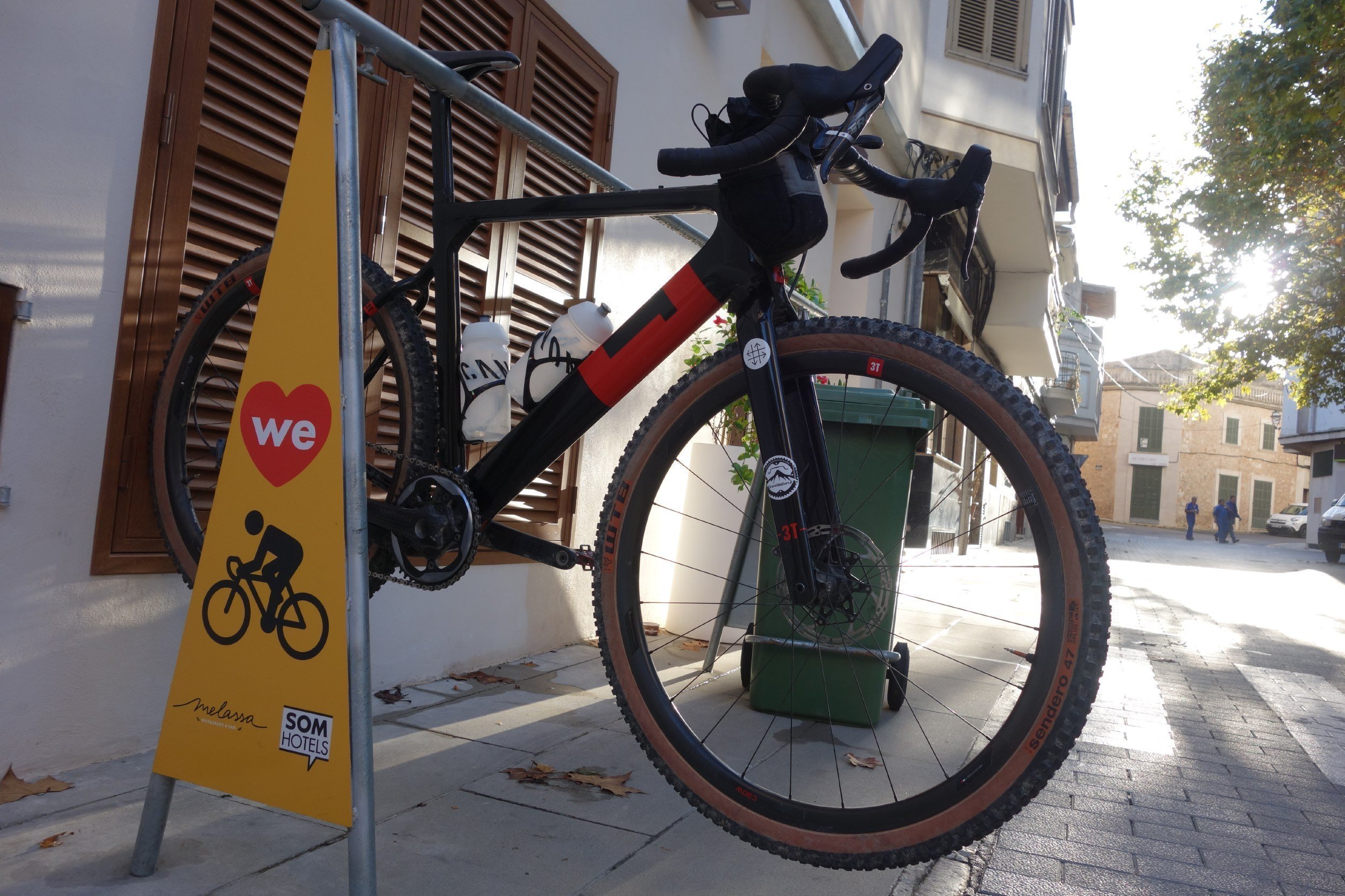 Some revised and innovative thinking was needed. So, what did we decide? Well Mallorca is famed for its iconic road climbs but not so much for its largely unridden gravel trails, so why not combine them both. Each day select an iconic Mallorcan road cycling climb and include as much gravel as we could to get there.

With overnight luggage left behind and tyres inflated to closer to road pressures the Exploro bikes were going to be tackling some of the more challenging road climbs Mallorca has to offer… mixing it up with road riders every day was going to be fun. For this adventure I would be joined by Ken Brinsmead from Wahoo and in part by Fiola Foley from Komoot and Marti from Gravel Mallorca. 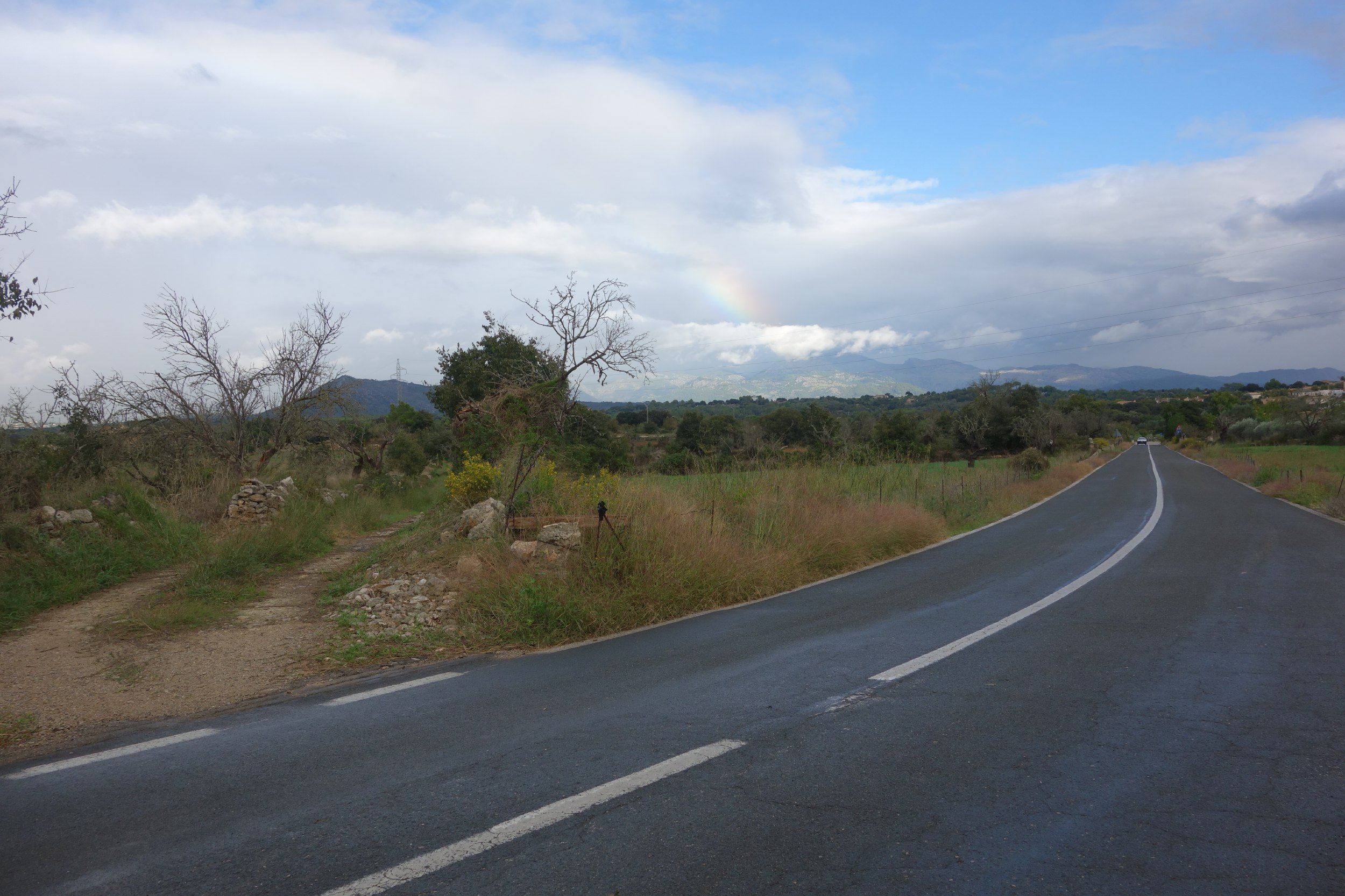 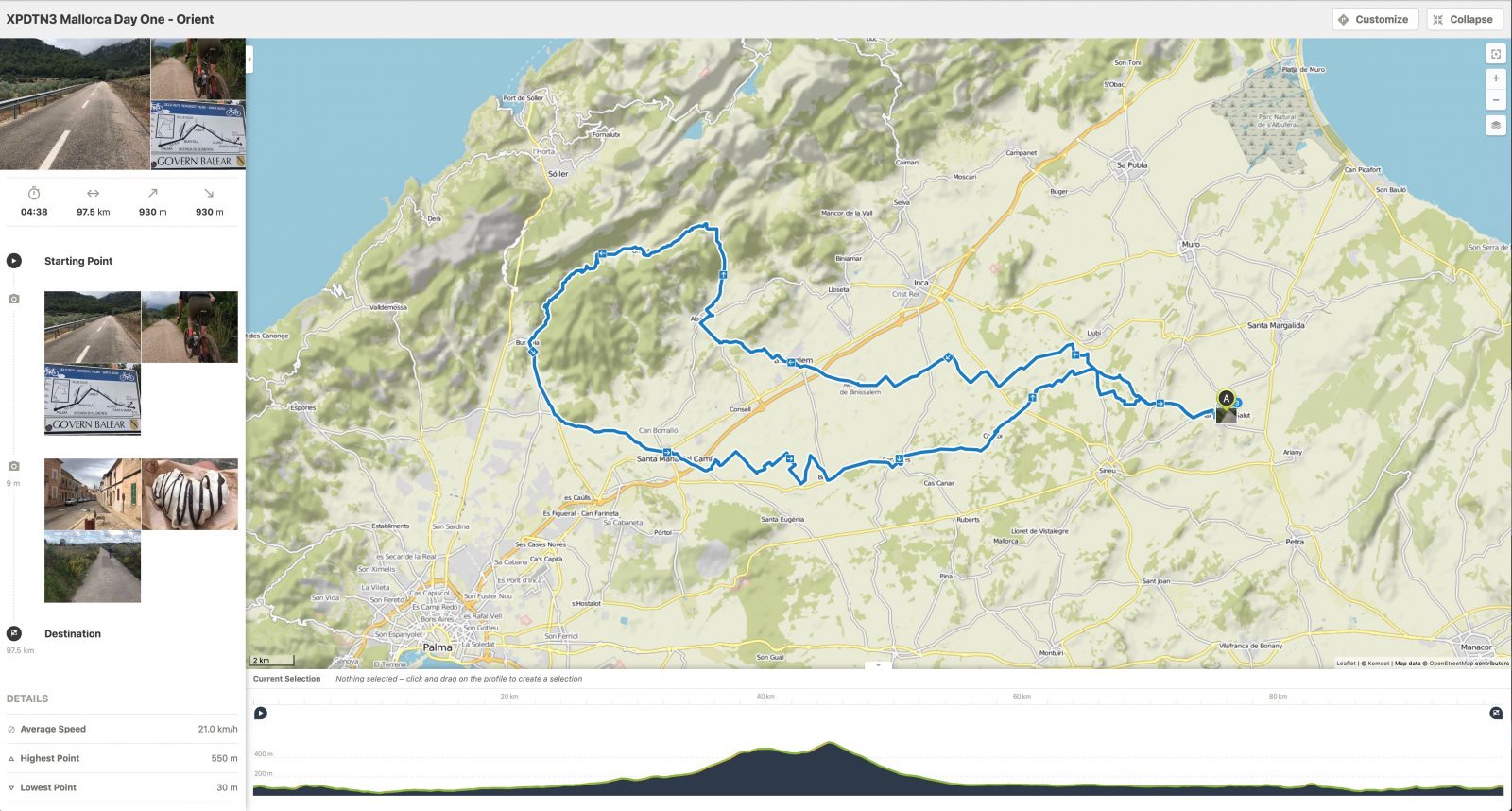 Coming to these riding days directly from another gravel event, we had decided that an easier day was needed.  A route just short of 100km with a little less than 1.000m of climbing was planned.  We would ride out to the remote village of Orient.  A relatively flat route with a single long climb almost in the middle followed by a long sweeping tarmac descent to then return back to the start. 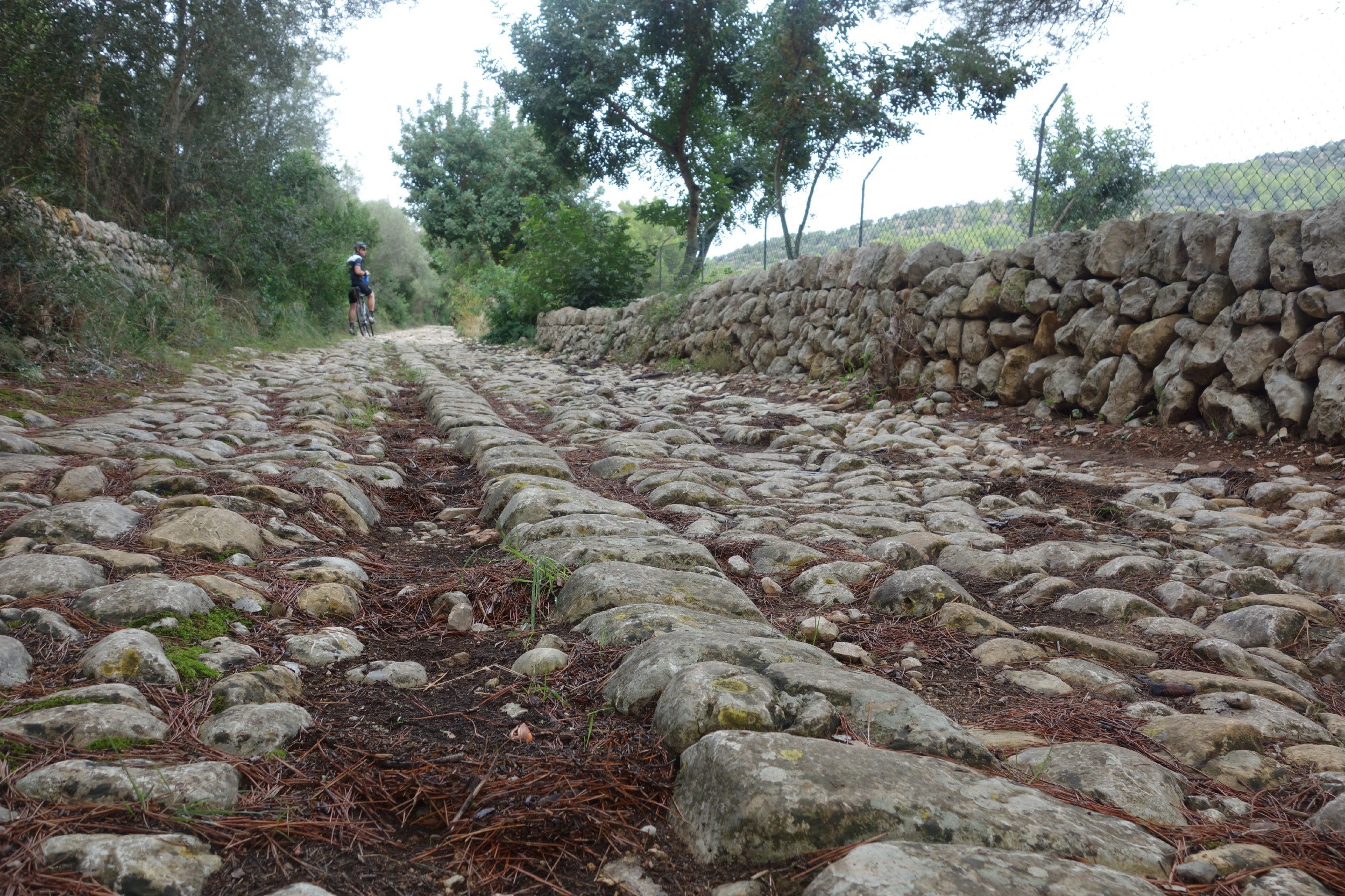 As we left the village of Maria de la Salut where we would be staying each night the skies were blue and clear.  However, looking beyond the flat plains towards our destination in the Tramuntana Mountains it was apparent we would get wet at some point during the day. The initial part of the route was a mix of gravel and cami roads that quietly link up Mallorca and allowed mostly traffic free riding.

The Coll d’Orient climb was only 5km long and its gradient an average of 5% so felt more progressive in its height gain.  We were riding in the mix of a number of cycle tour companies guiding their clients so there was always a wheel to chase to make the climb go quicker. As we dropped in to the village of Orient only a short transition on the relative flat was given before the next pitch started.

This time we dispatched the height gain needed quickly via a series of switchbacks and then quickly into the long fast tarmac descent. Having suffered a heavy fall on the tarmac during the Jeroboam 300 event I was more focussed on flow than speed and cruised down the hill not taking any chances.  Ken a more competent descender glided through the turns and reached the village at the bottom ahead of me. 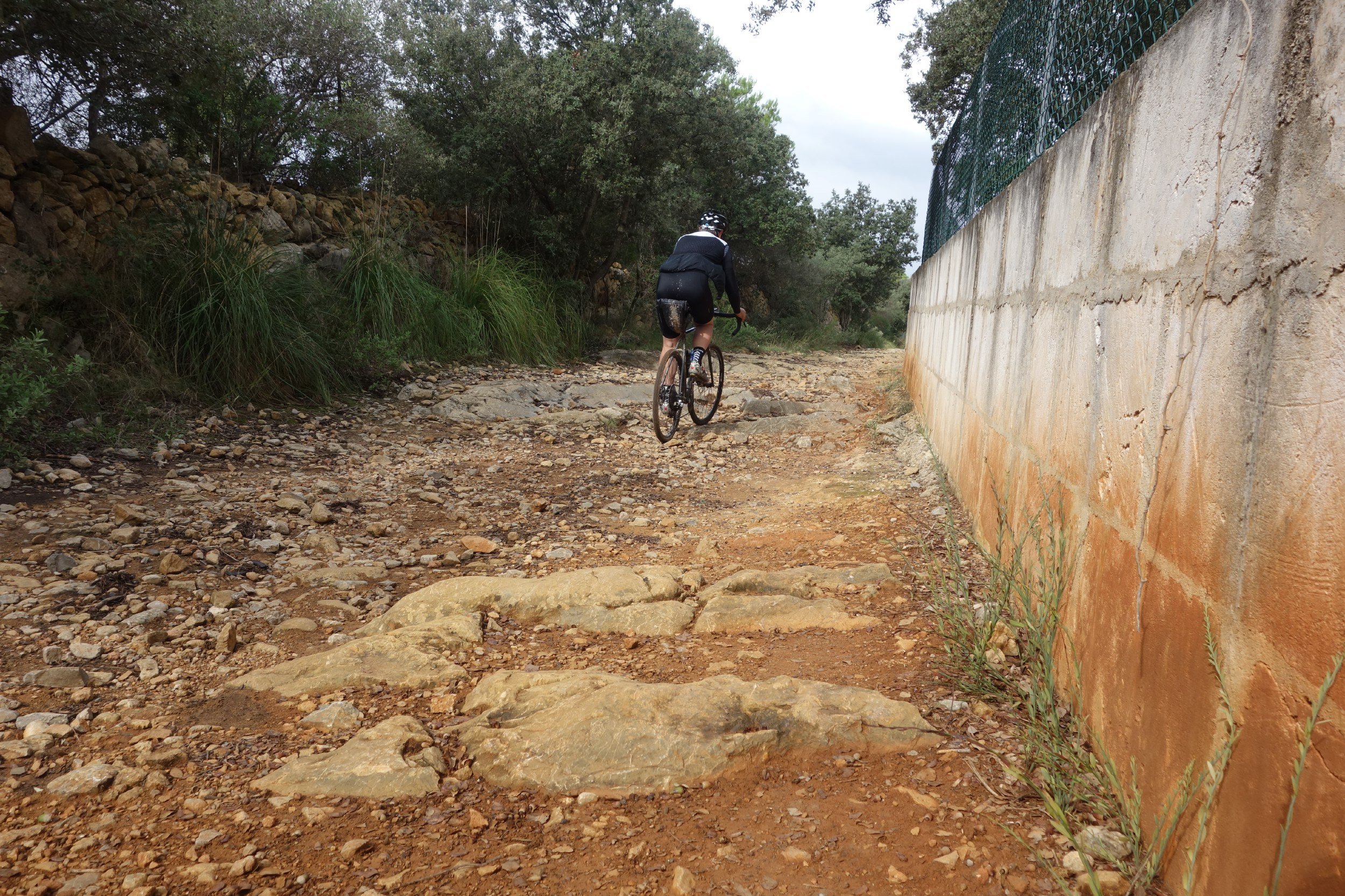 Having reached the end of the descent we rode through a few small towns before deciding it was time for lunch. After consulting the map a quick detour via Komoot was planned to send us to a nearby town and chance of finding food. After much searching a supermarket was our best option but rain had long since gone so an al fresco dining experience with our supermarket spoils was just perfect. 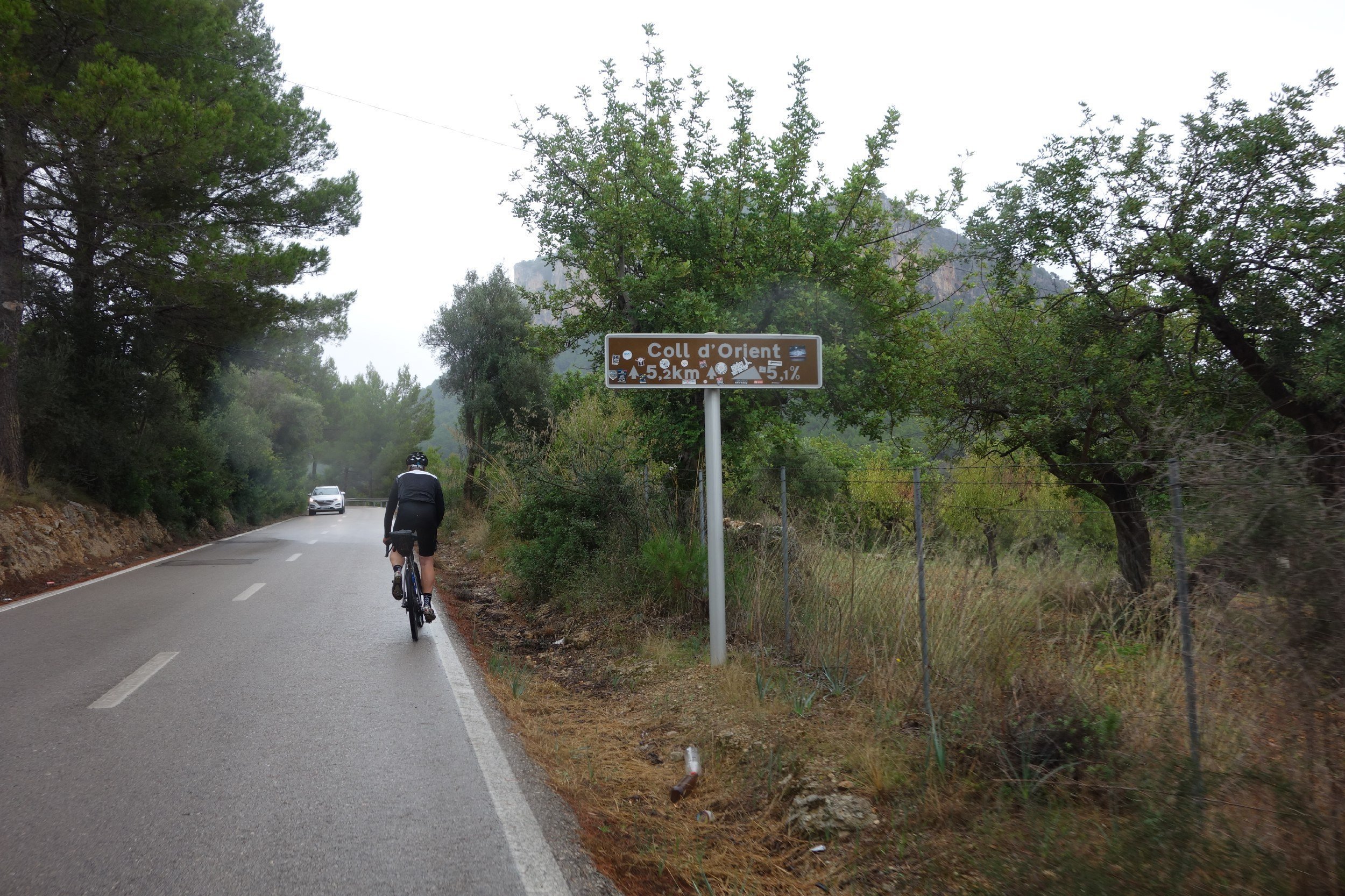 After food, we plotted a route back to join our original course and enjoyed again the mix of gravel tracks and quiet roads.  Day one complete, legs in better shape and ready for the real test the following day … Sa Calobra. 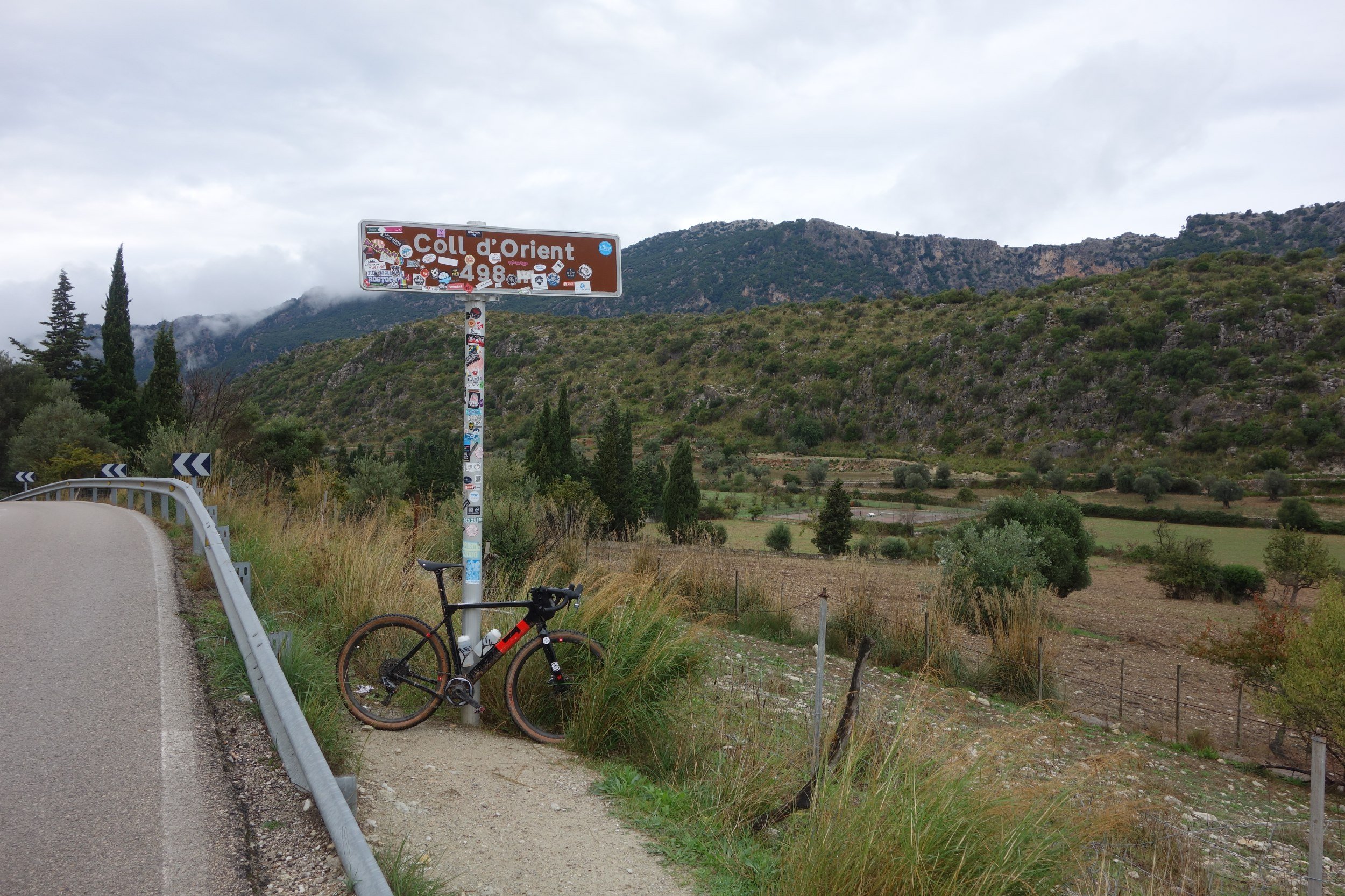 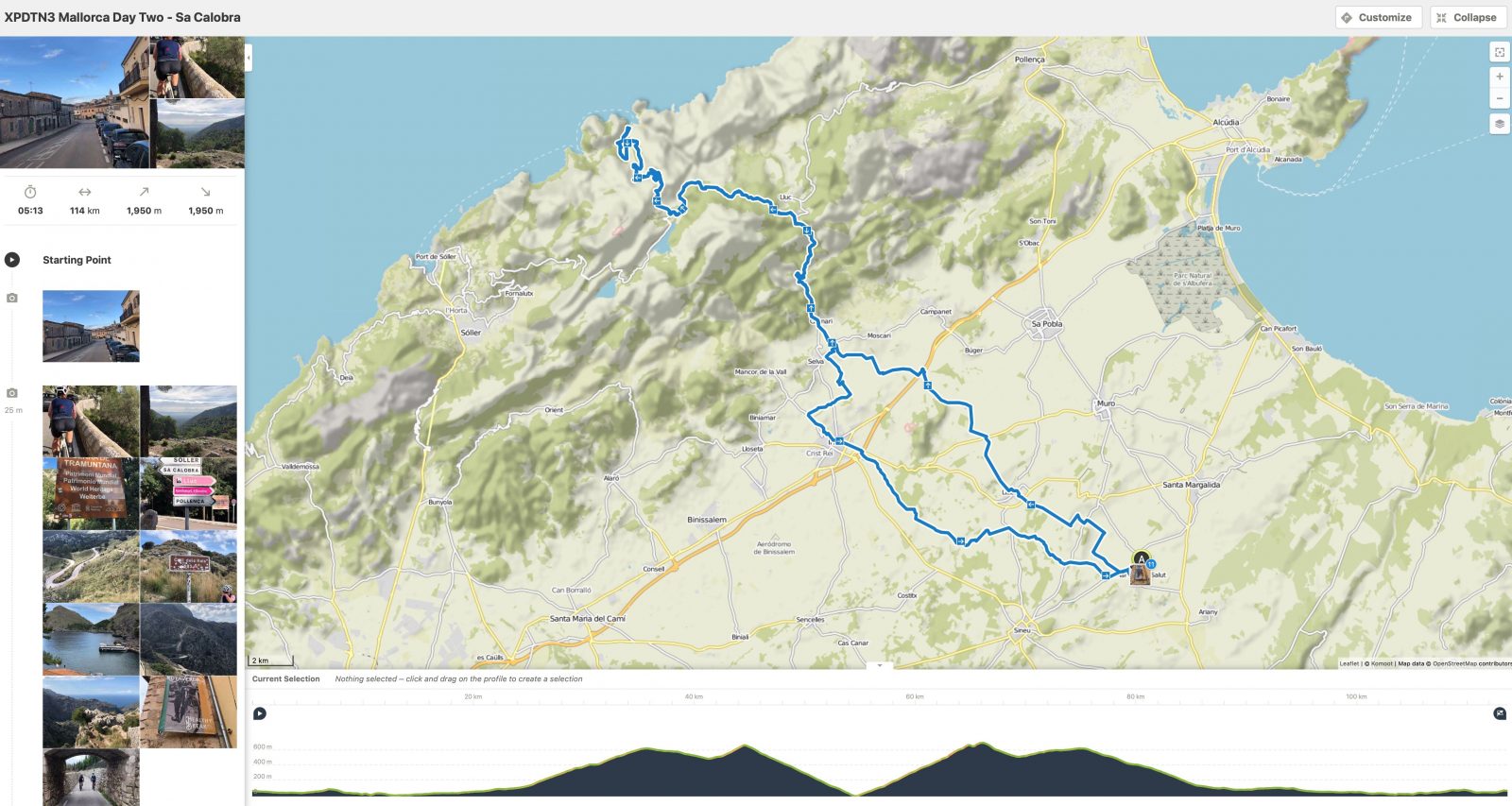 Speak to any road cyclist that has been to Mallorca, ask what were the highlights of their trip and I would bet good money that the climb of Sa Calobra is high on their list.  They may not have enjoyed it, they may have even hated every meter of it but they will agree you visit the island it is a must do. 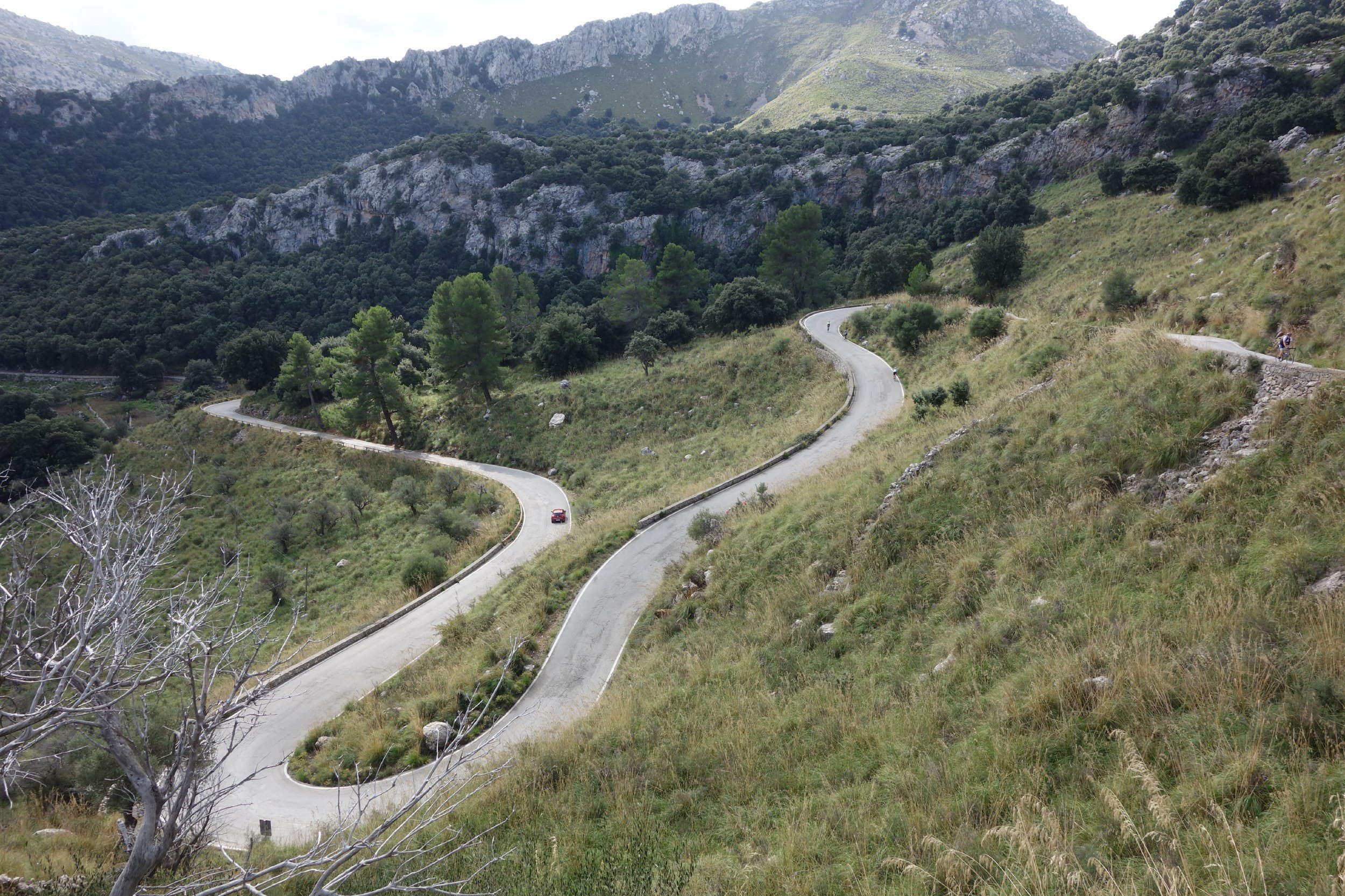 This day we were a group of 4. Myself, Ken, Fiola, and Marti. Gravel Mallorca is mapping a lot of the rideable gravel trails on the island and not only had given us the basis for our rides but also been responsible for designing the course of Toros De Gravel. We were truly riding many new areas not frequented by cyclists.

A much clearer day though initially, cold warmed quickly. We rode a very flat transition from the rides starts to the mountains. However, before we could even tackle the main event we had to climb the Coll de Sa Batalla. A sizeable climb in its own right and a good warm-up for what was to come. Legs and lungs were already burning as we finished this climb and began the undulating ride toward the Calobra descent. 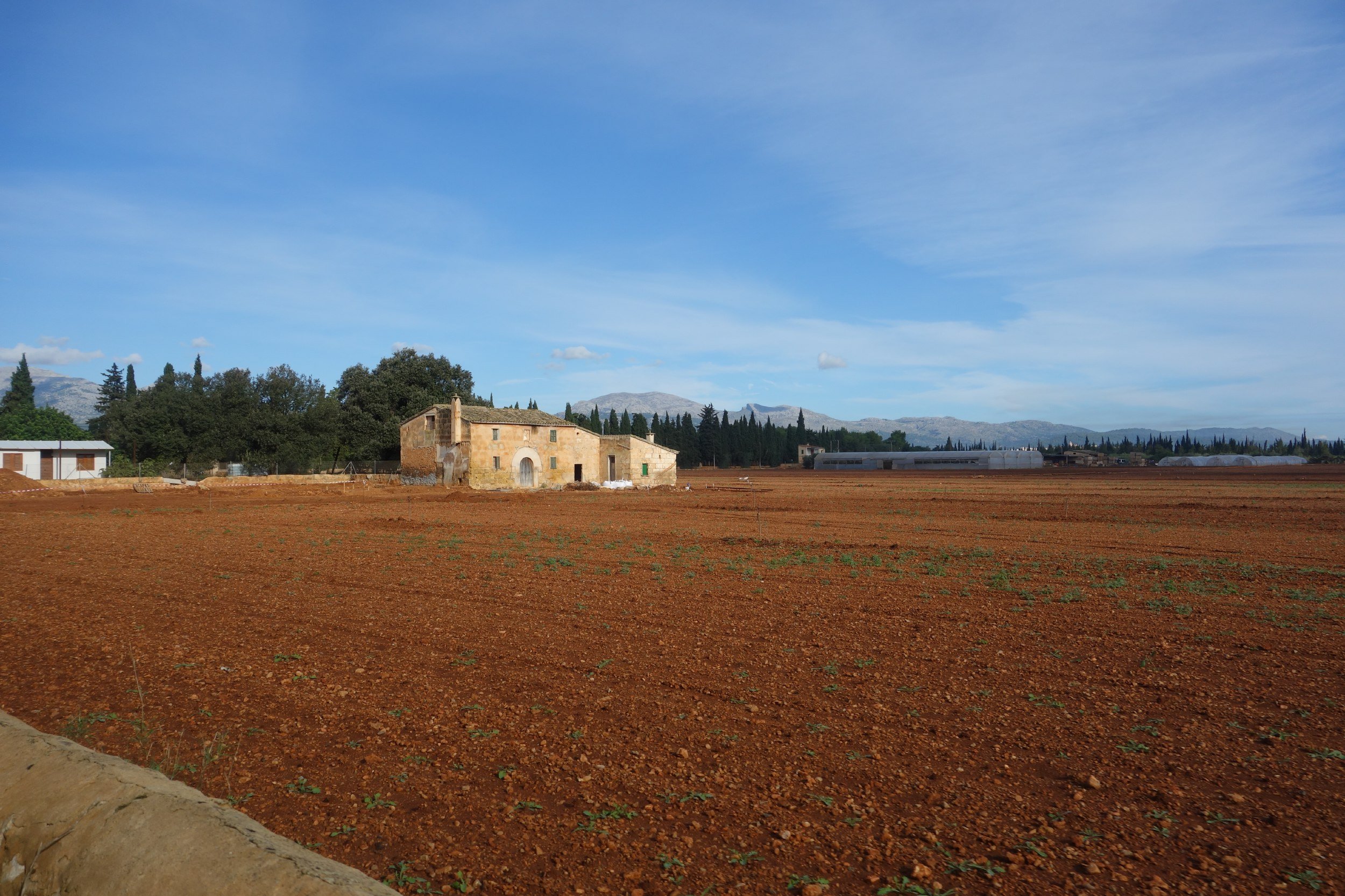 One of the cruelest things about climbing Sa Calobra and also what I think makes it special is that the climb starts in a small bay on the coast and the only way to access the start of the climb is to descend it first. Every winding turn and long straight you descend you know in the near future will have to be reversed without gravity on your side. At the base of the climb, lunch was taken in preparation, this 9.5km climb averaging 7% was not going to happen on an empty stomach. 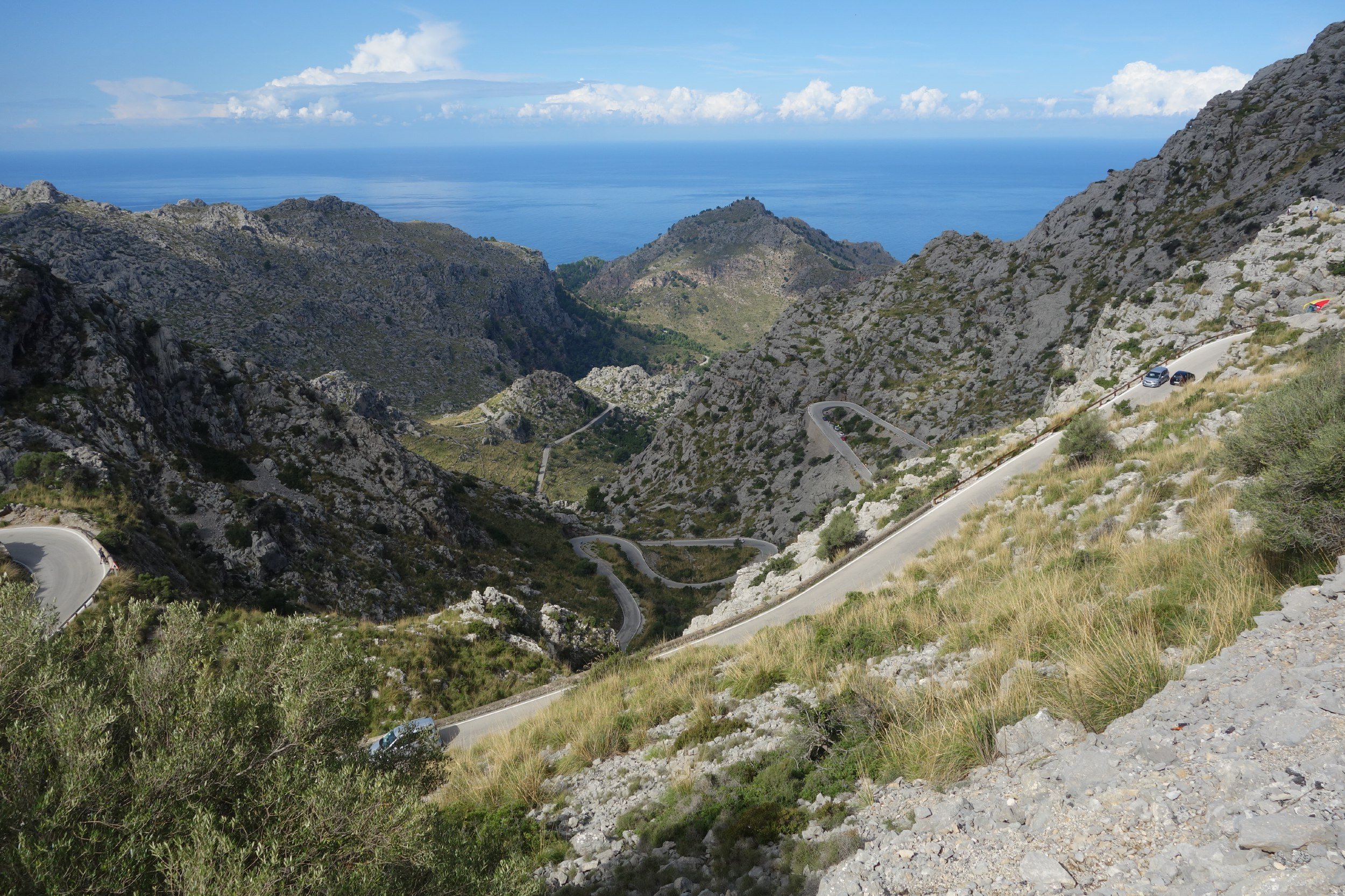 With all climbs of this nature, they are best tackled in solitude at one’s own pace and headspace. A happy place was found as I spun up the climb mentally noting how adapt and comfortable gravel gear ratios were on these longer ascents. Midway my solitude was interrupted by the addition of 2 road riders I had just passed holding my wheel and from that point, the pace had to be lifted. 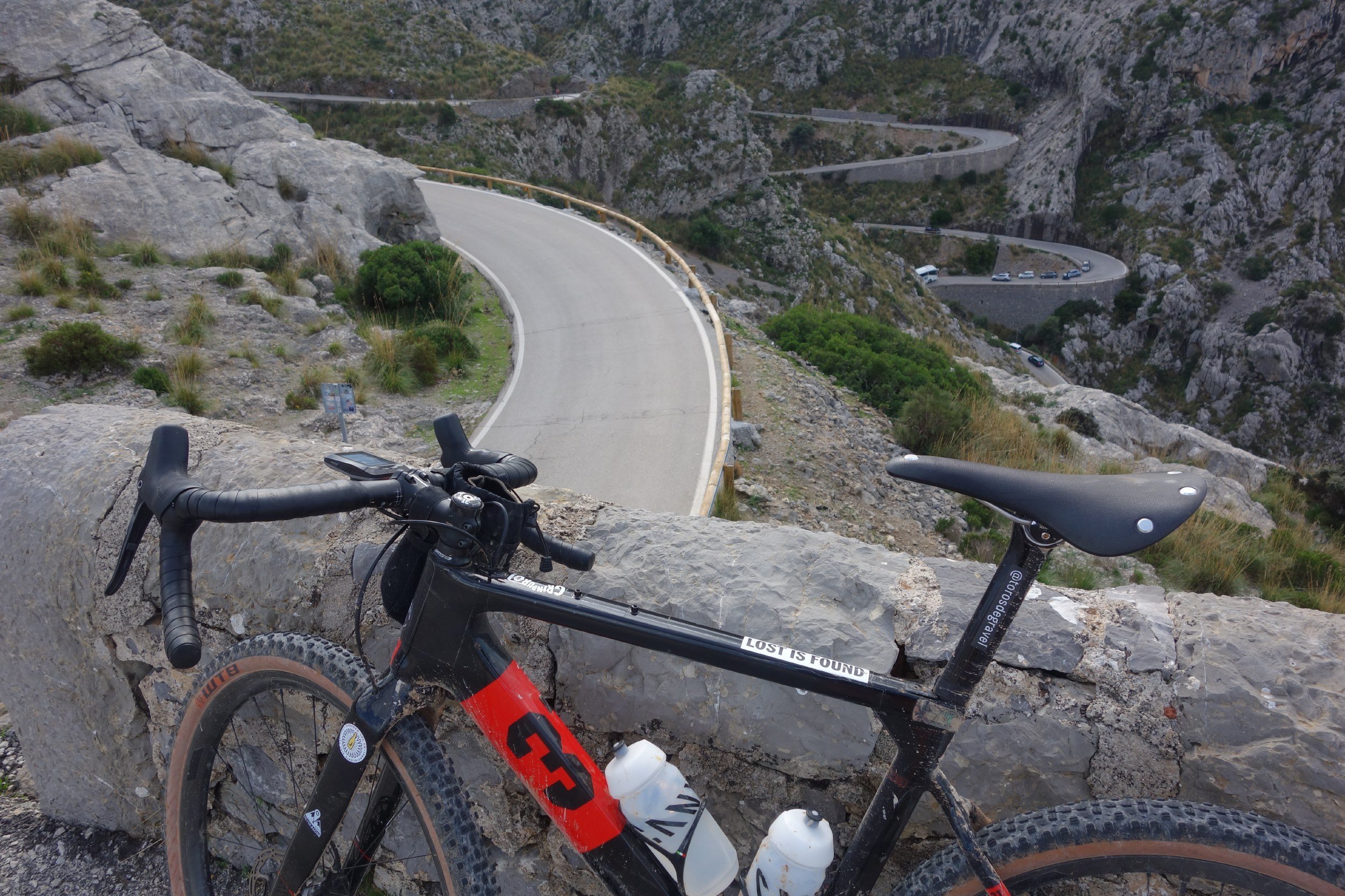 The battle of my 650x47c versus their 700x23c had begun and I was hoping come to the summit the fat kid in this group was going to win. We snaked our way up the slopes in perfect procession, they never came past and I tried to never look as if I was slowing. As we finally reached the summit of the Coll dels Reis we congratulated each other on the effort sure that as a whole we had ridden far quicker than any individual had wanted to.

The profile from this point was far more palatable. As we regrouped to make the ride back to the hotel we all felt the effort from the climbing. At the end of the day’s last long descent an additional coffee stop was needed to caffeinate sufficiently to make the last 20-30km of gravel and tarmac.

Another day, another iconic road climb and some interesting gravel had been ridden. 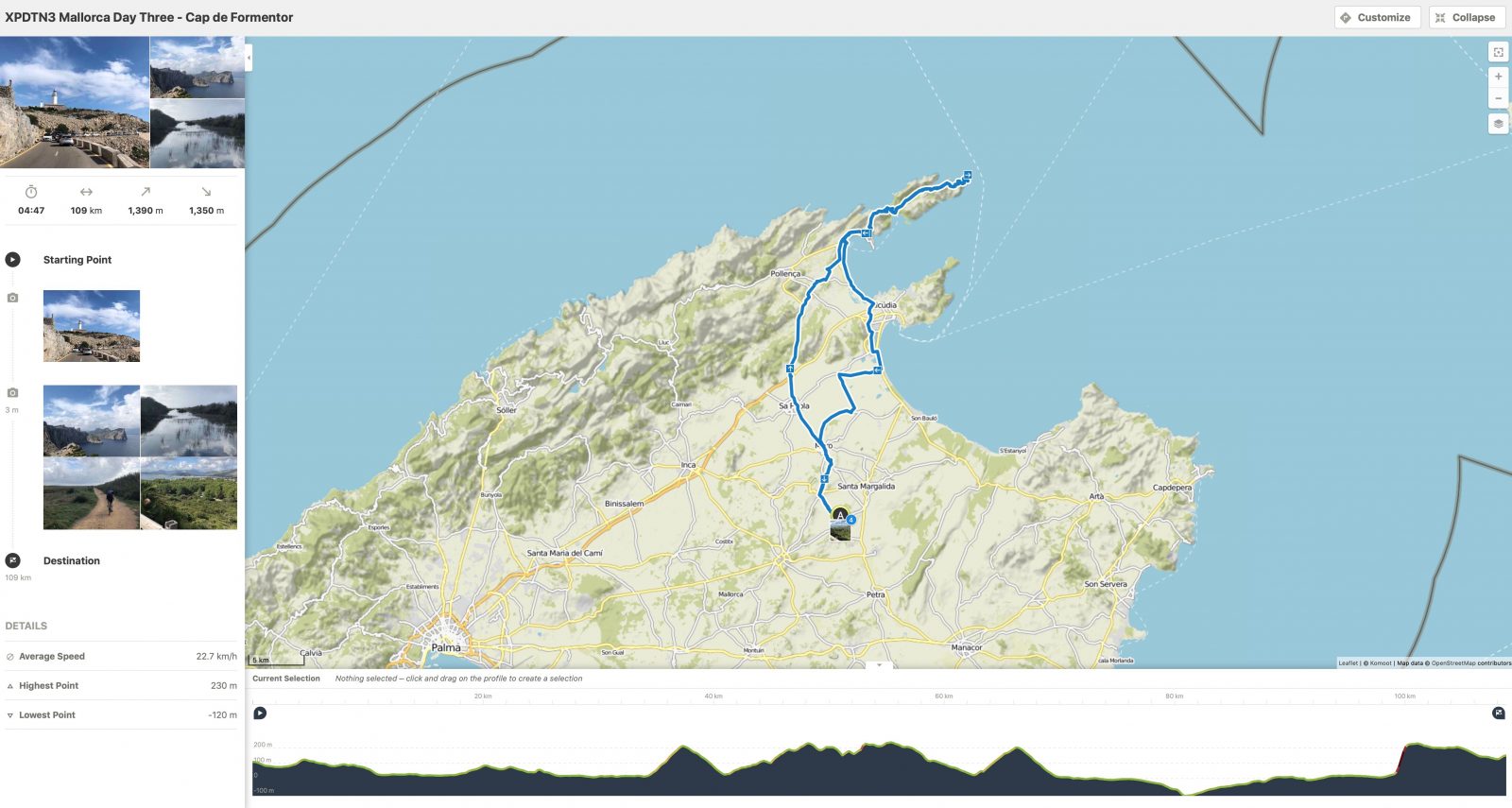 The last day of the trip would not only see us head out in a far differing direction but also ride what is probably the most beautiful piece of road on Mallorca. 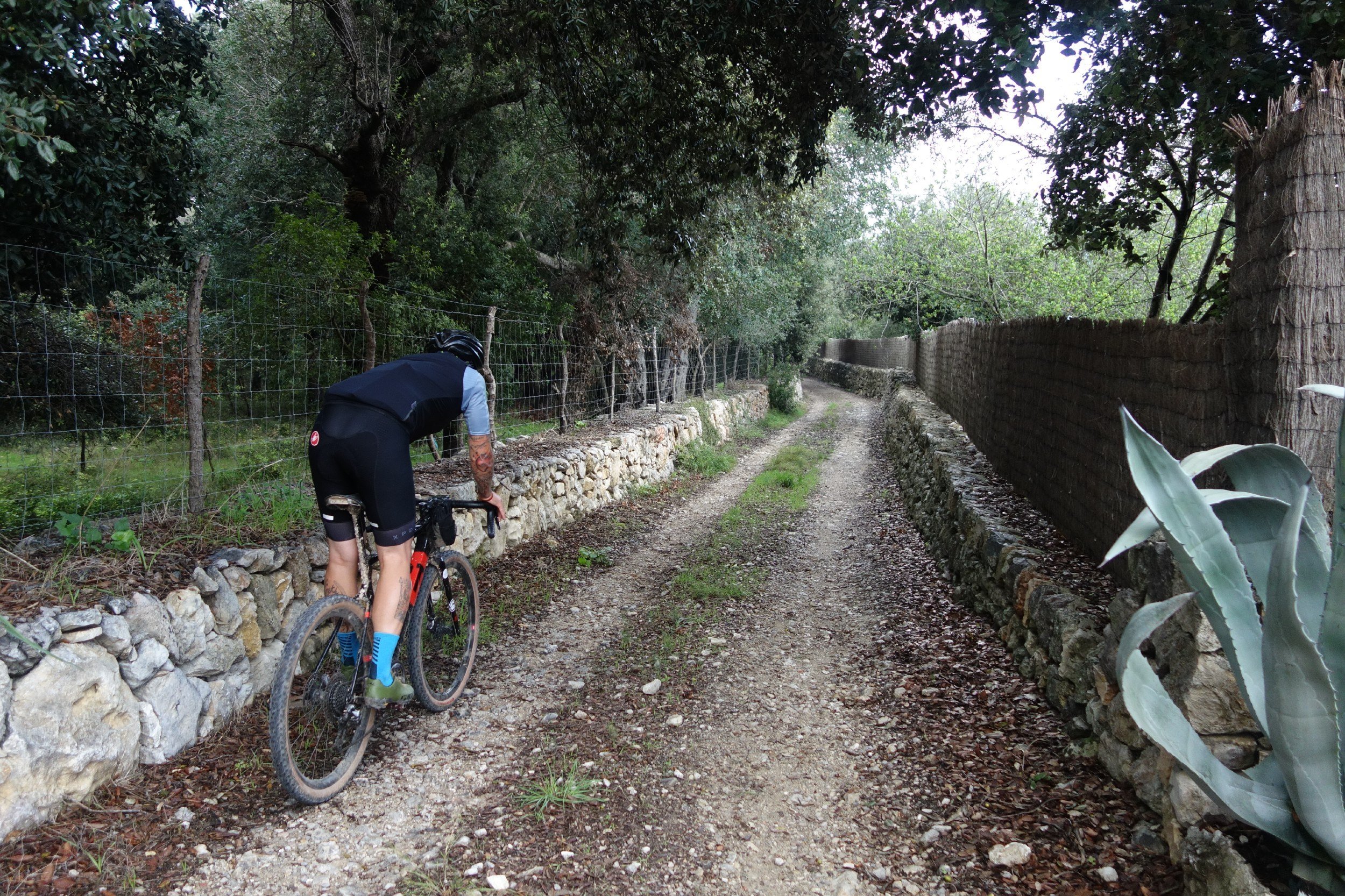 Like the road of Calobra, this winding coastal beauty was the work of a Spanish engineer, Antonio Parietti in 1930s. The curves and gradients are perfection, matched well to the stunning and dramatic coastal views.

Our ride out to the Cap was dominated by tarmac as we took a near straight route northeast to get to it. The rain that had threatened held off and we made the lighthouse on the cap in glorious sunshine and enjoyed some lunch…the experience enhanced by Ken having to fend off a curious goat keen to eat his lunch. 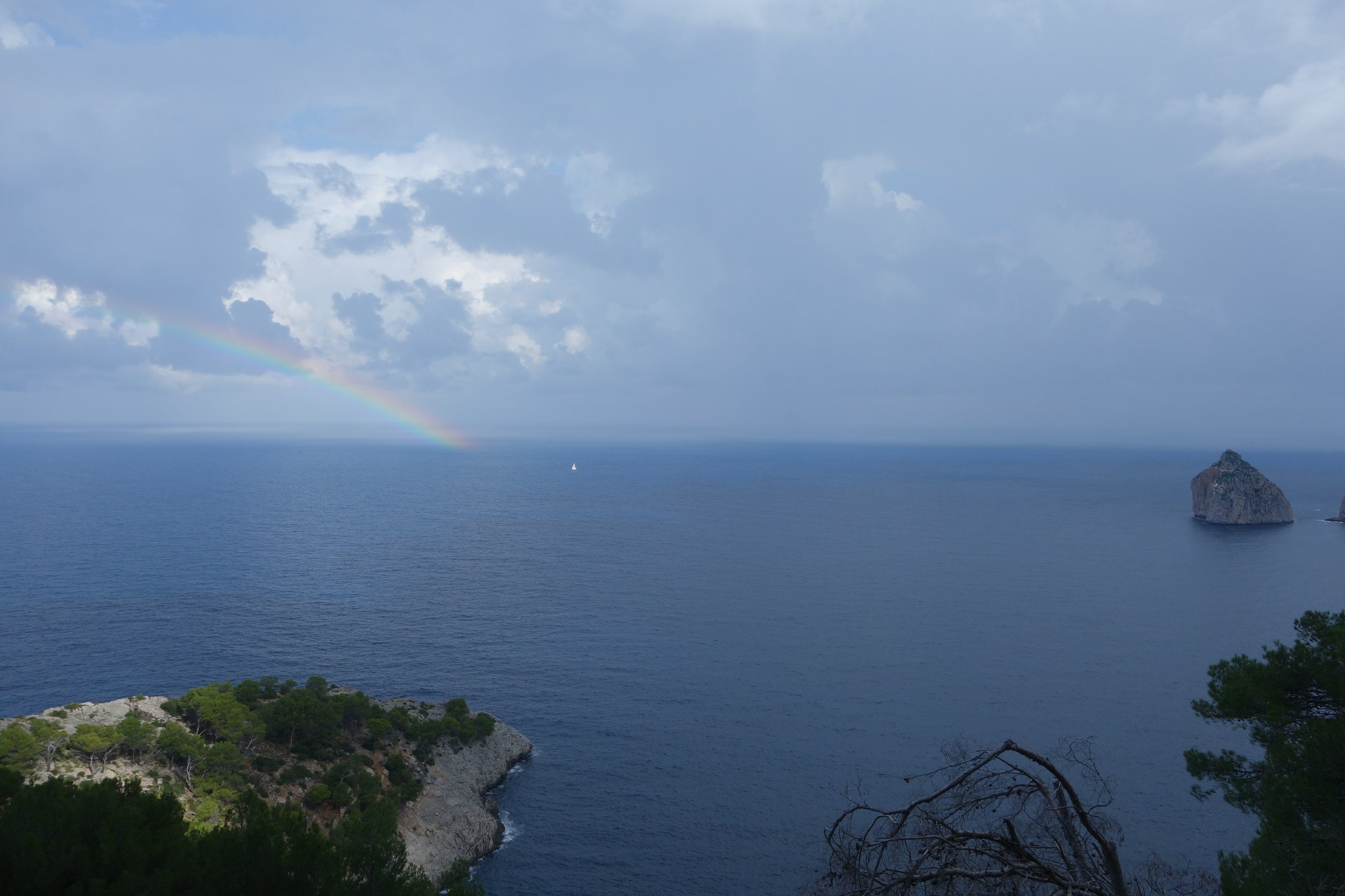 The route much like Calobra is an out and back and during the return leg, our luck with the weather ran out and light gradually becoming heavier rain set in. The descent to Puerto Pollensa was treated with care and by the time we had reach the town it had already started to flood. The roads at times were under water as we dodged between cycle and footpath to try and avoid the worst of it. 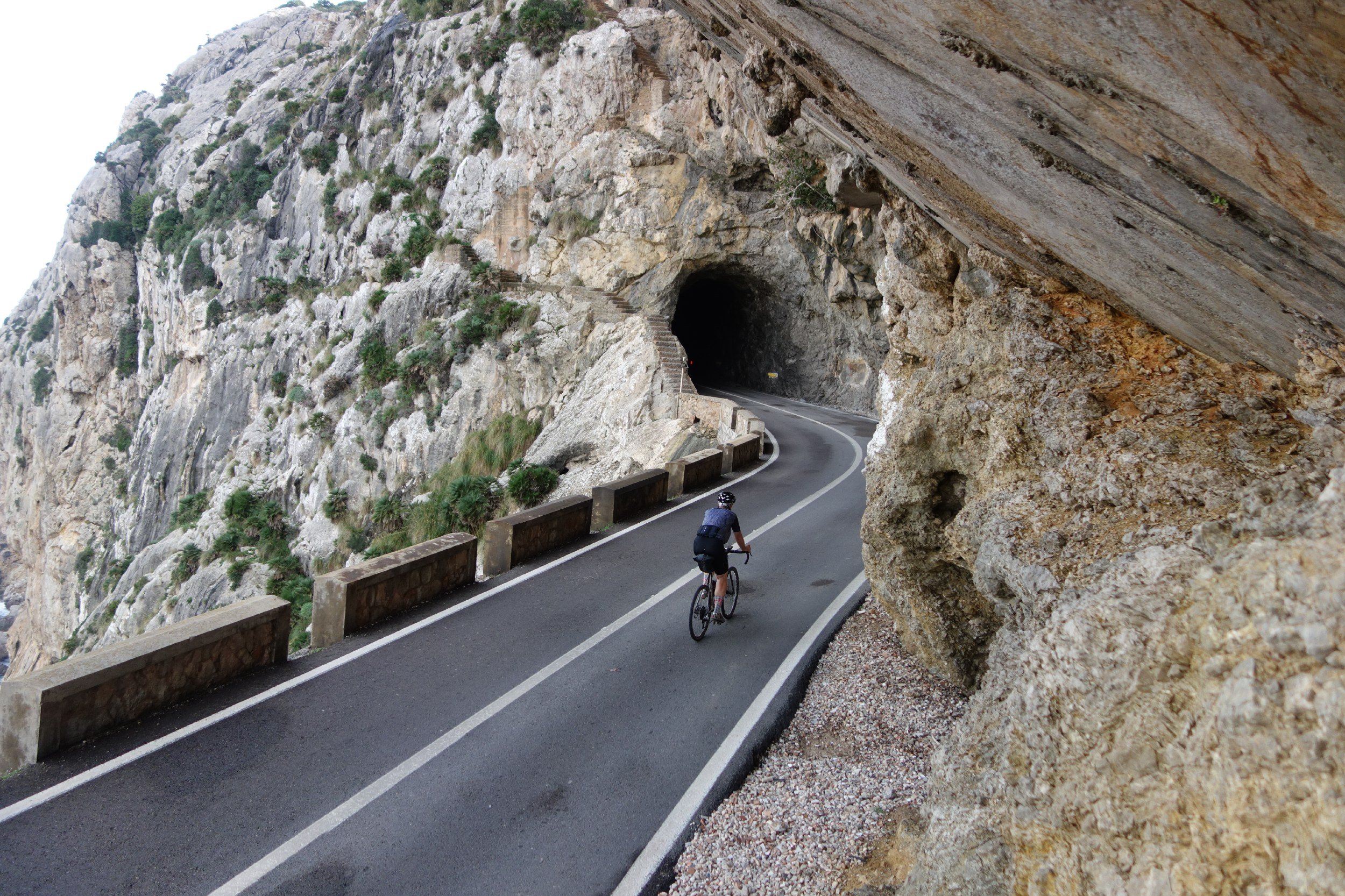 Riding towards Alcudia the weather broke and quite strangely we reached a dry and dusty trail network that obviously had been untouched by the days wet weather. 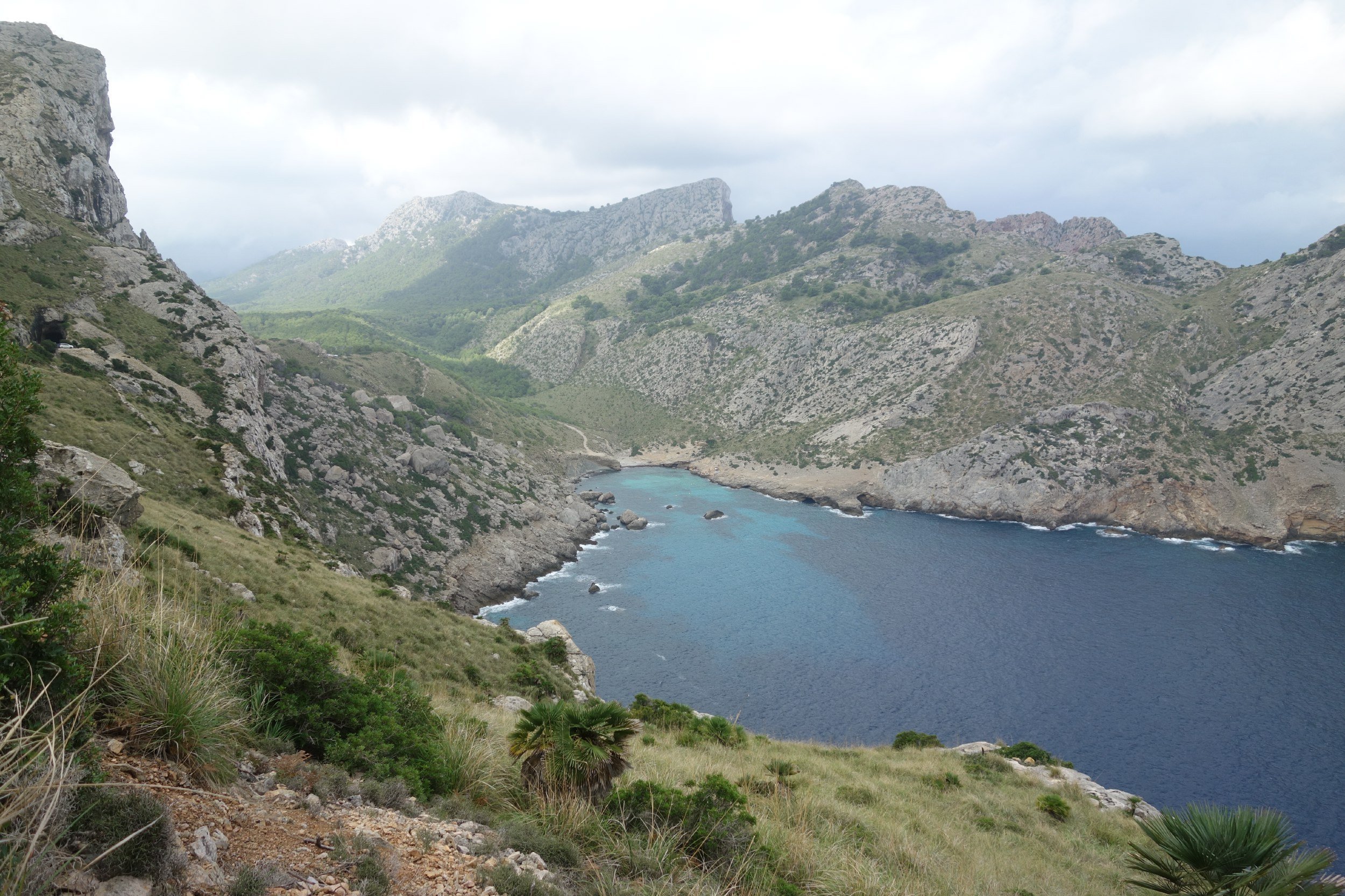 The return leg of the day was where all the best gravel had been saved. Initially, we rode inland from the coast passing through the Parc Natural de S’ Albufera de Mallorca. A wetland nature reserve with a network of gravel cycle trails. As we passed through the other side of the reserve we transitioned on to more gravel running between fields and more wetlands. An amazing departure from earlier in the day and indeed from the rest of the riding we had done up to that point. The gravel we had found and ridden on Mallorca had been outstanding. 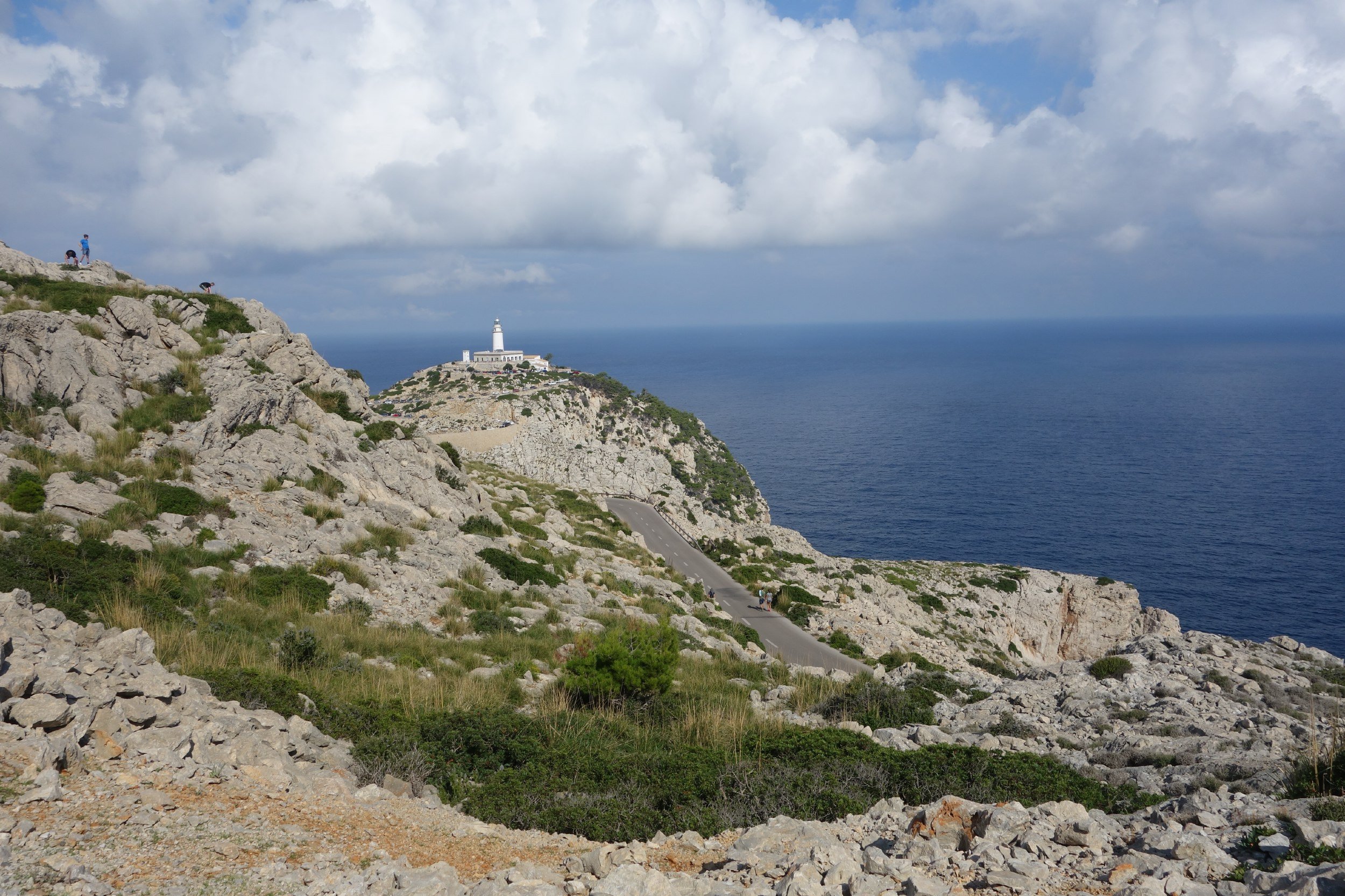 Back on to tarmac and some quiet lanes saw us again back in the village of Maria de la Salut where the sun was again shining and a welcome beer and gelato combination was needed as we soaked up the late autumnal sun in the town square. Should we had been prefixed with Mallorca’s designation as a road riding venue we would of certainly not only missed out on a huge network of primo gravel trails but also not had anywhere near as much fun with our 3T Exploro bikes. 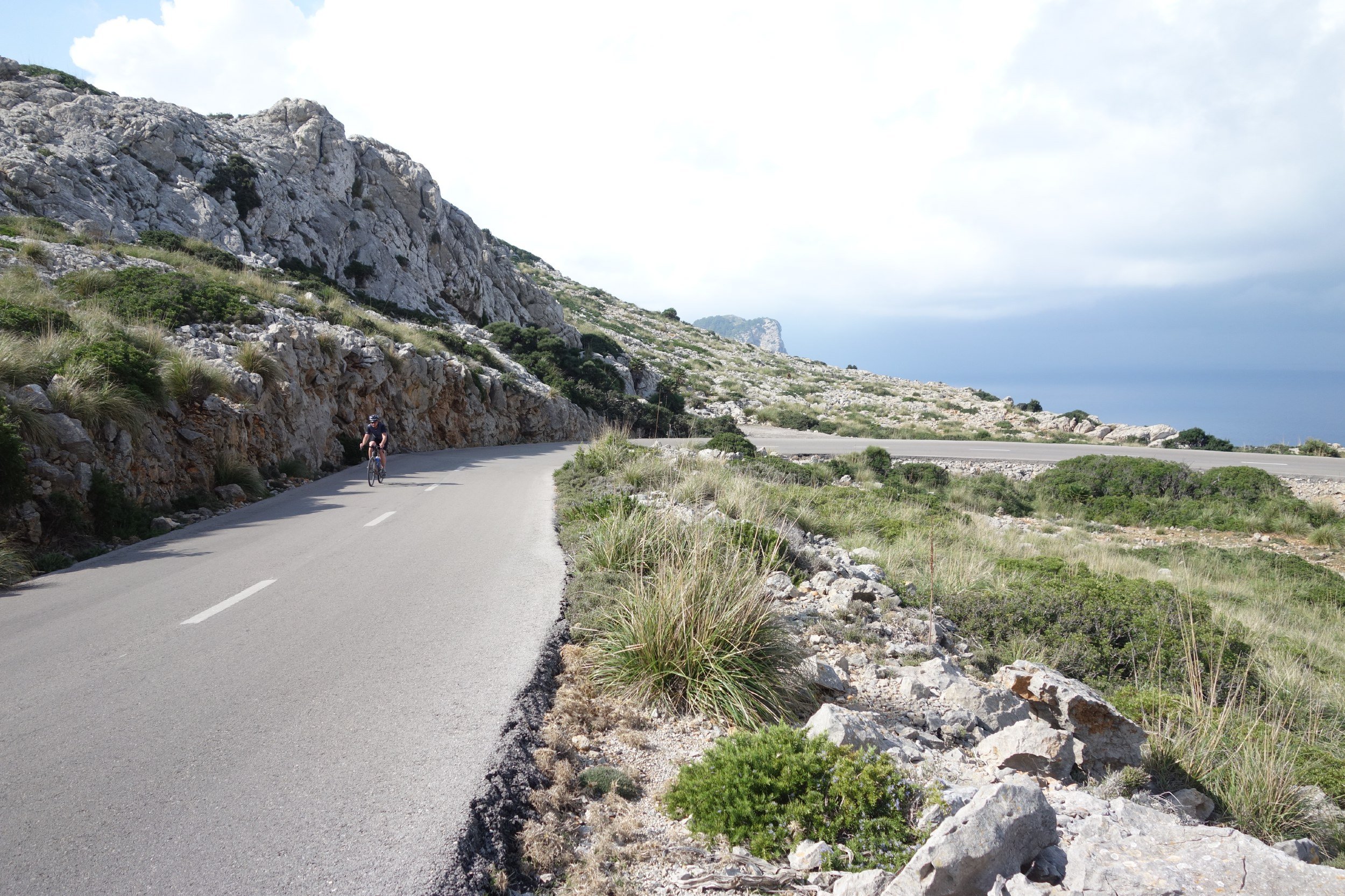 During the 3 days of riding, we had seamlessly and often transition from on road to off road without a second thought. The freedom in our route planning had known no bounds and we had enjoyed so many perfect moments of gravel bliss. Without the need for category we allow the freedom to explore and roam, new trails are found and routes developed. We are sure that in the very near future Mallorca will become as well renowned for its network of gravel trails as well as its iconic road climbs and feel sure we will not be the only fatter tires to grace those slopes in the future. 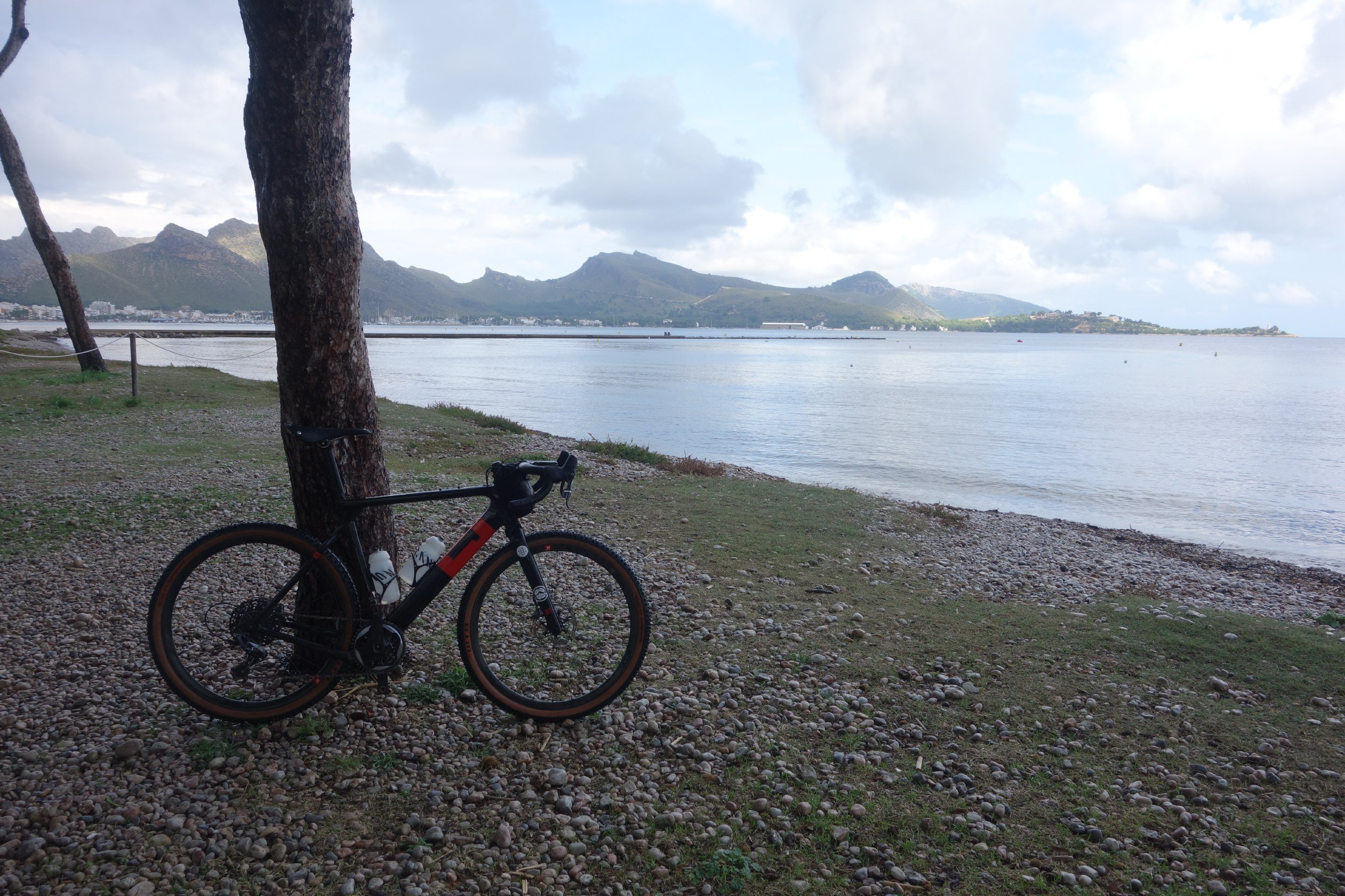 Not only is Mallorca is a popular travel destination for cyclists it is also a well frequented holiday spot for all so international flights are plentiful.  The airport is in Palma with a 45-minute taxi ride (€70) to access the central towns on the island.

There are many specialist cyclist accommodation providers but near all hotels and guesthouses welcome cyclists.

Cycling resources are plentiful on Mallorca.  There are many specialist cycle shops and cycle friendly cafes.

Best time: The Mallorca climate is good for cycling year round but utilize their good climate to ride better weather in autumn and winter when at home potentially riding is far colder and wetter.

Terrain: If you choose a location central on the island you will start your rides mostly on flatter terrain.  Head north to the mountains and expect long and sustained climbs.

Weather: The weather is consistently good for cycling, mild winters and hot summers with little rainfall (usually).  However, as we proved any weather can be expected so just sneak a rain jacket and some warmers in with your kit just in case.

Tires: The WTB Byway 650x47c offered us the versatility to ride wherever we pleased.

Gearing: The 44t front paired with the 11-42t cassette was perfect for the long climbs but also never felt under geared on the descents.

Don’t Forget: Suntan lotion. Even late in the year, the sun can be shining strong here.