That was the main idea while planning this trip. I have already been to Iceland as a (moto) tourist a few years ago, and I still remember those long stretches of road going around the whole island and had wanted to pedal the whole length of the famous “Ring Road”. While this allows you to see most of the island, it also takes at least 3 weeks of your time, and you are anyway always stuck on the paved road. At XPDTN3 we prefer to ride as far from the cars as possible (especially from those huge 4×4 Icelandic monsters) and, anyway, we don’t have a month to spare, so we decided to create a (long) weekend getaway gravel trip to Reykjavik.

If you live in Europe, flying to Reykjavik is relatively cheap and easy, and this was the foundation for this quick trip. Airlines like Wow or Icelandair offer direct flights from the main capitals, and allows you to be there in no time, ready to pedal. Another great option is to do a stopover in Iceland on a translatlantic flight, Icelandair is very generous with that.

Anyway, our plane landed in Keflavik (45 min from downtown Reykjavik) very late at night, or we may say, very early in the morning. Anyway, the ever-shining midnight sun will play games with your brain, and after grabbing our luggage and bike bags we needed our sunglasses while walking out of the terminal at 4 AM

But 4:00 AM is not the best time to get the keys from the Airbnb private home we rented in Reykjavik, so we decided to do it the “long” way, and instead of driving straight to Reykjavik, we thought it would be cool to drive around the “Golden Circle” to visit some of the main tourist attractions of the area, like the famous Geysir, the huge Gullfoss waterfall andthe historic Thingvellir area. It takes about 5 hours to do this loop, but if you have the extra time, it will allow you to have a glimpse of some of the most famous landmarks in Iceland. And the midnight sun will be shining high, so don’t worry it’s 4 AM as there will be plenty of light!

Once in Reykjavik, our host Rakel handed us the keys of our amazing Airbnb home in downtown, a 2 story old house in Reykjavik’s main street, complete with parking lot, basement for the bikes and a concert piano… Later that day, Rene Wiertz and his friend Rene Savelsberg joined us after a later flight connection from Amsterdam. Unfortunately Mr. Savelsberg suffered an injury a few days before flying, so he could not join us for the ride, but will still amuse us with his piano and cooking skills. 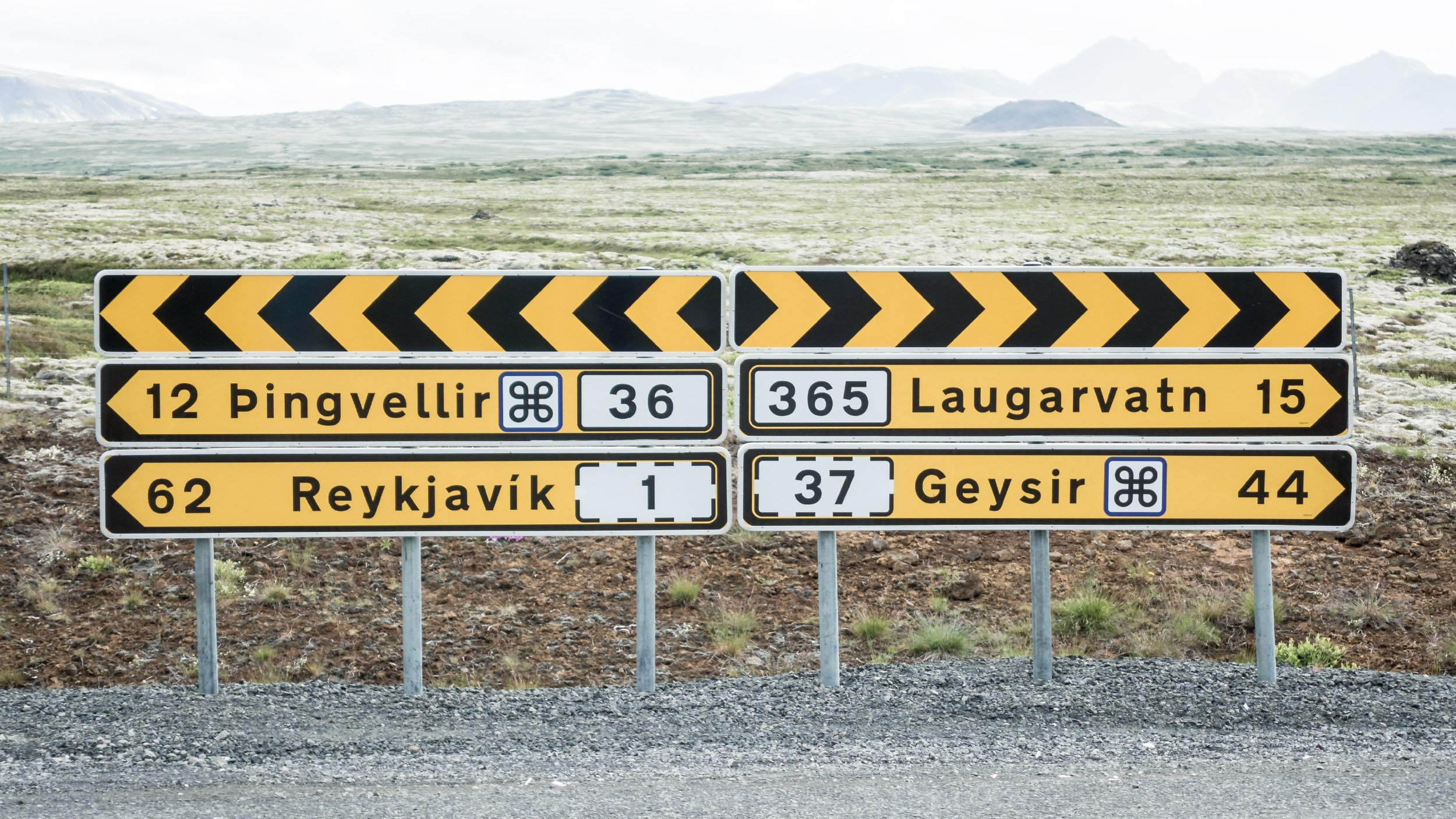 On the morning of our first day, we met our friends at Lauf forks in their offices down the street, to discuss the route for the day, and to install one of their new GRIT gravel fork on Rene’s Exploro, set up with 27.5 x 2.1 Nano WTB tyres. A real GravelPlus machine! After as nice breakfast at Sandholt, that in Iceland combines raw fish with capuccinos, we set off, and little did we know we were going to be riding amazing smooth singletrack in just 20min. After following some bike paths we came to this forest in the Heidmörk area, where a network of trails and singletrack had us grinning and screaming for kilometers. Its amazing how close those trails are to the city center, and the sense of being outdoor after just riding for 20 min from our breakfast restaurant in Reykjavik main street.

With Rene, Marcel and me, plus almost all the Lauf crew, we launched an “Exploro” train full gas down those trails, only stopping to grasp some air or shooting some pictures under a cloudy sky and perfect temperatures. To make it even better, that network of singletrack were connected with double track perfect fast gravel roads, that had us sprinting 40km/h to the next head of the next trail. After a few races, near crashes and lots of fun, those trails led to a gravel road surrounded by a sea of dry lava rivers, covered in the most lush soft moss you’ve ever seen. Like walking on clouds. The scenery made for a lot of stops for pictures and video, while the younger kids Marcel and Nick kept doing sprint intervals up the short hills on the area. Kids… 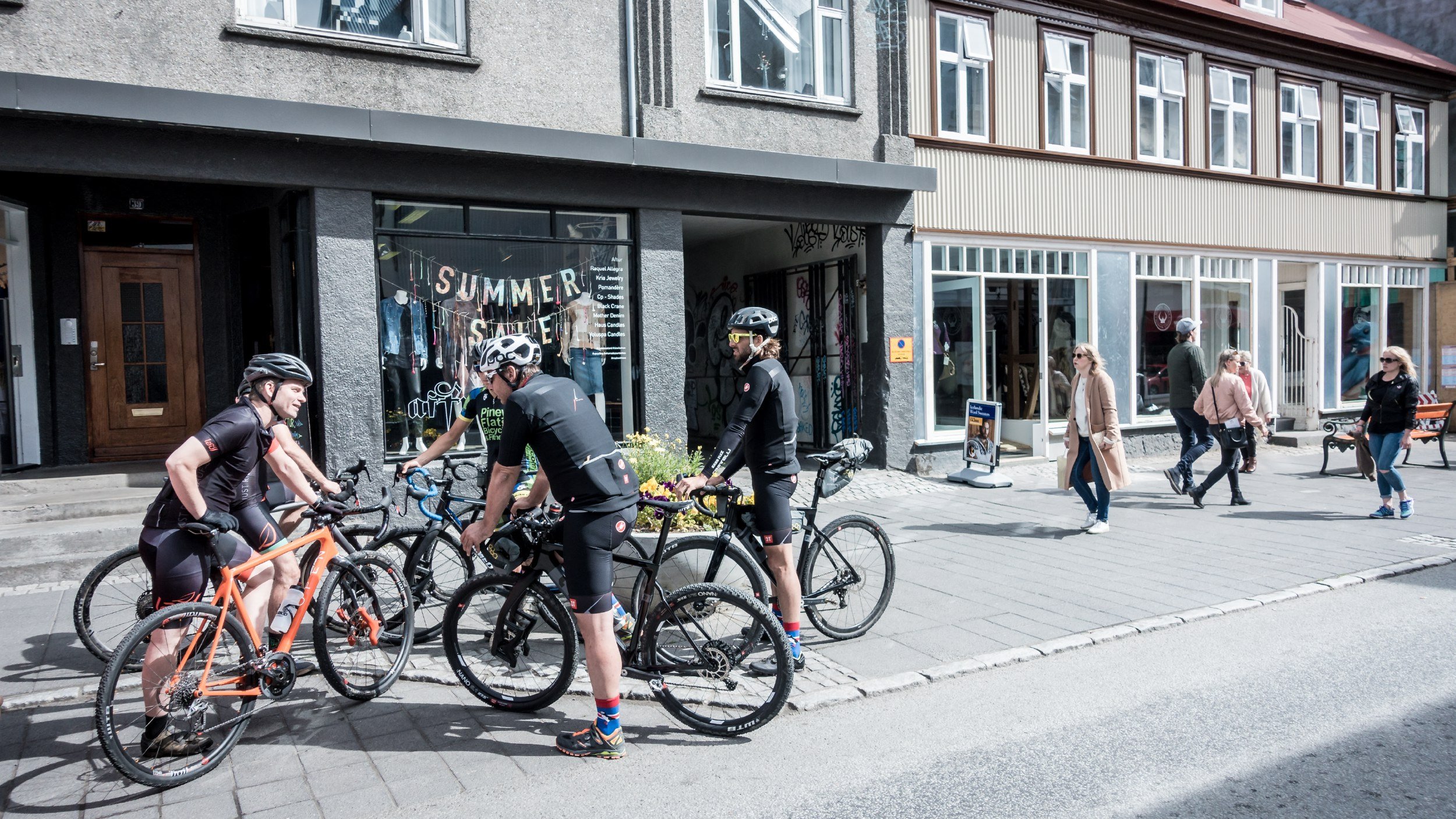 The route for today was basically some of the most ridden trails by our friends at Lauf, the kind of rides they usually do straight from the office, and I can tell you those trails are world class, and the perfect fit for a GravelPlus bike. Marcel and me were riding 700×40 and Rene went GravelPlus with 27,5×2.1 for a bit of extra comfort on the rougher sections, and the bike was flying on double or singletracks 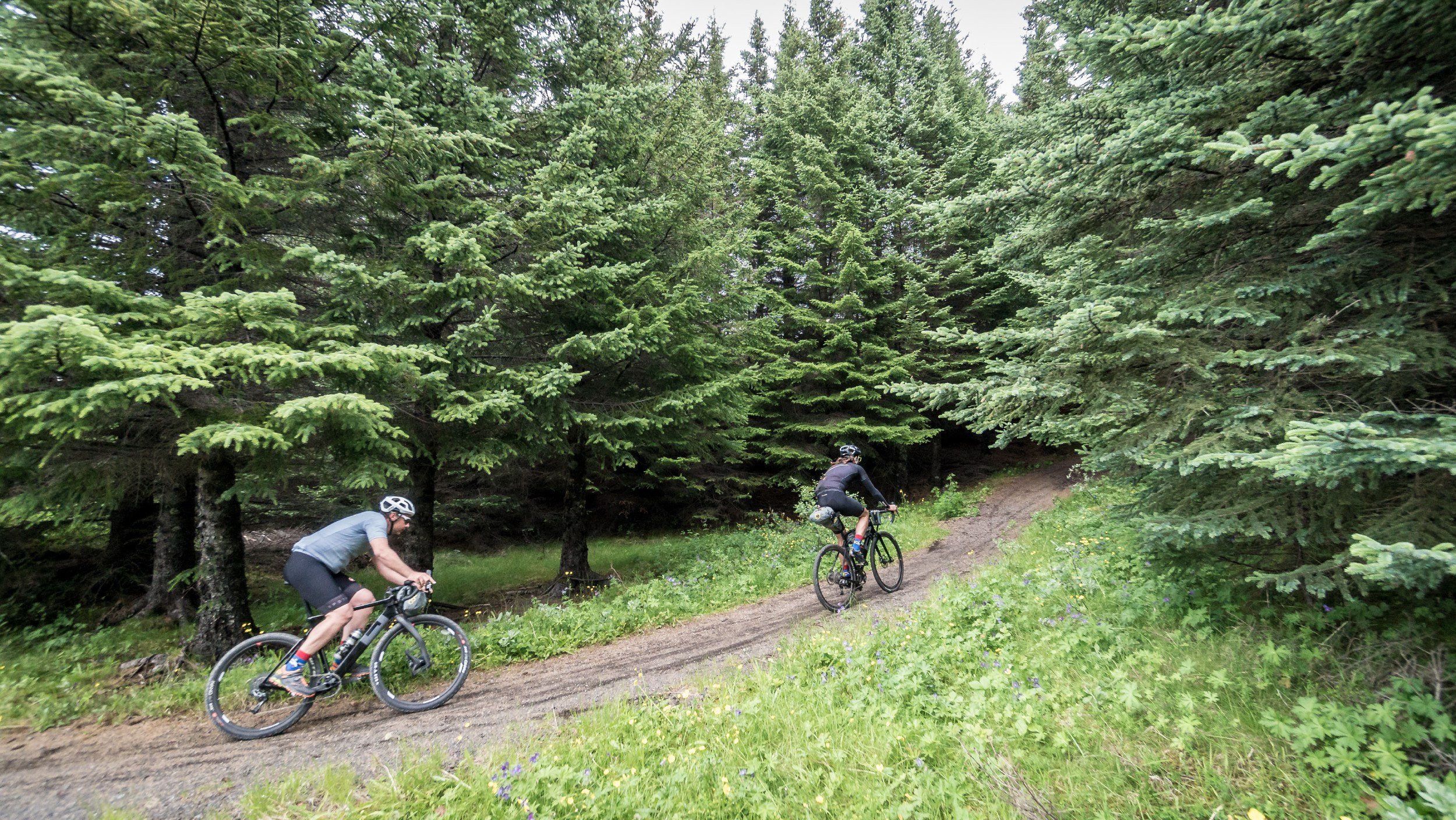 Almost at the point of the Reykjavik peninsula we decided it was time for a quick food stop, but after failing to find a good place for a sandwich, Benedikt and Bergur told us ice-cream was one of the most popular foods in Iceland, even in the winter. So we didn’t want to argue with that, we are always up for a good gelato, and we found an “Isbud” ice cream shop, where the smallest ice-cream was the size of Texas… If you see a Isbud sign while in Iceland, stop.

The route back to Reykjavik downtown was fuelled by chocolate, M&M and caramel syrup, and after passing through a couple of impressive neighborhoods, just by the sea, we raced the last bits of singletrack before following the bike path that goes all along the coast, close to Reykjavik’s domestic airport and that drops you just in the middle of the city. Well, not happy with the Vatnajokull sized ice cream, we still managed to stop in the harbour to test the also famous Fish & Chips, a tradition imported from the UK.I t tasted like heaven watching the ships go by and the seagulls screaming on top of our heads. 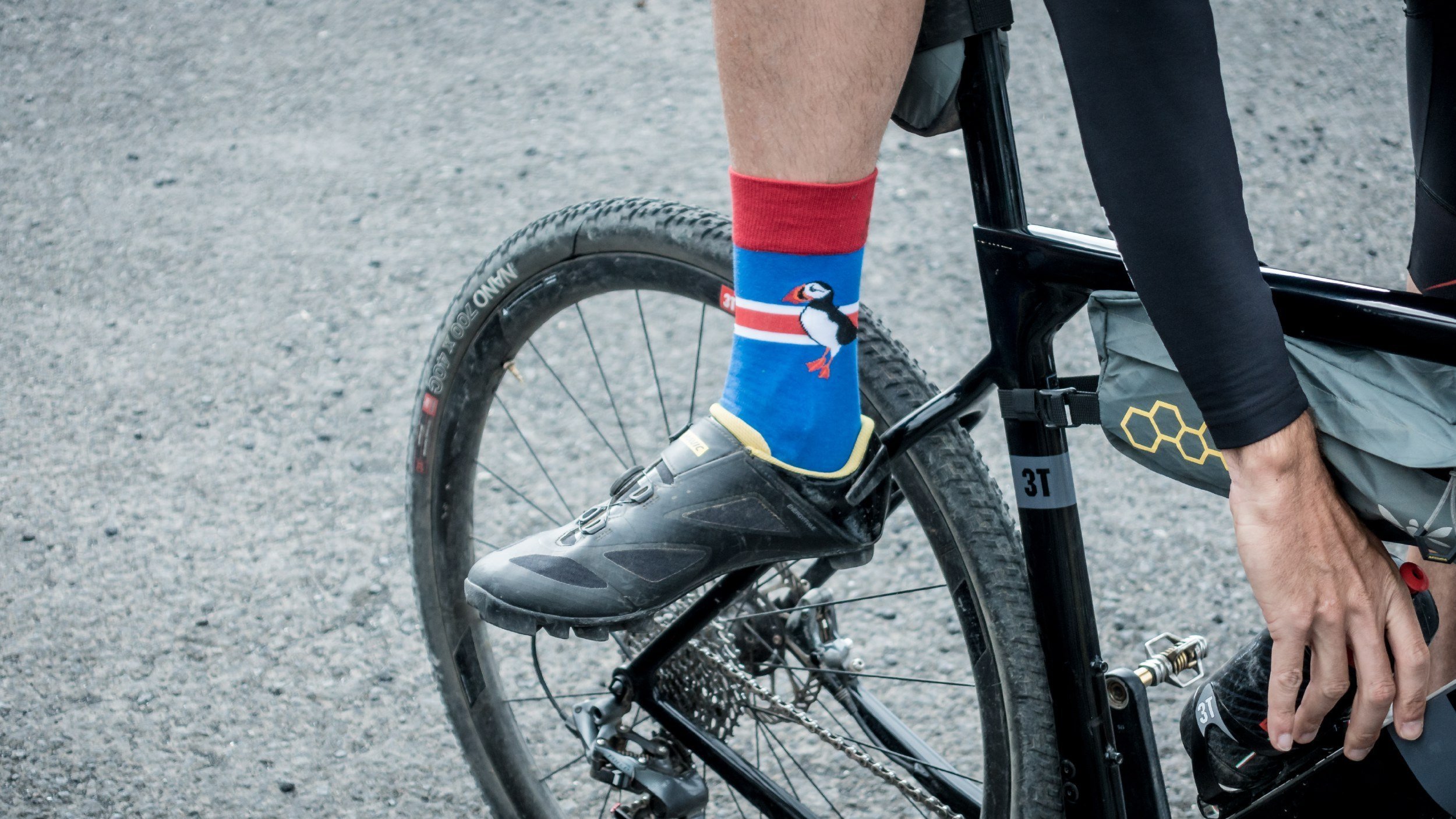 Our first day in the peninsula was super fun and even if short, our legs were hurting from so many sprints on the gravel roads and races on the forest singletrack. But we decided we wanted something longer, more epic for the second day. You want “Epic”? Bergur at Lauf asked. “Ok. Bring your swim shorts”. Bergur hopped on his trusty steel gravel bike to guide us to Hvaragerdi, a famous hot springs destination on a loop that should be around 100-120 km on gravel roads. Lets take an energy bar just in case…The truth is that on the first part of the route we could not avoid having to ride a few kilometers of paved roads, but that’s the beauty of a gravel bike. Even with knobby WTB Nano tyres, we had no problem riding at 30-40km/h until we reached the dirt again.

After the asphalt stretch we stopped at a gas station cafe for a snack, and suddenly right after that, we reached the most technical part of the whole trip. A service gravel road leading to a geothermal station that put our 700×40 tyres on the limit. 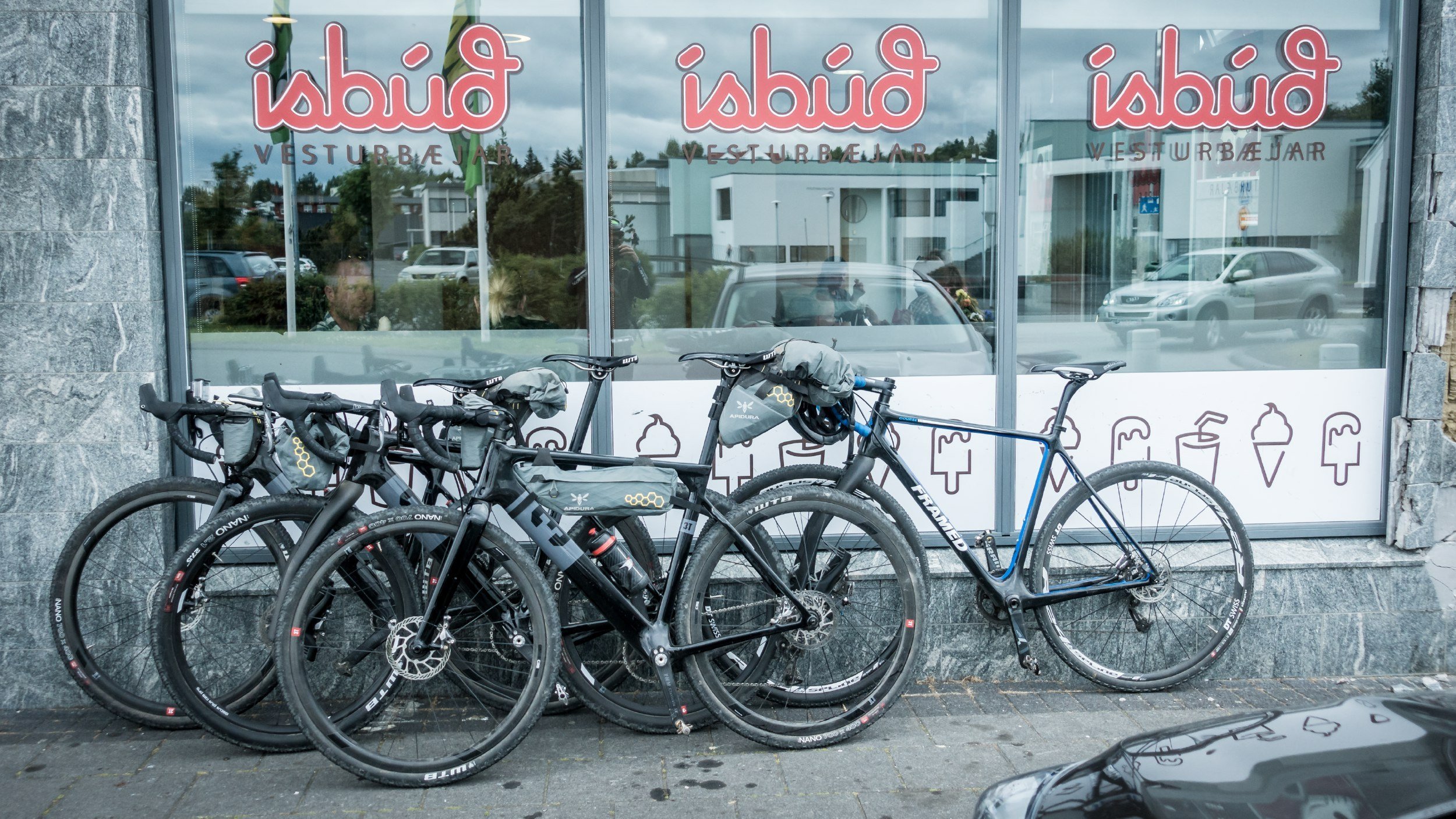 Rene was happy with his 27.5 x 2.1 and Lauf fork, while Marcel and I struggled to keep up and try not to loose traction on the loose rocks. It was tough and felt long on our 10km/h average, but the landscape was unique, with smoke coming out of the mountain, making you feel alive, and part of a primitive scenery, unspoiled and raw. After some GPS navigation we finally found the entrance to the Reylkjadalur hot springs, in a narrow and beautiful valley that made us stop for a few minutes of video and pictures. Smoke all around and the contrast between the brown rocks and the green moss made that place something to remember. And something to remember was also the super steep and rocky downhill that waited for us before we could get our bodies in the relaxing water for mother nature. That steep track claimed a few inches of skin and a few funny crashes, but we all made it to the end, ready to relax and get warm in the water (it was getting pretty cold at that point). 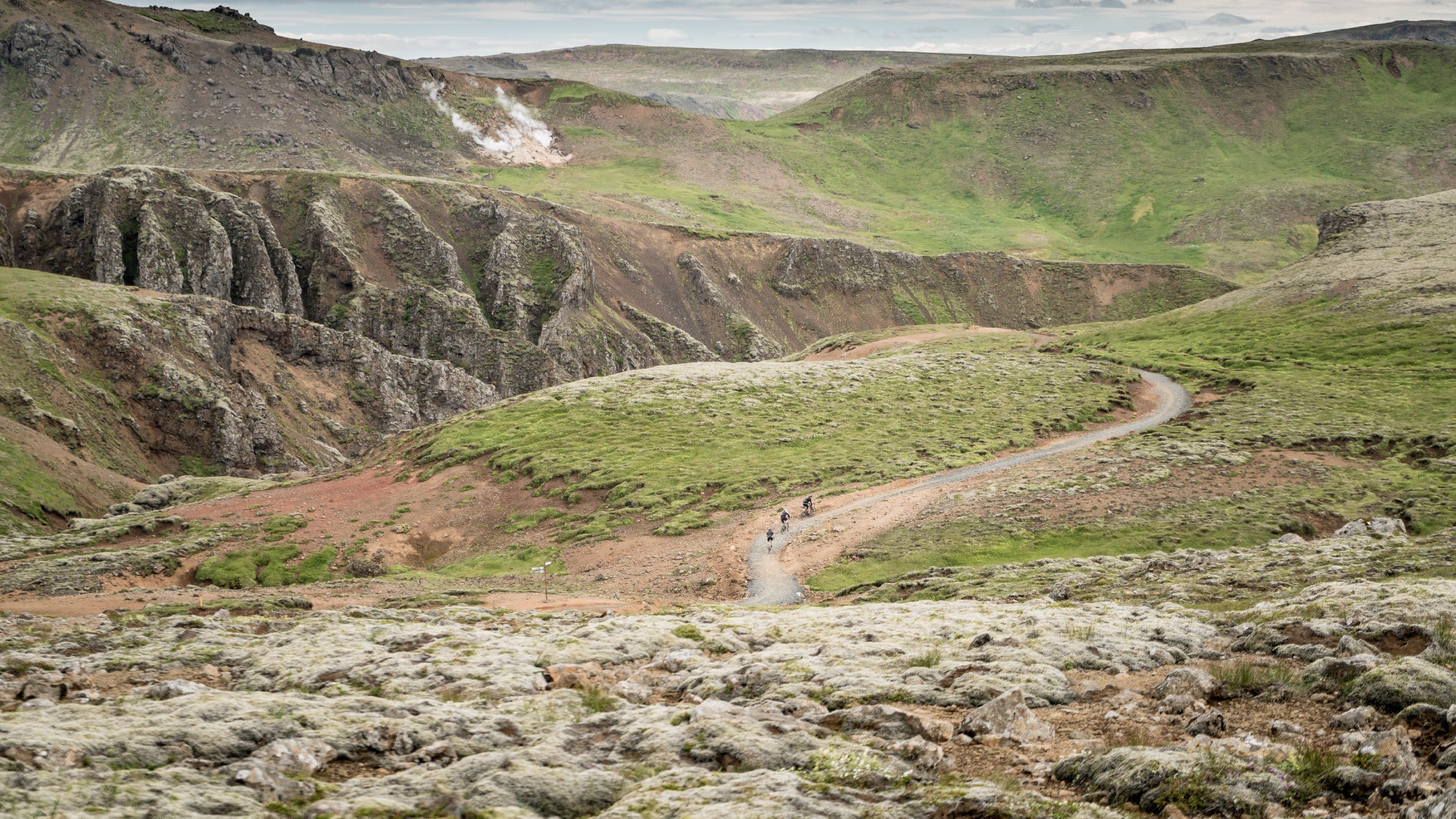 And something to remember was also the super steep and rocky downhill that waited for us before we could get our bodies in the relaxing water for mother nature. That steep track claimed a few inches of skin and a few funny crashes, but we all made it to the end, ready to relax and get warm in the water (it was getting pretty cold at that point). 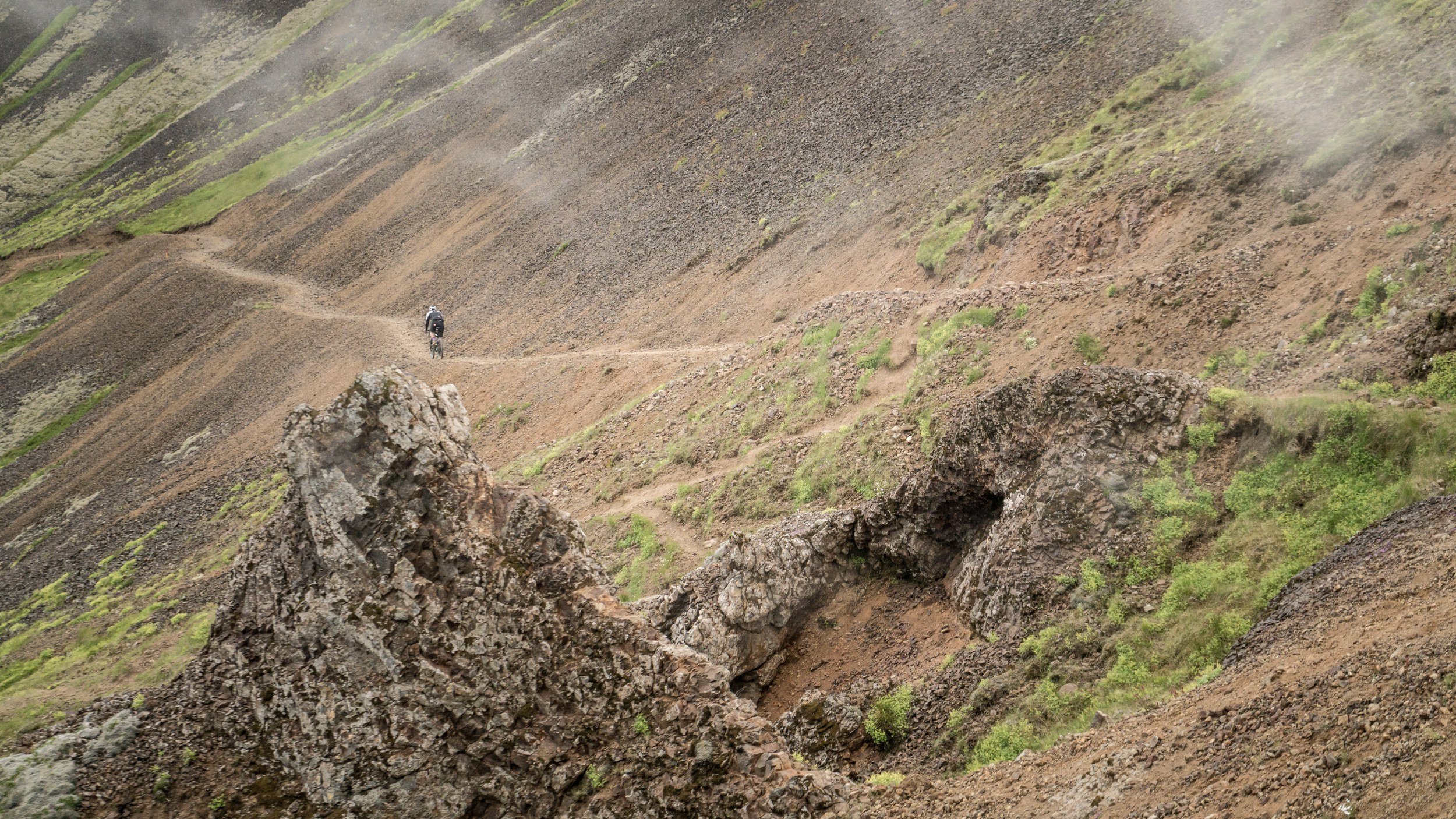 It turned out the water was super warm! and it took us like 5 minutes to just put more that our feet in the water….but once we were all in there, the feeling was amazing, with the smell of sulphur and the clouds dropping some drops of rain on our heads… 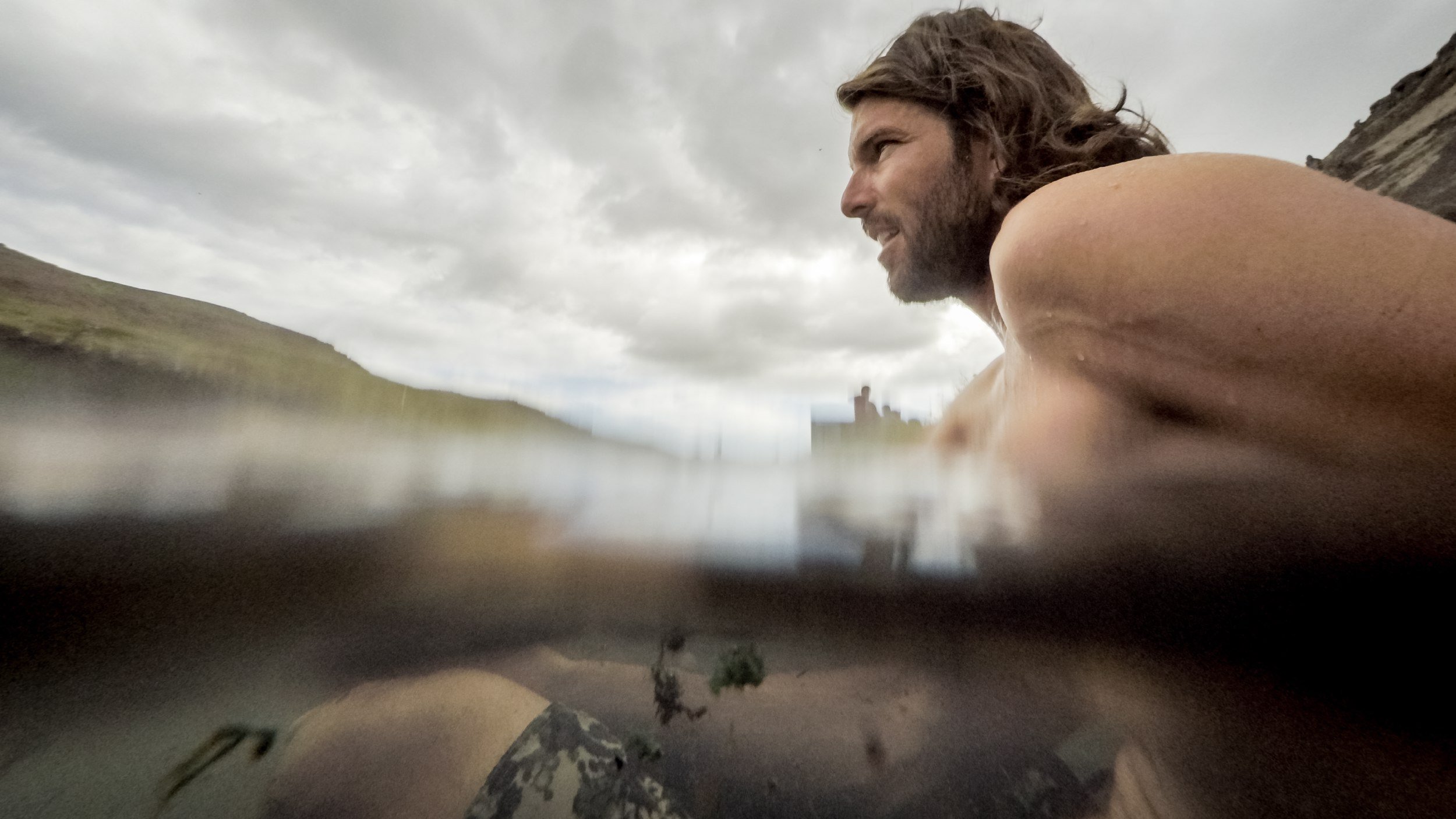 After the therapeutical bath, swim shorts back in our Apidura packs, there was still another surprise, in the shape of a perfect singletrack descent from the hot springs, leading to the town of Hvaragerdi , where sandwiches and pizzas were waiting for us. 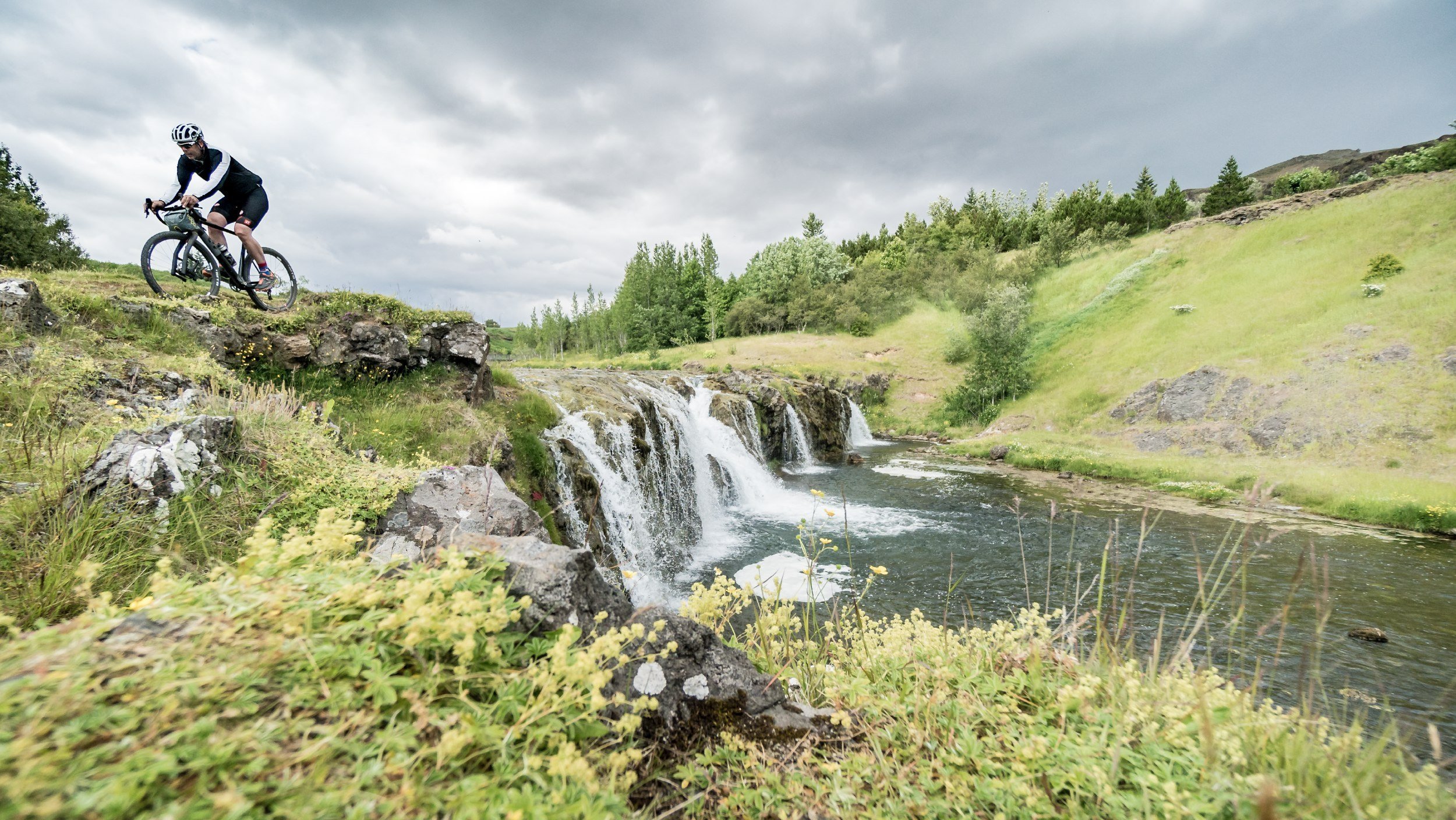 We knew we’d better stock up on carbs here, as we were still in the middle of our route, and 50km waiting for us on the way back to Reykjavik

After navigating our way back on the southern part of the Peninsula, and testing again the capabilities of the Exploro bikes on the asphalt for a while, we reached Reykjavik tired but happy, smelling of sulphur and ready for night in the city before flying back to the office on the next day. A perfect weekend?

ENJOY THE REST OF OUR PHOTO GALLERY HERE:

We designed this trip as a weekend getaway to ride gravel in a exotic location. You don’t have to spend 3 weeks to have a taste of this fascinating country. If you live in Europe, you can get a cheap and not-so-long plane to Reykjavik, and spend a couple of days there riding smooth singletrack, perfect gravel roads and swimming in hot waters. Ready to go back to office on Monday if you plan it well . Of course, the trip will work best as a “long-weekend” trip, lets say 3 or 4 days, so you have more time to transfer in and out,  and maybe also do the Golden Circle tourist loop that brings you to the main tourist hotspots close to Reykjavik (Gullfoss Waterfall, Geysir, Thingvellir, etc etc)

Download our GPS tracks at Komoot and go ride! 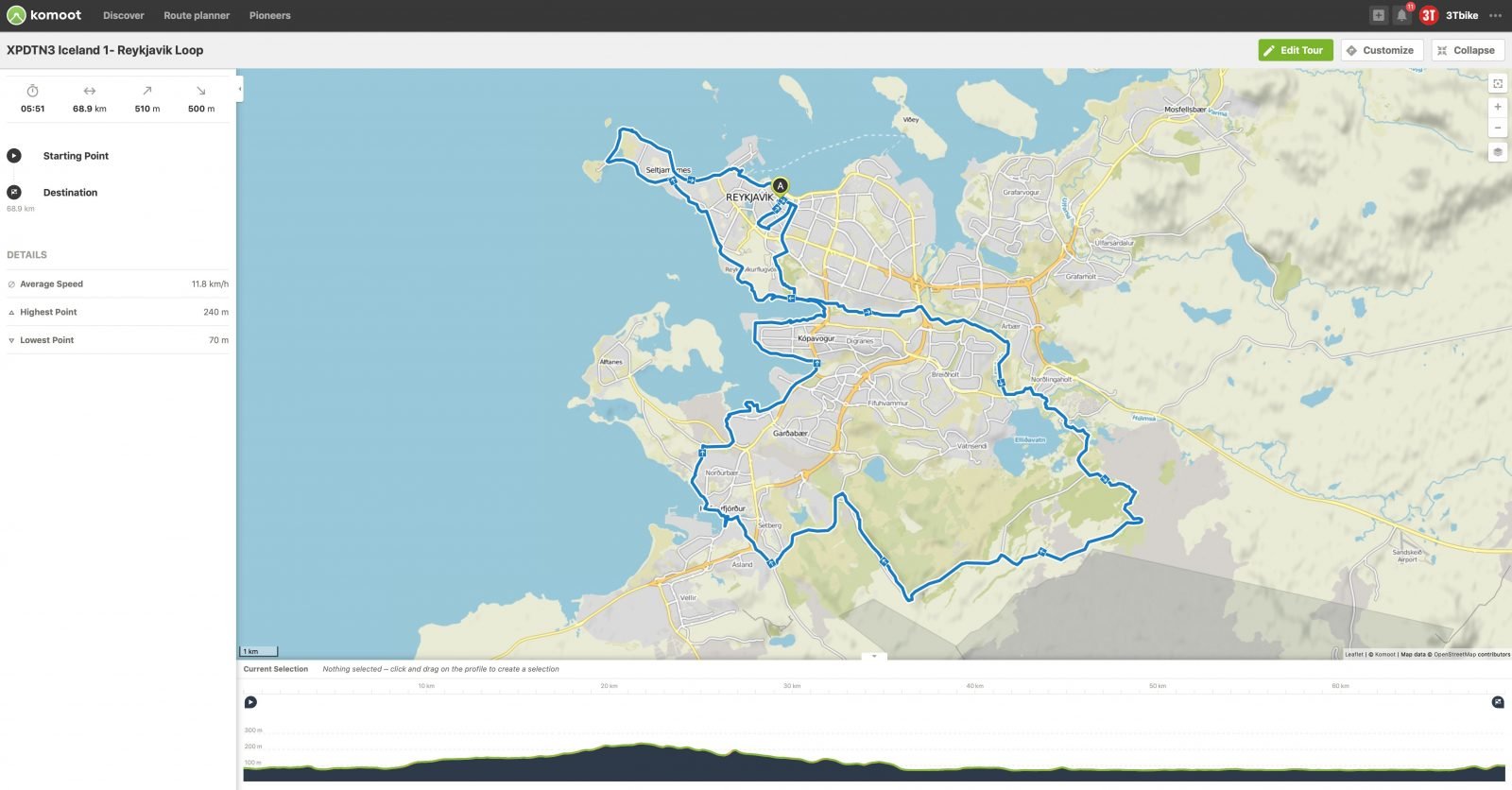 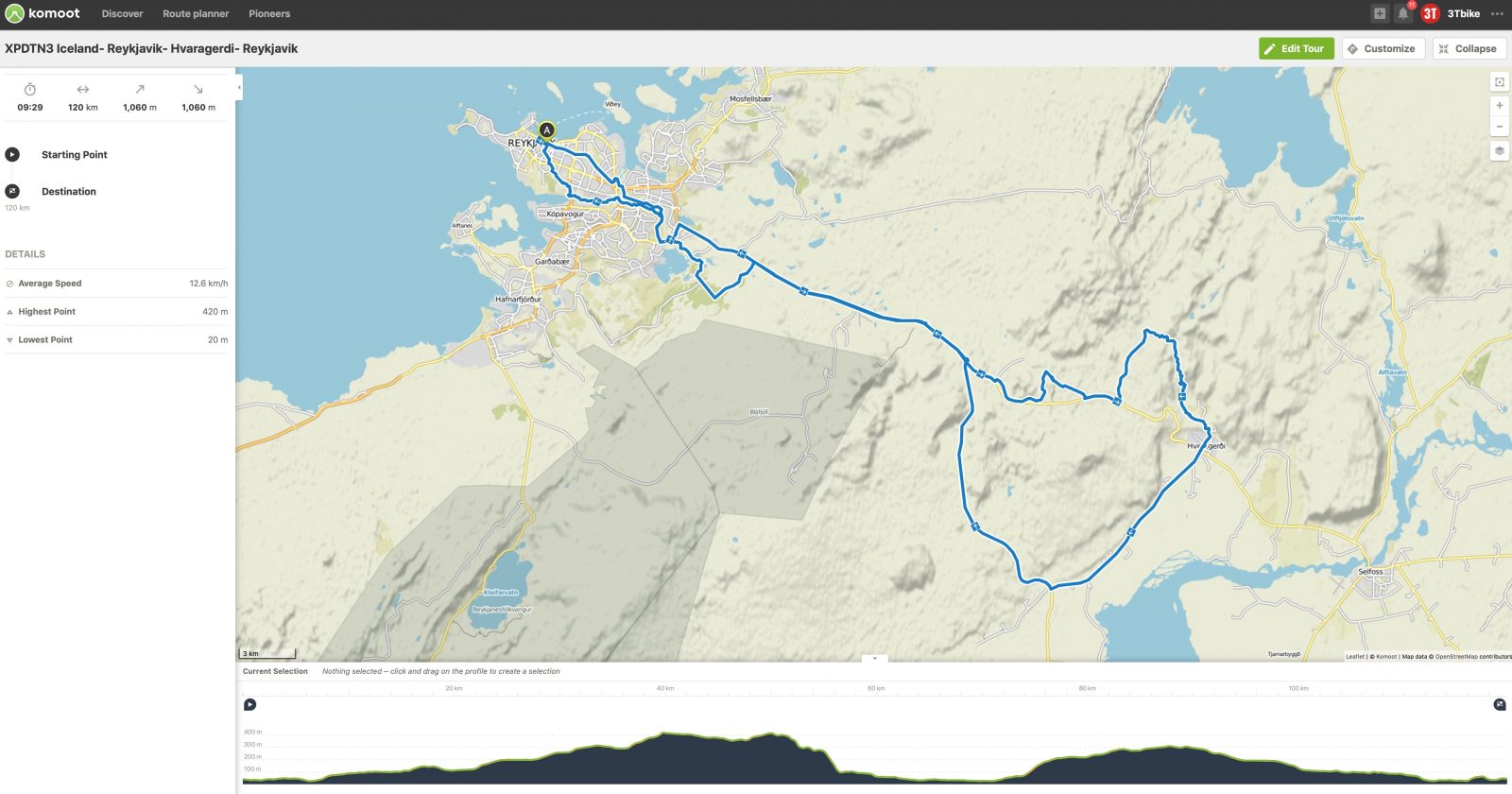 ◄ Previous Story XPDTN3: WESTFJÖRDS OF ICELAND
Next Story ► XPDTN3: GRAVEL & GRAPES IN LA RIOJA
Cookies help us deliver our services. By using our services, you agree to our use of cookies.Got itLearn more
...